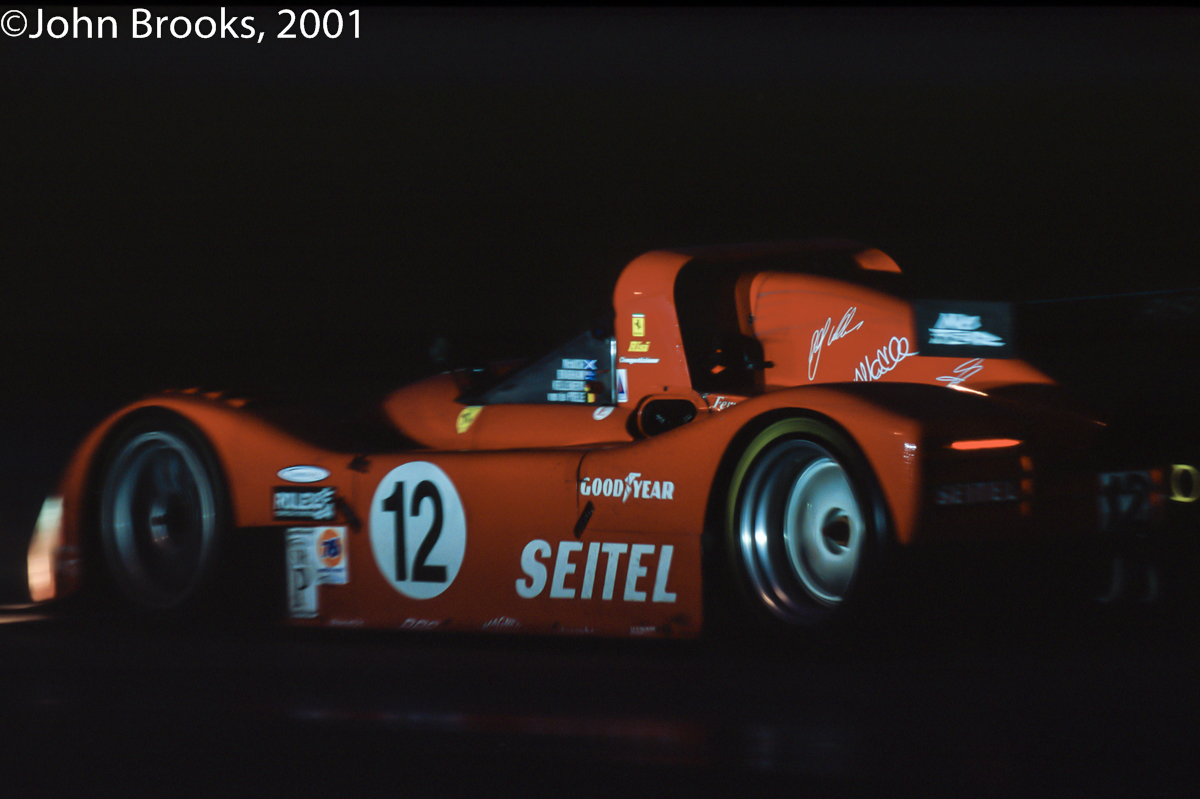 Another image of the 333 SP, this time shot during the 2001 Rolex 24. I wrote a while back about this race and had this to say about this fabulous car.

Perhaps the Ferrari 333 SP of Risi Competizione was the most popular choice for the top step of the podium at the race’s end. A hotshot team running the car, a driver line up that consisted of Ralf Kelleners, David Brabham, Eric van de Poele and Allan McNish plus the beautiful, sonorous Ferrari seemed to be the obvious selection. McNish has had his eye on a Rolex since winning his class in 1998 at Daytona, the year before the watches were awarded to all class winners not just the overall victors. Of course we are all too gentlemanly to ever mention this small omission in his career, maybe this would be his best chance to get hold of one the fabled timepieces. Fastest lap in practice of 1:41.118, if not in Qualifying, seemed to support the argument. 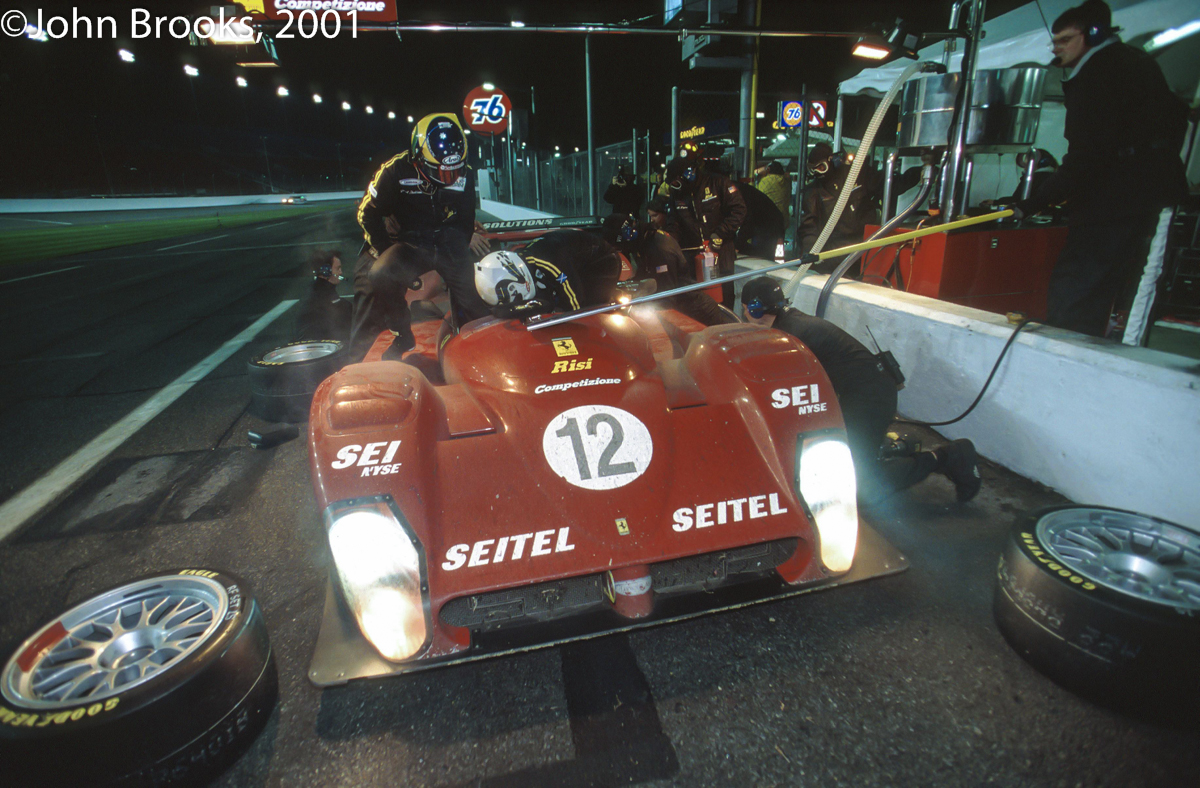 The race was run in conditions more often found at the Nürburgring than Daytona Beach, cold and grey to start then a deluge, most unlike Florida as we Brits imagine it to be sunny all the time.

More thoughts from the past…………

Most of the photographers showed good sense and stayed either in the warm, dry Benny Khan Media Centre or hid under awnings in the pits. Me? Well, Regis Lefebure and I headed out to the back straight, where we spent several hours trying make some sort of acceptable images in the murk. I reckon he got better results than I.

In this sort of dull stuff it is almost impossible to turn Chicken Shit into Chicken Salad. The 2001 Rolex 24 was a personal landmark for me, it was the last race that I shot entirely on film. By the time I crossed the Atlantic again to shoot the ALMS season opener at Texas I had acquired a Canon D30. Digital had arrived, that genie had escaped and things would be very different. Photographers would go on to be software operators, mind you the crap ones would still be crap. 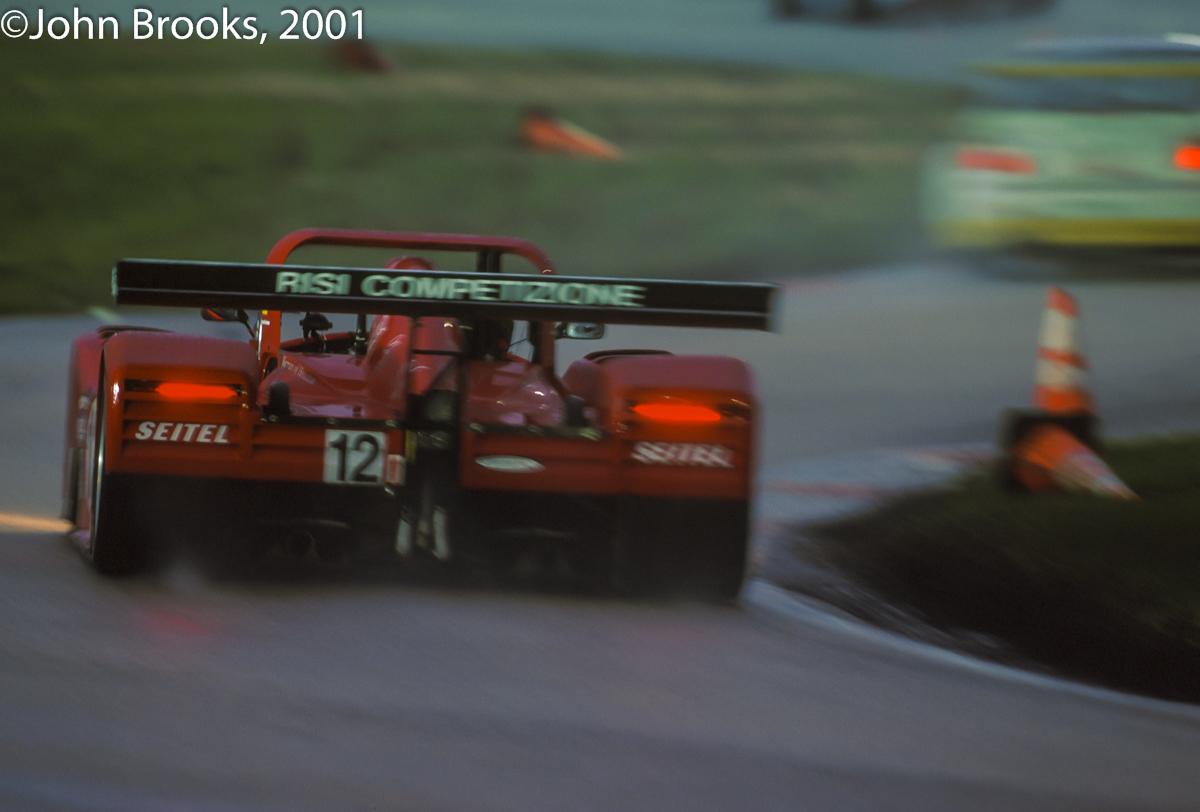 Out at the head of the race #12 and #16 continued to swap the lead. Then Risi Competizione took their turn on the wheel of hard fortune. Out on the back straight McNish lost a front wheel due to lug nut seizing. Fixing this problem cost five laps and probably the race. This diagnosis was confirmed a few hours later, just before dawn. During a routine pit stop it was noticed the oil temperature was rising rapidly, it was suspected that head gasket had failed in the V12. The Ferrari was reluctantly retired, another leader down and no Rolex for McNish.

The race was a cold miserable affair, only the performance of the Corvette team gave any kind of pleasure, they were, and still are, a class act.

One pleasing aspect is that the top picture ran as a double page spread in European Car, I have to say it was a satisfying way to say farewell to exclusively shooting film.