Up early one recent Saturday and onto the train bound for Manchester Piccadily. There the Special Correspondent and I met up with David Lister, the photographers’ photographer. He chauffeured us over to Trafford Park for “Passion & Power”. It was a great little show, well worth a visit when it comes round next year. The Special Correspondent casts his eye over the ingredients and comes up with his customary tasty automotive bouillabaisse. 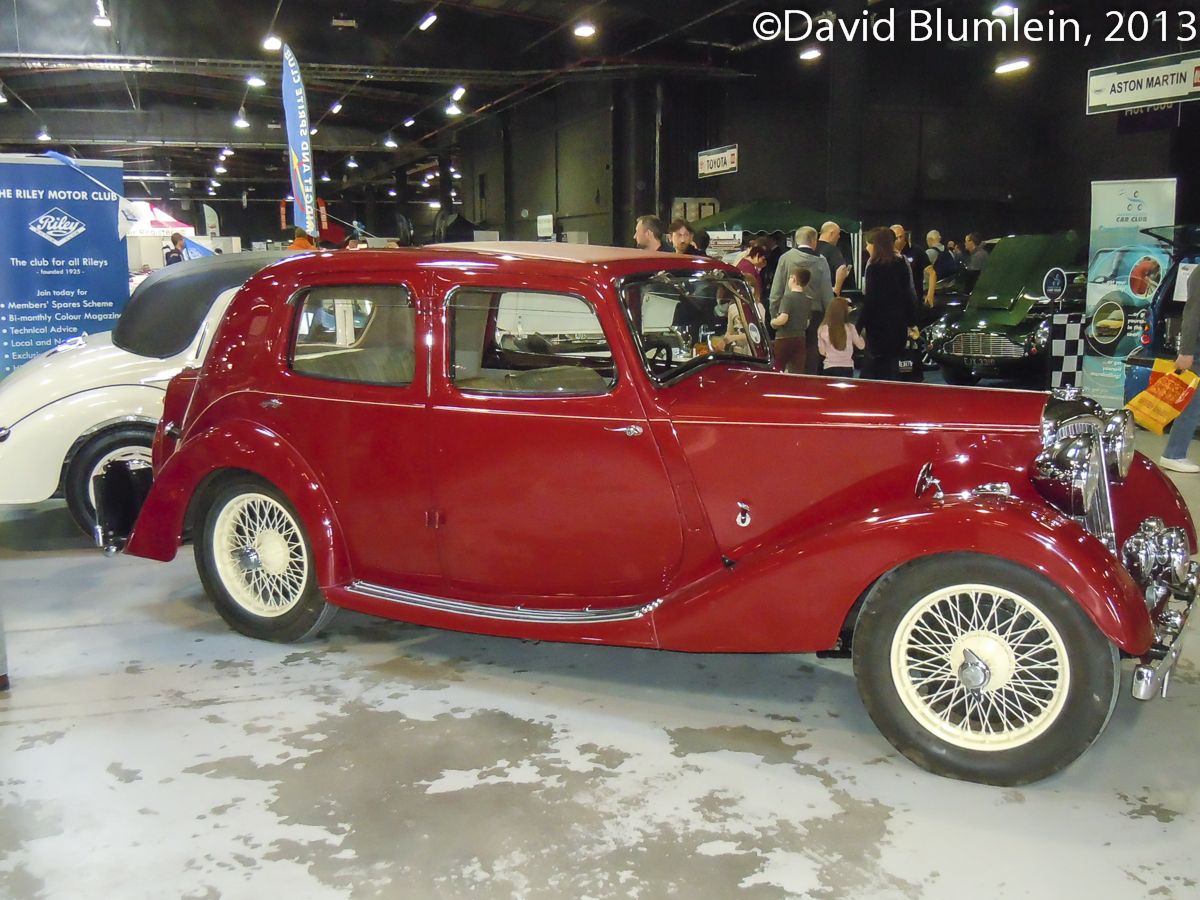 1937 Riley 1.5-litre Touring Saloon
By the late Thirties Riley, like Triumph, were offering a wide range of different models. The Touring Saloon was one of the range of 1.5-litre 4-cylinder cars and was distinguished by having an extended luggage boot, not so usual in pre-war cars. The engine was the classic Riley unit with two high-mounted camshafts in the block as devised by Percy Riley for the 1087 c.c. Nine in 1926; it had been re-designed with a similar layout by Hugh Rose as a 1.5-litre for the new 1935 range. 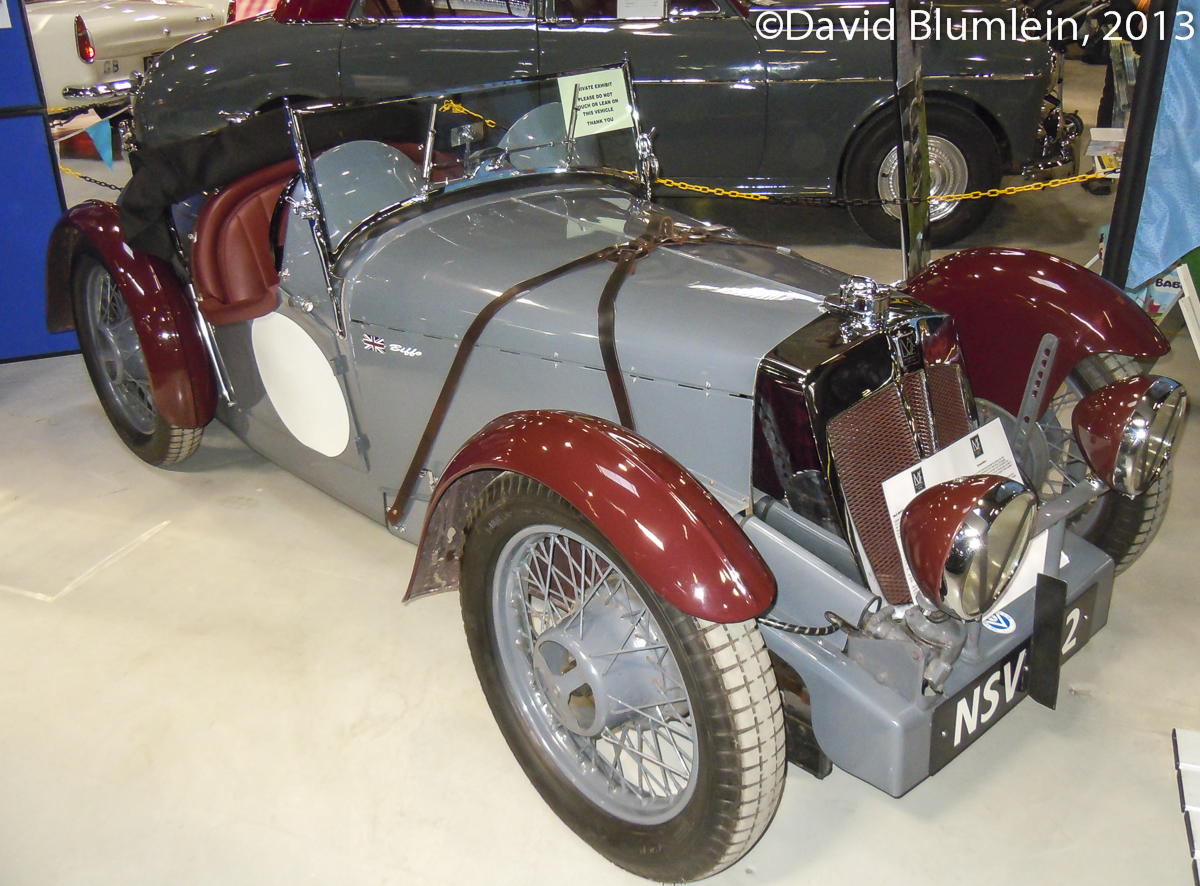 Vale Special
These little sports cars were made in Maida Vale from 1932-35. They used an 832 c.c. Triumph Super Seven engine, and its underslung frame and consequent low centre of gravity gave it excellent roadholding. In 1935 a 1098 c.c. Coventry-Climax engine was fitted. This car is no. 25 of 100 cars made. Ian Connell raced a supercharged version in 1935. 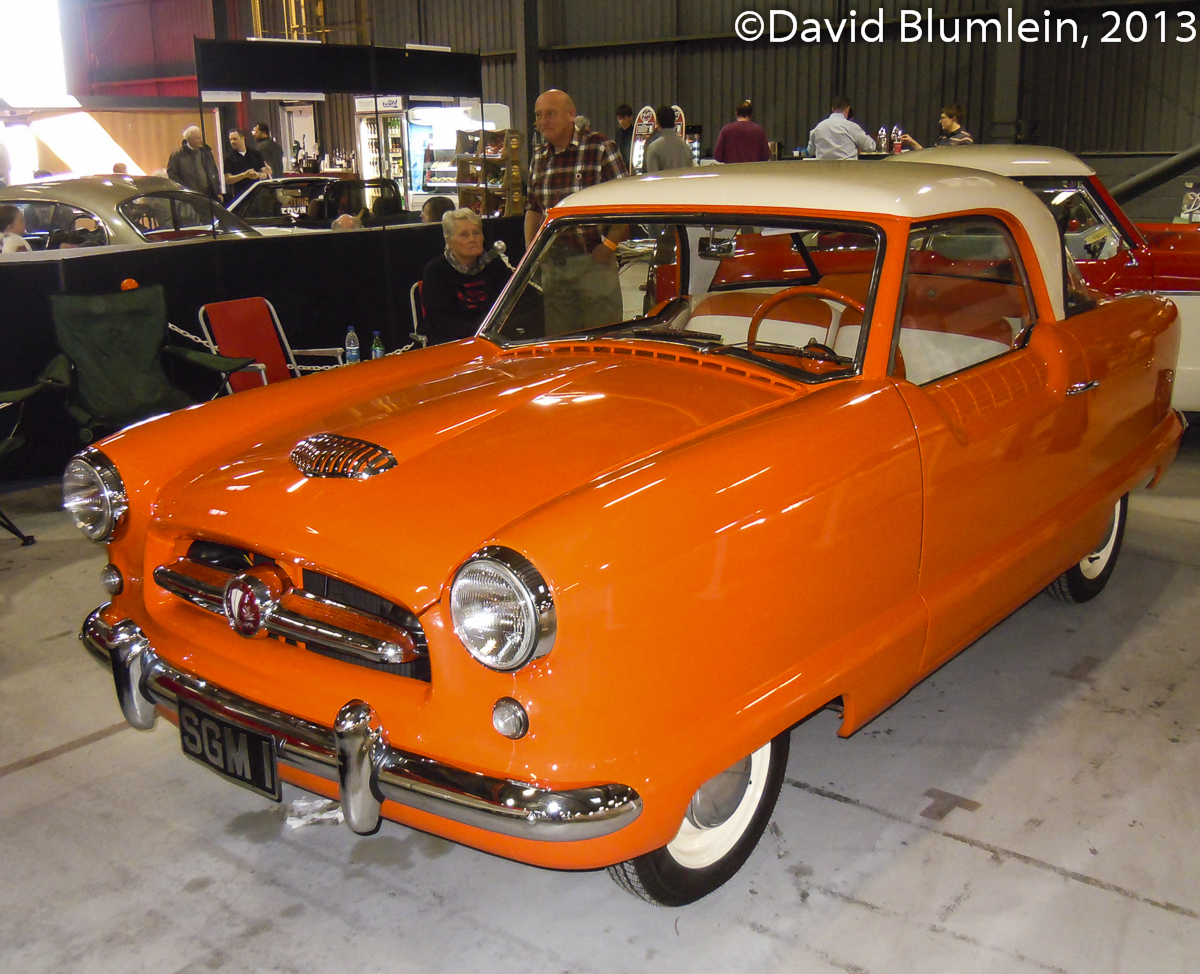 1954 Hudson Metropolitan
Based on a Nash prototype of 1950 called the NX1, this sub-compact car was put into production in 1954 by Austin at their Longbridge, Birmingham factory. It had a unitary construction convertible or coupé body and an Austin A40 4-cylinder o.h.v. engine initially of 1200 c.c. but in 1956 of 1489 c.c. The cars were at first for export to America only but became available in Britain from 1957. Known mainly as Nash Metropolitans some were sold as Hudsons; Hudson had merged with Nash in May 1954 to form the American Motors Corporation. The car was popular and was intended as a rival to imported European cars such as the VW Beetle – up to 97,000 Metropolitans were sold by 1961. 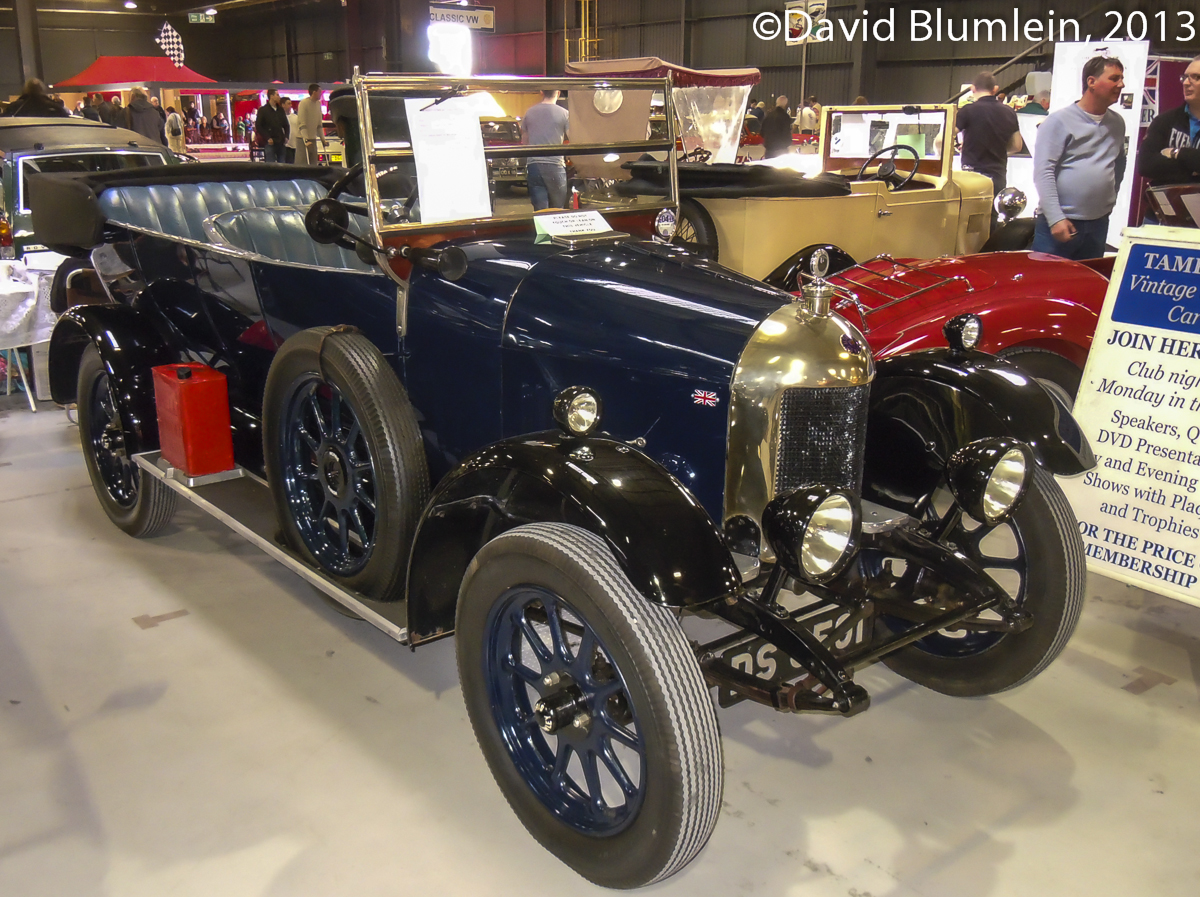 1924 Morris Cowley
It is entirely appropriate that the Show should contain a Bullnose Morris – 2013 represents the centenary of Morris car production which began with the 2-seater Morris Oxford in the Cowley works on the south west side of the city of Oxford. Some 11.6 million cars of various sorts have emerged so far from the site and BMW continues to produce the majority of Minis there to this day. William Morris soon realised the limitations of his original Oxford model having only two seats and planned a 4-seater version which would appeal much more to the family man. This was the Cowley although after the First World War the Cowley tended to be the more basic of the two Morris models. 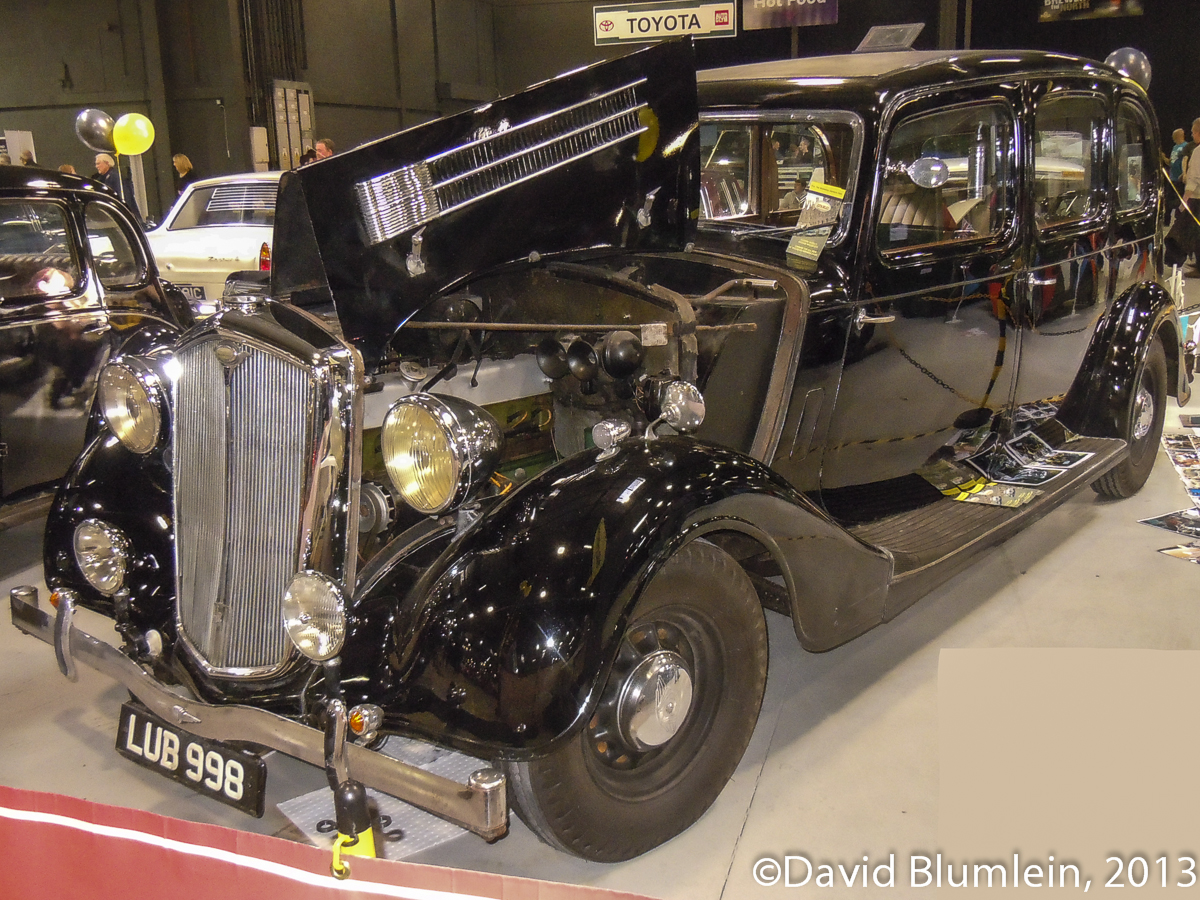 1948 Wolseley 25 Limousine
When William Morris bought Wolseley in 1927, he inherited their overhead camshaft engine designs, which were influenced by Wolseley’s First World War experience of building large numbers of the excellent Hispano Suiza V8 aero engines; these Viper motors had their overhead cams driven by vertical shafts. Morris used the Wolseley layout for his early Minors, M.G. sports cars and Wolseleys but by 1935 Nuffield rationalisation was taking over, instigated by the controversial Leonard Lord, and Morris and Wolseley cars had to settle for pushrod o.h.v. engines across the board while the Minor had gone side-valve! 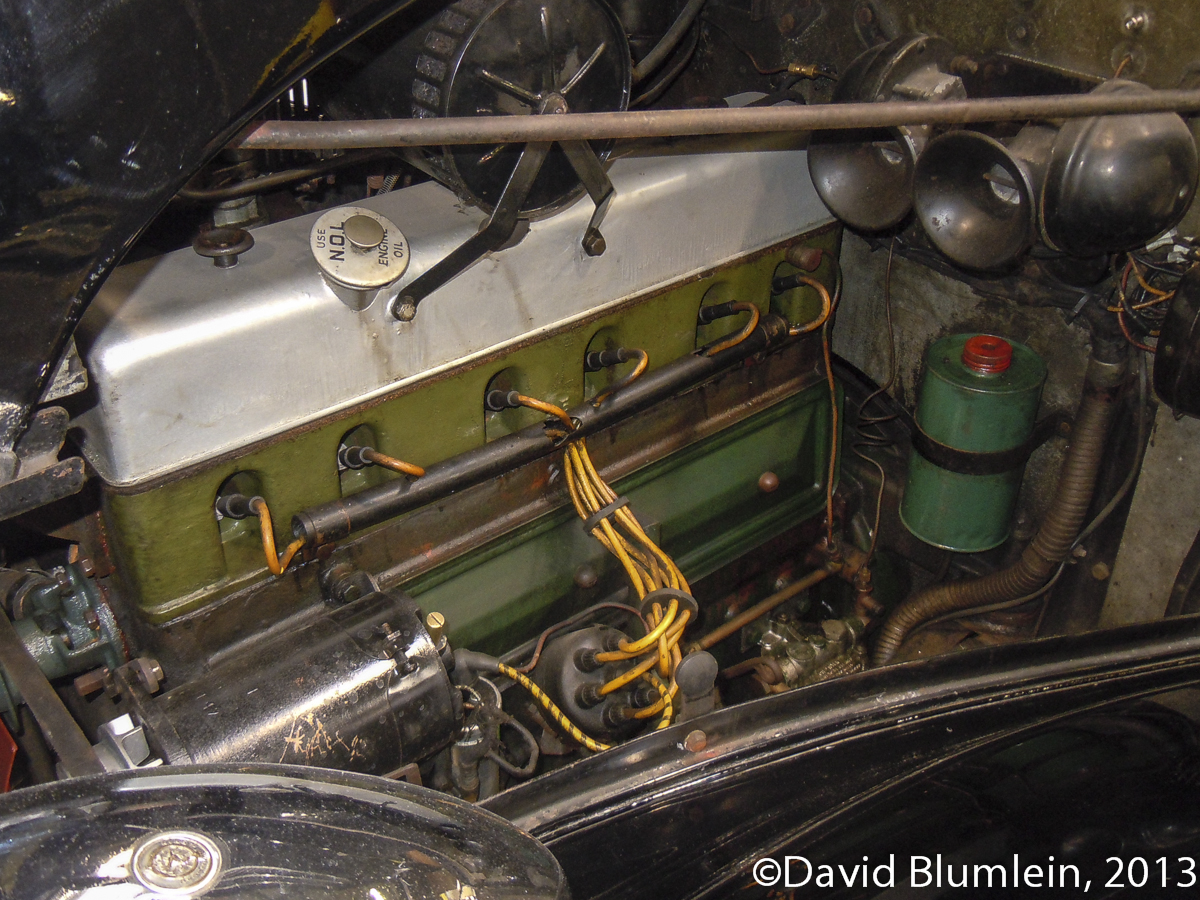 The biggest Wolseley made from 1938, the 25, used a 3485 c.c. 6-cylinder o.h.v. engine based on a Morris Commercial unit. Very few limousines were made up to 1948 when the completely new monocoque 6/80 and 4/50 models were introduced, surprisingly with overhead cam engines! 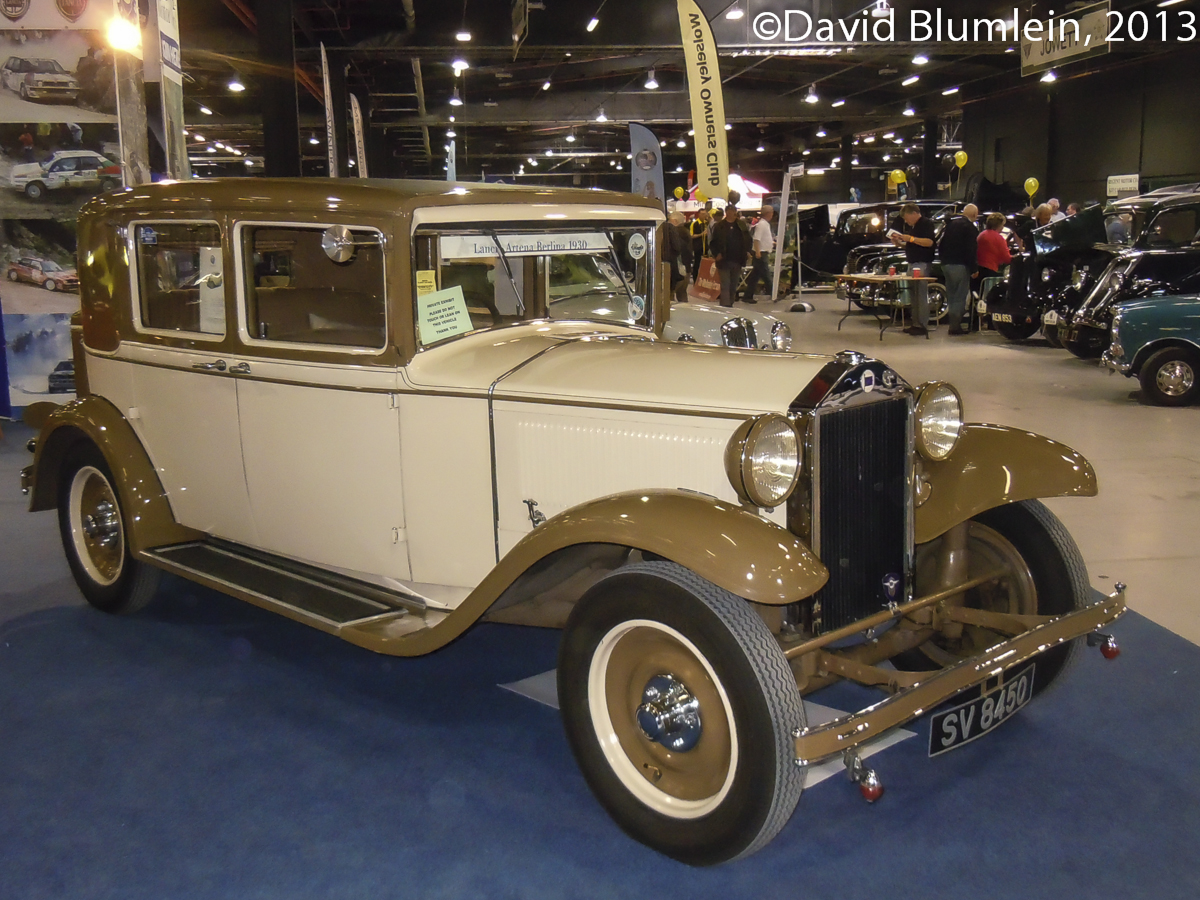 1931 Lancia Artena
When Lancia needed to replace the outstanding Lambda, it was decided to offer two models: the 1924 c.c. V4 Artena and the 2604 c.c. V8 Astura. The Artena’s engine was a very narrow V4 and the car had a box-section chassis with the familiar Lancia sliding pillar independent front suspension, a layout used extensively these days only by Morgan. By 1939 the Artena was only made as an army staff car or a light van chassis. 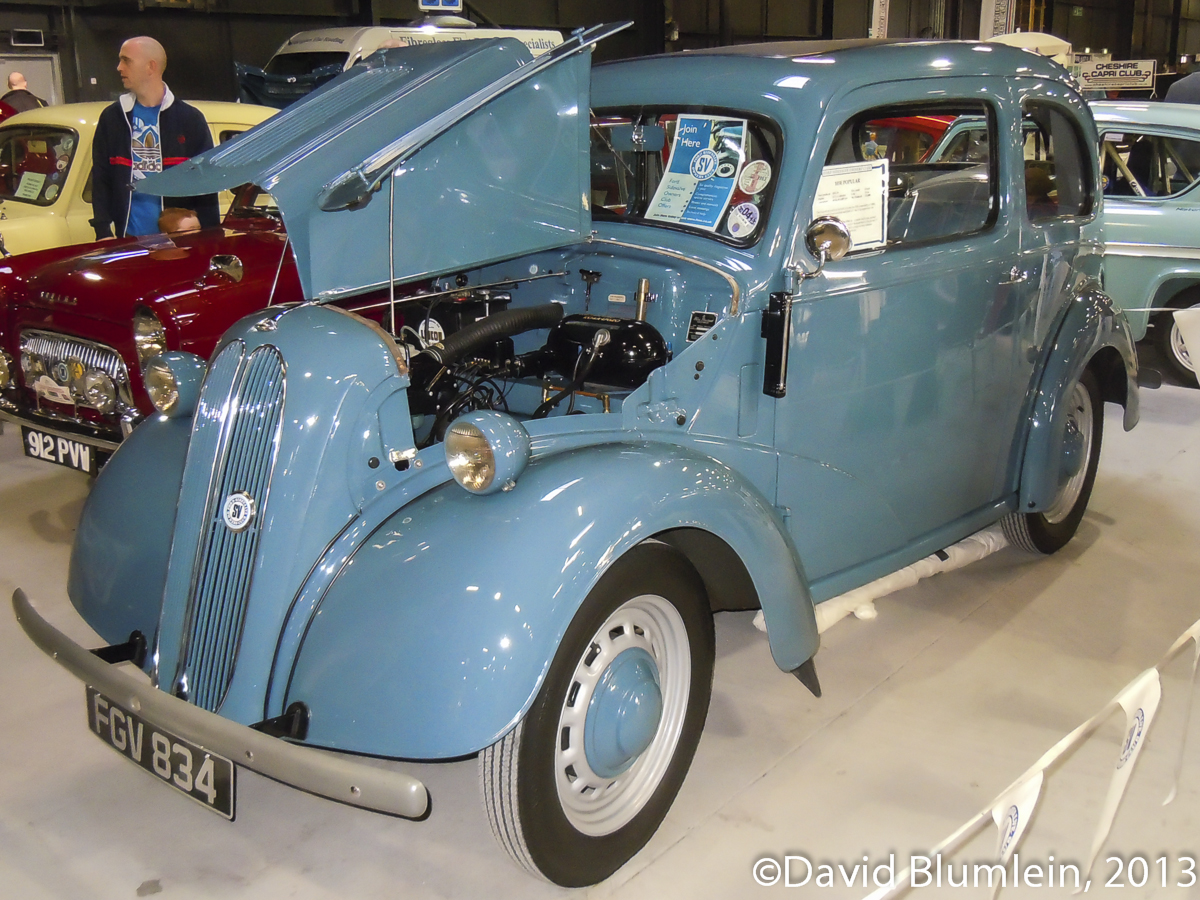 1953 Ford Popular 103E
The last of the upright “sit up and beg” cars from Ford. When introduced in 1953 it was the cheapest full-size car in Britain and consisted of the E494A Anglia stripped to bare essentials and given the 1172 c.c. 10 h.p. engine from the discontinued E493A Prefect. It was the last British car to have a side-valve engine and when production stopped at Ford’s Doncaster factory in 1959, some 155,000 had been made.
Some local cars: 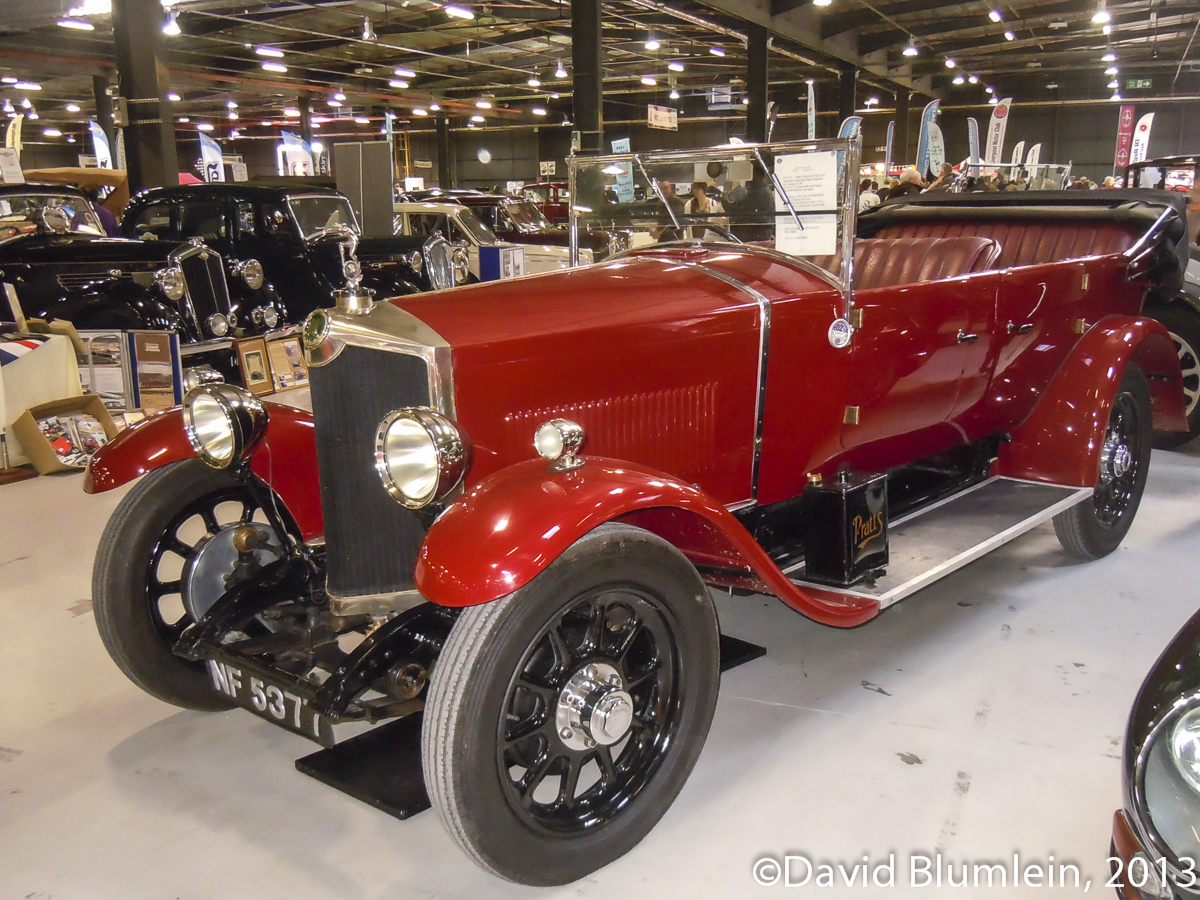 1927 Crossley 3-litre
Introduced at the 1925 Olympia Show, this was an important model for Crossley whose main factory was at Gorton in Manchester and whose reputation for making tough reliable cars was forged during the First World War with their RFC s. It was their first 6-cylinder car and had an o.h.v. engine of initially 2.7-litres and from 1928 of 3.2-litres: 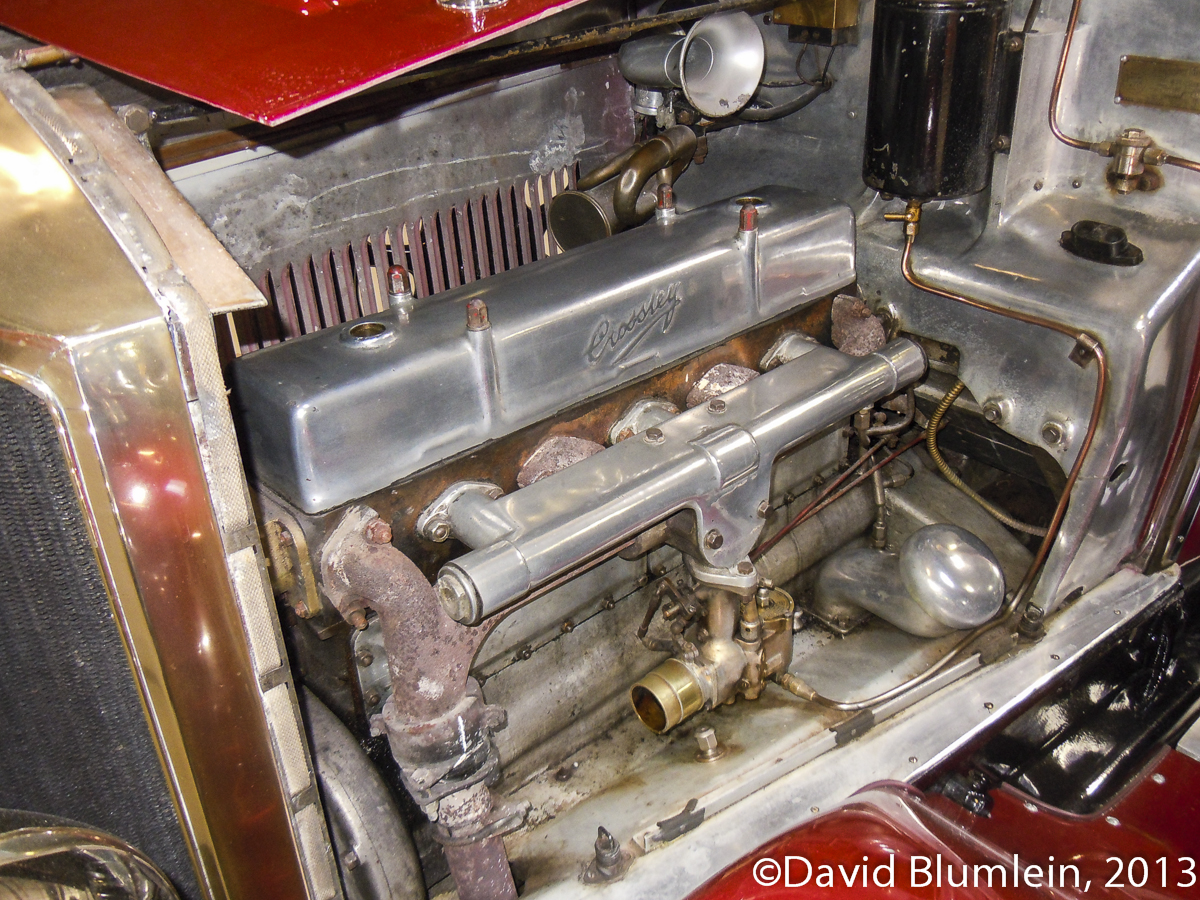 As part of its development programme the prototype was subjected to a continuous 24-hour test run at the banked Sitges track in Spain, a venue only ever used for racing in 1923! Among notable clients were the Duke of York and the Prince of Wales. 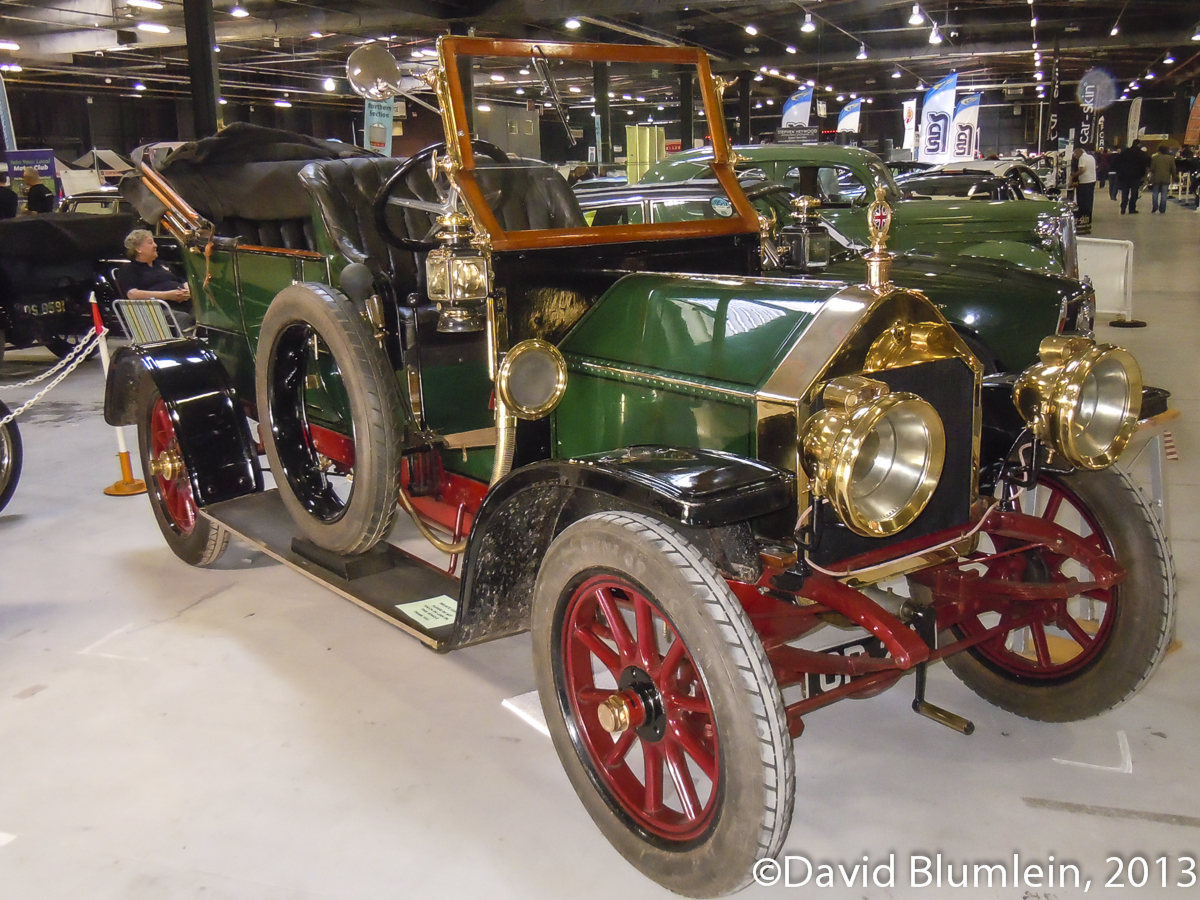 1910 Rothwell 20 h.p.
The Rothwell brothers made cars in the early 20th century in Oldham, Lancs. Their most successful model was this 20 h.p. which had a big 4150 c.c. 4-cylinder engine with dual ignition and bodywork built on the premises. About 60 Rothwells were made in all and production ceased in 1916.
TAILPIECE 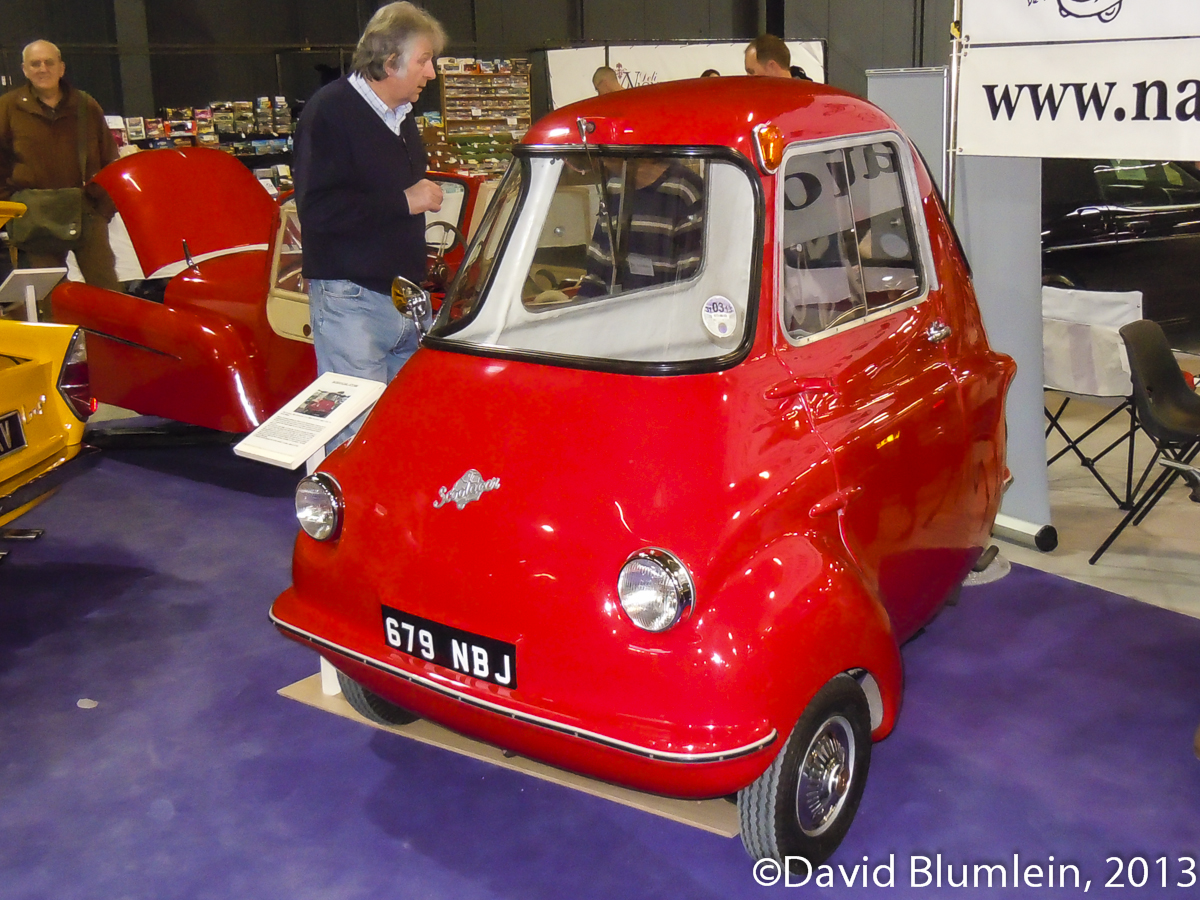 No, not a Peel but a slightly bigger Scootacar, dating from 1962 and made by an offshoot of the Hunslet railway locomotive company in Leeds. A single passenger could sit astride the engine cover which housed the 197 c.c. 2-stroke single-cylinder Villiers motor. Less than 1000 were made by 1964 when microcars were falling out of fashion. 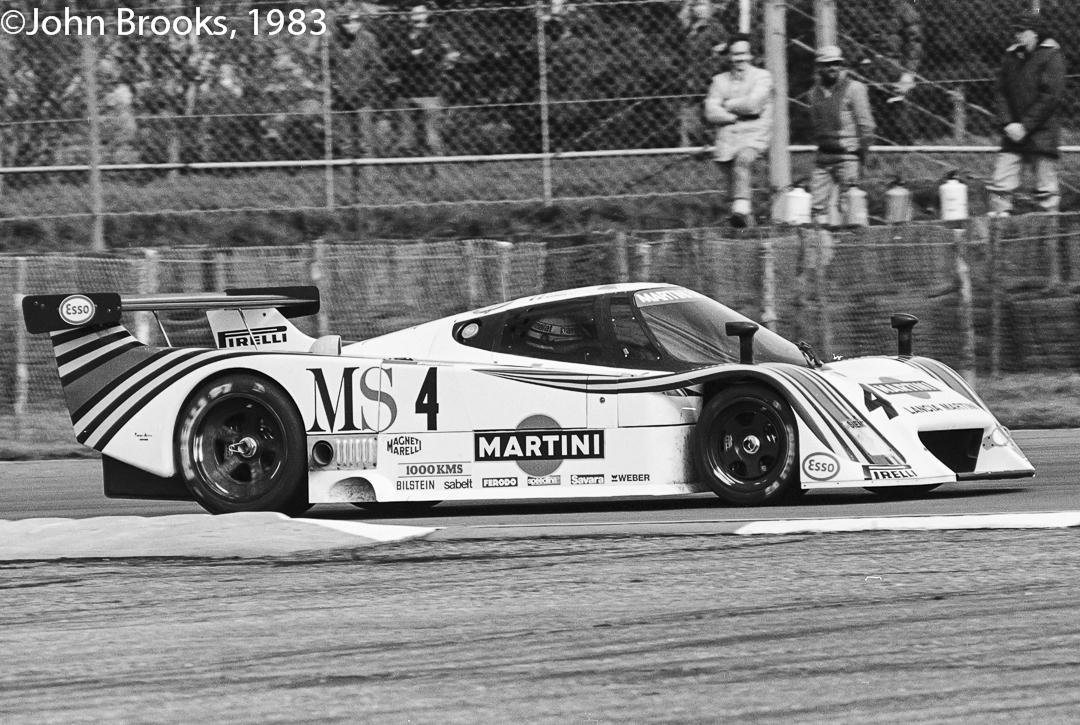 Arguably one of the most elegant endurance racers of them all. The suave Martini livery disguising the brutal Ferrari V8 turbo lurking within. The results never matched the promise, but those of us lucky enough to see the LC2 in action remember them with great affection, like a distant love affair from the time when we were young………………an eternal question, what might have been? 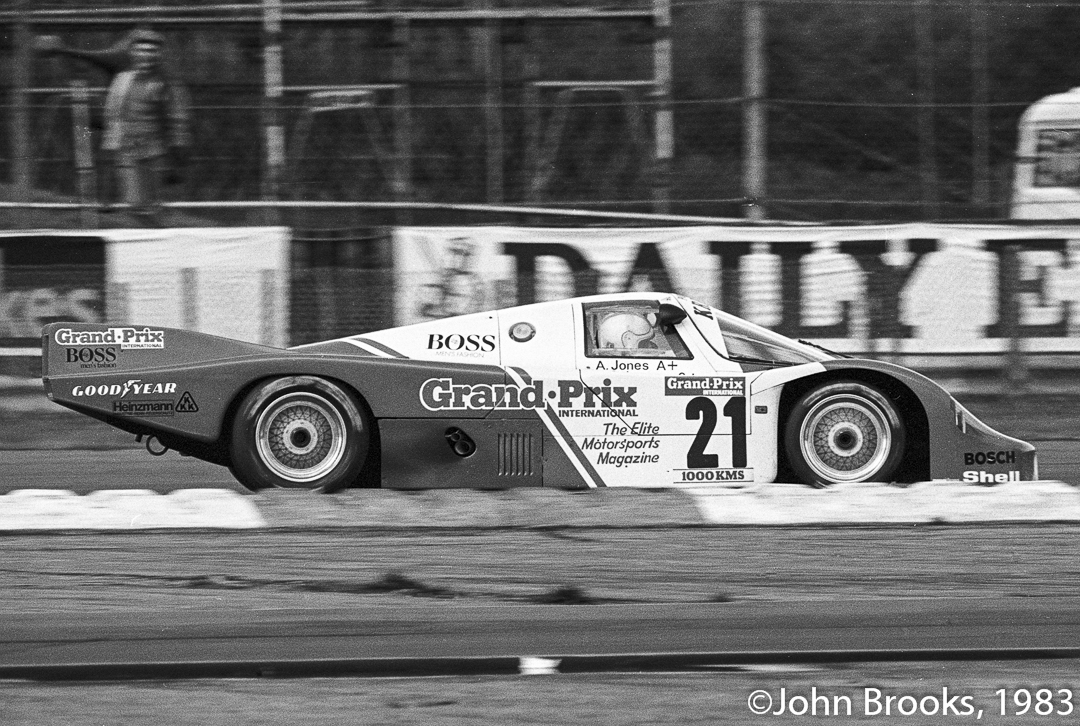 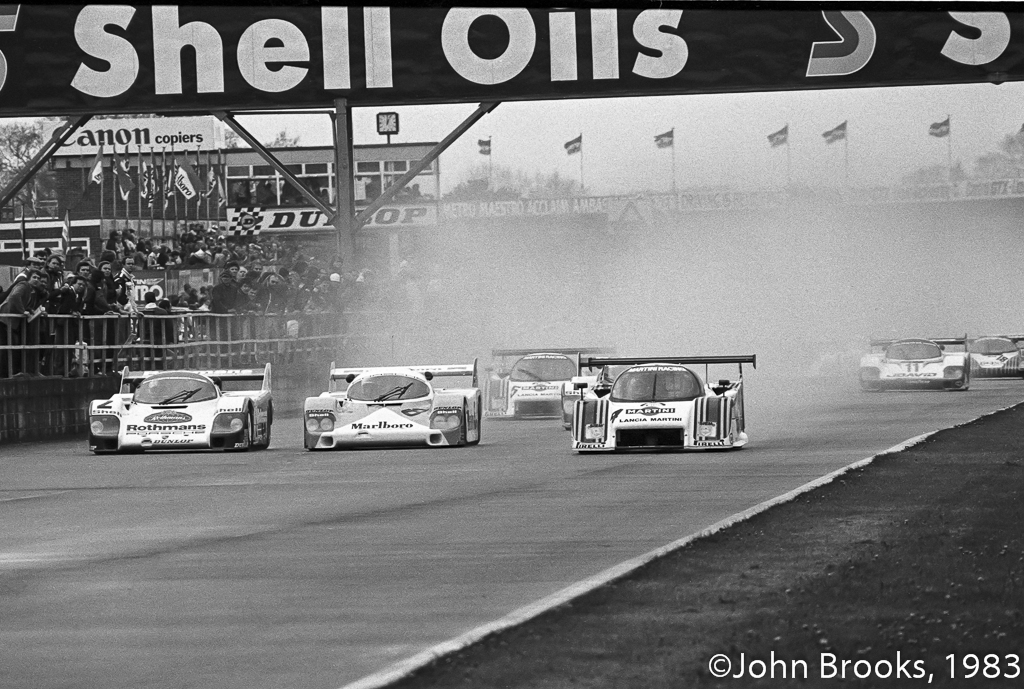 1983 and the start of the 1000 Kilometres of Silverstone. Michele Alboreto in the Martini Lancia LC2 is slicing past the fag packet Porsche 956s of Derek Bell and Bob Wollek…………………a happy time, almost all of our vices on display. 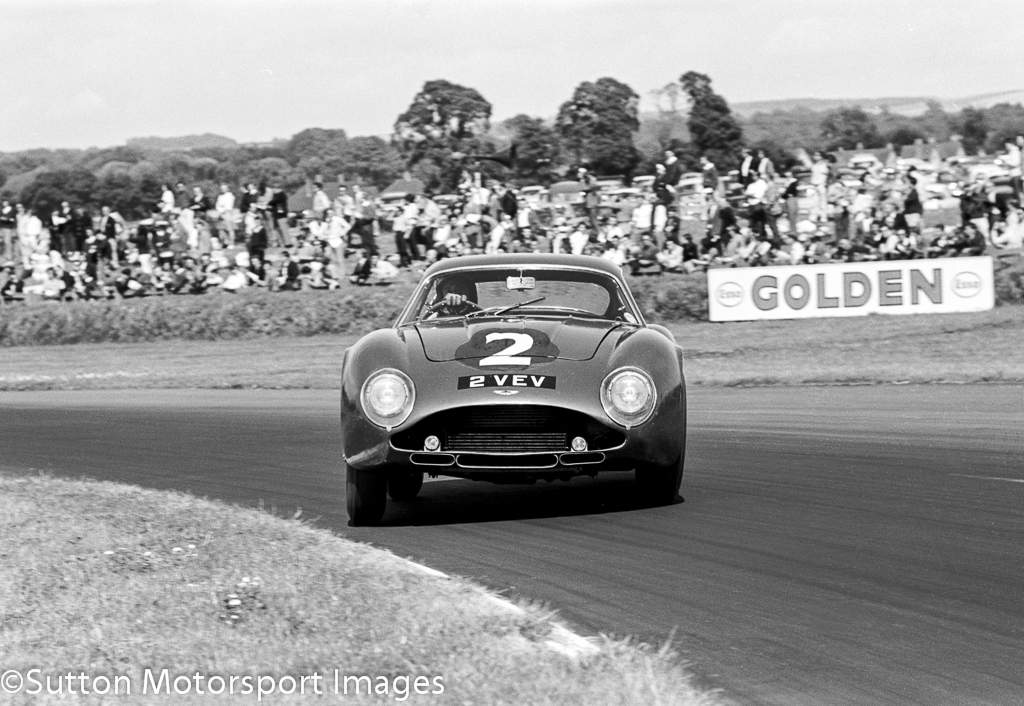 45 years ago today one of the greatest drivers of all time, Jim Clark, was killed at Hockenheim.

” A disk jockey on a radio station in far away Los Angeles said: “If you are mourning the death of the great driver, Jim Clark, put on your headlights.” The whole freeway lit up at midday.”