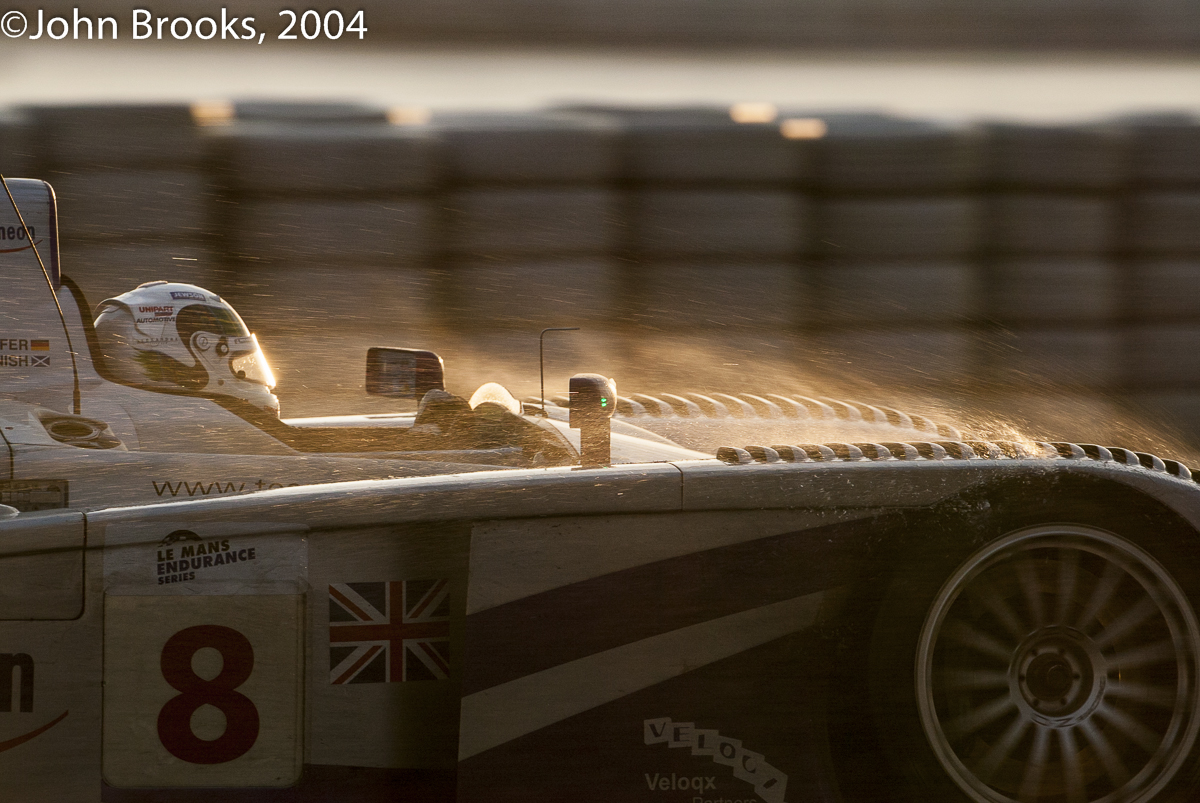 The Nϋrburgring is chiefly remembered for the many outstanding  Grands Prix races that took place over its unparalleled Nordschleife, a driver’s circuit if ever there was one, and it is not surprising that some of the greatest talents of all shone there e.g. Nuvolari in the P3 Alfa Romeo in 1935, Fangio in the 250F Maserati in 1957 and Moss in the Lotus 18 in 1961. With such performances as these is it any wonder that the circuit has tended to be associated with the single-seater racing car?

And so it has not been thought of as a natural home for long distance enduring racing, although its early Grands Prix were ironically run for sports cars, mainly because Germany had no suitable Grand Prix contender and because Mercédès had just joined up with Benz and the new combine was intent on getting on with their new 6-cylinder S, SS and SSK supercharged sports cars designed by Dr Ferdinand Porsche and Max Wagner.

Sports car races supporting the Grands Prix events, yes, but nothing really serious until 1953 when the Nϋrburgring hosted its first 1,000km race as a round of the newly created World Sports Car Championship. This 1,000km race steadily became a permanent fixture ( with hiccups in 1954 and 1955 ) and as the Sixties unfolded a 12-Hour Touring Car race joined in, providing BMW and Jaguar with two wins apiece. Then, as the Liège-Rome-Liège/Liège-Sofia-Liège rally, the Marathon de la Route, was forced  off the roads of neighbouring countries, it found refuge in a series of real endurance events around the Nϋrburgring as 82,84, 86 and 96 Hour marathons between 1965-71.

By this time endurance racing was firmly in the Eifel blood and in 1970 the 24 Hour race was instituted. With gaps in 1974/75 owing to the oil crisis and 1983 when the reconstruction was being carried out, this wonderful event has been run ever since and long may it continue! One of its great attractions is the way it is not limited by constraints of championships in the breadth of its varied entry. Le Mans has long forsaken all those varied capacity classes which made its fields so very rich and interesting – not so the Nϋrburgring 24 Hours: lots of classes to accommodate all sorts of runners and sufficient factory interest nowadays to give the event big importance.

The top runners get all the media attention in the motoring press so here are some of those others who took part in 2011. There were 198 starters and 783 drivers! 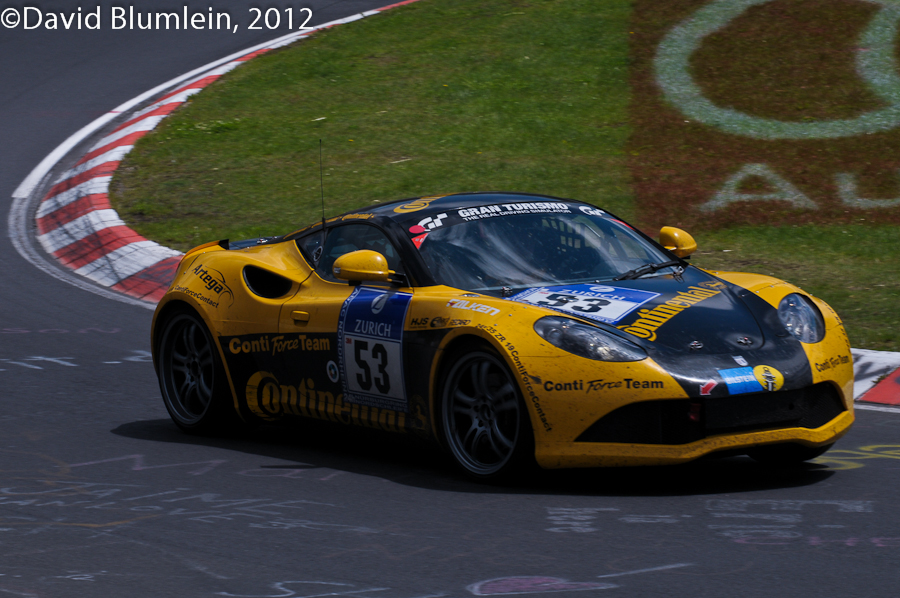 Welcome to the Artega GT, a new German sporting car with a 3.6-litre V6 engine mounted midships. Designed by Henrik Fisker, it is built in Delbrück in northern Germany. The car finished the race in 70th position. 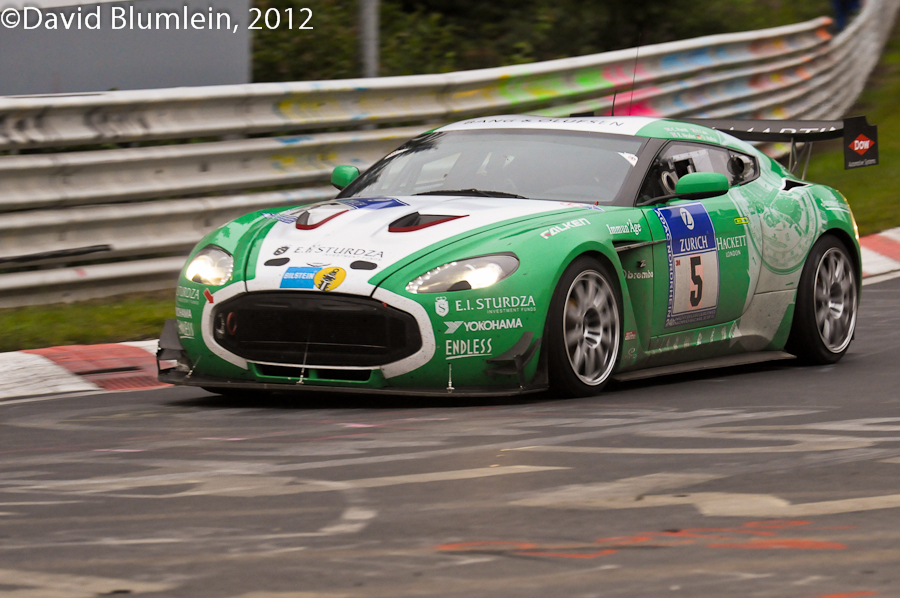 Aston Martin constructed two prototypes of their forthcoming Zagato model – this one is nicknamed “Zig” and encountered many delays but finished 111th. 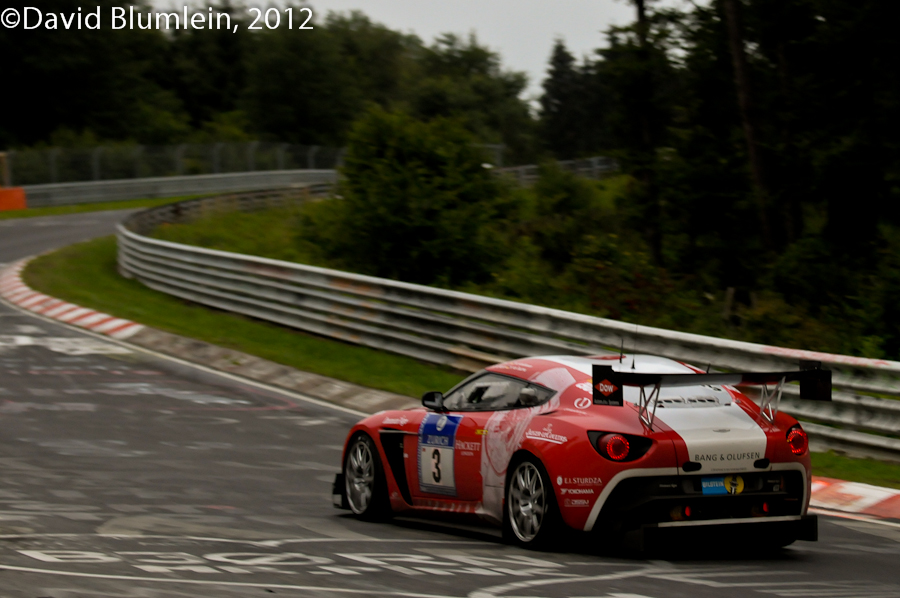 And this is “Zag” powering out of the Pflanzgarten to finish 89th. In the background is the spot where poor Peter Collins came to grief when his Ferrari Dino ran wide during the 1958 German Grand Prix, throwing him out against a tree. 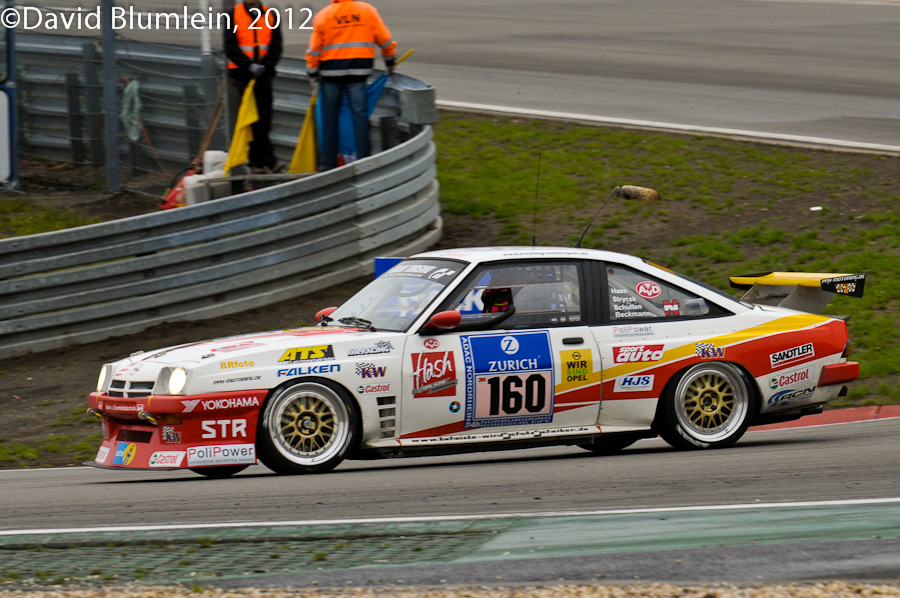 The rules require all entries to be less than ten years old but special dispensation was given to this Opel Manta which managed a noble 129th! 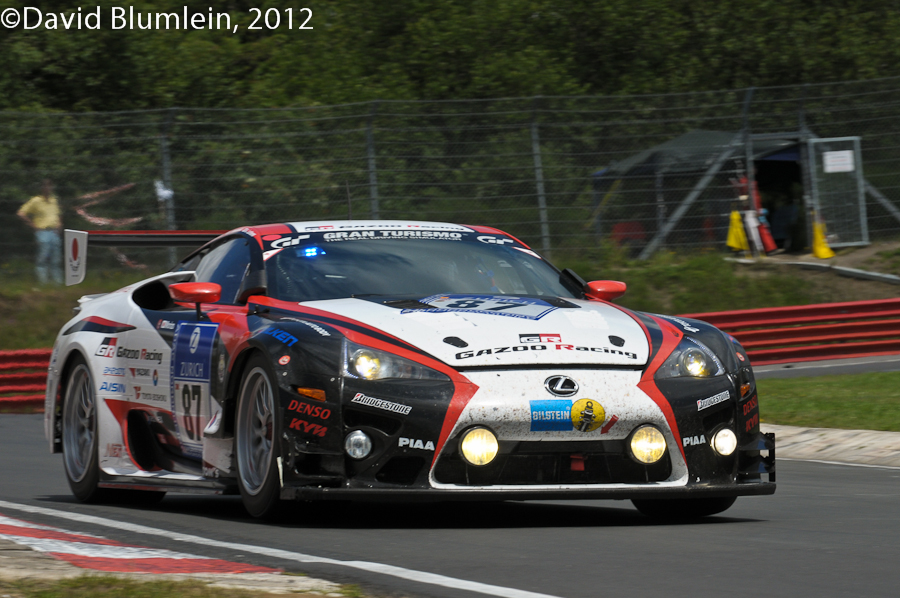 Lexus by their own admission treat the race as the “best possible test session” for their LF-A. In 2010 the test session yielded a class win – no such luck in 2011! 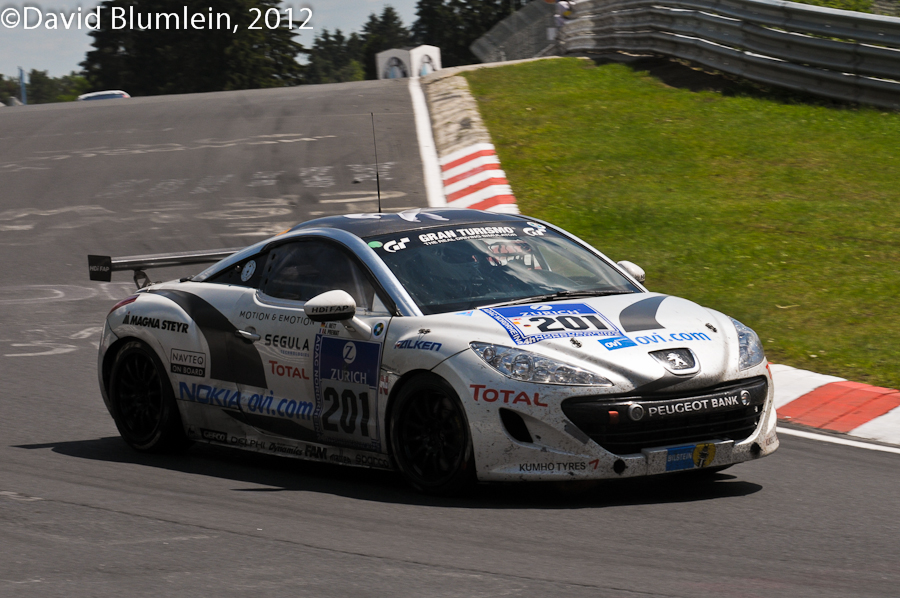 This is the only surviving Peugeot RCZ HDI but it did win its class. 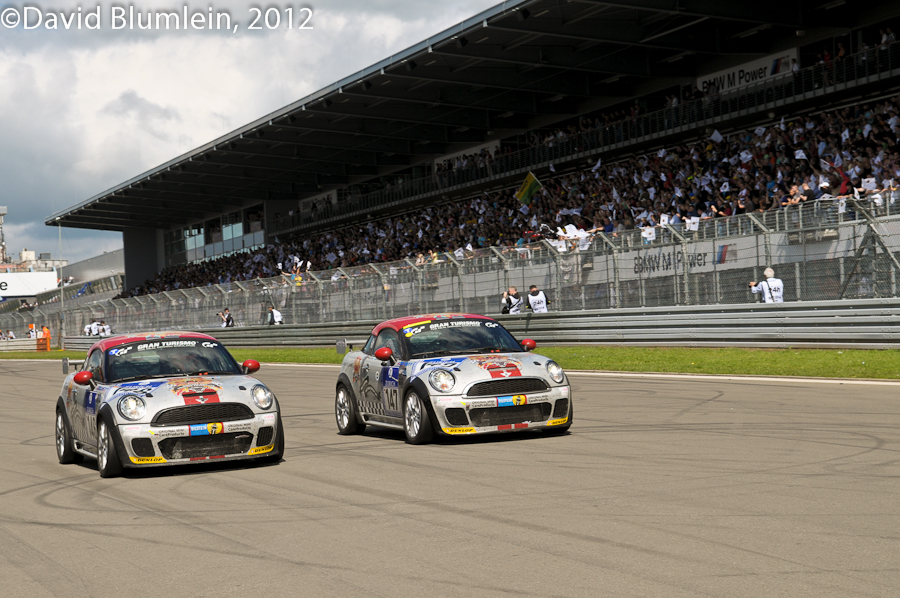 There seemed to have been very little notice taken by the media outlets of the new Mini Coupé which was after all making its first public appearance prior to its formal launch two months later. Here are both cars finishing. 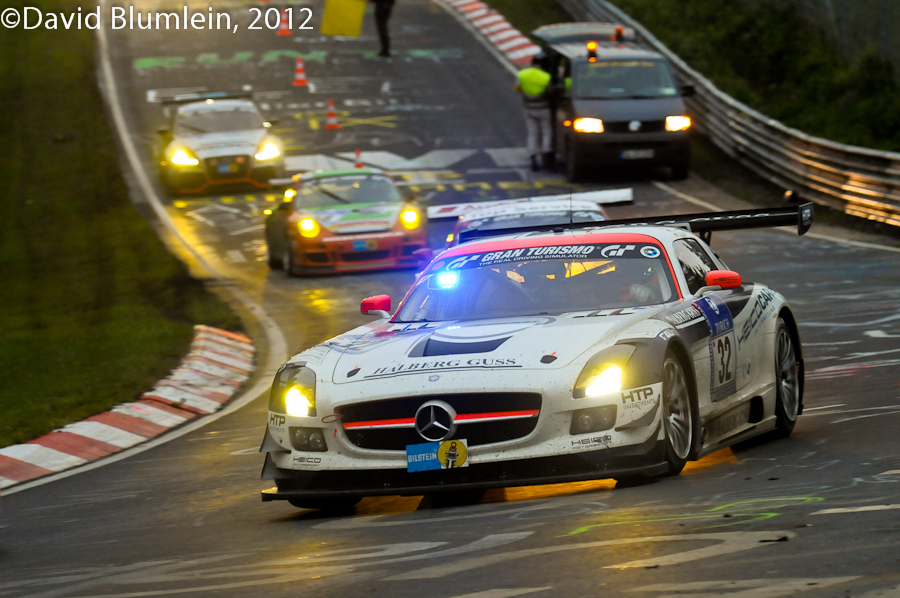 The Nϋrburgring has a very sensible way of coping when a car strikes the barrier – they simply cone off half of the track where the trouble is, carry out the rescue and repair work, all without the need for safety cars. Meanwhile marshals ensure that the cars on the track simply slow down sufficiently as they pass through the restriction and then resume racing straight after.

Here the Heico Motorsport Mercédès-Benz leads a group of cars out of the restricted section on its way to 7th overall.

Perhaps others could learn from this.

There is something very special about being at the Nürburgring when the winner of the race is a Mercédès-Benz. 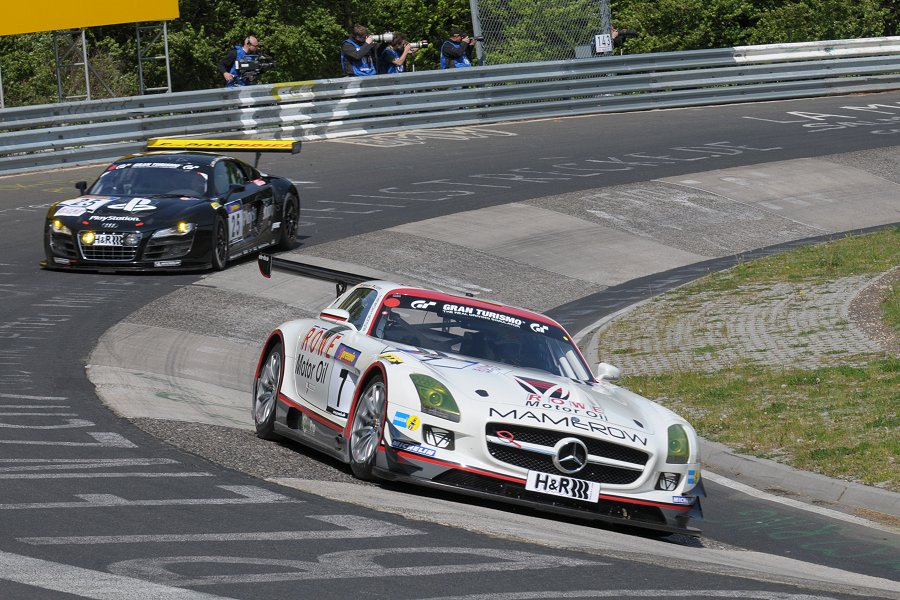 One recalls the company’s first post-war win on the Nordschleife in 1952, when a team of four 300SL models (uniquely in open form just this once) dominated the sports car race which accompanied the German Grand Prix that year. These cars had a close affinity to the current SLS AMG GT3 cars, as Engineer Rudi Uhlenhaut had been given permission by the Daimler-Benz board to create a sports car provided that it made as much use as possible of parts from the production 300 Saloon. The resultant car did admittedly have a space frame but it evolved a year or so later into the famous production gullwing 300SL Coupe which was as much a GT as anything at the time. 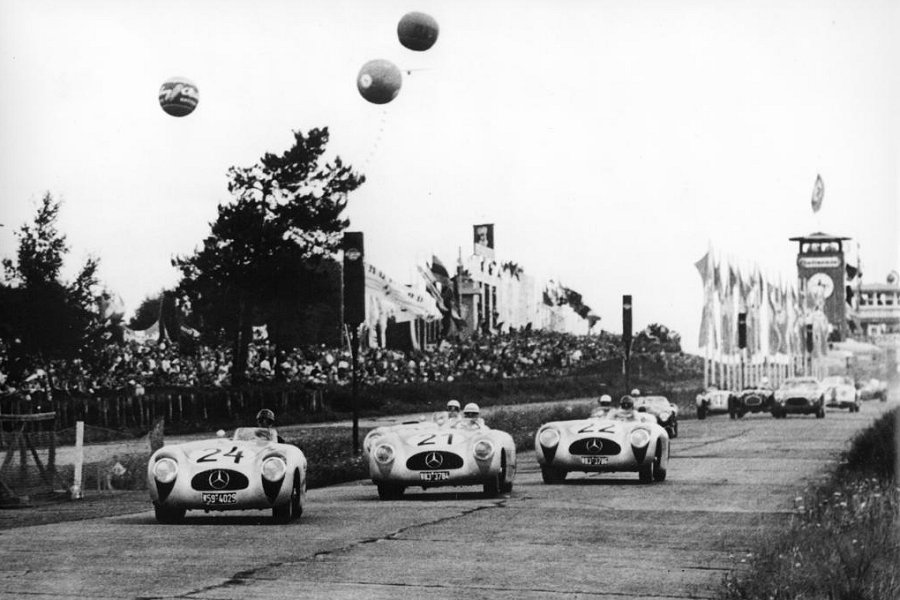 The occasion for this latest three-pointed star success was the second round of this year’s Veranstaltergemeinschaft  Langstreckenmeisterschaft Nürburgring or VLN for short!

It is a series of races round the Nordschleife “proper” circuit for GT/Touring cars and on average there are usually about 200 starters which, like the similar field in the 24 Hour race, are set off in three separate packs. It seems to work very well and if there is an incident official cars/rescue vehicles go round to the scene while everybody carries on racing – no safety cars picking up leaders here! There are plenty of classes to cater for different specifications – 26 categories in this race – and with such a long lap (14.2 miles) the cars are soon spread out. 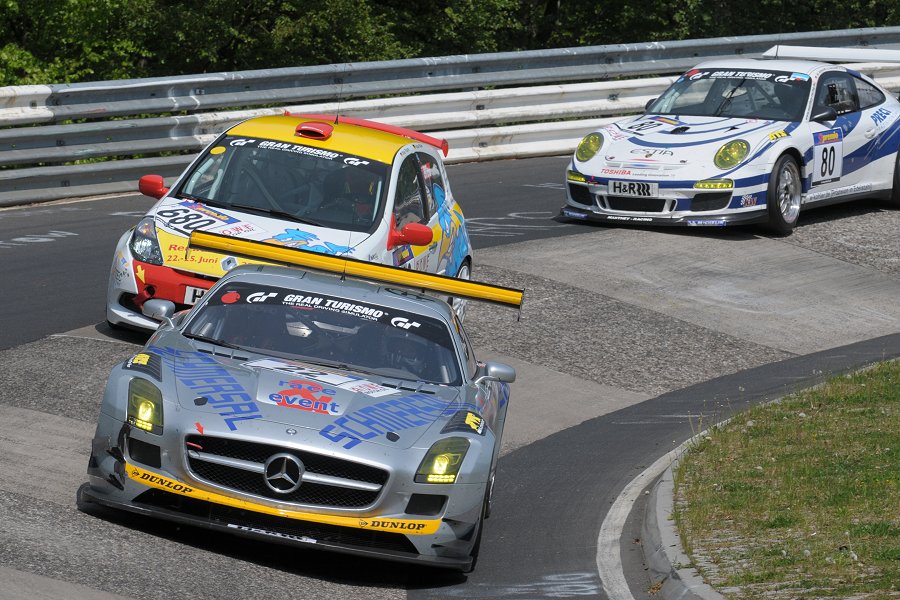 This round was a four-hour event with 203 starters. Not surprisingly the manufacturers use these races as a preparation for the forthcoming 24 Hours. For example, BMW has elected to do the first three rounds this year, winning the season’s opener. 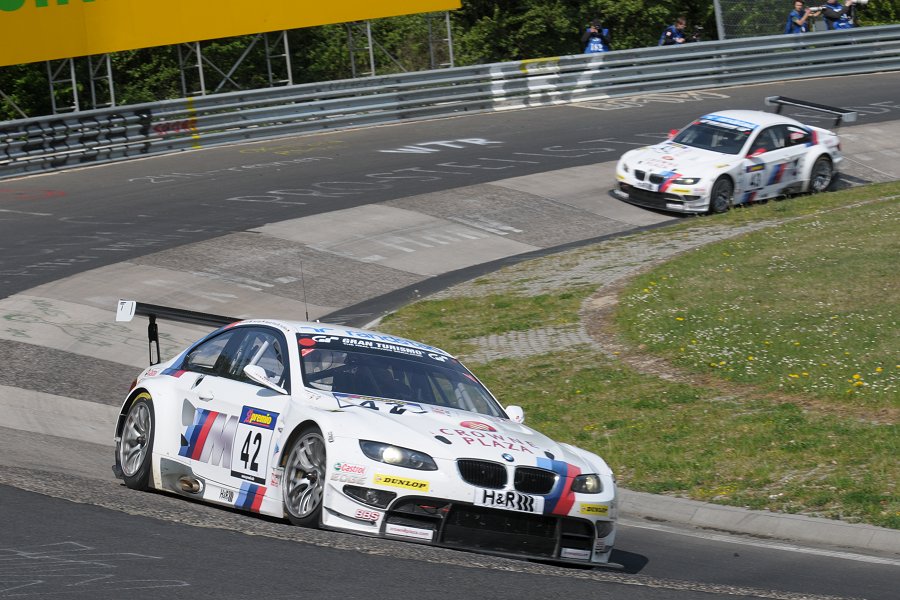 There were no less than eight of the new Mercédès taking part, all run by private teams but with the support of the factory. The car had made its competition debut here in the September 2010 VLN race but crashed early on; it scored its first win in the following round and took a third place in that year’s final race. (The car which finished 21st) 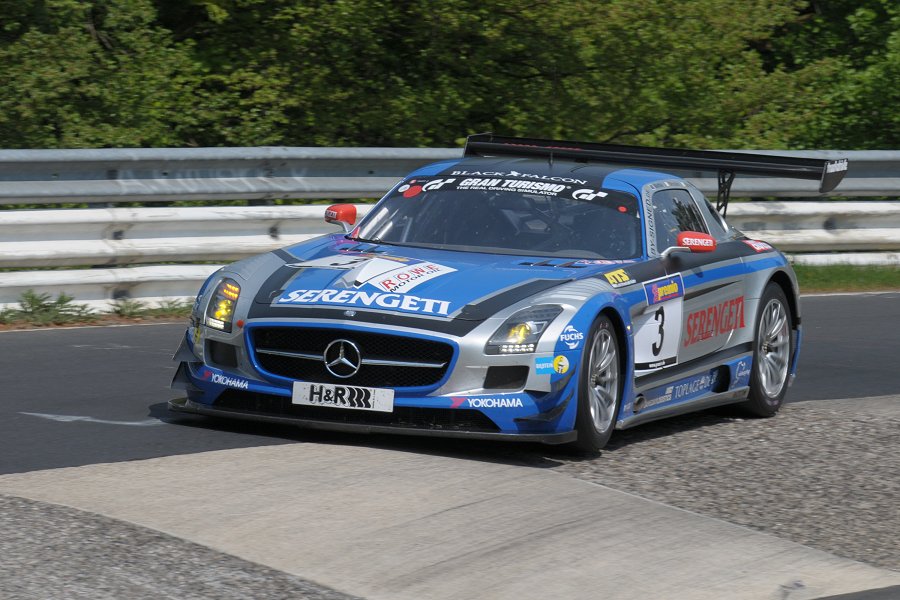 Porsche continued to develop its 911 Hybrid. This was the first appearance of this year’s new car: it is about 50 kilos lighter, has less engine power to improve economy and more power is sent to the front wheels. Also, the air intakes ahead of the rear wheels have been deleted. 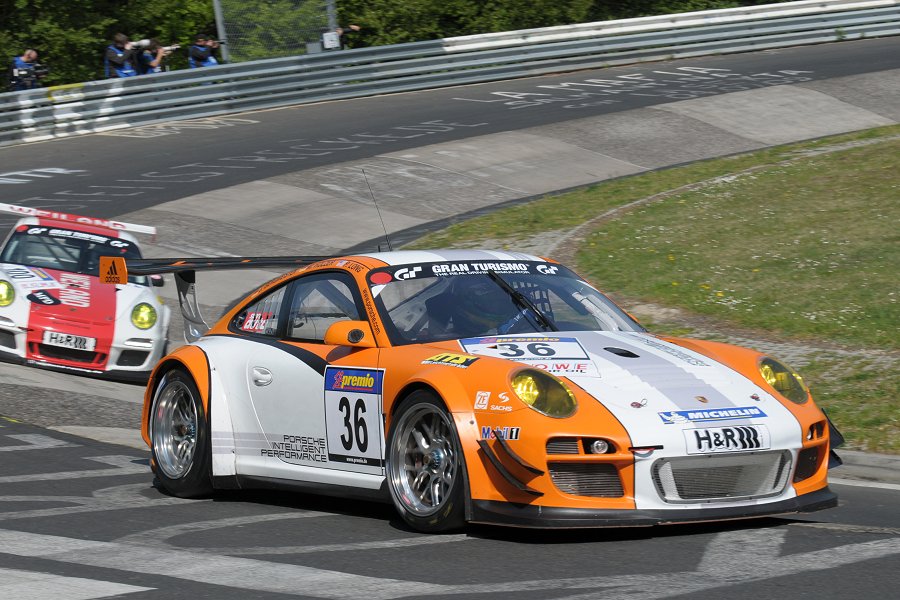 The Aston Martin Test Centre nearby uses VLN races to perfect its products. 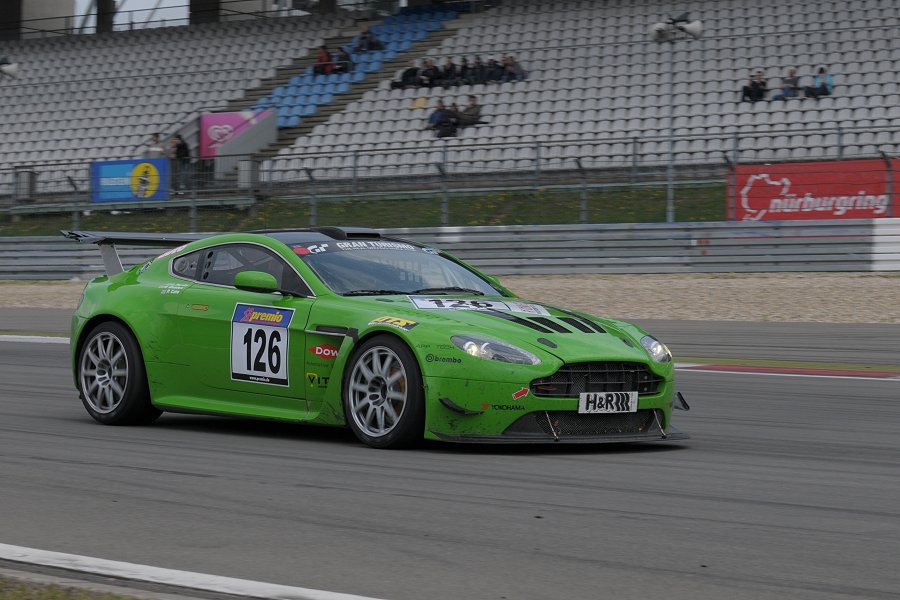 By the end of the race 63 cars had retired leaving 140 finishers. The always competitive Manthey Porsche followed the victorious Mercédès (driven by Chris Mamerow and Armin Hahne) home; then came one of the “works” BMWs, another Mercedes, the second factory BMW and in sixth place the first of the Audi R8s. 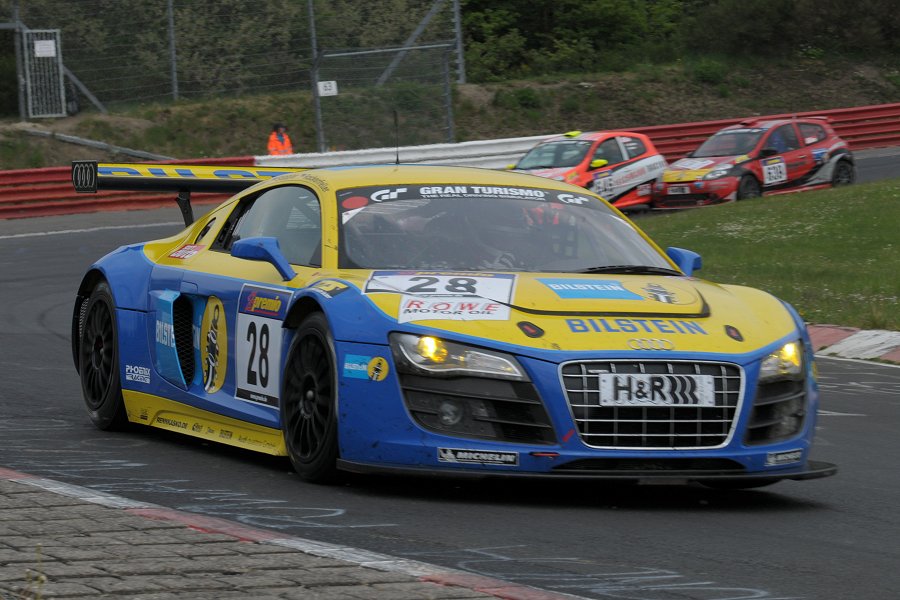 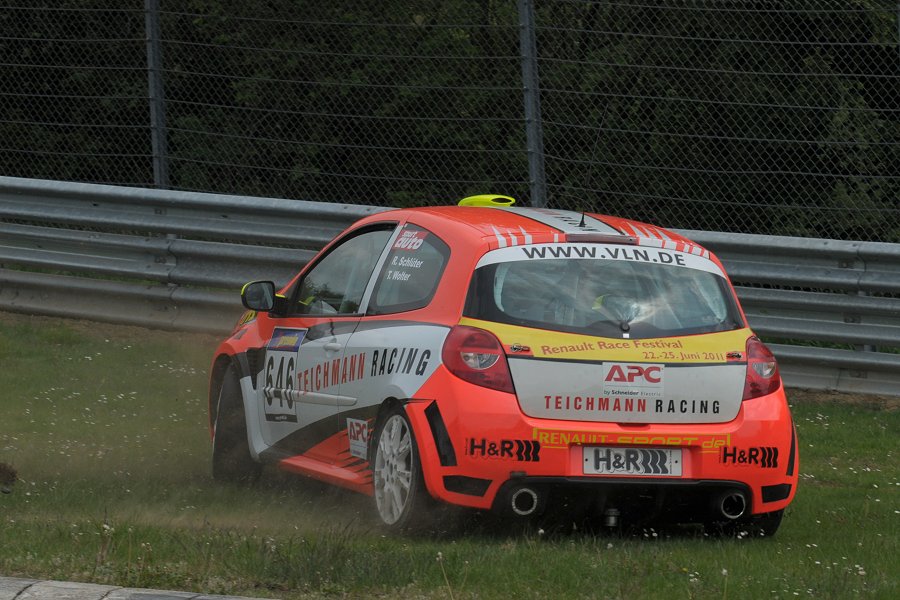 © 2011 Words and images by David Blumlein