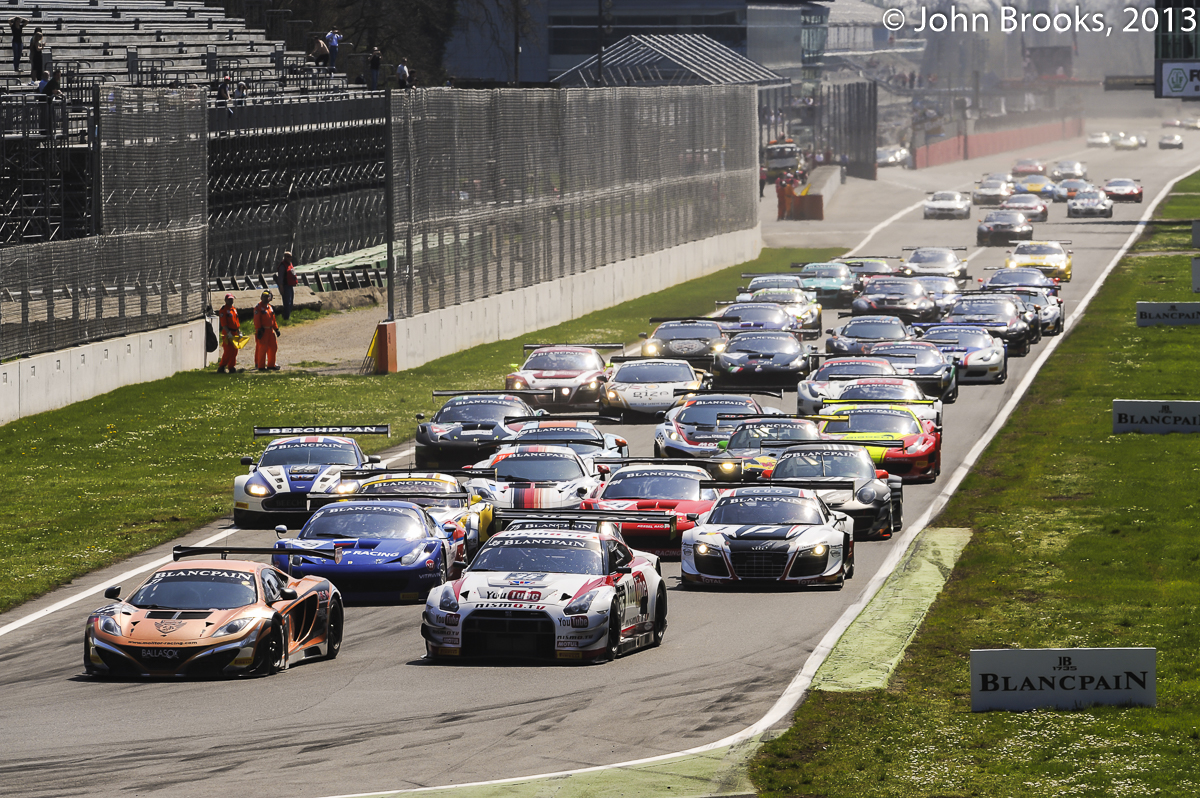 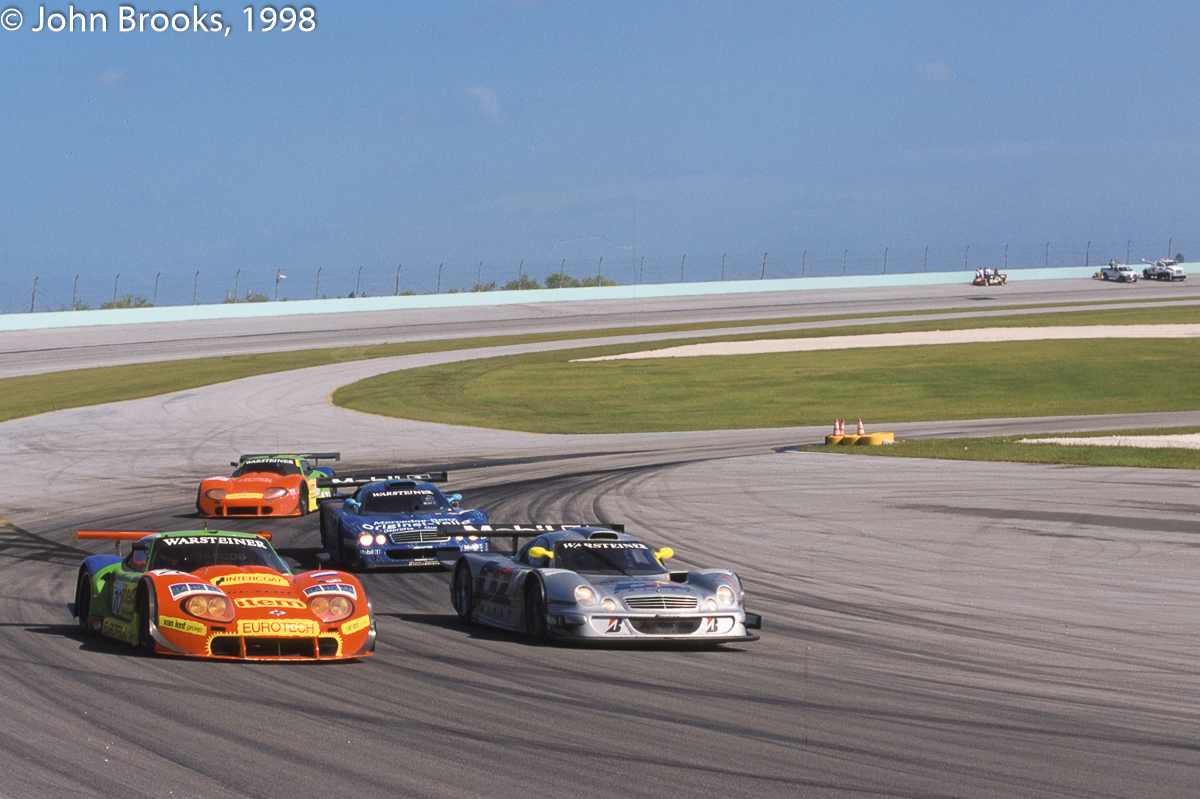 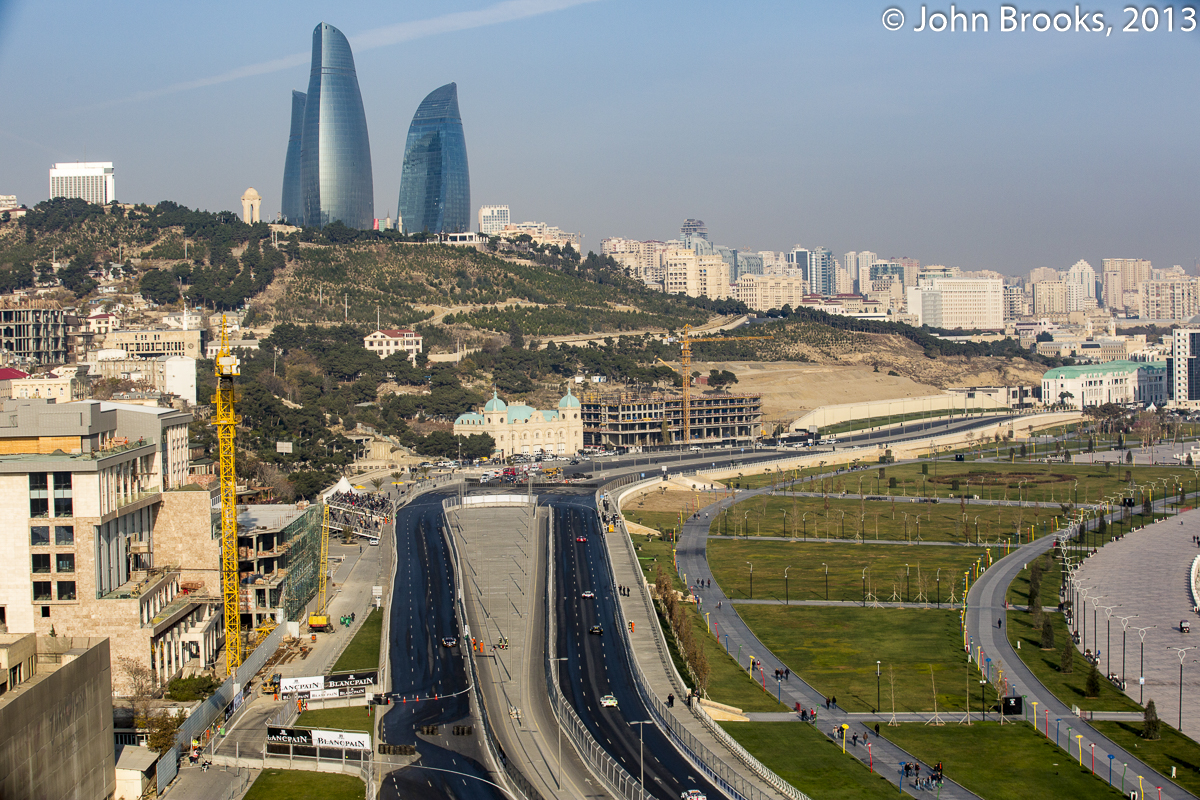 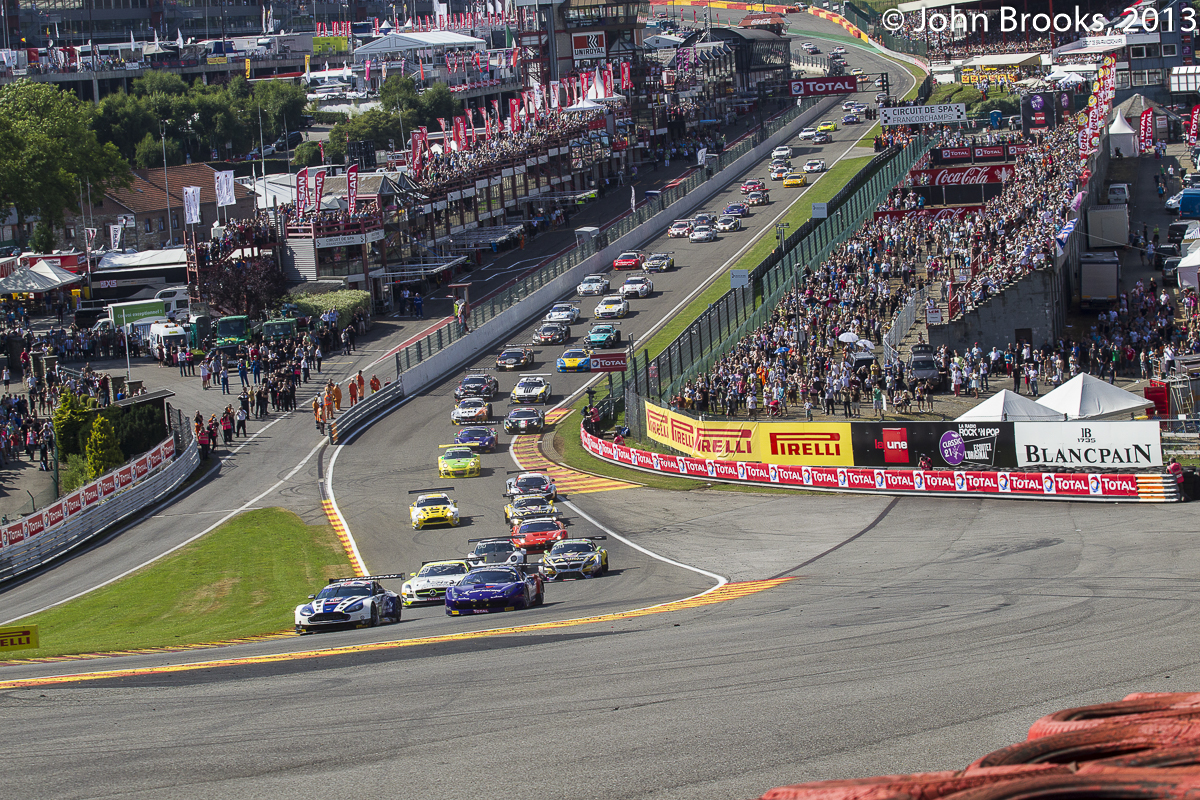 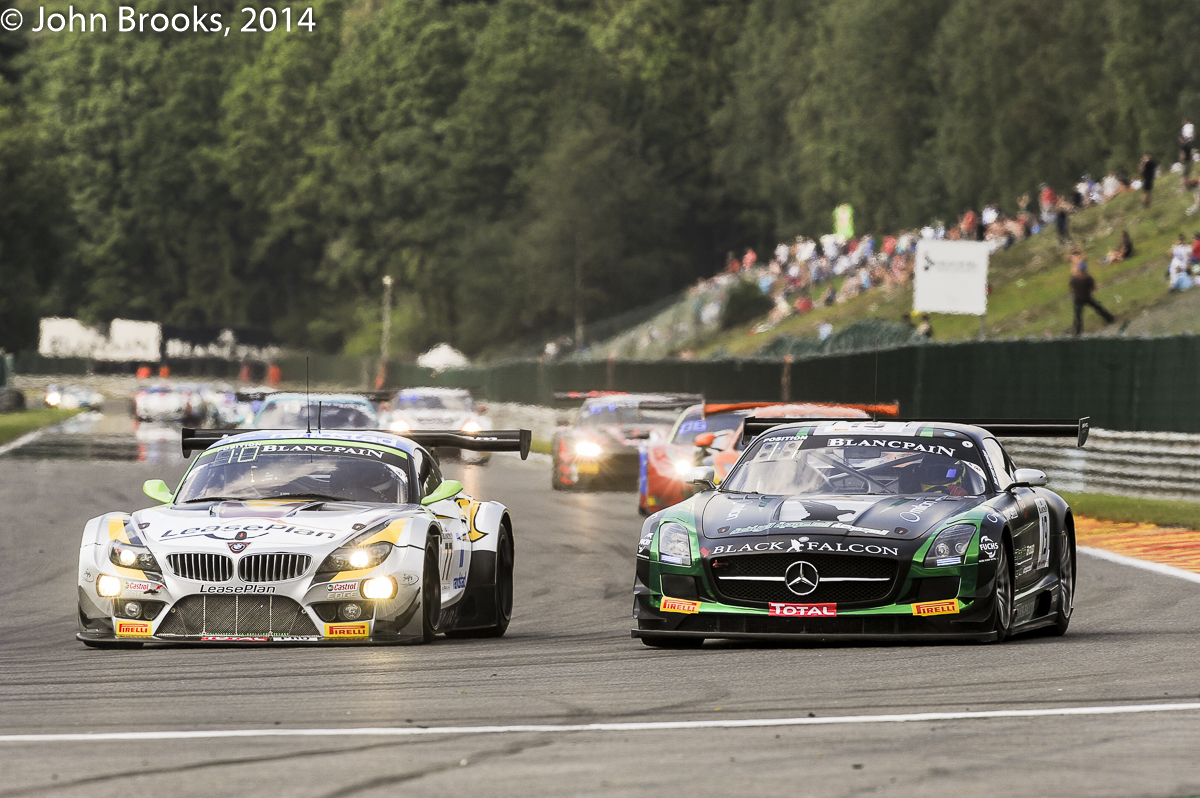 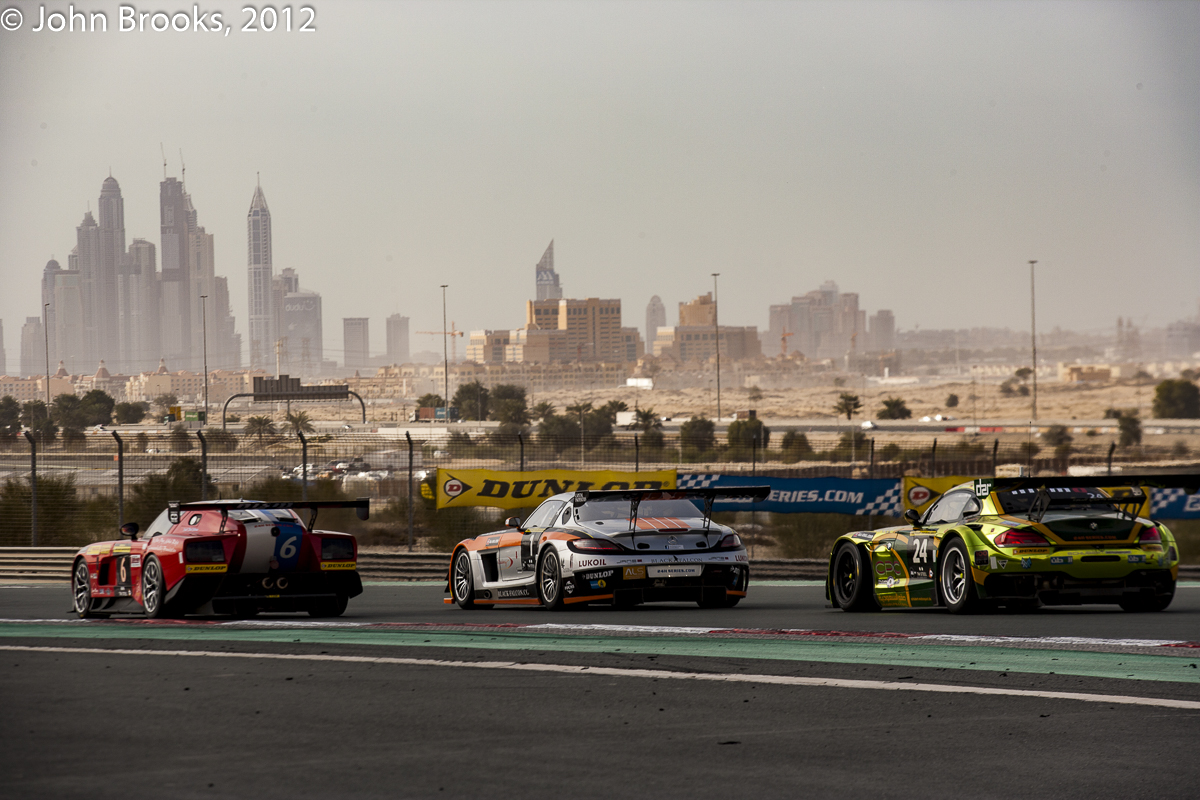 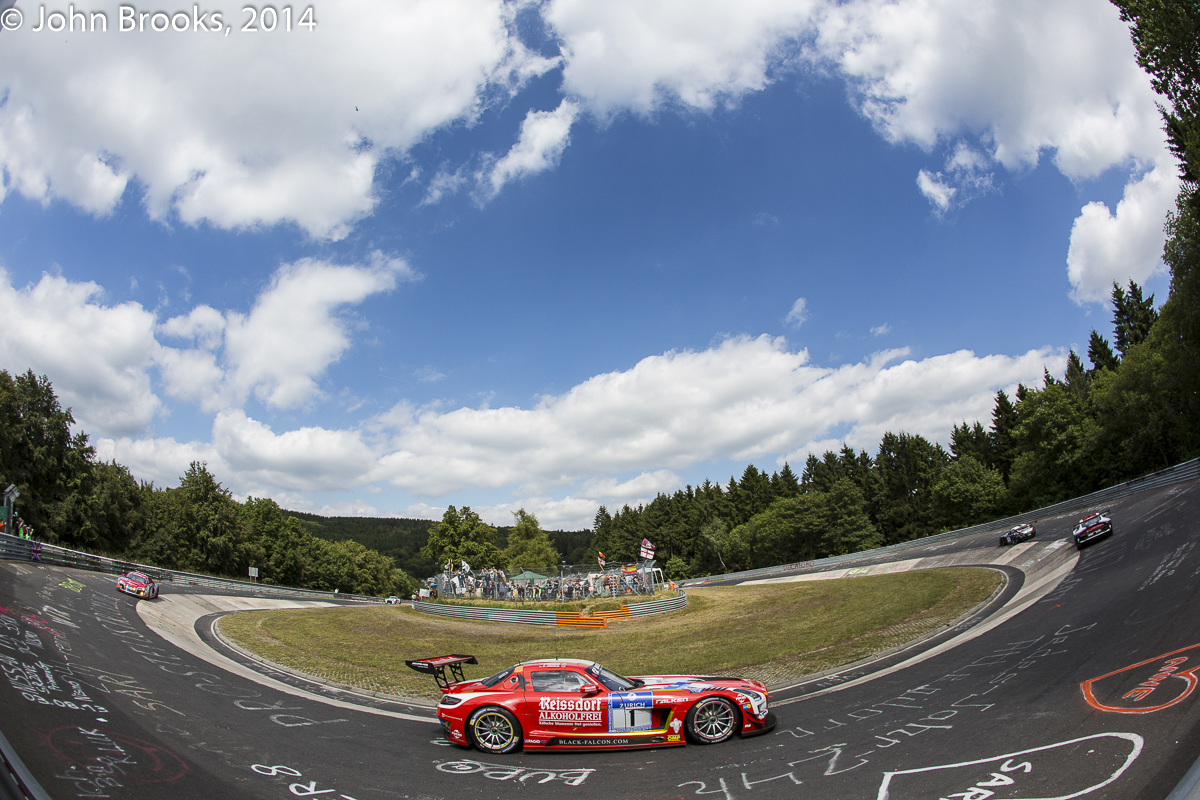 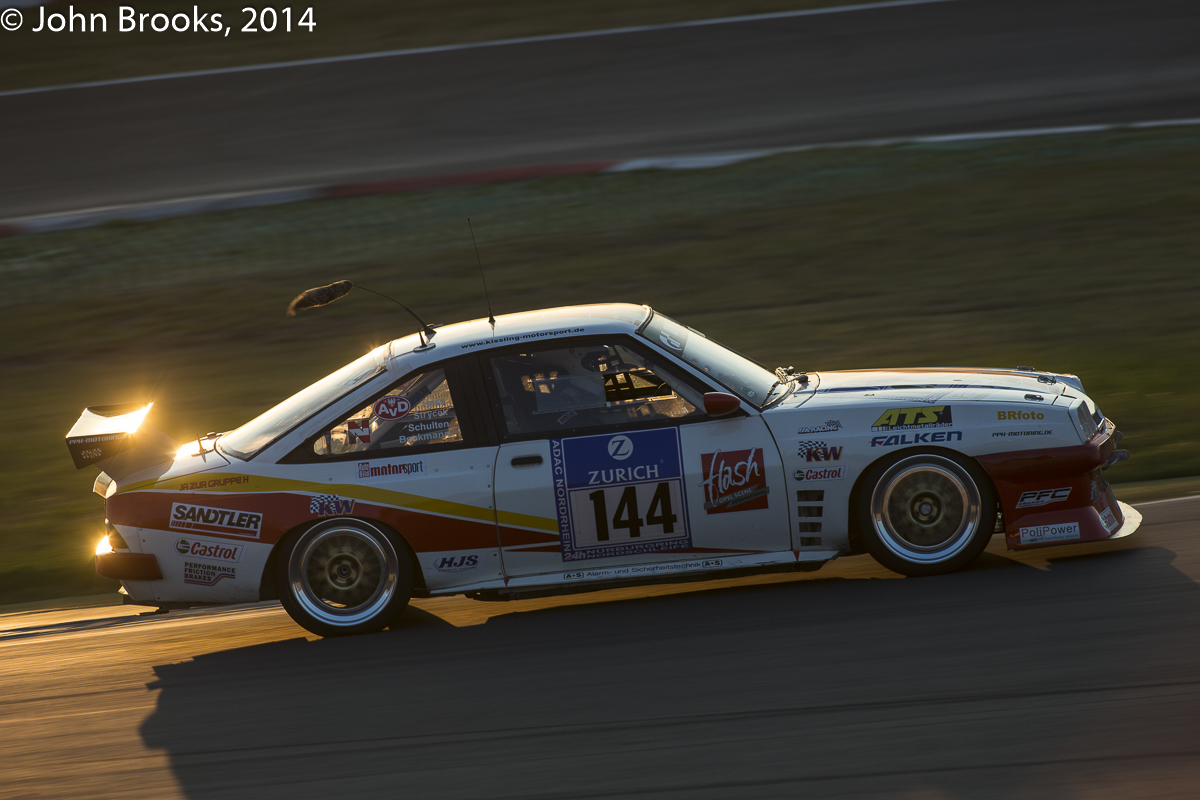 The first endurance race of the 2013 season took place last week in Dubai. With a huge entry of good quality it can certainly be counted as a success. Our Special Correspondent was out in the Emirates, here are some of his reflections on the event.

Reflections on the Dubai 24 Hours

The Dubai 24 Hours for GT, Touring cars and 24H Specials is a wonderful race. Entry for the public is free, yes free, with free use of the grandstands, free entry to the paddock and a generous grid walkabout before the start. The rest of the world, take note! Being run in mid-January, the race provides an ideal opportunity for manufacturers and teams to try out new cars, new parts etc., with adequate time to make changes and modifications before the start of the full international season.

Two years ago the Mercédès-Benz SLS made its 24 hour début at Dubai with a team of three factory-supported cars – the SLS has won the race ever since. And there is none of that confused safety-car nonsense in this race – whenever there is an incident requiring the cars to slow right down, the marshals wave the purple Code 60 flags and every car is compelled to slow down immediately to a maximum of 60 kph on pain of stiff penalties; it does not pay to disobey! Thus the relative intervals between the cars are maintained and drivers who have built up a lead over their rivals don’t lose it as is so often the case with the safety-car system. Code 60 works a treat and is much fairer for everyone. The rest of the world, take note! The weather for the race is invariably pleasantly warm and there is almost a guarantee of no rain; some sand blown onto the track sometimes but that’s racing. And 81 cars started this year’s race, with a variety of classes and sizes, just as endurance racing should be. The circuit is 5.39 km long with two 1 km straights, quite able to accommodate the different performances of the cars. Below are some of the cars which caught my particular interest: 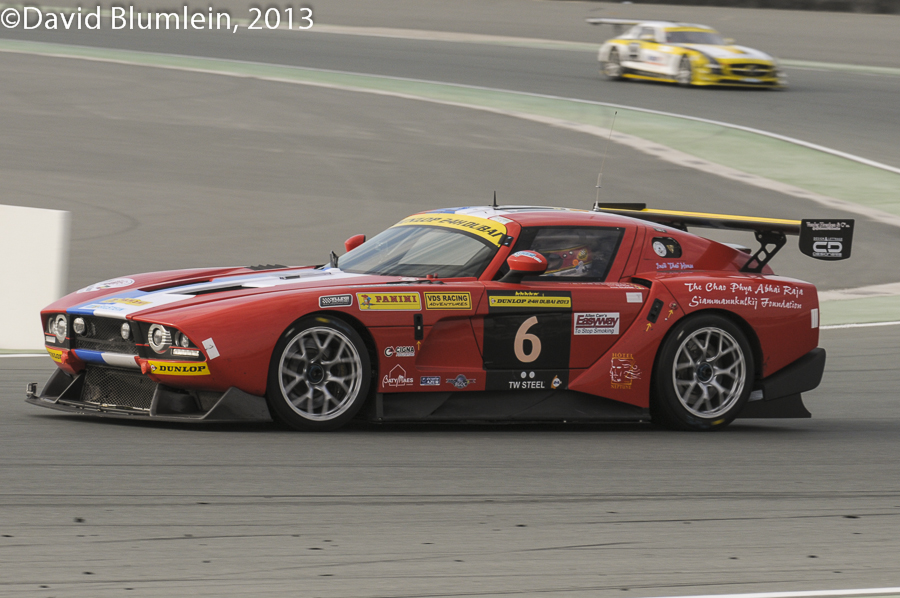 This is the new VDS GT 001-R from Belgium, making its race début. It is said that Tony Gillet influenced the chassis design and, like the final racing version of the Gillet Vertigo, this car also uses the 4.2 litre Maserati V8 engine (built by Ferrari). It not surprisingly for such a new car encountered all sorts of problems during the twenty-four hours but was still running at the end, albeit way down the field. 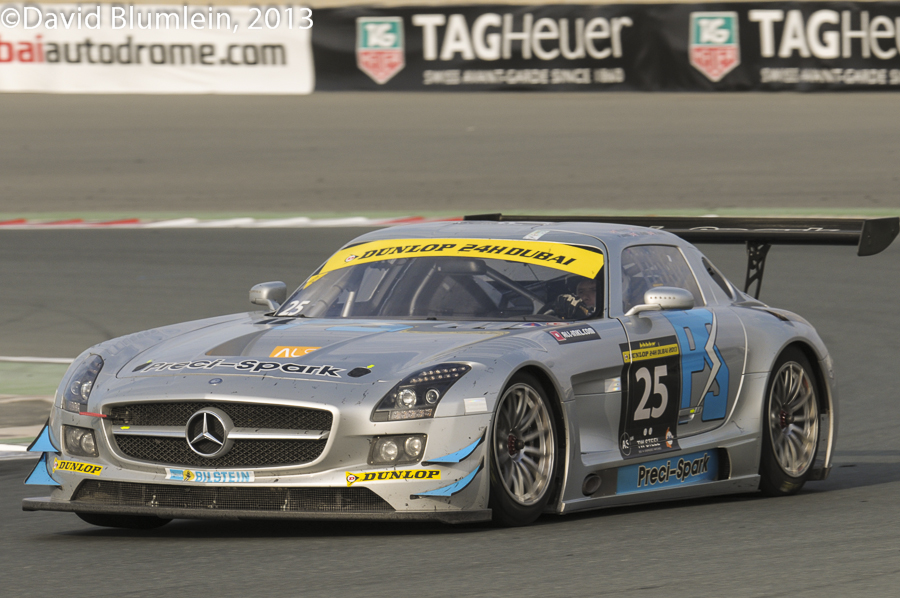 The Jones brothers, former British GT Champions, came to the Dubai race for the first time, enabling their three sons to share their Mercédès SLS AMG GT3 with them. The family finished a creditable fifth overall and second in their class. Totally unforeseen was their influence on the final outcome of the race. The Black Falcon team had their number one entry seriously damaged in a testing accident on the Wednesday and the Jones brothers made their spare car available to them. This was to entail much hurried work because the spare car was set up in sprint mode and needed to be adapted to undertake an endurance event. The Black Falcon team stripped the car right down and transferred their engine and transmission etc. to the replacement car, a major undertaking with practice on the Thursday and the race at 2pm on the Friday. Here is the “interim” car in practice where it took an astonishing pole position: 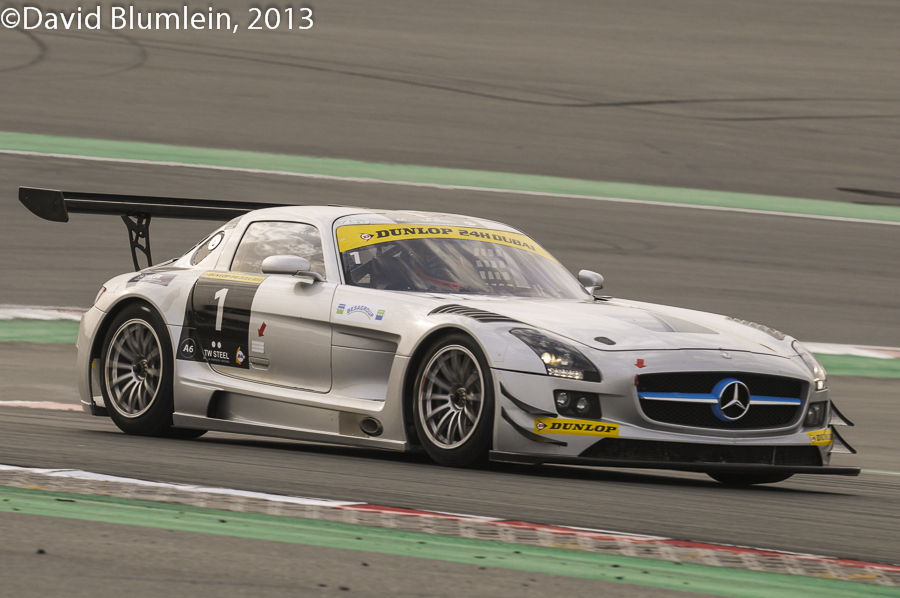 The full conversion was ready for the start and history records that this car went on to win the race outright; 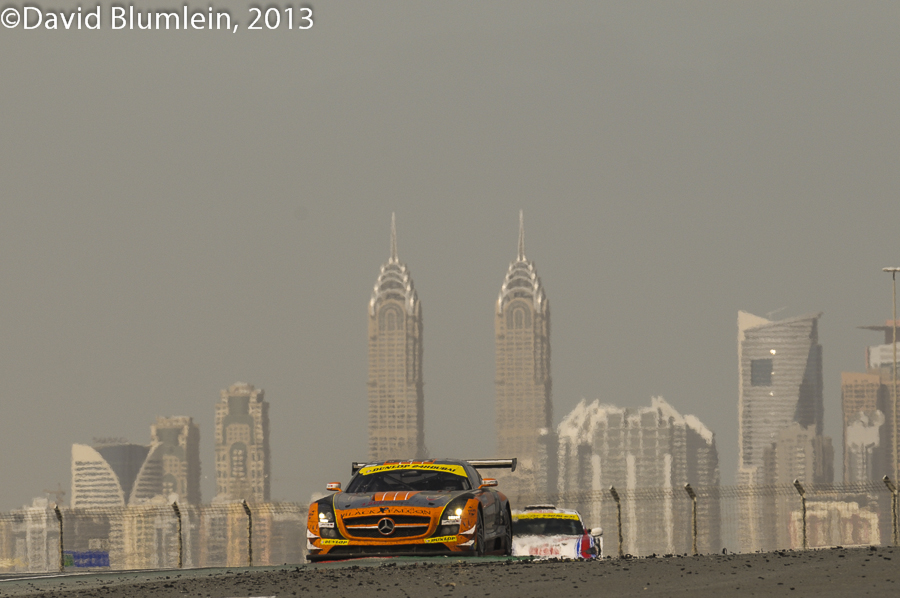 here it is cresting the brow at Turn 15 with a typical Dubai backdrop. 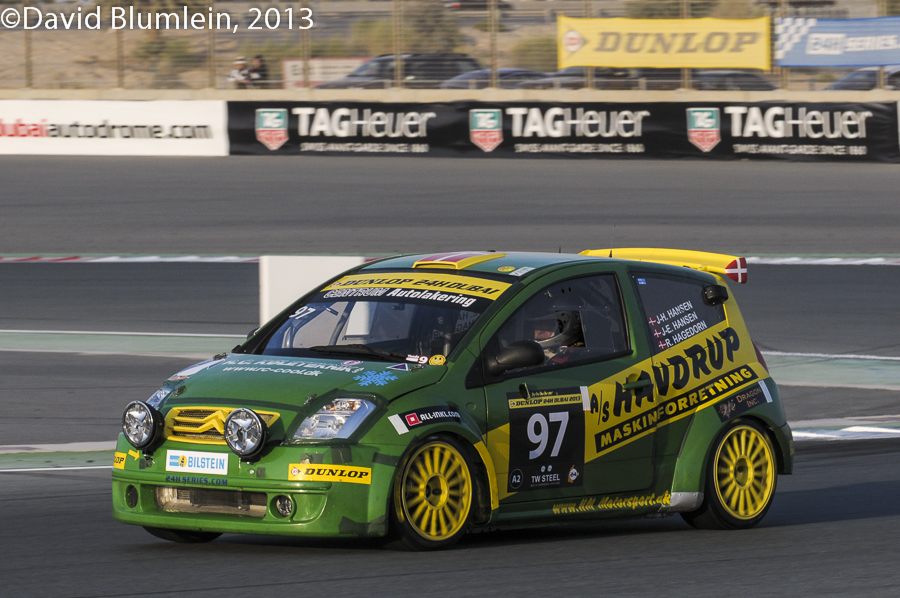 The field included several “tiddlers”, especially Clios and Minis but this little Citroën C2 was going particularly well in the early stages – alas, it did not reach the finish. 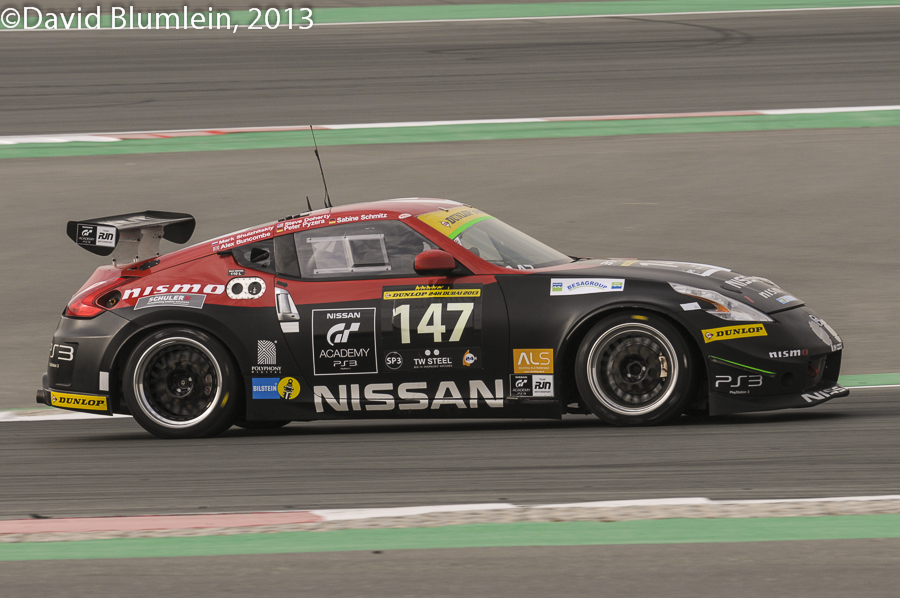 Nissan made a big effort with a team of two 370Zs in the GT4 (SP3) class. This one fell back after an off-course excursion but its team-mate took 2nd in the class. 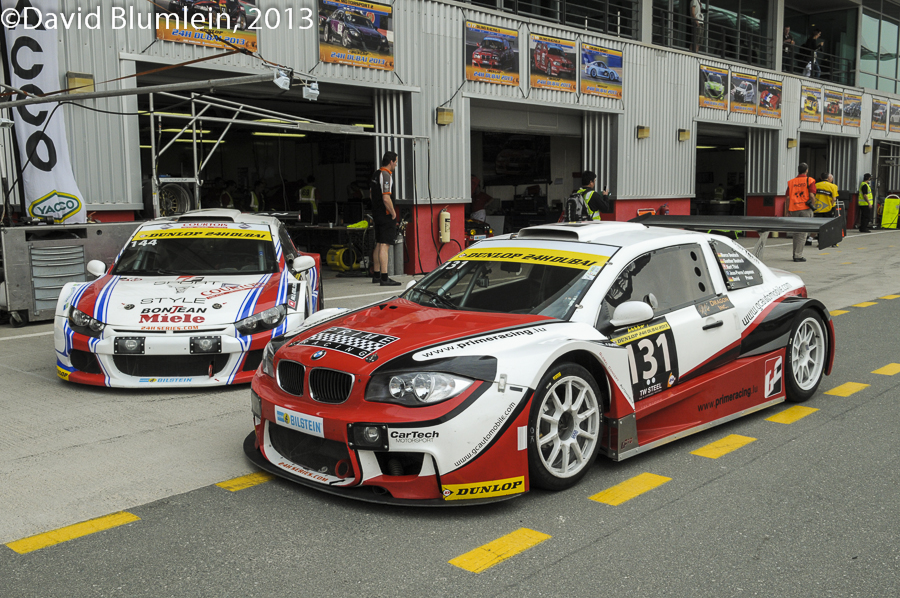 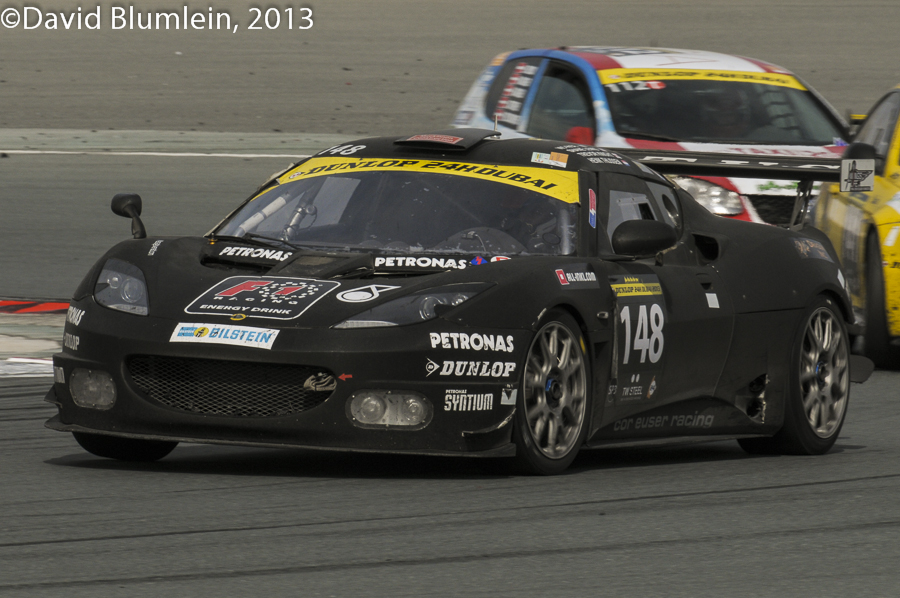 It gave me great pleasure to see this Lotus Evora GT win the GT4 class. Evoras have been quietly notching up such successes in the last two seasons or so in GT races. 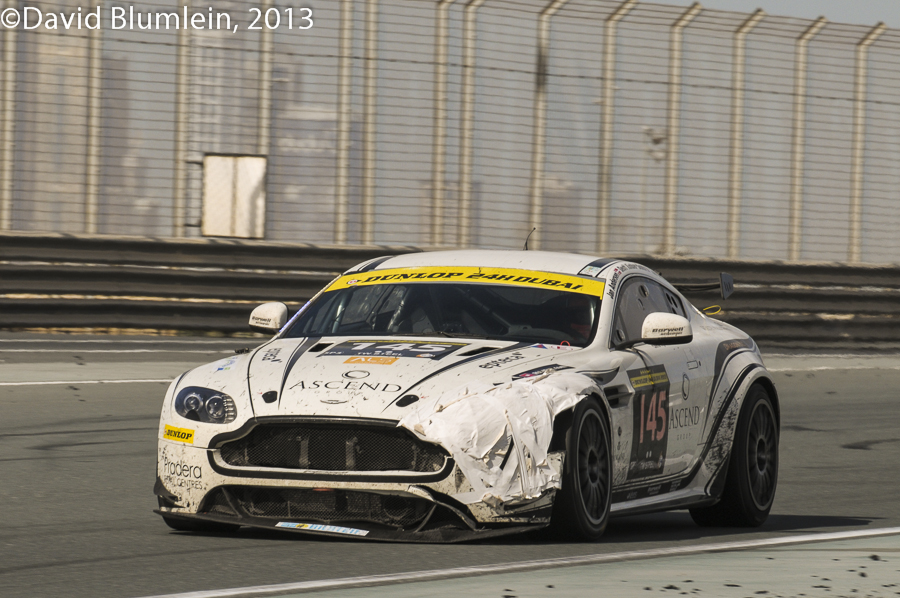 The battle-scarred Aston Martin Vantage GT4 run by the Barwell Team on its way to fourth in the class. This is an example of a car that was trying out some new parts. 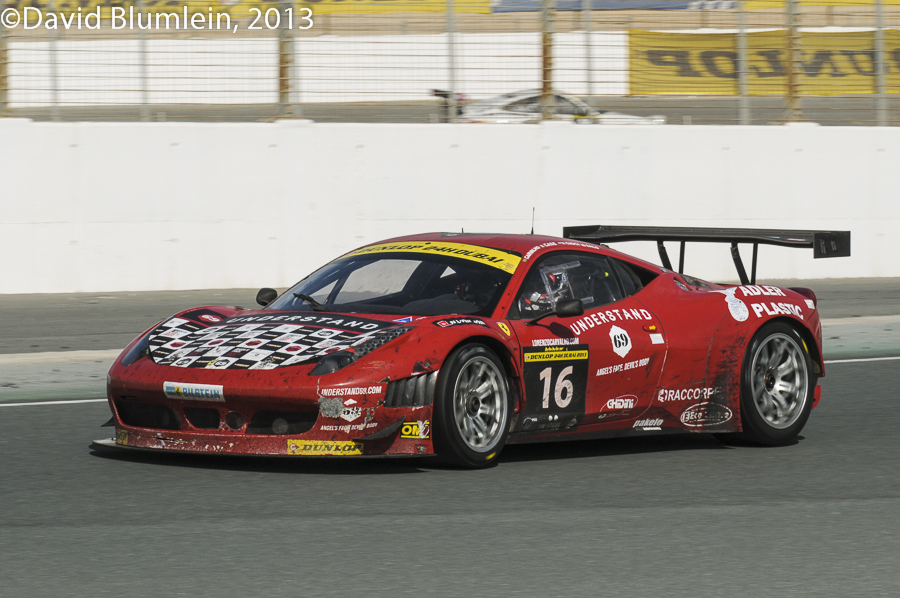 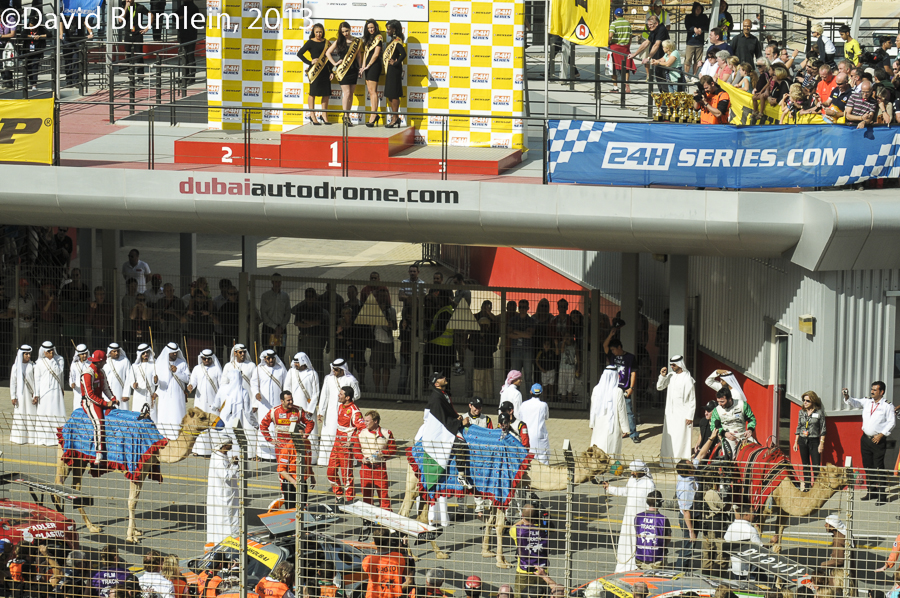 Picture DB3  It is a charming tradition in the Dubai 24 Hours that one of the drivers from each of the first three finishing cars is brought to the podium on a camel. Here they are arriving prior to receiving their awards.

This was the eighth running of this race and it is good to see how it is growing in status. It attracts both very professional teams and drivers and the atmosphere reminds me of Goodwood in the Fifties when there were no petty restrictions! And as a privileged member of the media I have to say that the hospitality extended to us is second to none. The rest of the world, take note! 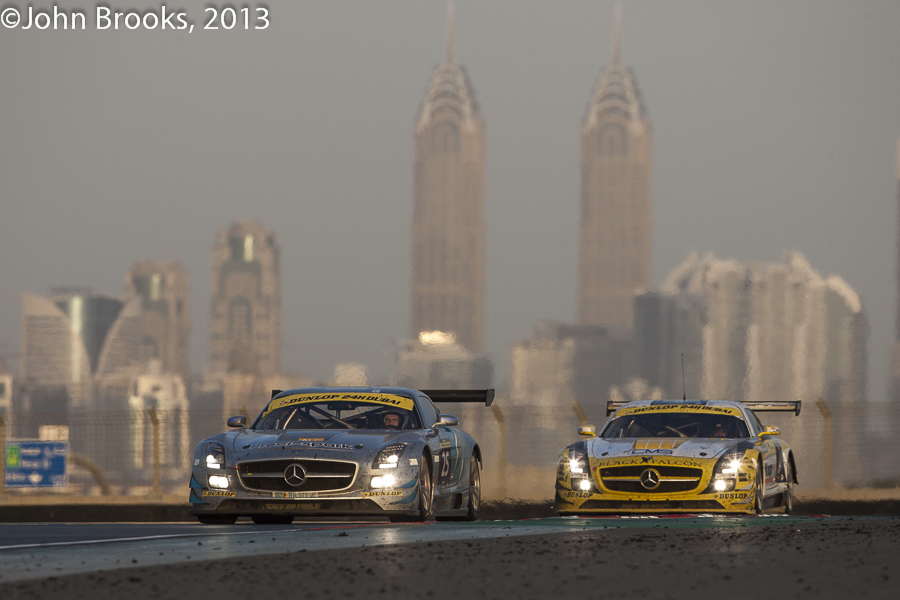 The eighth edition of the Dubai 24 Hours took place last weekend. The event has matured nicely and even in these financially perilous times could boast 81 starters, someone must be doing something right.

At dawn we have a brace of SLS coupés, with the Jones’ example on its way to a fine fifth place overall. More from the race during this week. 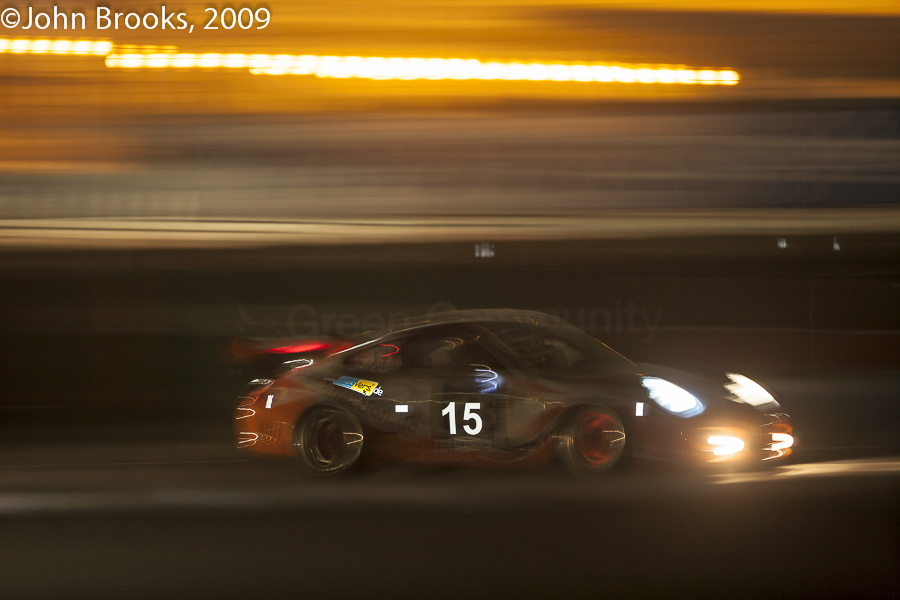 First race of the year is this week, off to Dubai for the 24 Hours with DB and The Captain. Looking back at a few shots from 2009 and 2011. This caught my eye.