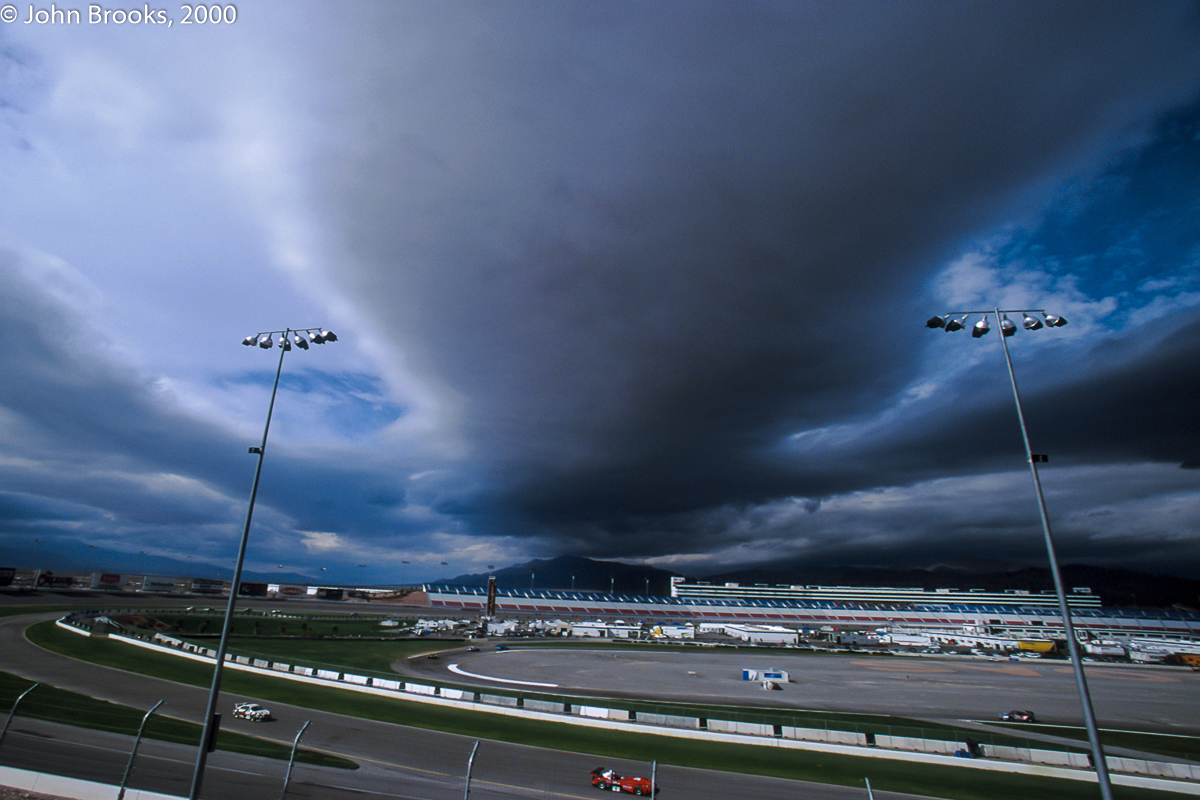 I wrote the majority of this post ten years ago this month, some of it came to pass, some did not. Who could have predicted that a decade later the business models of both Formula One and NASCAR would be under threat, both suffering falling audiences and both appearing to lose connection with the younger generations? In F1’s case, the sheer amount of revenue that is leaving the sport is undermining the very existence of half of the grid, that is not sustainable. The lack of an obvious successor to Bernie Ecclestone is another issue that needs to be addressed sooner than later, even BCE cannot turn back the clock, there will be no settling a $100,000,000 deal with Father Time. Endurance Racing has more hopeful signs than it did a decade ago, the rules package for the LM P1 category is a reflection of the technology driven solutions that we will all have to use in this era of reduced energy consumption and emissions. The FIA World Endurance Championship now has four manufacturers in its premier category, with others supposed to be in the wings, all pushing different solutions to the hybrid technology question. The Le Mans 24 Hours remains the pre-eminent event in motor-sport and the alliance between the ACO and FIA is working as well as can be expected. The question of how to fuse GTE and GT3 remains tricky, with a few vested interests keen to maintain the status quo and therefore undermining any progress, but the day will come, driven by budgetary considerations as much as common sense. 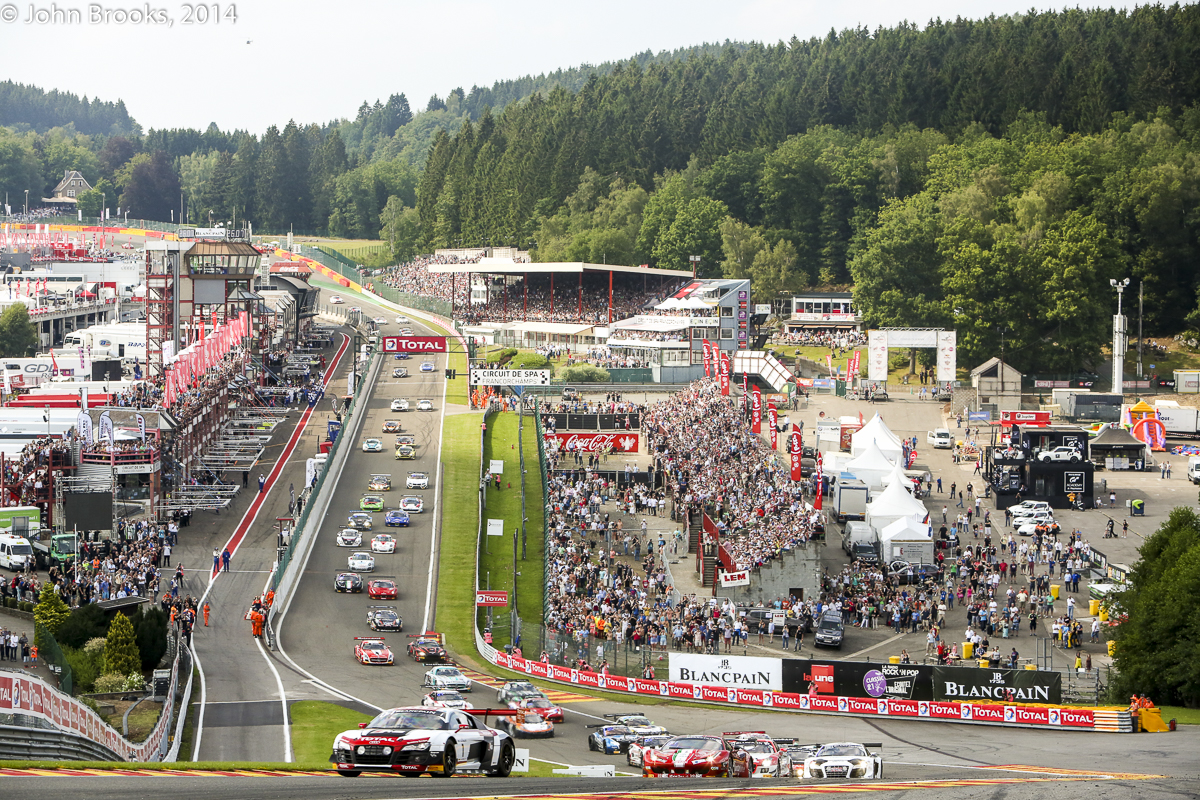 GT3 in Europe, under the leadership of Stéphane Ratel, continues to grow, with the Pirelli World Challenge in North America rivalling the Blancpain Endurance Series in terms of numbers of competitors. 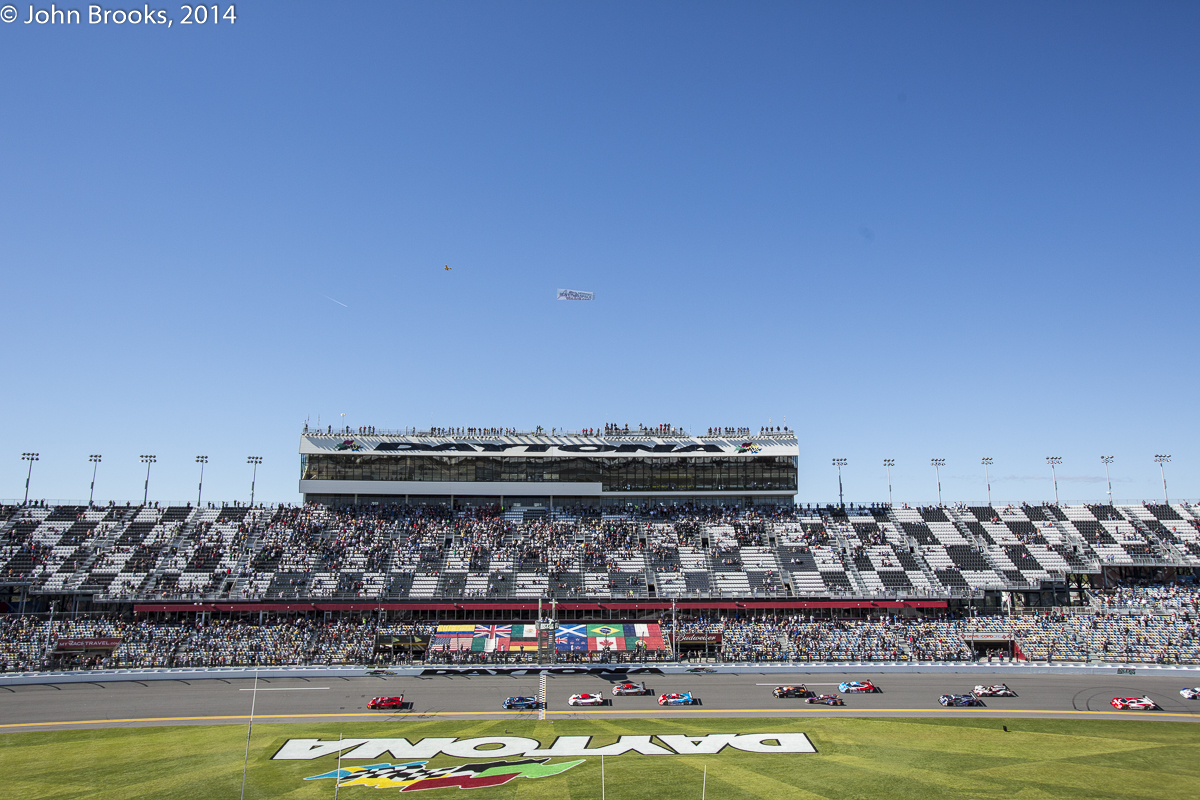 The Tudor series endured more than a few hiccups in its inaugural season but in the longer term it was the only possible solution to the ALMS/GrandAm schism, I remain optimistic that the problems will be ironed out. So let’s go back in time, when we were anticipating the Le Mans Series and reflecting on a cul-de-sac that the American Le Mans Series took in their early days. I have updated and corrected the text where necessary.

But before we do, I would like, on behalf of my loyal correspondents and myself, to wish all the readers of this little blog, Compliments of the Season. Roll on 2015. Do you remember the time that we sports-car folks were sampling the delights of racing at Super Speedways or Rovals, as they became known? Seems like another era. OK the first flaw in this statement is that we still go down to Florida every January for the Rolex but that somehow feels different, nearly 50 years of 24 hours races on the Tri-Oval will do that. Frankly during the era of Daytona Prototypes the race was largely irrelevant in the eyes of the endurance community. Now, since the take over of the American Le Mans Series by NASCAR, there appears to be a way forward to bring some form of unity in regulations, technical and sporting. There is a way to restore the Rolex to its former glories. 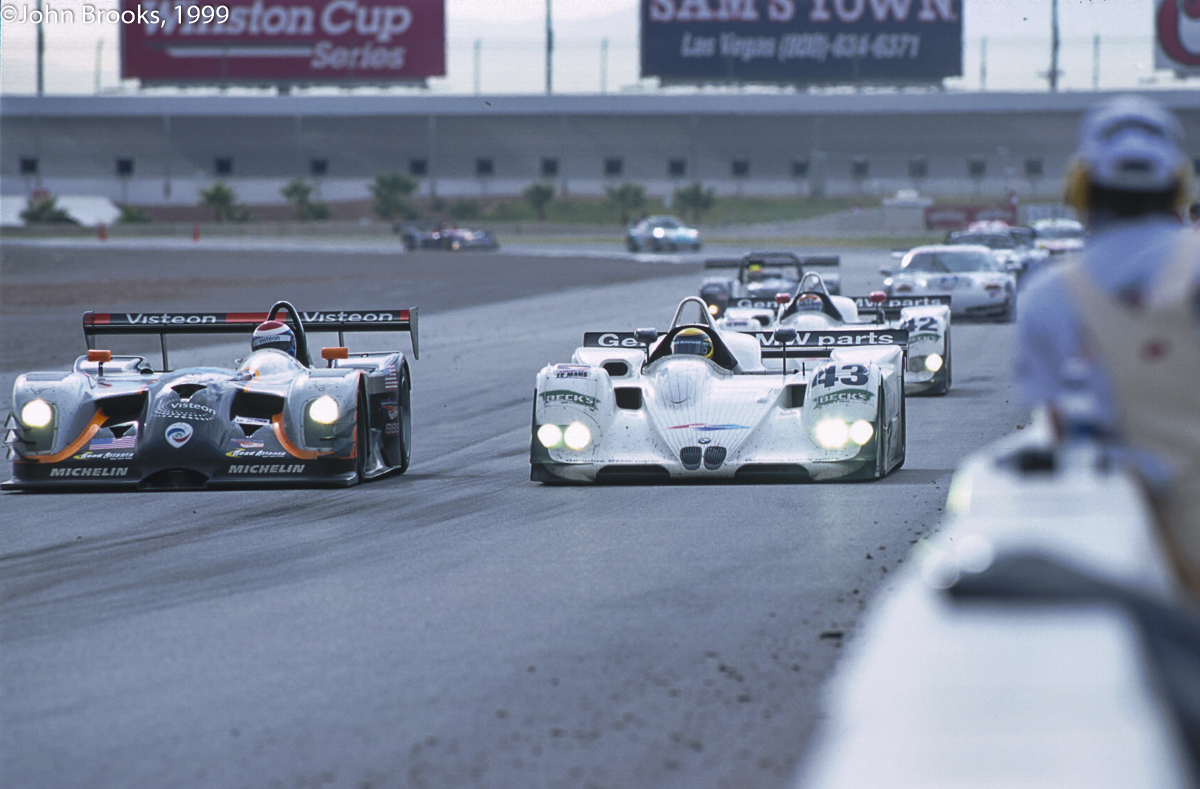 The ALMS visited these temples of NASCAR/CART (remember them?) Korporate Racing some five times over the 1999-2001 seasons. This odd direction for a pure road racing series was part pragmatism, part opportunism. Pragmatic in that some of the traditional arenas for endurance racing in North America (Road America, Watkins Glen, Lime Rock and Mid Ohio) were signed up for the successor to the defunct USRRC Championship, Grand-Am. Opportunism came from two rich and powerful barons of motor-sport, Don Panoz and Bruton Smith; Don needed venues to give the ALMS credibility with the manufacturers that had embraced his series, back in 99 they already comprised of BMW, Chrysler, Corvette and Porsche with plans for others such as Audi, Cadillac and Mercedes-Benz to tap into the wallets of the North American sports-car fan base. The ovals with their vast capacities and demographic friendly locations seemed to be a ready made answer. For Smith it was a potential revenue goldmine getting into the wine and cheese crowd at no risk (Don no doubt underwrote the affair). This sequence of races kicked off with the final round of the 1999 ALMS season when we headed for the Nevada desert and the city of Fear and Loathing, Las Vegas. At the time some of us expressed the hope that when aliens finally land on this planet that do not commence their exploration by starting at The Strip……..others felt that the aliens were here already and Area 51 is just down the ‘Extraterrestrial Highway’ and that is how Vegas came into being, but I digress.

I remember making the trip down to Las Vegas via LAX, as there were no direct flights back then from London. Picking a Ford press car courtesy of Morse I headed out into the desert, destination Barstow of HST fame, I would spend the night in some grubby motel. It became clear why Thompson kicked off his masterwerk thus:

“We were somewhere around Barstow on the edge of the desert when the drugs began to take hold.” 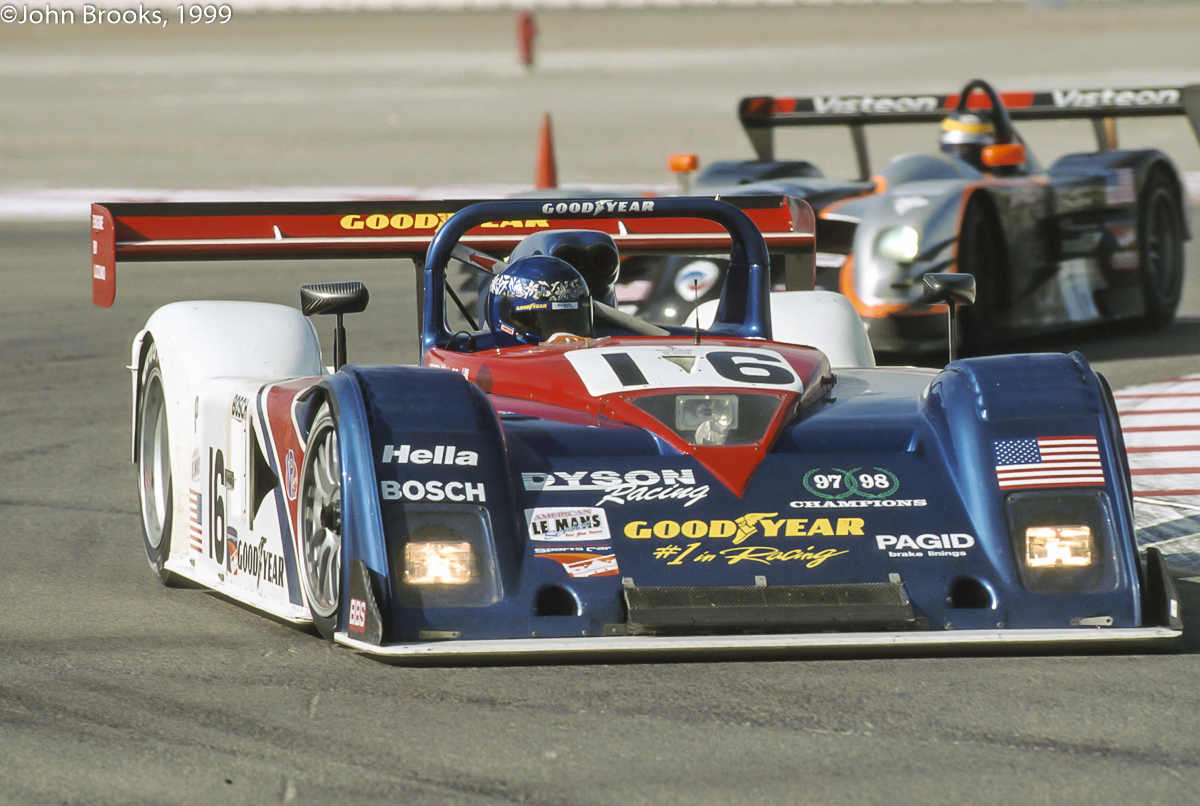 Well none of that kind of misbehaviour for me, no siree,  I was on my way to the races, this was serious business. There was a title to be won or lost, and that was the main story. Veteran Elliot Forbes-Robinson in the Dyson Riley & Scott versus David Brabham and Eric Bernard in the Panoz. E F-R had ‘retired’ several seasons ago and was driving a car that had completed over 45,000 racing miles, at least that is what the press were told, who knows, Pat Smith might have been pulling our legs. 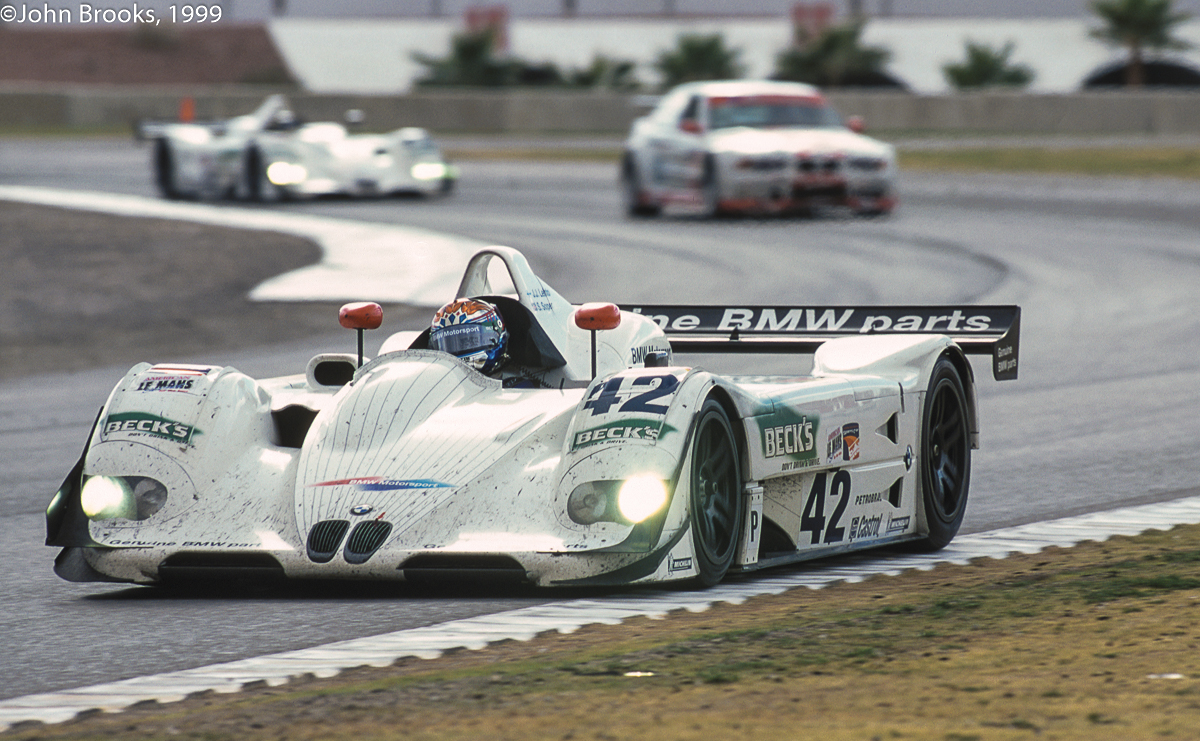 There should have been another contender in the shape of JJ Lehto in the BMW V12 LMR but a failure to complete the necessary paperwork at Sebring back in March meant no points from that victory and no possibility of the title. The Finn was not happy, grumbling to anyone who would listen. 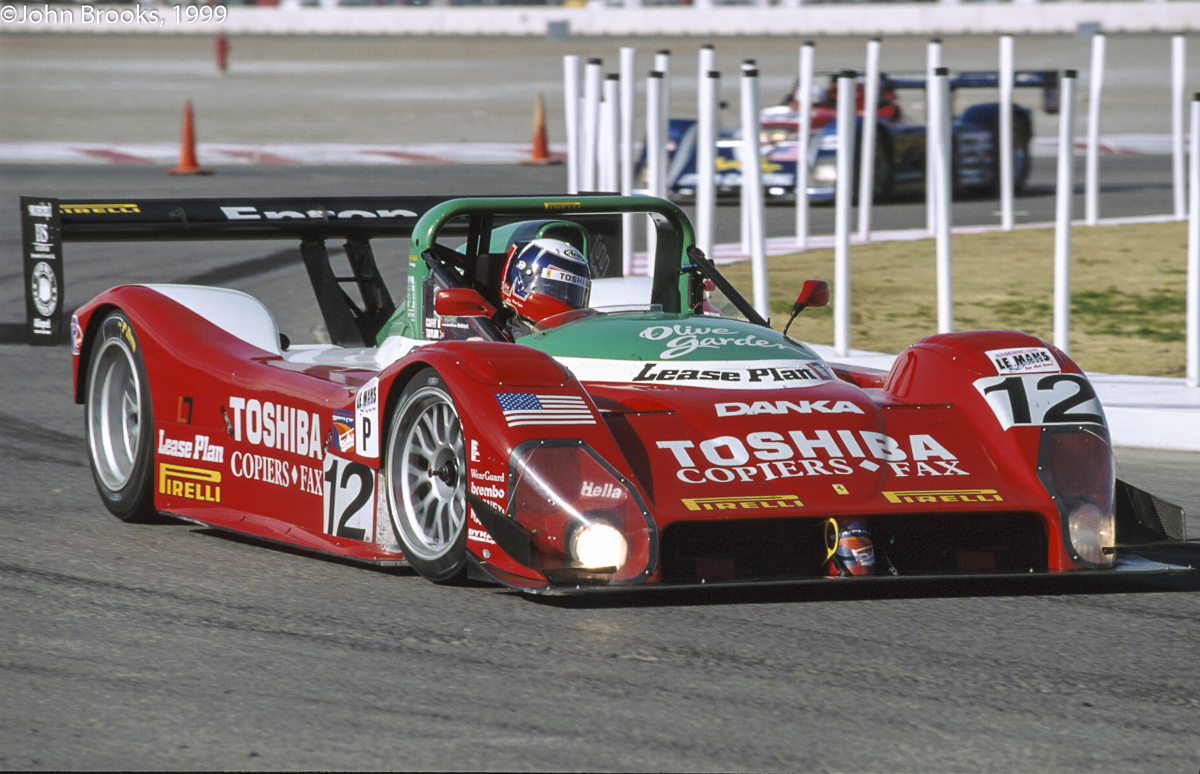 There was an end of term feeling with many teams running their cars for the last time, Wayne Taylor would be leaving Doyle-Risi Racing and the Ferrari 333 SP behind, bound for the factory Cadillac project. The DAMS Lola would also be having its final outing as the French team would represent the European arm of the Cadillac deal. Champion would run its Porsche 911 GT1 EVO in Las Vegas but was planning for a Porsche-powered Lola in 2000. 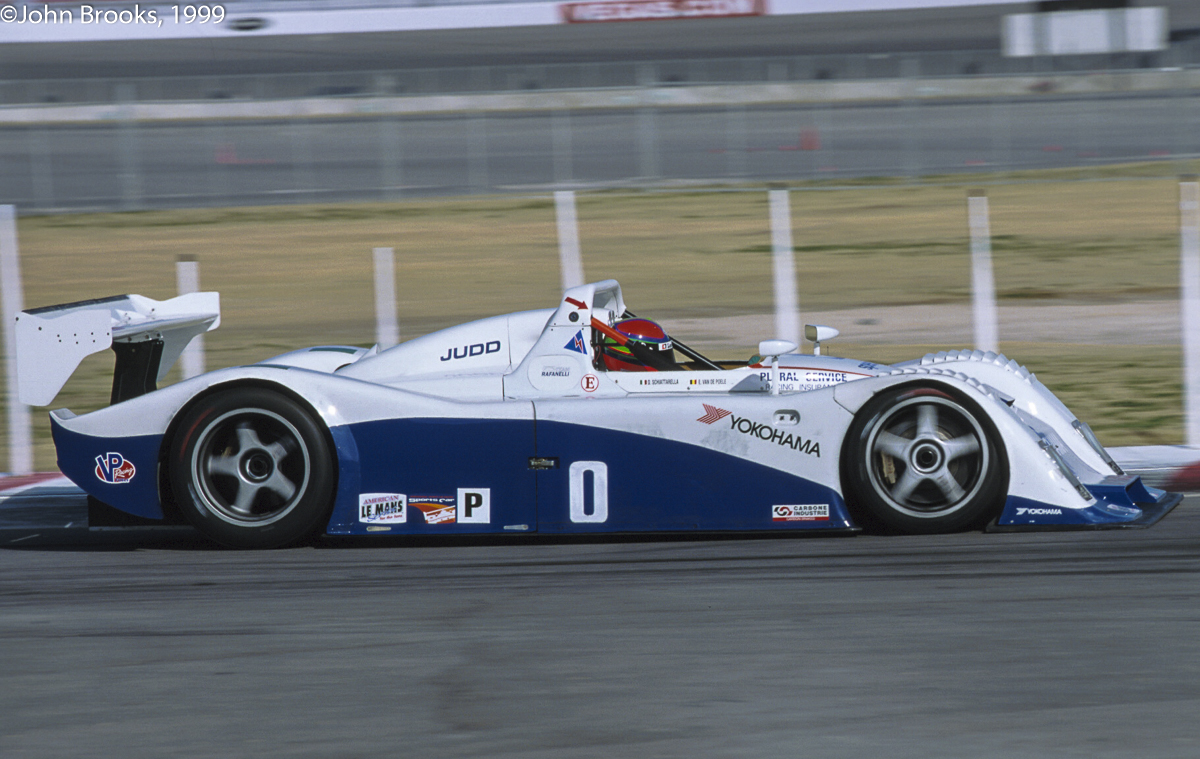 Lola was also the chassis that Team Rafanelli would adopt in 2000, though with Judd engine, similar to the power-plant they used in their modified Riley & Scott Mklll. There were two other titles to be decided at Las Vegas Motor Speedway GTS was almost in the hands of Viper and Olivier Beretta. A late season charge from Cort Wagner in the Alex Job Porsche GT3-R had left him with the GT class title almost in his grasp. The Panoz team looked to be strongest, especially after Steve Soper destroyed a BMW while testing and the two Braselton-based roadsters monopolised the front row. The title looked to be heading the way of the Panoz lead pair but with under 30 minutes to go their engine cooked itself and that was the end of their hopes. E F-R was Champion. David Brabham reacted in a sporting fashion, congratulating his rival despite his own disappointment, typical of the man. The race was won by the BMW of JJ Lehto and Steve Soper from their teammates Bill Auberlen and Jo Winkelhock………..Beretta and Wagner took their crowns as expected, the American Le Mans Series first season had come to a close. Everyone agreed it had been a roaring success. Las Vegas Motor Speedway was better than anticipated, even if from a photographer’s perspective it was crap location to shoot at. That would be a common thread running through the ALMS’s visits to these stadiums. However the tiny crowd lured from the flashing lights of the slots meant that the event was on balance a failure. The lack of interest shown by the punters in the ALMS was illustrated by the findings of noted chassis plate fondler and author of the legendary endurance racing encyclopaedia, Time And Two Seats, Janos Wimpffen. During the race he ended up sitting with the few spectators that did show up to the facility on the day and discovered that most of them were patiently waiting for the sports cars to finish so that they could enjoy a ride in the Richard Petty Experience…….. More later in the week.