The 2012 season stutters into life, while racing is almost impossible in the prevailing inclement conditions, there are always The Shows to visit. So the end of January and the arrival of February heralds two of the best, Retromobile and the Bremen Classic. More from Paris in due course, but in a recent visit to the Hanseatic City of Bremen our Special Correspondent has once more unearthed some ‘Rare and Interesting’ cars for our edification. 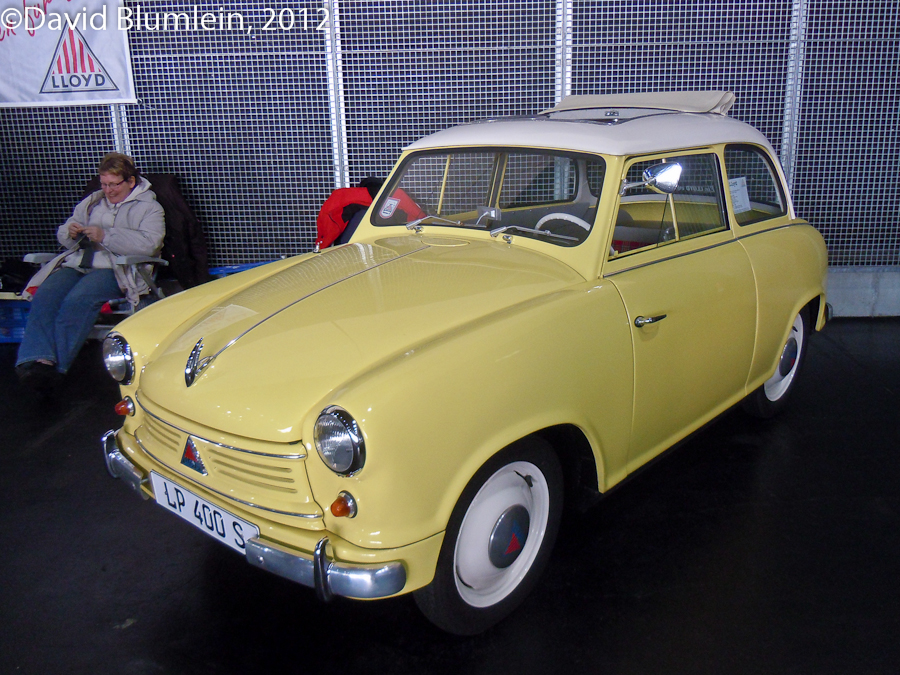 Appropriately, the Bremen Classic Car Show reflected something of the history of the north German car industry. Bremen itself was the centre of the Borgward empire but it was also the home of the Focke-Wulf aircraft factories, whose potent FW 190 fighter caused all manner of problems to the Allied air forces. Thus did Bremen invite much attention in World War Two from the Royal Air Force and Eighth Air Force bombers and by the end of the conflict the Borgward factories, which had been producing military vehicles, were about 80% destroyed. Yet the energetic Carl F.W. Borgward was to turn out Germany’s first all-new post-war production car, the Hansa 1500, and he was to achieve much success in the Fifties with his Lloyd, Goliath and Borgward vehicles. But , like so many of his ilk, the dynamic leader was not so good at the accounting and his world collapsed in 1961, partly because he was not making enough cars to be competitive and therefore profitable and because his ambitious plans for the Borgward Kolibri helicopter, designed by Professor Heinrich Focke, somewhat drained the funds!

The Borgward works were eventually sold to Hanomag who, by this time, were producing light commercials rather than cars and when Hanomag itself was swallowed by Daimler-Benz in 1971 we find the Sebaldsbrϋck factory, greatly extended, turning out Mercédès cars still today.

Bremen, in conjunction with Bremerhaven, possesses after Hamburg the largest harbour in Germany, and its most important activity is handling containers and motor vehicles. Each year more than a million containers pass through the terminal and the harbour is Europe’s leading port for the turnaround of cars – more than a million pass through the docks annually. Huge freight trains of container wagons and car transporter wagons can be seen plying incessantly night and day through Bremen’s Hauptbahnhof – Bremen is still very much involved with the motor car! 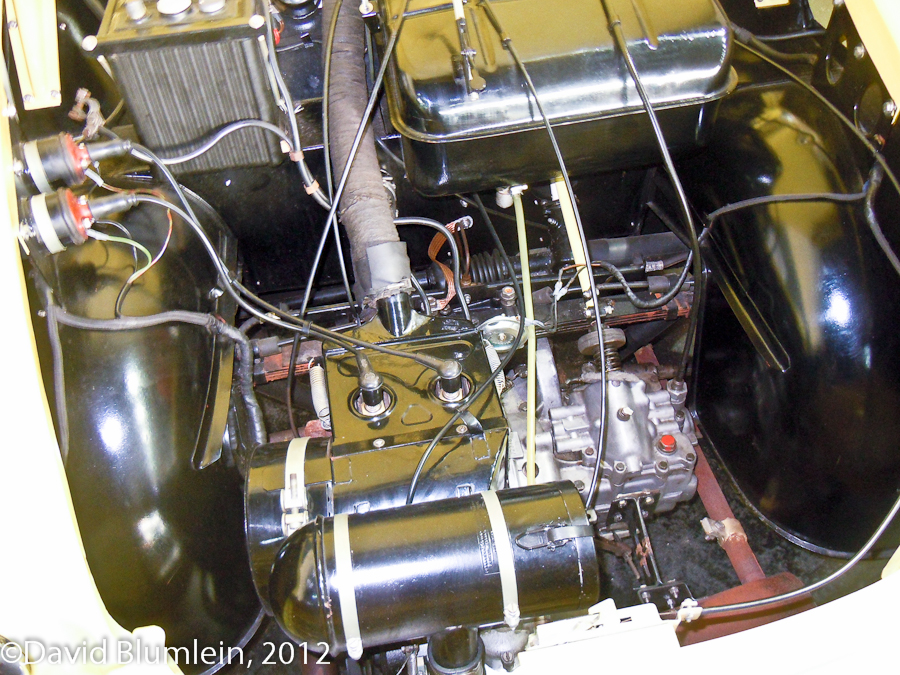 The Lloyd was a small car built to cater for the bubble car boom, the Lloyd Motoren Werke Gmbh of Bremen being part of the Borgward Group. Initially it had a 293 c.c. 2-cylinder 2-stroke 10 b.h.p. motor and the car had a wooden frame covered in leatherette. In 1953 the engine was enlarged to 386 c.c. and in 1954 steel bodies were used. They were very successful, 45,000 being sold in 1955. 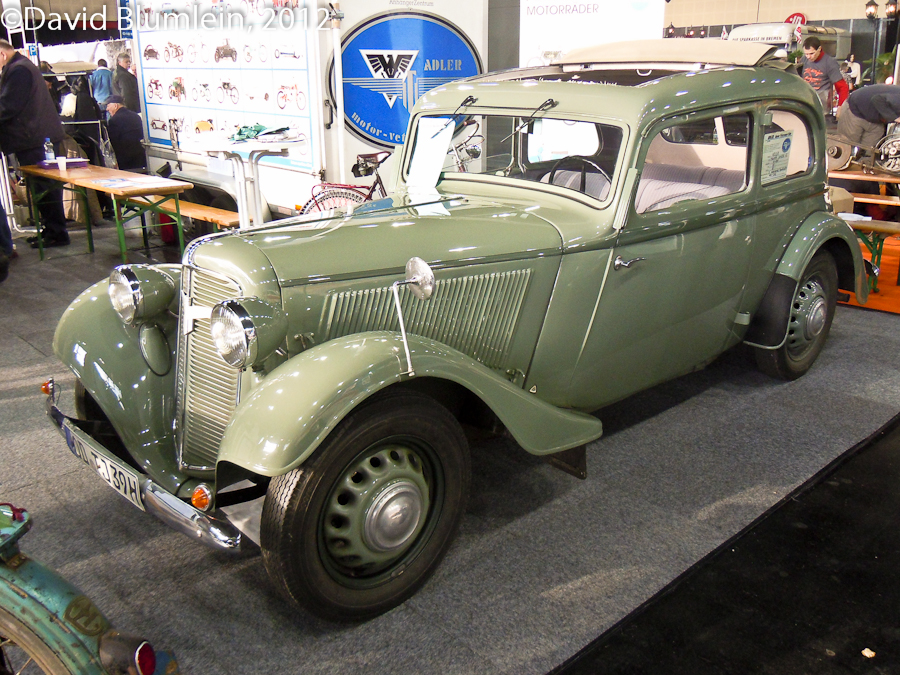 Adler (German for “Eagle”) hailed from Frankfurt am Main and by 1930 they were Germany’s third best selling car behind Opel and BMW. In 1930 the directors decided to move towards a more popular market and appointed Hans Gustav Röhr, who had just left his eponymous company, as designer. He came up with the most famous Adler of all, the 1.5-litre Trumpf which appeared at the 1932 Geneva Show. It had front-wheel drive , a 4-cylinder side-valve engine, all independent suspension and an all-steel body by Ambi-Budd of Berlin. It was, along with the 995 c.c. Trumpf Junior, a great success, 128,443 being made by 1939. It had much success in competitions (including Le Mans) and was built under licence by the Belgian firm Imperia of Nessonvaux and in France by Rosengart. 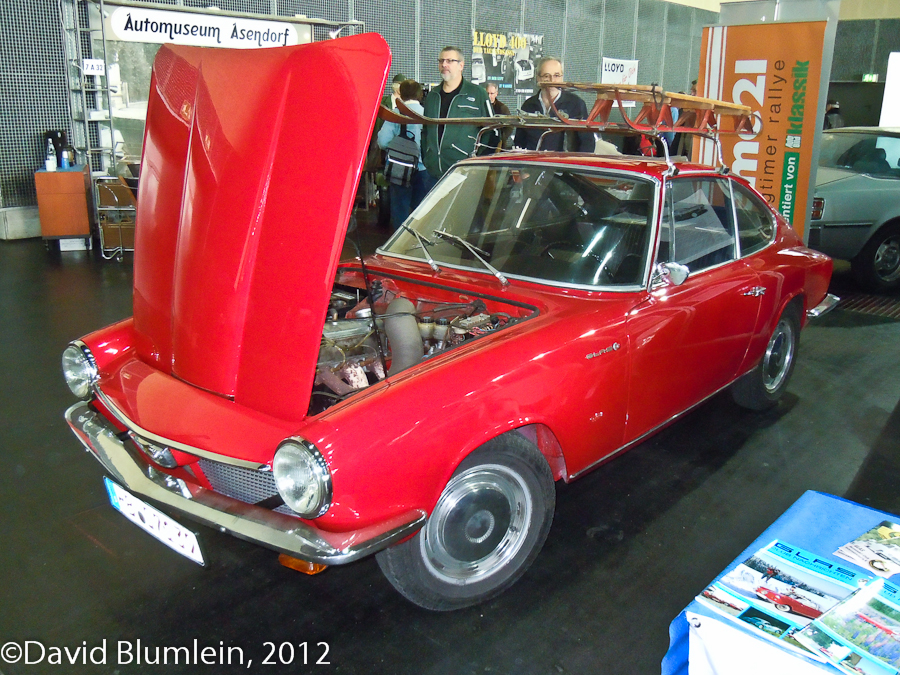 The Glas company started out by making farm machinery but in 1951 they produced a motor scooter, the Goggo. The firm is remembered best for the little 2-stroke economy car, the Goggomobil, which appeared in 1955 and which lasted until 1965. More conventional cars with 4-stroke engines gradually took over and the 1962 Glas 1004 was the first car ever to use a belt-driven camshaft. The 1300GT and 1700GT were styled by Pietro Frua  and were made from 1963-67. 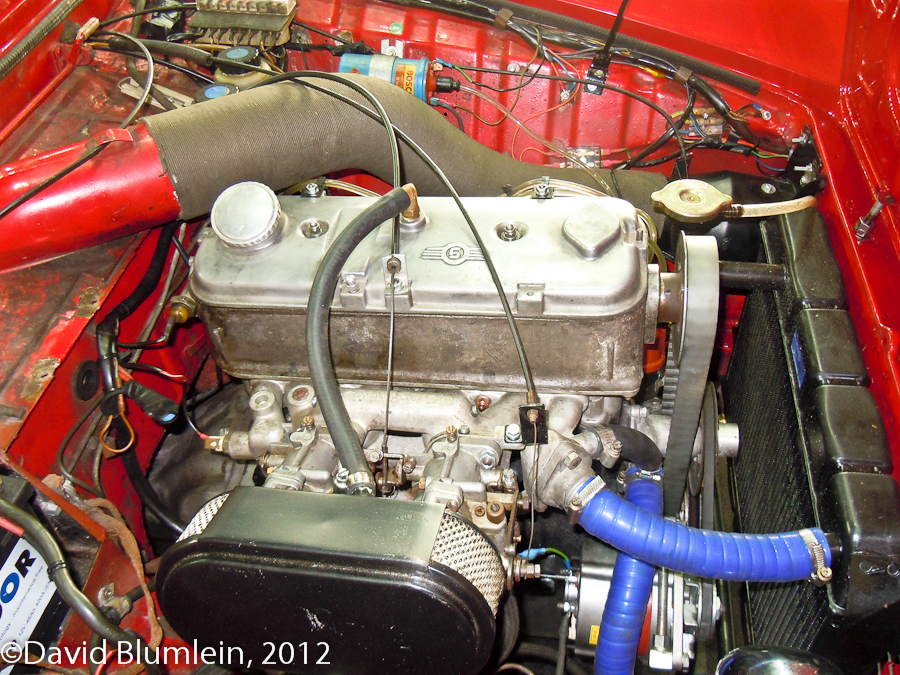 Glas cars were good but had to compete with BMW and Porsche; they also made too many different models to be commercially successful – only the Goggomobil made a profit. BMW bought Glas in 1966 and adapted some models for a while – the GTs became the 1600GT with a BMW engine before being phased out in 1968. The Dingolfing factory was given entirely new production facilities and produces 5, 6, 7 series BMWs and bodies for Rolls-Royce. Glas cars did well in competitions, the 1204TS winning the Coupe du Roi at the 1964 Spa 24 Hour race. 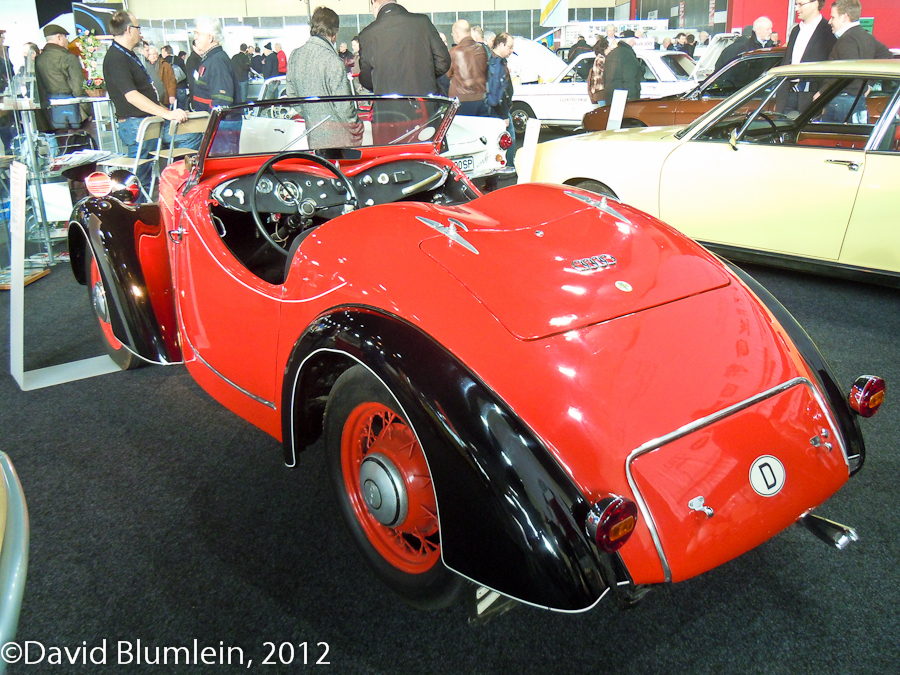 This is one of only 200 or so D.K.W.s with special bodywork by the Czechoslovakian manufacturer Jawa in Prague. 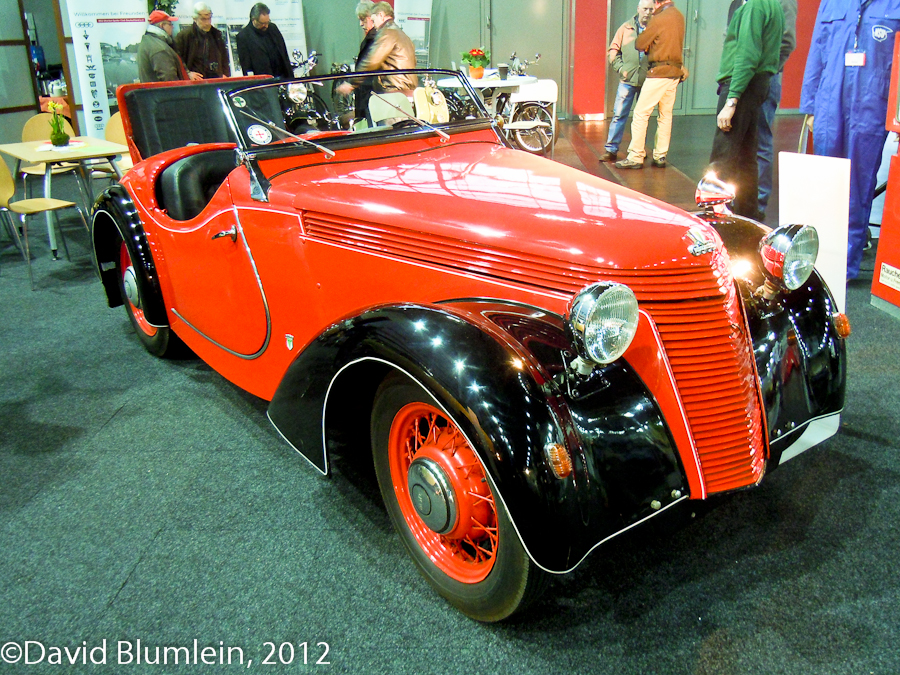 It is an appropriate collaboration because Jawa turned to the impressive D.K.W. 2-stroke mechanicals as inspiration for their own designs (as did Saab). 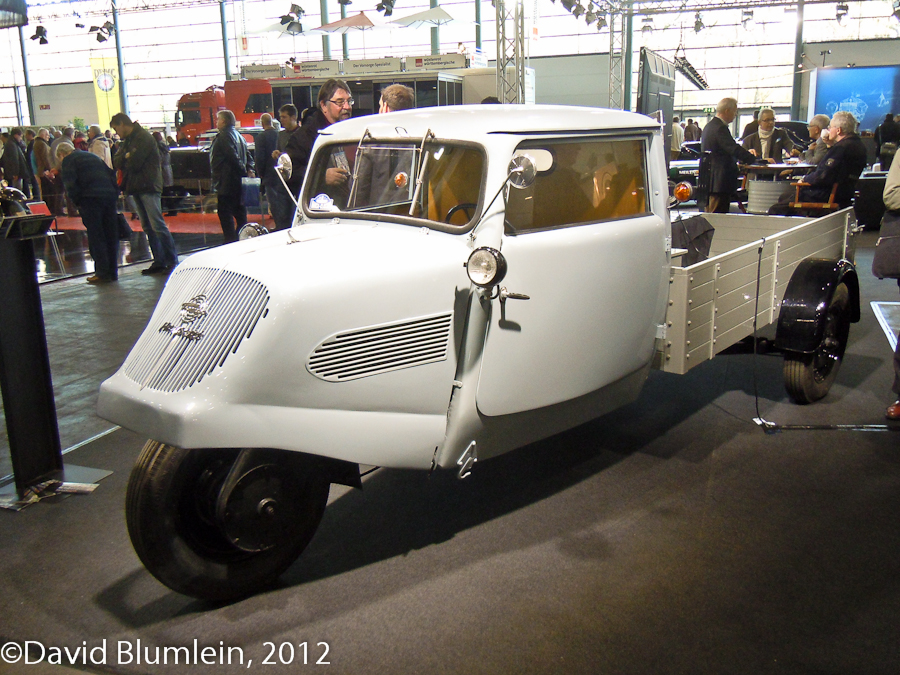 In the austere years after the war, Tempo 3-wheeled light commercials were to be seen everywhere in Germany, rugged single or 2-cylinder front-drive workhorses, usually with ILO 2-stroke engines. Car versions were made in small quantities but this 396 c.c. example is typical of the Hamburg company’s products.
Eventually Hanomag took over and then Daimler-Benz. Tempo made an interesting twin-engined military car, the G 1200, which was used by the Wehrmacht and armies of several other countries. 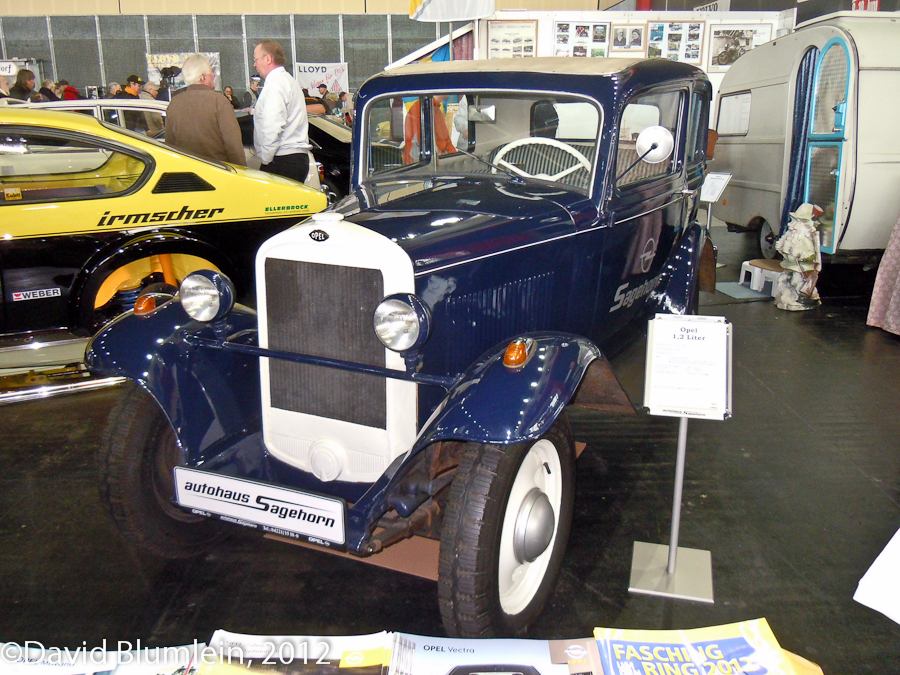 In 1931 the Opel 1.2-litre, styled like a Fiat, replaced their 4/20 model and it became Opel’s biggest seller by far between 1931-35. It was in turn replaced by the P4 briefly and then by the more familiar unit-construction Olympia and Kadett models.