A trip up to the NEC with our Special Correspondent to the Footman James Classic Car Show is an educational experience, one that I would not miss for the world. Here is his look at some of the Rare and Interesting cars that were on show. 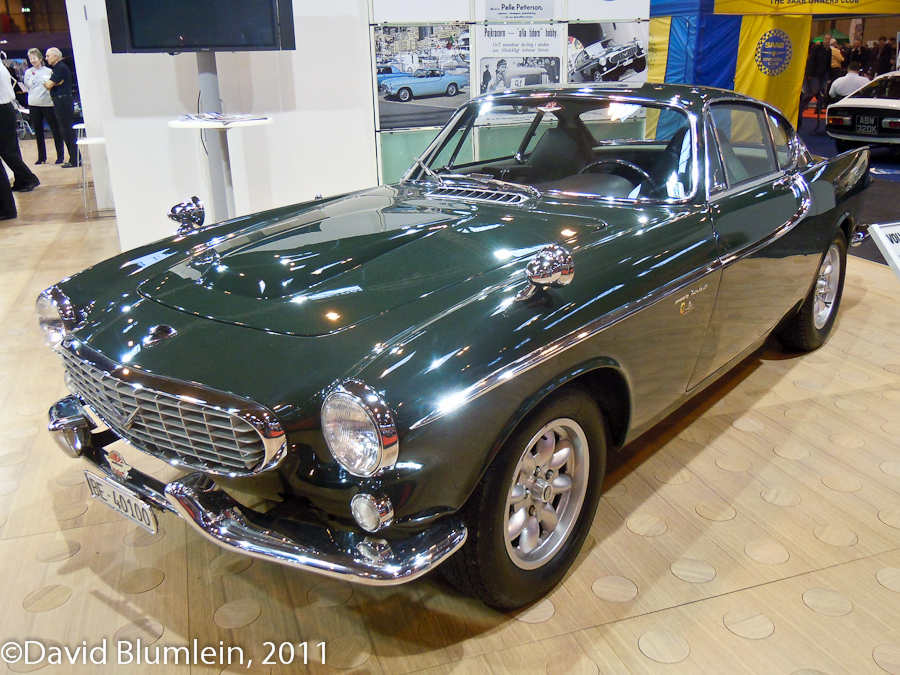 In the early 1960s Aston Martin commissioned Tadek Marek to design a smaller version of his 3.7-litre DB4 engine. Rather than create the same engine minus two cylinders, Marek opted to develop a completely new 4-cylinder engine. Three prototypes were built and it was decided to fit one into a  Volvo P1800 as a test bed. 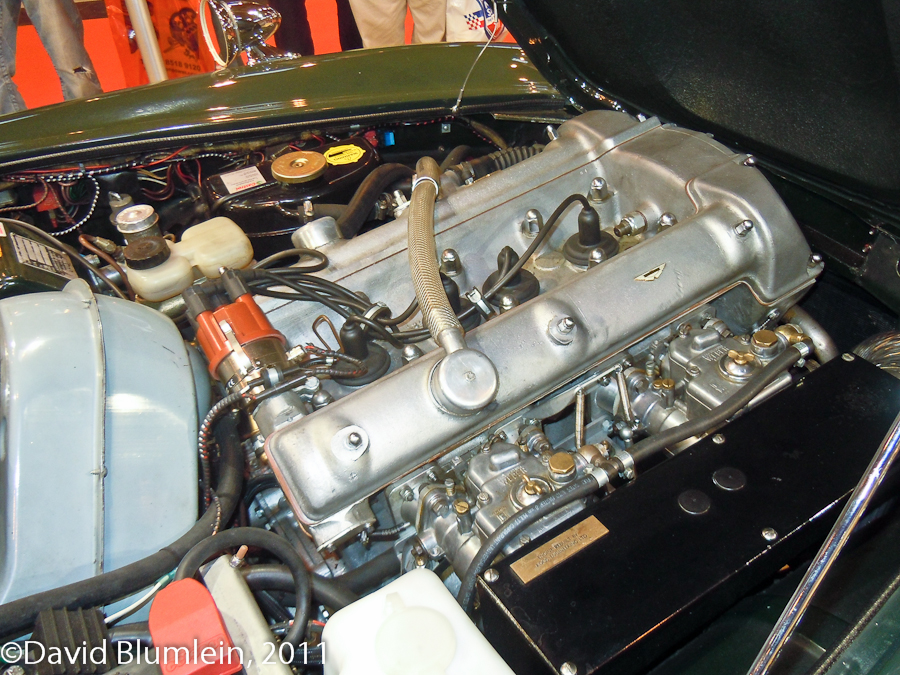 It worked quite well although 30 kgs heavier over the front axle but Aston Martin realised that the engine would be too expensive to produce and the project was abandoned. The Volvo P1800s were assembled initially (1961-1963) by Jensen Motors of West Bromwich as there was insufficient space at that time in Volvo’s Swedish factory. 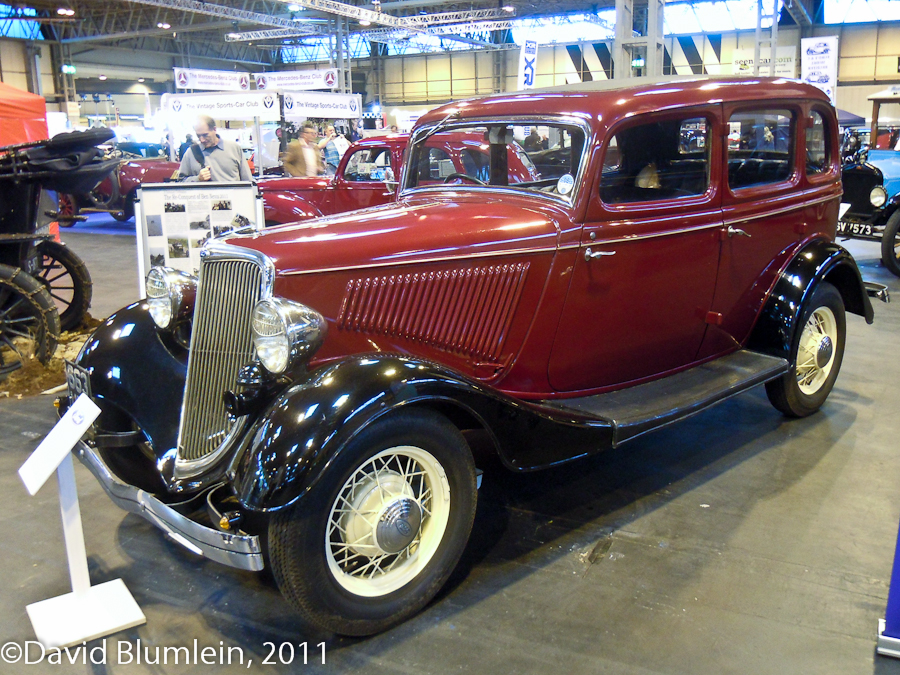 We’ve all heard of the Ford Model T, the Tin Lizzie, of which 15 million were made. In 1927 Henry Ford introduced his Model A as a replacement and then in March 1932 he announced his famous flat-head V8 which went on to be produced for the next 21 years. 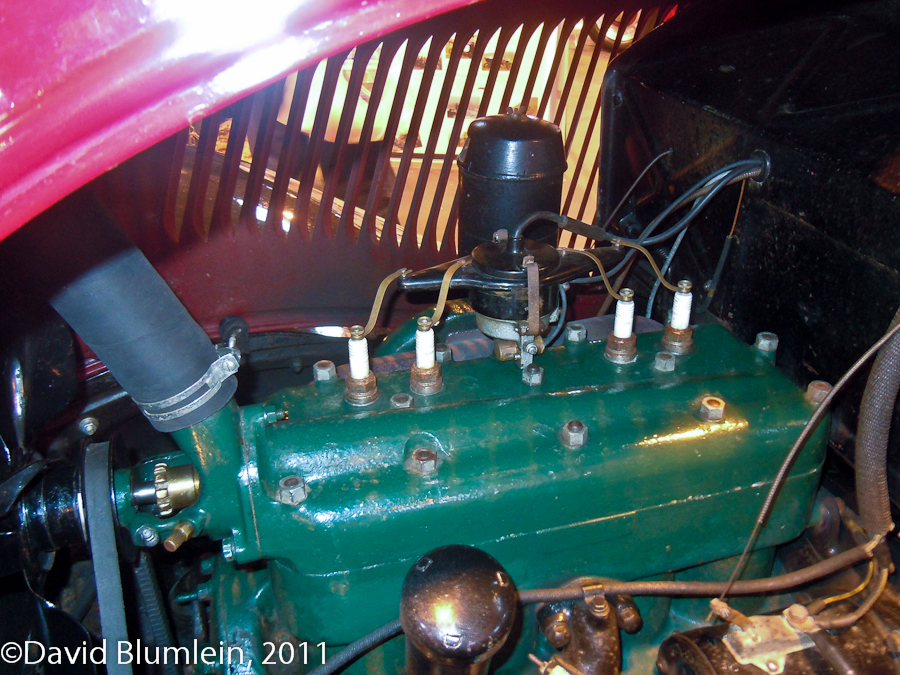 So what is a Model B? Basically it is a V8 chassis and body with the Model A 4-cylinder side-valve engine. It had a short production run in its home country, March to September 1932, although the 4-cylinder option remained available for cars and commercials up to 1934 and longer at Dagenham. Ford alone has since made over 100 million V8 engines! 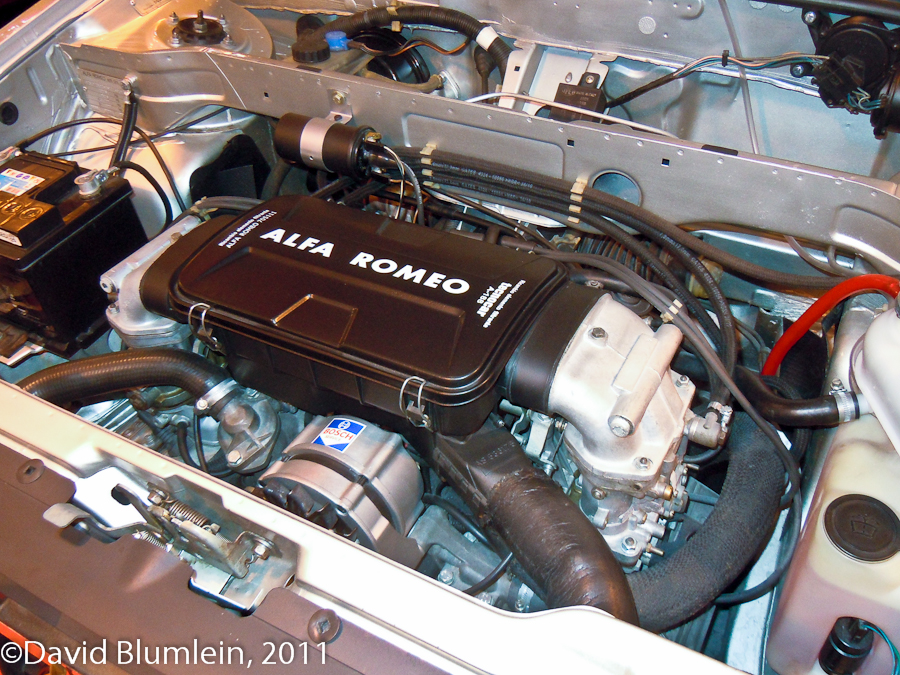 Alfa Romeo was state-owned after 1933 and depended on Government investment to keep going. In the 1930s there was plenty of military work to satisfy Mussolini’s imperialist ambitions and the company’s chief output was lorries and aero engines. After the war Alfa was able to turn to the mass-production of cars for the first time with the excellent 1900 but by the 1980s more investment was needed to replace the marvellous Alfa Sud which had been built in the factory near Naples. 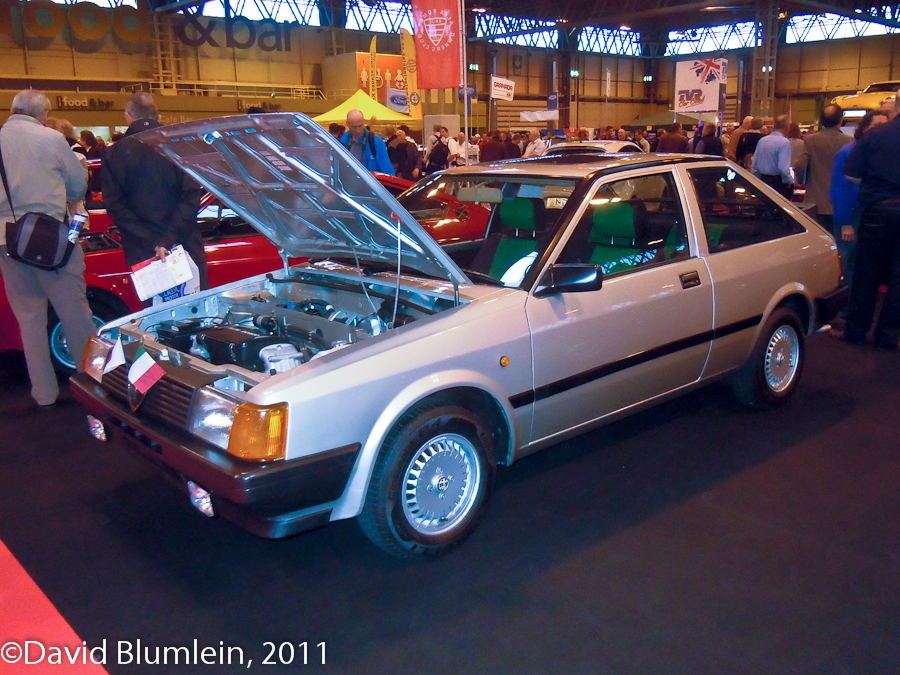 In 1984 a stand-by was hurriedly concocted, the Arna. It was a Nissan Cherry body with the front suspension, engine and gearbox of the Alfa Sud transplanted into it. It was assembled in the Naples plant and you could buy either an Alfa Romeo Arna or a Nissan Cherry Europe – apart from the badges they were identical. 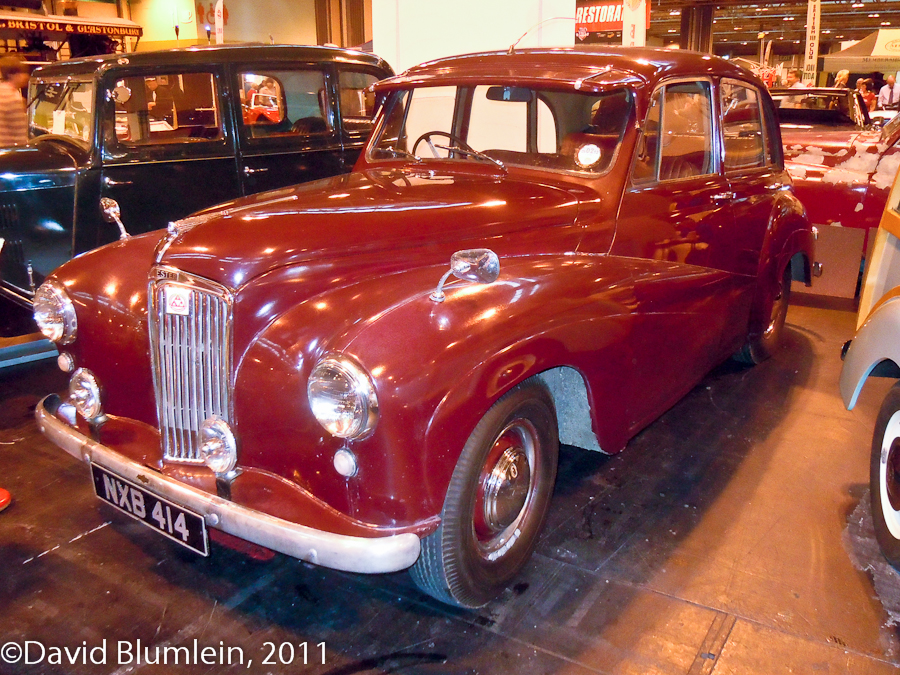 Frederick Lanchester was one of the world’s outstanding car designers who pioneered so many of the features we take for granted in our cars today. I like to single out his brilliant concept of the “ counter-balance shaft” that designers resort to when they want to smooth out the inbalances inherent in larger capacity four-cylinder engines.

His eponymous firm was taken over by the BSA-Daimler group in 1931 and then some of the cars were little more than badge-engineered Daimlers. However, this process was reversed when the company put the Lanchester 14 on the market in 1951. It was a 2-litre OHV four-cylinder car with, interestingly, independent front suspension by laminated torsion bars. The car spawned in 1953 the six-cylinder 2.5-litre Daimler Conquest and a year later its twin-carburettor version, the Conquest Century.

Quite out of character the Daimler company entered three of the latter for the Touring Car Race at the 1954 Silverstone International Trophy meeting and, thanks to Reg Parnell and George Abecassis, they took the first two places in the 3-litre class; Ken Wharton’s car was unable to avoid a spinning competitor. 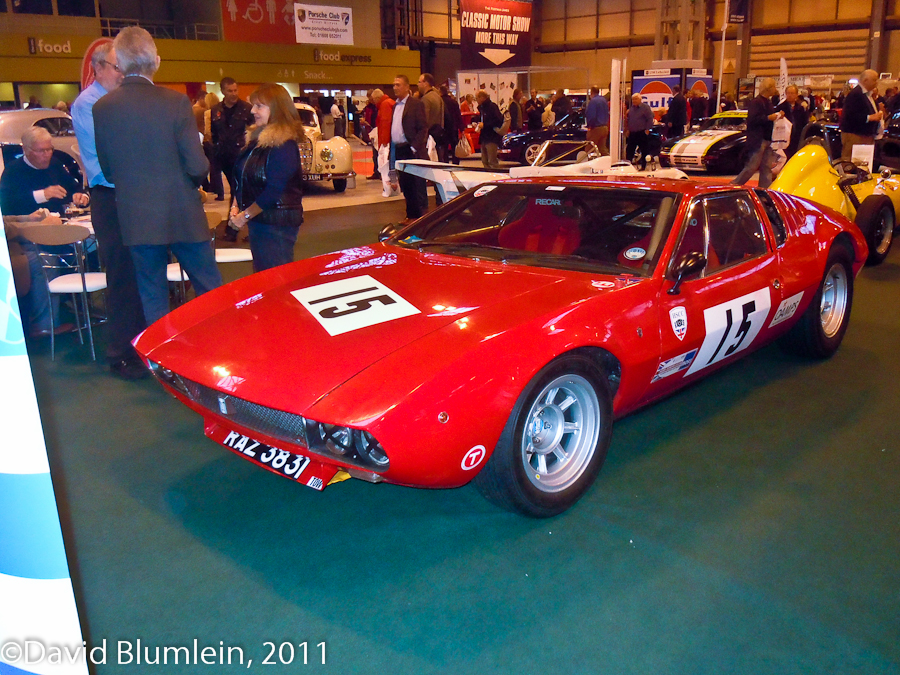 Alejandro de Tomaso was an Argentinian racing driver who drove in the 1950s in sports car races with a Maserati and OSCA. Having expressed strong opposition to the Peron régime , he found it expedient to abandon his native country and to settle in Italy whence had come previous generations of his family.

In Modena in 1959 he started up his own company. At first he made some prototypes and single-seater racing cars, the latter mainly for the recently introduced Formula Junior category, and even some cars for the new 1961 1.5-litre Formula One although these generally failed miserably, only achieving finishes in national events such as the 1961 Naples Grand Prix (5th) and the 1963 Rome Grand Prix (4th).

In the meantime he was developing road-going production cars, the first being the Vallelunga in 1963, a mid-engined GT coupé with an aluminium backbone chassis and a Ford Cortina engine, some fifty or so being completed. With an eye on the Shelby Cobra market in the U.S.A. he developed this backbone theme for a bigger car which appeared at the 1966 Turin Motor Show. This was the Mangusta – Italian for mongoose, the only animal that kills cobras! The car had a 4.7-litre Ford V8 with bodies coming from Ghia, styled by Giugiaro. It was rather heavy with 66 per cent of its weight over the rear wheels yet 400 cars were made up to 1971. It was  succeeded by the more successful Pantera, a steel monocoque design which had the benefit of much Ford investment. 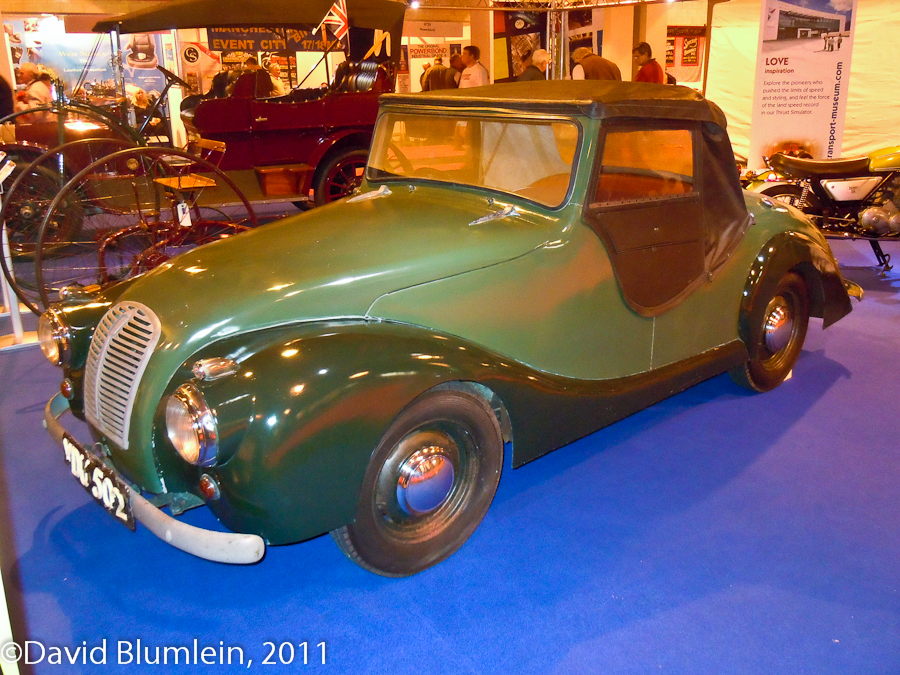 Coventry-Victor was an engineering firm that specialised in supplying small capacity flat-twin side-valve engines to other manufacturers. In 1926 it produced its own three-wheeled car with a chain-driven rear wheel and in 1932 this was up-graded using more luxurious bodywork designed by C.F.Beauvais who was responsible for styling the Avon-bodied Standards, Singers and Crossleys of the Thirties.

In 1949 Coventry-Victor decided to build a four-wheeler and constructed six prototypes, four saloons and two open-bodied, which were code-named Venus. These had 747 c.c. flat-four engines mounted forward but driving the rear wheels.The car on show appears to be the sole survivor of this abandoned project as all were ordered to be cut up. It has been residing in the Coventry Transport Museum’s reserve collection and it is a pleasant surprise for it to be seen on public display at last! 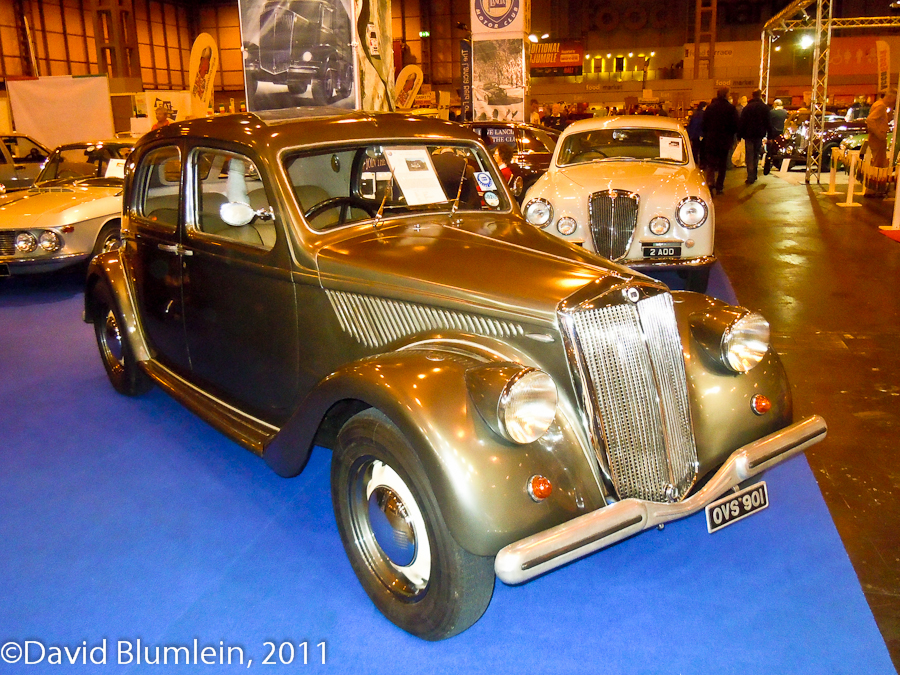 This is the last of Vincenzo Lancia’s masterpieces and it went into production in February 1937, sadly the month of the company founder’s premature death. Lancia had a deserved reputation for producing well-engineered and technically innovative cars and the Aprilia carries on Lancia’s enviable tradition.

At the start of the Thirties Lancia realised the need to produce smaller-engined cars to appeal to a much wider segment of Italian society and the 2-litre Artena and the 1.2-litre Augusta were launched, two excellent cars. The Aprilia was conceived to take over from them. It possessed a pillarless monocoque saloon body with “fast-back” styling at the rear, the whole yielding an admirable (for the time) co-efficient of drag of just .047. It was powered by a typically Lancia V4 engine but this time it was a fresh design with hemispherical combustion chambers and had a capacity of 1.3-litres at first growing two years later to 1.49. Front suspension was Lancia’s independent sliding pillar arrangement from the Lambda but at the rear was a completely new independent design utilising a transverse leaf spring and torsion bars while the rear brakes were mounted inboard.

Such an exciting specification lent itself to sporting achievements – for example, Luigi Villoresi used a special Zagato-bodied Spyder version to win its class in the 1938 Mille Miglia and normal production saloons were still winning their class in the Mille Miglia as late as 1951 and 1952 .The Aprilia’s eventual successor, the Vittorio Jano-designed Aurelia, can be seen in the background – this was another masterpiece!

What do these following two cars have in common? 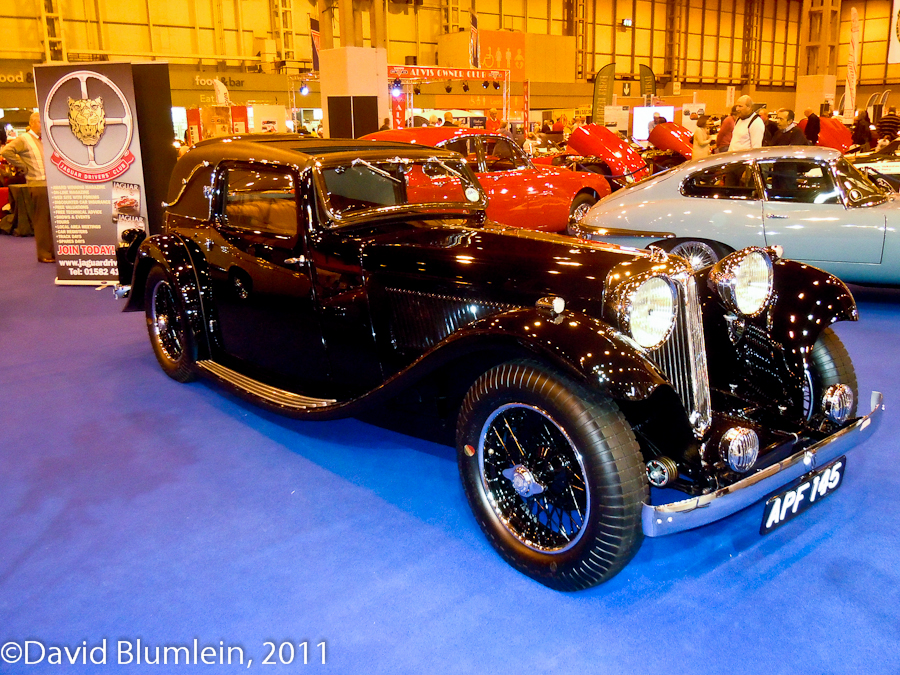 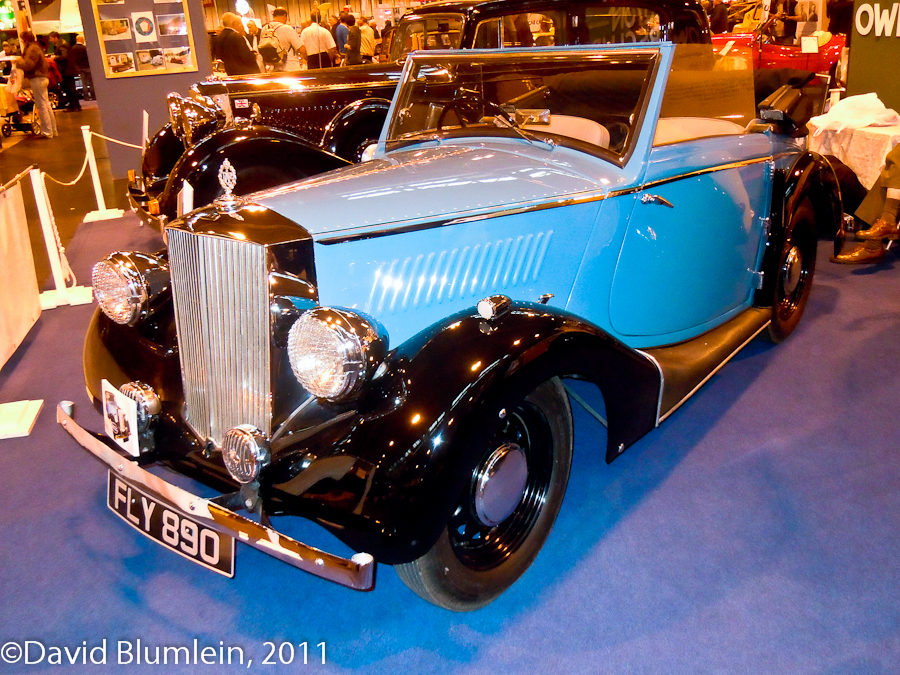 Answer: they both use chassis and mechanicals supplied by the Standard Motor Company.

The SS1, the forerunner of the line of Jaguars, used the Standard 16 side-valve engine and chassis; the Railton Ten had an unmodified 1938 Standard 10 chassis!