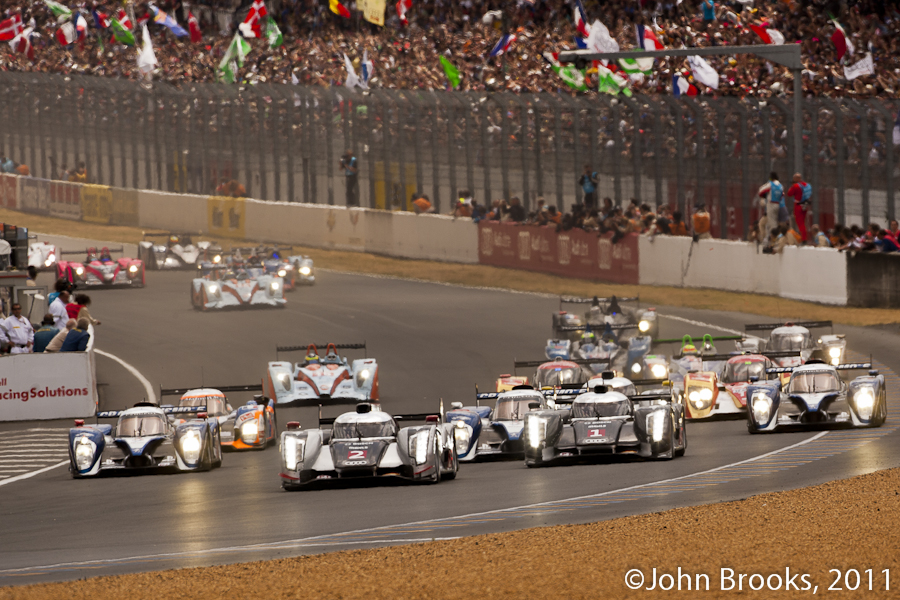 The final ever round of the Intercontinental Le Mans Cup will be held in a week or so at Zhuhai, next year the competition will be called the FIA World Endurance Championship. At the sharp end the titles are settled, so one might assume that things should be relaxed between Peugeot, the Champs, and Audi, the Le Mans’ winners. I somehow doubt this, proud teams such as represent the French and German manufacturers hate to lose, it is not in their DNA, as the phrase goes. 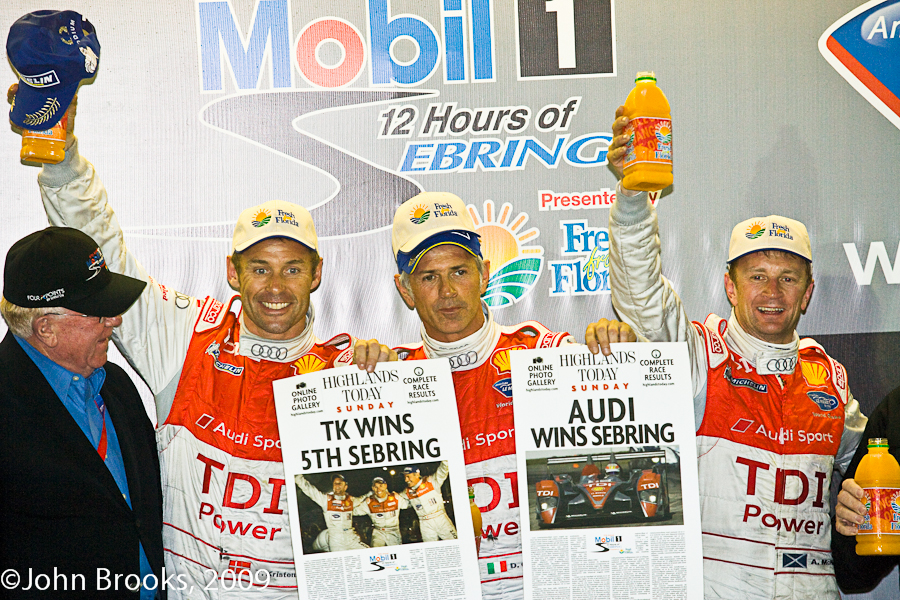 A question then that the protagonists, if not the average fan, will know the answer to. Leaving aside the 24 Hours of Le Mans for 2010 and 2011, when was the last time that Audi beat Peugeot in a straight fight? Unbelieveably you have to go back to Sebring 2009 when TK, Dindo and Nishy took the R15 to début win. That will be almost three years ago unless Audi takes the top spot next week. If this were a boxing match Audi would have counted out on a TKO.

Three years, 12 races and over 100 hours of competition; standing on the rickety photo stand at Sebring back then grabbing these podium shots, what odds would you have got on that forecast?  How has this dry run happened and how do Audi break this pattern and resume their rightful place on equal terms with their French opponents? 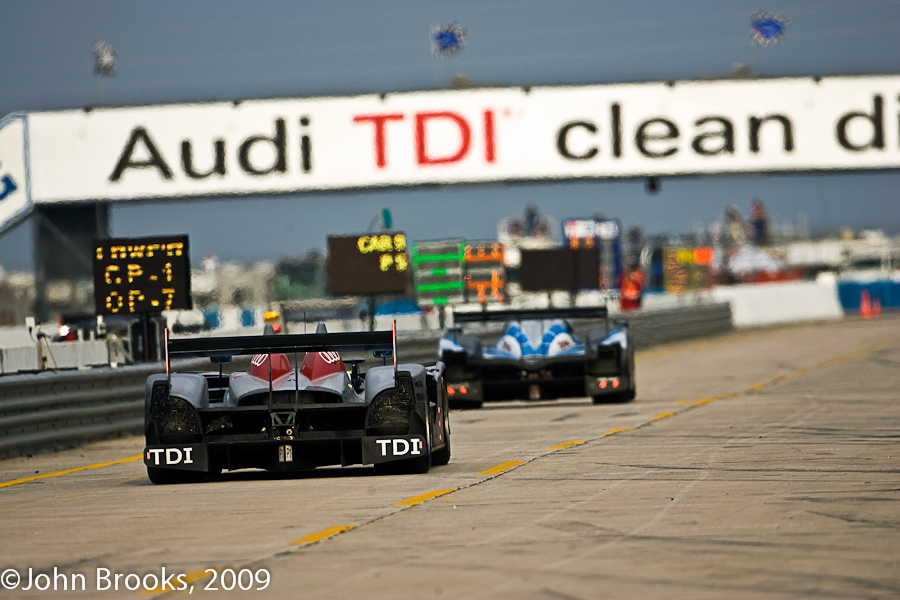 After the disappointments and failures of 2007 and 2008 Peugeot decided enough was enough. A new season and a new boss, Olivier Quisnel, sharpened their approach. Marketing distractions, like Jacques Villeneuve were dropped and Peugeot were honest enough to admit that they had to learn from the Top Dogs, Audi. 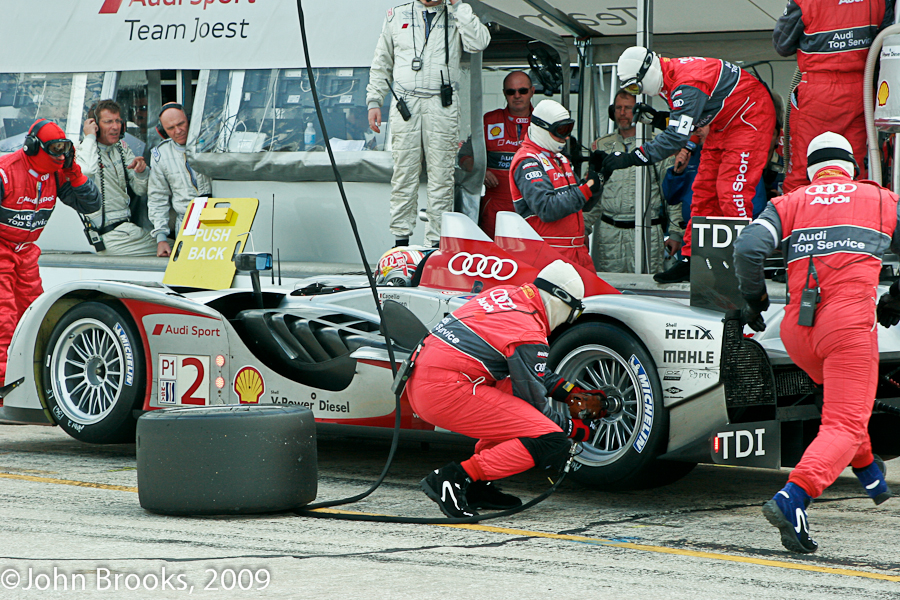 I remember Allan McNush telling me that at Sebring, a camera crew from Peugeot had recorded every Audi pit stop, “I always waved at them”. 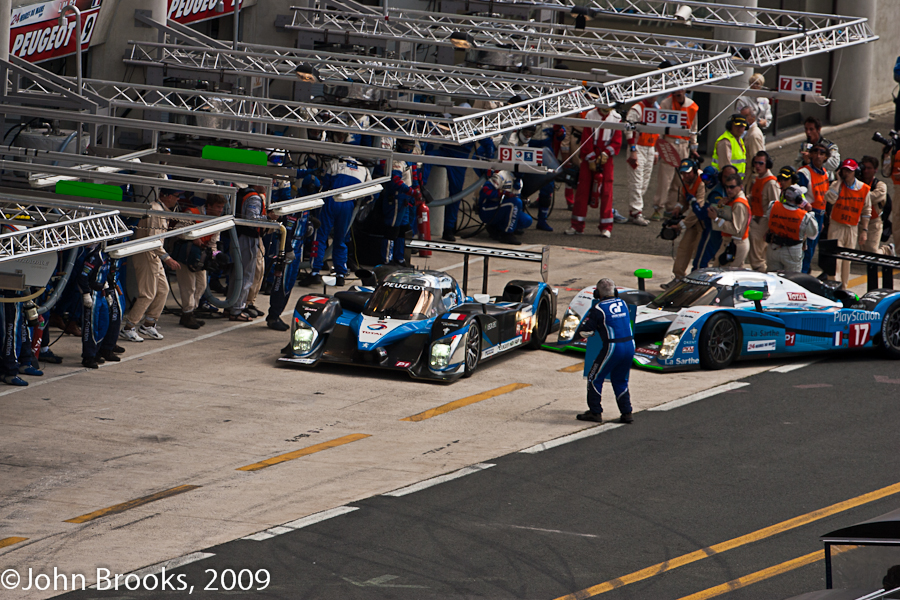 Whatever Peugeot learned from their home movies seemed to work, excepting this monumental folly. Naturally it was all the fault of the photographers and not the mob standing around oblivious……………… 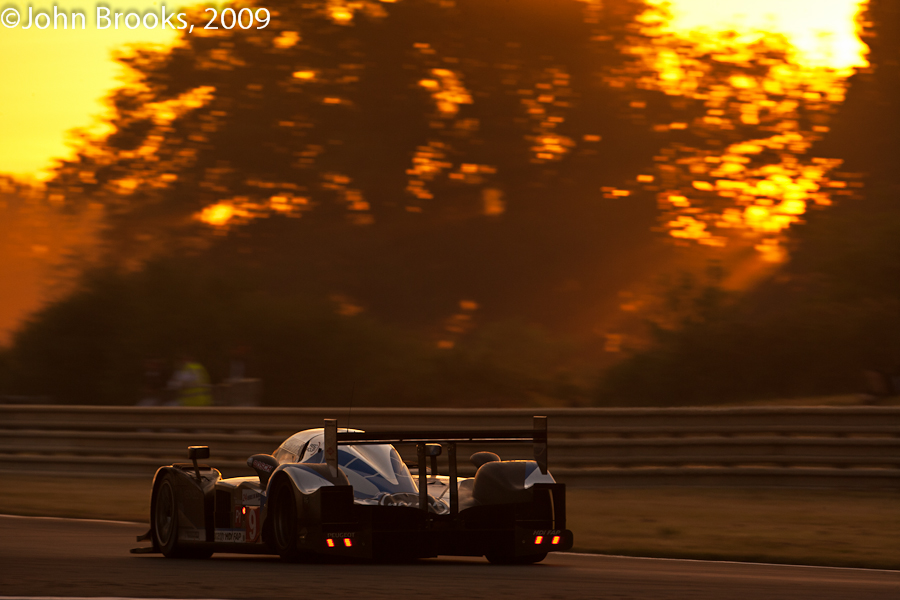 Peugeot were brilliant that weekend in Le Mans and it was Audi who always seemed to be on the backfoot. The R15 was something of a disappointment and the 908 always seemed to have pace to spare. Peugeot resembled their national rugby team when on song, almost unbeatable in that mood. 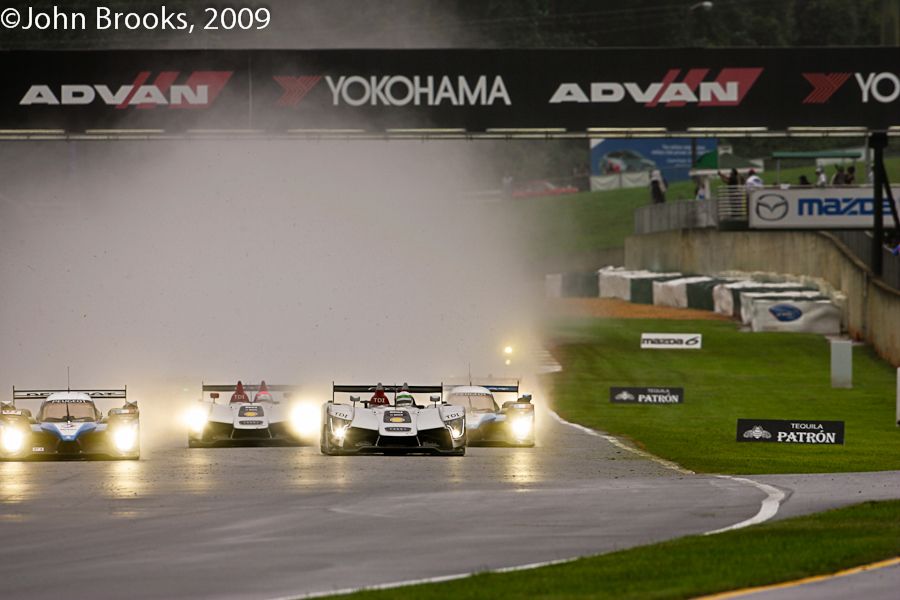 As if to reinforce the point that balance of power had shifted to the West, Peugeot even went after Audi across the Atlantic chasing them to Road Atlanta and Petit Le Mans.

A typically forthright start by McNish, who else, and a storming first stint nearly put the lead Audi a lap up. A safety car period put a stop to that and it was game on once again between the diesel rivals. 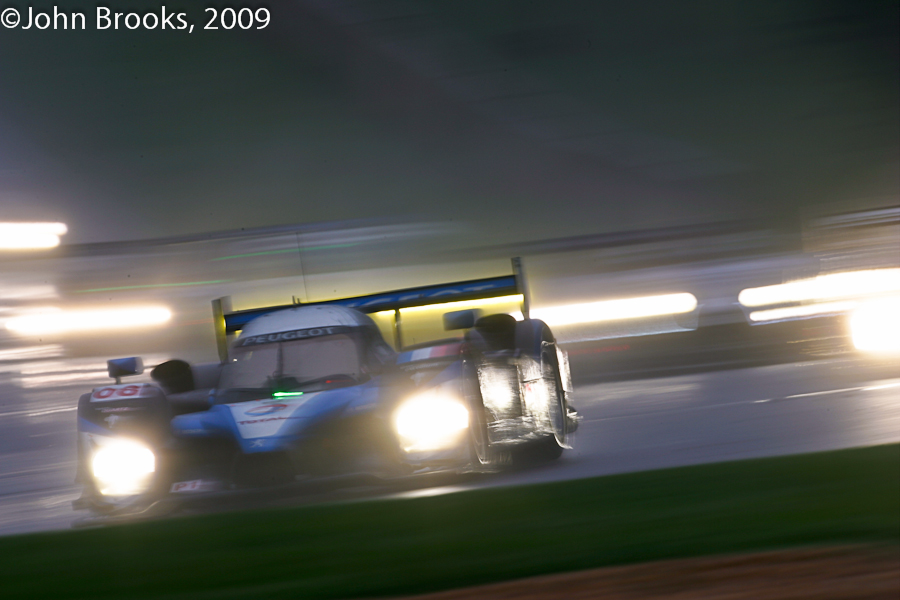 This time there was a third contestant in the race, the appalling weather. No matter what Audi did it was matched by Peugeot whose confidence was sky high after the victory at La Sarthe. 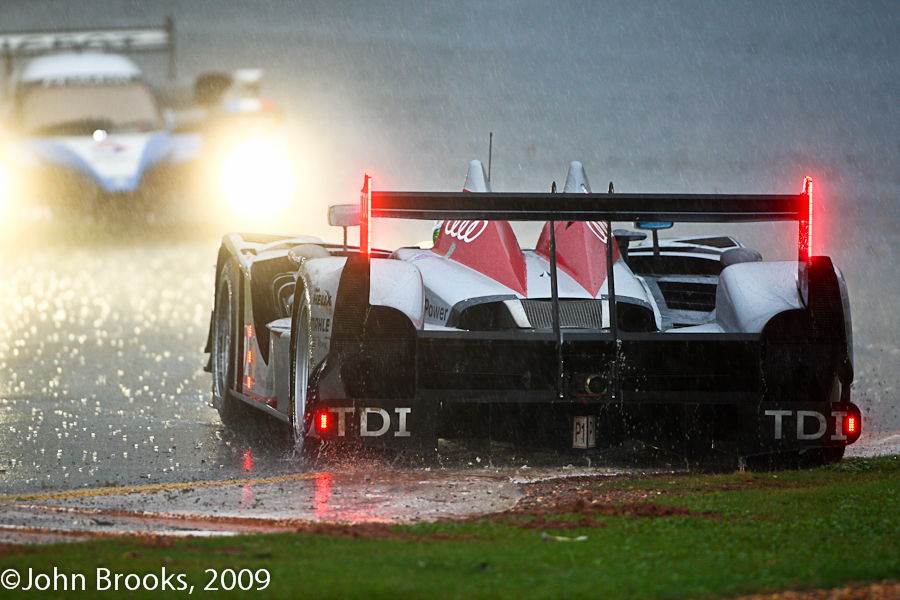 It was Audi who cracked, a couple of minor spins as a result of aquaplaning, put the French at the front. 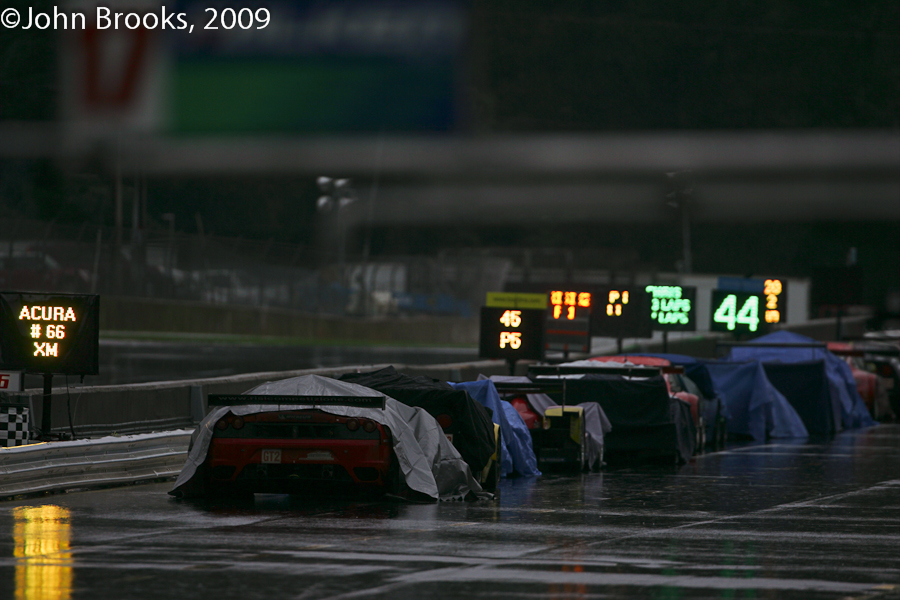 At The Car Wash

Then the race was first stopped, then abandoned. I was happy enough, carrying round a big lens or two supported by a metal pole in the middle of an electrical storm was probably not the cleverest thing to do.

So another win for Peugeot. Audi skipped the next confrontation at Sebring, they needed more time to develop the R15+………most of us were not convinced. There is nothing quite like racing around Sebring for 12 Hours to pinpoint any weaknesses in the team or cars. 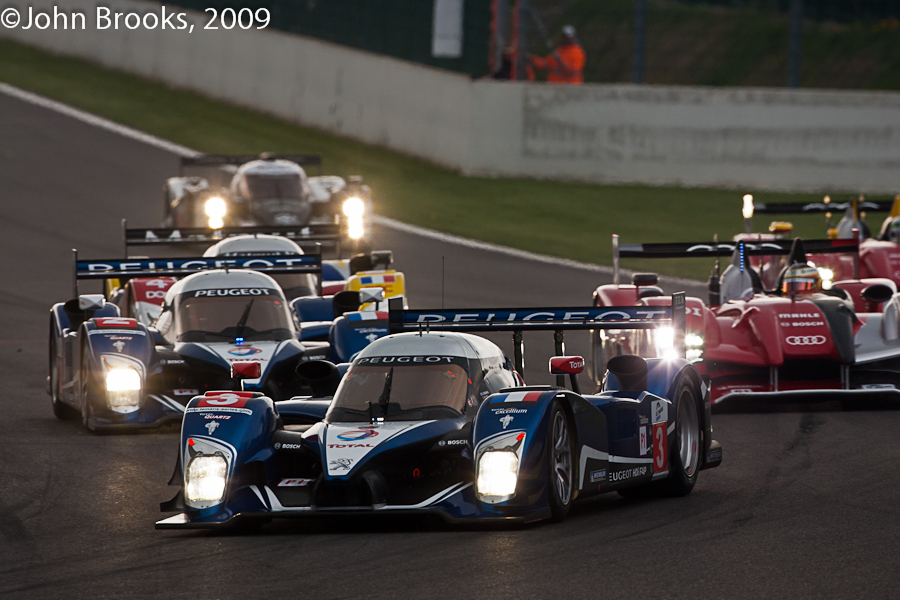 The next contest at Spa seemed to confirm the impression that Peugeot would beat Audi at Le Mans. Peugeot won at a canter leaving the Audis struggling. It was a bit of a confused race with the farce of the timing screen failing after a power cut. The race was halted while the problem was sorted…..’tis whispered that someone had forgotten to fill the emergency generators….never in Belgium said I. 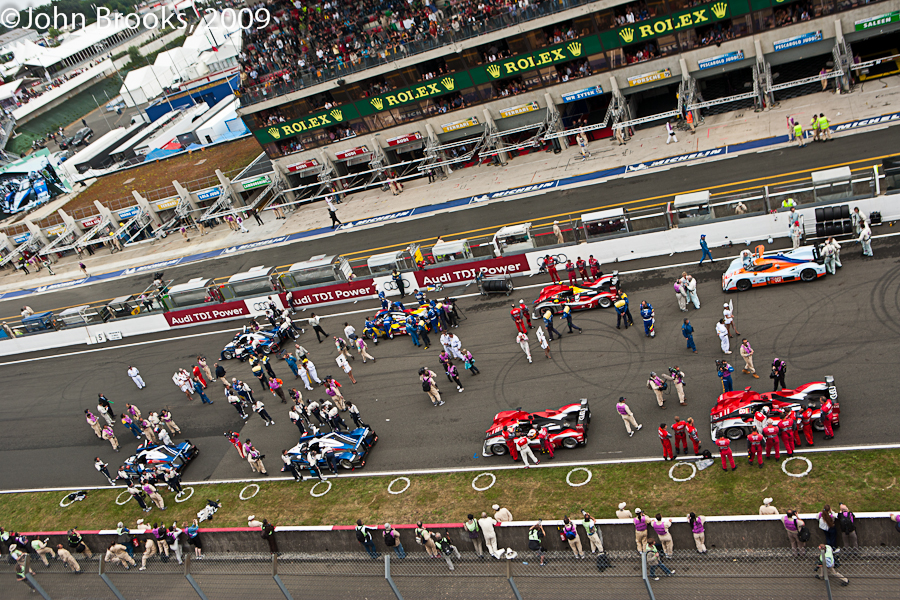 View From The Top

The run up to the 24 saw Peugeot grabbing the first two rows on the grid, it looked as if it could be a really long race for Ingolstadt’s finest 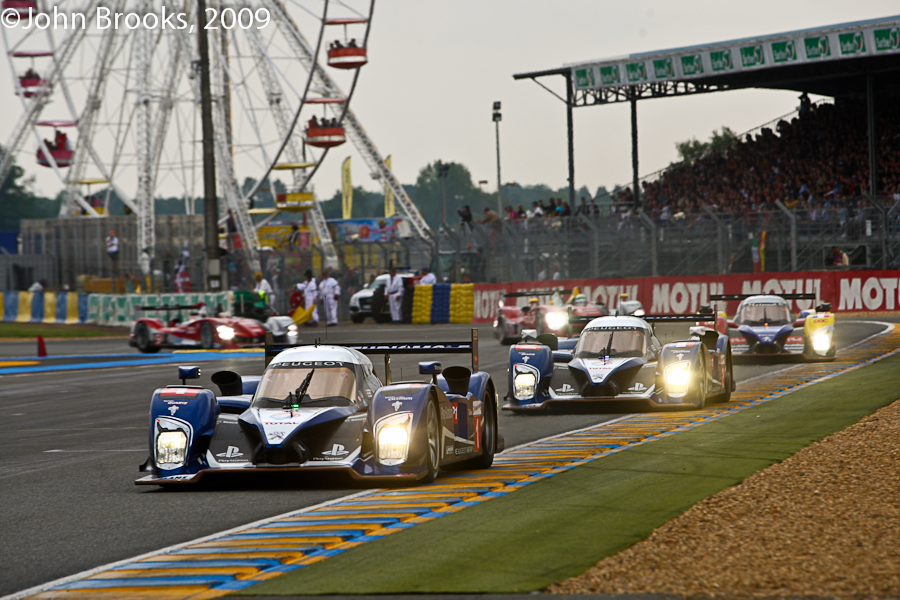 The first hour or so of the contest confirmed that Audi had no answer for the French pace.