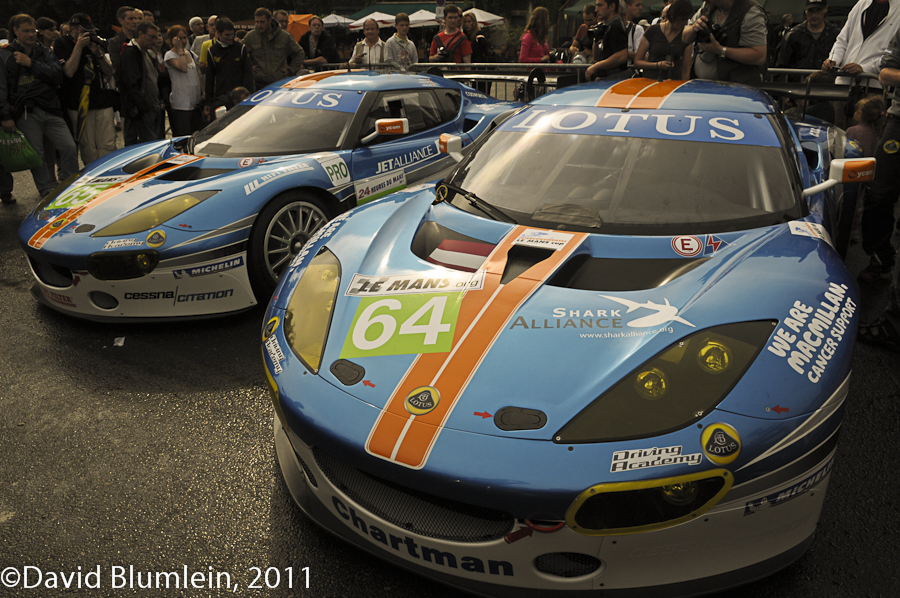 What have these Lotus types in common: Mark IX, Eleven, Fifteen, Elite, Elan, 47, Esprit, and Elise GT1? Answer: they have all taken part in the Le Mans 24 Hour race. In fact Lotus first raced at Le Mans in 1955 with a Mark IX Climax-engined car but Colin Chapman was disqualified when a rule infringement was committed after leaving the track at Arnage in the early part of the race. Now in 2011 Lotus is back with the V6 Evora and so it is apposite to look back to the marque’s first success in the famous event. 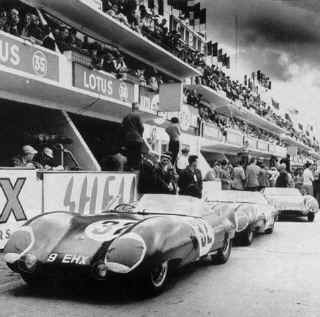 This took place a year later in 1956 when the company decided to enter a team of three of its new Eleven models. New regulations drawn up in the aftermath of the 1955 disaster meant that the cars needed considerable modification: cockpits had to be bigger than the original and so the chassis frames were built wider at the centre section sweeping in abruptly before the rear wheels; a full-width windscreen of minimum depth and with a wiper was needed – Lotus fitted a sloping screen which wrapped around the sides. There were bucket seats and twin spot lights on either side of the air-intakes; all lights were mounted behind plastic covers. The cars had Coventry-Climax single cam“fire-pump” engines,, one of 1500c.c. and the other two of 1100c.c. John Eason Gibson was the Team Manager and the team was based outside of Le Mans at the Auberge de St Nicolas at Mayet. 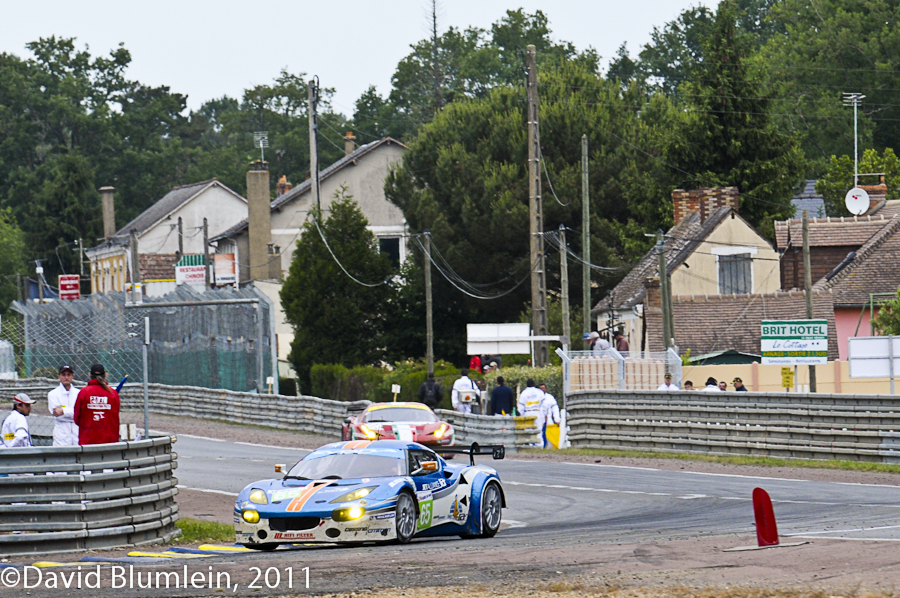 There was also considerable modification to the circuit. That narrow two-car road past the pits just had to go! The whole pit area was widened and new pits were built and entry to the pits was strictly controlled by the need to keep to the right of a yellow line; any transgression incurred instant disqualification. Changes were made at the Dunlop Curve and at Arnage, the section at Maison Blanche was resurfaced and the whole pits signalling operation was transferred to the exit at Mulsanne Corner. All this work inevitably took time and the race was postponed until the last weekend in July, one of only three times that the race has not been held in June (the others being in 1923 when the very first race was held in May and 1968 when the May riots in France pushed the race back to September). 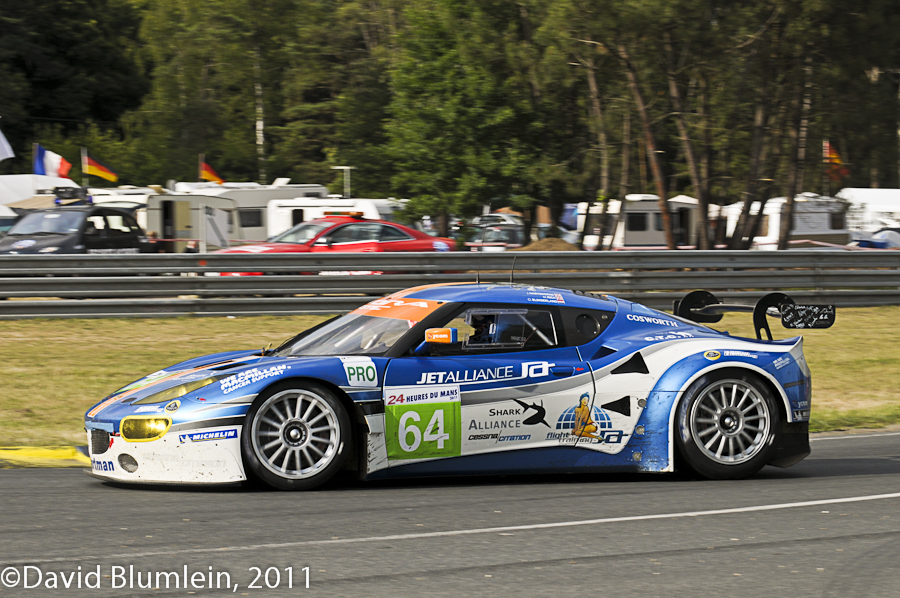 The three Lotus entries were: Car no.32   1500  Chapman/Mackay Fraser, Car no.35    1100  Allison/Hall, Car no.36    1100 Jopp/Bicknell. The race started in the wet but Chapman managed to complete the first lap in 16th place! By 5pm as the race settled he held on to 17th position behind his main opposition, the Porsches and a Maserati which soon broke. By the mid-day on the Sunday the Lotus lay second in class behind the leading Porsche but a broken big-end bolt ended its run. In the meantime the two 1100c.c. cars were locked in battle with the Hugus/Bentley Cooper. The weather was dreadful during the night and at dawn Cliff Allison had the misfortune to hit a dog on the Mulsanne Straight which resulted in the demise of the dog and the retirement of the Lotus. The remaining Lotus, however, was doing much better and by the end of the race had gained a lap over the American-driven Cooper, giving Peter Jopp and Reg Bicknell a win in the 1100c.c. class, Lotus’s first success in the Le Mans 24 Hours. They finished 7th overall and came 4th in the Index of Performance. This was the race when Ecurie Ecosse won for Jaguar after the works cars had suffered all sorts of calamities. 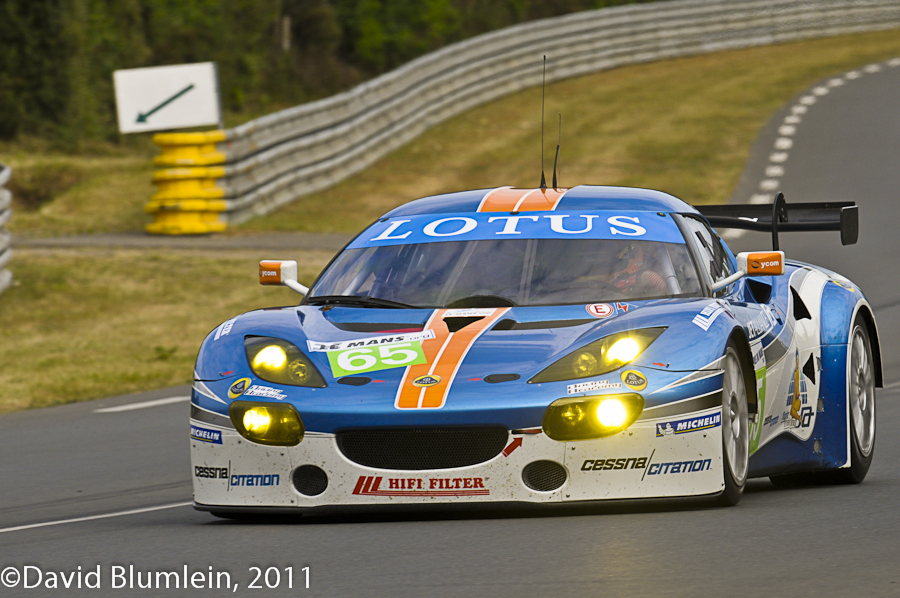 Four years later the company’s first proper road car, the Elite, went on to win its class for six consecutive years. Now the marque is back with the new GTE version of the Evora, a car in the early stages of its development. The two cars, run in collaboration with the factory by the Jet Alliance team, were: No. 64  Rich/Slingerland/Hartshorne, No. 65  Mowlem/ Rossiter/Hirschi. In the race the no. 65 car ran with practically no problems, just a fifteen minute stop to change brakes. It finished 22nd overall out of fifty-six starters and 7th in class. 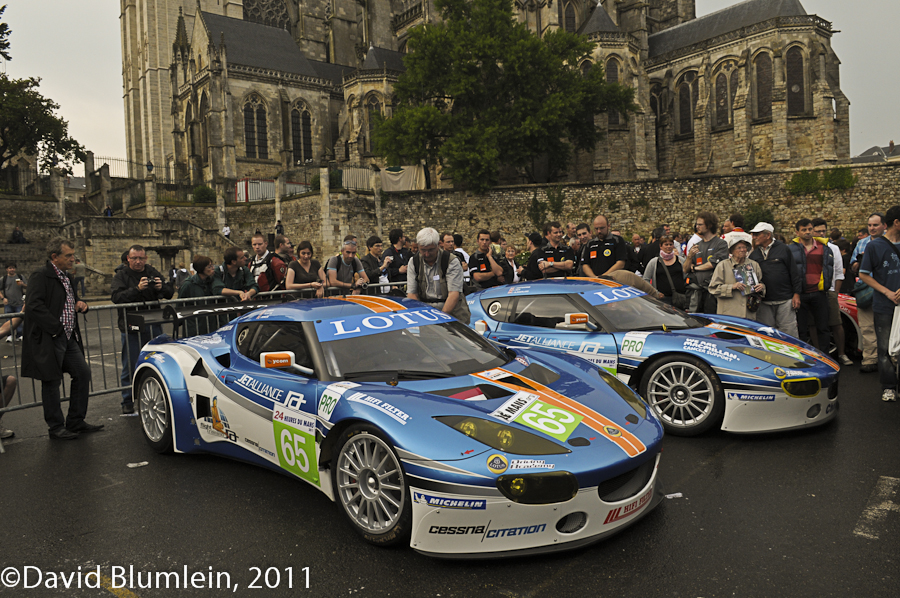 The other car had some bad luck – Martin Rich was forced off and hit the wall, causing a bit of damage. In the following stint John Hartshorne was almost at the end of his drive when a rear wheel nut came off, causing the rear wheel to come off and the ensuing damage rendered the car too dangerous to drive; it was therefore abandoned near the end of the Mulsanne Straight. With the GT4 Lotus Evora finishing the Dubai 24 Hours this year and now this GTE version  doing similarly at Le Mans, the new chapter in Lotus endurance racing is getting off to  good start.