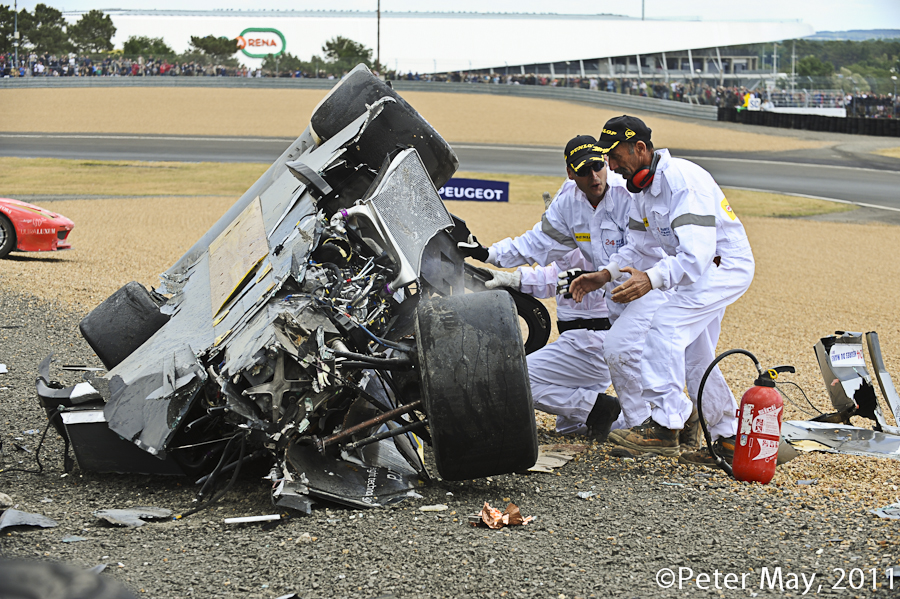 Like the twin faces of comedy and tragedy, the 2011 edition of the 24 Hours of Le Mans displayed both the excitement and the potential for disaster that is inherent in motorsport. At a track where more than 80 spectators were killed when a Mercedes plunged into the crowd in 1955, causing the sport’s worst ever accident, Allan McNish’s first hour crash produced a rain of carbon fiber filled debris with the same killer potential as its infamous predecessor.

Fortunately, no one was hurt but that happenstance was more by luck than anything else. Moreover, one has to admit, that those in danger weren’t a mass of paying spectators, but rather a far smaller group of photographers and race workers. Nevertheless, the lethality of flying debris is a fact of life that all too often has been ignored by the industry, and continues to represent a problem today despite of the safety conscious climate in which racing currently operates. 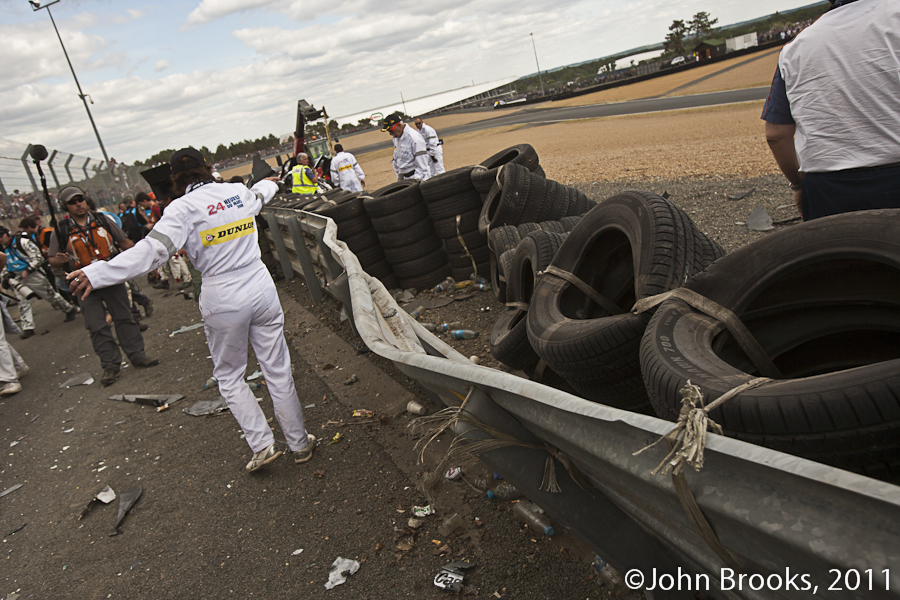 Consider for a moment the consequences of the McNish crash happening in an area where there were large numbers of spectators. Would that same luck hold? In aviation there is the phrase “tombstone engineering,” meaning that the industry learns how to fix death causing problems only after deaths occur because of them. Motorsport in general and Le Mans in particular can be said of all too often approaching the issue in the same manner, rather than trying to get “ahead of the curve.”

The accident that destroyed McNish’s Audi R18, caused in large measure by the Scotsman’s excess of enthusiasm in trying to pass a slower GT Ferrari when it wasn’t necessary under the circumstances to do, was just one of two heart stopping incidences that could have led to the kind of tragic headlines that so often call the sport’s future into question. The second incident came during the evening hours when Mike Rockenfeller’s R19 was passing yet another GT Ferrari 458 going down the nearly 200 mile-an-hour run to the Indianapolis corner. With Rockenfeller along side, the inexperienced amateur at the wheel of the Ferrari moved over, forcing Rockenfeller into the grass, where it went out of control, crashing and exploding into the Armco barrier.

Such was the ferocity of the impact that many believed there was little chance for Rockenfeller’s survival. Happily, the same stoutness of the Audi’s monocoque that left McNish virtually uninjured, did the same for Rockenfeller who suffered only a severe concussion and a cut arm. Still, the question of why race officials let the amateur drive in the first place remains. Given that most acknowledge that Le Mans, with its high speeds and the great performance differentials between the prototypes and the production cars, is inherently one of the more dangerous events on the calendar, why would one increase that danger by permitting someone with limited, or even no experience in dealing with such circumstances to race in the 24 Hours? 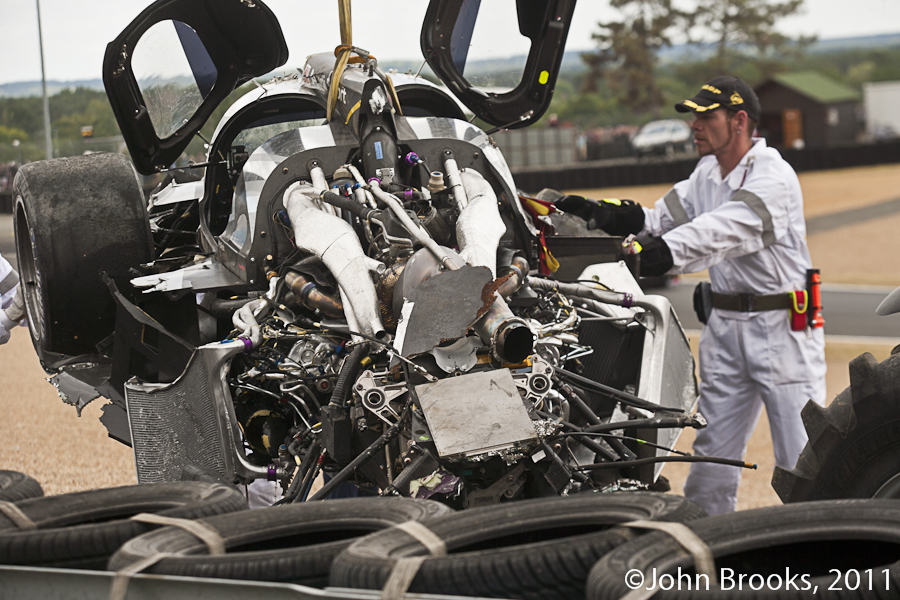 It is not for me to answer that question, but rather the ACO. In the United States both the American Le Mans Series, and the Grand Am’s Rolex championship pay not only close attention to safety, including driver skills and experience, but make safety not a primary concern, but THE primary concern. This is not to say that the ACO isn’t safety conscious, because it is. However, sometimes, one has to wonder about their thoughts on the subject.

Consider the gravel traps the ACO has put into place in the name of safety that have for years been filled with sharp edged stones more than capable of causing tire failures when they are thrown on the racing surface as they are so many times during the event. High speed tire failures are not something anyone wants, and yet, despite so much evidence that the gravel used by the ACO causes them, the Le Mans organizers have done nothing to change the situation.

Consider also that the new breed of enclosed prototypes with their huge front tires severely restrict driver visibility, an issue which played a role in both Audi accidents, one has to wonder if the ACO will rethink whether or not it needs to redress that problem as well. The ACO has spent much time trying to reduce top speeds at the Sarthe circuit in the name of safety, and are to be commended for it. But, they’ve ignored some of those pesky details that also have a bearing on the matter in the process. 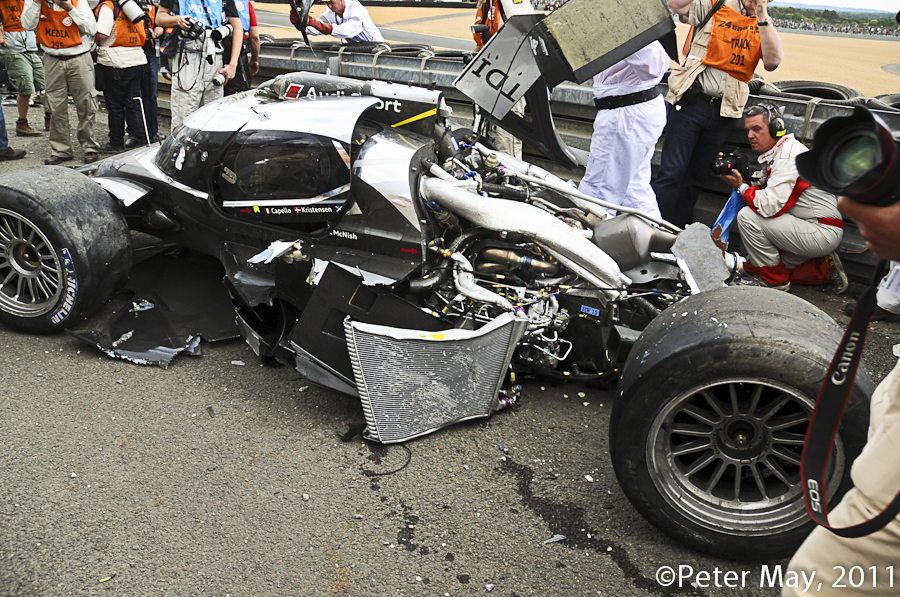 This year’s Le Mans was an exciting affair right down to the final laps with only 13 seconds separating the winning R18 from its Peugeot rival at the finish. No one wants to make it any more memorable for all the wrong reasons, something which will take both work and money. One hopes the ACO is up to the task.