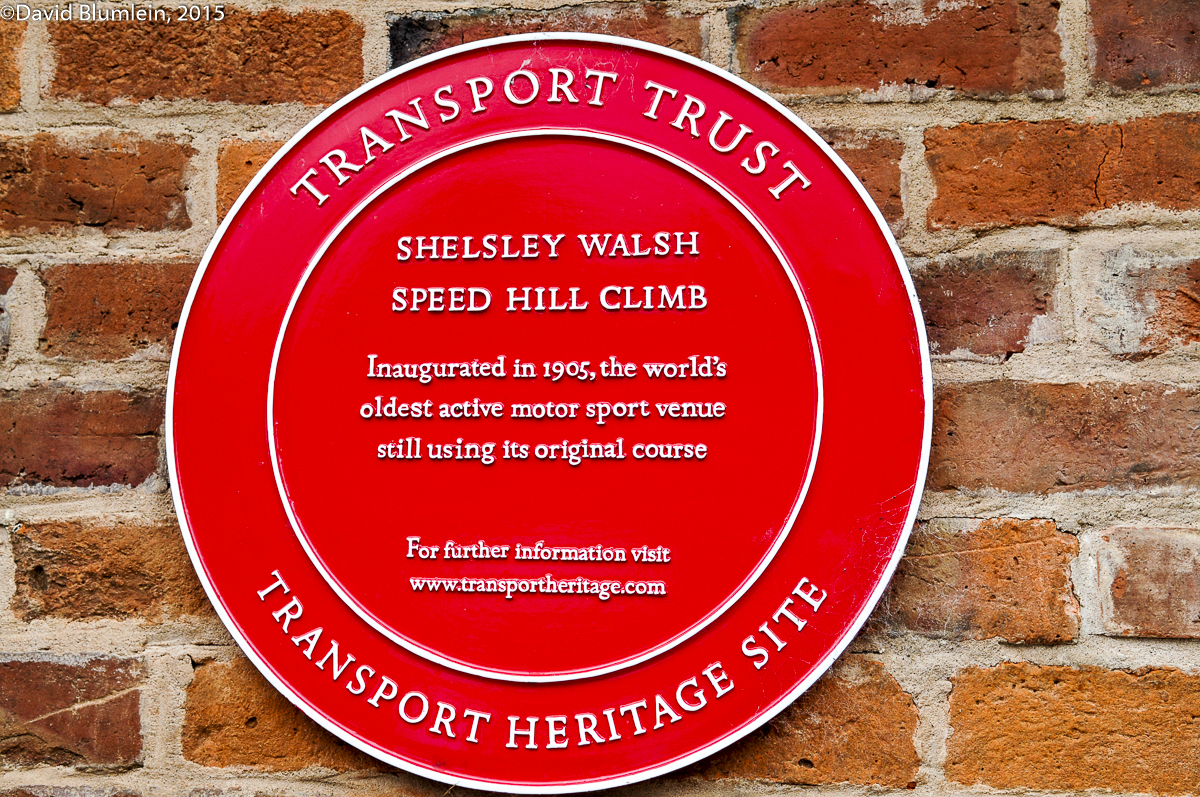 We are enjoying something of a purple patch from The Special Correspondent, last week he travelled to the vintage venue of Shelsley Walsh for something truly special…………….

In the Twenties and Thirties the Shelsley Walsh Hill Climb acquired considerable importance for British motorsport. After the Kop Hill accident in 1925, use of the public roads for competition purposes was completely banned, providing an impetus for Shelsley, which was located on private land. Participants in motor sport in Britain therefore had a choice of only the Worcestershire hill climb or Brooklands until Donington came on the scene in the mid-Thirties and Prescott in 1938. 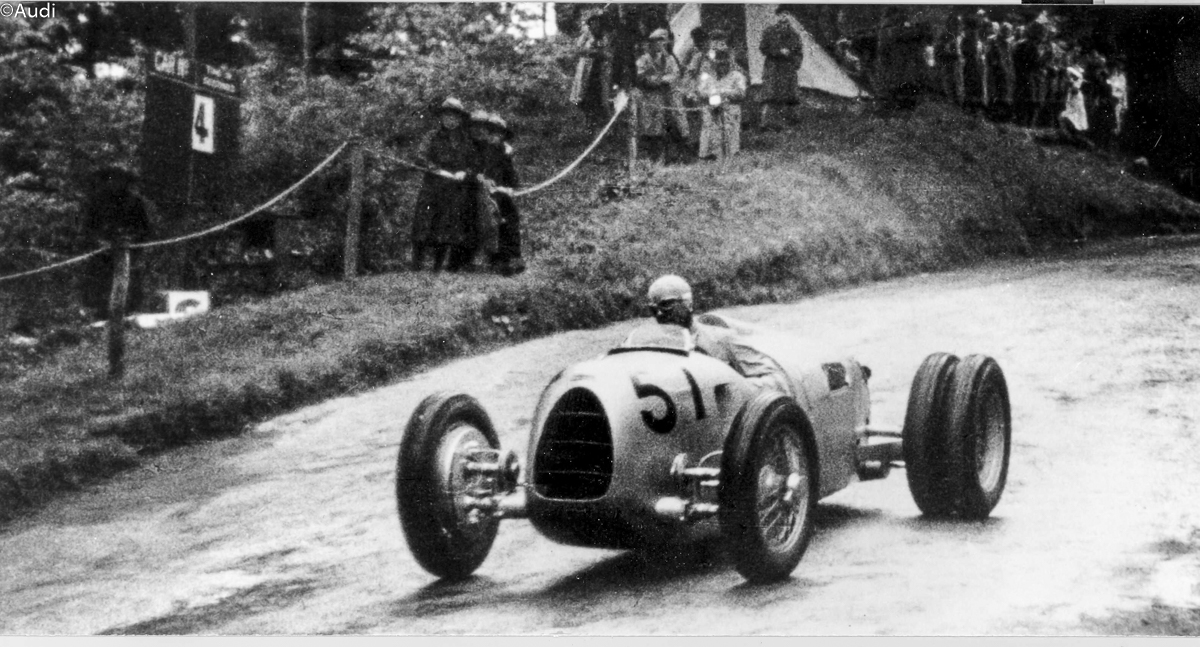 This had the effect of attracting good quality entries and manufacturers were certainly aware of its importance. For example, we find the Riley Motor Company electing to introduce its new “Nine” to the public at the 1926 Shelsley meeting. Prime Minister Stanley Baldwin attended the meeting in 1928 and famous foreign racing drivers like Rudi Caracciola appeared with the big sports Mercedes-Benz. The very rare Spanish Nacional Pescara came hunting European Hill Climb Championship points and Jean Bugatti, Ettore’s son, brought the four-wheel drive Type 53 Bugatti – alas, he crashed it at Kennel Bend. And there was even Count Premoli’s supercharged class-winning Bugatti-Maserati which had been towed all the way from Milan! 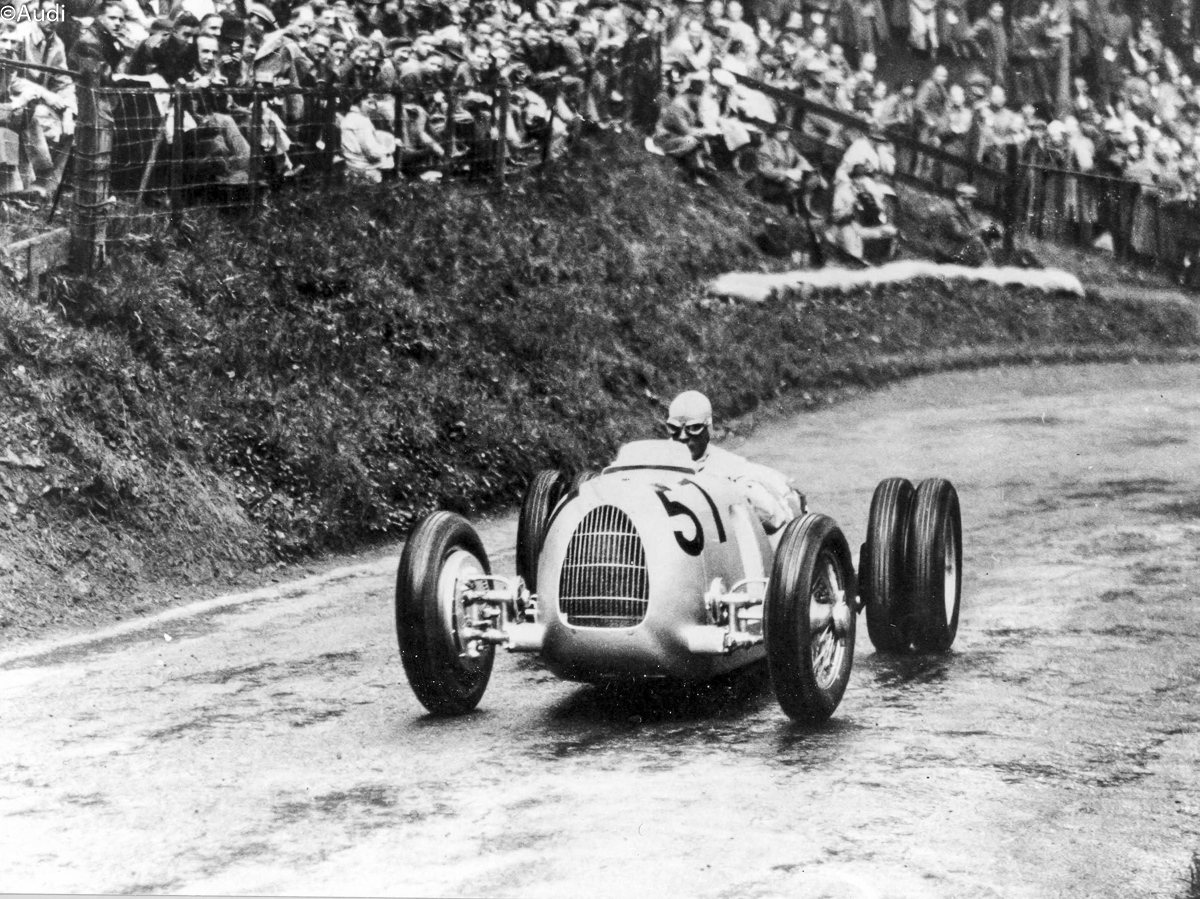 In 1930 the Bergmeister Hans Stuck appeared with the blue and white 3-litre Austro Daimler and set a record time of 42.8 seconds which was not broken for nearly three years. In 1936 he came back with a C-type Auto Union Grand Prix car, with a shortened chassis and twin rear wheels. He was unlucky because it rained when he made his climb and the big German car with over 500 b.h.p. was too much of a handful in the conditions to set a new record – “too many horsepowers” – he proclaimed. 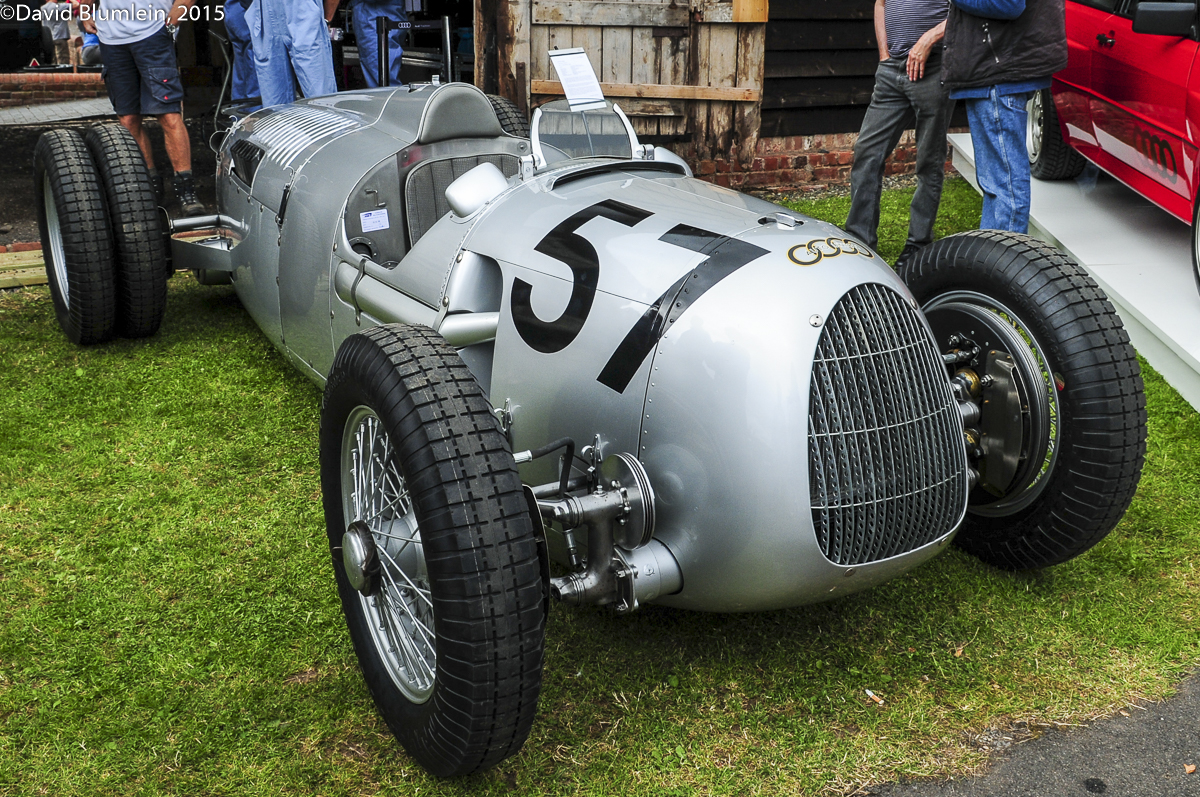 The 80th anniversary of this appearance formed the highlight of this July meeting. The Audi factory had previously commissioned the totally faithful construction by Crosthwaite and Gardiner of a C-type Auto Union which Audi uses for demonstration purposes. The son of Hans Stuck, the well-known current driver Hans-Joachim Stuck, was dispatched complete with this car to Shelsley to give four demonstrations, two on Saturday and two on Sunday.
Here is the car in the paddock, where everyone can go: 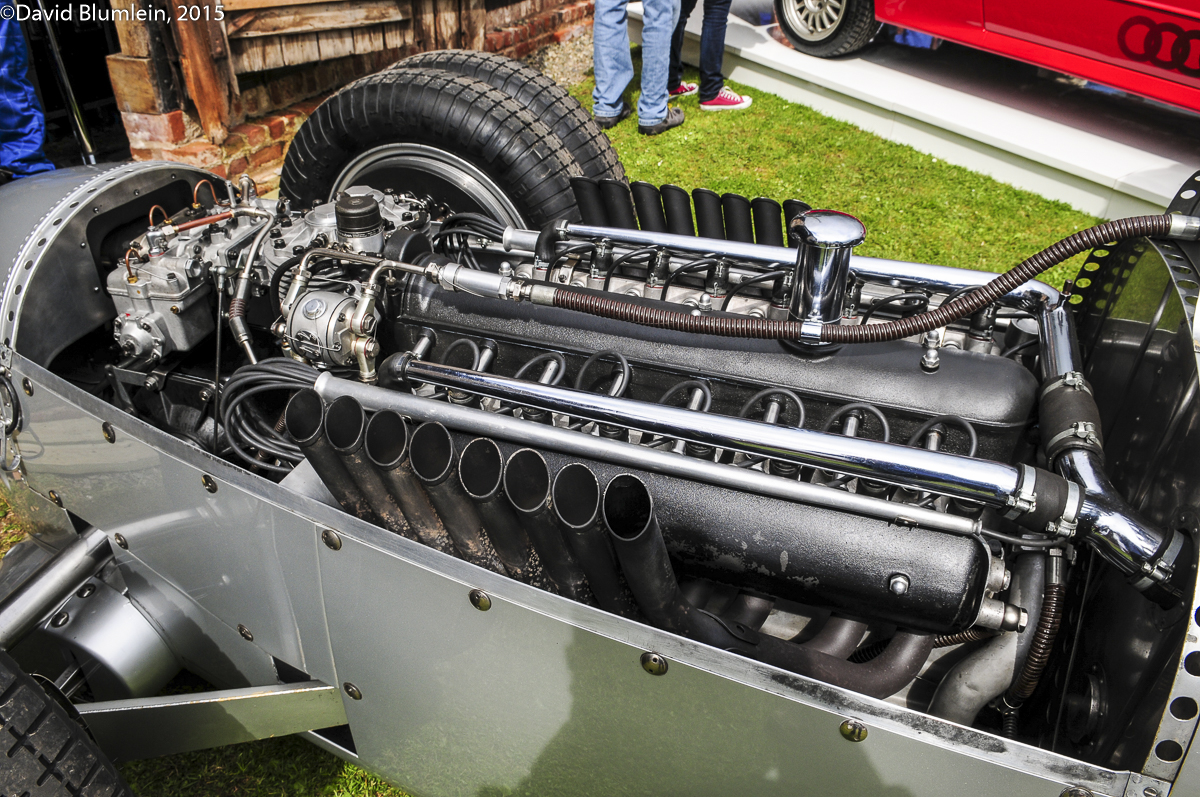 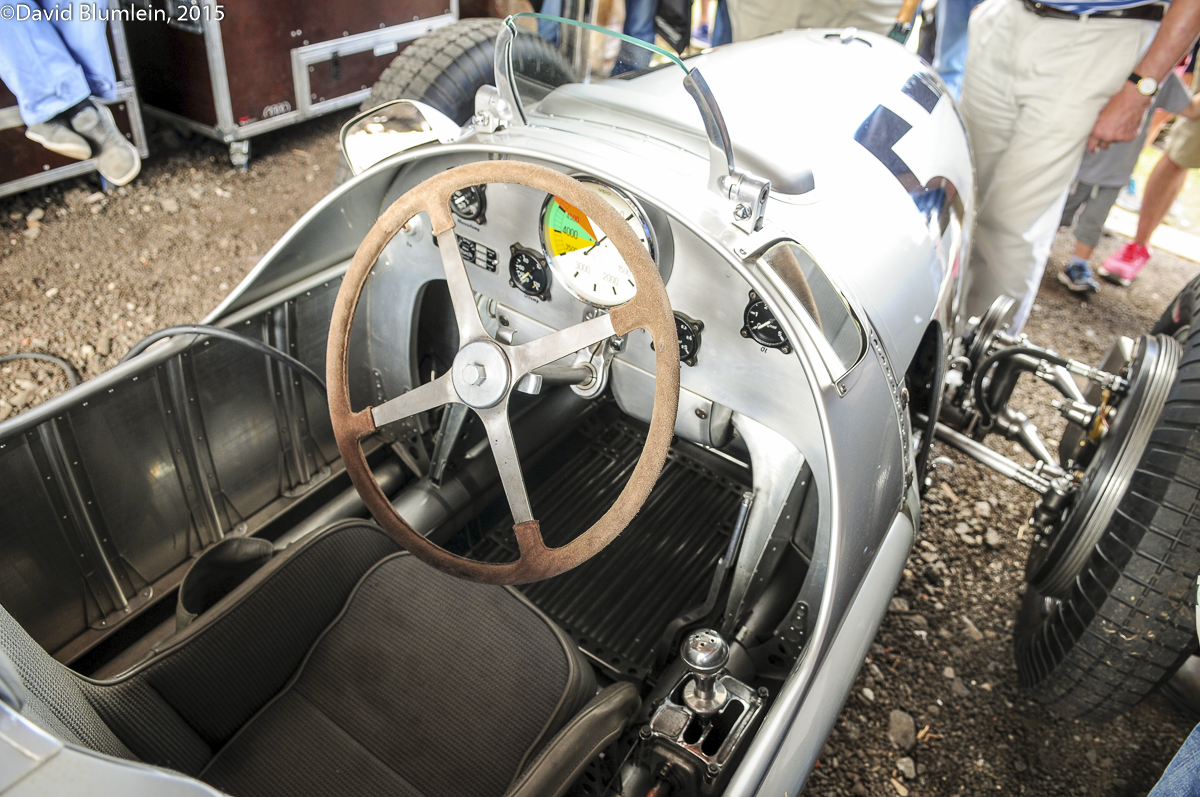 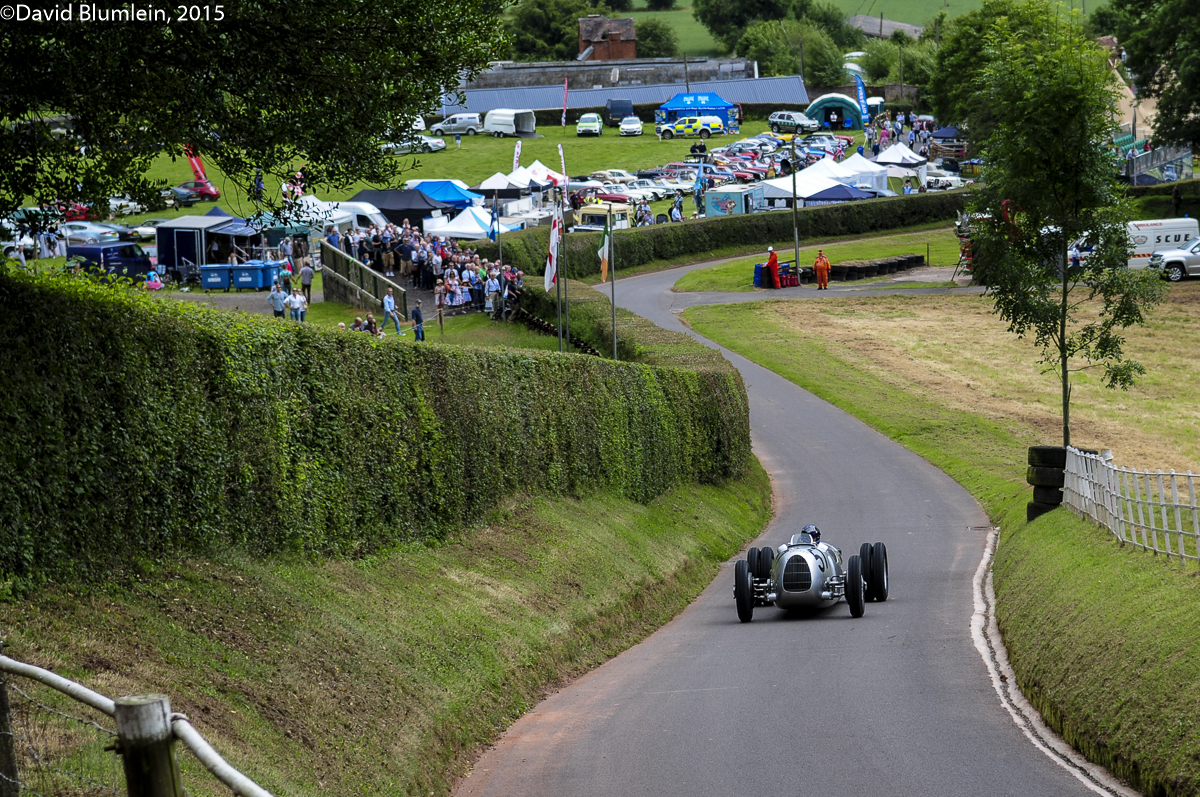 Now we see Stuck letting the car loose on the hill, first approaching the Crossing with the Kennel Bend in the background, 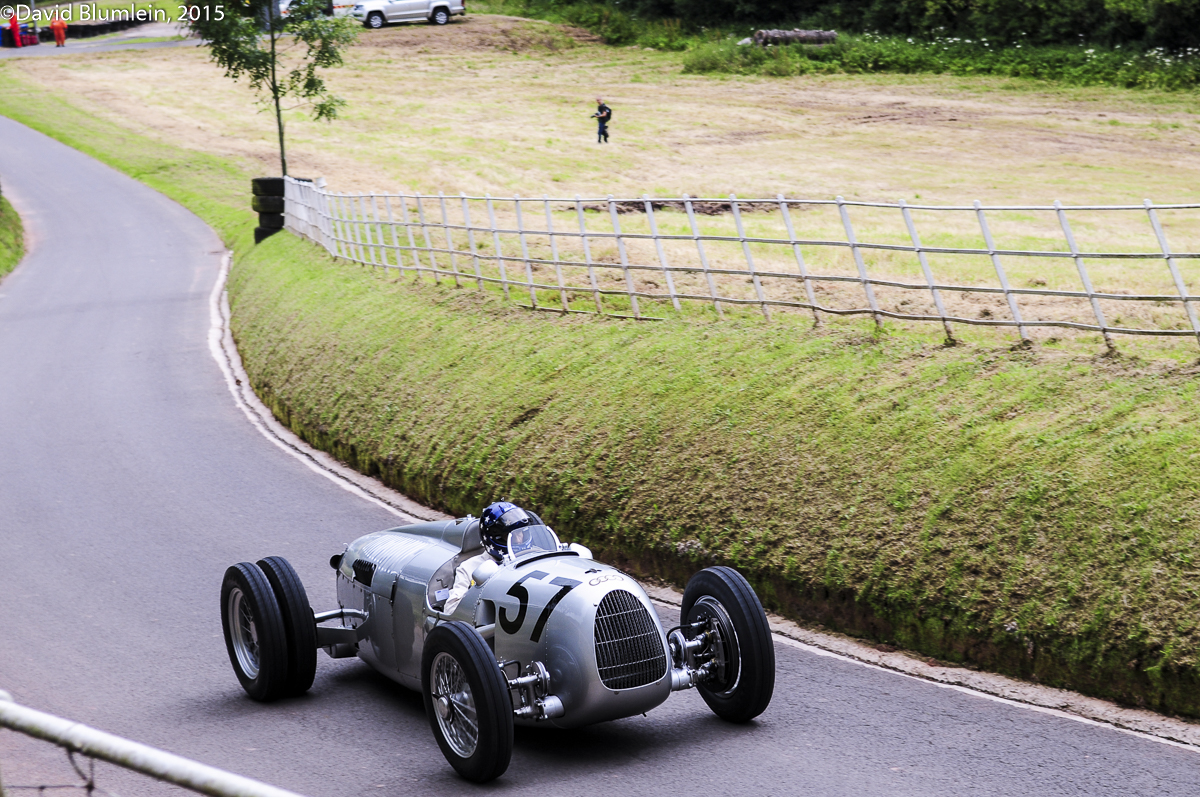 then in the Crossing 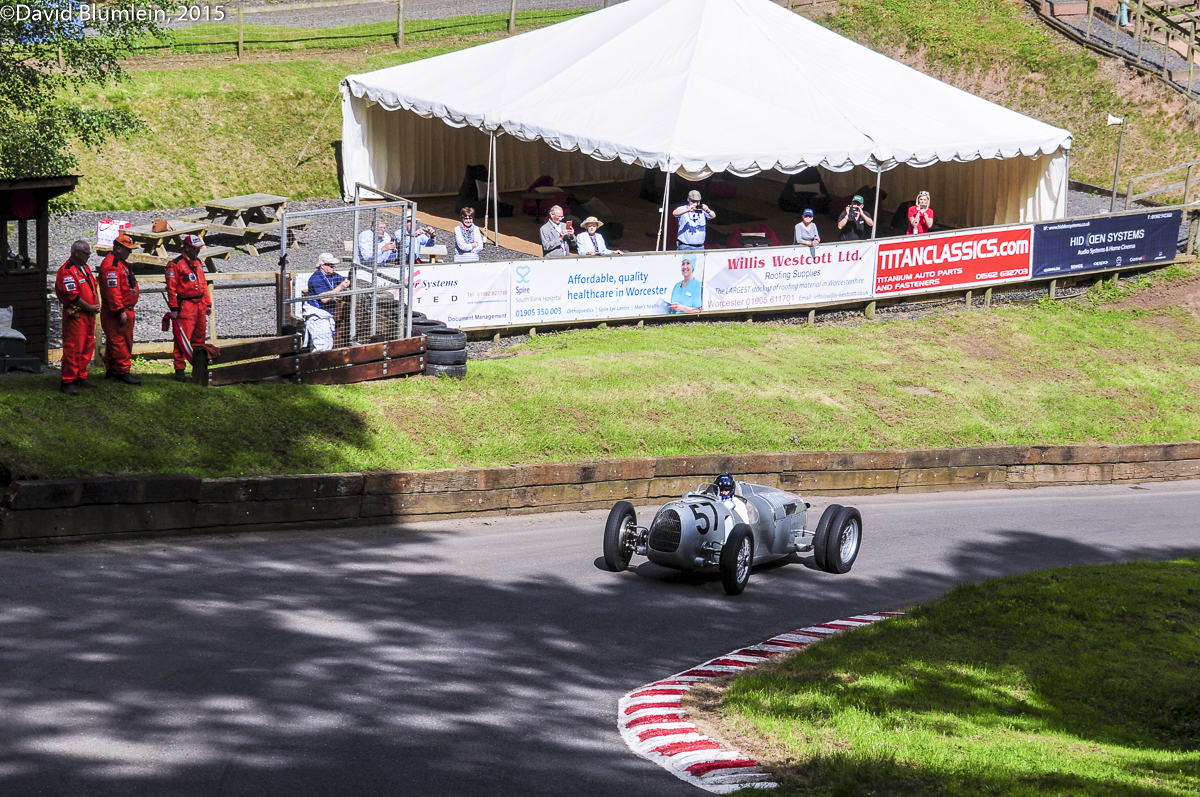 and further up the hill turning into the Bottom S: 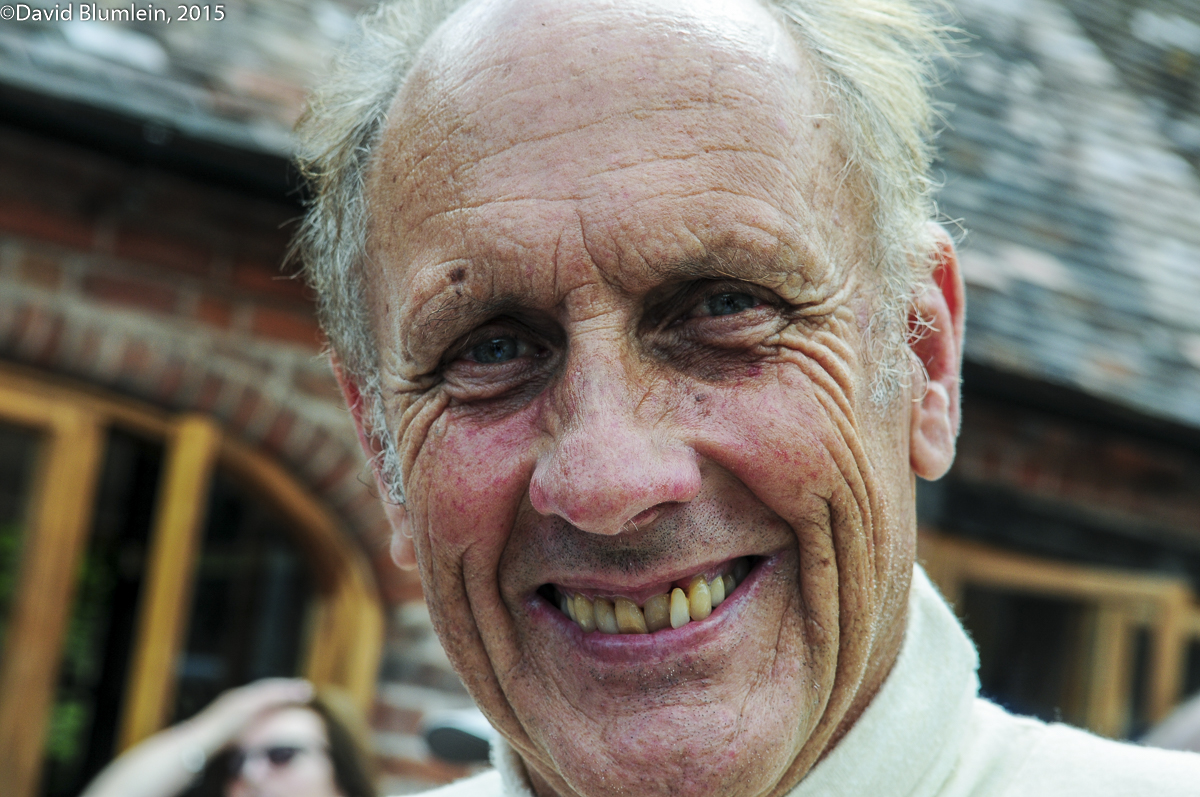 During the lunch break Stuck gave a public interview in the Courtyard after which he freely chatted with the race-goers; isn’t he like his famous father? 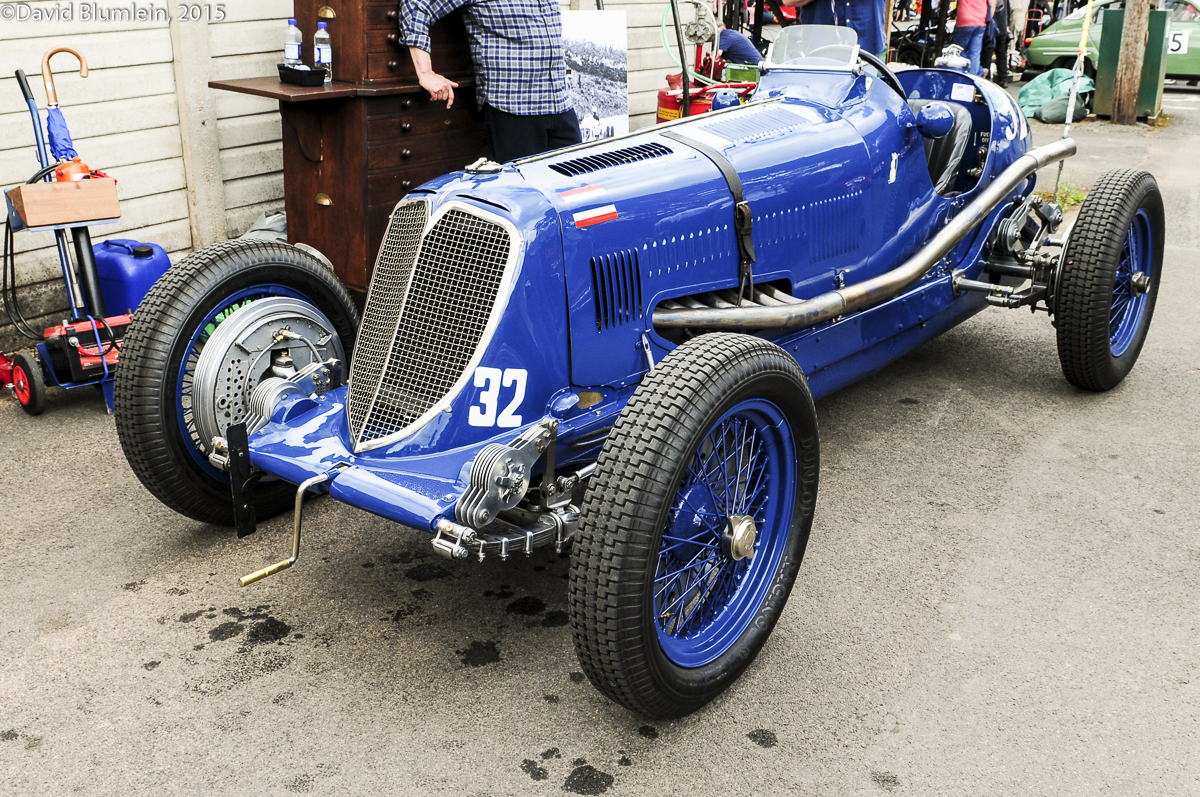 There was further nostalgia to be experienced – this is the Whitney Straight Maserati 8CM which went on to lower the record after Stuck (senior) had set it in the Austro Daimler: 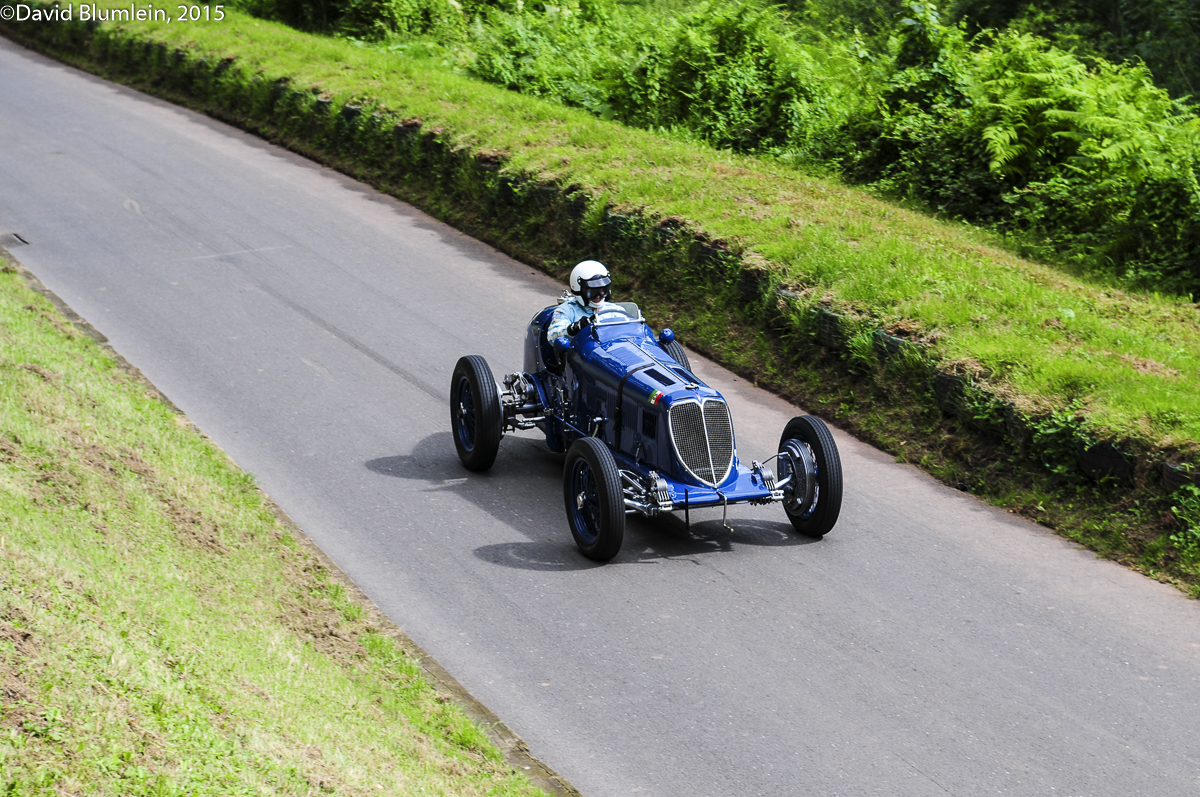 And here it is approaching at very high velocity the two S-Bends: 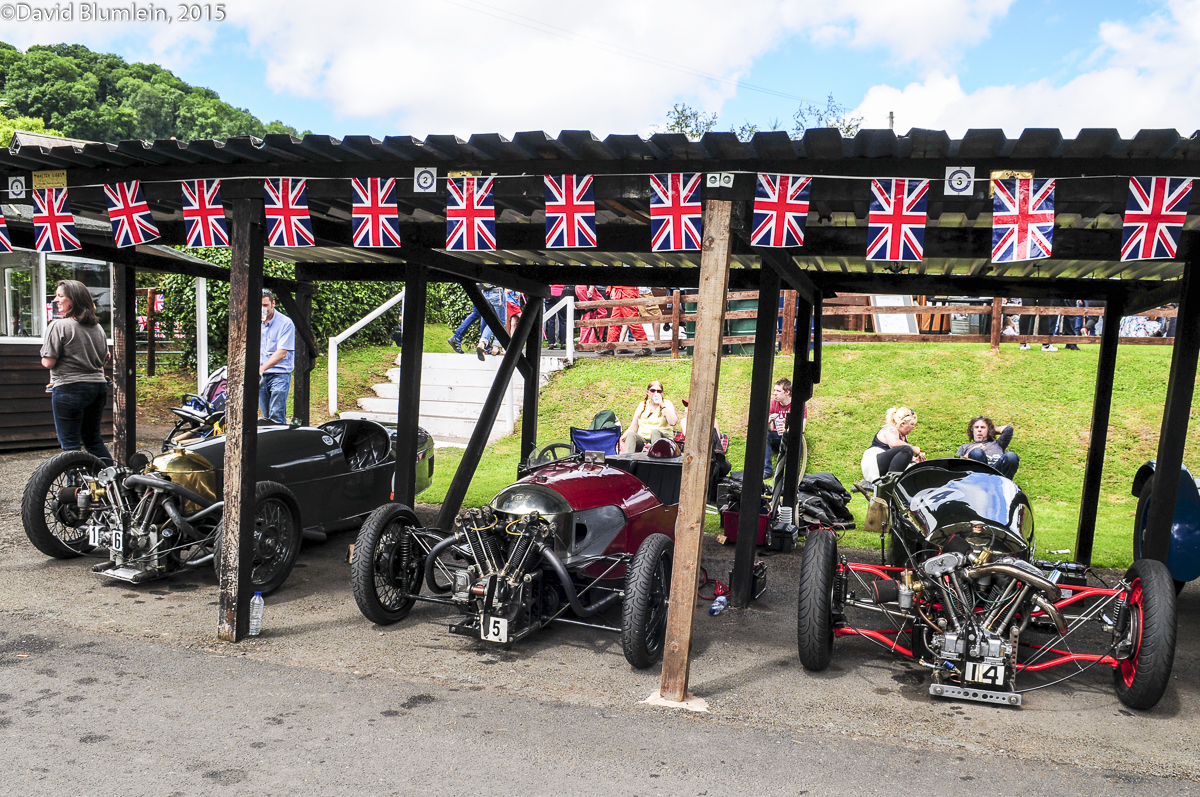 There were, of course, masses of other cars taking part, including these potent three-wheeler Morgans, lined up in their sheds in the paddock: 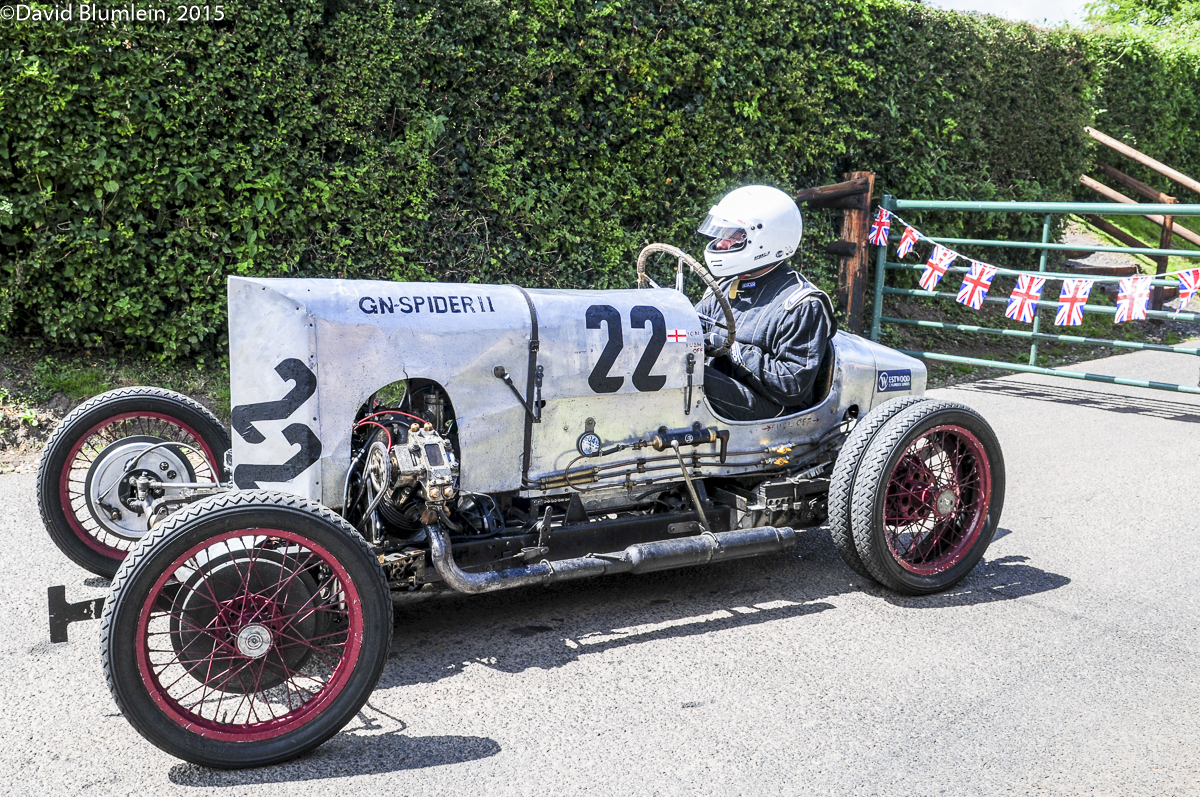 and the famous Shelsley Special Spider 11: 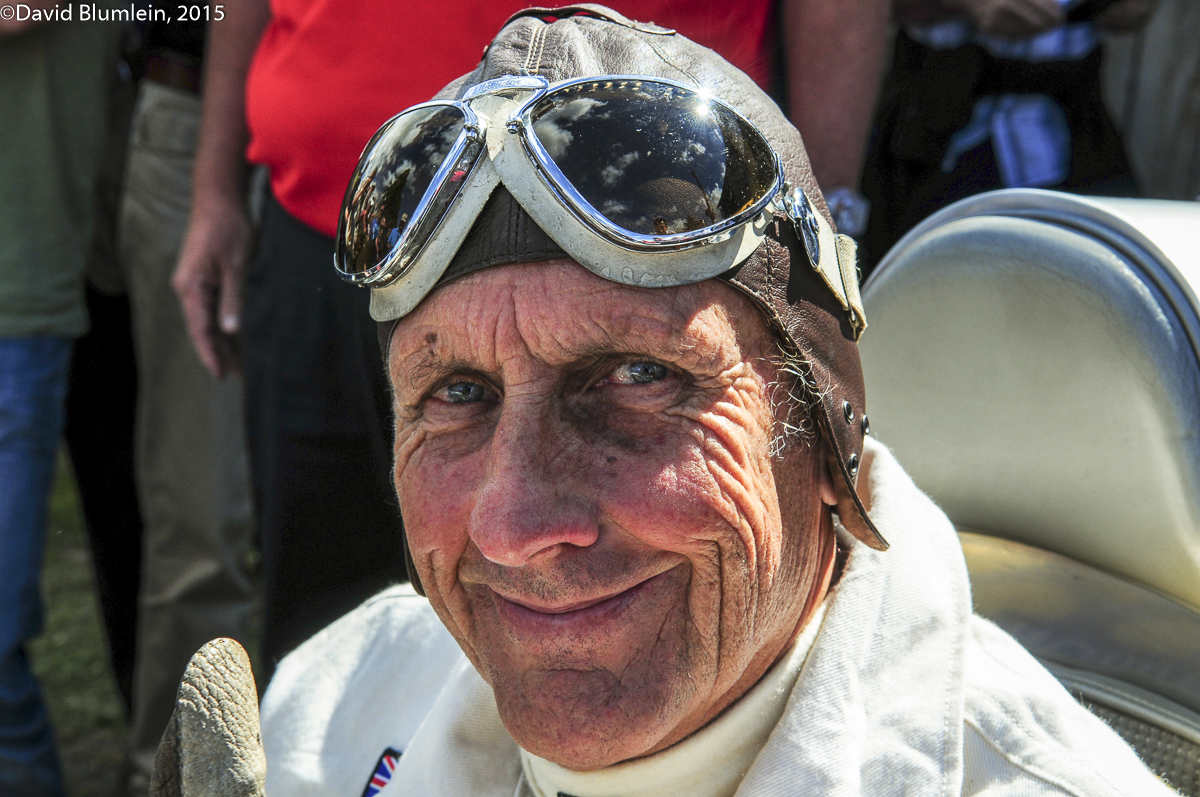 On the Sunday afternoon Stuck gave his last demonstration of the Auto Union, this time wearing the cloth helmet and goggles used by his father in the pre-war days: 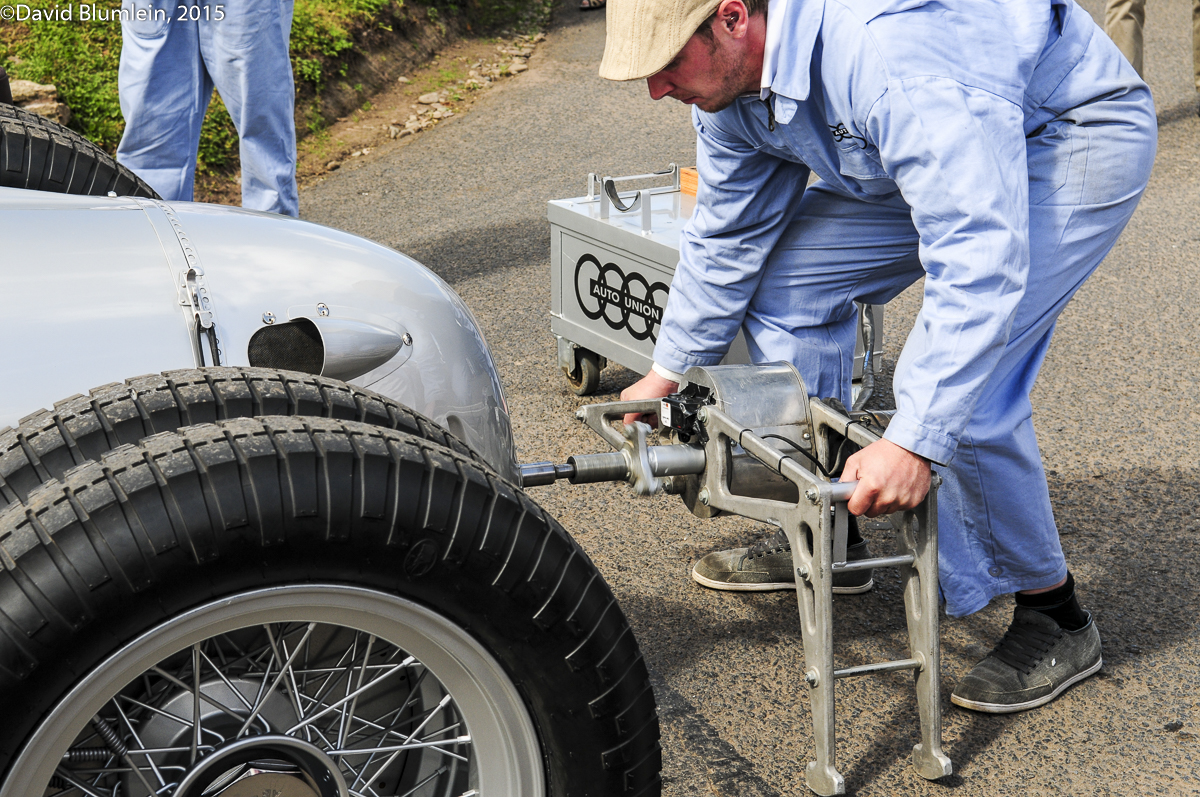 It was intriguing to watch the mechanics inserting the electric starter in the shaft at the rear to bring the raucous V 16 to life; 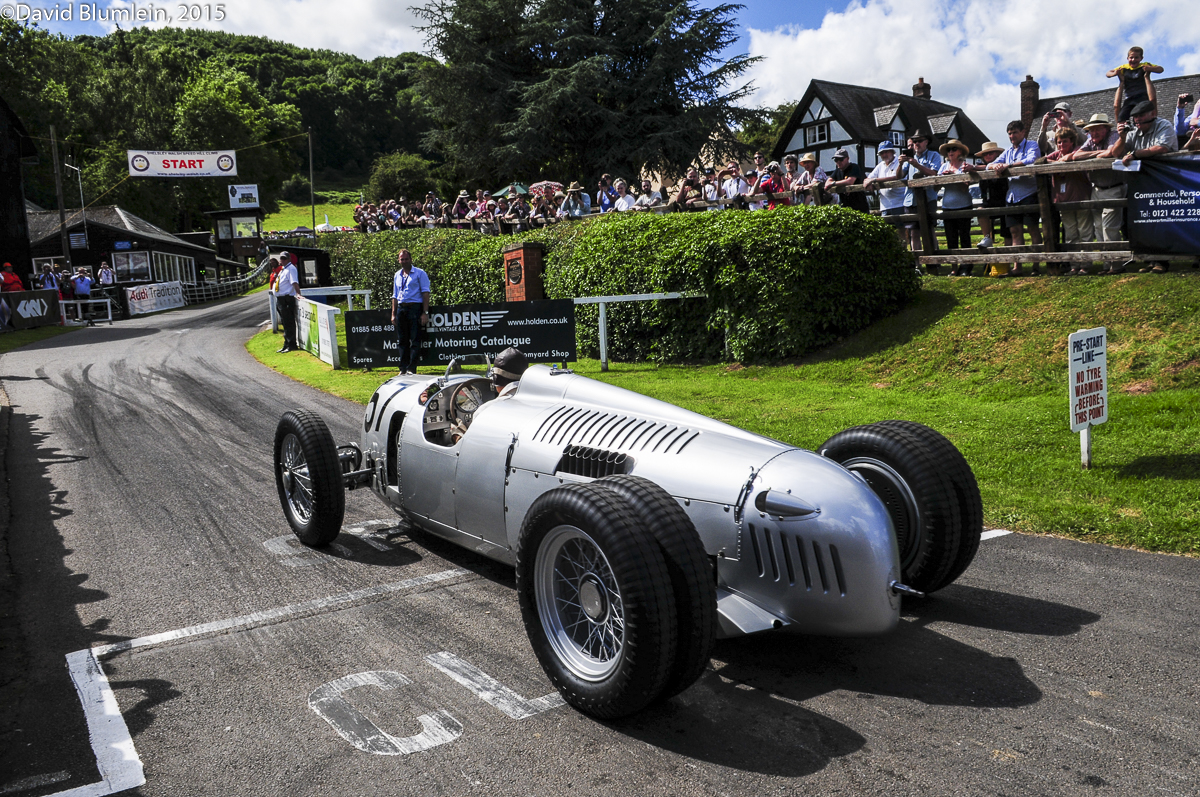 as Stuck sets off up the famous hill: 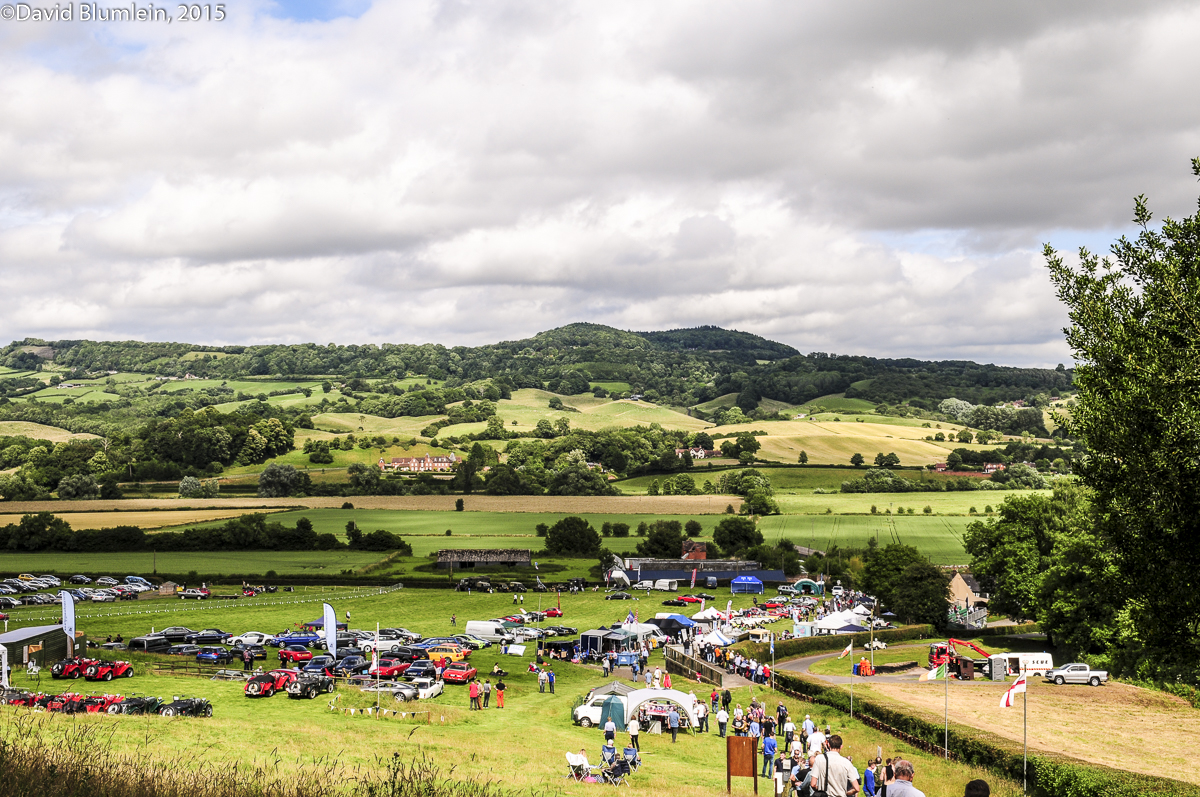 The beautiful setting of Shelsley Walsh in the valley of the River Teme in rural Worcestershire. The paddock and main buildings are behind the trees on the right.

1 thought on “Get Stuck In”