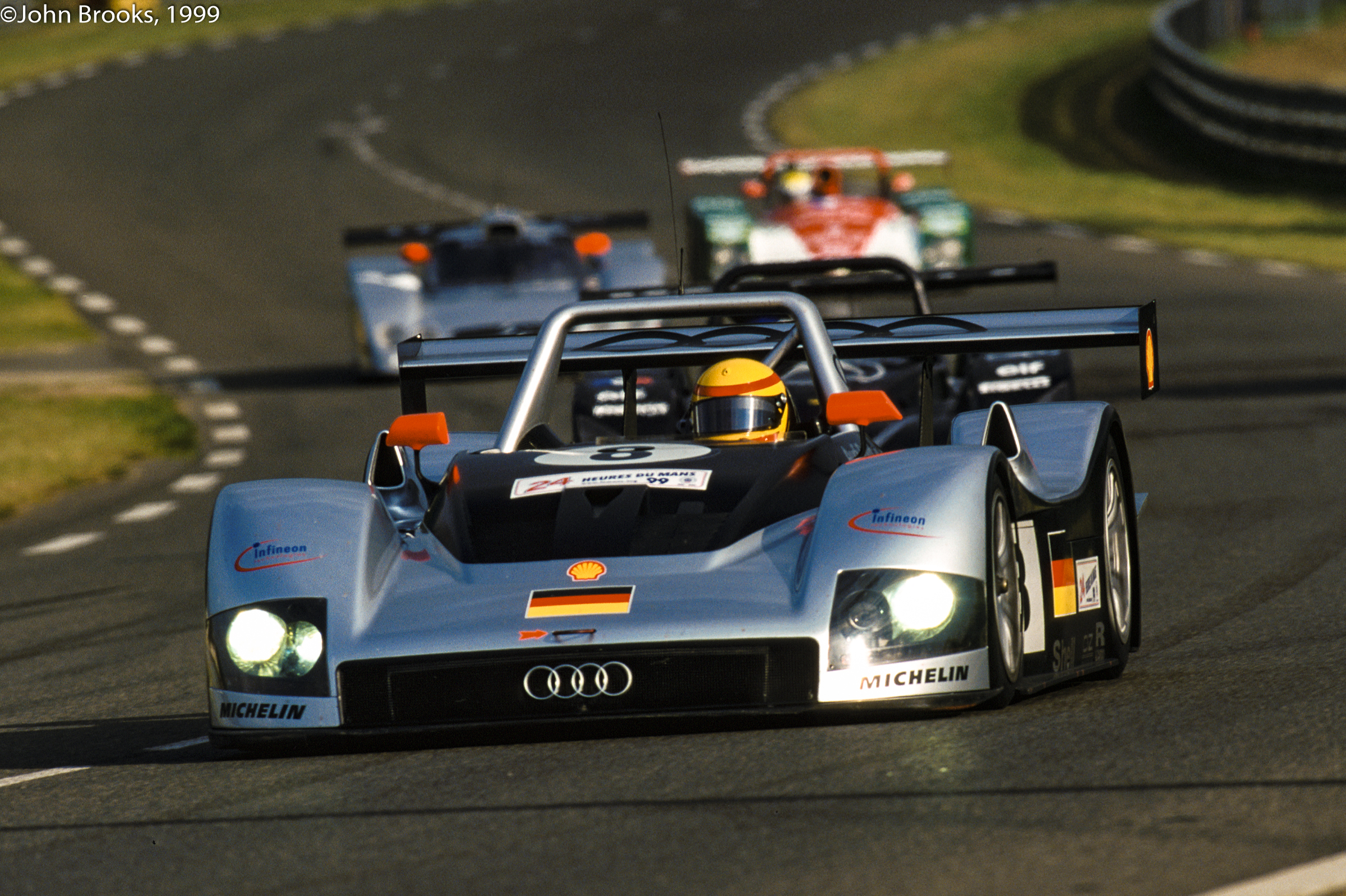 “Audi to quit Le Mans and Sportscar Racing at the end of the 2016 season” was the headline that shocked the racing community when the news broken last month by Sport Auto’s Chief Editor, Marcus Schurig, in Germany. The impact will be felt far and wide as many in the business have depended on the huge budgets committed by the German giant, either directly or indirectly, not to mention the Départment of La Sarthe. The story of the 18 seasons at the top of the endurance racing tree will come to fill the history books but perhaps now it is time to have a brief look at the racer that created the Le Mans legend, the Audi R8. But first we should examine at how this journey started. 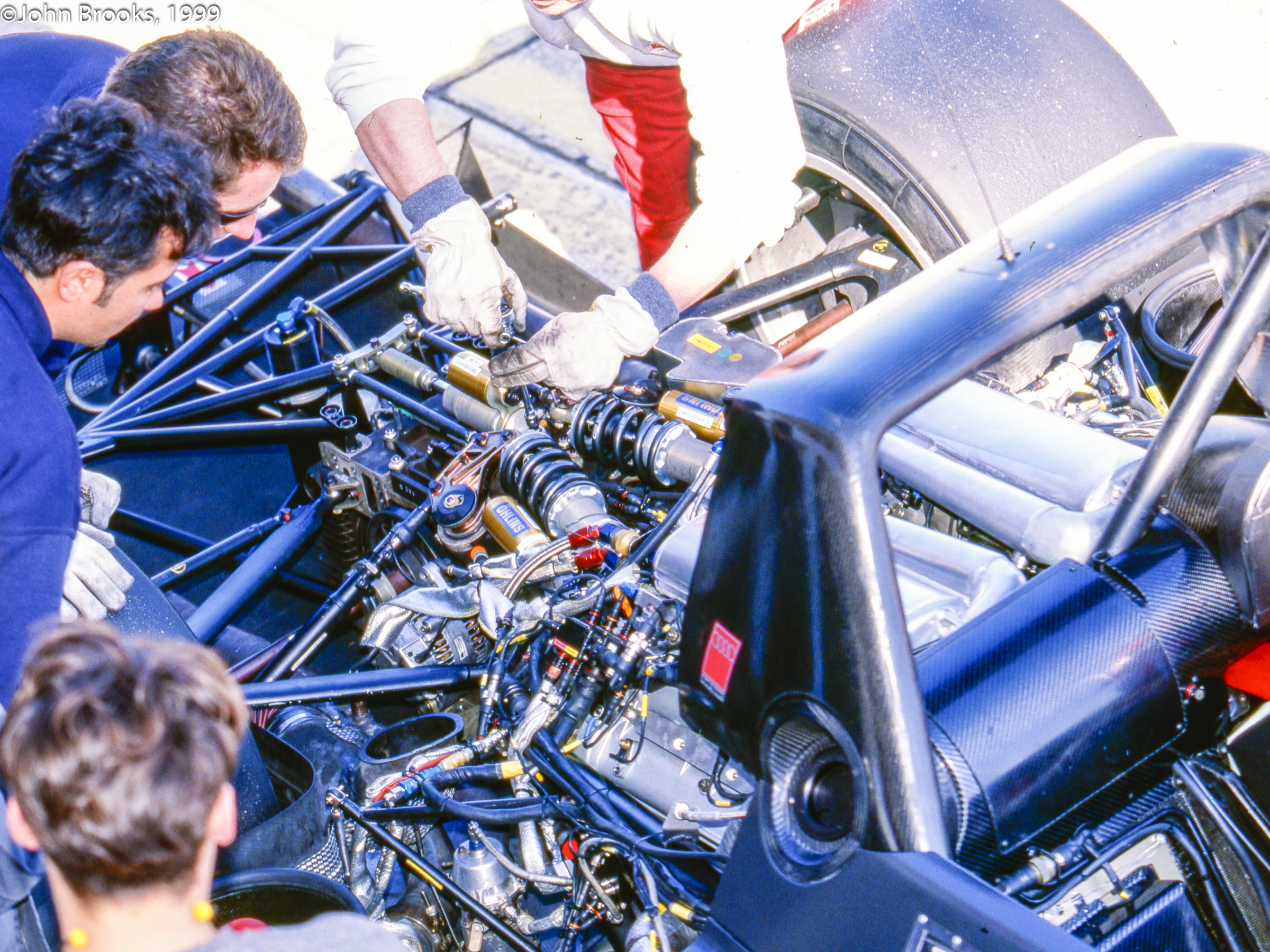 Like all epic tales there was a prologue. Audi arrived at Le Mans in 1999 with not one, but two diﬀerent race cars, one open, one closed, the rules of the time allowed for radically diﬀerent solutions. The Audi R8R’s chassis was designed by Dallara and built by ATR, while Fondmetal assisted the German factory with the aerodynamics. 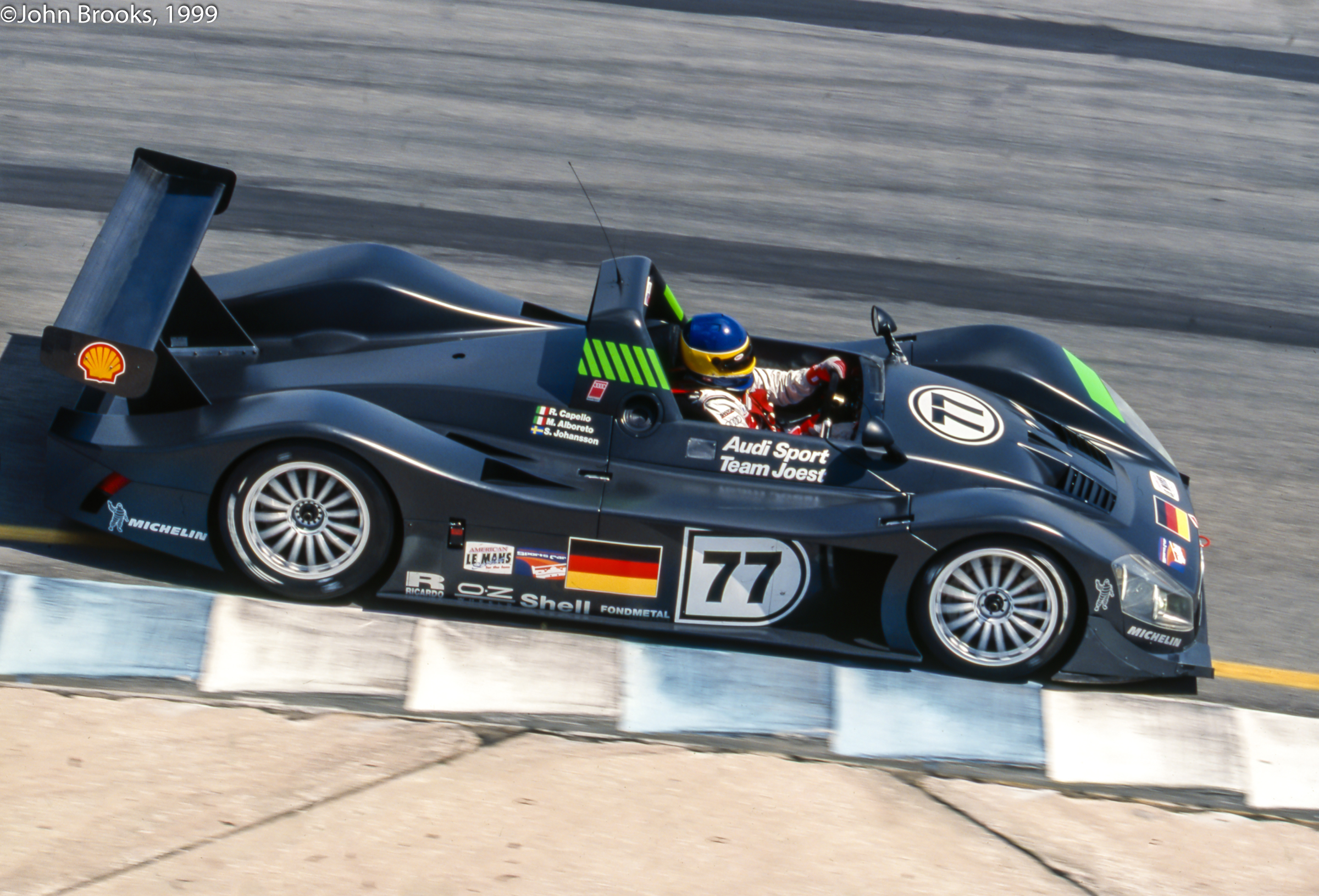 The R8R made its debut in March 1999 at the 12 Hours of Sebring. Two of the open prototypes were entered with the operation run by Joest Racing, four time winners at Le Mans, 84-85 with a Porsche 956 and 96-97 with the Joest Porsche. 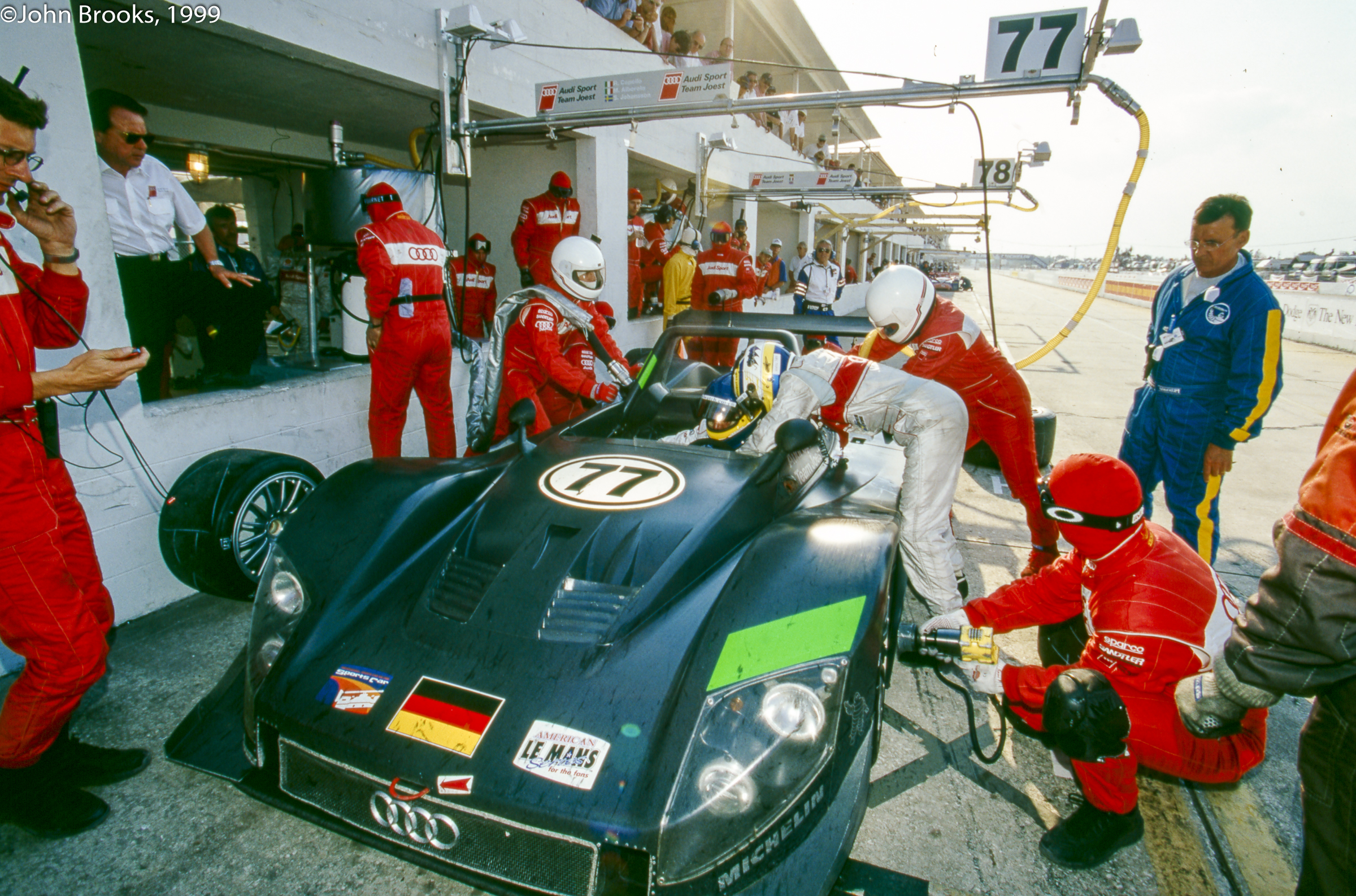 #77 had former Ferrari Grand Prix stars , Michele Alboreto and Stefan Johansson on driving duties. This pair of former winners at Le Mans were joined in Florida by Dindo Capello, a multiple Italian Touring Car Champion with both VW and Audi. 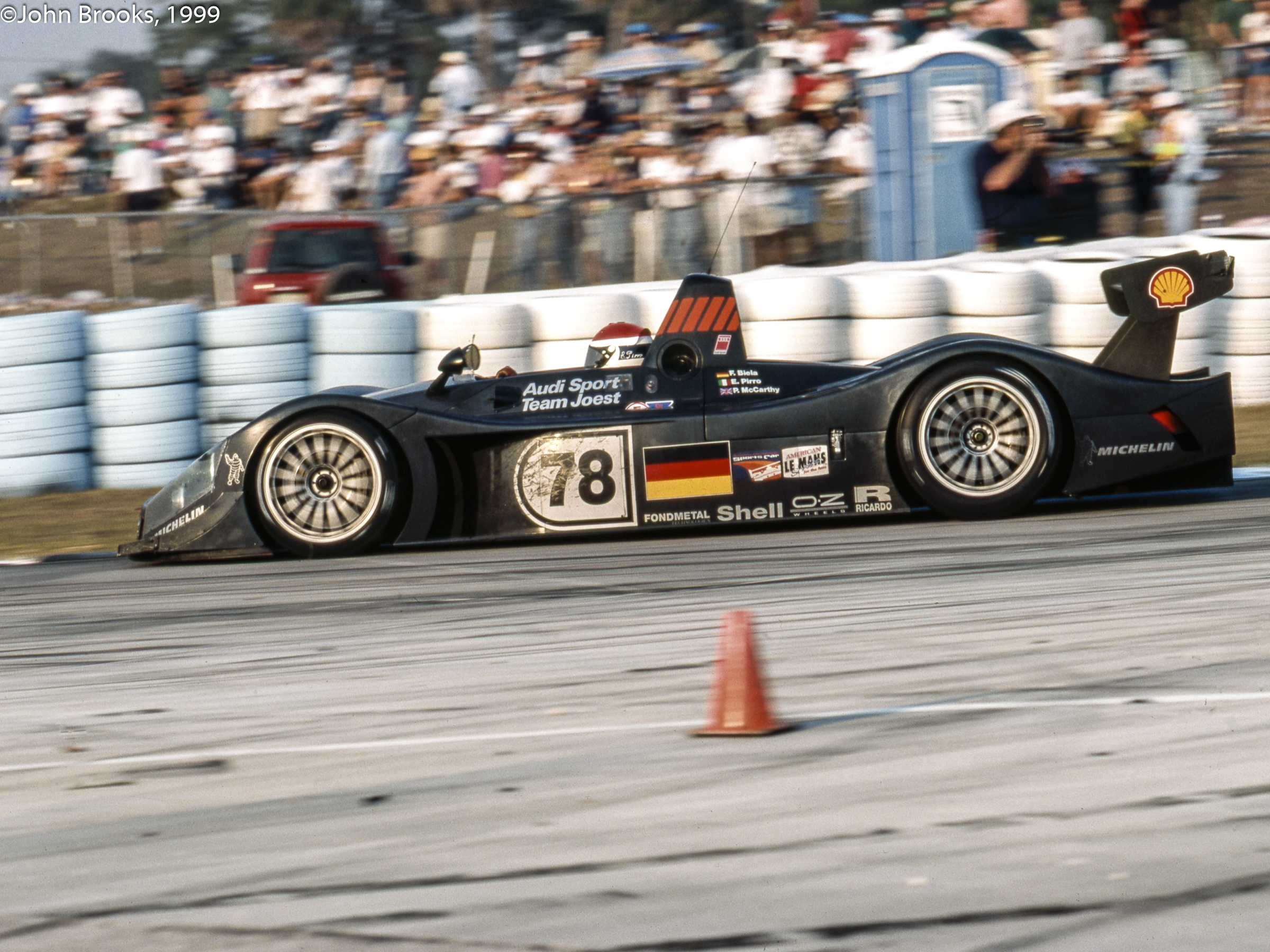 #78 had Frank Biela, Emanuele Pirro and Perry McCarthy in the driver’s seat. Pirro and McCarthy were both ex-Formula One men and Biela, another long time champion driver for Audi in DTM and BTCC. 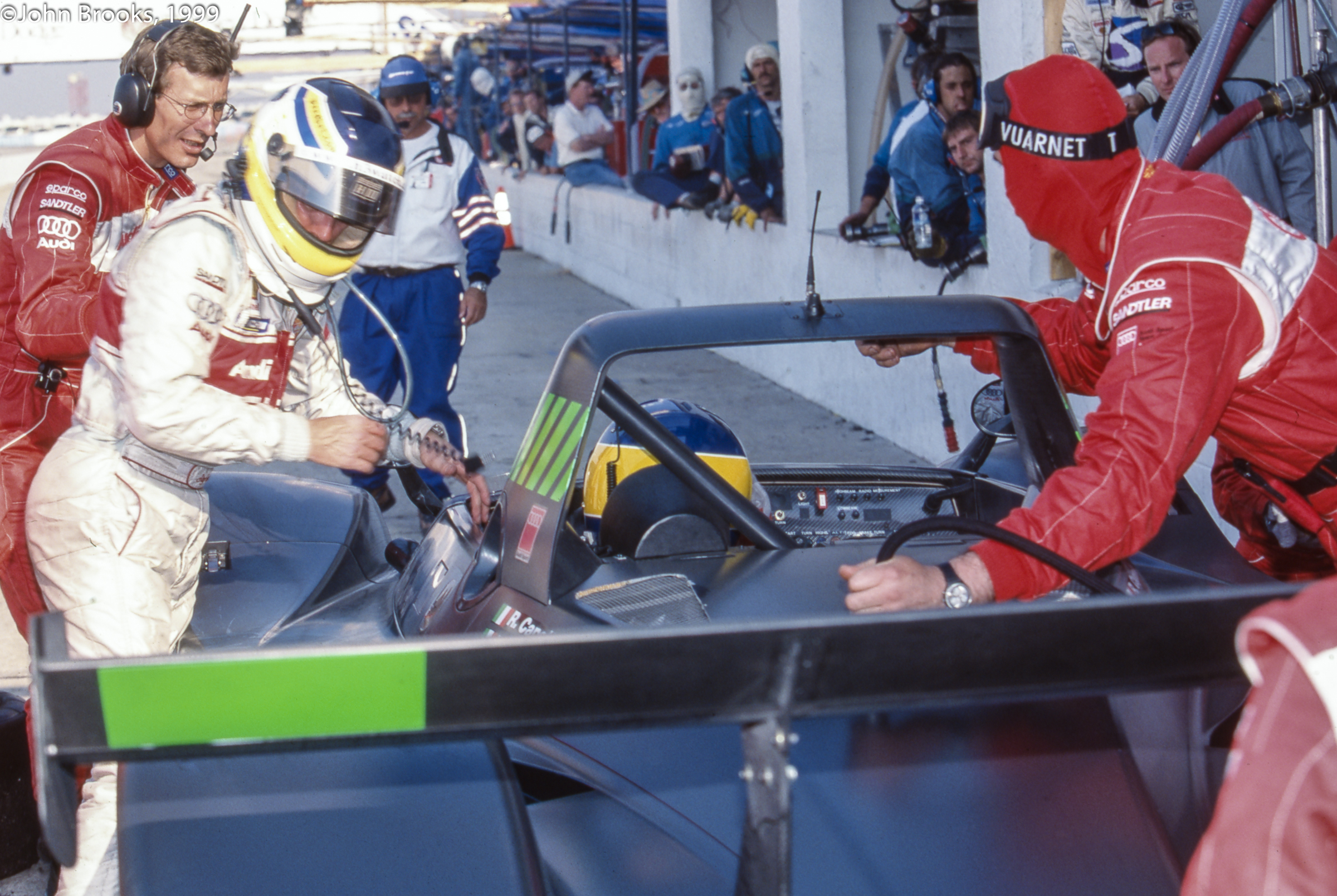 The 12 Hours of Sebring is widely regarded as the toughest of all endurance sportscar events and Audi found out the hard way, making all manner of adjustments to the car that had not been necessary in pre-season testing. 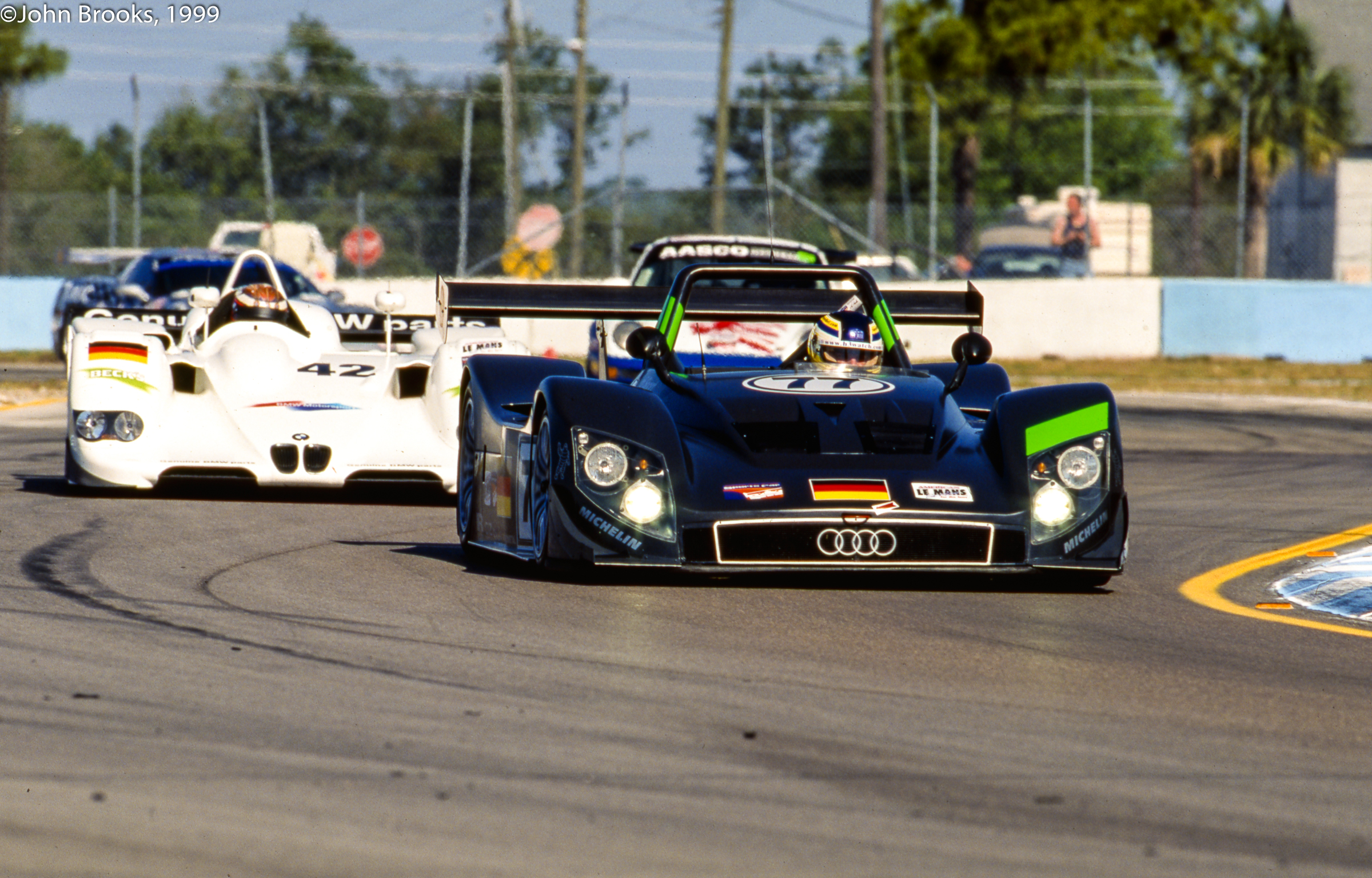 Sebring International Raceway is notoriously rough on cars, this caused the R8R problems. Dr. Wolfgang Ullrich, head of Audi Sport, explained the issues. “It’s so bumpy here that we’ve had to raise the ride height of the car by 15mm. Otherwise we destroy the front splitters every 12-15 laps. We’ve never tried the car this high before.” 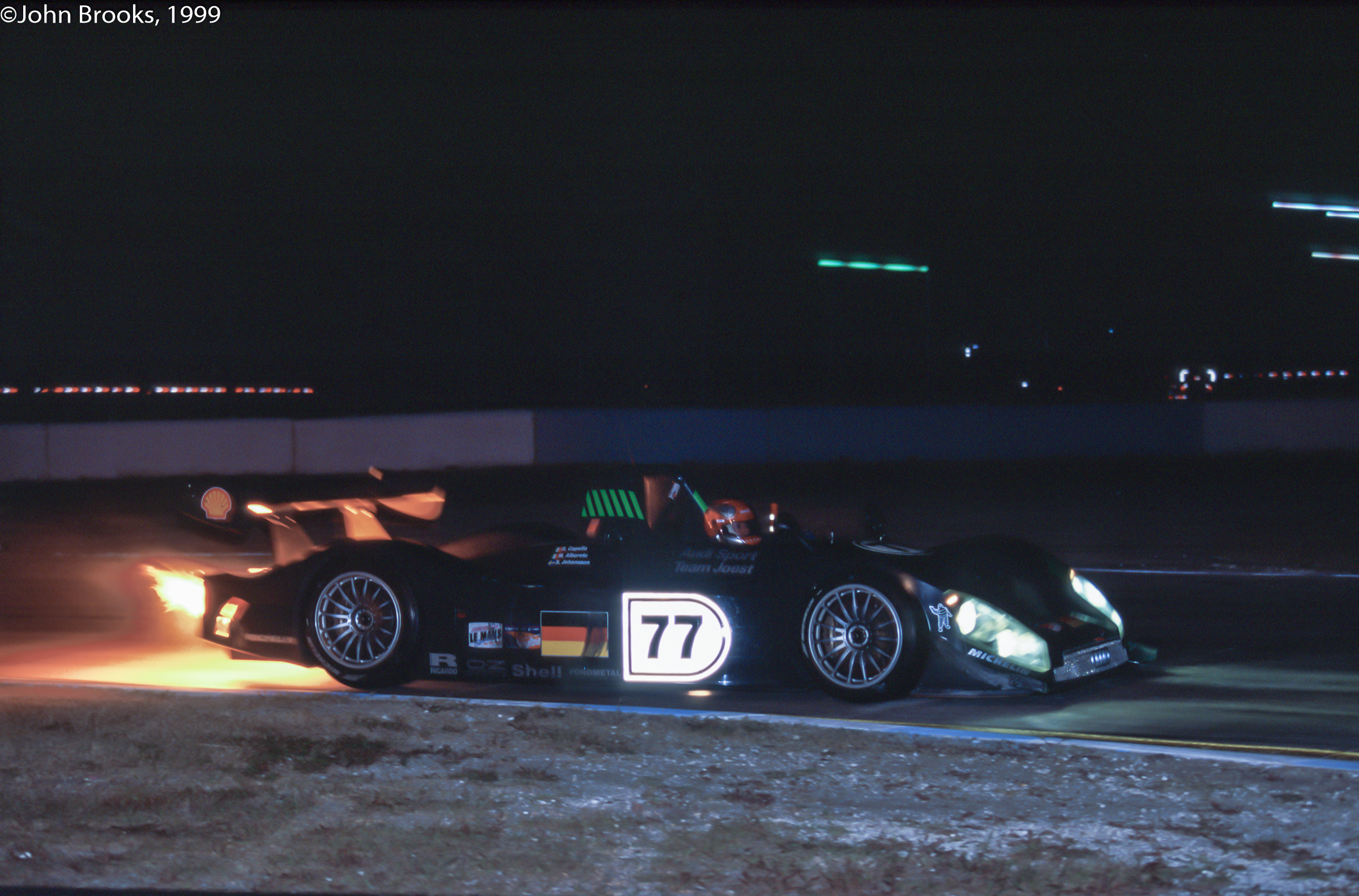 Audi struggled in Qualifying managing only 11th and 12th places, over 4 seconds down on the pole setting BMW. The ride height caused handling issues that could not be fixed at the track, it was going to be a long race. 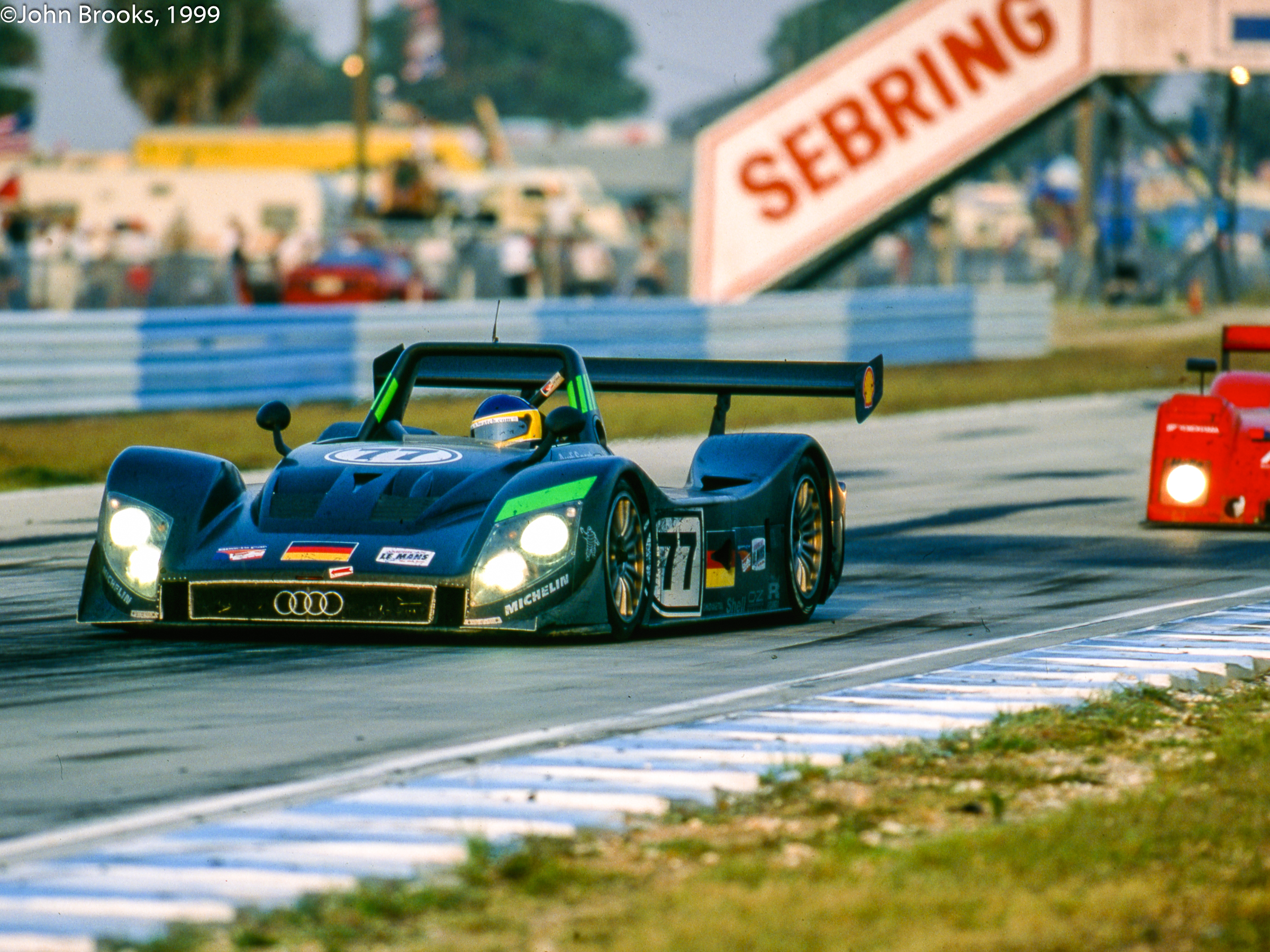 Race day was kinder to Audi who got both cars to the finish, in third and fifth places, as others failed. A podium for Alboreto, Johansson and Capello, albeit 3 laps down on the winning BMW, would be the first of many for Audi in North America, it was a solid start to the project. 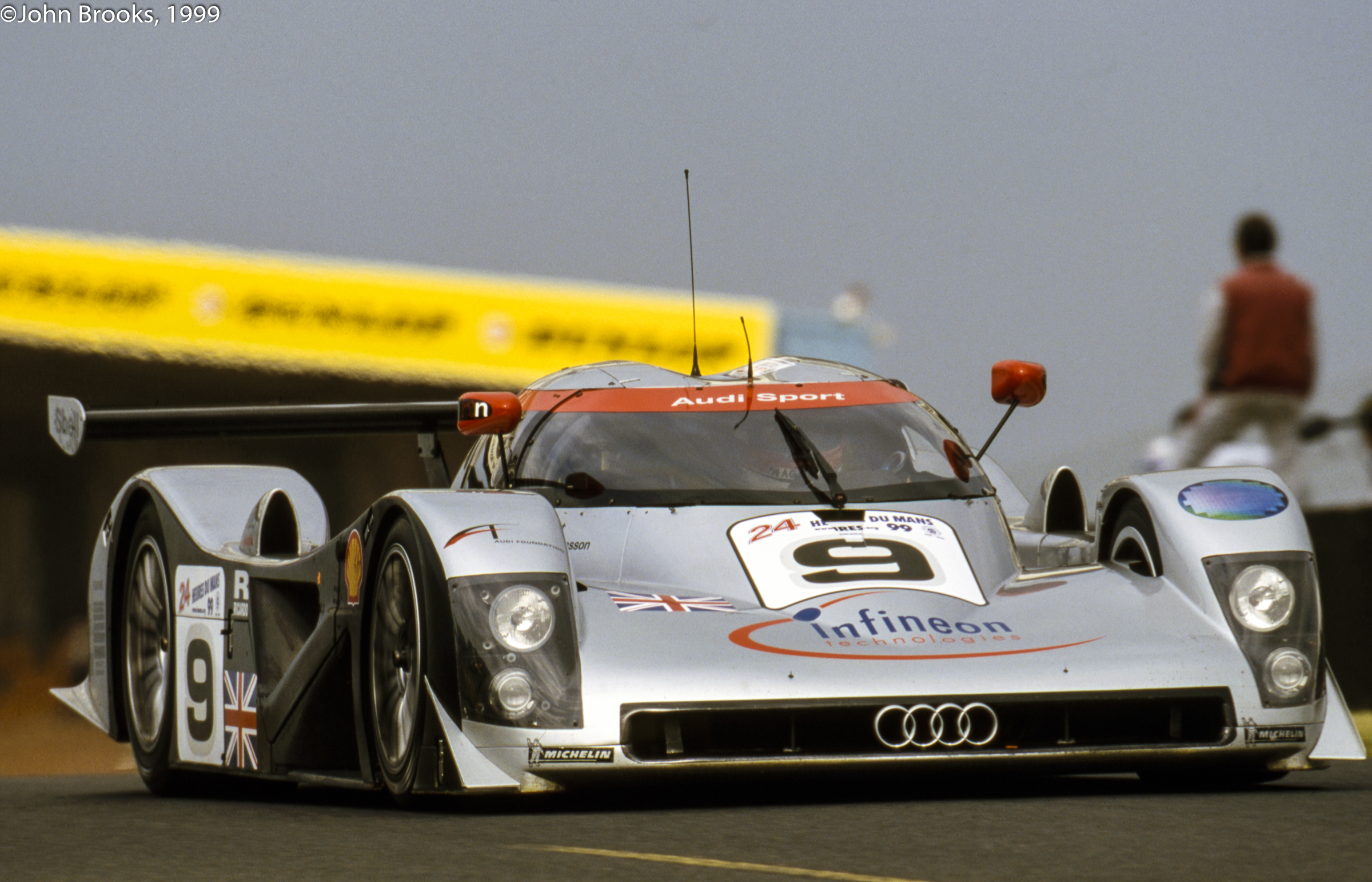 The next appearance for Audi was in early May in Pre-Qualifying for the Le Mans 24 Hours. 53 cars chased the 46 spots on the grid, those who could not beat the clock would be eliminated, unthinkable for a factory-backed team. The sleek Audi R8C pair made their first competitive appearance. Designed by Tony Southgate, engineered by Peter Elleray and sharing the same engine (3.6 litre V8 with twin turbos) and rear drive train as the R8R. The handsome coupé was seriously underdeveloped having been commissioned too late (the project only started in the previous September) with the second car only just completed before Pre-Qualifying. The driver line up was certainly experienced with #9 crewed by former winners, Stefan Johansson and Stéphane Ortelli who were supported by Christian Abt, a late call up after Yvan Muller withdrew from the Audi squad. #10 was an all English affair with James Weaver and 1988 winner Andy Wallace sharing the wheel with Perry McCarthy, the original Top Gear ‘Stig’. 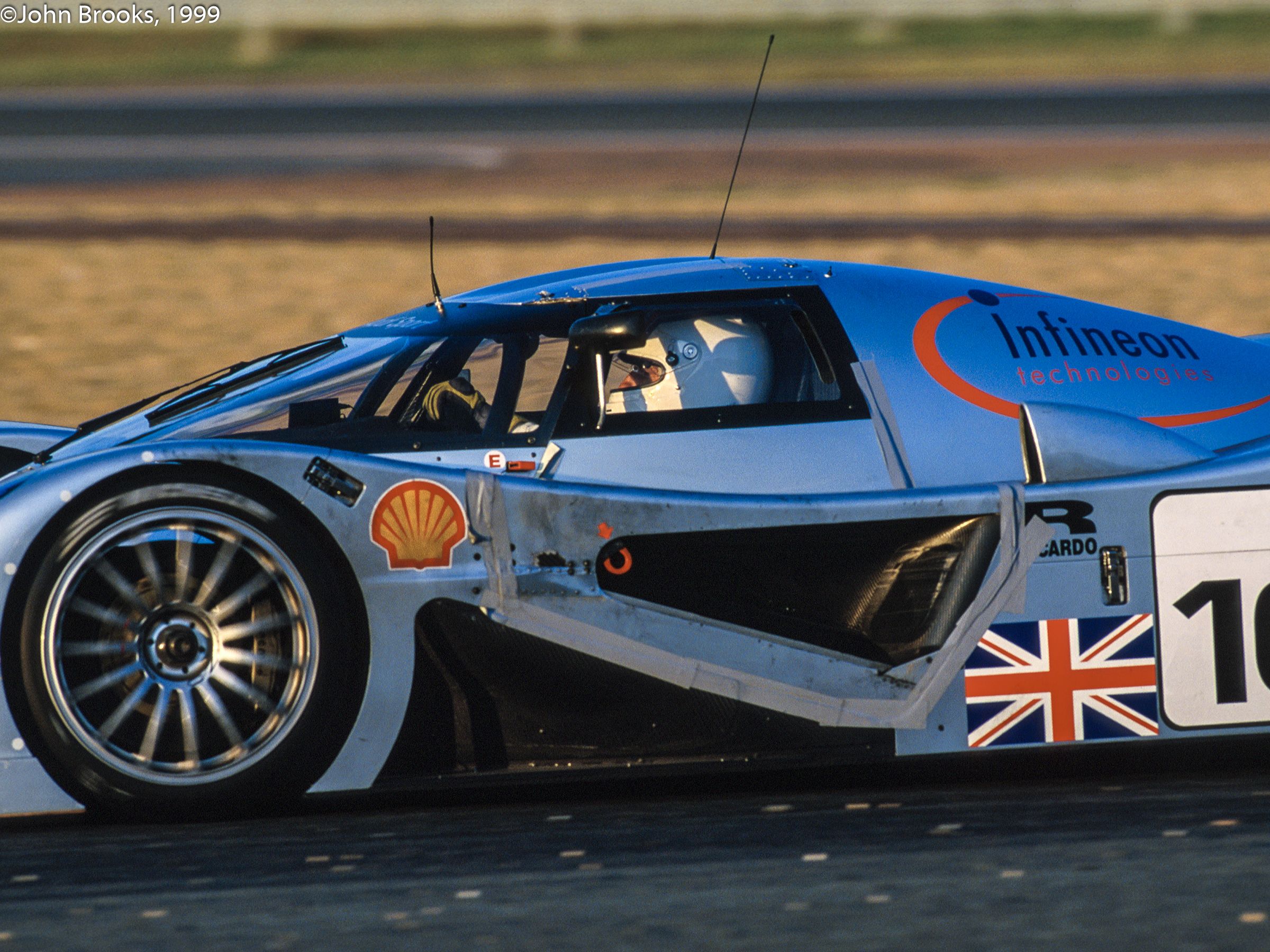 The R8R pair qualified for the race with relative ease, not far off the outright pace of the leading Toyotas and BMWs with the Panoz Roadster S also showing a good turn of speed. Both R8Cs struggled to get into the race, Wallace having his door sealed up with tank tape to prevent it flying off once more into the French countryside. When the Chequered Flag was finally waved both were in but it had been a nervous time in the Audi Sport UK pit. 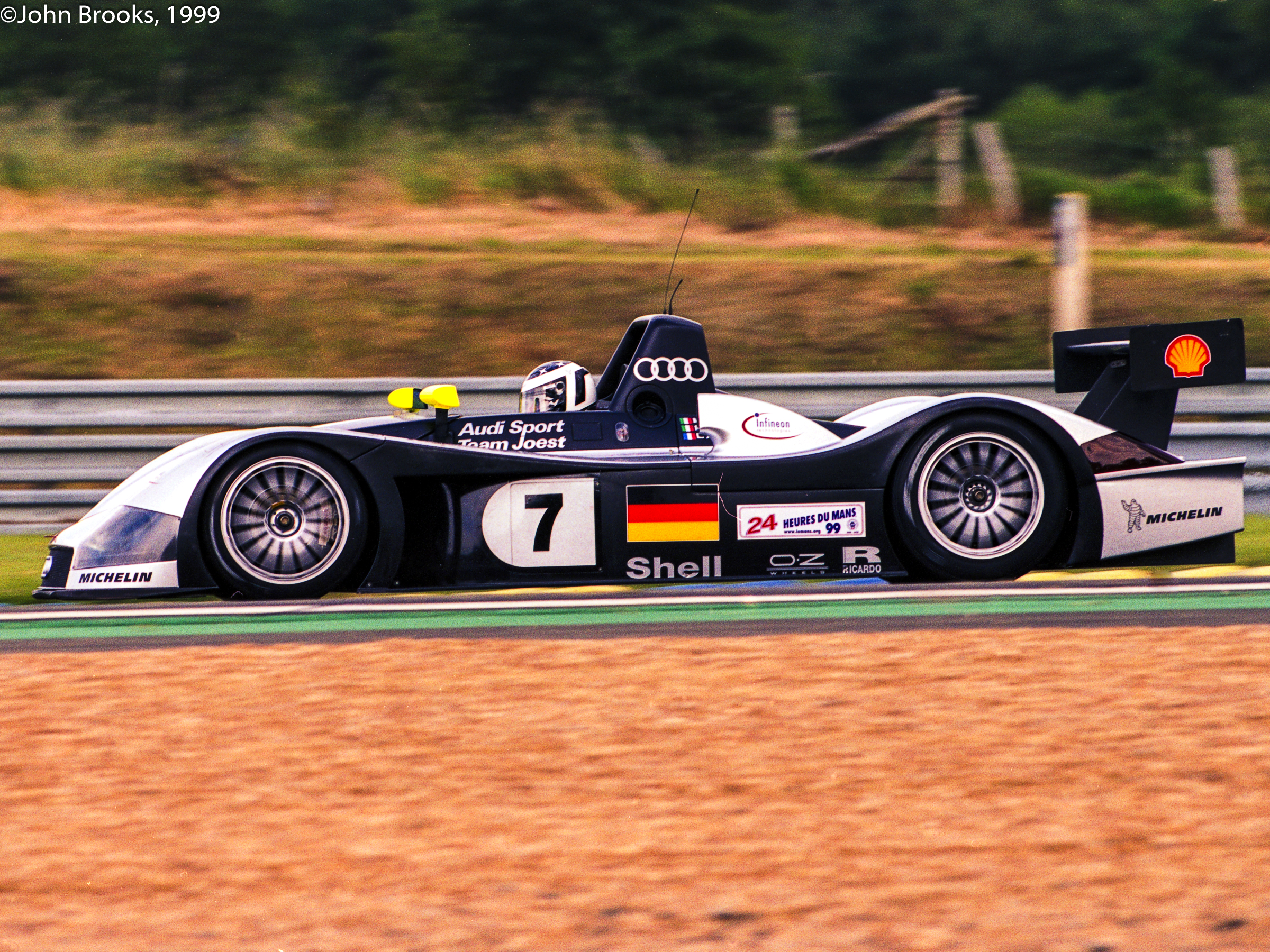 Five weeks later the circus reconvened at Le Mans, this time it would be for real………come back later for the balance of the tale.