Room in the Back, Sir.

Daimler AG has plenty of treasure stored in their press archives. The Formula One stuff, both pre and post war, is familiar, less so some of the tin top material from the 50s and 60s. So this release attracted my attention or rather the images did. This is what we raced and rallied half a century ago. jb 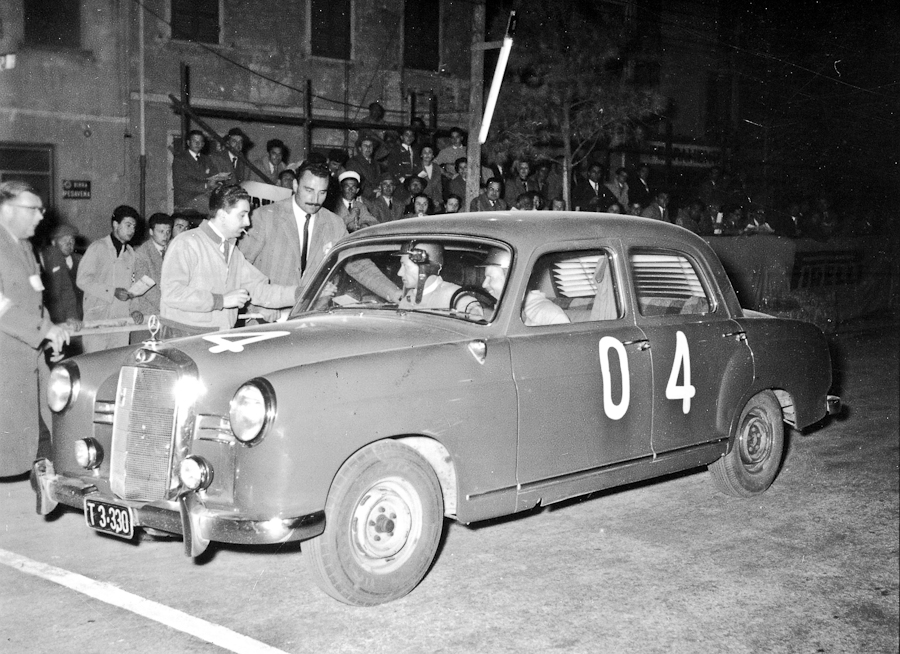 Following the Mercedes-Benz works team’s retirement from Formula 1 and the sports car world championship at the end of the 1955 season, the rallies claimed fans’ full attention as of 1956. The Mercedes vehicles competing on race courses all over the world were fielded for the most part by private teams. While the racing and racing sports cars of previous years had performed superlatively as elite fine-tuned high-end vehicles, the near-series passenger cars now demonstrated their solid credentials in the nitty-gritty of rally racing. Karl Kling was responsible for rally activities as sports director at Mercedes-Benz. In the wake of Alfred Neubauer’s retirement, the ex-racing driver thus assumed a degree of responsibility for upholding the race manager’s legend.

In the late 1950s and early 1960s it was first and foremost the 300 SL sports car and the six-cylinder 220 SE and 300 SE saloons that caught people’s imagination on the roads and gravel tracks all over the world. The team comprising Walter Schock and Rolf Moll was among the contenders who made their mark in these years. The duo, who raced for the Motorsportclub Stuttgart, received comprehensive support from Mercedes-Benz in the form of vehicles and service. Walter Schock competed in the Monte Carlo Rally in the Mercedes-Benz 220 “Pontoon” on 15 January 1956, crossing the finishing line on 23 January just 1.1 seconds behind the winner. 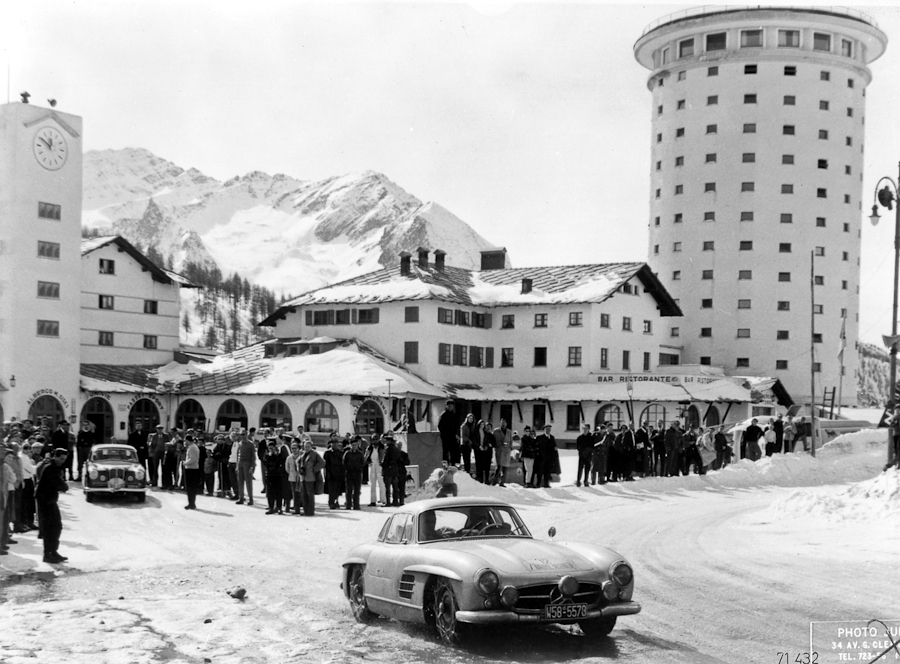 A month later, the Stuttgart duo took part in the Rally del Sestrière in Italy at the wheel of the “gull-winged” 300 SL. In the mountains, the high-performance sports car left the other vehicles in its wake. Schock recalled the Coupé’s outstanding capabilities in the winter rally conditions: “Really fine snow chains on all four wheels allowed us to reach uphill speeds of up to 180 km/h.” The team finished the race as winners on 28 February. Further triumphs ensued in the shape of an overall win in the Acropolis Rally (26 to 29 April 1956) and class victories in the Wiesbaden Rally (21 to 24 June 1956) and the Rally Adriatique (26 to 30 September). Schock also won his class in the Eifel Race and took 2nd place in the fringe race at the Nurburgring Grand Prix meeting. On the back of this performance he became the European touring car champion in 1956 and German champion in the GT class above 2000 cc.

The sports director was also wont to take to the wheel once in a while, putting in sporadic stints as a Mercedes-Benz works driver. Karl Kling achieved an unusual victory in 1959 with Rainer Günzler in the 14,000 kilometre Rally Mediterranée-Le Cap running from the Mediterranean to South Africa: the Stuttgart team embarked on this rally in a Mercedes-Benz 190D, cruising to victory on its diesel power. 1961 saw Kling speeding through Africa at the wheel of a saloon once again. This time he opted for a “fin-tail” Mercedes-Benz 220 SE, winning the Algiers-Lagos-Algiers Rally with Rainer Günzler as co-driver once again. Kling was also on the scene as race manager when works teams competed in selected major races at the wheels of Mercedes-Benz vehicles. 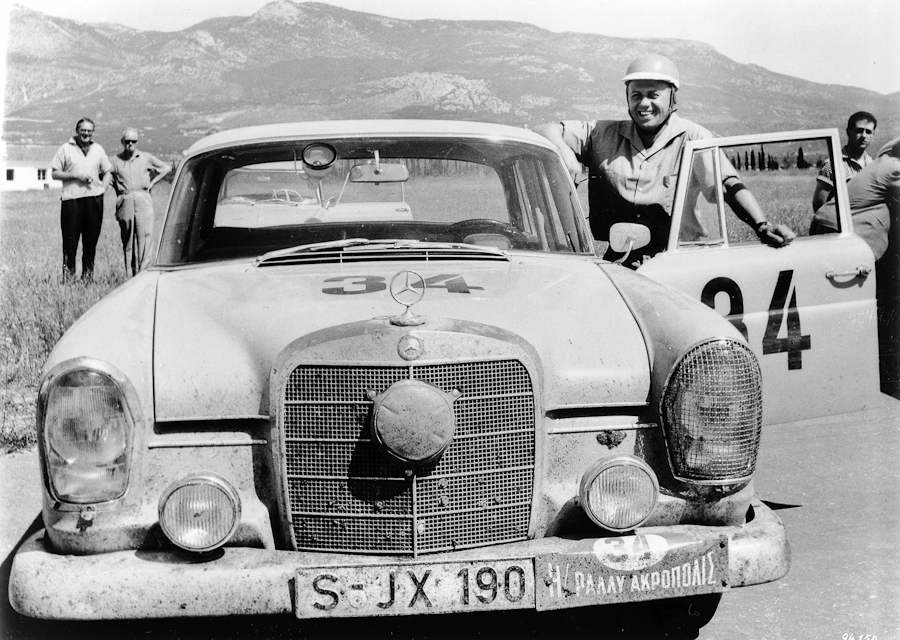 Schock and Moll claimed the European rally championship once again in 1960, in their 220 SE. Their winning ways got off to a bright start at the legendary Monte Carlo Rally. The first final win by a German team in this competition was part of a triple success for Mercedes-Benz, with driver teams Eugen Böhringer/Hermann Socher and Eberhard Mahle/Roland Ott taking 2nd and 3rd places. Following this triumph in 1960, the sports press called on Mercedes-Benz to return to the world’s racing circuits with works vehicles on a permanent basis. But sports director Kling was clear in his words, saying “This success will encourage us to carry on putting great effort into rallies. But Mercedes does not intend to return to motor racing.” 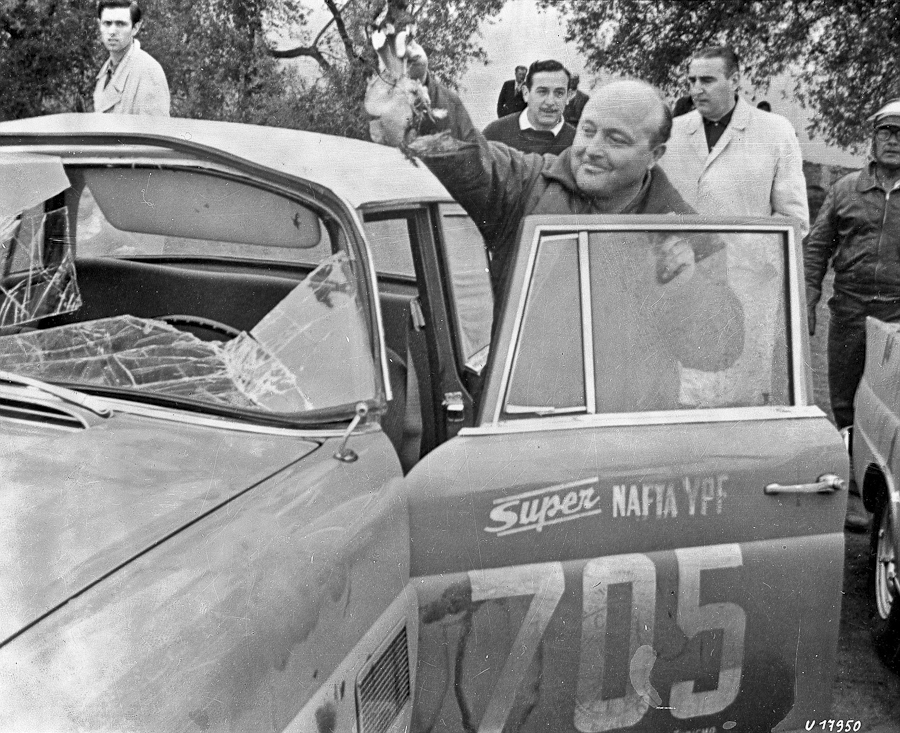 In the 1960s, Mercedes-Benz teams took part in the “Gran Premio Argentina” road race on several occasions. On 26 October 1961, Walter Schock competed in this very special rally, which was contested by a total of 207 drivers. A tough race was in store for the participants on a route covering 4600 kilometres and taking in a difference in altitude of around 3000 metres. The hard slog ended on 5 November with a double victory for Mercedes-Benz. Walter Schock and Rolf Moll were the first to pass the finishing line, followed by Hans Herrmann and Rainer Günzler. “That must be the toughest race I’ve ever competed in,” said rally champion Schock on his return from South Africa. The Mercedes-backed teams received personal support from Juan Manuel Fangio together with race manager Karl Kling. As this competition was very important for the American market, Mercedes-Benz continued its involvement in the coming years, too. 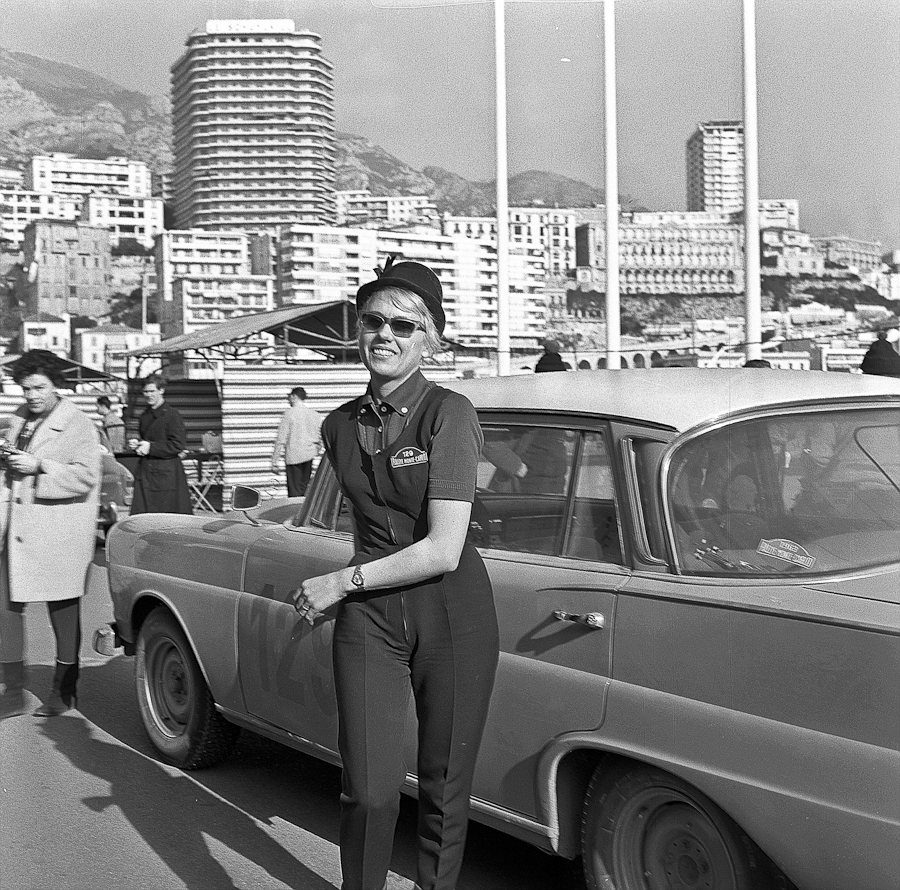 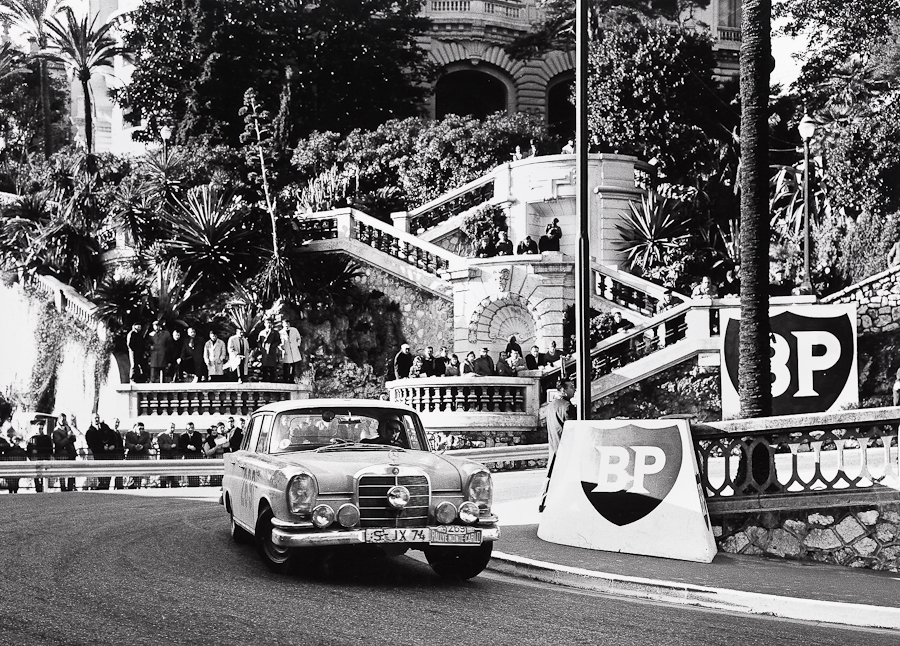 1962 saw a sensational win by the ladies’ team comprising Ewy Rosqvist and Ursula Wirth, while Eugen Böhringer sped to victory in 1963 and 1964, crossing the finishing line with two other Mercedes-Benz cars directly behind him in each case. 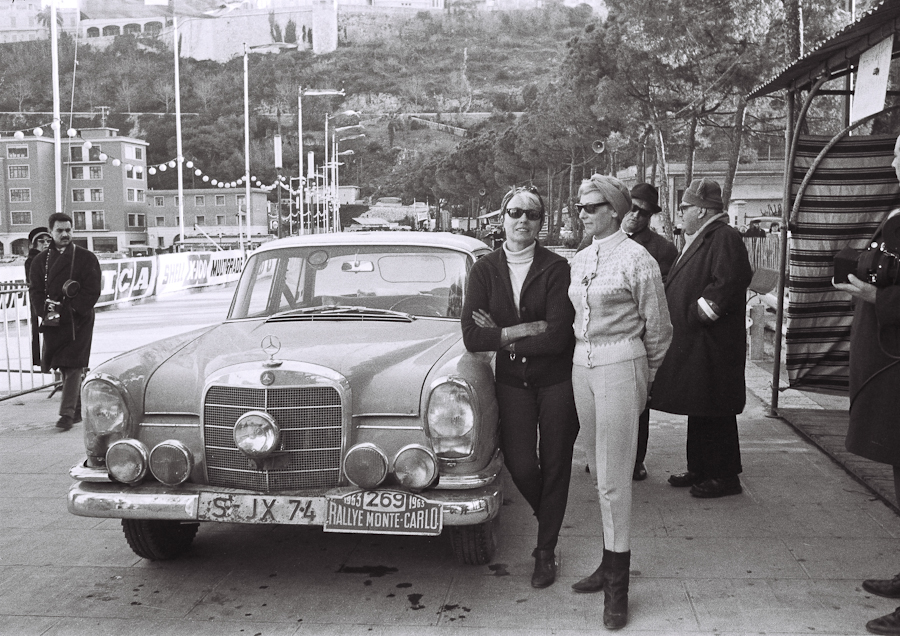 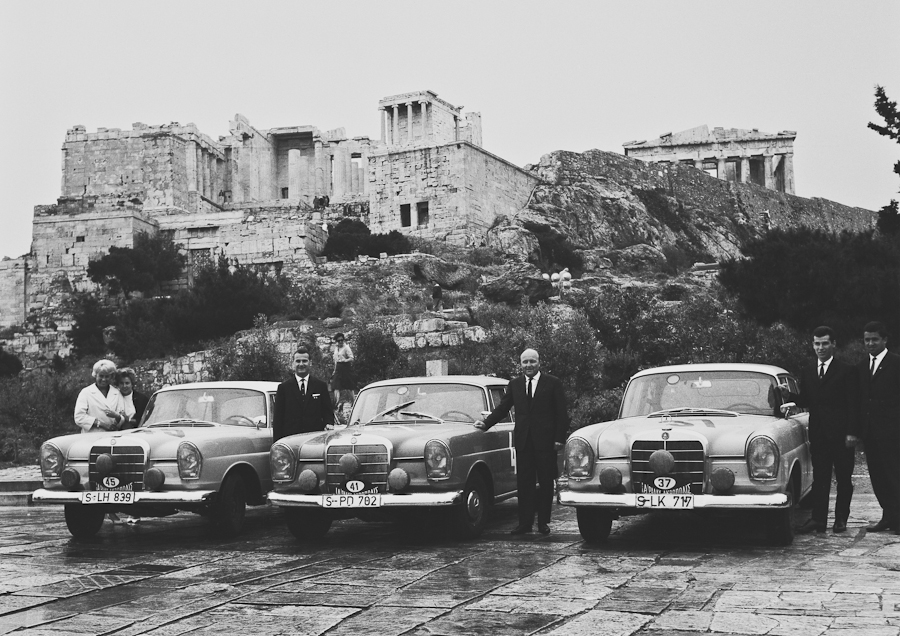 Böhringer, who drove Mercedes-Benz cars in rallies as of 1957, won the European rally championship in 1962 at the wheel of a Mercedes-Benz 220 SE. With his co-drivers Peter Lang and Hermann Eger, Böhringer notched up points in various races throughout this season, including the Monte Carlo Rally (2nd place), the Tulip Rally (7th place), 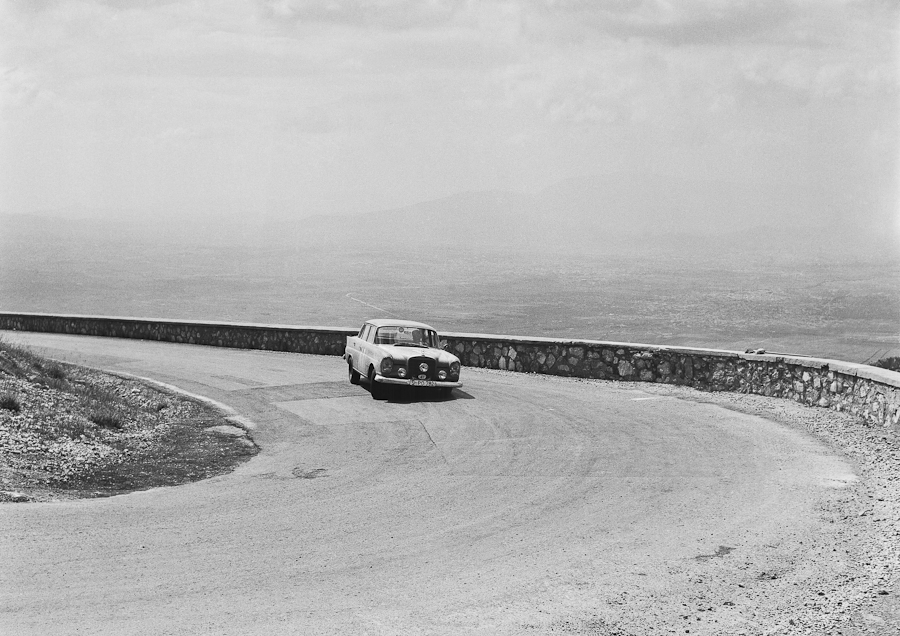 Motor racing on ancient terrain: Eugen Böhringer and Rolf Knoll (starting number 41) wrap up the 11th Acropolis Rally in May 1963 in a Mercedes-Benz 300 SE touring car. They were winners in their category and overall winners. 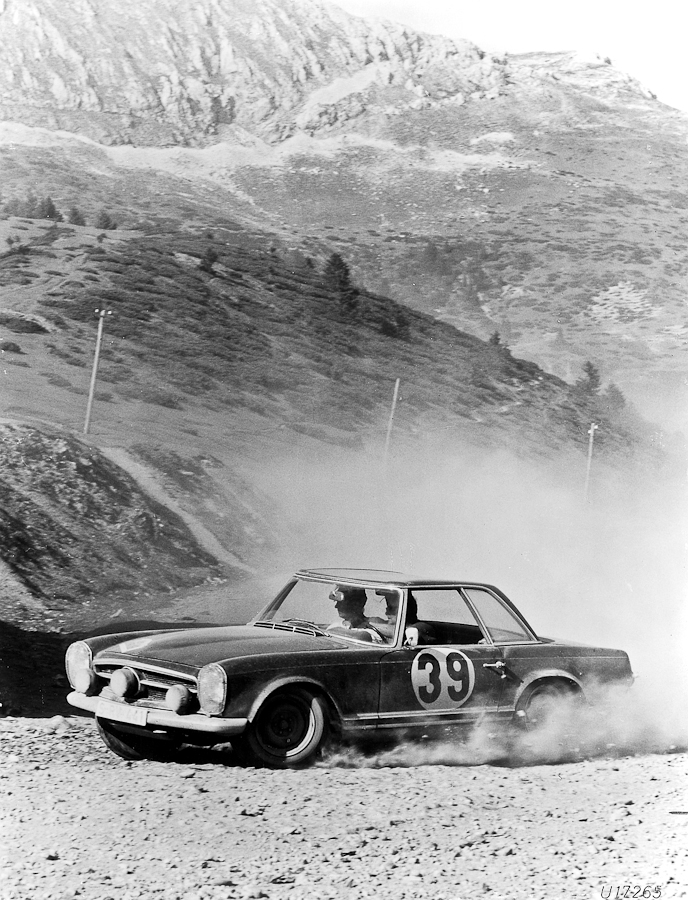 A highlight of the year was the victory in the legendary Liège-Sofia-Liège road race in the Mercedes-Benz 220 SE. 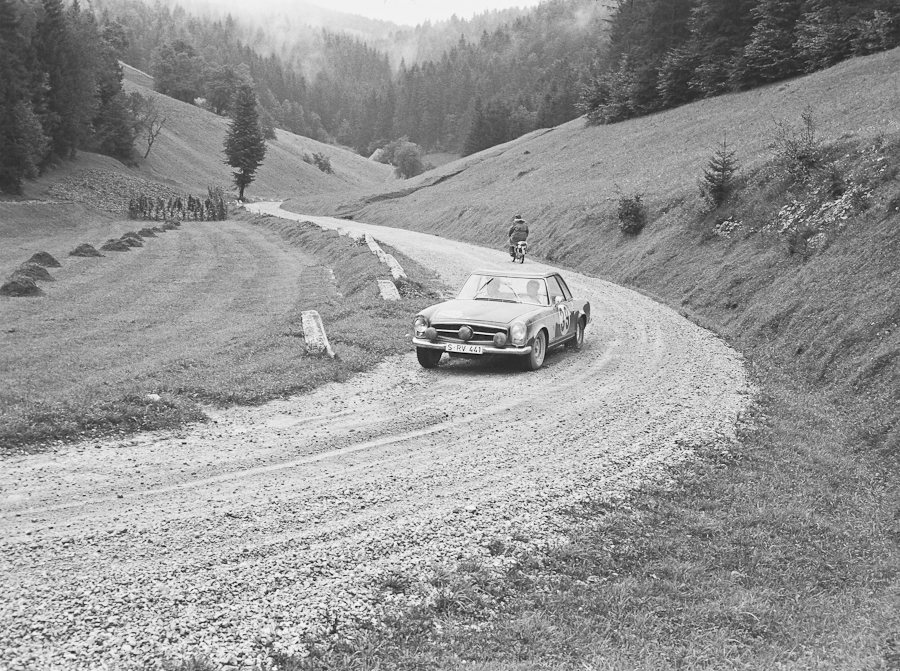 The Stuttgart-based driver was also victorious when this marathon across Europe came around again in 1963. This time, the destination was Bulgaria rather than Rome, and the winning vehicle was a Mercedes-Benz 230 SL “Pagoda”. This was the first time ever that a driver had achieved two successive victories in this gruelling rally. 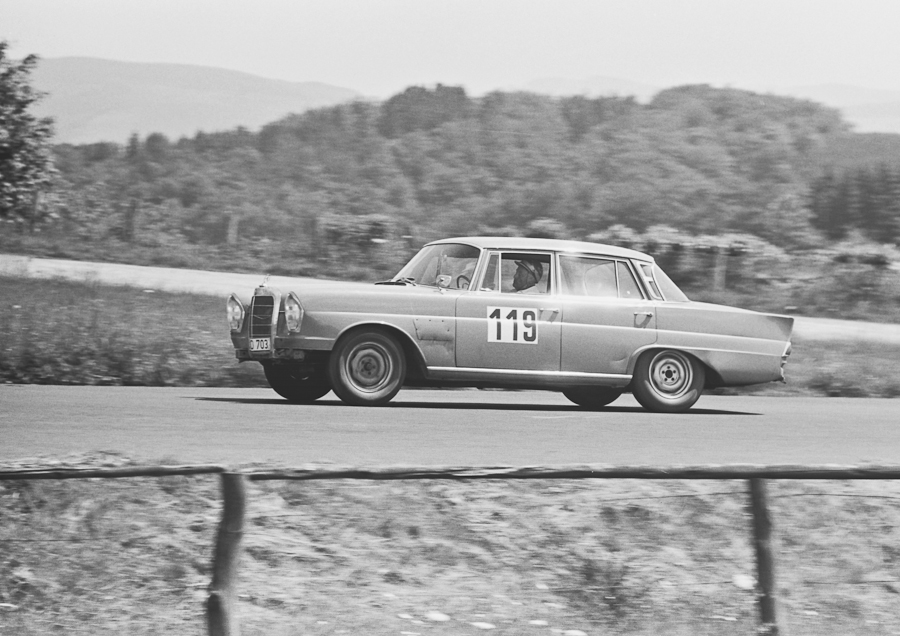 Mercedes-Benz was also successful in North America: the Mercedes-Benz 300 SLS was designed especially for the American sports car championship in 1957. It was based on the series-production 300 SL Roadster sports car, with a 900 kilogramme reduction in weight and engine power boosted from 215 hp (158 kW) to 235 hp (173 kW) to turn it into a highly competitive vehicle once again. The SLS provided Paul O’Shea with his third title in succession, following two wins in the “gull-winged” 300 SL in 1955 and 1956. 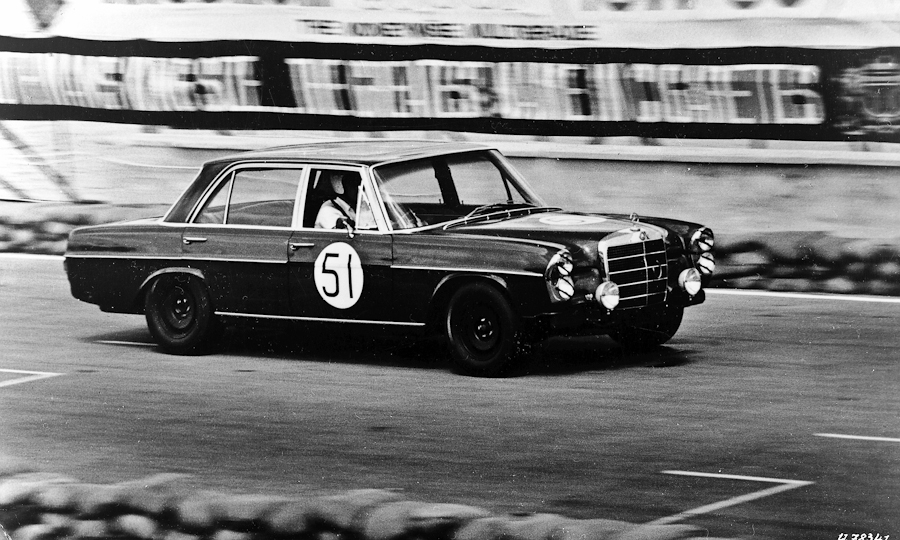 The powerful eight-cylinder 300 SEL 6.3 saloon only saw works team action in one race, winning the six-hour touring car race in Macao in 1969 with Erich Waxenberger at the wheel. The oil crisis at the beginning of the 1970s put an end to this saloon’s motorsport career. Automobile historian Karl Eric Ludvigsen emphasizes the importance of this break in Mercedes-Benz’s motor racing history: “The oil crisis resulted in the first interruption to Daimler-Benz’s long tradition triggered by external events. The company’s racing traditions began around the turn of the century, with the only hiatus – apart from the war years – occurring in 1955; every year, there was always one or more Benz, Mercedes or Mercedes-Benz cars in at least one key race, with either direct or indirect support from the works.” 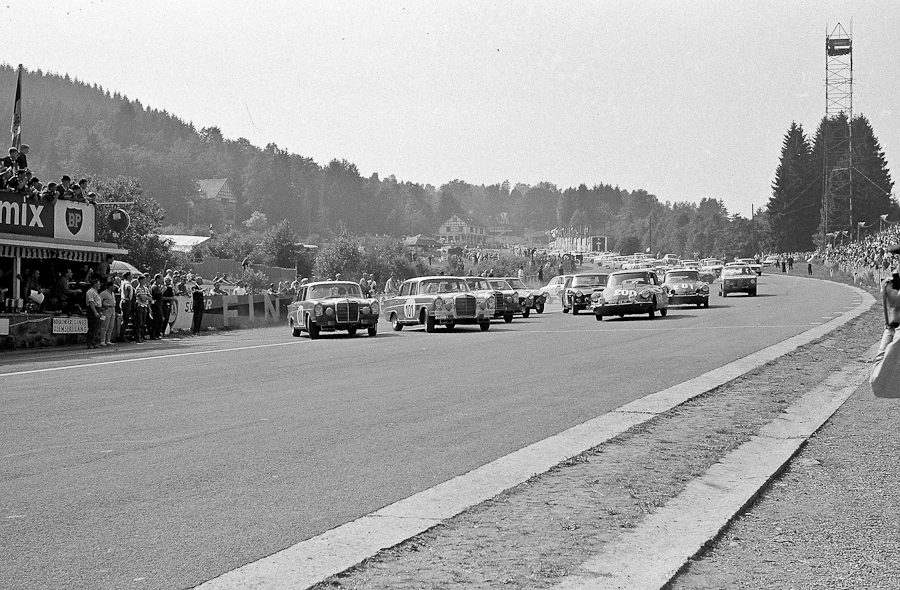 Private drivers continued Mercedes-Benz’s racing traditions, however. Increasingly, their vehicles came to be prepared for competitive use by AMG – a company founded in Burgstall near Stuttgart by former Daimler-Benz employees Hans-Werner Aufrecht and Erhard Melcher in 1967 as an “engineering firm pursuing the design, testing and development of racing engines”.  The leading products in the company’s early years included the refined version of the Mercedes-Benz 300 SEL with a 6.8-litre engine, which claimed a class victory and took 2nd place overall in the 24h Spa Francorchamps race.  The independent tuning firm made a name for itself preparing vehicles for racing competitions over many years, before it was taken over in its entirety by the then DaimlerChrysler AG.