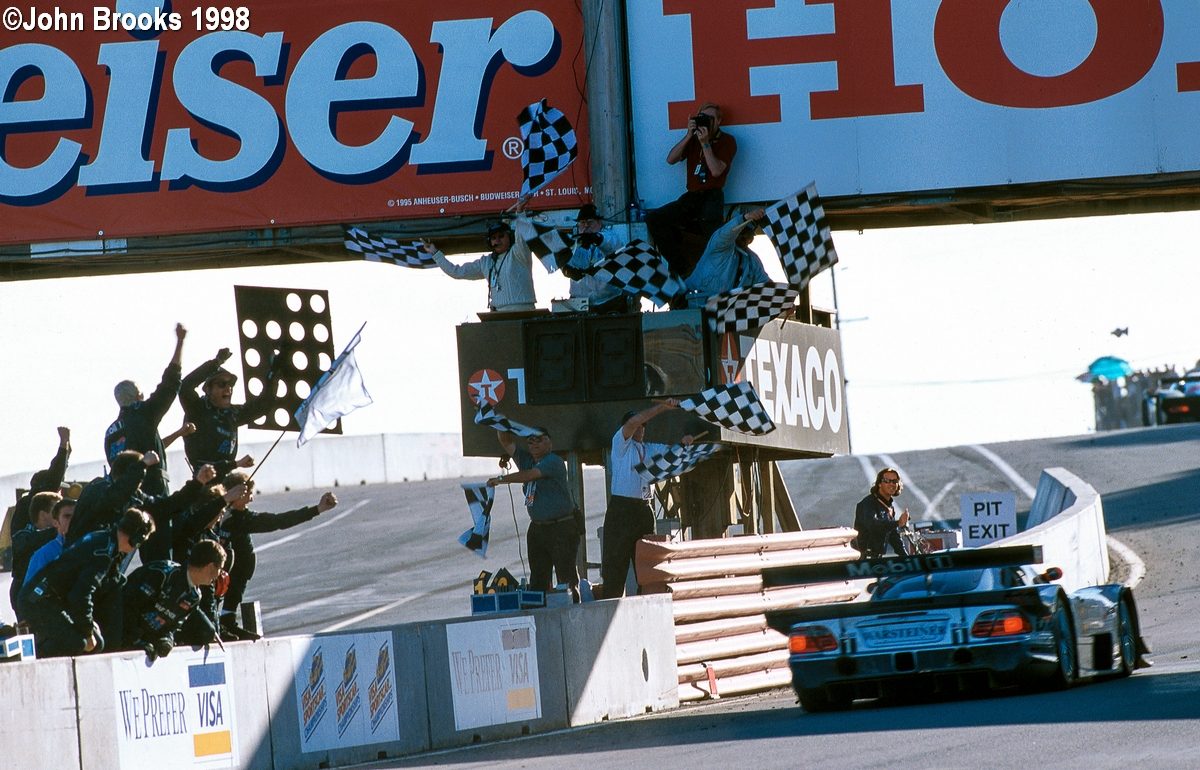 Autumn or Fall as the locals would say is a very agreeable time to be in California’s Monterey Peninsula. This weekend the 2018 Intercontinental GT Challenge will reach its climax after a season of classic endurance GT races. SRO has history at the fantastic Laguna Seca track dating back to its earliest days. 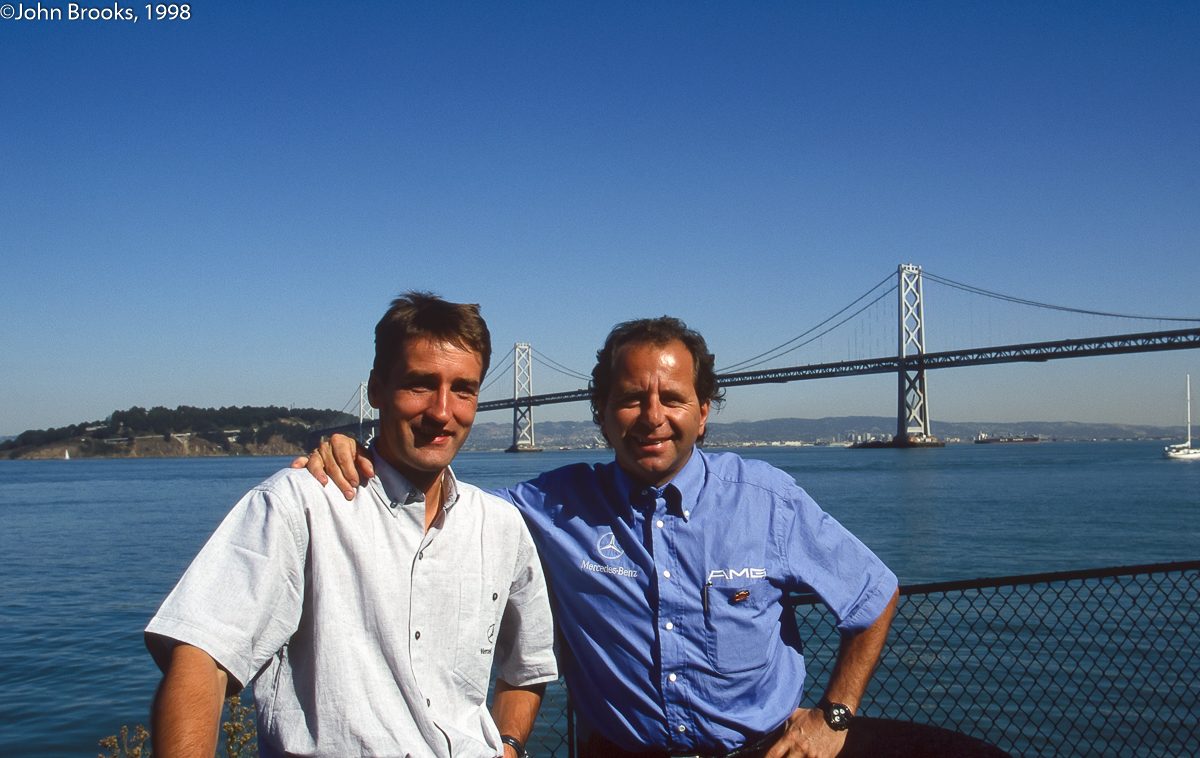 Some 20 years ago the final round of the 1998 FIA GT Championship, was held at Laguna Seca. In the top GT1 class it was scheduled to be a classic encounter between the veteran champion, Klaus Ludwig and the bright star emerging to ascendancy, Bernd Schneider. Yes of course they had co-drivers, Ricardo Zonta and Mark Webber, but despite the obvious talent and potential of that pair all eyes were on the two Germans of different generations. Schneider had taken the title in 1997 and had looked favourite to repeat this for most of the 1998 season. 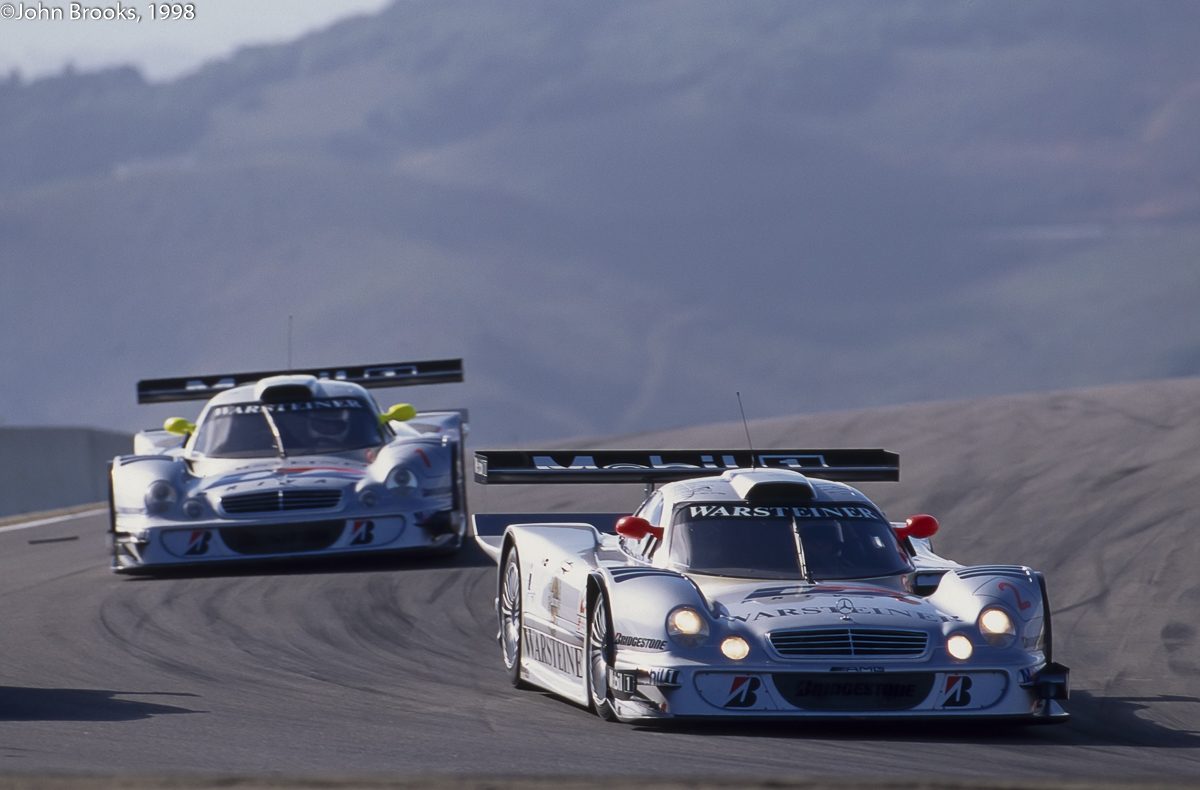 What added spice to the contest was that they were both driving for the AMG Mercedes team, for the majority of the season in the all-conquering Mercedes-Benz CLK-LM. Approaching the decisive race, the score sheet showed Ludwig and Zonta ahead of their rivals by four points, the margin between first and second place on track. However, Schneider and Webber had racked up five wins to four, so if the points tally was equal after Laguna Seca they would be champions on the basis of more race wins. It was a case of the winner takes it all and second place would be nowhere. 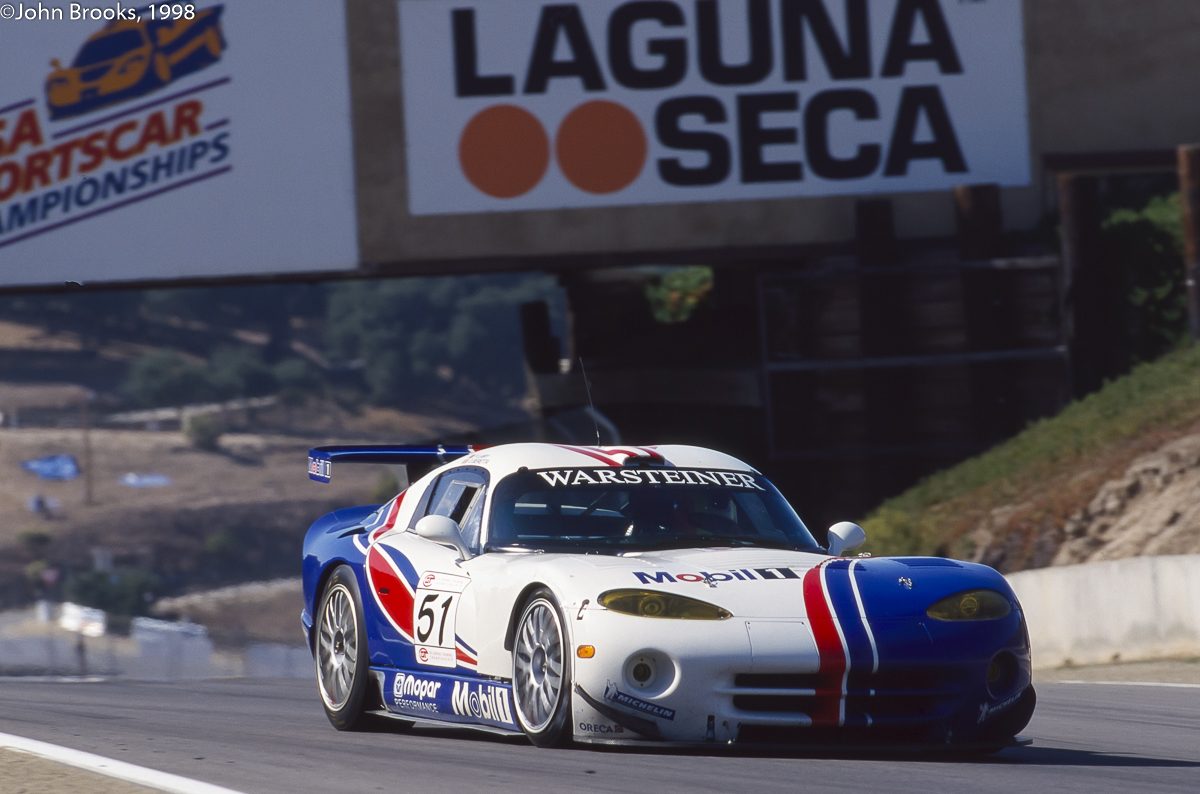 The GT2 class was a complete contrast to this close contest in GT1.  The Oreca Chrysler Viper team dominated proceedings, winning eight out of the nine rounds already run. Olivier Beretta and Pedro Lamy had grabbed the Drivers’ Title with seven victories, Monterey was expected to be more of the same. Could either the Roock Racing Porsches or Cor Euser’s Marcos challenge the Viper’s hegemony? 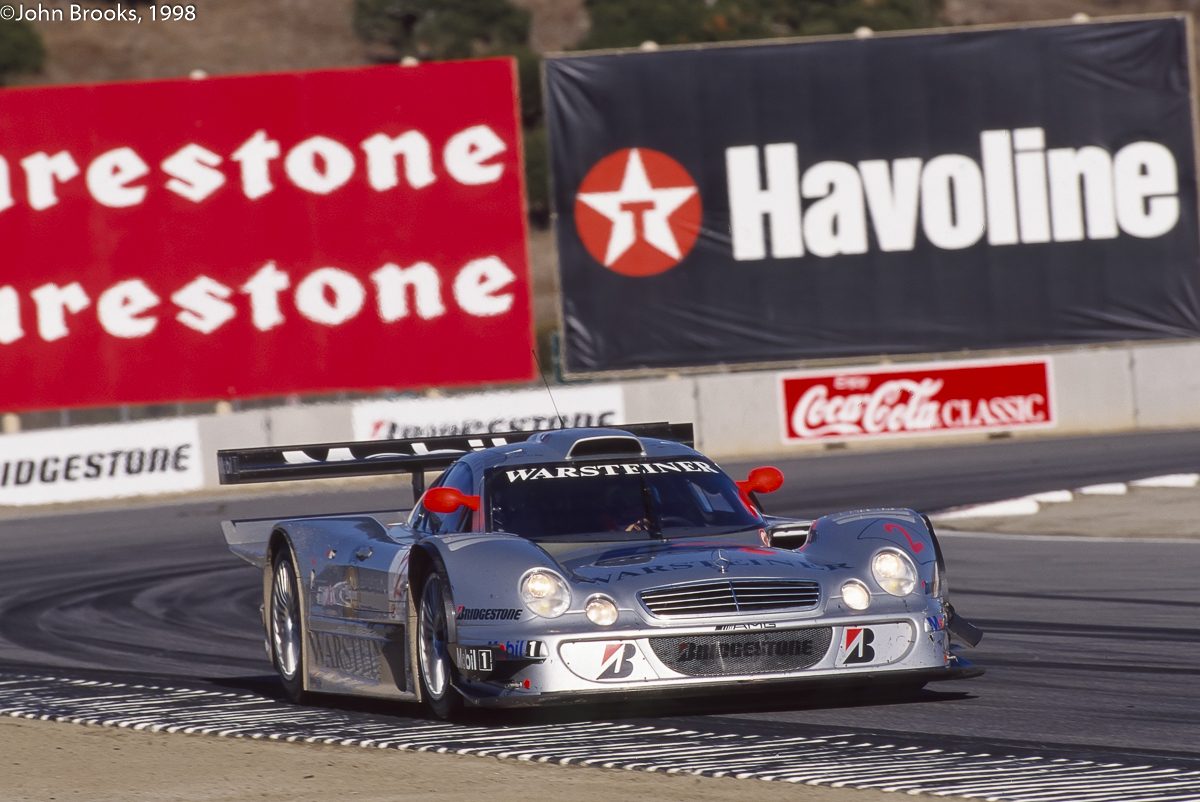 1998 was an almost perfect season for the AMG Mercedes squad. The only hiccup had come during the Le Mans 24 Hours when both cars went out early after suffering engine failure. A seal in the power-steering hydraulic pump failed and that trivial fault fatally damaged the engine. It was a most un-Mercedes moment as otherwise they were in a different league to their closest and only serious competitor, Porsche AG’s 911 GT1 98. 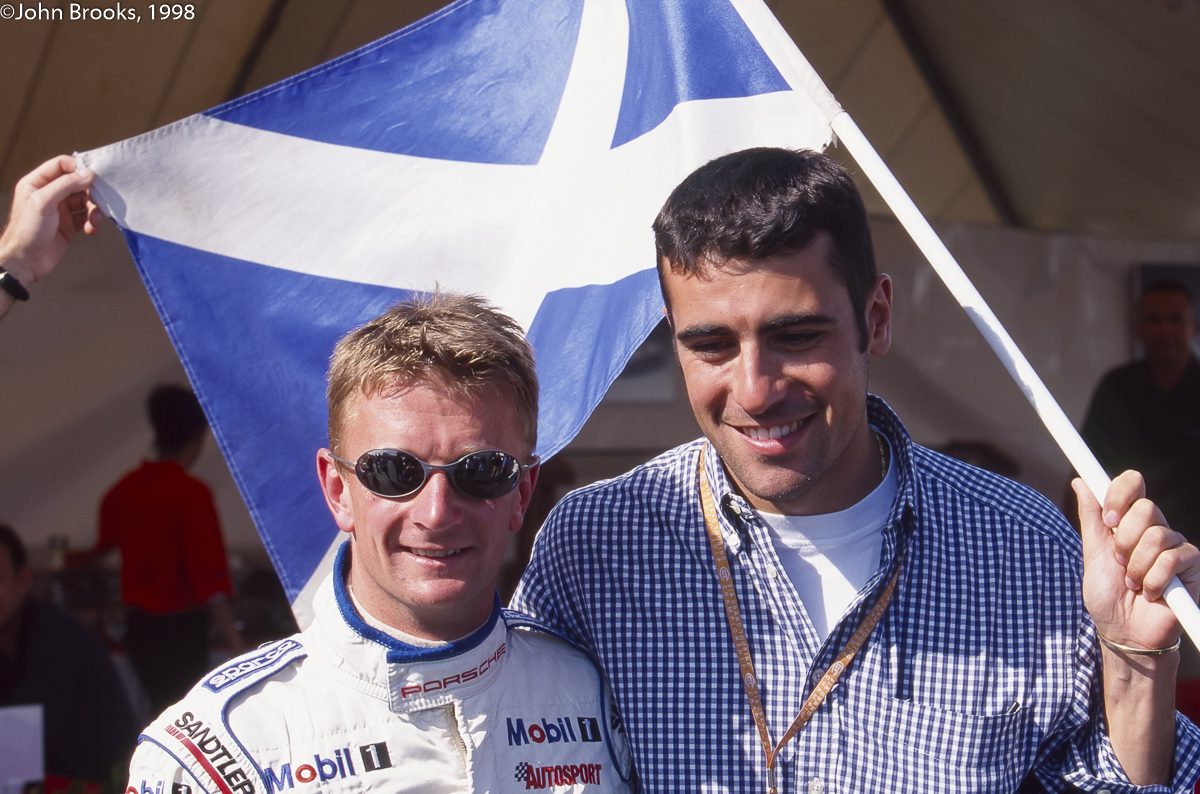 In reality the Porsche was only a threat at certain kinds of circuits where the disadvantage of their turbocharged engines as regulated under the FIA GT1 rules package was not a factor. And even then, it was almost always Allan McNish who was able to challenge the Mercedes duo, we would grow accustomed to the electric pace of the Scot in the following decade, but it was something of an eye opener in 1998. 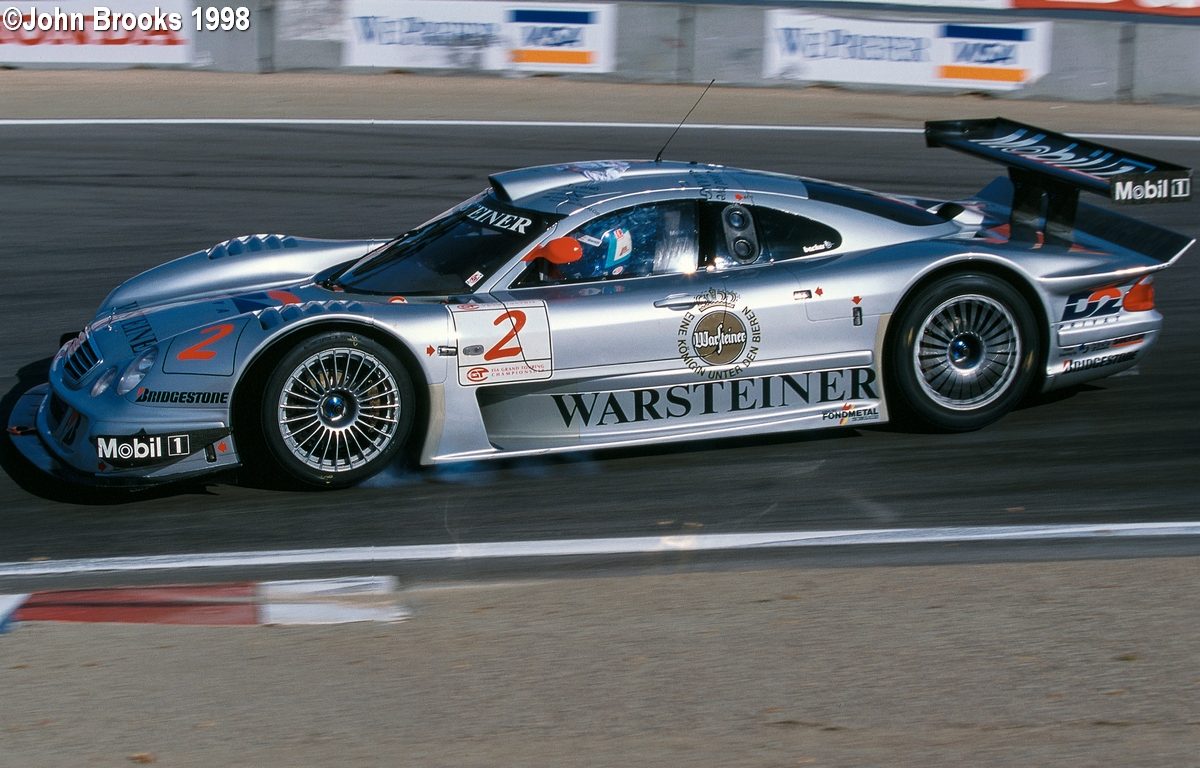 Adding even more spice to the contest was the announcement by Ludwig that he would retire from motor sport after the race in Monterey. His career had included three victories at Le Mans and five DTM titles, could he add the FIA GT Championship to the list? Klaus certainly was motivated, and said before the race, “Laguna Seca is one of the tracks I love the best. It’s a demanding track and an exciting track – the Corkscrew, in Europe, impossible! To win there would be very special for me.” 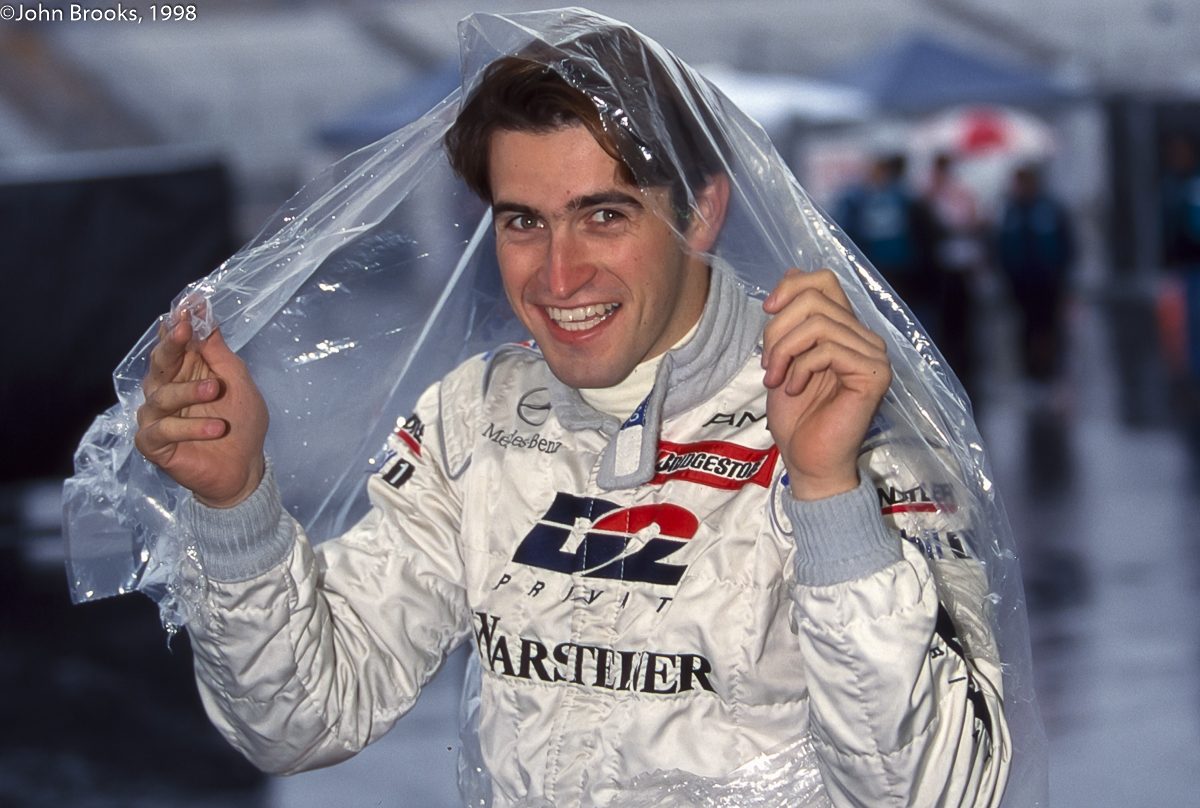 Ludwig was not the only one departing the GT scene, Ricardo Zonta was bound for Formula One, another Brazilian on the conveyor-belt of talent that started with Emmerson Fittipaldi and continued through Piquet, Senna, Barrichello and Massa amongst many others. 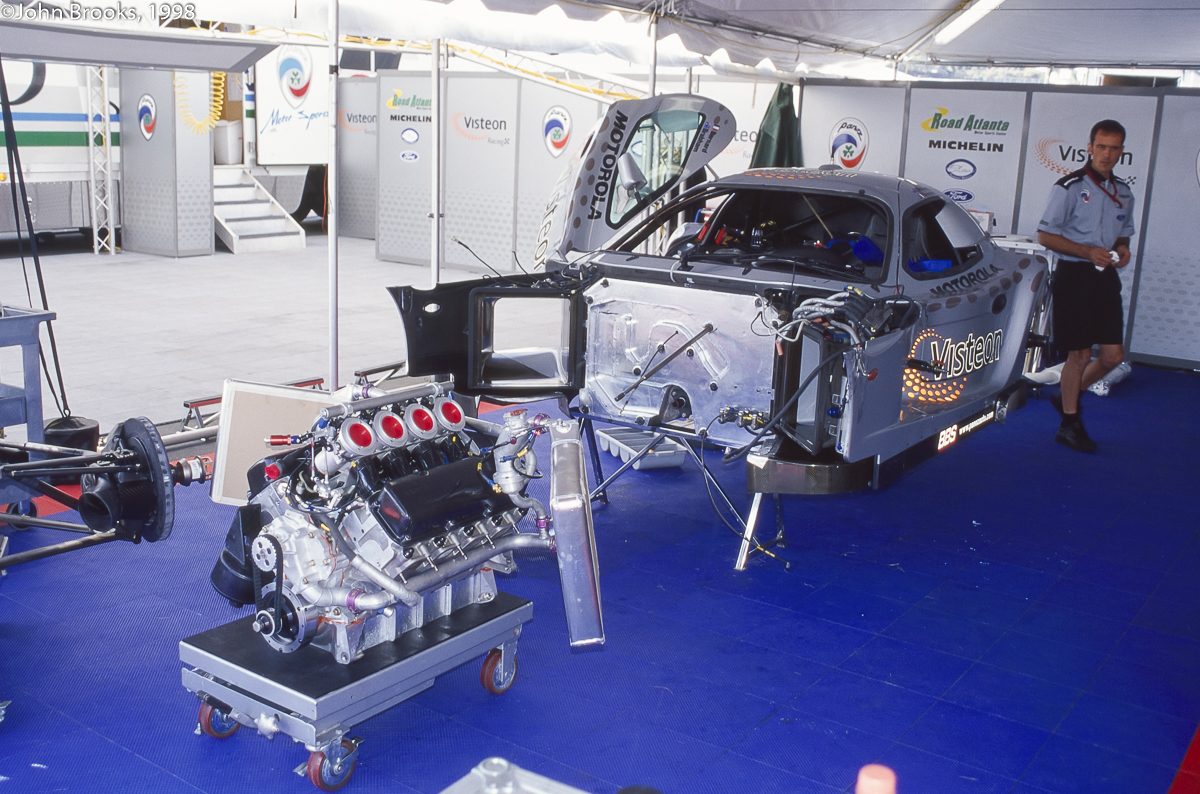 However, there was still a Championship to be decided. Most Europeans like myself imagine that California is a place of sunshine and beaches, blondes and brunettes of either sex, all tanned, forever young. So, it was something of a shock arriving at the track in anticipation of Saturday Morning’s Qualifying session to conditions usually found at the Nürburgring or Spa, torrential rain. The first session was stopped after 15 minutes as a river of mud was blocking the Corkscrew, not quite how I imagined the weather would be on the West Coast. 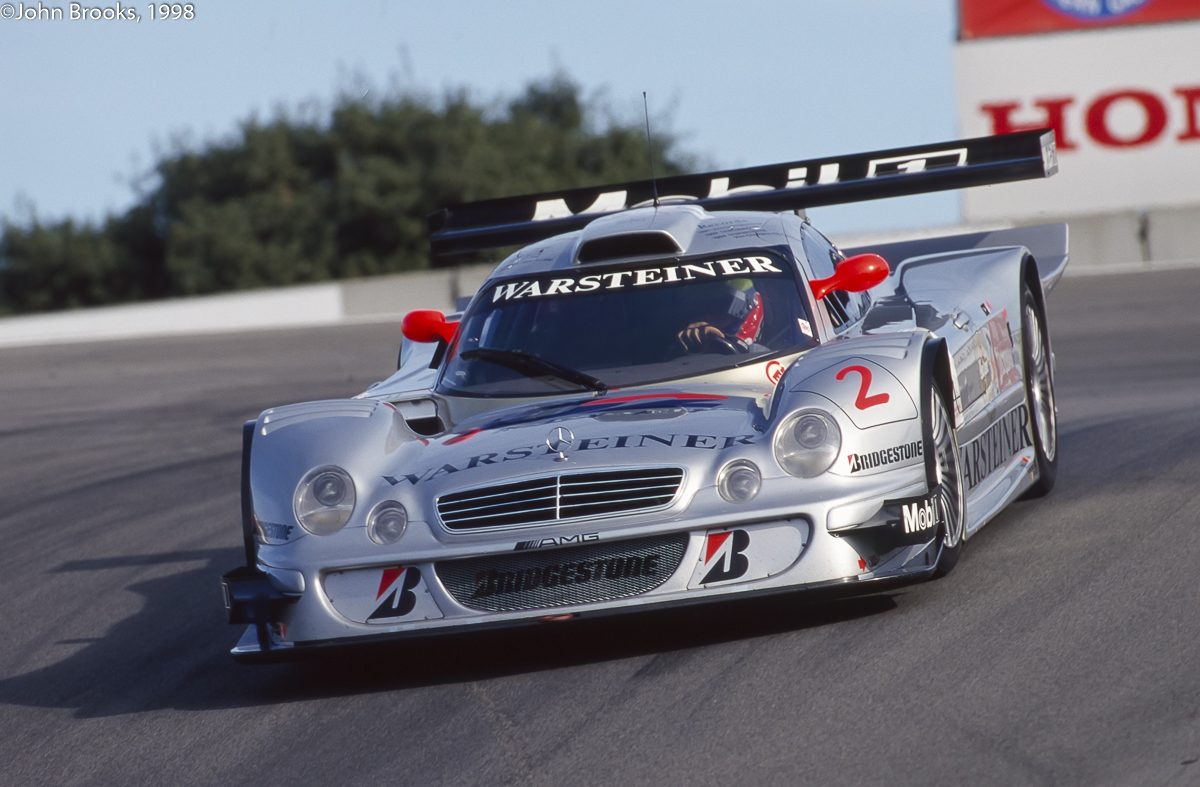 The afternoon’s conditions were much better and the advantage swung Ludwig’s way courtesy of Zonta. The Brazilian’s pole position lap of 1m16.154s was 0.434 seconds faster than Schneider’s best.  Afterwards Ricardo explained. “My qualifying lap was really good but not without a problem. Because I experienced a little brake balance problem, I got off-line in the last corner where it was a little wet. That might have cost me some time.” 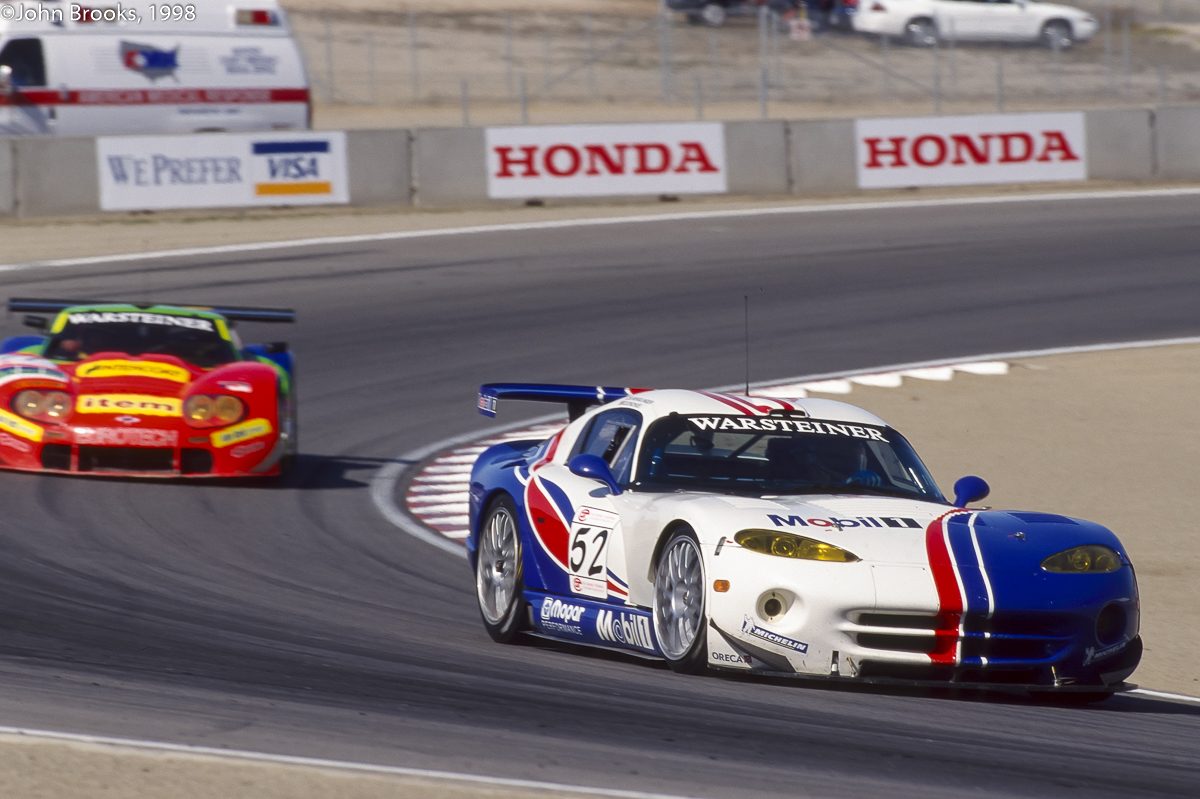 In GT2 the Viper effort was reduced to one car after David Donohue crashed out on Friday. He hit the wall hard as a result of brake failure, the car caught fire and was too badly damaged for any immediate repair. 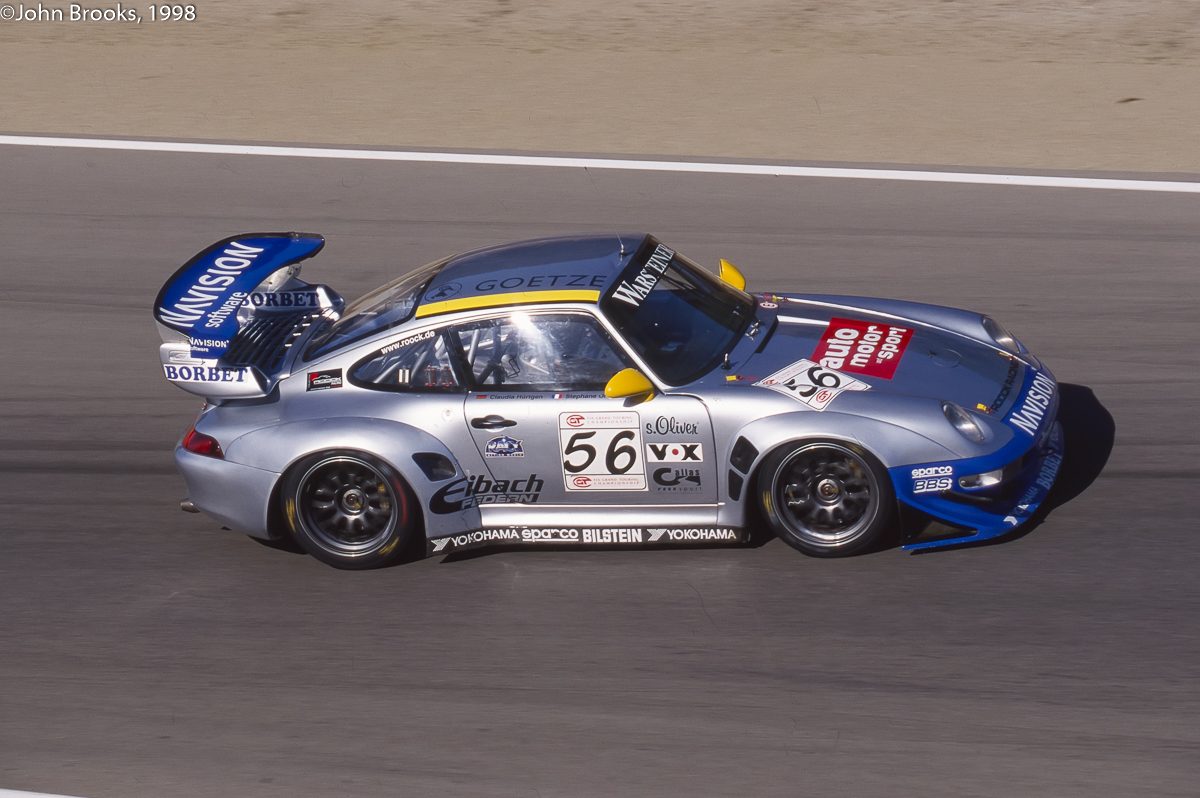 Class Pole was grabbed by a very determined Stéphane Ortelli in his Roock Racing Porsche 911 GT2 with a 1:24.851 lap, less than a tenth of second advantage over Cor Euser’s Marcos LM 600 who was fractions faster than Beretta’s Viper. This could be a race to match the GT1 battle, or so we hoped. 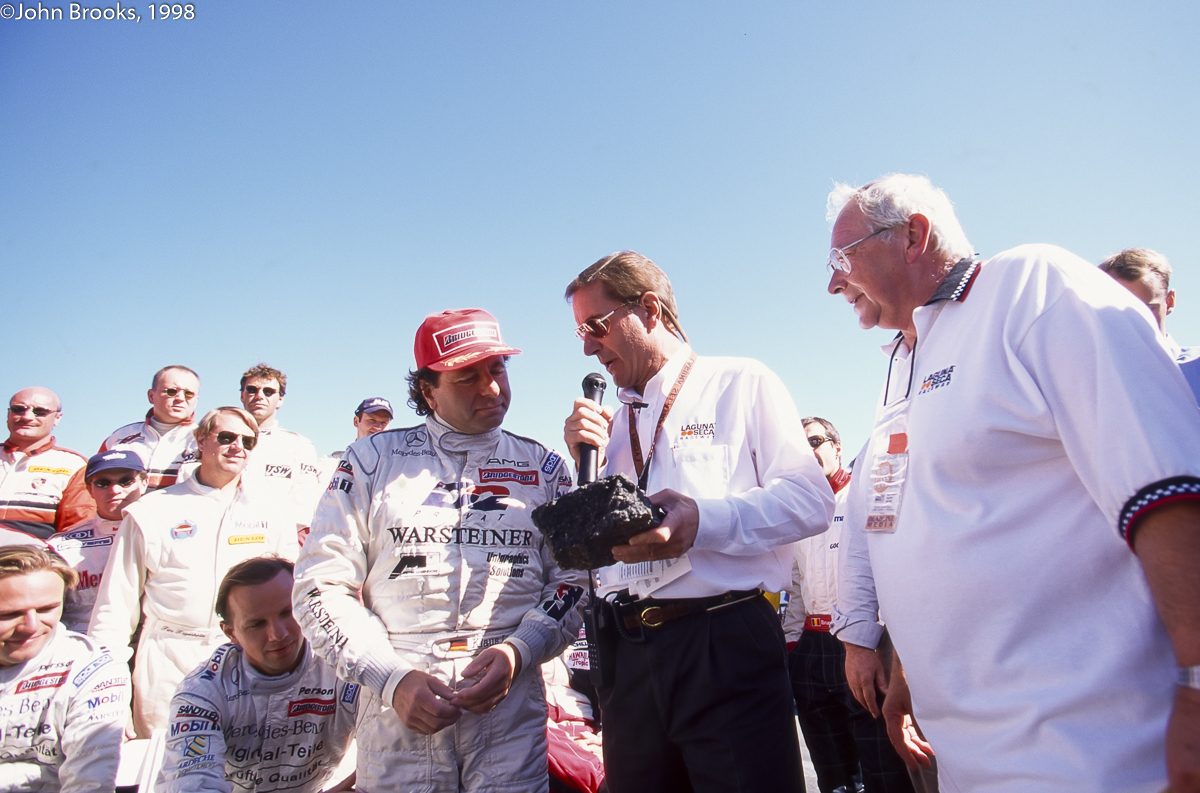 After the traditional end-of-term drivers’ photo Klaus was presented with a lump of the track as a memento of his final race, it seemed a very Californian thing to do. 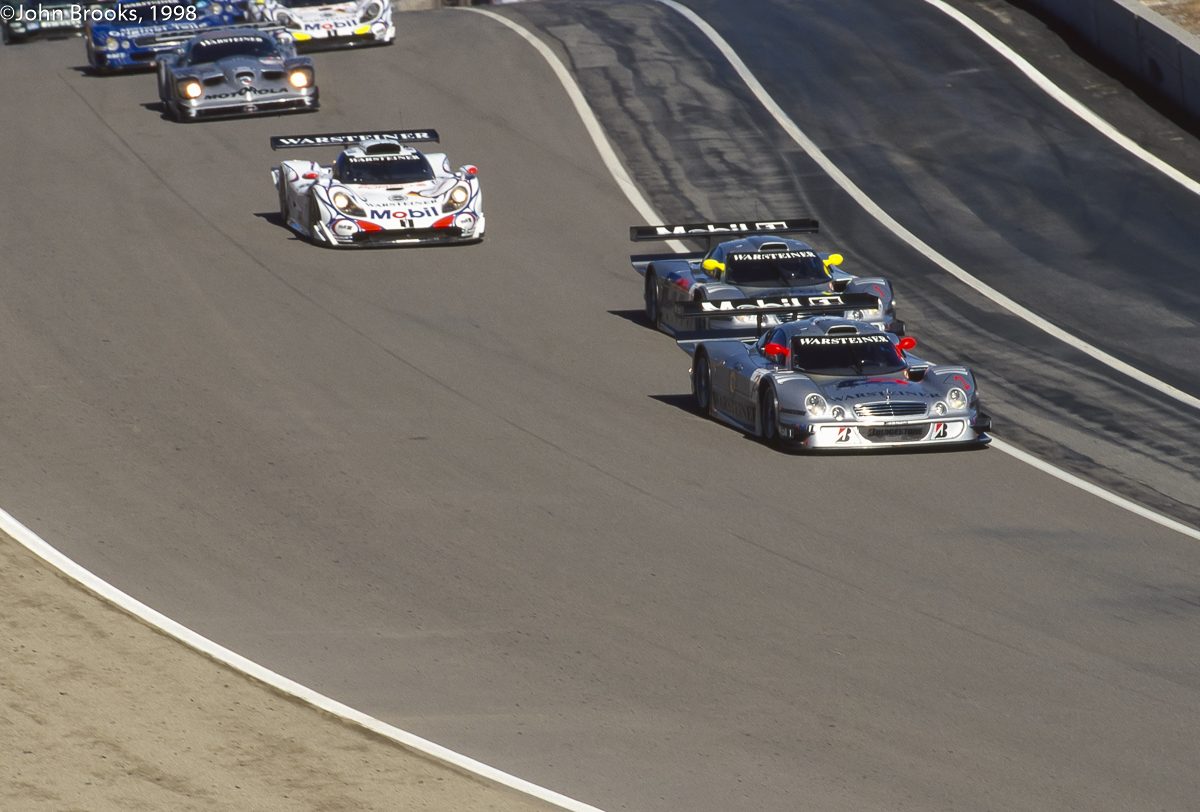 AMG Mercedes had the front row to themselves, who would emerge from Turn One in the lead, Schneider or Ludwig? Everyone held their breath but in the end the veteran got the best start and quickly pulled away from his rival. 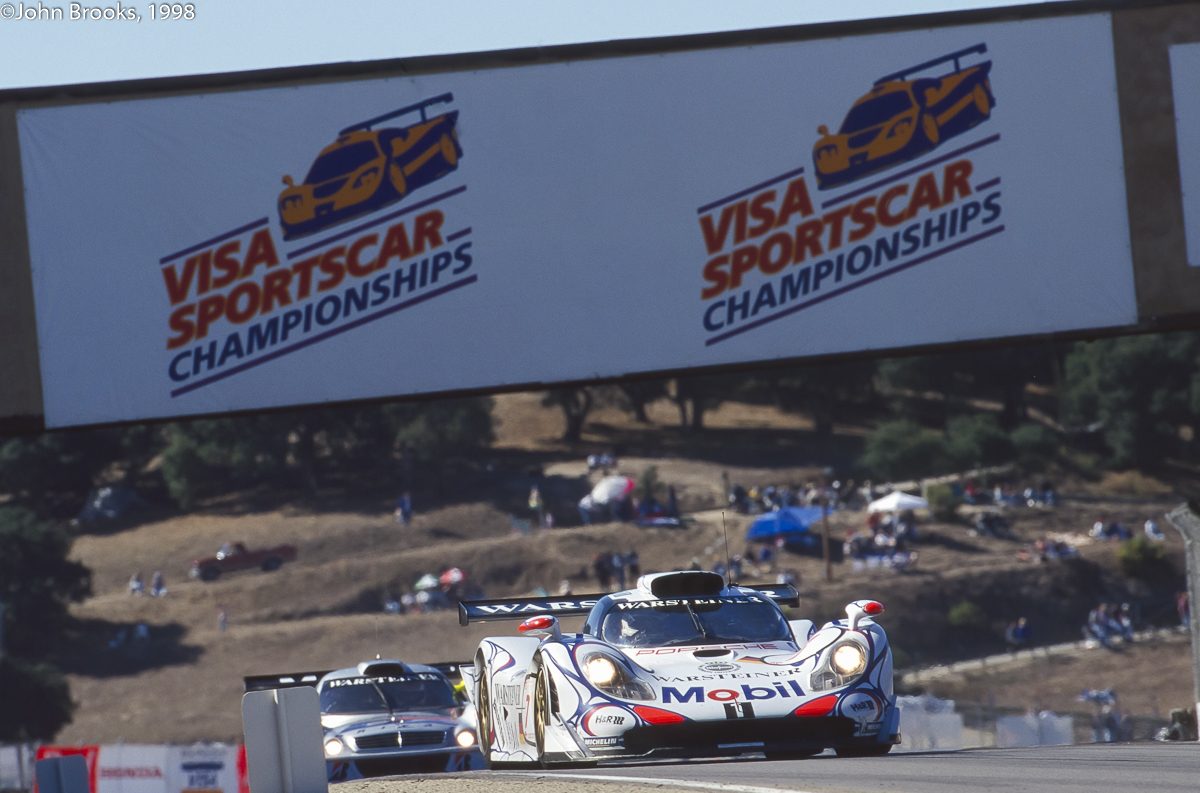 In any case Bernd had his mirrors full of a Porsche with McNish making a nuisance of himself, even passing the Mercedes after a few laps. 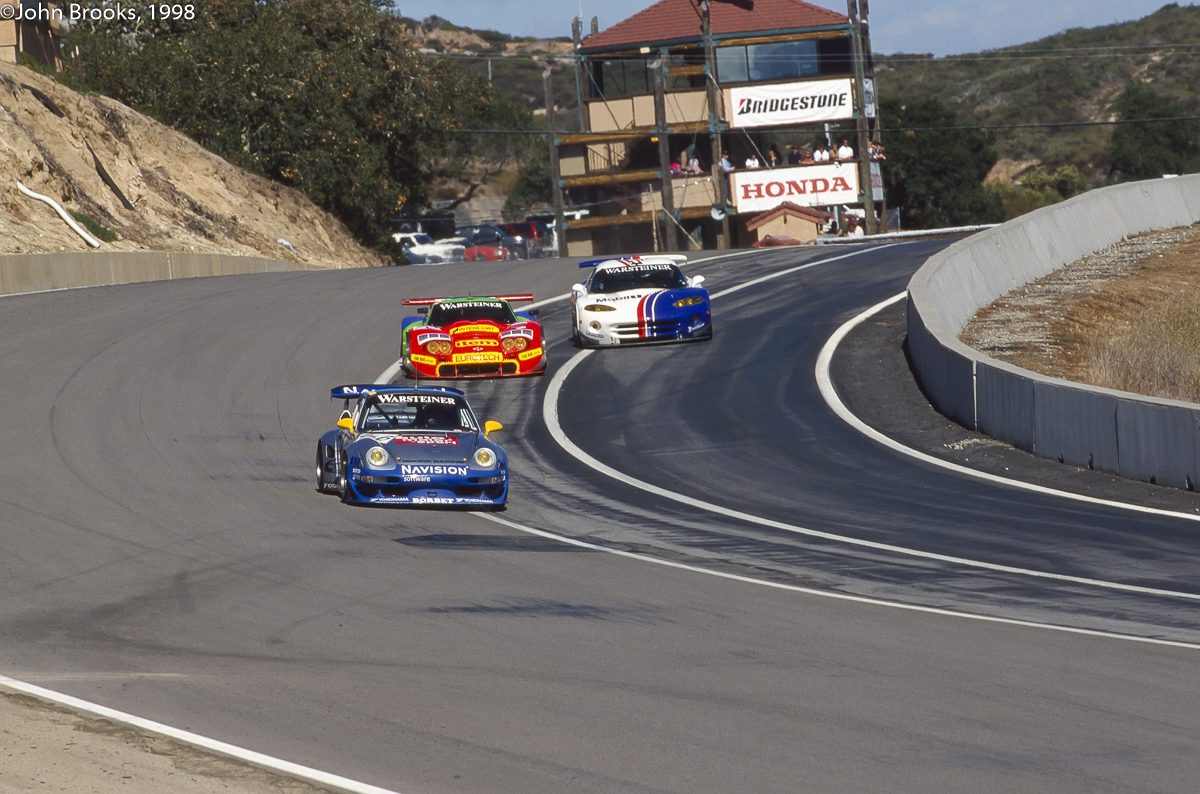 GT2 also saw a fierce tussle for the lead in opening laps before the natural order of things asserted itself with Beretta grabbing the lead. Two of the major challengers to the all-conquering Viper both retired with gearbox failure after just seven laps, that was the end of Jan Lammers in the Konrad Porsche and also Claudia Hürtgen in the 911 she shared with Ortelli. A few laps later and the Marcos was out. Also with transmission woes. 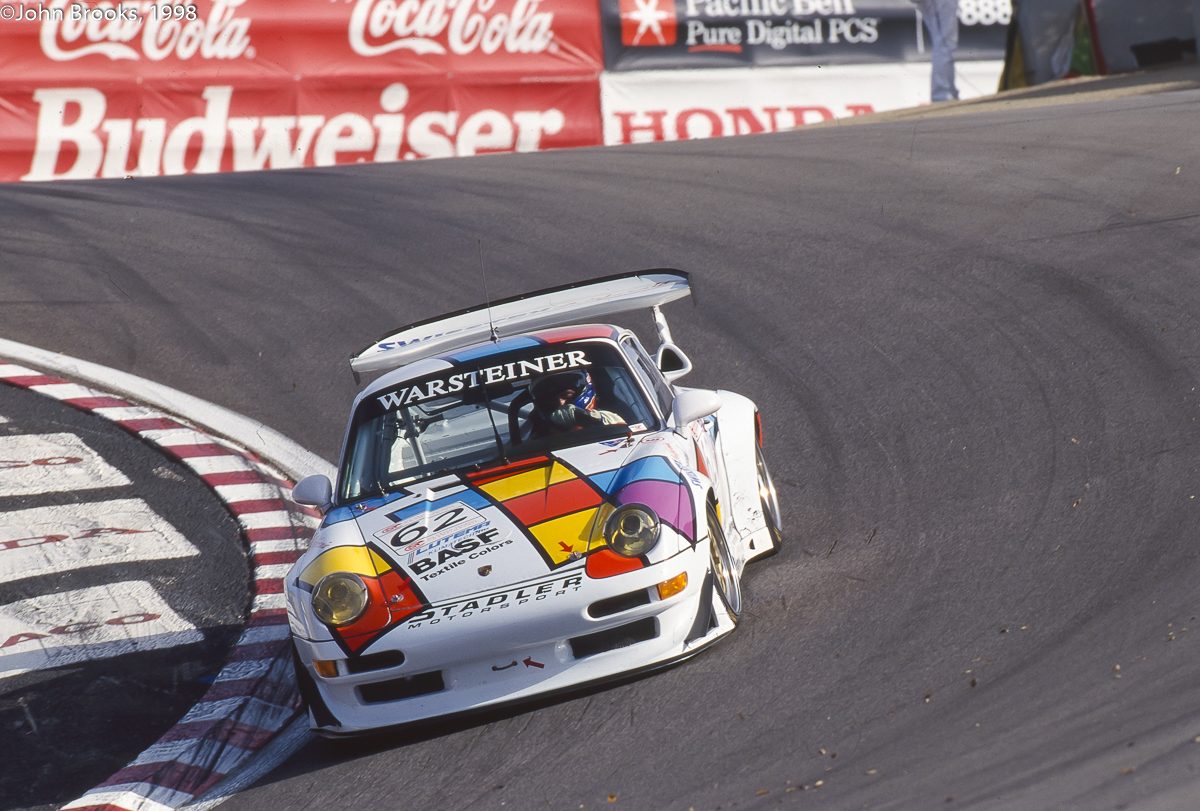 Ludwig had his own dramas to contend with while negotiating his way through the traffic. William Langhorne in the Stadler GT2 Porsche was having a spirited contest with Michel Neugarten in his Elf Haberthur example, swapping positions round the sweeping track. The American was fully concentrating on the car in front so did not see Ludwig dive underneath him at Turn Three. The result was a heavy side impact that nearly put Klaus off the tarmac but somehow, he gathered himself together and raced on at full speed. Langhorne crashed out the following lap at the Corkscrew, something broke he maintained. 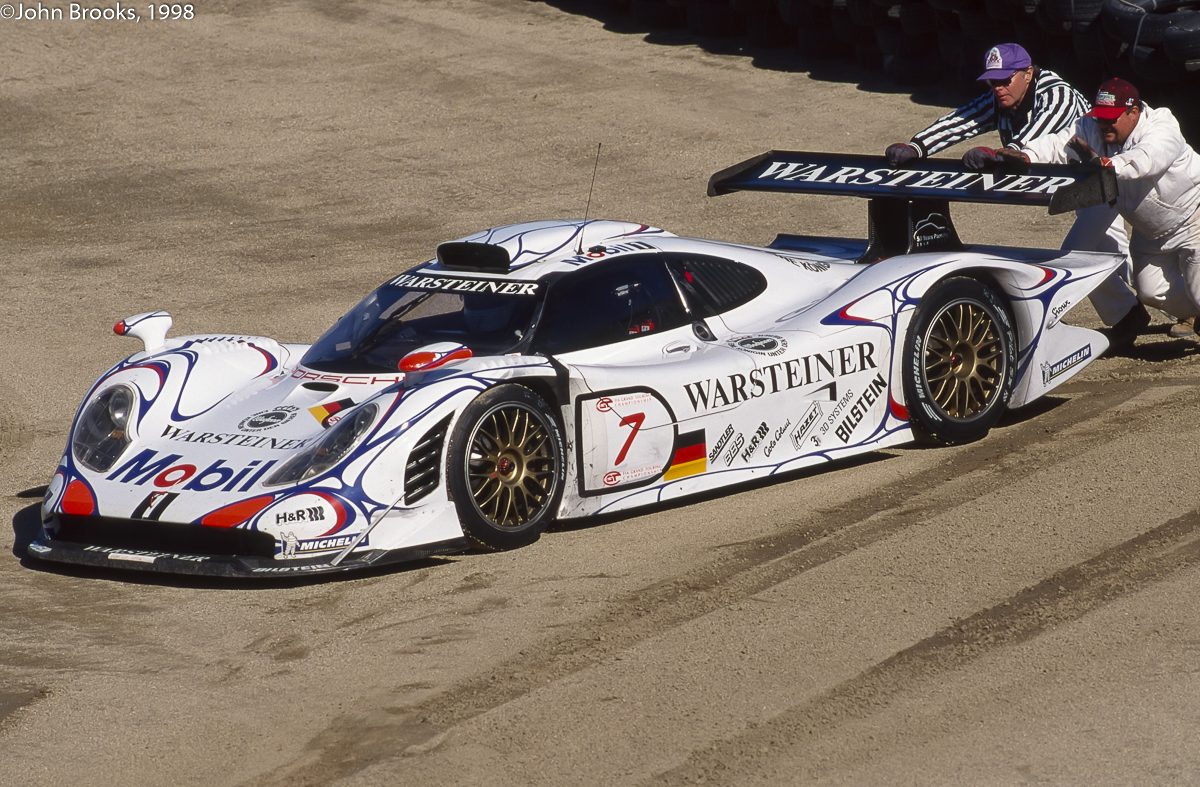 Schneider also got rid of the McNish problem around this point, the clutch failed on the Porsche stranding the Scot out on the far side of the circuit. It would be a straight fight for victory for the #1 and #2 Mercedes. Schneider then dived into the pits, fuel only, no fresh Bridgestones. 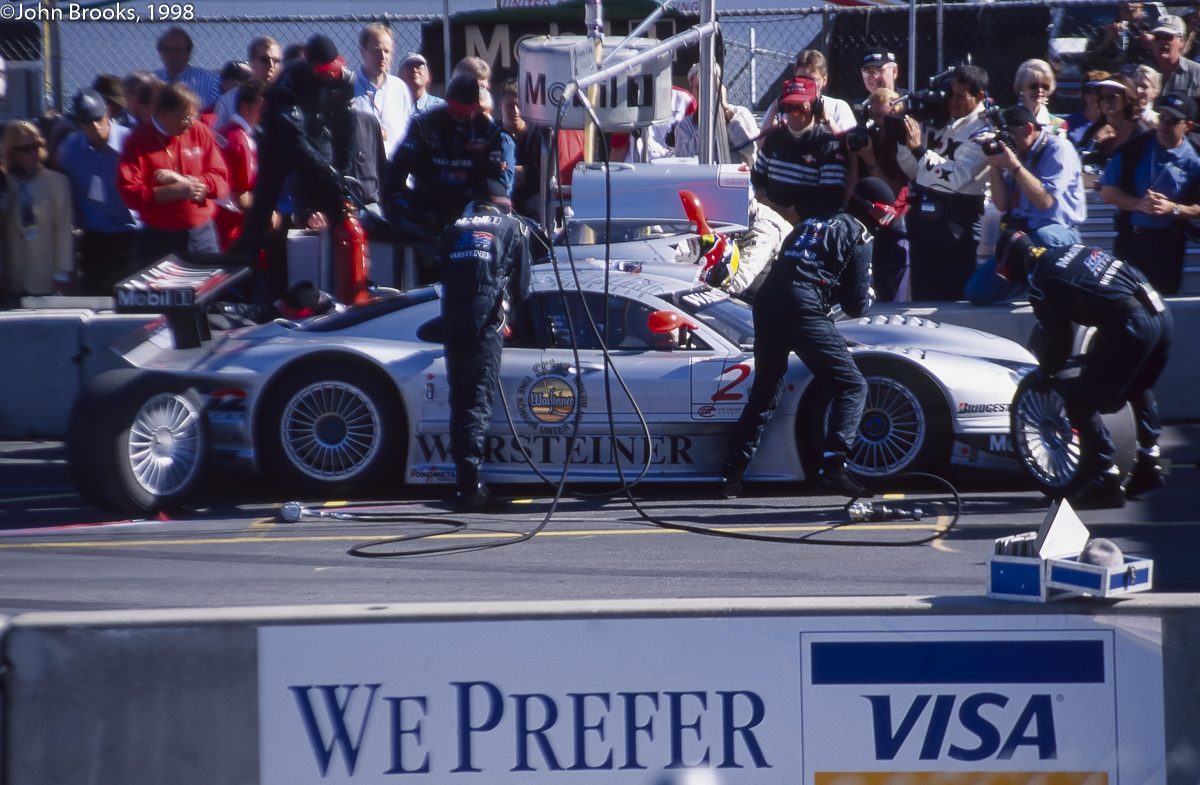 A lap later Ludwig was in, then out of the car, Zonta taking new rubber. He managed to stall the CLK-LM as he left the pits, all of which gave a handy advantage back to Schneider. 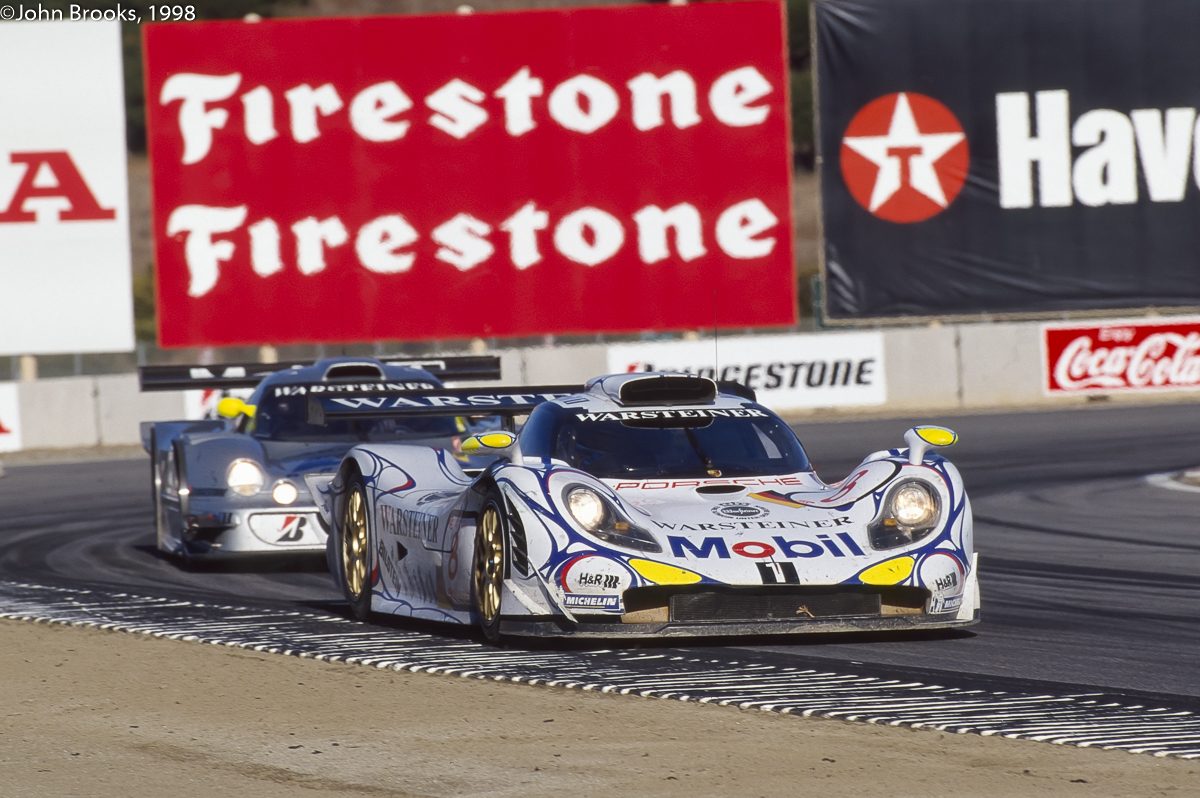 Bernd was looking certain to take the title but then lost a load of time stuck behind Jörg Müller in the other factory Porsche 911 GT1 98. Müller was determined to not go a lap down on the leader, hoping that the deployment of a Safety Car would give him the chance to catch up to the front. Eventually Müller ran wide at the first turn, allowing Schneider to pass, though he was furious at his fellow German. The gap was around the 12 second mark but this might not be enough to guarantee victory. 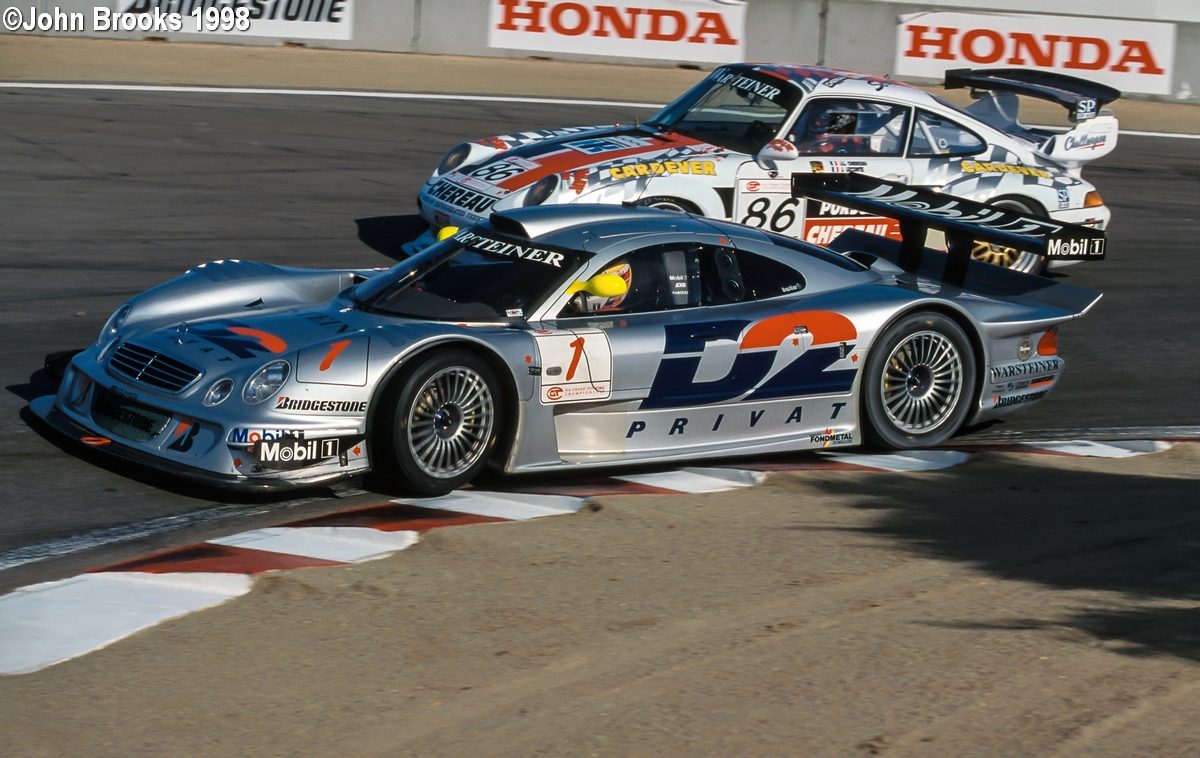 The second stints ended and into the pits came Schneider to hand over to his Aussie co-driver who also received a new set of tyres. This would put Webber behind Zonta on the road as it was expected that his stop would be a fuel only affair and so it proved. The AMG Mercedes management had anxious moments after both of their cars left the pits for the final time. Both fell off the track at Turn Three where oil had been deposited by a back marker, both cars just missed hitting the wall by a fraction, it could have been a disaster. 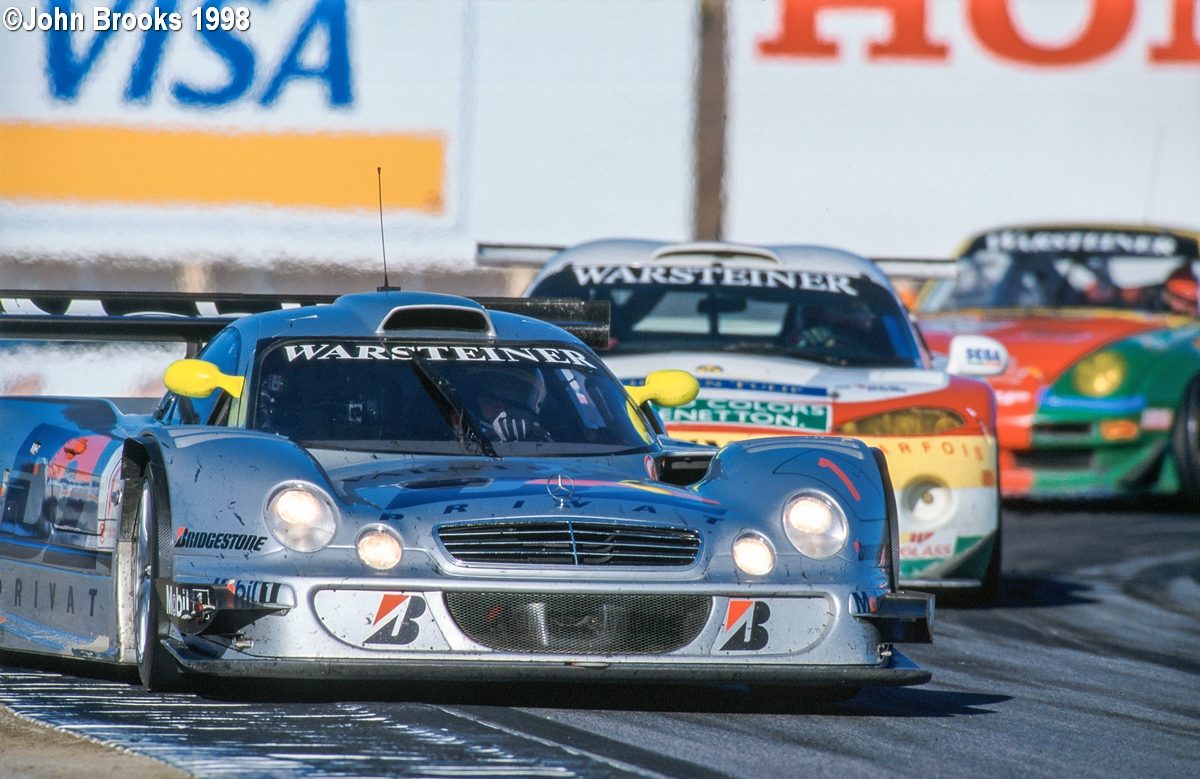 Zonta had a lead of 16 seconds but Webber got his head down and chipped away taking a second here, a second there. The #8 Porsche intervened again, this time it was Uwe Alzen’s turn to hold up the #1 Mercedes for a lap or two. Eventually Weber dived down the inside at the first turn and once again the was contact as the Porsche was muscled out of the way but he was through and the chase was back on. 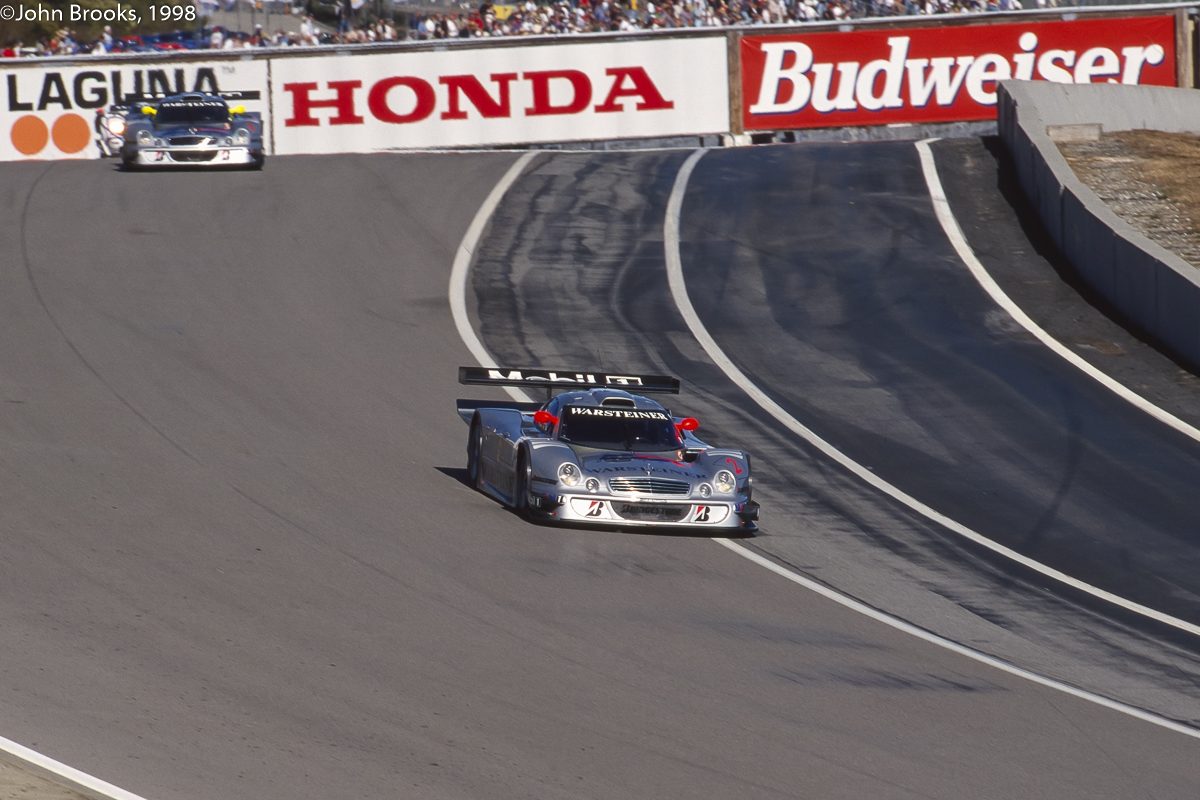 Webber posted a time of 1:19.094, setting a new GT record, would it be enough? The gap came down to ten seconds but the time ran out for the chasing Mercedes and Zonta crossed the line 10.8 seconds ahead – Ludwig and Zonta were Champions, the fairy tale had come true. 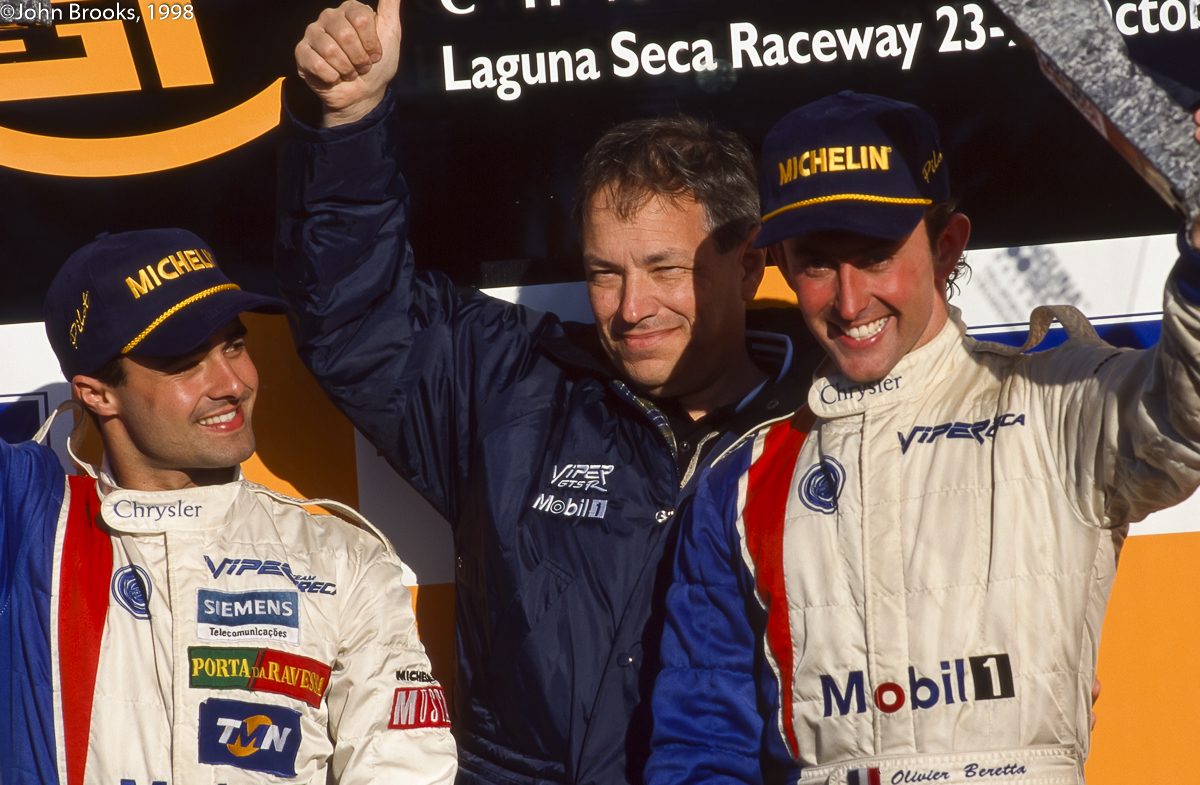 There was no fairy tale in GT2, in fact the whole affair was something of a damp squib. The race was a walk over for Beretta and Lamy, who scored their eight class win of the season, ending up over a lap in front of the second Roock Racing 911 GT2, driven by Bruno Eichmann and Mike Hezemans. The final spot on the podium want to another 911 GT2, driven by Michael Trunk and Bernhard Müller. 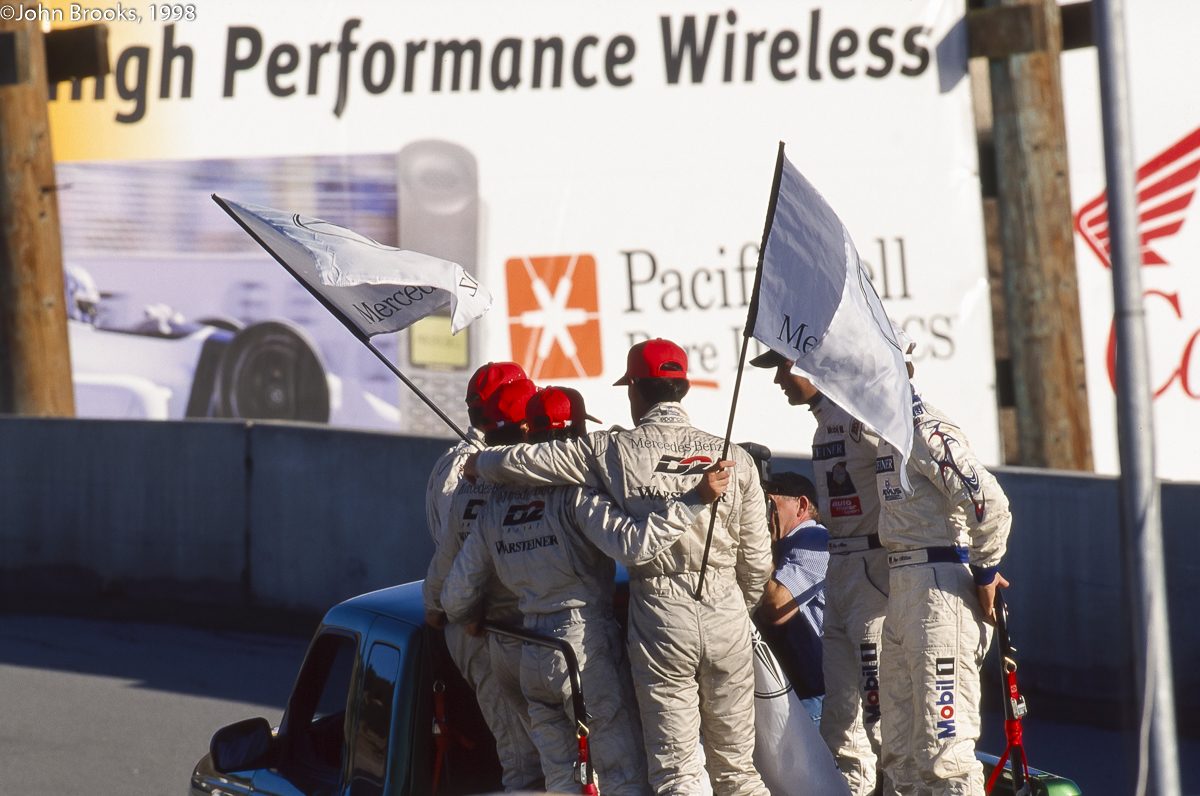 Schneider showed grace in defeat, he is, and always was, a class act. “Failing to win the title after 10 races by just 10 seconds shows how tough we raced for the Drivers’ Championship this season. Although Mark and I didn’t manage to win the Championship, I’m glad for the team. Congratulations to my old friend Klaus, who deserves to end his career as Champion.” 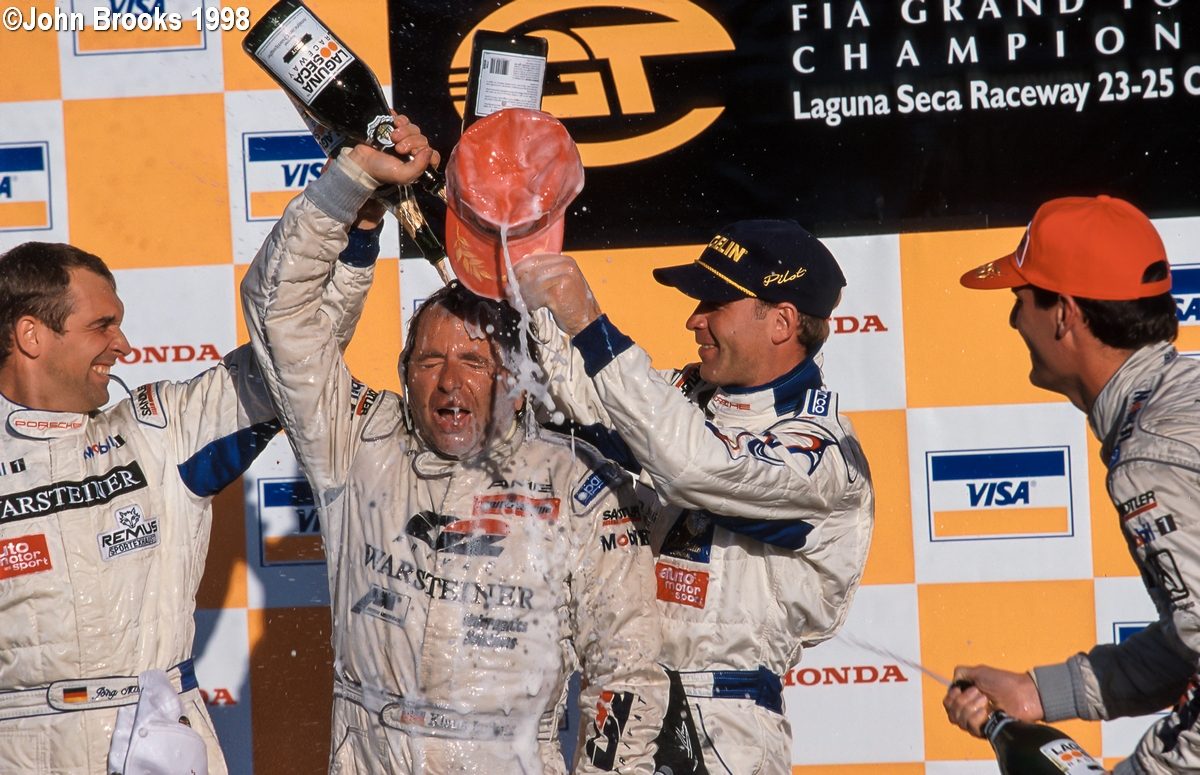 Mark later reflected on the result in his excellent autobiography ‘Aussie Grit’. “So, the end result was second place in the FIA GT Championship by a margin of eight points. My disappointment was tempered by happiness for Klaus, since that was his last year in racing, but I also felt it had been a little unfair on Bernd. His partner came from Formula Ford and F3, whereas Ricardo arrived as the new F3000 champion to partner Klaus and was already getting test drives in Formula 1. I could go toe-to-toe with them most times but sometimes I struggled, partly because it was Bernd’s car, basically, and he had it set up as he wanted it, and partly through sheer lack of experience.” 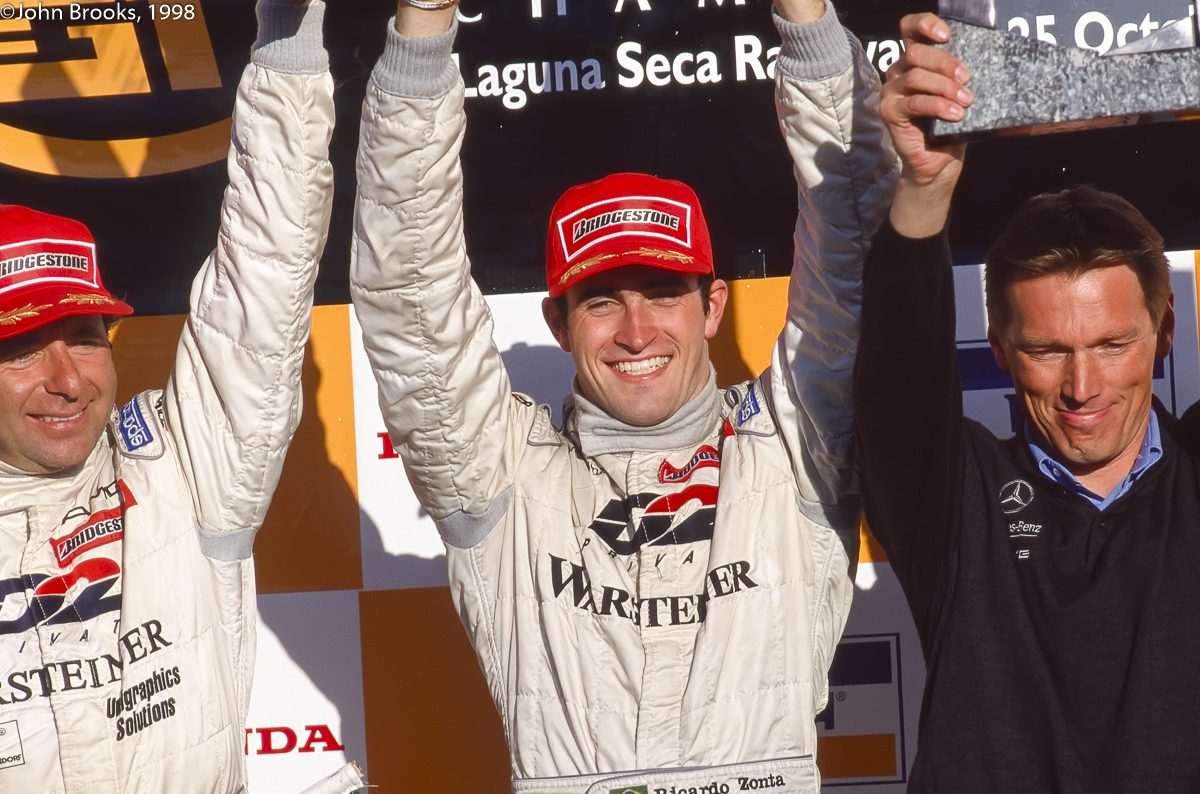 Zonta had this to say after the race.   “This was a real tough title fight. I had to give it my all to keep the gap to Mark Webber wide enough to make it. The fact that we both went off because of oil on the track shows how close to the limit we were. I’m really happy about the title and that I could win it together with Klaus.” 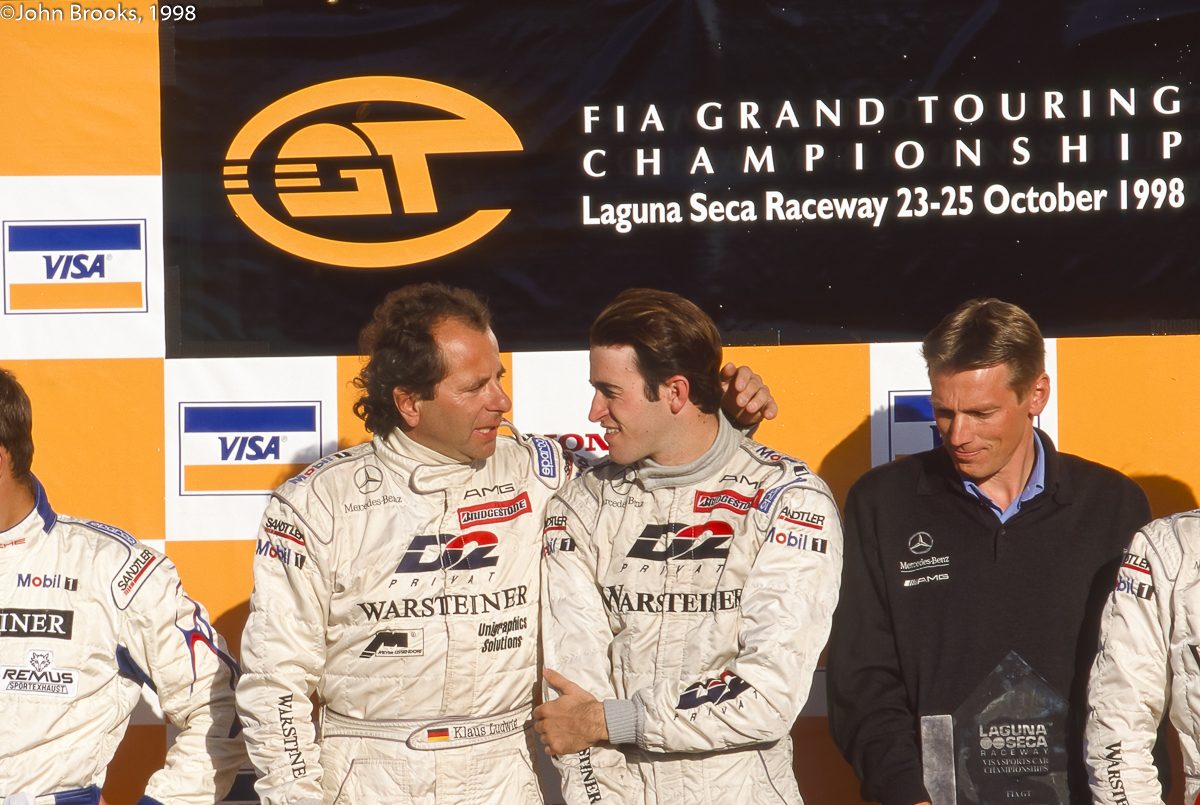 The retiring Champion had the last word. “I’m extremely happy about the Championship. This was a sensational achievement by the team, and my co-driver Ricardo is the best I could have asked for. I want to thank especially Norbert Haug and Hans Werner Aufrecht, who brought me back to AMG Mercedes.”

Of course, the old stager did not ride off into the sunset, the lure of motor racing proved too strong. In June 1999 Klaus scored a third win in the Nürburgring 24 Hours driving a Zakspeed Viper. In 2000 Ludwig raced a full season in the revived DTM, scoring a pair of wins at Sachsenring in his Mercedes. Now at the age of 50 he decided to retire as a professional driver. Then, being Klaus, he raced on for a few more years just for fun, notably finishing second overall in the 2006 Nürburgring 24 Hours. It was a helluva career………….