The Snetterton 300 represents the third phase in the circuit’s evolution. Originally of 2.7 miles, it veered off after Sear Corner to run alongside the main A11 London-Norwich road. At the end of this long, fast Norwich Straight the cars turned sharp right at the Norwich Hairpin and returned down the Home Straight which is now occupied by the Snetterton market. In 1965 the Russell Bend was introduced to slow the cars down before the start/finish area and this corner has undergone various configurations since.

In 1974 the Short Circuit was introduced, cutting out those fast “Norwich” sections and leaving the overall lap distance just 1.9 miles. Now in 2011 we have the Palmer developed infield section that brings the lap up to 2.99 miles.

Various prominent names have been chosen for the new corners while others have been re-named. Here we see the Williams right-hander which leads on to the back straight now called the Bentley Straight; notice the elevated bank for spectators which will soon be open for the public: 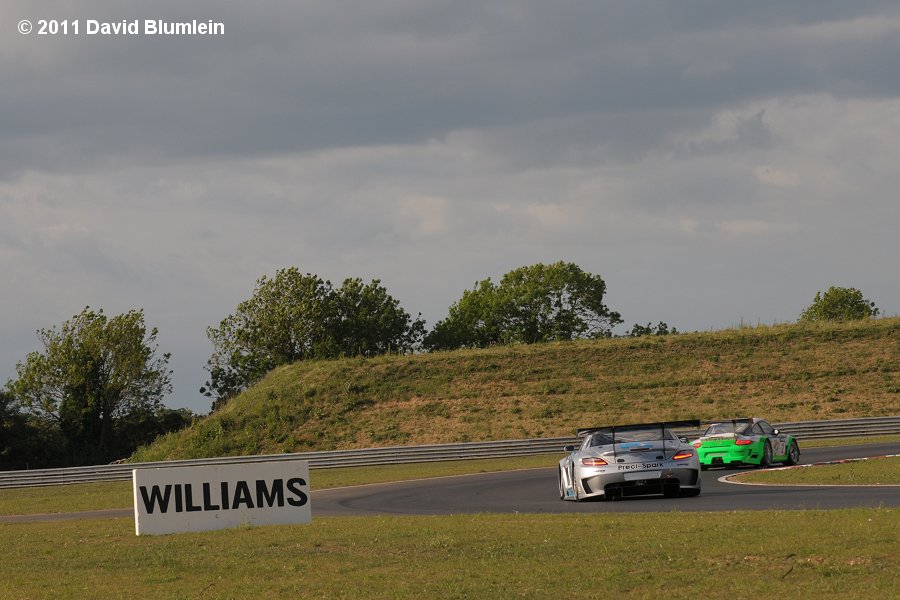 This is one of the GT4 Ginettas at Oggies which leads to the Williams corner with the Chevron GR8 in the background as it comes out of Agostini bend: The British GT Championship this year has a very interesting and varied entry, the best for many a season. Exciting newcomers include the Ferrari 458 Italias, the CRS car shown pulling away from the Montreal corner that used to be Sear corner: and the Mercédès SLS AMG GT3 which the Jones brothers are campaigning this year instead of their more usual Ascari in which they won the championship in 2009: 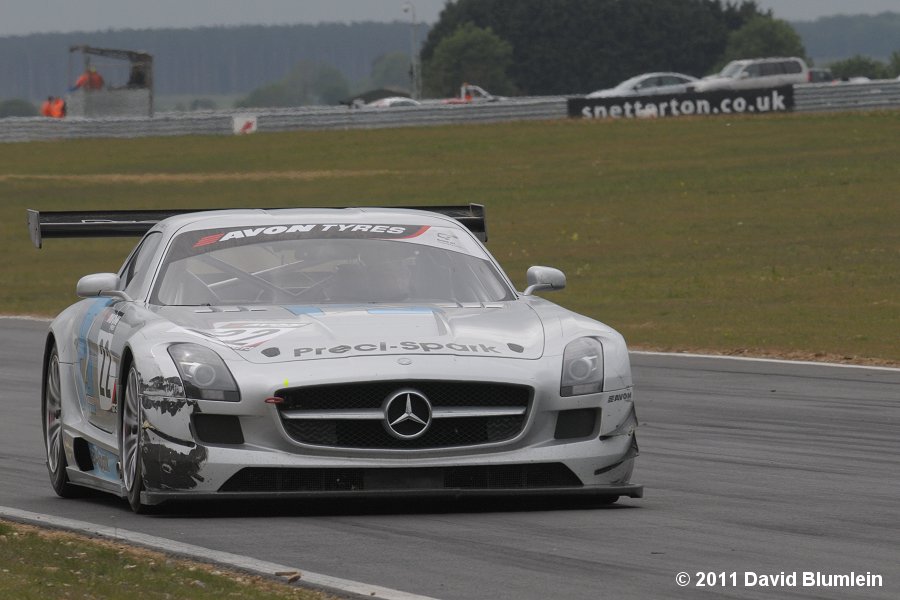 The car is seen braking hard for the left-hand turn at Agostini.

In the GT4 category are welcomed the two factory-backed Lotus Evoras, one of which is opposite-locking its way out of the former Russell Bend now re-named Murrays: 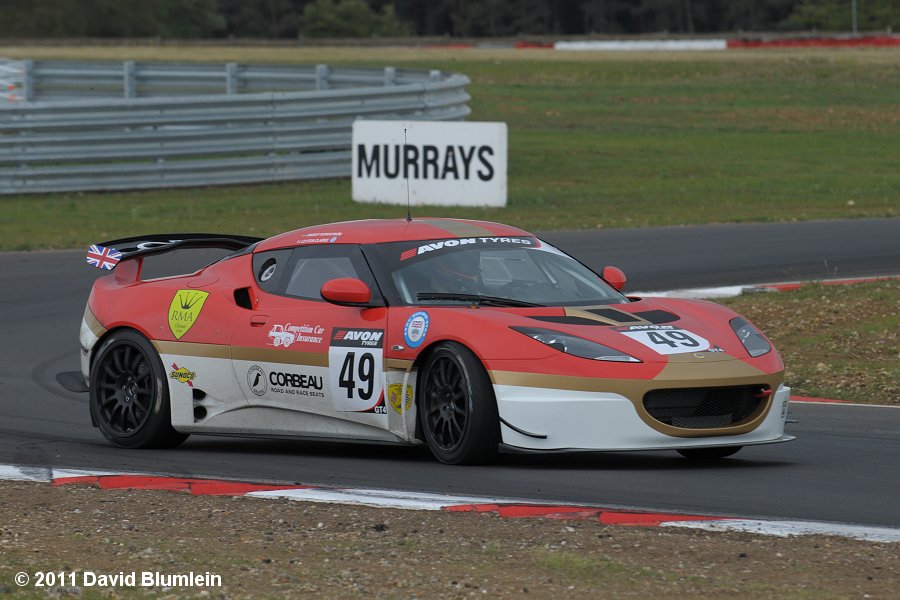 This is of course very much home territory for Lotus as their factory is just down the road at Hethel on the opposite side of the A11 from Wymondam, famous for its medieval Abbey: 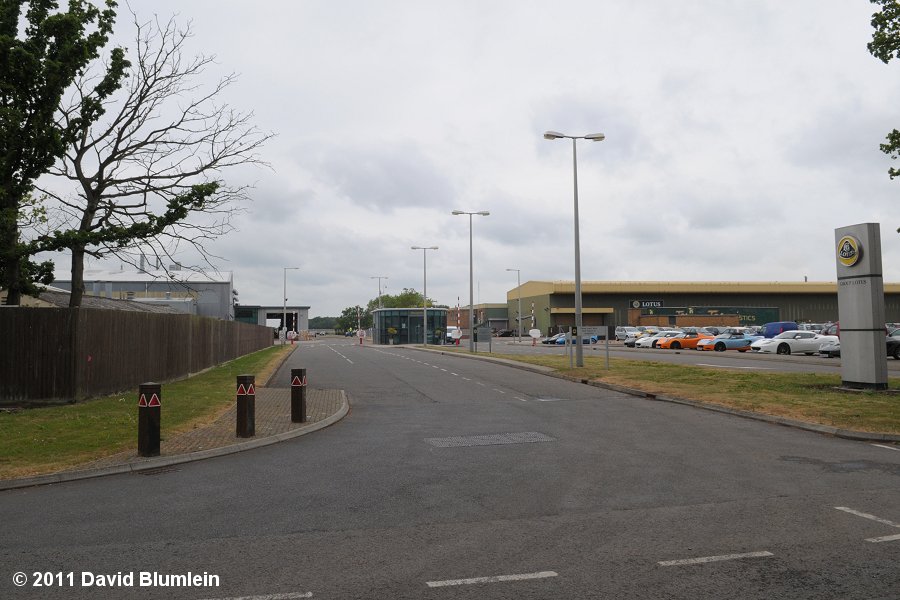 The DBRS9 Aston Martin still has life as shown by the unexpectedly large lead it established on the opening lap; the others are here struggling to keep up: 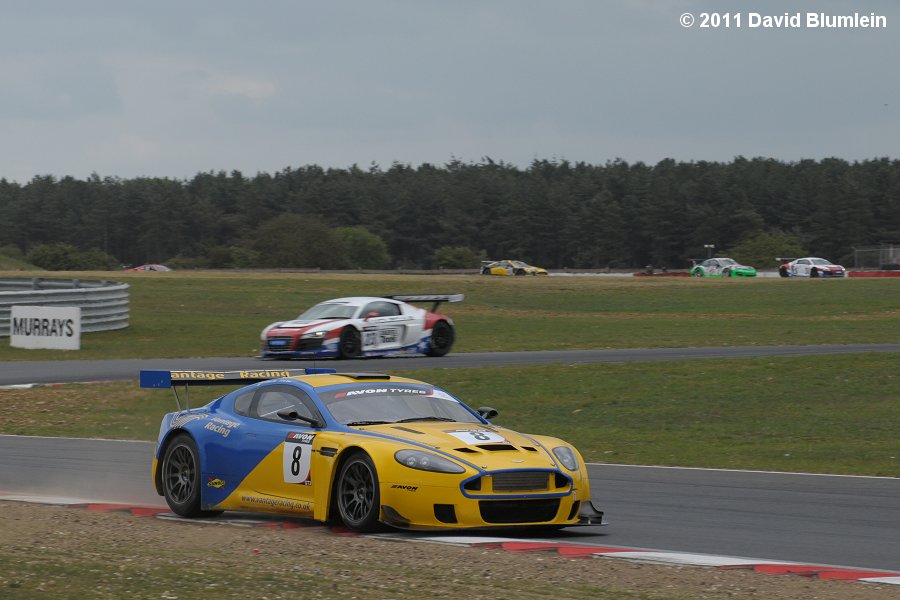 And here is the battle for GT4 honours: 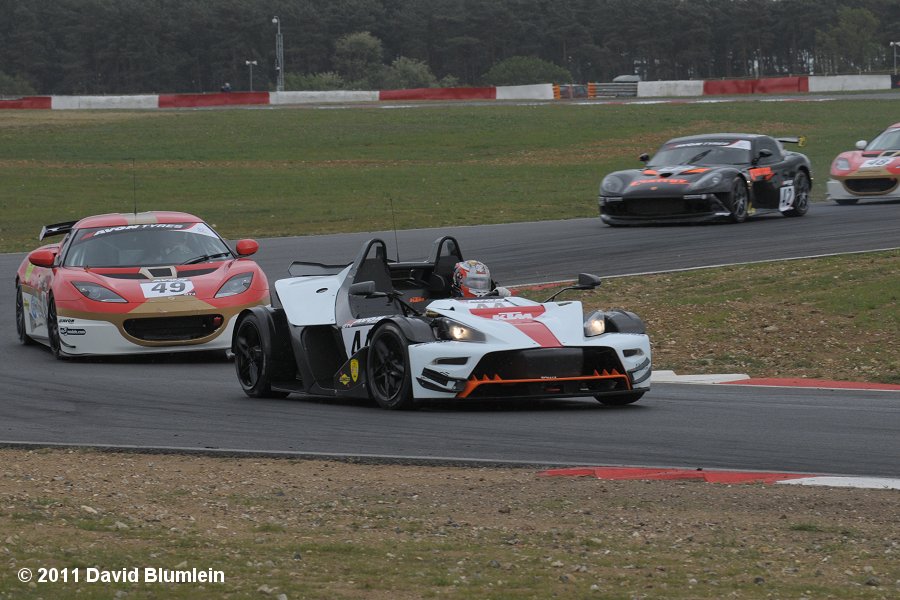 The KTM has become competitive and it is good to see an Austrian car doing well on the tracks – it’s been a long time since those Austro-Daimlers!

The Snetterton 300 is certainly a big improvement on the old Short Circuit and perhaps we shall see more endurance racing in the future; after all it was Snetterton which gave Britain its first full 24-Hour race (the Brooklands Double Twelve had to be run as two separate daytime races to avoid night-time noise restrictions) with the Willhire production car events held from 1980-1994.