Lee Self is one of the Elders of the Turn Ten tribe, that mythical assembly that convenes each March in Highlands County to worship at the Great 12 Hours. He is also one of the truly good guys and I can personally attest to him being a mean provider of concierge services. Lee dropped me a note earlier in the week describing his latest adventure and I can think of no finer way of kick-starting DDC back into life this winter than a tale from our favourite piece of Florida real estate. 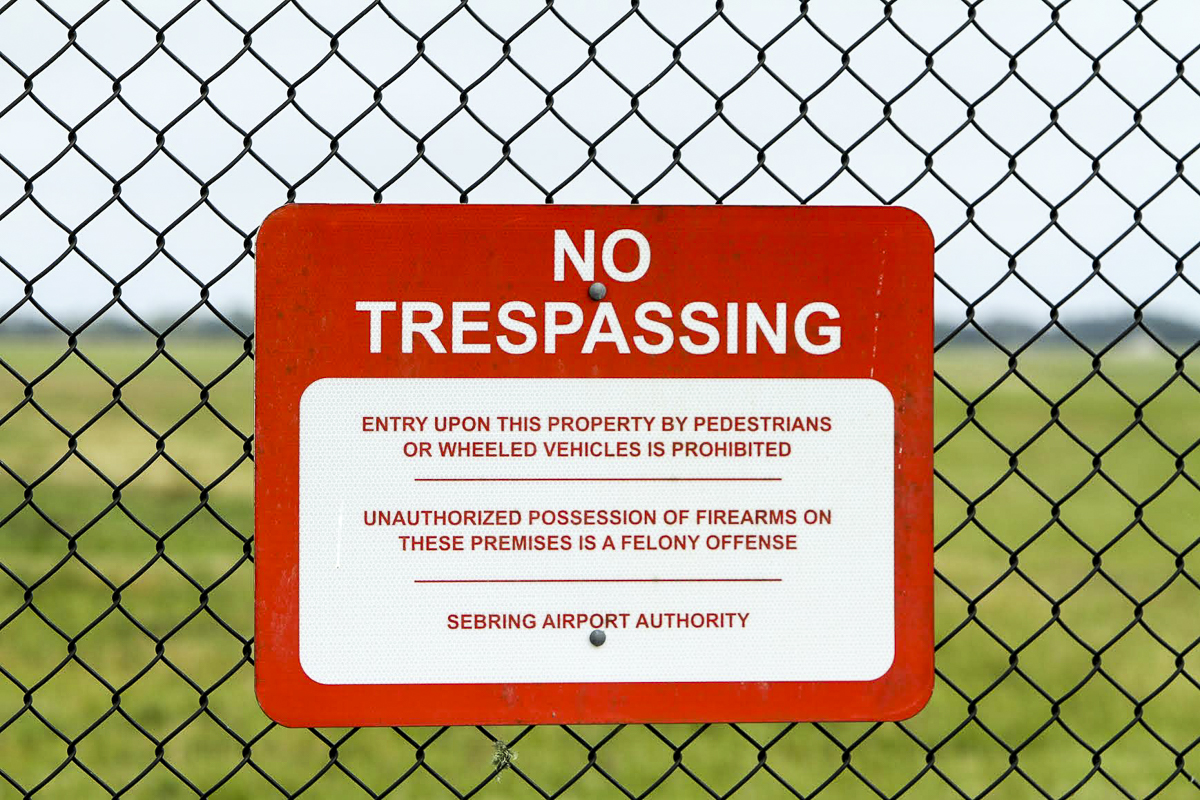 The Amazing Randy and I went to Sebring Saturday to the Sebring Vintage and Used Racer Festival. 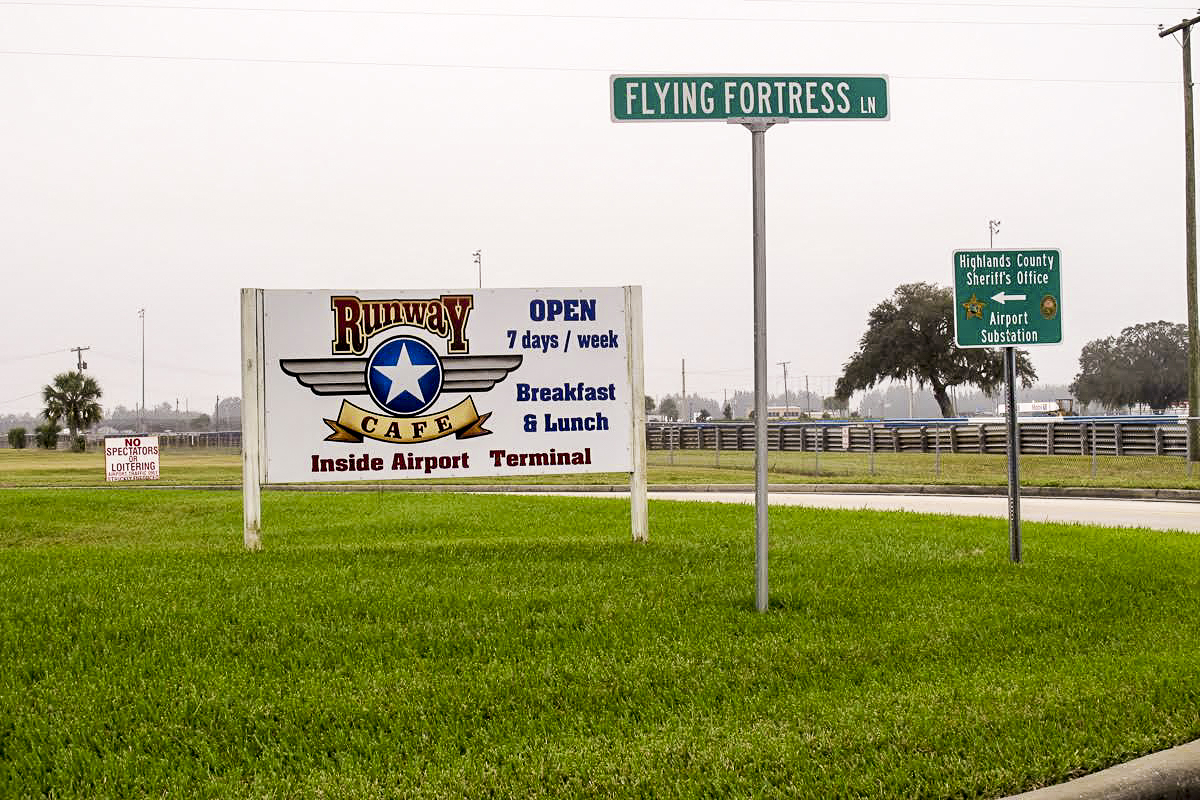 I went back over to the track early Monday morning, to see what I could see. Drove straight to the Airport and had a quick breakfast at the Runway Cafe. It was decorated with World War II Hendricks Field vintage photos……… 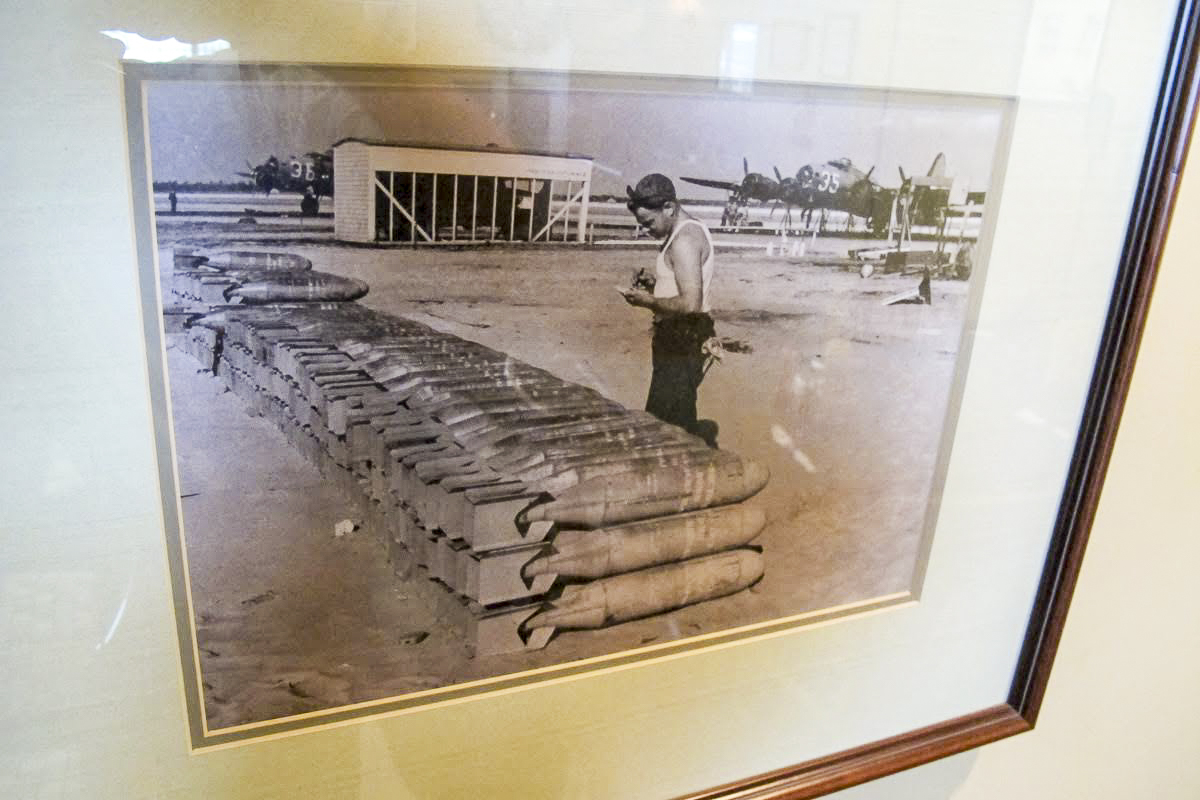 Did I mention it was Dec. 7th, Pearl Harbor Day here in the US? So I was right in the Period, very cool and most appropriate. 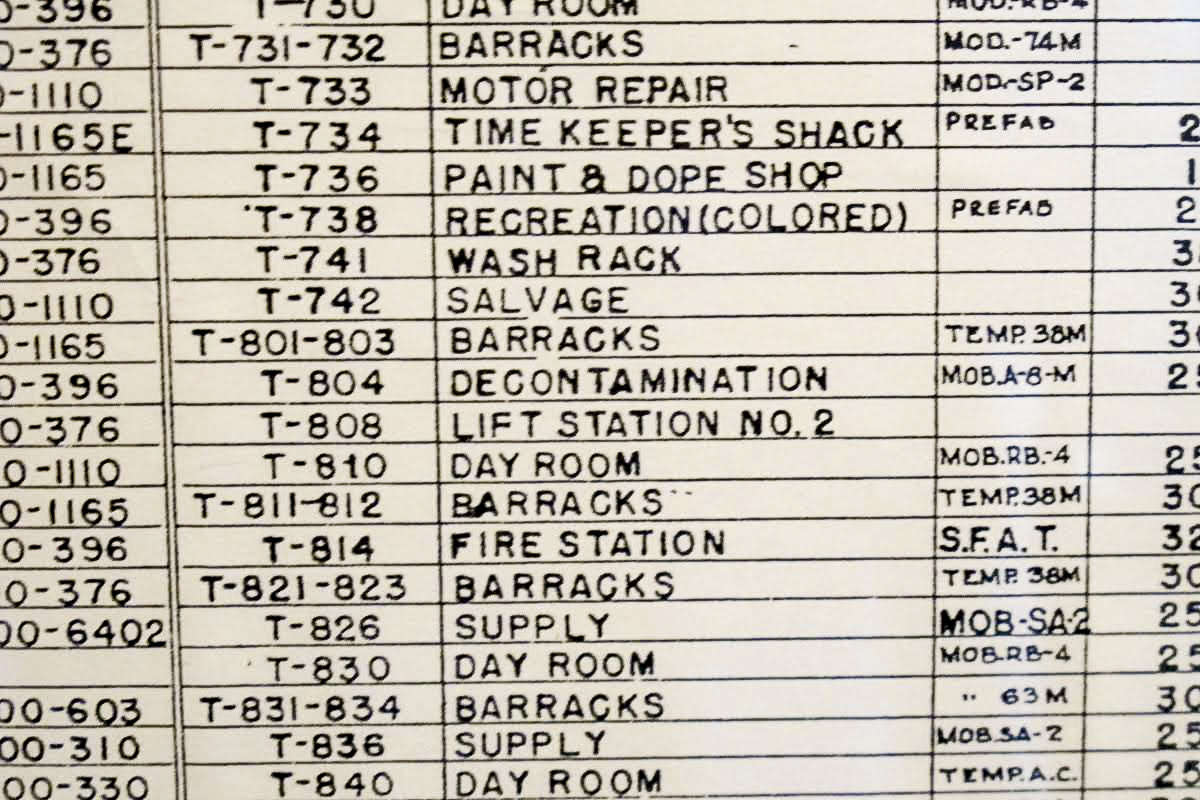 Went out to my car, got the little camera and shot some of the inside decor.

Walked back out to my car, really didn’t see anything, got back in the car and drove over to the Hotel that Don Built, you know, Chateau Elan. 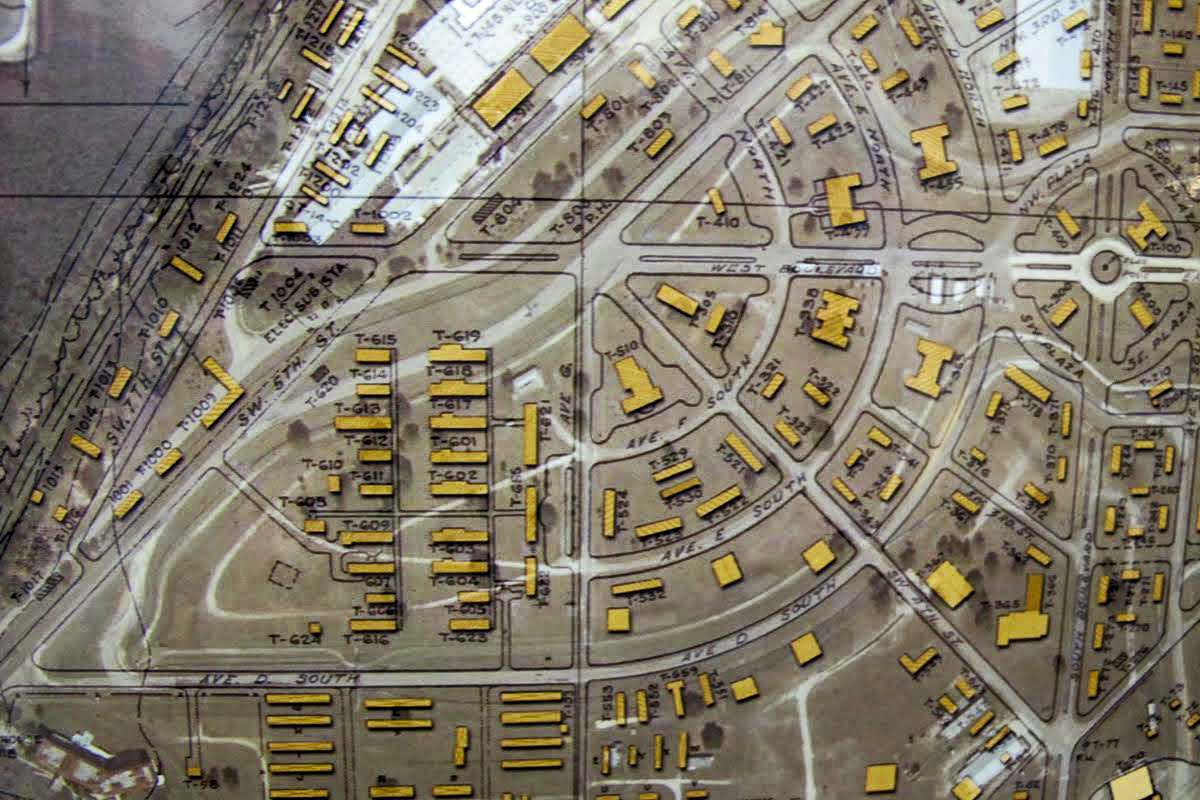 I parked, sat for a bit. walked on, then back out to the car to poke around at my camera gear, then down the side towards the track, easy to get to and nobody watching over the area. 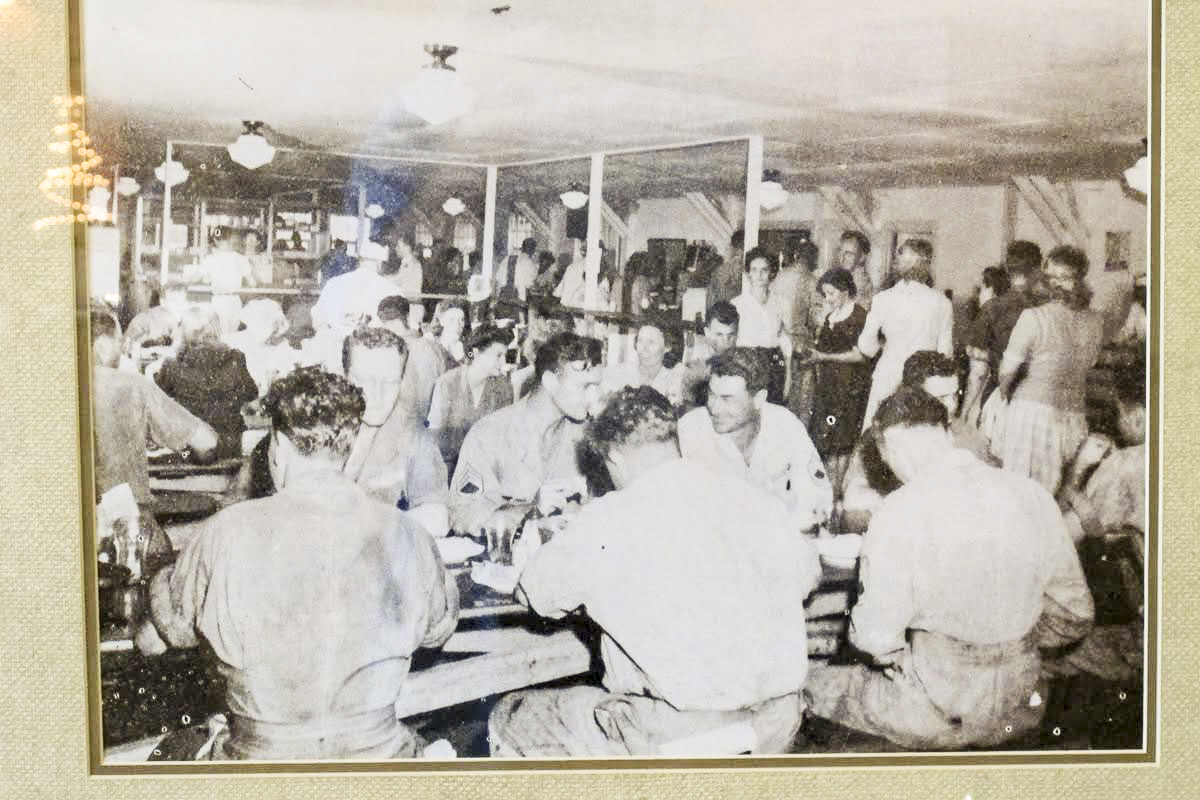 Then back to the car, drove around over to the Office/Gate. I asked if I could go in and look around. Got a stiff “NO!” 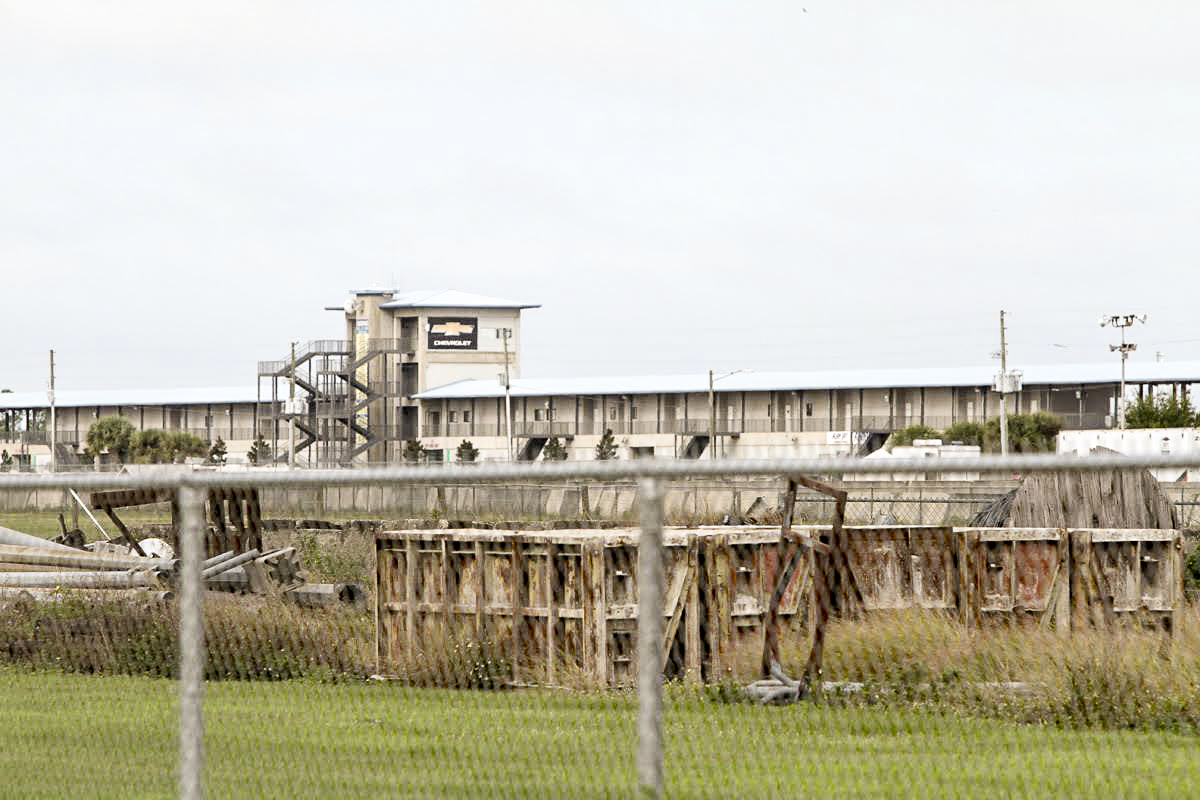 So I went back out to the main road, turned left towards the power building and down the outside where they park pre-race staging campers. Well, they’re building an Ice Cream Bar factory in that field, lots of trucks, workers and traffic, so off into the mess I went, ended up at the west most edge of the circuit/airport property at the end of the runway. 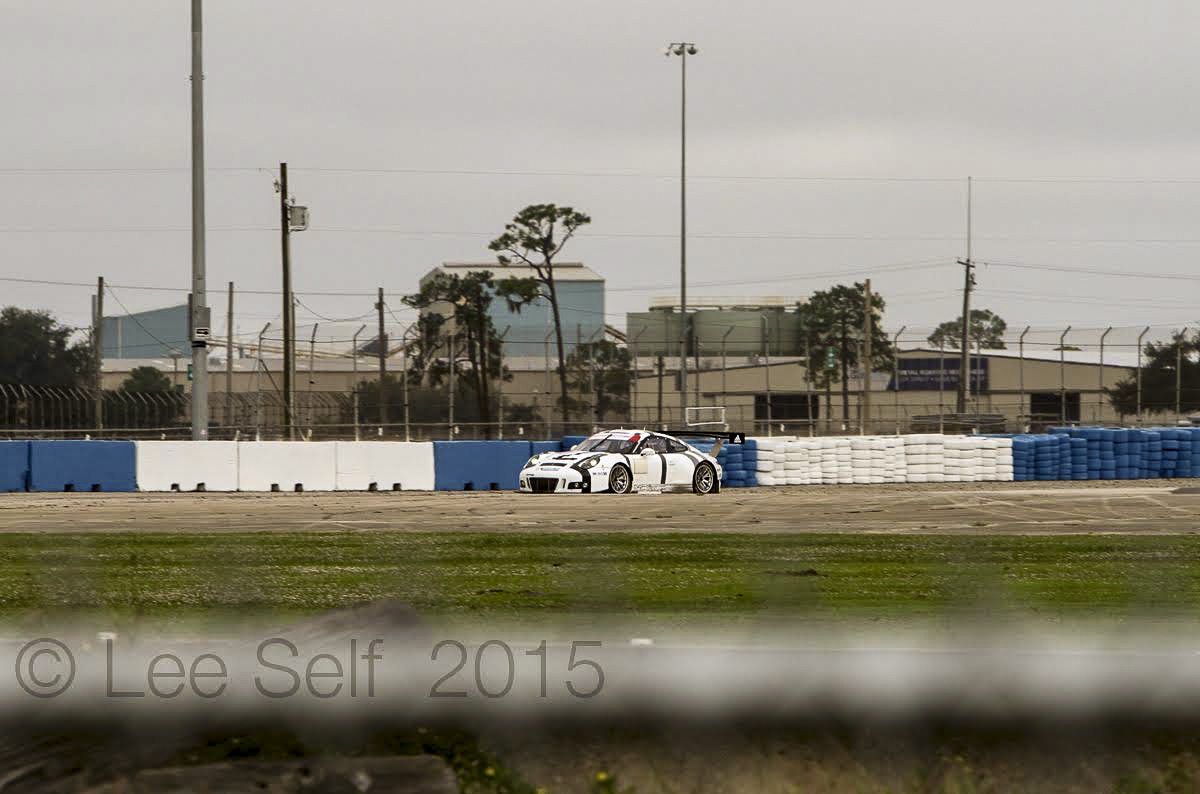 I could see the last turn before the long original straight down to T17, but just a bit of it, and at my max distance with a 200mm lens. Got some shots of the GTLM Porsche 911 turning laps, which he did on and off most of the day.

So anyway, I look to my right and see a Mexican fellow with a jeep looking down the runway, through the fence. He sees me taking shots, no problem. He said the airport called and said there was a cow and calf in the property, he was looking for it. 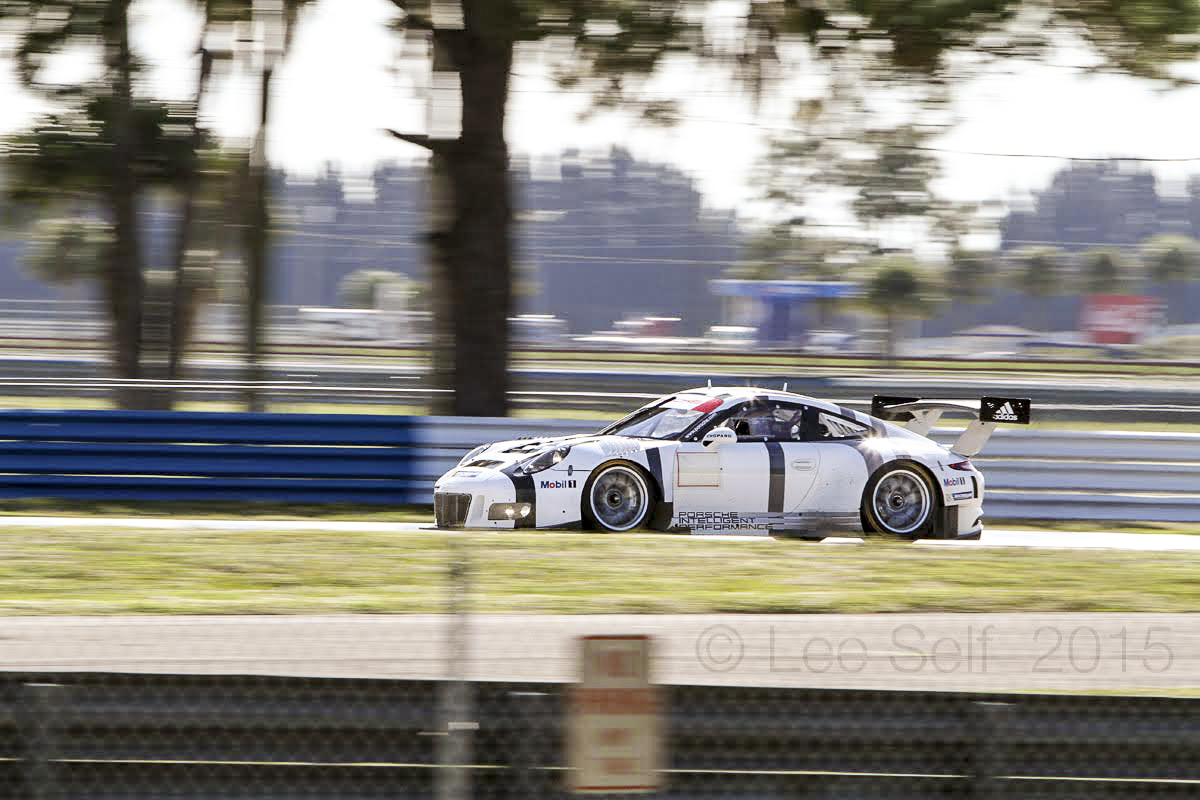 So enough from there. I drive back to the track entrance area, and just drive right past the gate, then the hairpin then and then zoom into the industrial park. Drove around in there a bit, to see where I could go, and what I might be able to see of the track… not much luck, but I did notice a perfect parking spot in the General Parking lot right as you enter the park (right where the chicane used to be) pulled up in there, parked and just watched for a while. noticed I could see the cars sweeping past from leaving the hairpin through Fangio Chicane and in places on the outside I’m high enough to see track clearly. 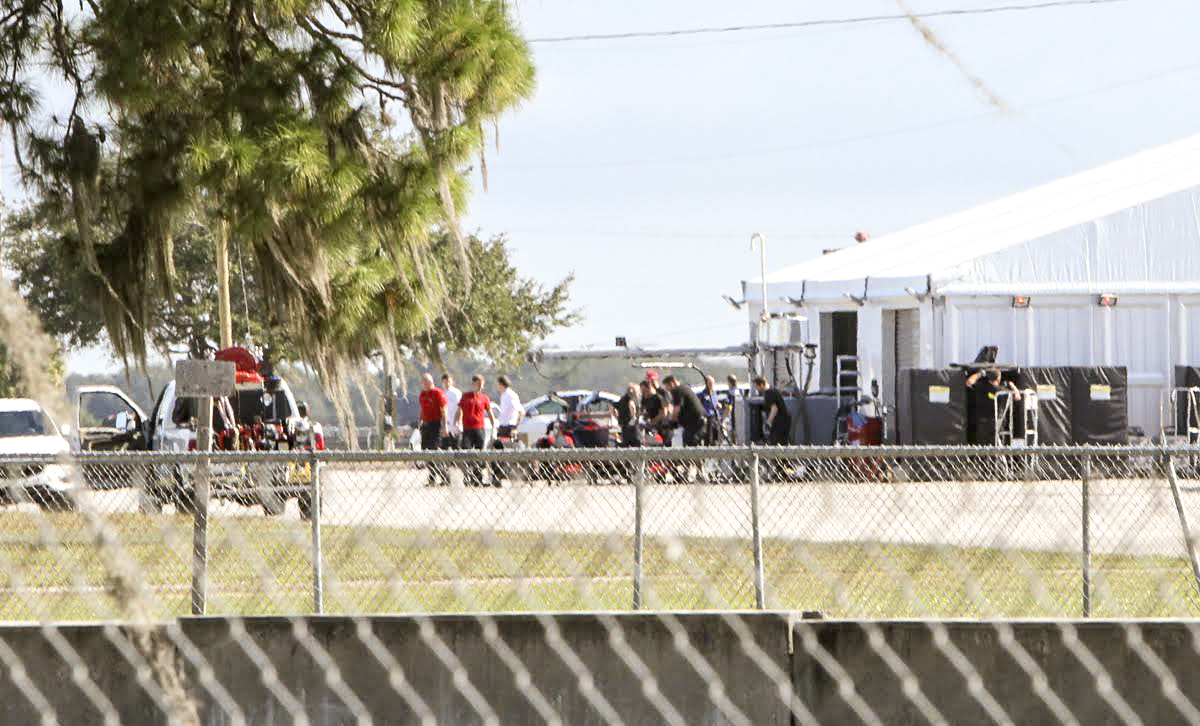 Maybe 45 minutes, maybe an hour goes by. I drive back over and park at the Airport / Runway Cafe parking lot, right where the cars exit Tower Turn. I have a clear view of the corner. I walk out by the road, and wait, the 911 keeps going by. Then I notice If I look straight ahead, due north I can see the Audi rig, set up next to the former Peugeot building. I can see the mechanics and engineers working around the car. 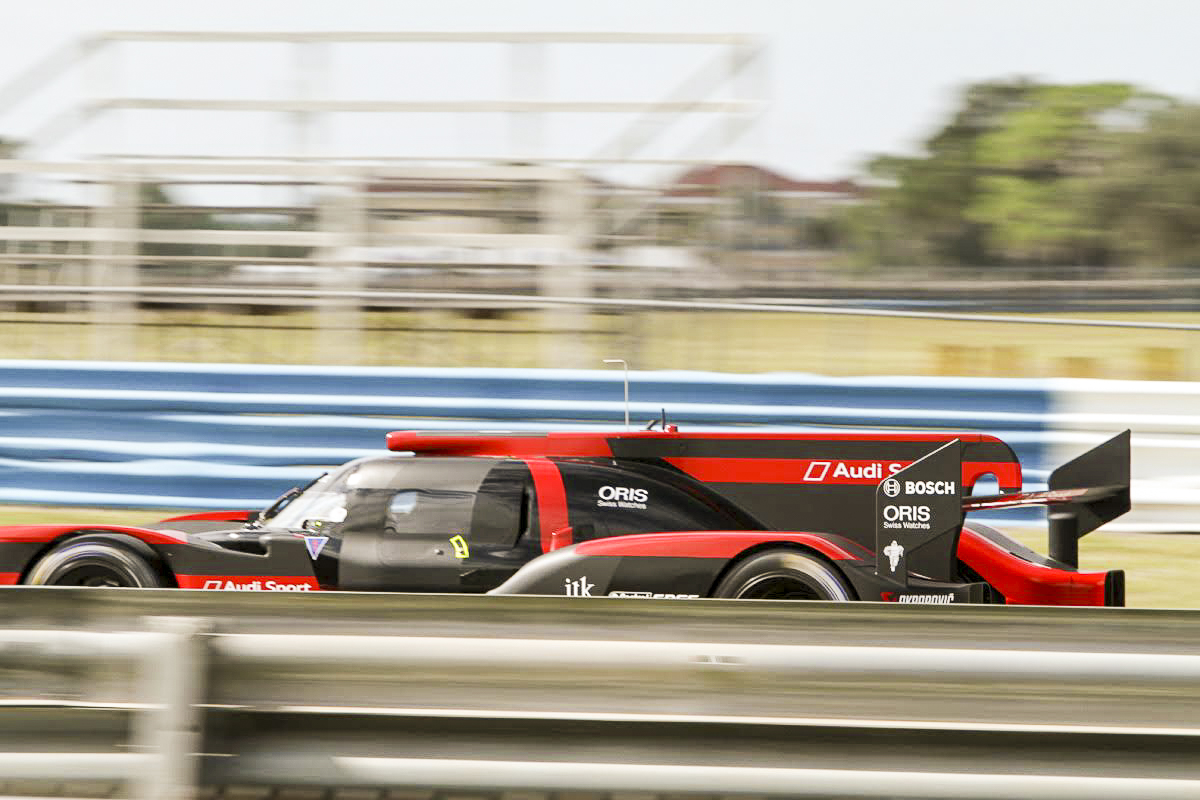 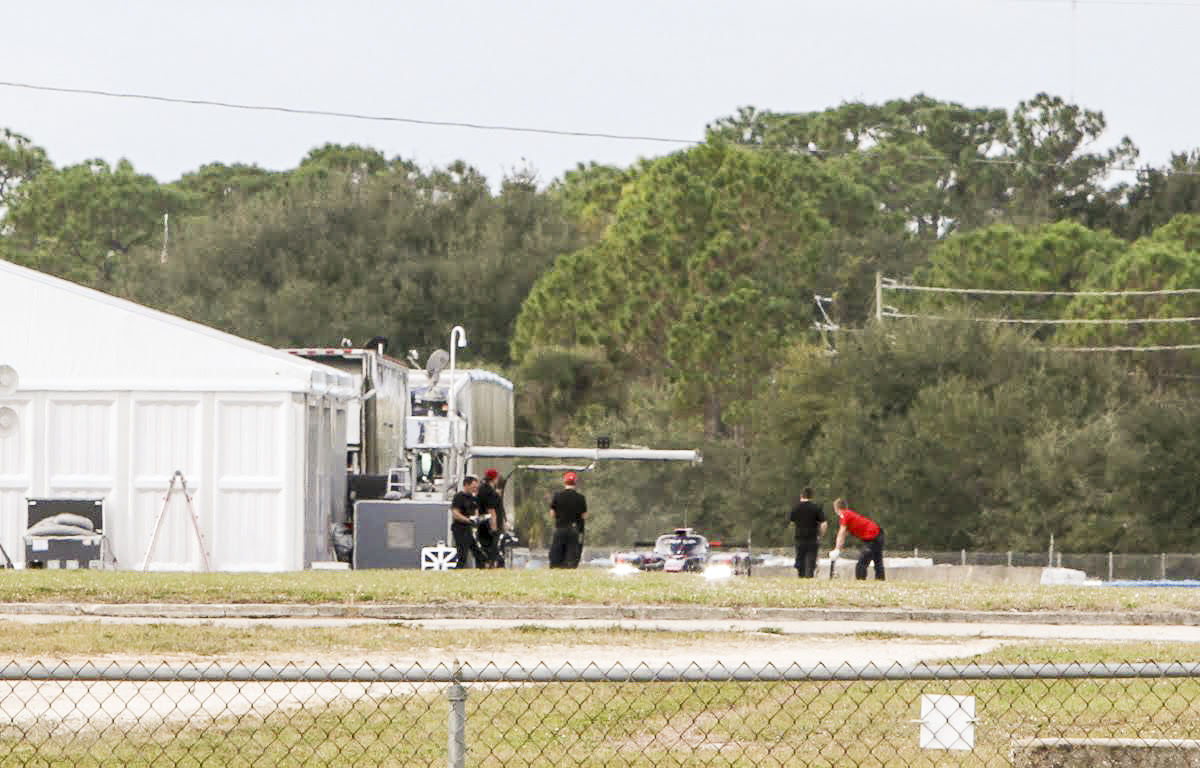 So I wait……and I wait…and I wait….. then I hear radios behind me, I don’t turn around. It’s the authorities. (Sebring Airport Authority)

‘What are you doing?’

‘Nobody.’ I said I was watching the Audi guys, that I made paintings of racing cars, and that I had the idea to do a Skunkworks-type image, and was watching to see what I could see. 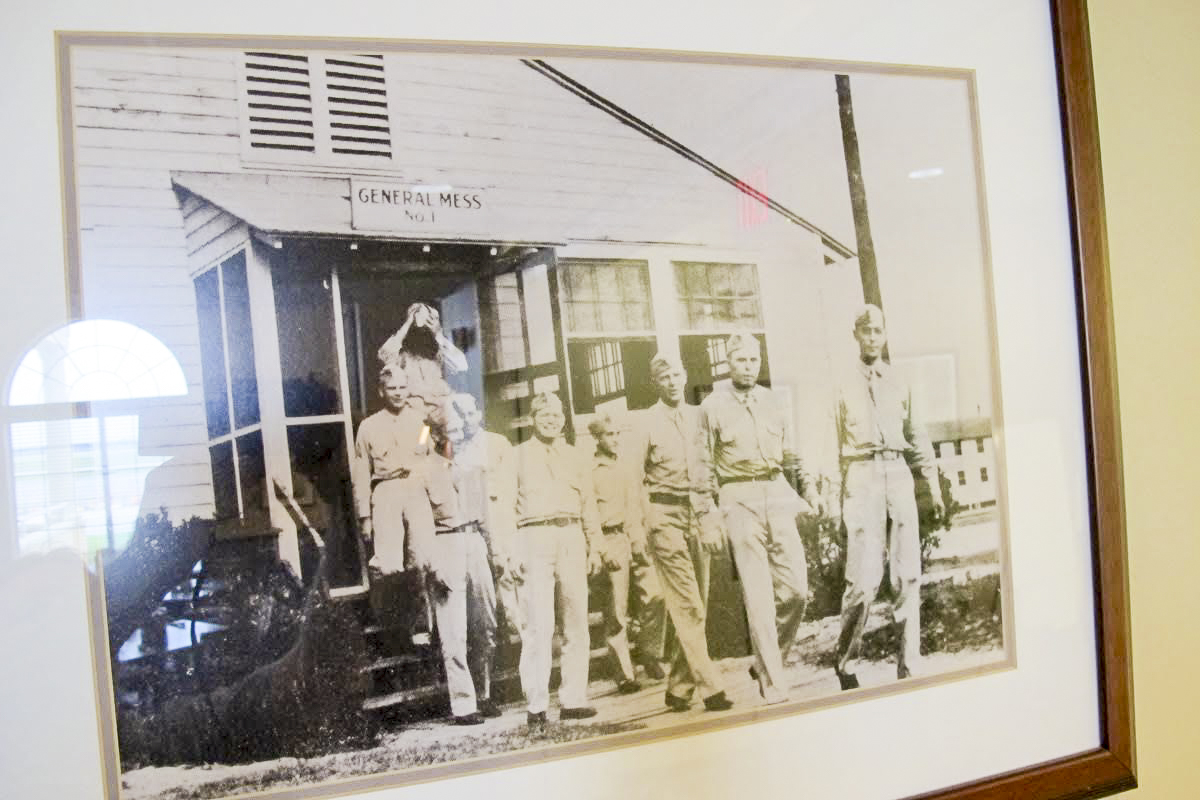 I had the camera in hand, my kit on my belt, I whipped out my business card, introduced myself. They were cool, I had a Turn 10 hat on, he asked if I was with their crew?

‘Yep, I make the hats and stickers’ I said.

So it turns out his name is Ricardo, and he is best buds with Sammy who is Lola’s husband and the names keep coming………… but the best part is I know all of the folks he’s talking about. 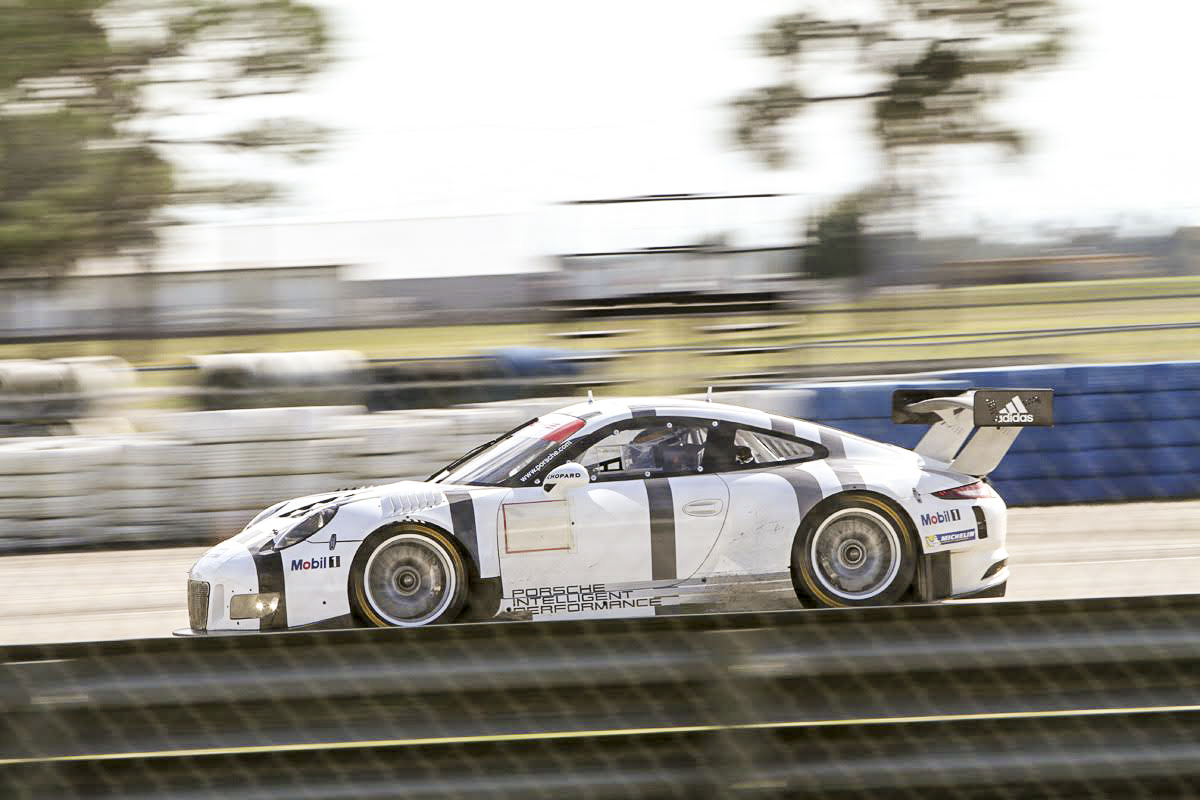 He says, ‘Ok, shoot away, just don’t go across the perimeter road.’

‘No problem, the sensor will do the work.’ I said I was gonna stick around, walk the perimeter road up to the hairpin and back. He said no problem. So that’s what I did for the next two hours. Got Audis, Got Porsches. Even saw the security guy giving me the eye on one of his passes and got a nice wave in return. 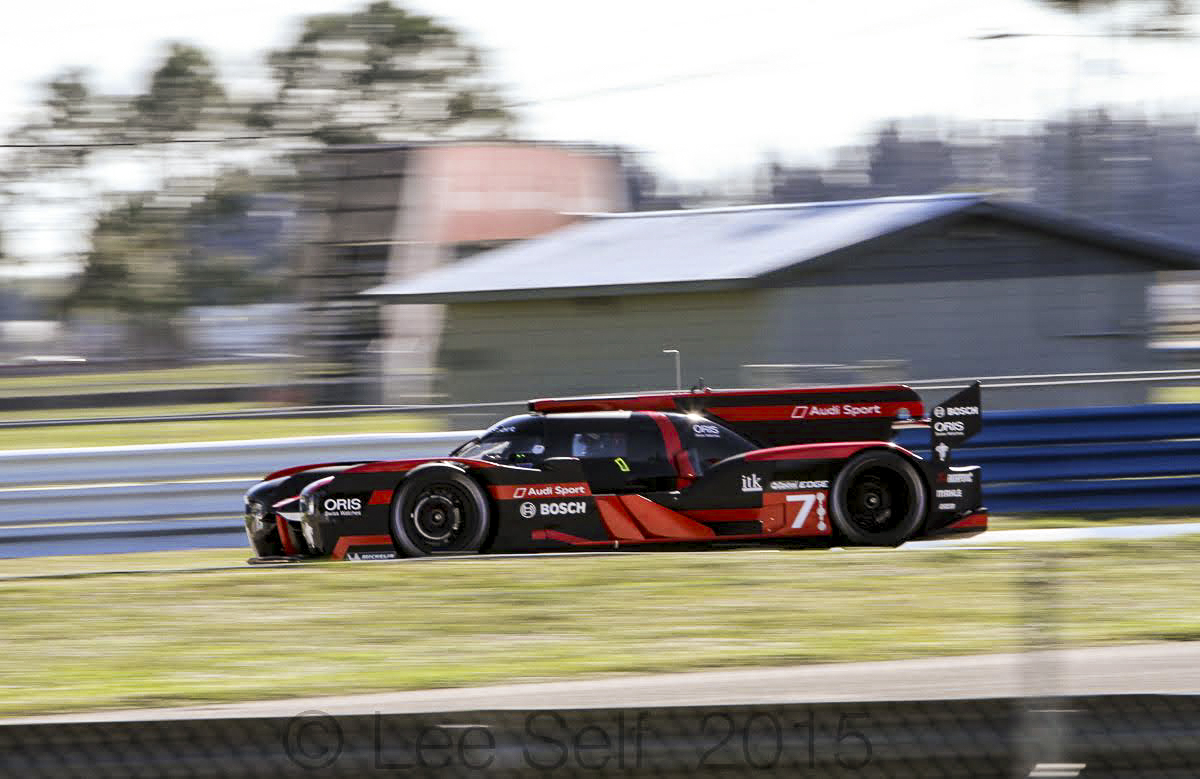 Eventually I head back to the car, so I drive back to Chateau Elan and order some lunch. Watch for the Audi through the window. then took my Iced Tea and sat on the back porch, by the pool for at least half an hour. The didn’t come back out by 4:00pm, and I was done, If you saw the Audi test video on FaceBook it was shot from right there on Hotel grounds. 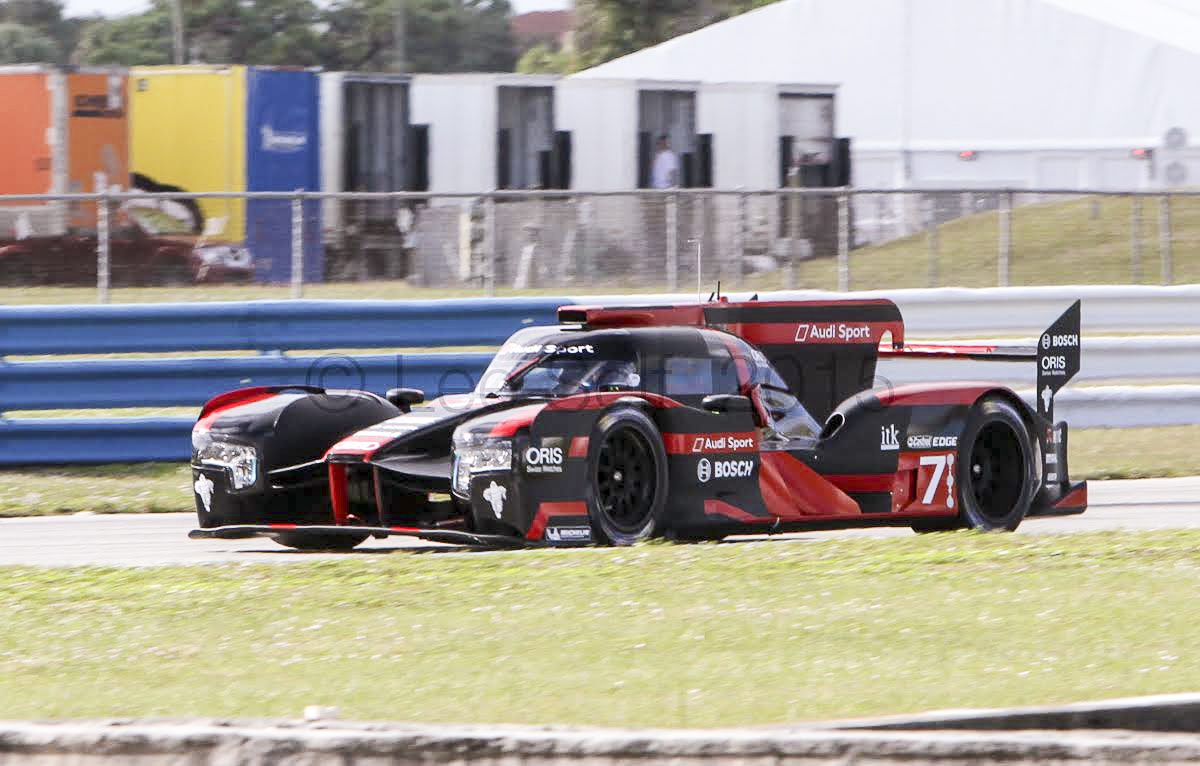 It was nice shooting, never on Raceway property, working all the angles, just for fun, but serious fun, y’know.

Lee Self, December 2015 – images copyright and courtesy of the author

4 thoughts on “View from the Perimeter”