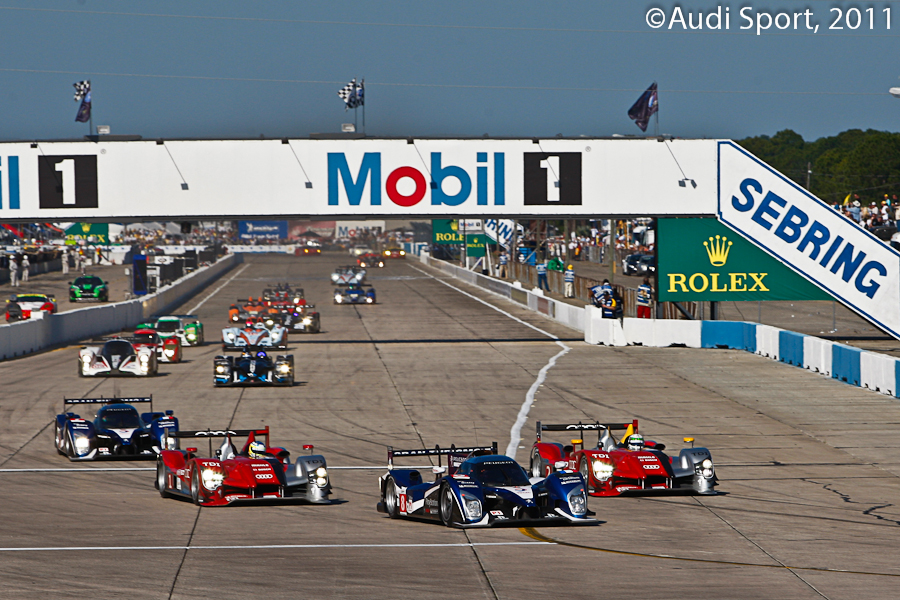 Rock Around The Clock

The ever increasing speeds of the diesel battle meant that the ACO felt forced to bring new rules in for 2011. Smaller engines and other measures in turn meant new cars for Audi and Peugeot. Peugeot had their new weapons ready for the opening ILMC round at Sebring, Audi did not. At The Setting Of The Sun

The Peugeot 908 is powered by a 3.7 V8 twin turbo diesel engine. The new regulations caused the loss of around 150hp and more importantly torque was massively reduced, so a completely new approach was needed. The Peugeot may have shared its model number and the windscreen wiper with its predecessor but nothing else. The aerodynamics concentrated on maximising the speed at the expense of downforce. This aspect combined with the lack of torque meant a completely new technique to driving the cars flat out was also required. Keeping up the momentum was paramount and this accounts for the extremely aggressive moves that the prototypes have pulled when in slower traffic……..universally this has not been well received, especially by the professionals in the GTE class. Another major change was the mandatory addition of a central fin extending from the cockpit to the rear wing. The aim was to prevent cars getting airborne but that has not been wholly successful. Both Marc Gene and Nic Minassian had dramatic crashes in their new Peugeots during the pre-season test programme. Nic ended up on the runway at Le Castellet airport, having cleared the barriers and fences. These incidents attracted the attentions of the FIA Technical department and further measures are now proposed. 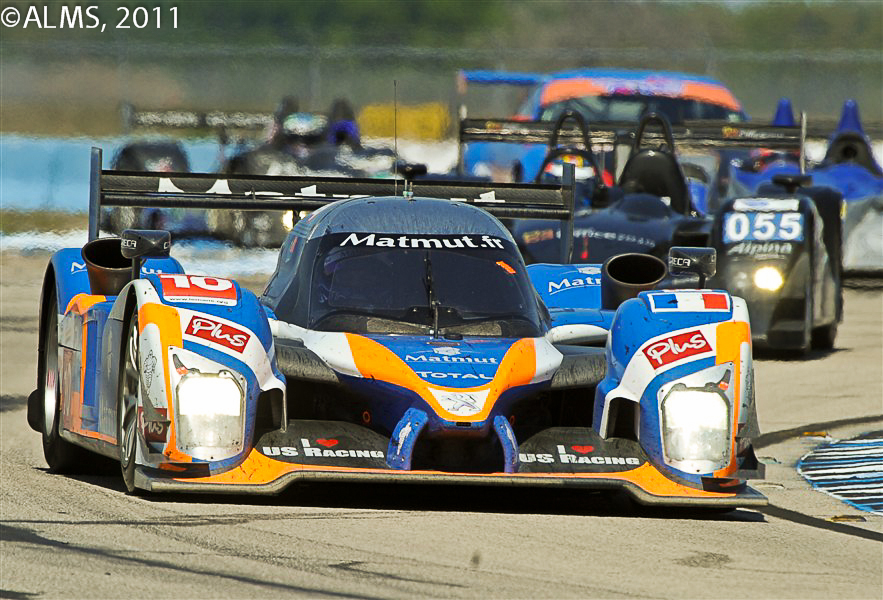 The new regulation that has been announced by the ACO mandates that there has to be an opening at the top of each wheel arch, replacing the existing louvers at the front. These openings measuring a minimum of 200mm by 250mm, will mean that the top surface of the tyres will be visible through the bodywork. It is intended to reduce lift in the event of a car spinning sideways by equalising the air pressure around the wheels. Audi were a few months behind Peugeot in the development of their own new car, so the R15+ was rolled out again at Sebring. While a team like Audi never gives up, their R15+ grand-fathered to conform with 2011 rules, were likely to struggle to match the outright pace of the French. The best hope lay in exploiting the considerable racecraft and Sebring Savvy that the team and drivers had accumulated over the years. In the end neither factory team stood on the top step, the 2010-spec Peugeot, run by the mighty ORECA outfit had a relatively trouble-free run and added Sebring to their list of Florida classics, having won the Daytona 24 Hours victory back in 2000.

Audi and Peugeot each lost a car from contention after a collision between Gene and Capello led to extended pit stops to fix the damage. Bodywork problems and a spin by Pedro Lamy dropped the other Peugeot while the second Audi had several punctures that stuffed their race. On a positive note the new 908s had run without mechanical problems on what is considered to be the toughest track of them all. Next up would be Spa and the début of the R18. It was going to be even more serious now. The Audi R18 was certainly dramatic when seen in the flesh at Francorchamps. It was the first coupé from Audi since the distinctly undercooked R8C in 1999. Powered by a V6 3.7 litre diesel running only one turbo in contrast the usual twin arrangement, it bristles with the latest technology, supporting the marketing message “Ultra”. The question was, would it work? Peugeot hit problems during Friday when Pedro Lamy crashed after contact with another car. Both teams are very secretive about their cars, at least to the media, so the damage to the 908 will have been compounded by the fact that every telephoto lens in a 50 mile radius was focussed on the wreck. It would be a long night for the mechanics. Qualifying was also a disaster for Peugeot, with the session being red-flagged early on, before the 908s could set representative times. Then the session was cancelled as barriers were damaged beyond swift repair. Audi lined up 1-2-3 whereas their opponents could only muster 13-18-50, Sacre Blue! The race got underway with the trio of Audis streaming up the Kemmel Straight in formation, then the day started to unravel for Ingolstadt. McNish spun into Les Combes, then Bernhard tagged a slower car, damaging the diffuser and Treluyer spun and got beached in the gravel at Fagnes. A long litany of similar minor problems afflicted the three Audis all the way through the race. The final result saw a 1-2 to the French with McNish/Kristensen/Capello salvaging a podium and some pride for Audi. The general consensus in that fount of false wisdom, the media centre, was that it was too close to call between the two factories. It was very difficult to draw firm conclusions about the prospects for Le Mans, a few weeks down the line.

It would be close, that much was certain, just how close we could not imagine.