The 2016 Rétromobile expanded to an additional upstairs hall, mainly occupied by the Artcurial Auction lots. The quality was outstanding, like a museum display and The Special Correspondent had a field day. 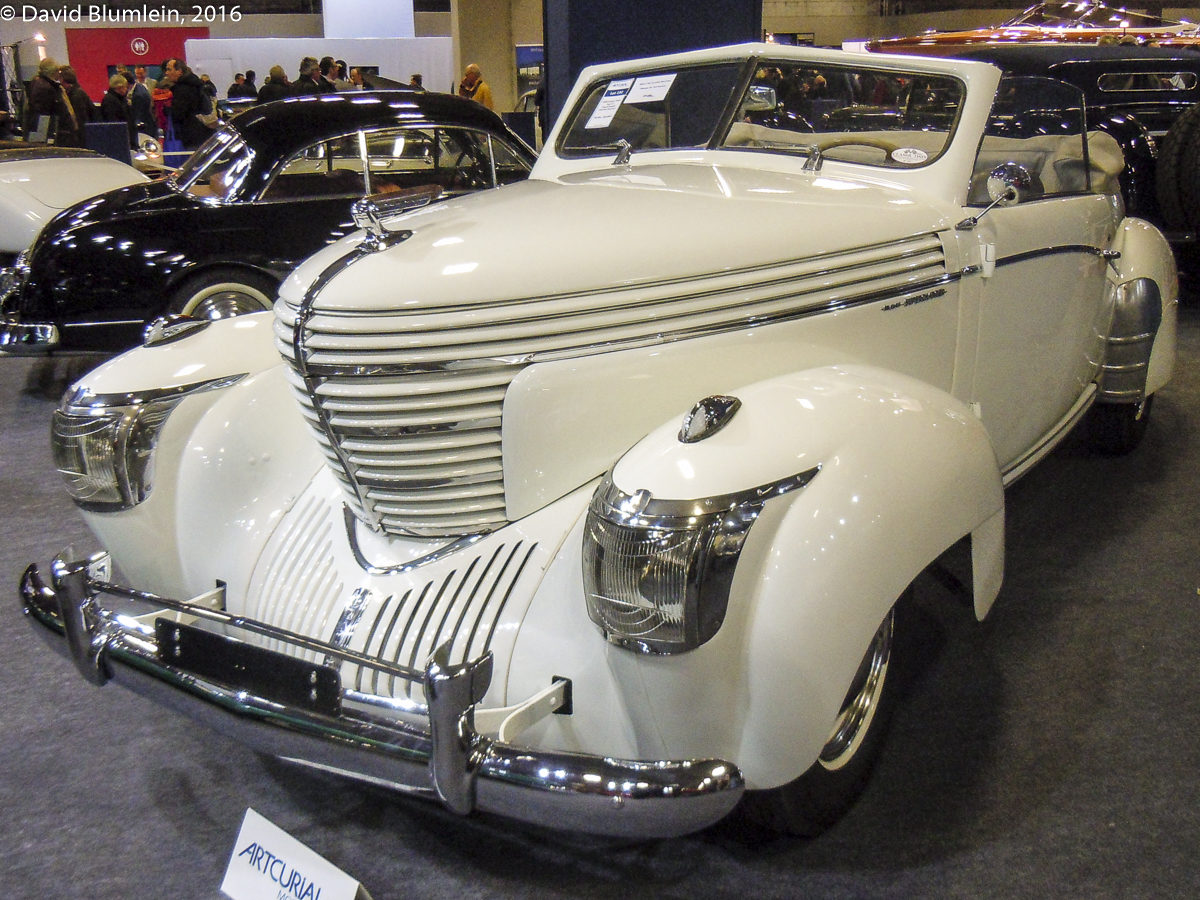 The Graham brothers built up their business by producing large numbers of trucks using Dodge mechanicals and then bought the Paige-Detroit Motor Company. In January 1928 the Graham-Paige range of cars was announced.
It was ambitious and in 1929 the firm made 77,000 cars – they even won the Monte Carlo Rally that year! The Paige name was dropped in the early Thirties and the company attracted plenty of customers with its new ”Blue Streak” styling in 1932, the cars having sloping grilles. In 1934 Graham offered a supercharger on the Custom Eight and, apart from the Auburn 851 Speedster, it was the only American company to feature a supercharger (until 1939). For 1938 a new styling innovation was introduced with sloping-back grille, square headlamps set in the front wings and spats on the rear wheels, this aggressive design earning the nickname “shark nose”. The public did not take to it and only 8,800 were made up to 1940.
The above car is a 1939 Type 97 supercharged cabriolet, a rare example having bodywork by the French coachbuilder Pourtout. It has a straight six 3.5-litre engine developing 115 b.h.p. and a 3-speed gearbox with overdrive.
A final thought: a Graham-Paige of uncertain vintage was bought in 1935 by a Mr Baker for less than £50 and ,with the 8-cylinder engine rebuilt and a two-seater long-tailed body made specially by Harrington of Hove, it went on to win in August 1939 the last ever race at Brooklands! 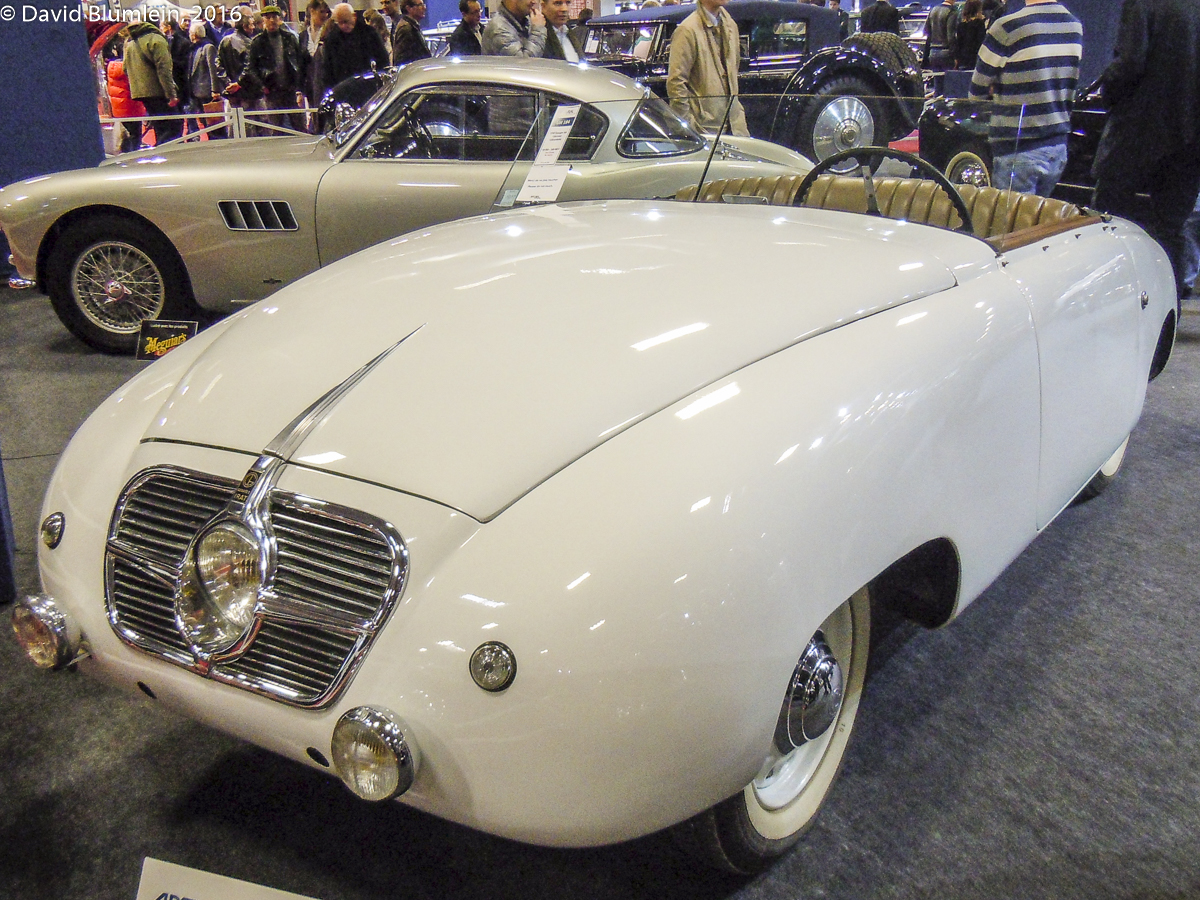 1922 was the year that Georges Irat was making at Chatou an excellent 2-litre sports tourer with a 4-cylinder o.h.v.engine, the work of the former Delage engineer Maurice Gaultier. These cars performed well in the long-distance races of the era. In 1935 the company switched to making attractive 2-seater sports cars, first with Ruby engines and then with Citroën units. 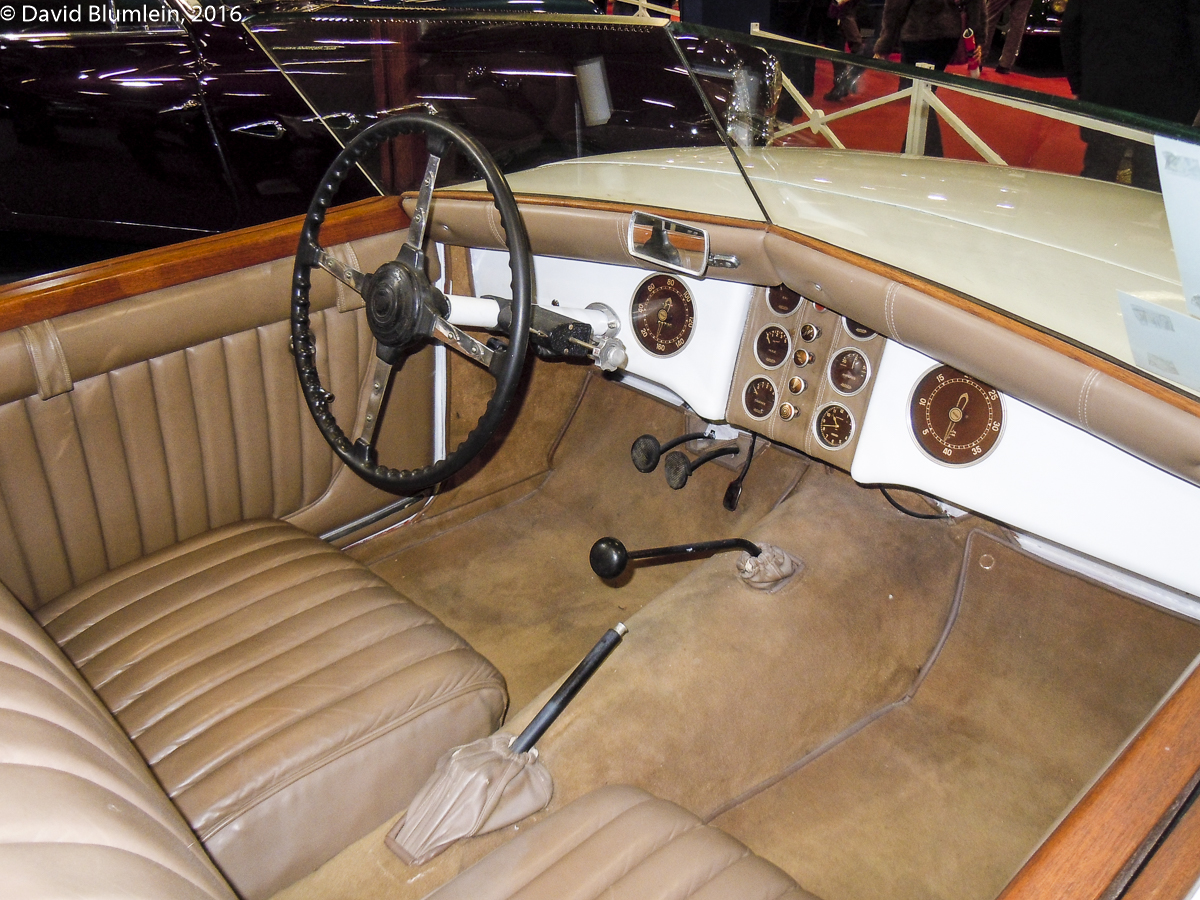 After the war a completely new prototype was shown at the 1946 Paris Salon with a lightweight magnesium alloy frame, a flat-four engine and all-enveloping bodywork. There was no positive response to this and a second attempt was made for the 1949 Paris Salon. This is the car shown here with its Lambourdette body found in the factory at Bègles (near Bordeaux) but it has since been underpinned with a Simca Huit chassis. Again it aroused no commercial interest and thus sadly represents the end of Georges Irat motor cars. 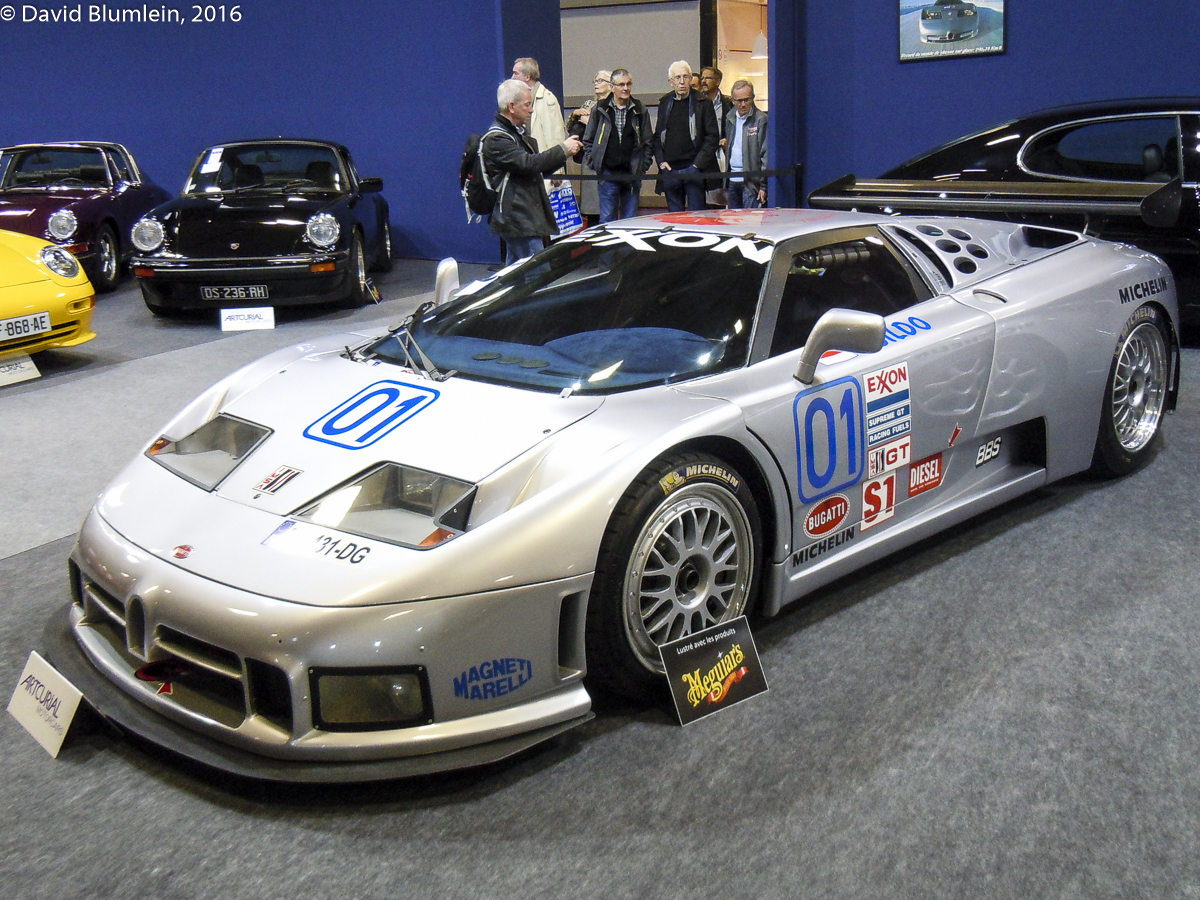 Designed by Marcello Gandini, the Bugatti EB110 had a mid-mounted 3.5-litre V12 60 valve 4 turbo engine driving through all four wheels and a carbon fibre chassis made by Aérospatiale. It came about when Romano Artioli, a big Ferrari dealer in German-speaking northern Italy and the first to import Suzuki cars into the region, set up Bugatti Automobili S.p.A. in a brand new factory at Campogalliano near Modena.. The cars were produced between 1991 and 1995 after which the firm went bankrupt.
The appearance of the EB110S at Le Mans in 1994 has been well documented but less well-known is the racing history of this EB110SS of Gildo Pallanca-Pastor, a Monégasque entrepreneur who entered the car during 1995 and 1996 under the banner of his Monaco Racing Team.
The car’s first race was at the Watkins Glen 3 Hours in June 1995 where Patrick Tambay co-drove it into 19th place. Three weeks later Pallanca-Pastor came 16th on his own at Sears Point. A switch to the BPR Championship race at Suzuka in August brought retirement when a broken front drive-shaft sent Eric Hélary into the sand. The 1996 Daytona 24 Hours saw the car running in the GTS-1 class but there was no luck for Derek Hill (son of World Champion Phil Hill), Olivier Grouillard and Pallanca-Pastor, the gearbox failing after 154 laps. Even more disastrous was Tambay’s accident at the start of the Le Mans Test Day, effectively ending Pallanca’s hopes of running in the 24 Hour race.
The car’s last race came at the non-championship GT event at Dijon in June. Pallanca-Pastor finished 3rd in Heat 1 but Bertrand Balas, having initially led in Heat 2, was cruelly pushed off by Wolfgang Kaufmann’s bi-turbo Porsche 911.
To date this was the last racing appearance of a Bugatti in period. 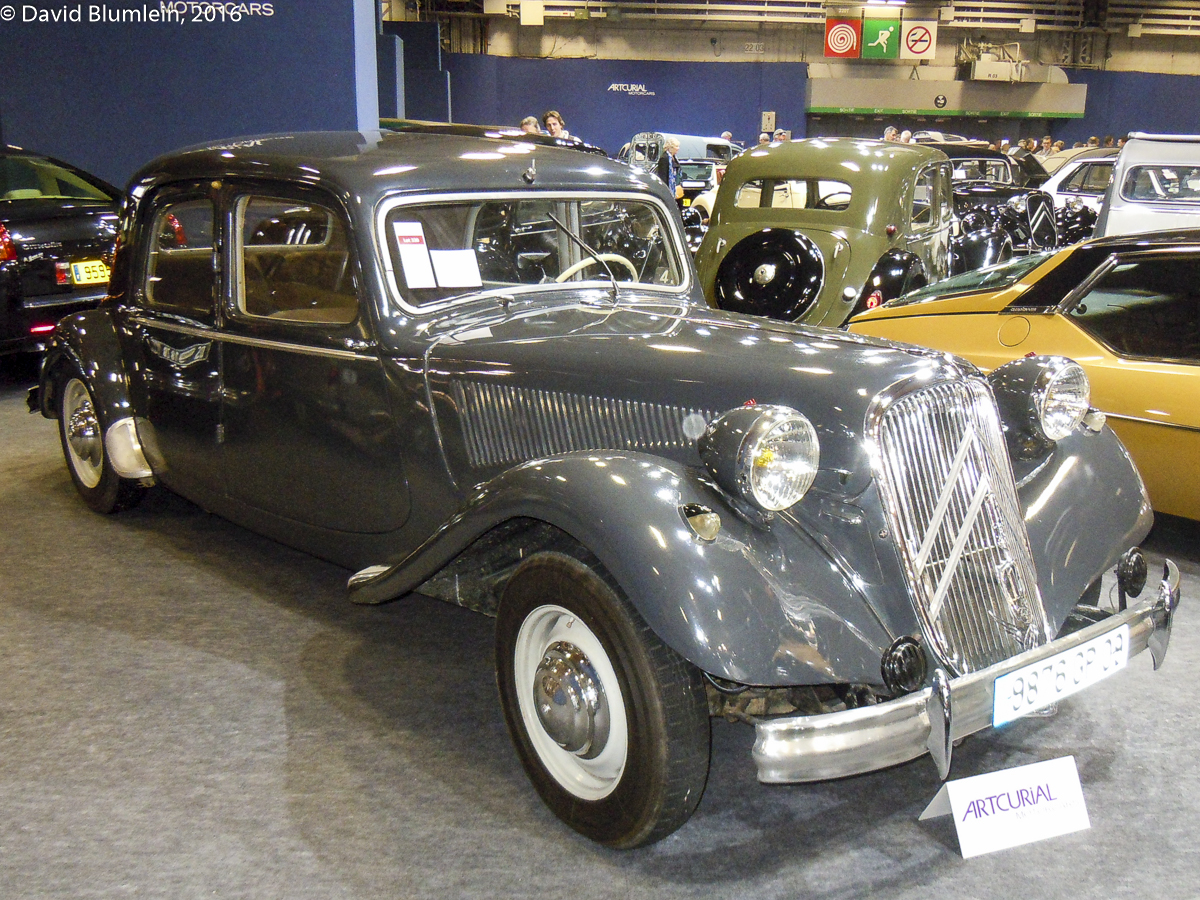 This is the Citroën 15-Six H (Hydropneumatique), a limited series available to selected clients only in 1954, which had the hydropneumatic rear suspension destined for the forthcoming DS19 which appeared at the 1955 Paris Salon. It served as something of a test-bed for the complicated new system and trials revealed that the front suspension needed adjustment to compensate – hence the front torsion bars were lengthened, being extended out at the front.
All this rather mirrors what Citroën did in 1934. Having launched a completely new range of 8, 10 and 15CV at the 1932 Paris Salon, they became known as the Rosalie series after Citroën had gone record-breaking at Montlhéry with Yacco-sponsored special versions, labelled “Rosalies”. In 1933 an 8CV collected many long-distance records, this car known as the “Petite Rosalie”. In May 1934 Citroën equipped the Rosalie cars with the independent torsion bar front suspension that was just appearing on the recently unveiled Traction Avant, Citroën feeling that it was wise to continue offering the Rosalie range while the completely new car was getting established. 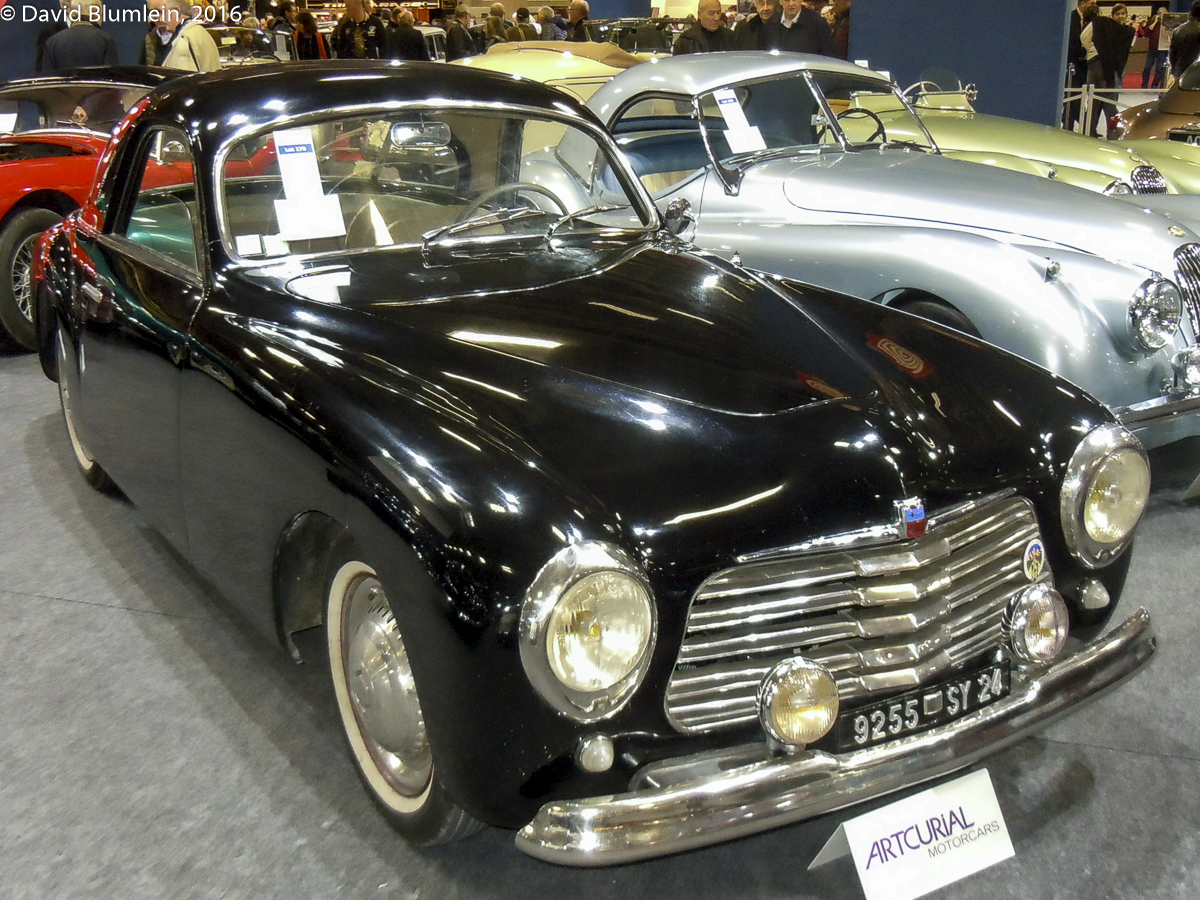 The Simca 8 Sport started life as an elegant cabriolet prototype with a Pinin Farina body at the 1948 Paris Salon in the Grand-Palais. The Head of Simca, Henri-Théodore Pigozzi, liked it so much that he decided to market it and production was entrusted to Facel-Métallon; the process was unusually complicated with the pressings made at Amboise, the assembly at Colombes and the final touches put on at Dreux! A fixed–head coupé accompanied the open version and the car was given an upgraded 1200 c.c. engine.
The coupé gained glory in the 1950 Monte Carlo Rally where the cars finished 4th and 5th overall, Scaron/Pascal winning the 1.5-litre class. A year later the cars were outclassed by the Jowett Jupiters, the Scaron/Pascal Simca Sport finishing 16th and even Trintignant managing only 48th. 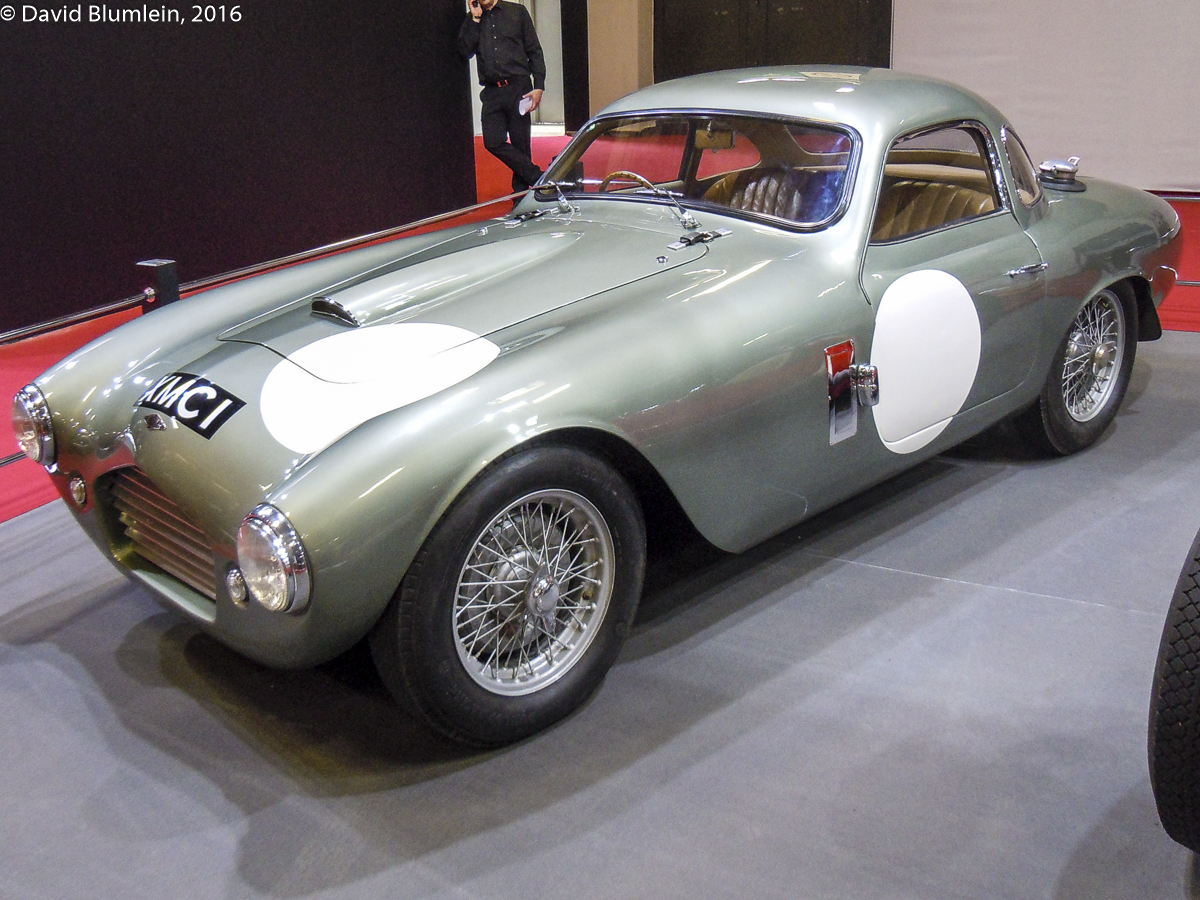 One of nine Frazer-Nash Le Mans Fixed-Head Coupés. It has the usual adjustable slats in front of the radiator, centre-lock wire wheels, an Austin rear axle, iron brake drums and adjustable torsion bars. It was ordered by Mrs Kitty Maurice of Castle Combe and completed in April 1955. It travelled to Le Mans in June 1955 as a support vehicle for AFN’s entries. Mrs Maurice did not keep it for long and AFN eventually bought it back in November 1957.
XMC 1 was sold to John Dashwood in March 1959 and he had AFN prepare the car for that year’s Le Mans race . The rear axle location was modified with a Panhard rod and rose joints in place of the original A-bracket. Driven by Dashwood and Bill Wilks, this was the last Frazer-Nash to race at Le Mans. After three hours Dashwood slid into the sandbank at Arnage when the brakes faded. The gearbox split as he tried to slow down and the steering was damaged. 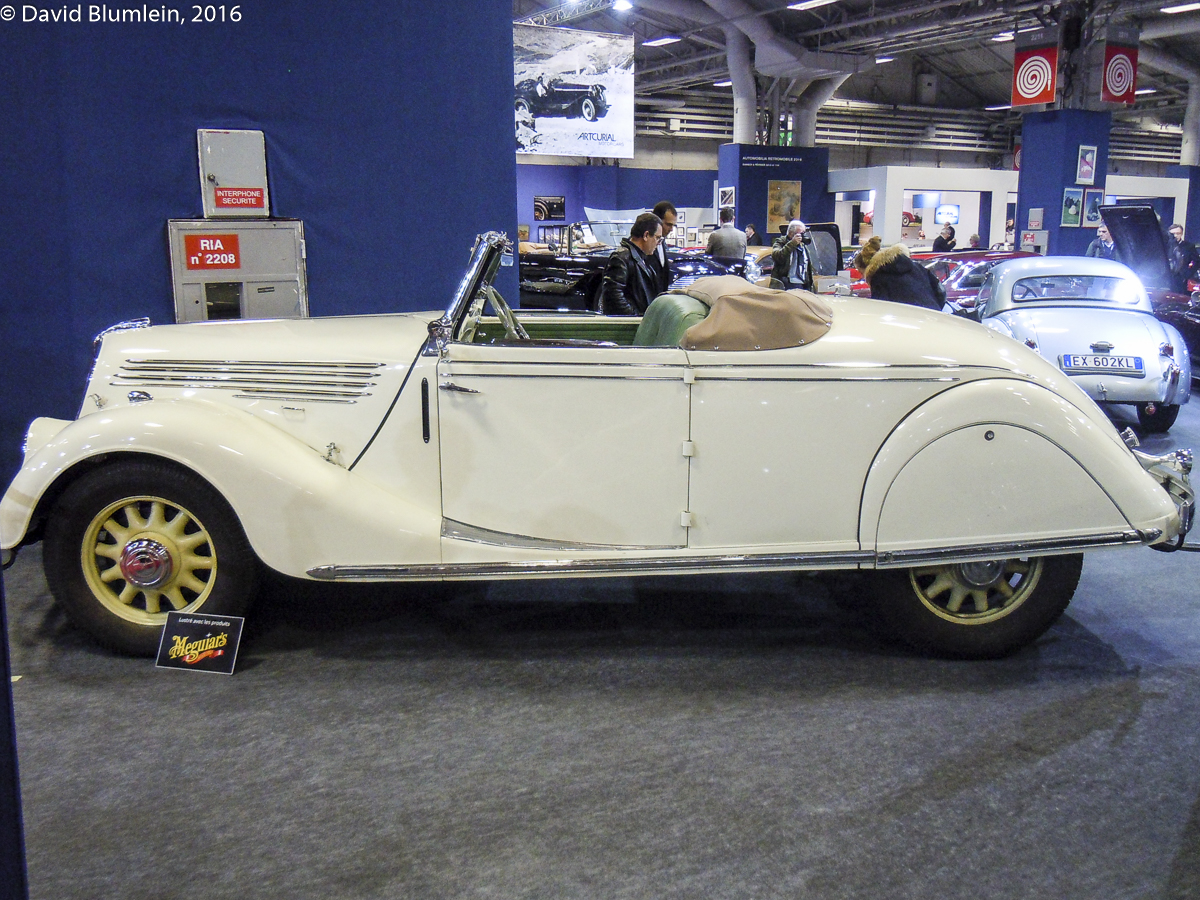 When launched at the 1934 Paris Salon the Renault Vivastella Grand Sport had a 3.6-litre 6-cylinder engine. But shortly after the Show the Vivastella Grand Sport became the Viva Grand Sport (Type ACX 1) and this had a 4.1-litre motor and more aerodynamic lines inspired by the famous Caudron-Renault Rafale aircraft, holder of the World Hour Record. The first Viva Grand Sport for 1936 (Type ACX 2) appeared in the summer of 1935 at the Concours d’Elégance du Bois de Boulogne. Refinements included a single-piece windscreen and a re-designed rear profile. 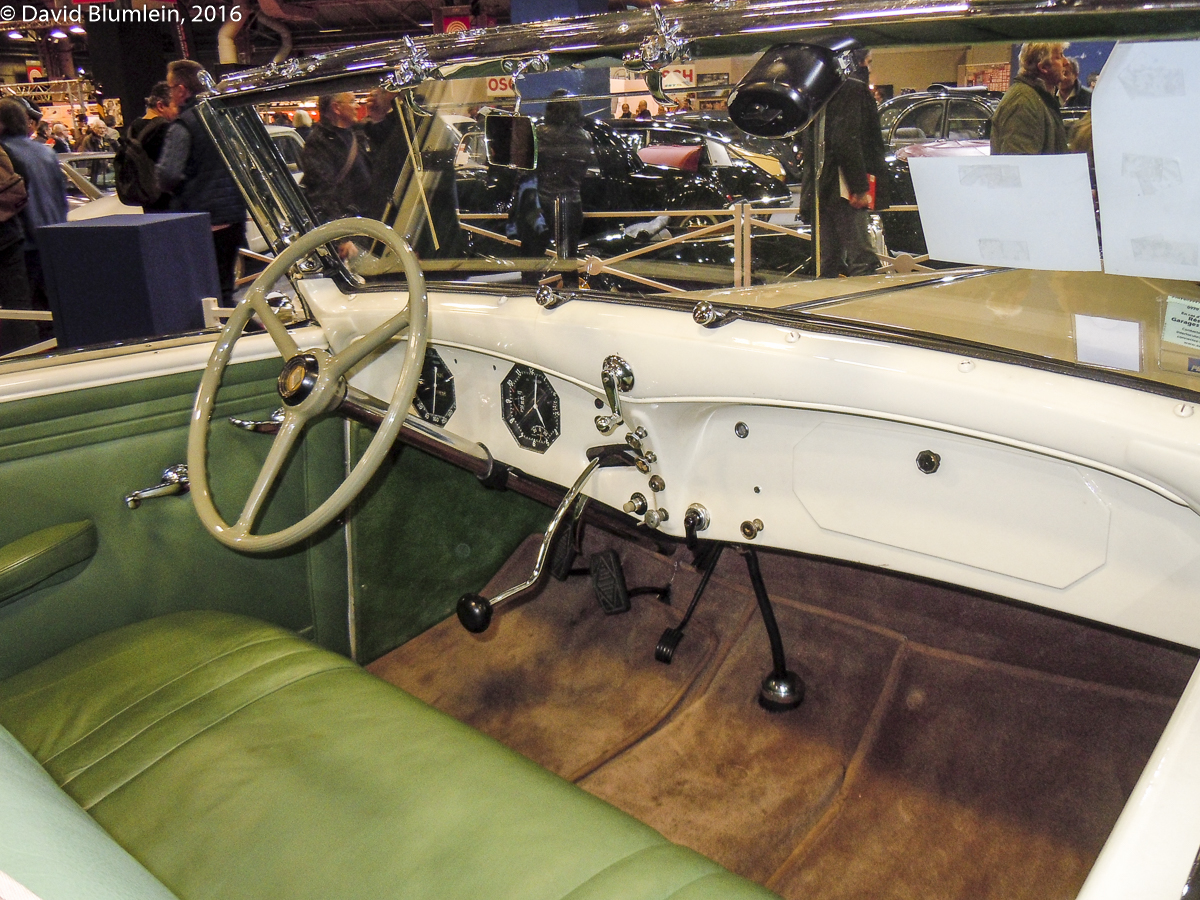 This 1936 example is one of only three drivable surviving cabriolets. Notice how the gear lever, although operating a central change, is deployed through the dashboard! I note that the prominent French racing driver of the Thirties, René Le Bègue (winner of the 1937 Monte Carlo Rally and the 1939 Comminges Grand Prix) began his career using a Renault Viva Grand Sport. 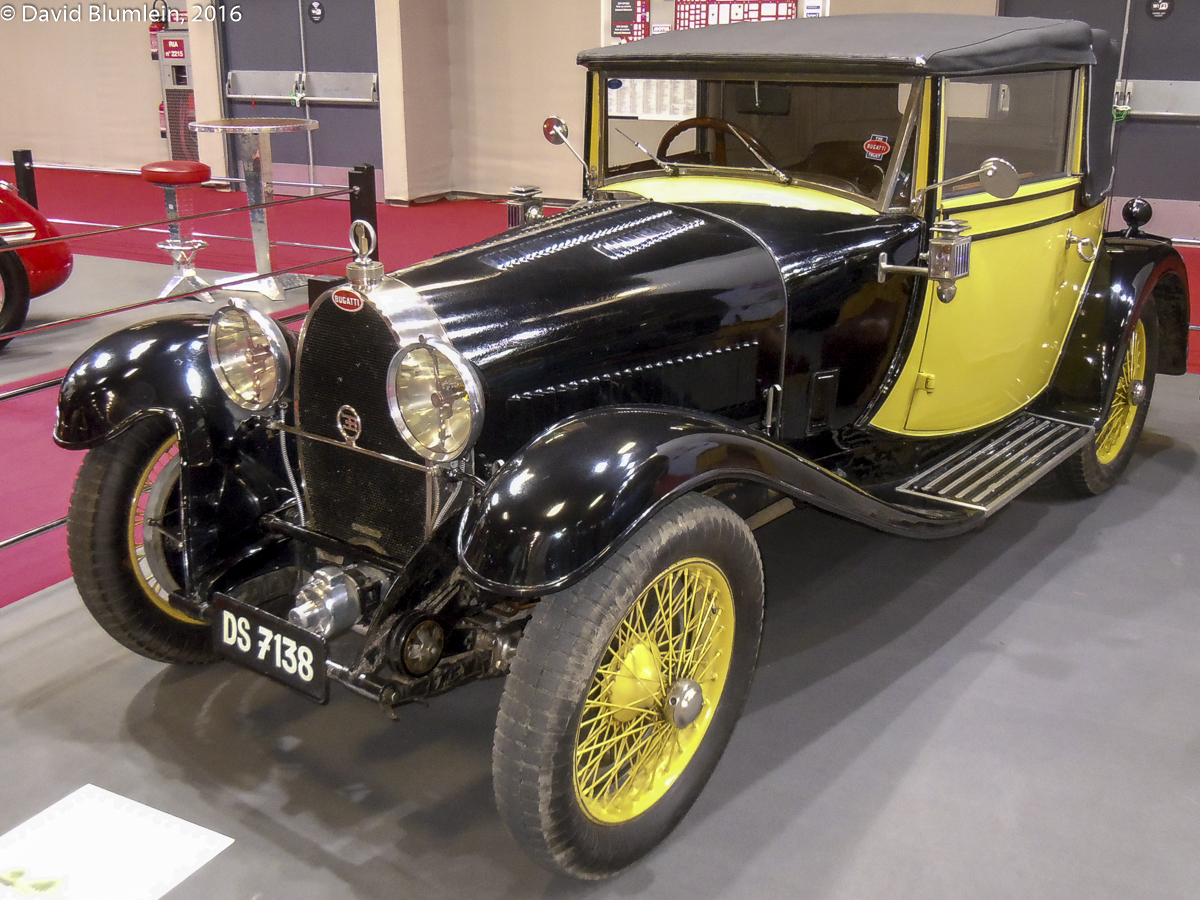 This is a Bugatti Type 40. Jean Bugatti took it off the production line in 1928 and designed a “fiacre” type body for it especially for his younger sister Lydia. The car was often “borrowed” by Bugatti racing drivers!
Bugatti launched the 4-cylinder racing Type 37 at the end of 1925. In mid-1926 he introduced the Type 40 to replace the Brescia as the 1.5-litre touring car. He took the engine of the Type 37 and fitted it to a new touring frame, stronger than that in the Brescia. He gave the car a narrower track and a new radiator.
Two French ladies, Marguerite Mareuse and Odette Siko, drove a Type 40 in the 1930 Le Mans race, finishing in 7th place.
Approximately 830 of the Type 40 and 40A were made.
TAILPIECE 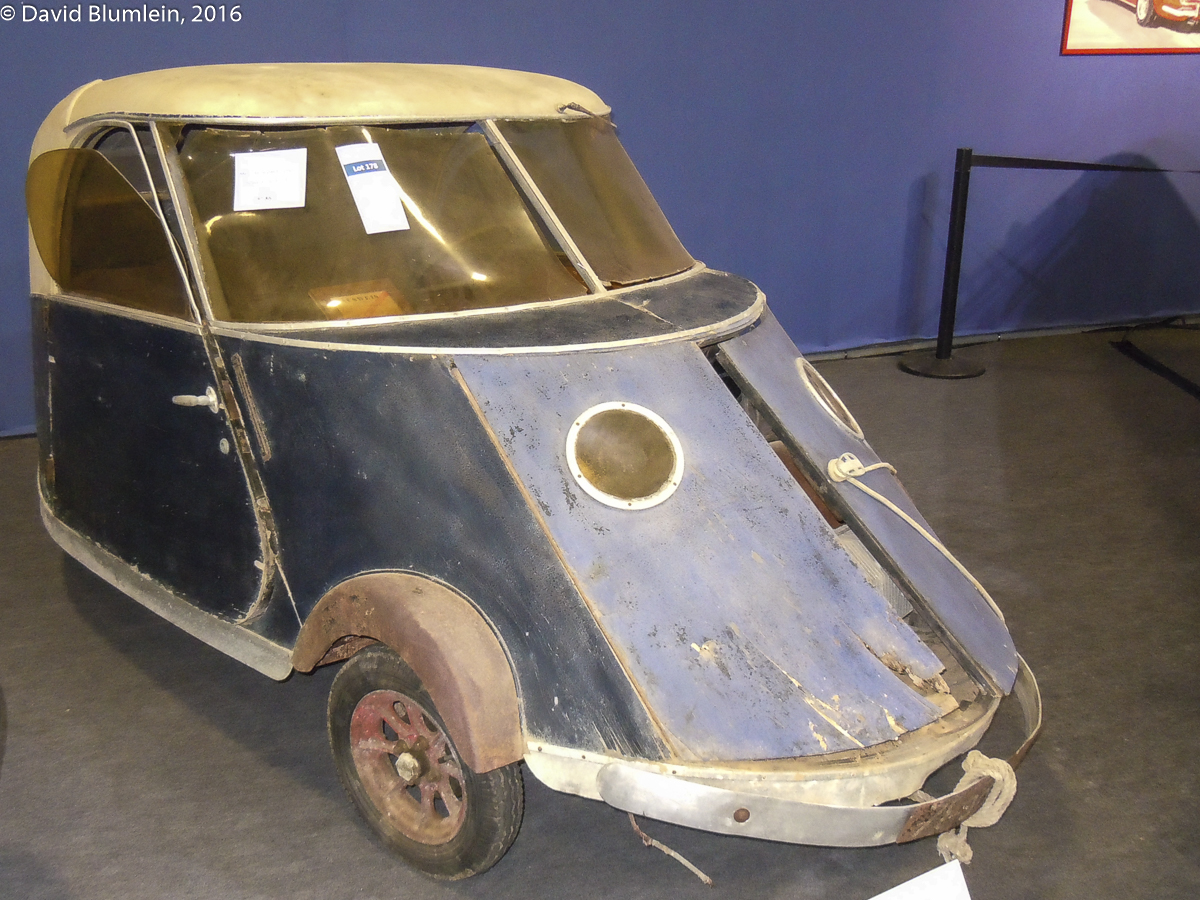 Back in 1908 you could buy a Detroit Electric car which would do 45 m.p.h. and have a range of 70—80 miles; not much progress since then evidently! There is currently a new vogue for electric cars in the name of zero emissions but, the moment the car is plugged in to recharge its batteries, the pollution is, of course, merely transferred to the power stations!
Under German Occupation during the Second World War, the French had little alternative to resorting to electrical power with a serious shortage of petrol and raw materials. All sorts of crude cars came on the market, this 4-wheeled Pierre Faure being one of the better ones. Constructed from October 1940 onwards at Vitry-sur-Seine, this 2-seater had a backbone chassis with a narrow track at the rear to avoid the use of a differential and front suspension by a transverse leaf spring. Six batteries were located in the nose and these gave a speed of approximately 25 m.p.h. with a range of some 50 miles.
The car was shown at the 1946 Paris Salon but could not compete with the new petrol cars and production ceased in 1947. It is thought that about 20 were made.