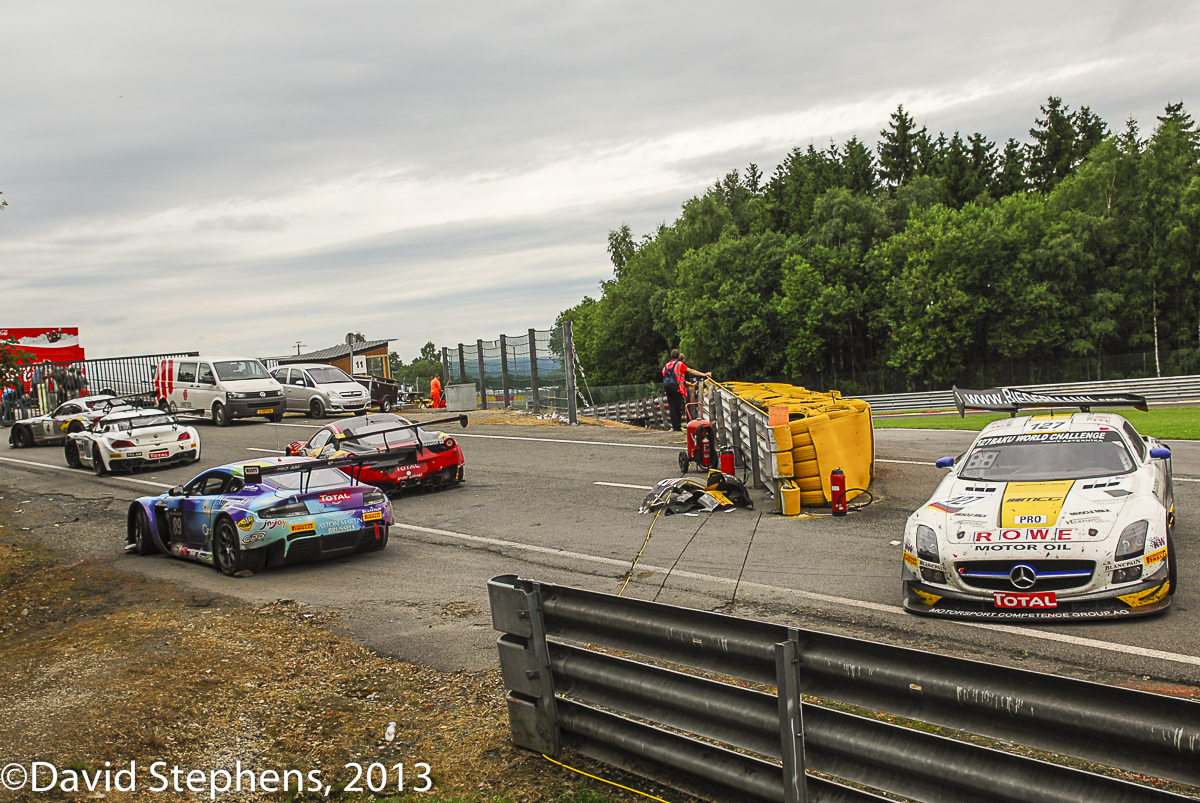 The scene at Les Combes last Sunday morning, two Z4s a 458 Italia, a Vantage and a SLS lie abandoned and broken, like the dreams they once carried.

Endurance racing can be a cruel sport. 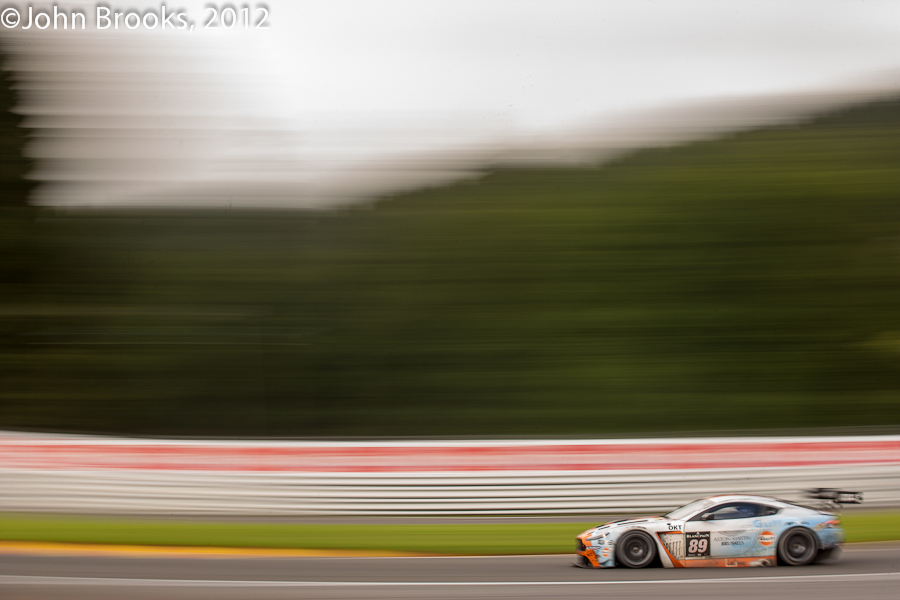 After the deluge on Friday and Saturday at Spa, Sunday morning was much more agreeable, feeling like a summer’s day. So there was an incentive to climb up from an overflowing Eau Rouge to Raidillion, a fine place. An Aston Martin also makes the ascent.

The Spa 24 Hour race is only a year younger than the more famous Le Mans 24 Hours. Yet this splendid Belgian event, first run in 1924, has built up a wonderful tradition with its entry lists including a variety of interesting marques that have never graced its French counterpart.

It has not been run quite so consistently over the years, the Belgian club, the R.A.C.B., lacking the mighty resources of the A.C.O. ; there was a notable gap from 1949 until (1953 excepted) its resumption fifteen years later and that thanks to the initiative of that worthy journalist-cum-driver Paul Frère.

In 1964 it became a Touring Car event, and no less hotly contested for that, and has embraced the GT category since 2001 ; this year the entry was more straightforward : GT3 and GT4. For many years the race included the award of the Coupe du Roi, effectively a team prize donated originally to the Club by King Albert in 1912. Manufacturers were naturally very keen to win this prestigious trophy, sometimes entering teams for this sole purpose such as Delage in 1931 who, when one of their cars hit a tree, withdrew the other two and went home!

Sadly in more recent times this trophy has been cast aside – the Spa 24 Hours has lost something of its prestige as a result Nevertheless it remains a big event – 62 starters this year – and generates an atmosphere all of its own, especially by night with headlights winding their way through the dark forested valley lit up only by the spectacular fireworks at around 11 p.m. And the circuit allows little chance for the drivers to relax particularly with the frequent risk of rain for which the Ardennes, like its extension in the Eifel region of Germany, is so well-known.

This year’s race is memorable for Audi winning at last and for this being the first 24 hour success for the R8 LMS. Like Porsche the company has been content to leave the car in the hands of good professional private teams but until now the model never quite made it in the big 24 hour races. The factory gave greater backing this year, hence the presence of Audi Sport chief, Dr Ulrich. Let us not forget that the R8 LMS had its first ever race win here at Spa in the first of two Belgian GT events during the weekend of the Spa 1,000 km race in May 2009. Such “firsts” prompt the memory to recall that Peugeot achieved the French marque’s first success in a 24 hour race when it won the 1926 Spa event with its sleeve-valve 18cv Sport model. 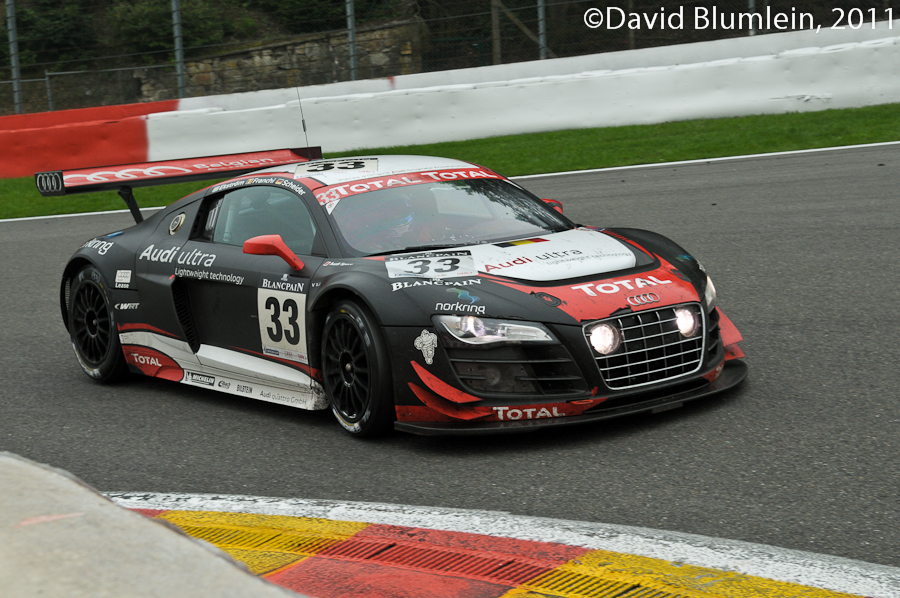 No less than seven of the new Mercédès SLS  AMG GT3 s started the race and of special interest was the car no. 35 which eventually finished in third position overall. Although run by the Black Falcon team it was painted red as a tribute to the 40th anniversary of AMG’s first entry in this race in 1971. They used the car that came to be known as the “Röte Sau” (red pig) and was a 300 SEL saloon with a 6.8-litre version of the V-8 to be found in the big Mercédès 600 Saloon. Carrying the number 35 it finished 2nd overall just 3 laps behind the winning Ford Capri driven by Hans Heyer (father of Kenneth Heyer, one of the drivers of the red SLS) and Clemens Schickentanz.

This over-weight saloon was on show in the race paddock for all to admire – it turned out 420 b.h.p., it had a 4-speed automatic gearbox, disc brakes all round and air suspension! Not surprisingly the heavy machine was somewhat handicapped by having to refuel frequently and by its tyres which wore out rather too rapidly, but it represents history for Aufrecht Melcher Grossaspach (AMG) which grew to become the in-house sporting arm of Mercédès Benz. Interestingly, Mercédès themselves also had their first 24 hour race success when one of the two SSK cars entered won the 1931 Spa 24 Hours. 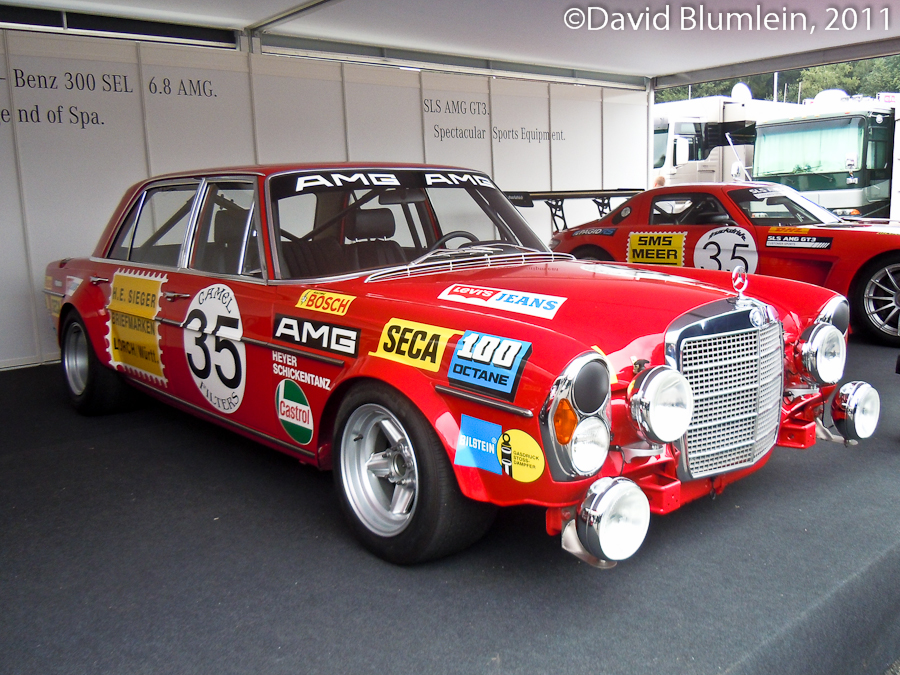 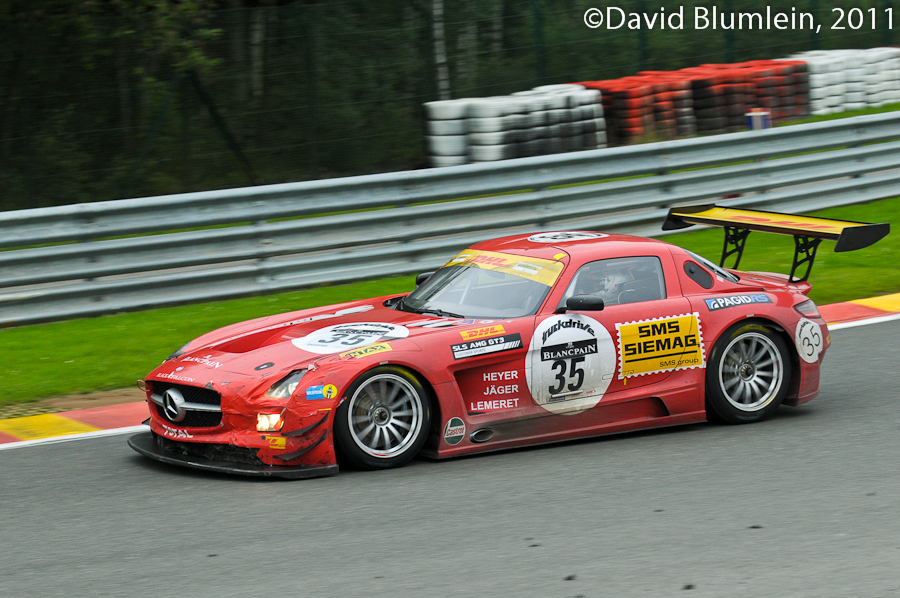 The McLaren MP4-12C  had of course made its race début three weeks earlier at Spa when the British GT cars had two rounds of their Championship at the Belgian circuit but it was exciting to find three of the very new cars on the grid for the 24 Hour race. Fate was not exactly kind to them: the no.59 slammed violently into the barriers just below La Source after a coming-together with the GT4 BMW M3 in the early laps and the no.58 decided to catch fire coming away from the Les Combes corners on the highest part of the circuit later on the Saturday evening. 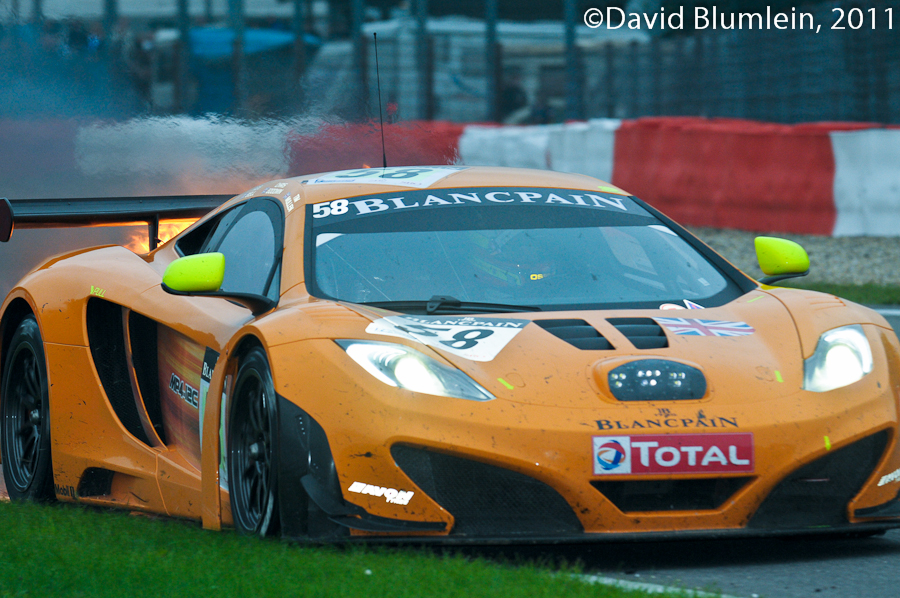 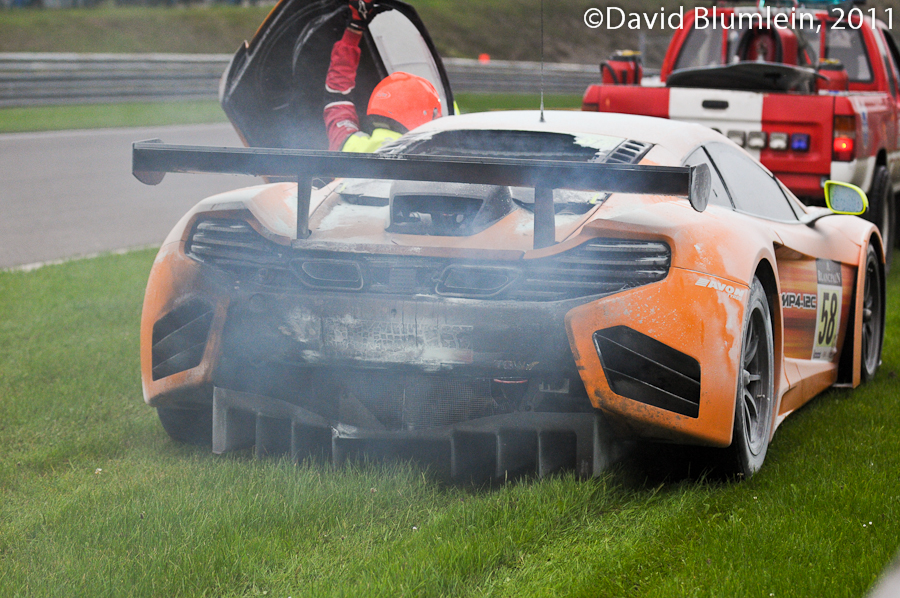 Smoke Gets In Your Eyes

The remaining car no.60 did reach the finish albeit in a lowly 25th position but don’t forget that these are completely new cars with their own completely new engines. 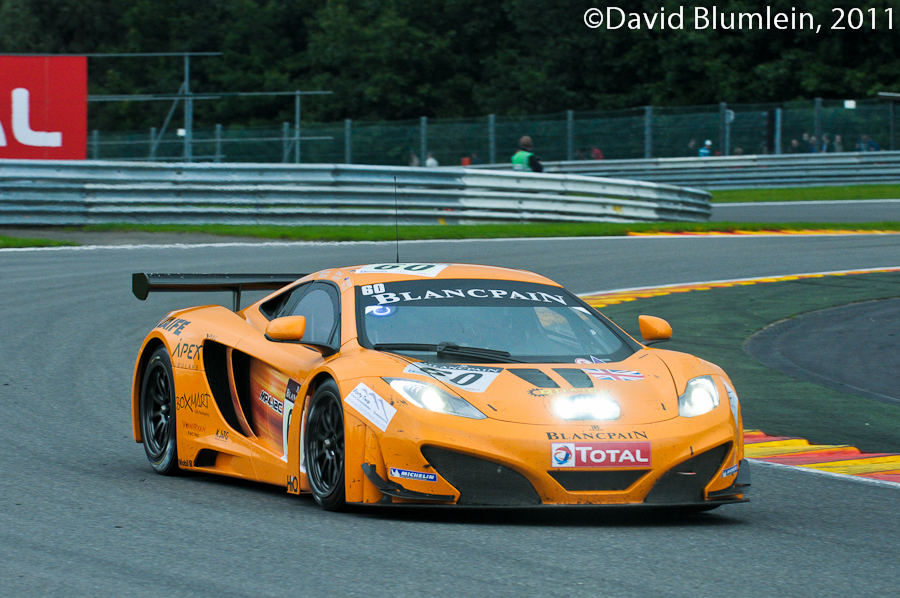 The GT4 class had just four runners after a Porsche had been withdrawn. The little Lotus Evora had things its own way for a long time until its engine sadly cried enough creating an internal fire and when the Aston Martin Vantage retired the BMW M3 had to play second fiddle to the Nissan 350Z which eventually scooped the category. 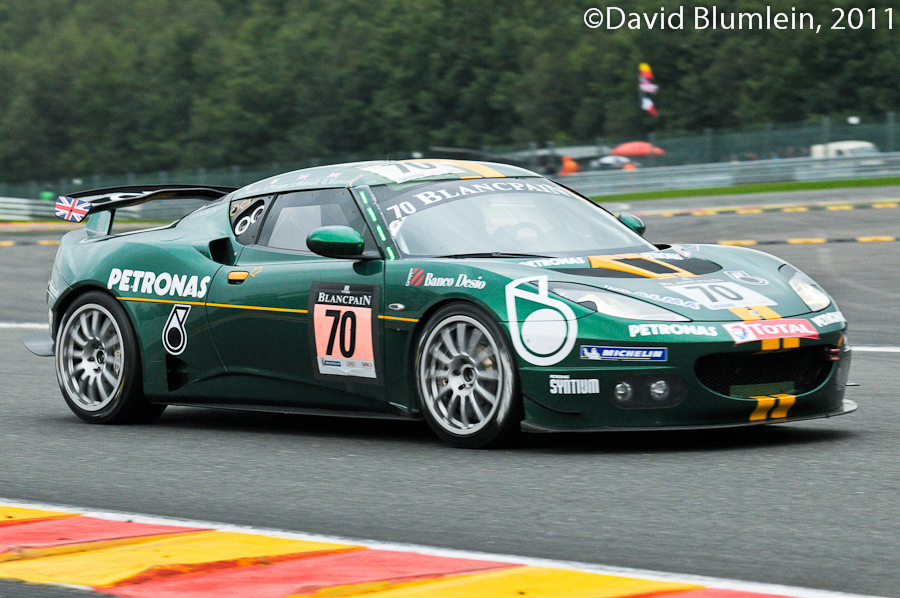 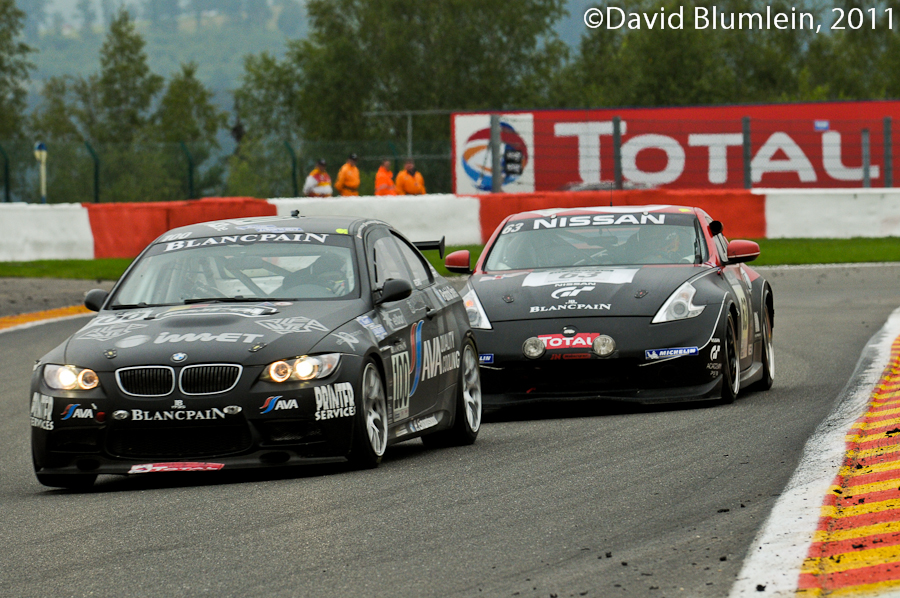