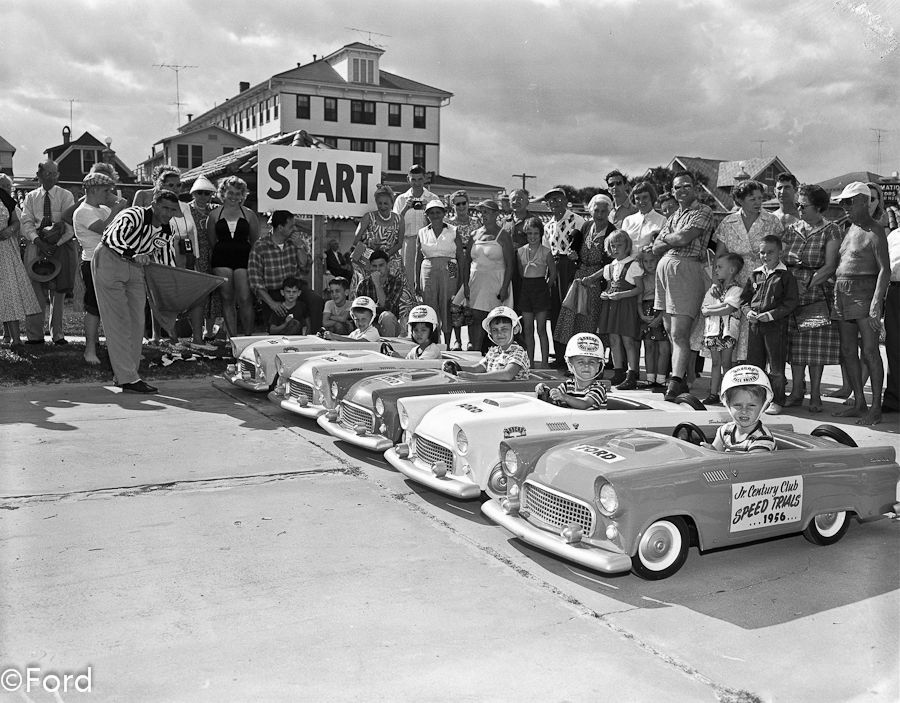 Daytona Beach has seen some strange sights over the years and this is right up there with the oddest. Back to another world, 1956 and promotional work for an obscure fledgling race series, called NASCAR. 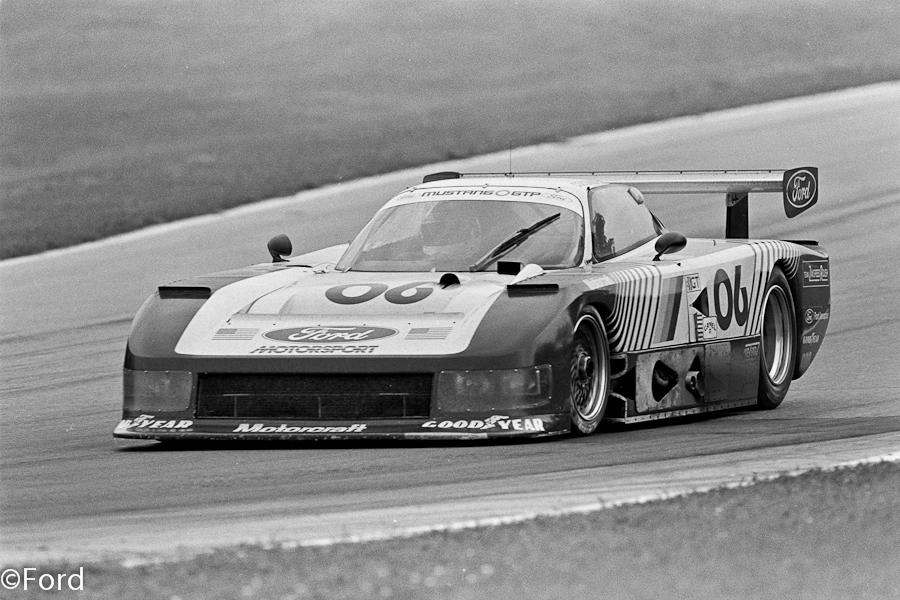 August in Wisconsin, must be Road America at Elkhart Lake. A majestic race track, one of the finest in the world.

Back in 1983 Ford were winning in what was, more or less, their back yard. Klaus Ludwig and Tim Coconis taking the Mustang GTP to victory in the Budweiser 500. It was the high point for the project as persistent engine problems torpedoed any further success. 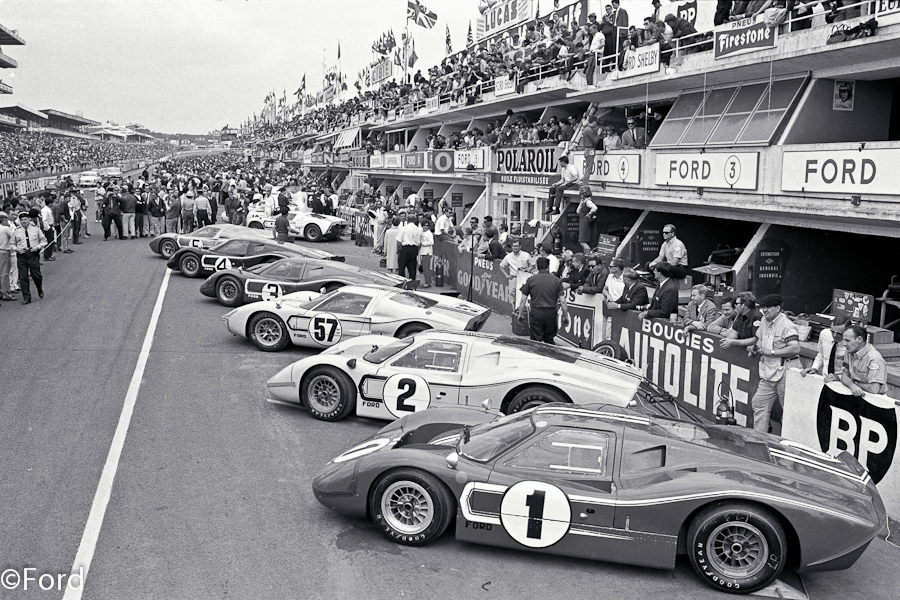 1967 and Le Mans, just prior to the start. Ford have their armada of cars lined up in front of the pits. The rest of the field know that they are in for a long day and night, vainly chasing after the Ford fleet.

Ford UK should be getting a telegram from Her Majesty Queen Elizabeth ll any time now. They celebrate 100 years of activity in this country, starting with a showroom in Central London in 1911. 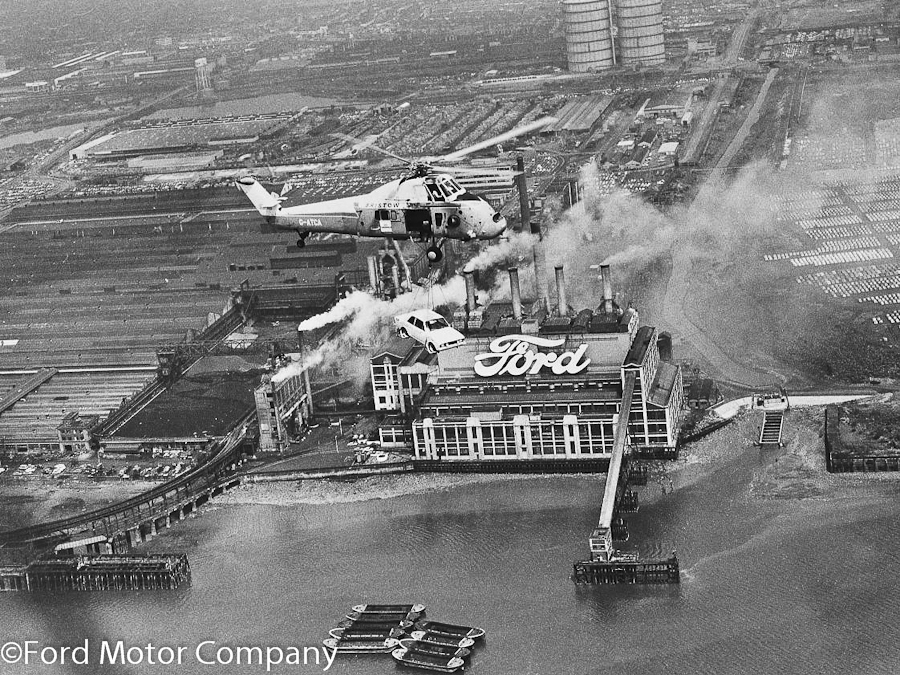 One Stop Past Barking

Like most of the car manufacturing industry they have been prolific recorders of times past, having huge photo libraries available. Through the excellent Newspress service, Ford have made a selection of images from the period available to outlets such as DDC.  So here they are. Above is a Ford Cortina from 1970 dangling above Dagenham. Why? No idea, but someone in marketing thought it a good way of spending the budget. 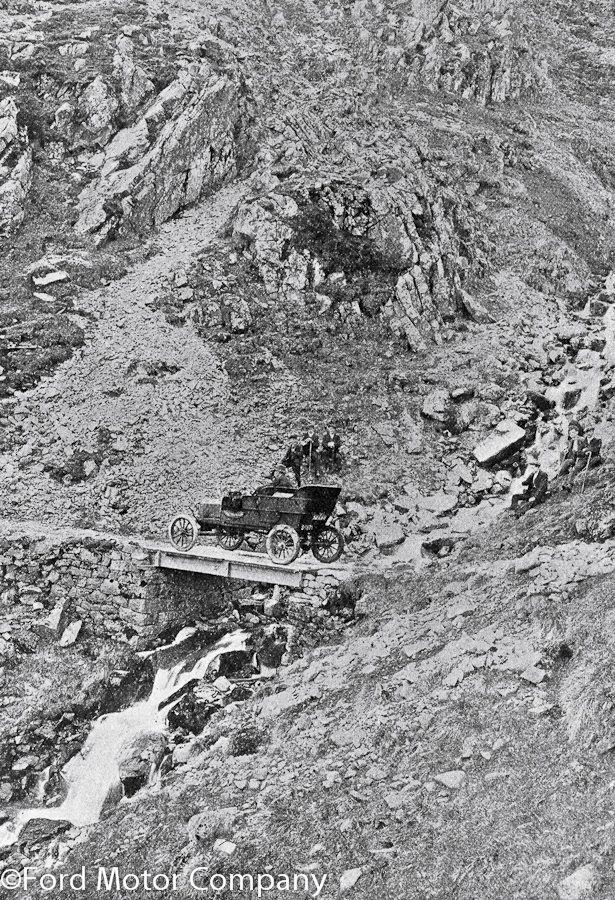 The Model-T is not readily associated with off-roading but 100 years ago an intrepid snapper caught an even more intrepid driver ascending Ben Nevis in one of Henry Ford’s finest. 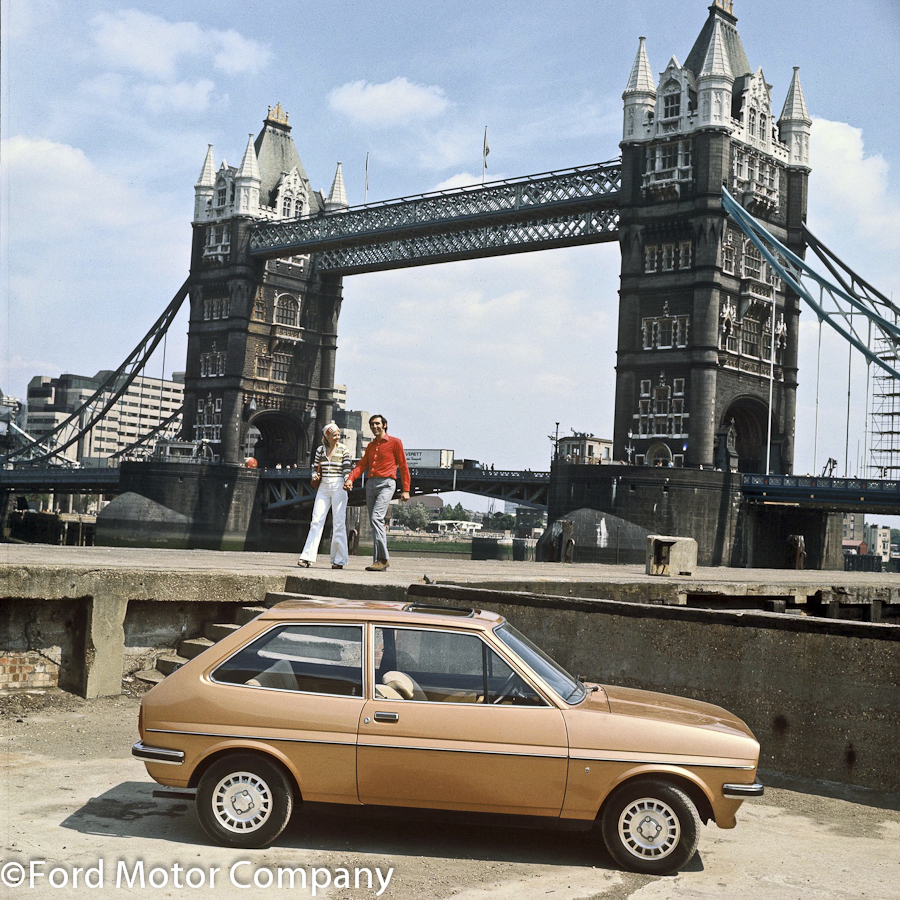 Ford has become part of the fabric of the nation. Maybe not as much as Tower Bridge but you know what I mean. Dating from the time of fashion crimes, 1976, I should know, I was there, guilty as charged. A bronze Fiesta and a couple of hipsters. 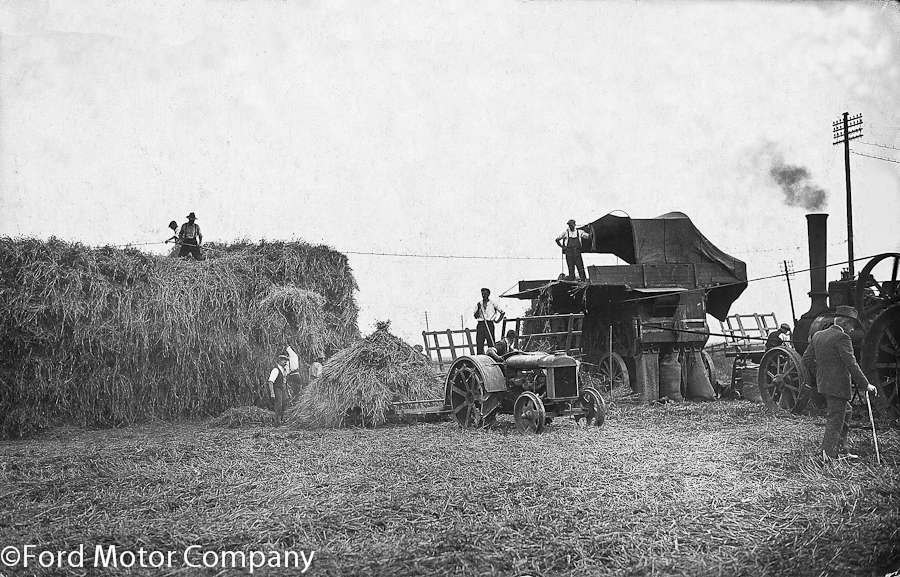 When you look at Dagenham now, it is hard to imagine this is how it looked 100 years ago. 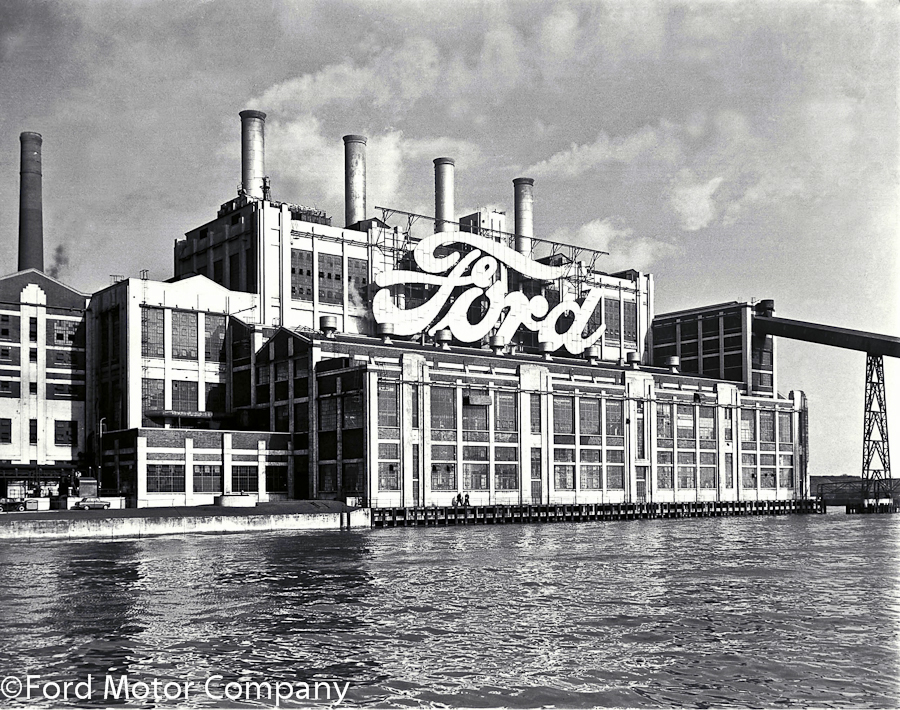 Henry Ford decided the “Detroit of Europe” would be built on the Thames, just east of London. This is how it looked at the height of its power, in 1957. 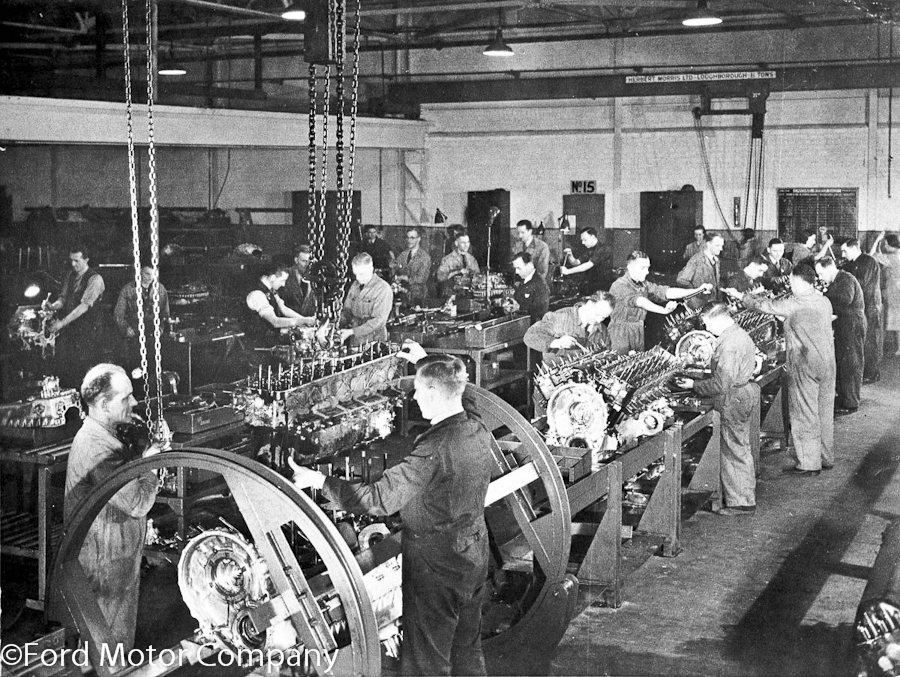 But Ford in the UK were not just about motor vehicles. Here in Urmston, Manchester the company produced Rolls-Royce Merlin aeroplane engines. There was a war on, you know.

The Dagenham factory opened in 1931 but really became successful when Ford concentrated its marketing efforts on the likes of the Model Y, emphasising price and value for money. 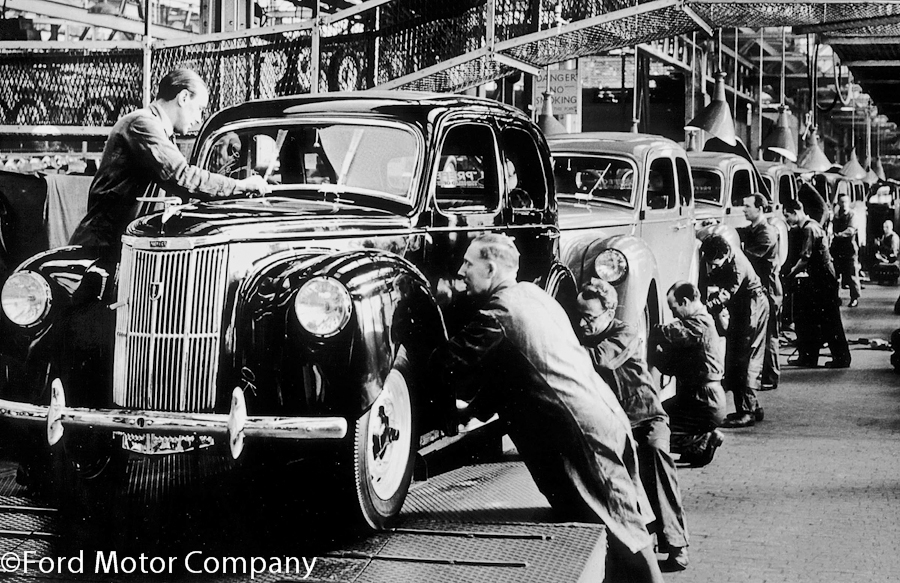 I Walk the Line

After World War Two, the model range continued to be conservative but the production lines were kept busy. 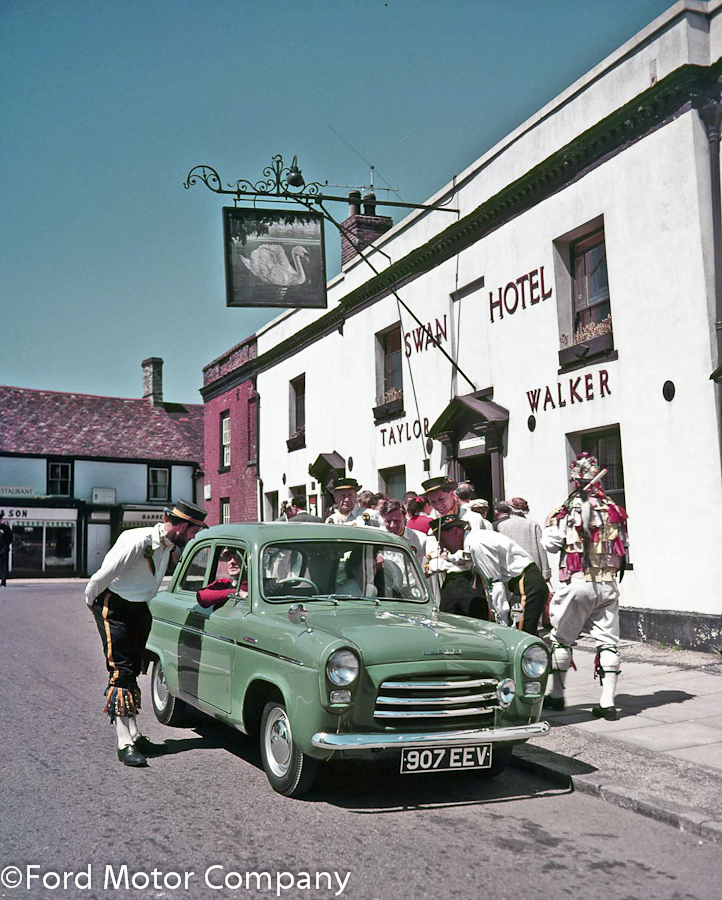 The affluence of the 50’s meant refining products to bring them into line with the demands the post war era market. Introduced in 1953 the Ford Anglia 100E sold for £360, over 300,000 were produced. Here the unlucky couple in the car encounter that scourge of quaint English villages, The Morris Dancers. 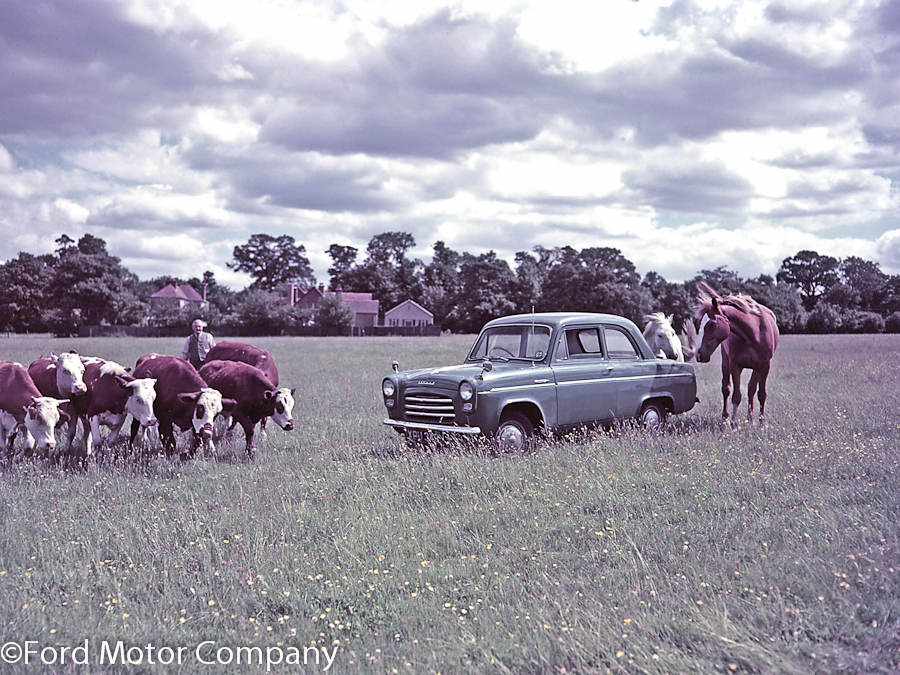 I am not sure just what brand values this shot would have been trying to extol. 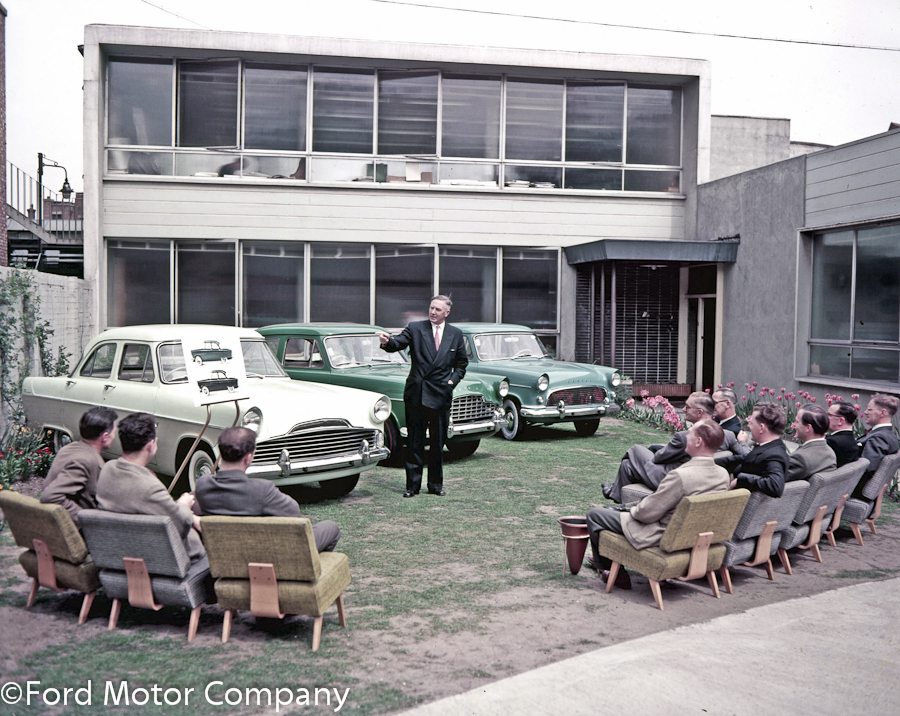 Changes in the way that cars were sold to increasingly demanding public meant that Ford had to move with the times. “Ford executives were invited to abandon the office for fresh air and a chance to see the Mark ll versions of Ford’s popular family cars. Launched in 1956 and marketed as the ‘Three Graces’, the Mark ll Consul, Zephyr and Zodiac marked a further step in British motoring away from post-war austerity towards glamour and modernity.” Or so the press release says. 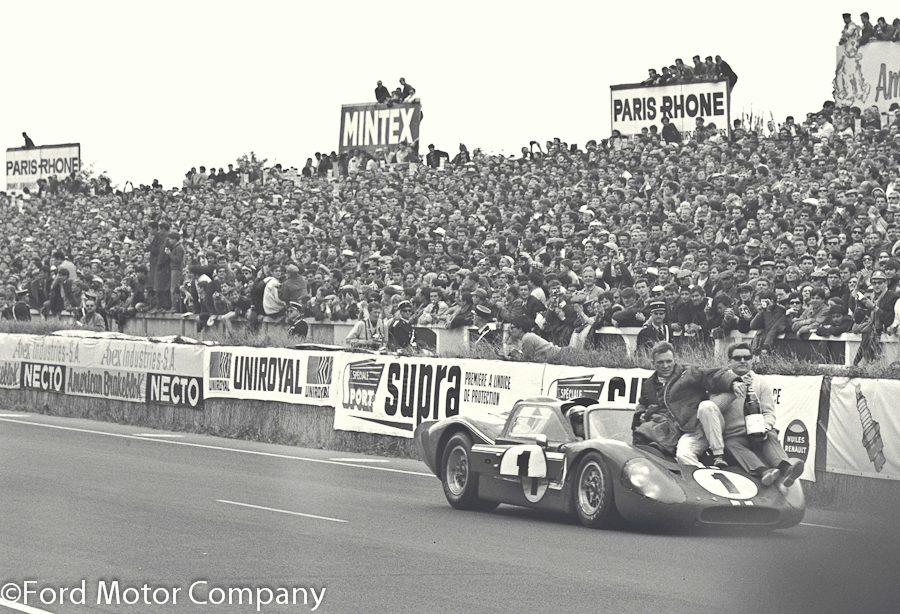 Ford harnessed the power of motorsport to enhance their brand during the 60’s, taking on Ferrari at Le Mans and eventually crushing them. 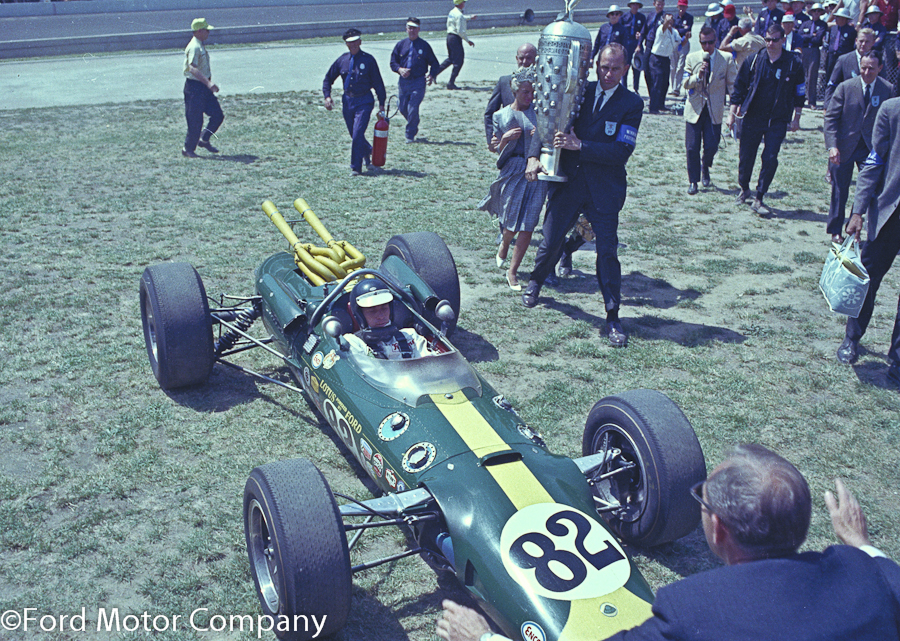 Back in the U. S. of A., a partnership with Lotus brought victory at the Indianapolis 500. Jim Clark is about to receive the Borg Warner Trophy. 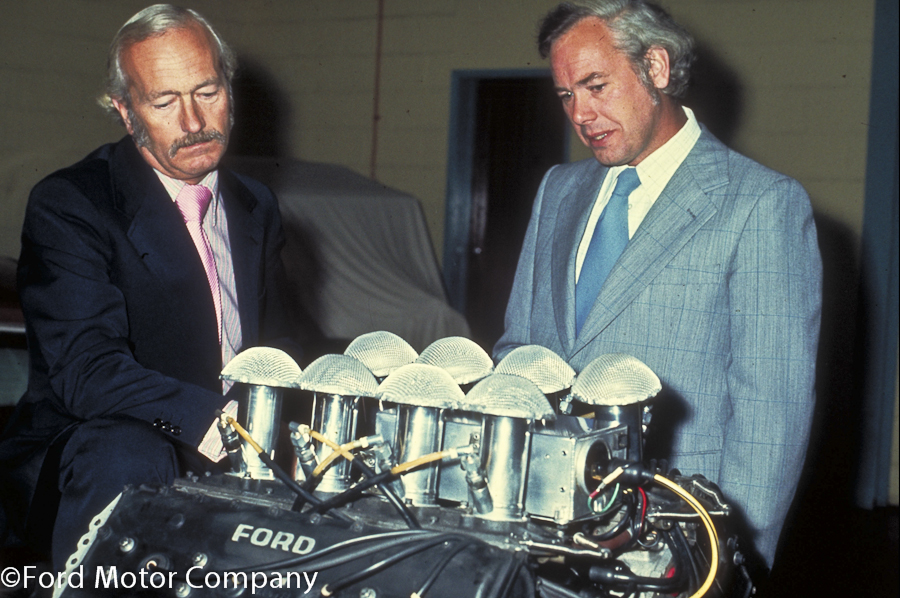 Even more significant in the long term was the Ford Cosworth V8 engine project. It powered the changes in Grand Prix racing, taking it to a truly global level. Colin Chapman and Keith Duckworth ponder the beast. 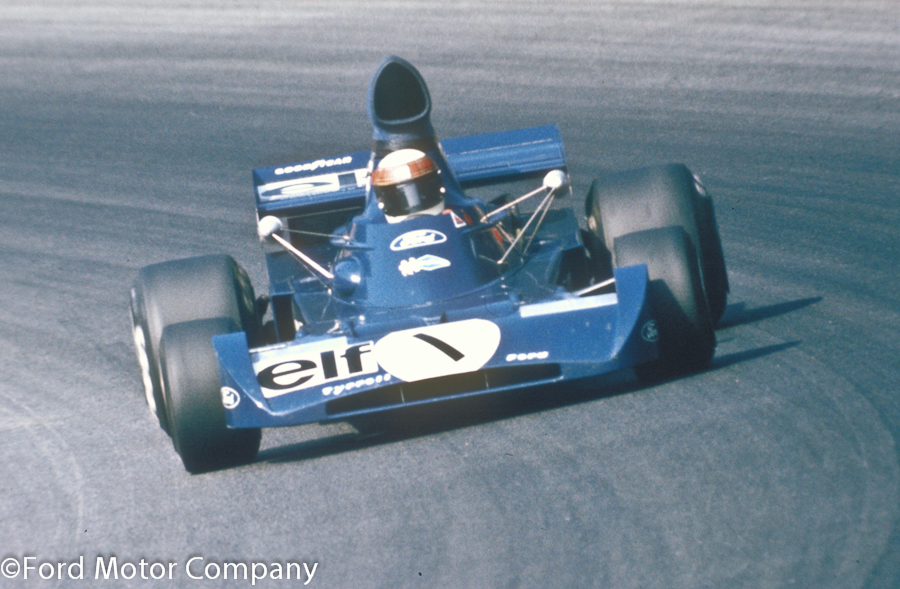 All of this activity had significant input from Britain and Ford UK.  And a significant effect on the sales performance of Ford here. 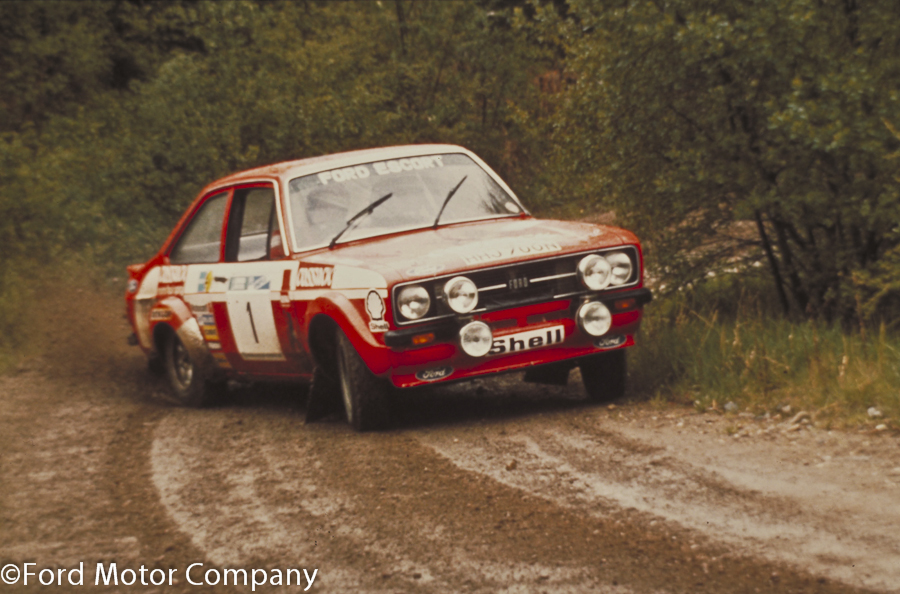 Not just on the tracks but also in the forests. 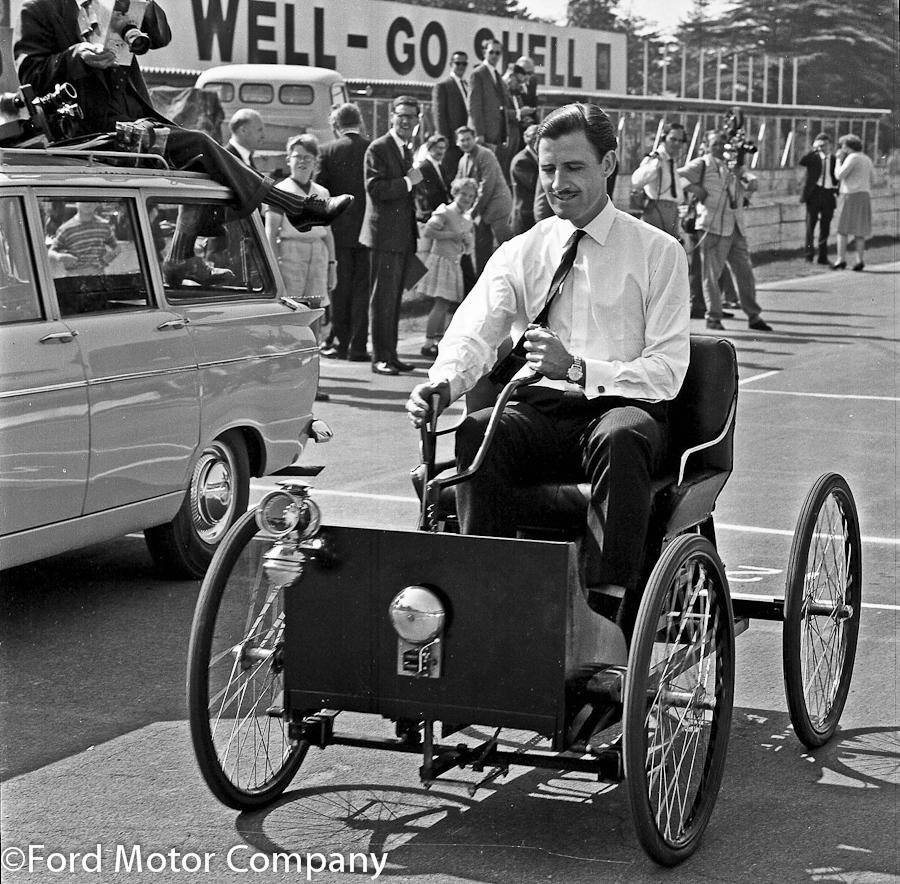 Left Hand Down, a Bit.

And if motor sport was not enough to attract the attention of the buyers, there were always promotions and gimmicks. Sometimes involving motor sport as well. Here Graham Hill, the current Formula One World Champion, drives the original Quadricyle. This was built by 32-year-old Henry Ford in 1896. Constructed of wood and metal it weighed only 500lbs, had a top speed of 20mph and no brakes, it rather looks as if Graham has just discovered that feature. Quite why someone who was driving for BRM in F1 and Le Mans was doing this sponsor work is not clear. 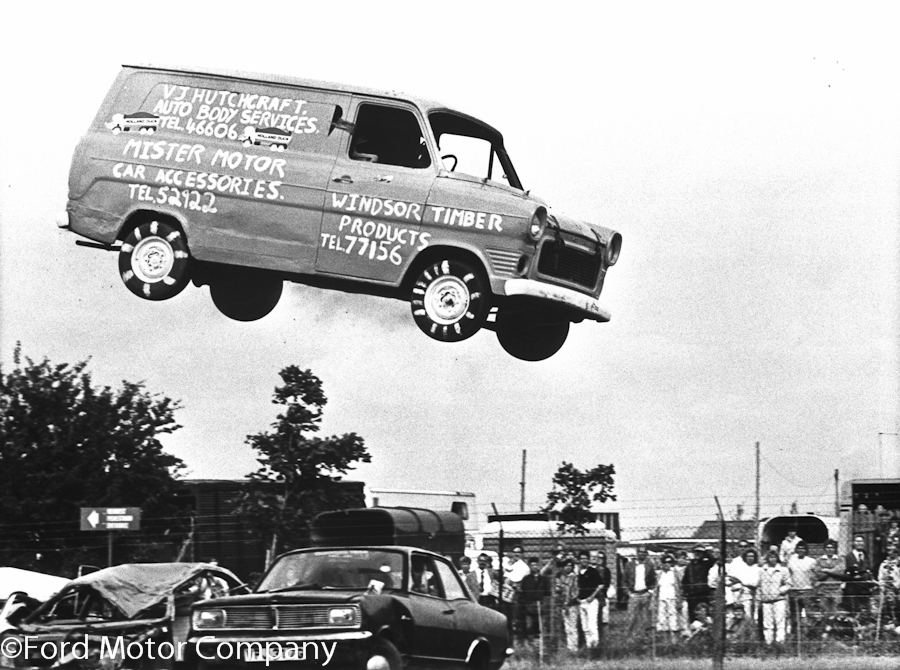 Not all gimmicks involved sport. This madness raised money for charity. 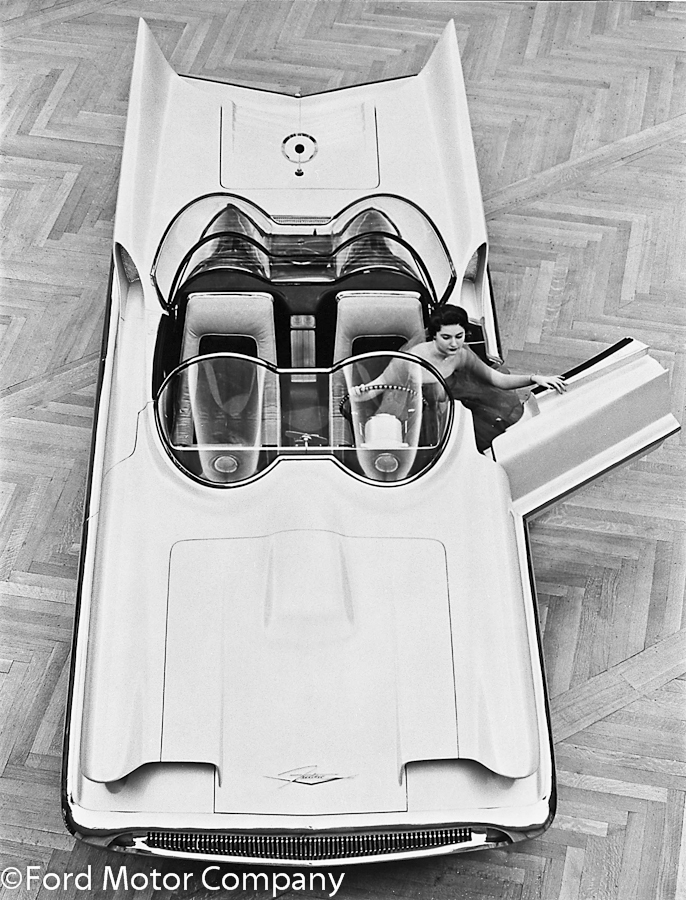 When in doubt mix a pretty girl and a concept car, covers all the bases. As Ford PR tells the story,  The Futura Concept Car was built in 1954 and designed to “garner valuable engineering data and test public reaction to styling”. A decade after its debut the Futura became the inspiration for the Batmobile in the popular 1966 television series. Although radical in appearance the Futura featured many ideas seen as mainstream today such as power-steering, power brakes, dual exhausts etc. 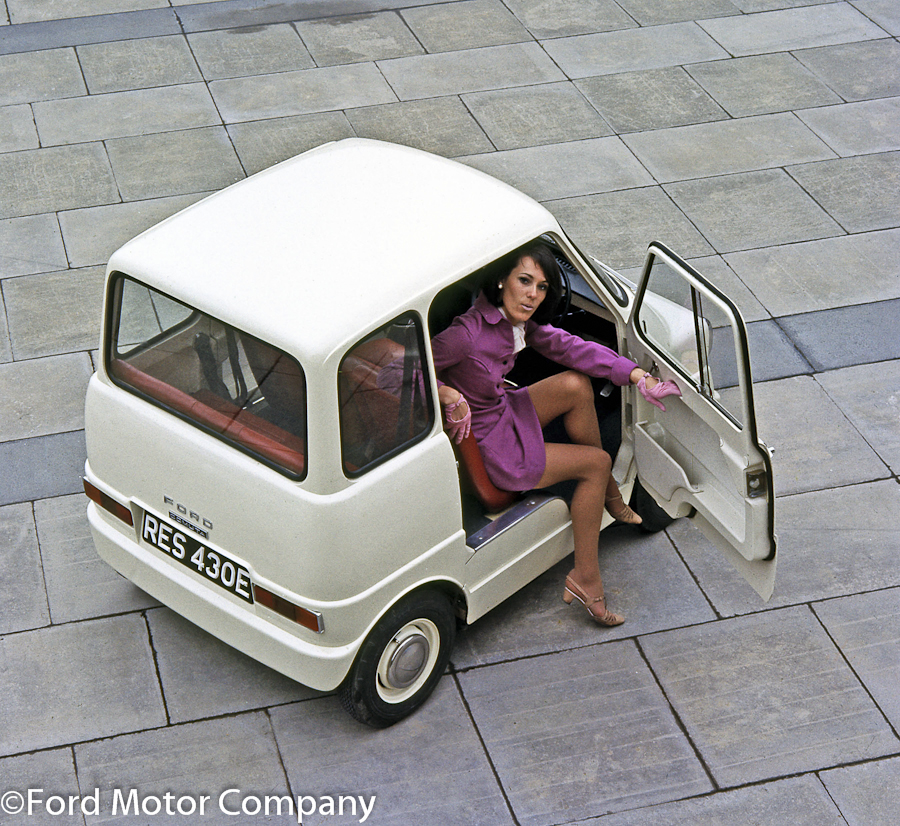 Sometimes Ford UK were ahead of a trend. In 1967 the Ford Comuta concept vehicle was used to demonstrate the potential of the electric vehicle. With a top speed of 40mph and a total range of around 40 miles on a full charge the Ford Comuta was never going to oust the best-selling Cortina as the drivers’ favourite. Even Ford’s assistant managing director at the time, Leonard Crossland recognised electric motors would not replace combustion engines for long journeys, saying: “…their uses will be primarily as city centre delivery vans and suburban shopping cars.” 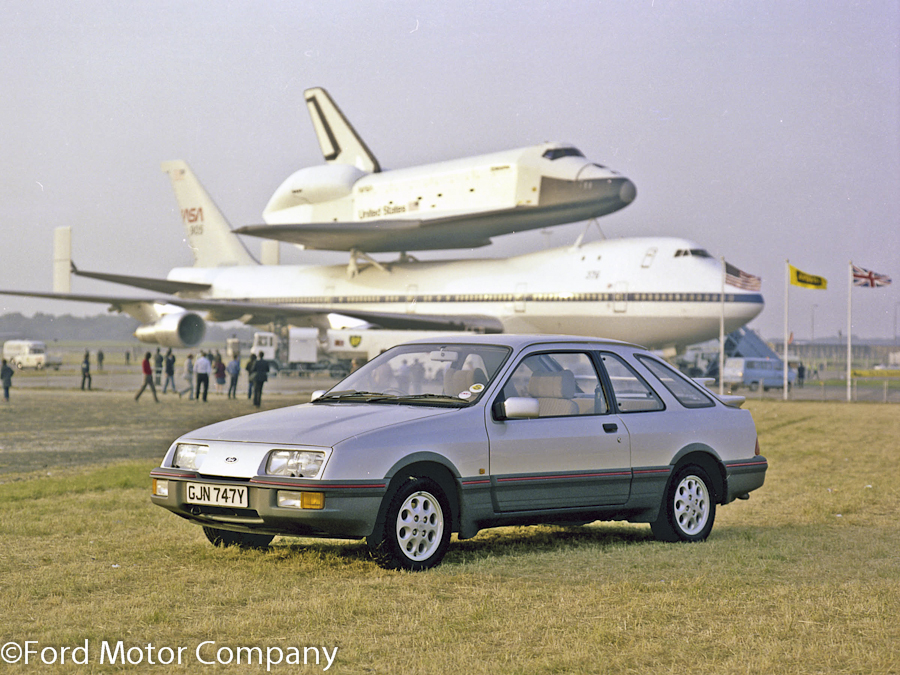 Reach for the Stars

Using the latest cutting edge technology to boost your current product line seems such a good idea at the time but in retrospect may not be quite so clever.  The Sierra and the Space Shuttle look about as 80’s as shoulder pads and yuppies. Look at how relaxed security is, it is almost as if commonsense prevails. 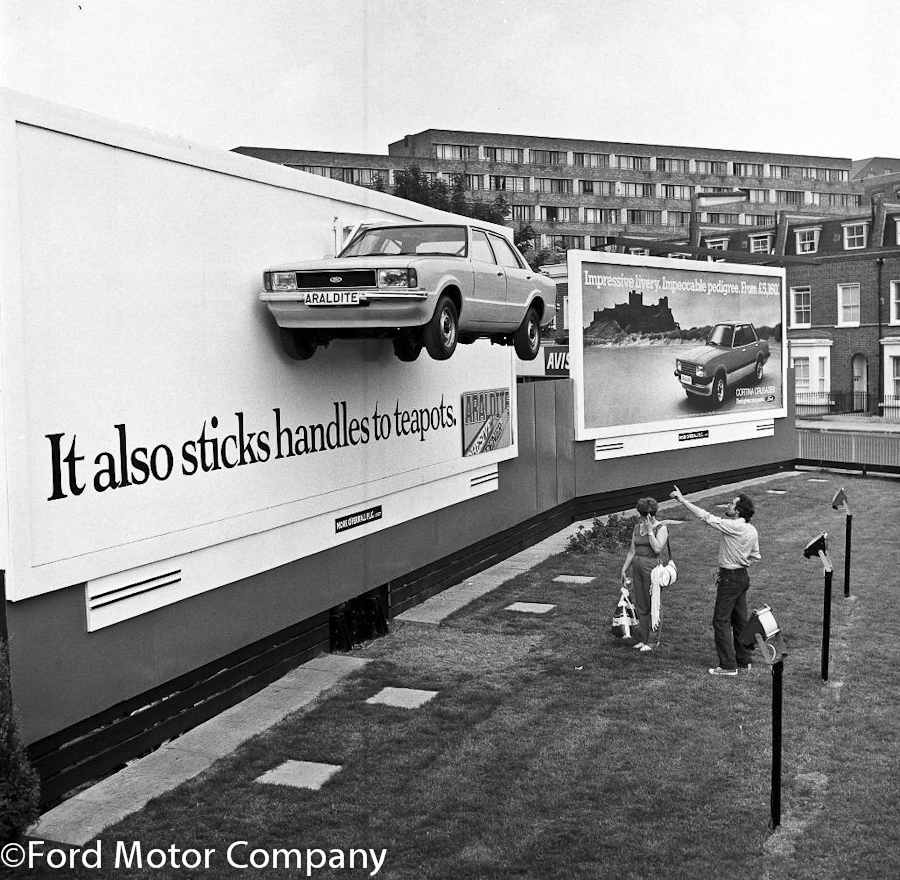 Happy Birthday, Ford UK. Britain would have been a poorer place, in every sense, without you.