Even without the flying antics, the Mercedes Benz CLR was an attention grabber. The low lines, the purity of the livery, the whole Mercedes Benzness of it all. 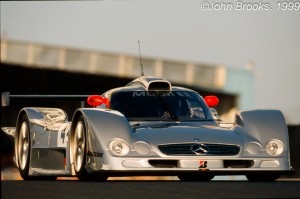 The disaster of the 1999 Le Mans meant the end of the sportscar programme for the company. Imagine how things might have turned out for the ALMS if Mercedes, Porsche and Toyota had joined BMW and Audi in North America in 1999 and 2000. Even NASCAR might have been worried.