The Special Correspondent made his annual pilgrimage to Paris and the Porte de Versailles for the Rétromobile. As might be expected there was plenty to see that was ‘Rare and Interesting’………….. 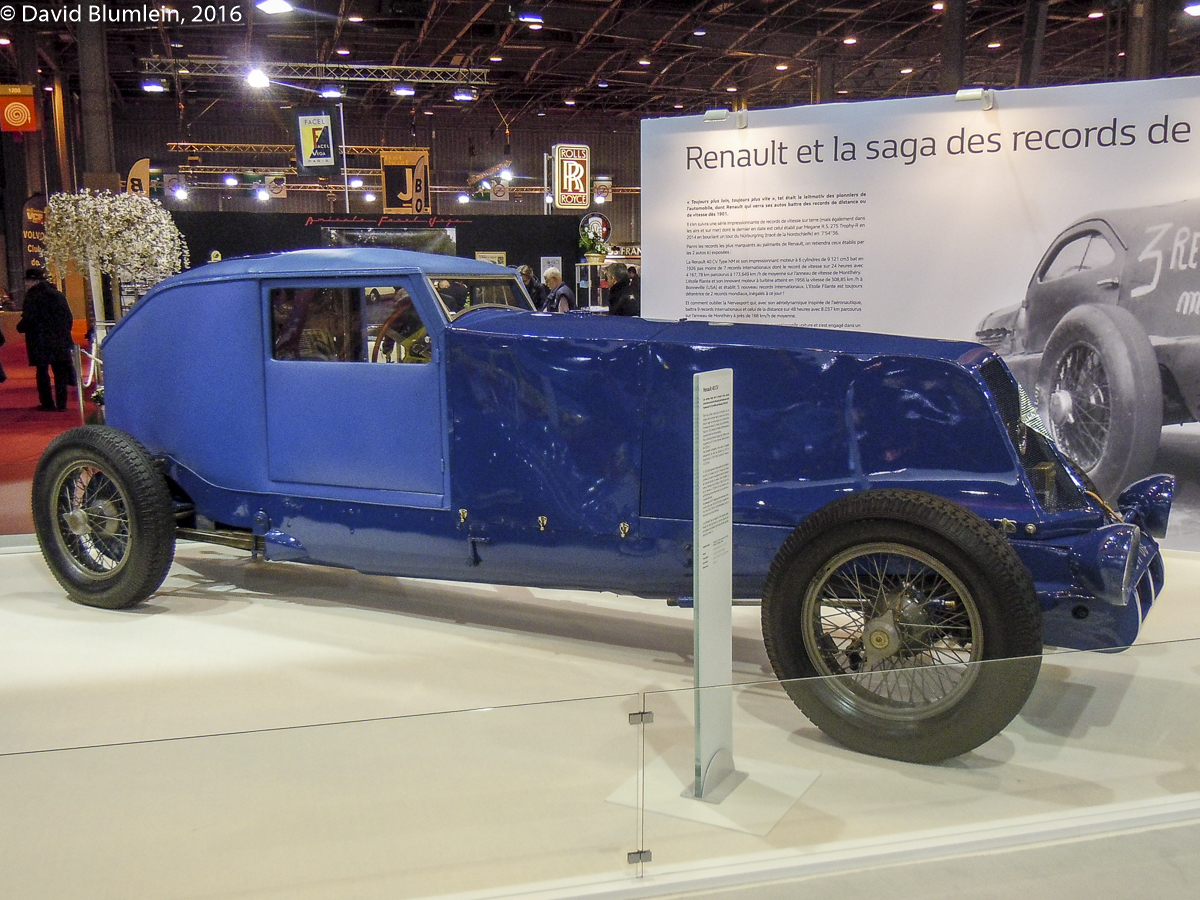 The Renault 40CV was for 20 years the top of their range. A large luxurious model, it originally came as the 50CV with a 9.5-litre engine in 1908, the company’s first six-cylinder. By 1911 it had been re-named the 40CV with 7.54 litres. The model evolved to become by 1925 the Type NM, having in the meantime acquired 9.12 litres and cantilever rear suspension. 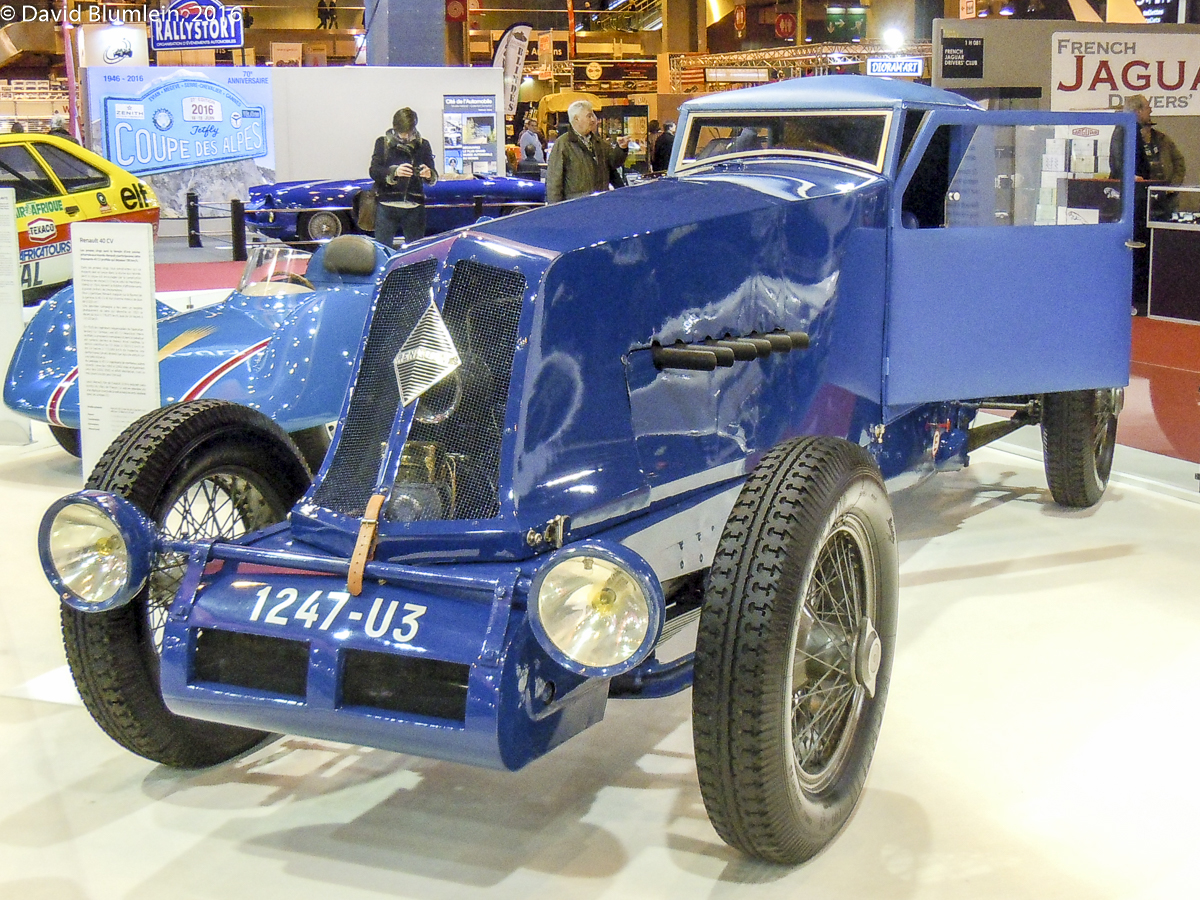 By no stretch of the imagination could the big 40CV be considered sporting but in 1925 two successes gave it something of a competition reputation. First, a private 40CV NM Weymann saloon won the Monte Carlo Rally, and then Renault decided to go for the 24 hour record, an activity that was all the rage in the inter-war years. An open 4-seater with special bodywork by Lavocat et Marsaud went to Montlhéry and on the 4/5th June duly pushed the 24 hour record up to 87.63 m.p.h. Alas for Renault, Bentley arrived in September when Duff and Barnato stole their honour by averaging 95.2 m.p.h. for the 24 hours. Not to be outdone, Renault returned in 1926 with a single-seater streamlined 40CV, a re-creation (acceptable because the original no longer exists) of which is shown here. The car boasted three carburettors for the 9.1-litre side valve six, a 55 gallon tank in the rear, a radiator behind the engine as Louis Renault insisted (and as was normal for production Renaults at the time) and provision to carry nearly 8 gallons of oil! Plessier and Garfield dutifully won back honours for Renault in the July, leaving the 24 hour record at 107.9 m.p.h 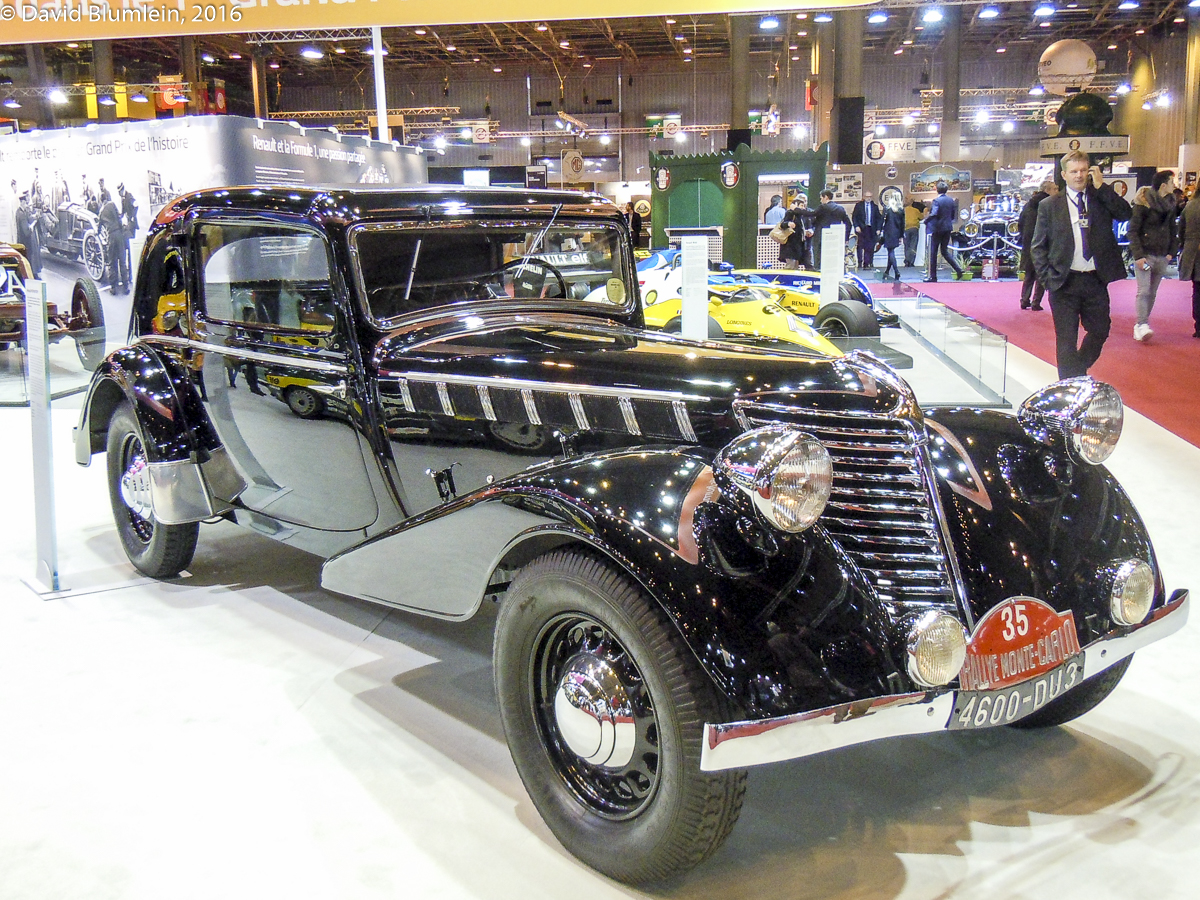 Production of the Renault 40CV was phased out during 1928 and the car was replaced at that year’s Salon de Paris by the new Reinastella, a 7.1-litre with Renault’s first Billancourt-built 8-cylinder engine and the first production Renault with a front-mounted radiator, the rest of the range soon falling into line. In 1930 a smaller Reina, the Nervastella, was introduced with a 4.2-litre 8-cylinder motor. This model soon won the Rallye du Maroc (taking the first three places) and it was followed in March 1932 by the Nervasport, a shorter, lighter version. In 1934 the engine size went up to 4.82-litres and then at the end of the year to 5.4-litres. This Nervasport dates from 1935 and commemorates the model’s outright win in the 1935 Monte Carlo Rally. 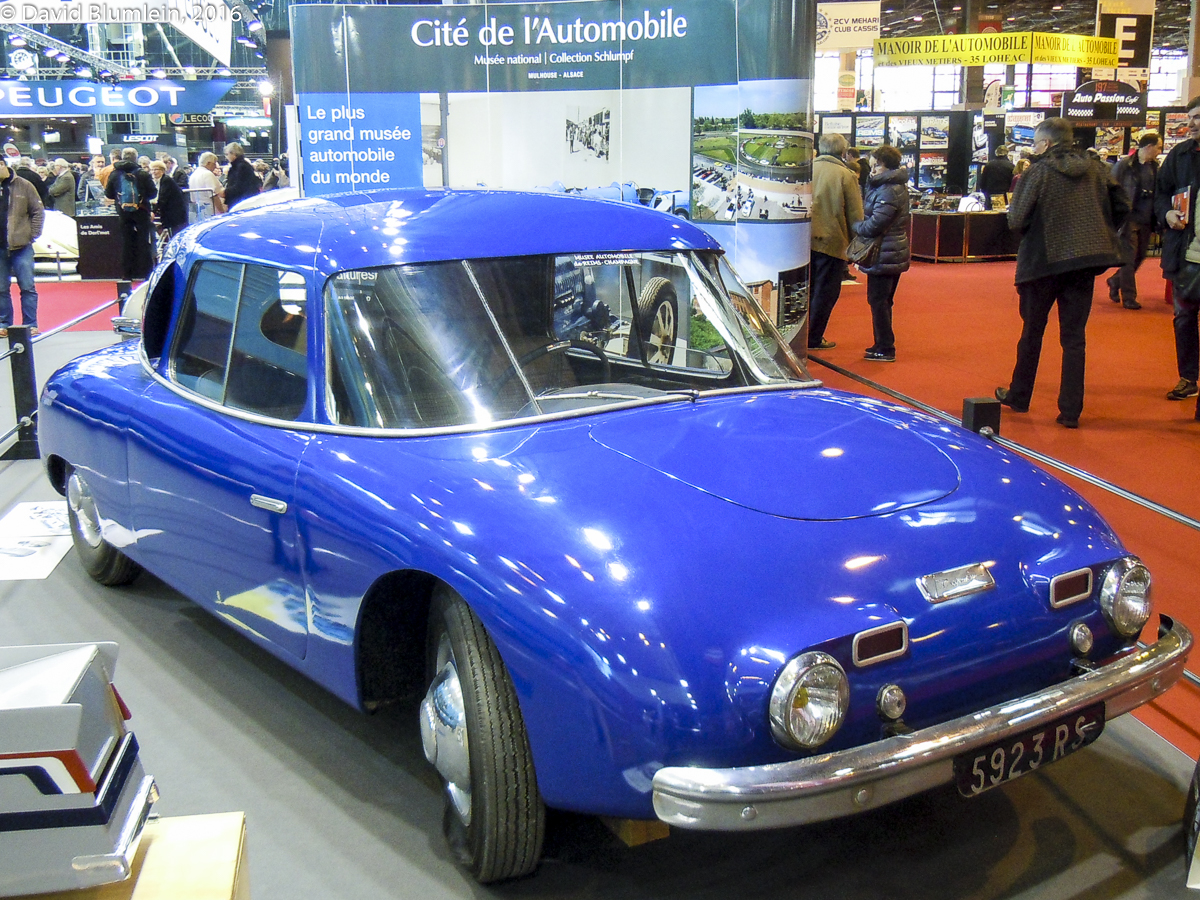 Jean-Pierre Wimille was one of France’s greatest racing drivers. During the war (while working for the Resistance as a member of the Special Operations Executive) he planned a car (La Wimille) that would set modern trends for the post-war era: tubular chassis, mid-mounted engine, central driving position with three seats (recalling the 1936 Panhard Dynamic), aerodynamic bodywork and panoramic vision. 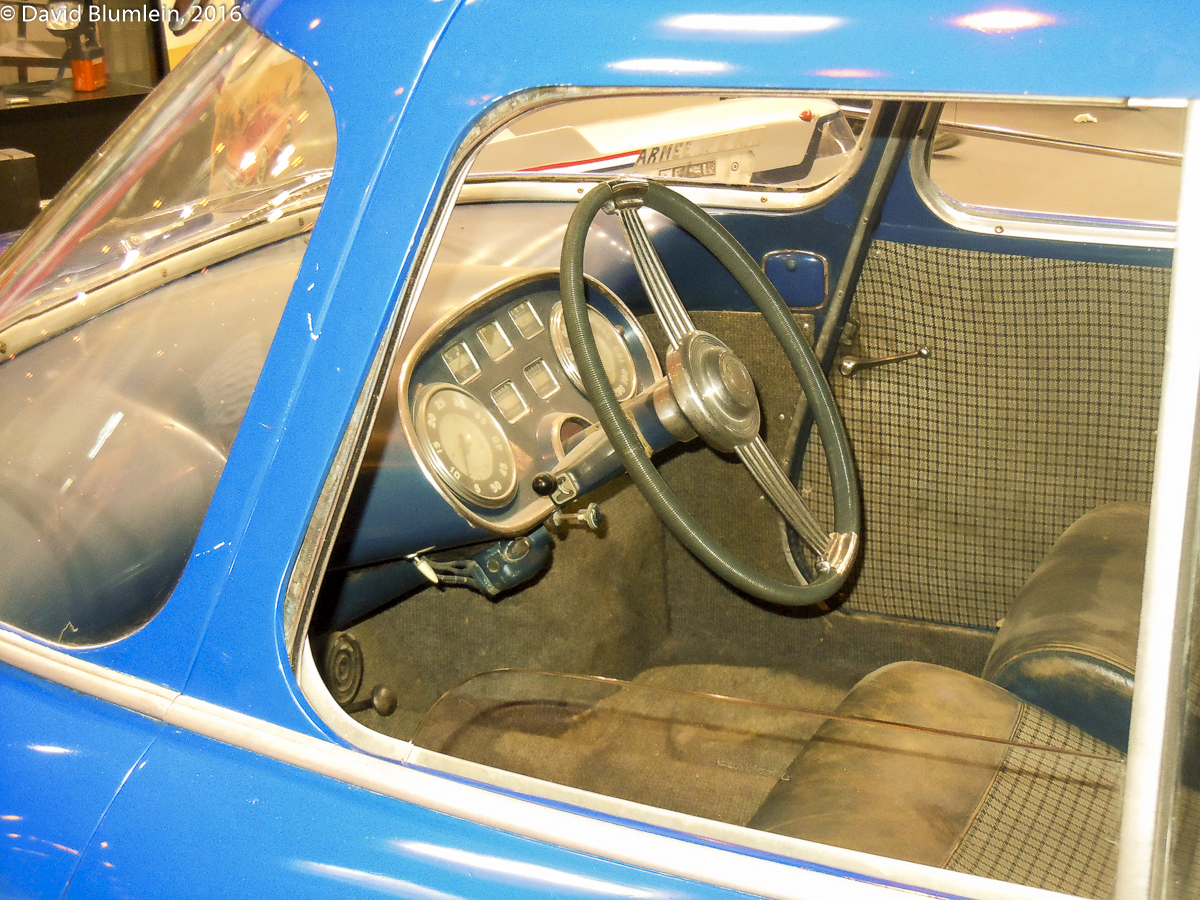 The first prototype, with 11CV Citroën four cylinder engine, was built in 1945 and made its first public appearance at the occasion of the Grand Prix de l’Autoroute de l’Ouest on 9 June 1946 at St Cloud where Wimille first drove the Alfa Romeo 158. Other prototypes followed with bodywork designed by Philippe Charbonneaux and powered by a Ford Vedette V8 engine. 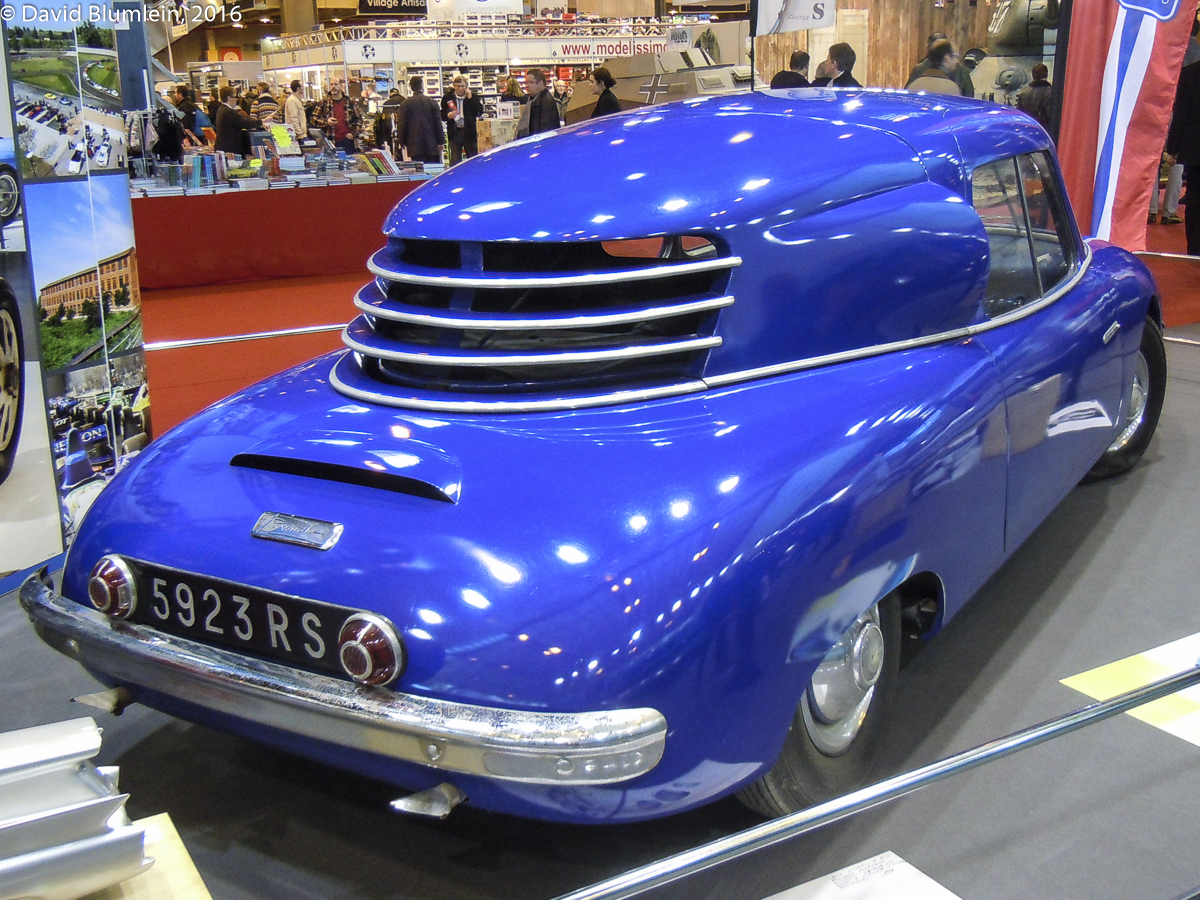 Shown is the third prototype but the whole project came to nought, alas, when Wimille was killed in practice for the 1949 Buenos Aires Grand Prix in a Simca-Gordini. 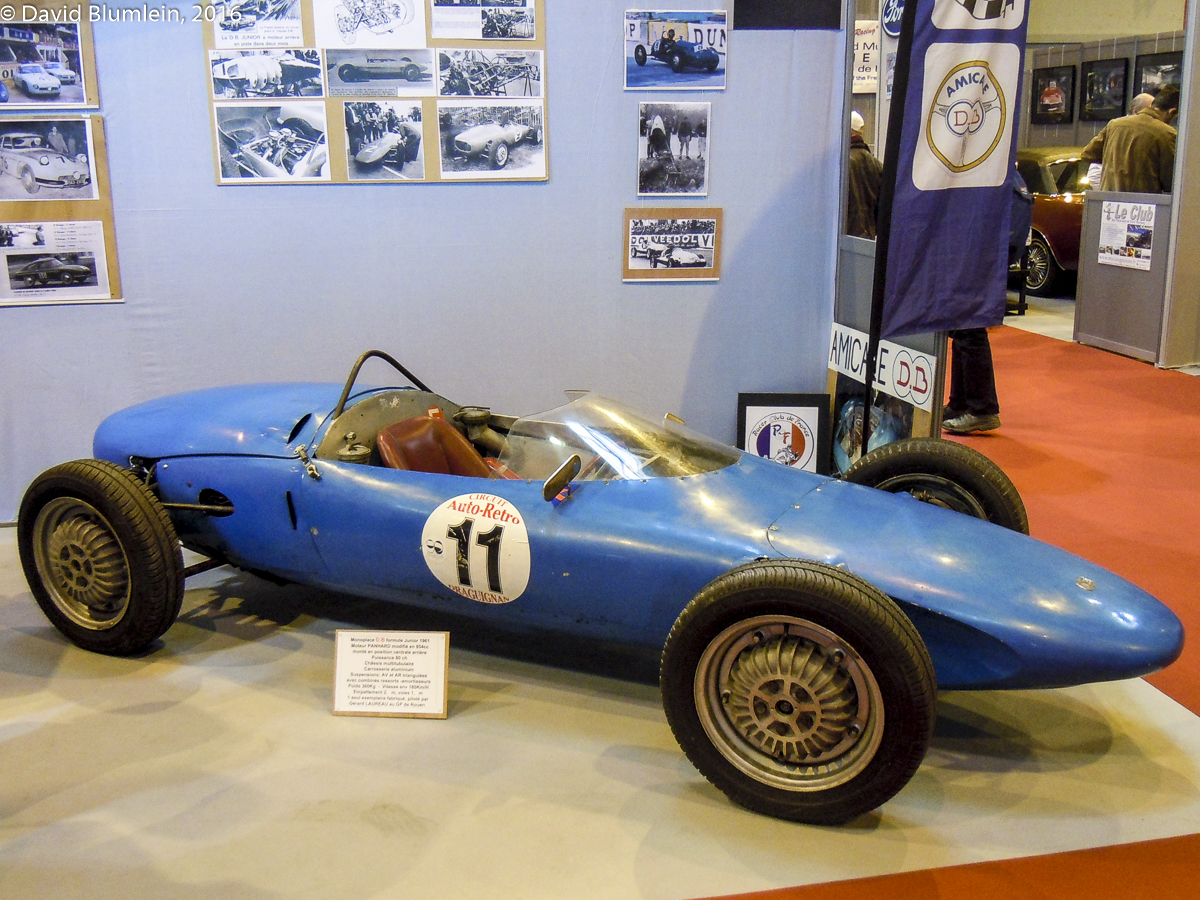 Pictures DSCN 3510, 3504, 3505
In 1961 Deutsch and Bonnet (DB) followed the then current trend towards mounting the engine behind the driver – all the result of Cooper’s Formula One World Championship successes in 1959 and 1960. 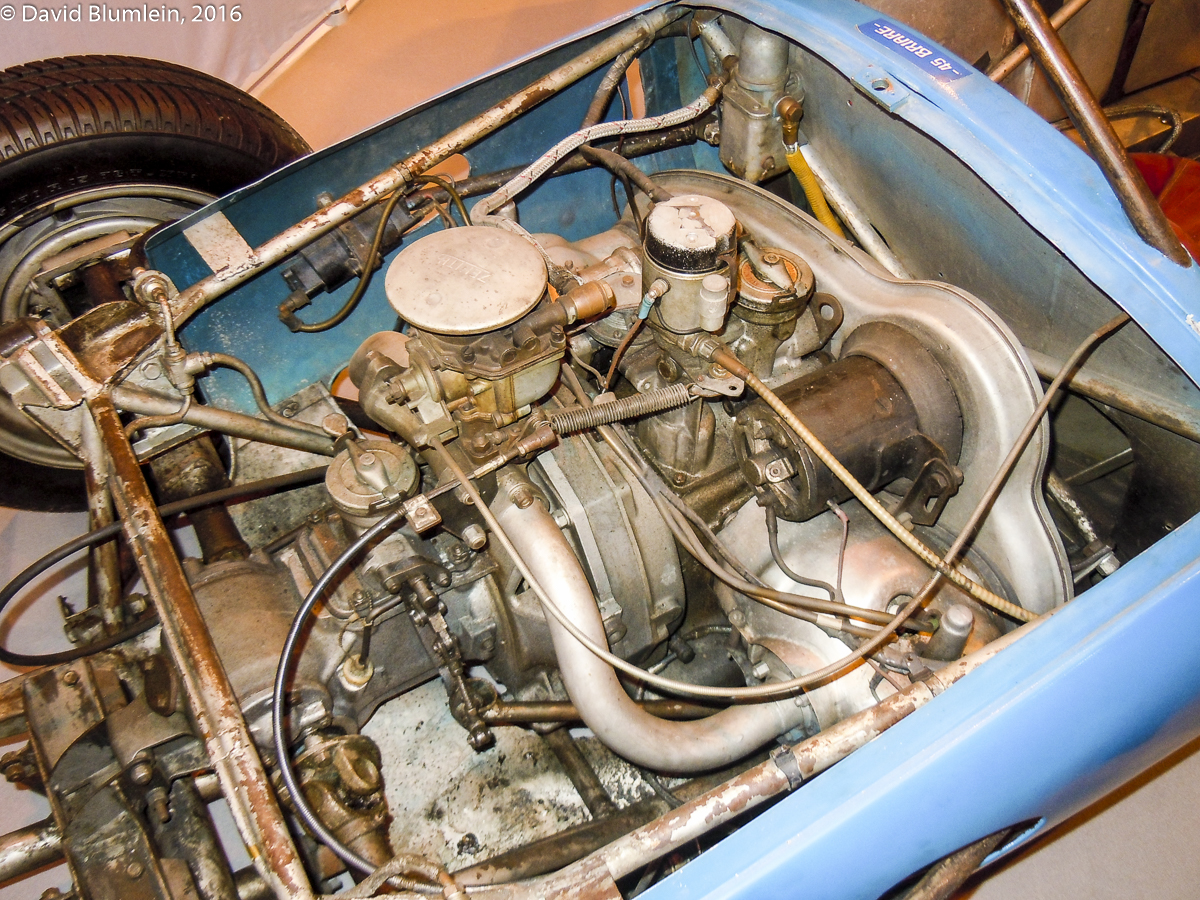 A DB was run in that year’s Le Mans with the Panhard engine so positioned (finishing 19th). 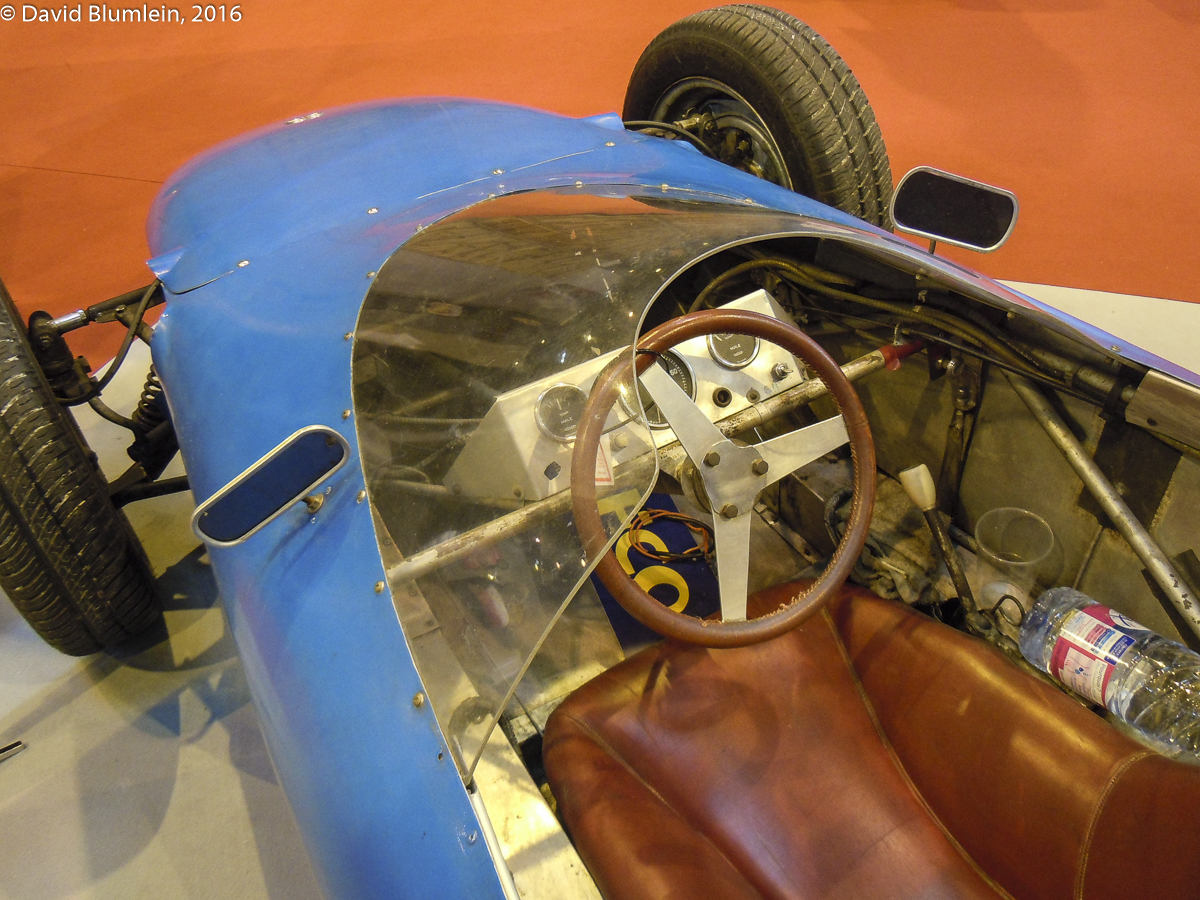 DB also made a Formula Junior racer with the Panhard engine ( modified to 954 c.c.) duly mid-mounted. It was entrusted to Gérard Laureau for a race at Rouen where it was outpaced and never raced again. The pictures show the one such car that was ever made. 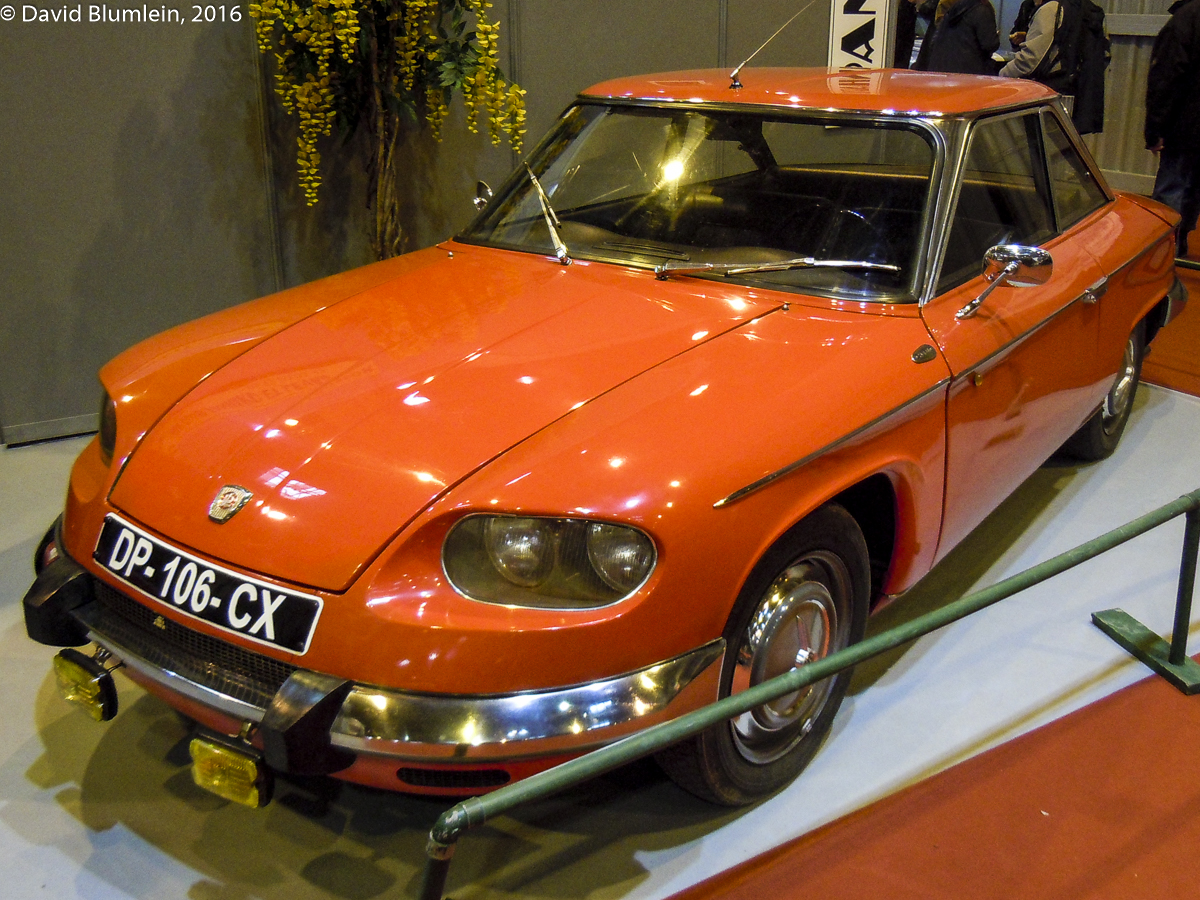 It is always a pleasure to see a Panhard CT 24. This was the last model of this famous firm which was one of the very first to produce motor cars. Still powered by Louis Delagarde’s amazing flat- twin, its aerodynamics gave it a respectable performance but Citroën had taken over at the Avenue d’Ivry and killed off car production in 1967. 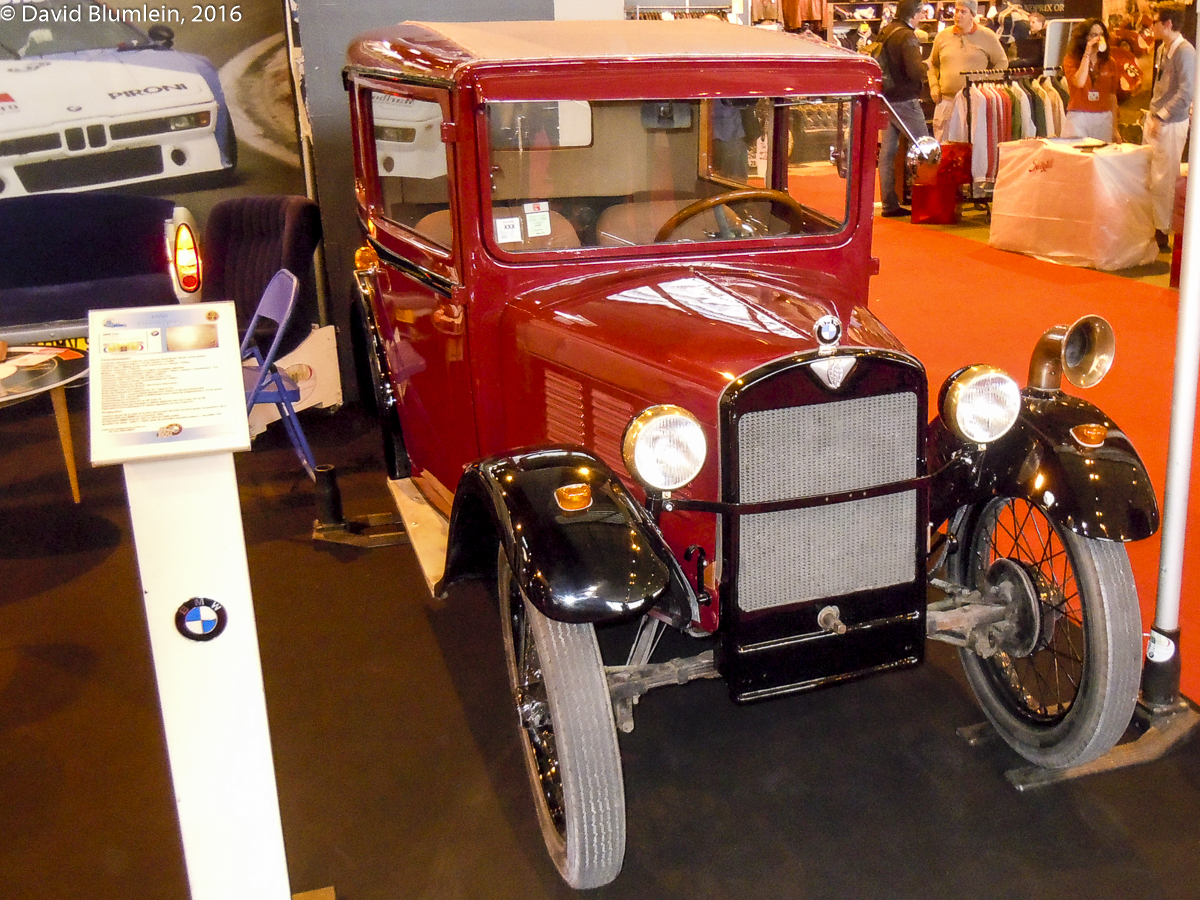 BMW broke into car production when it bought the Dixi car company in 1928. This Eisenach firm had been making Austin Sevens under licence and BMW initially took on this rôle, steadily developing the cars according to their thinking. Here is a 1931 BMW 3/15 DA4 model still with the 743 c.c. engine but the bodywork is by Ambi-Budd of Berlin and , although it still looks like Sir Herbert’s baby. But notice…it has independent front suspension, something no “real” Austin Seven ever had! 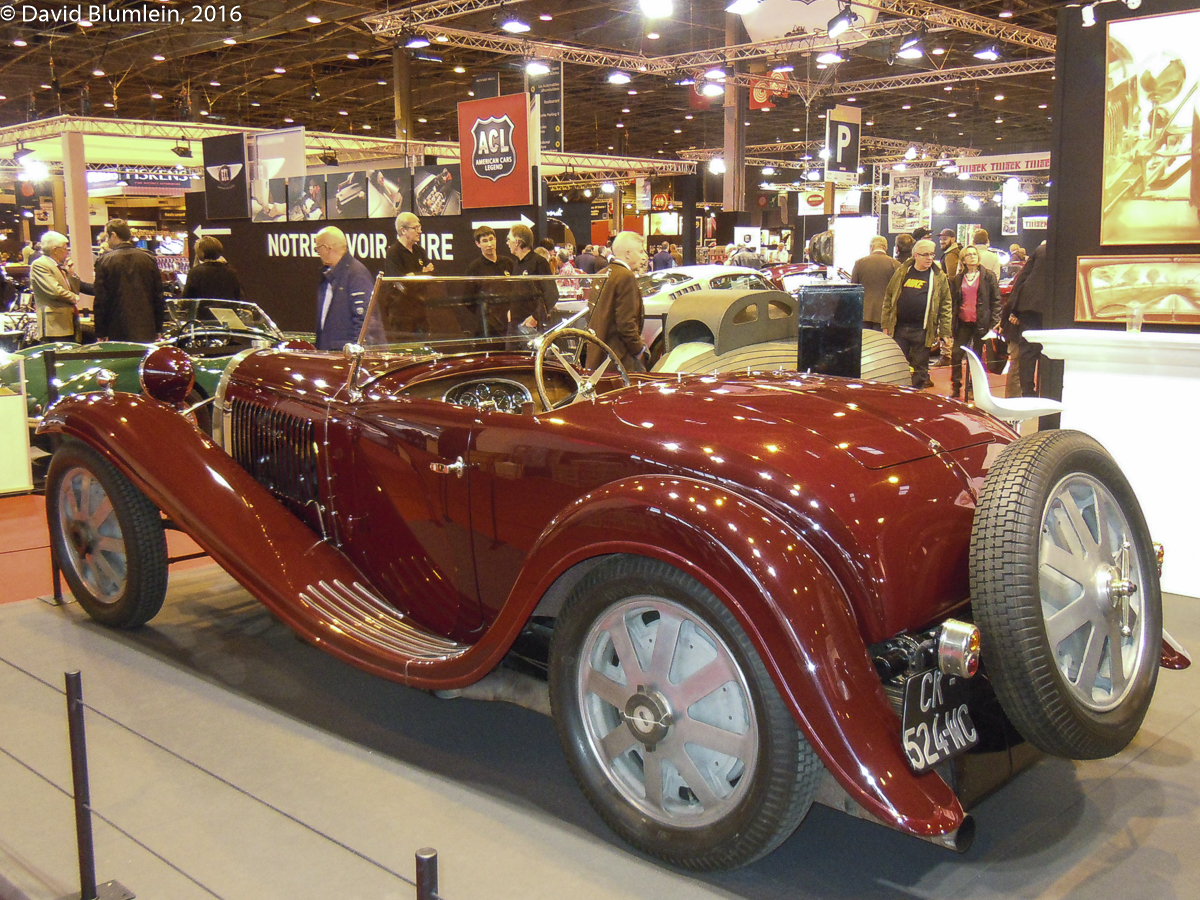 This is the beautiful Bugatti T55, the body design the work of the talented Jean Bugatti. The model, which appeared for 1932, was the true successor to the T43 and , just as that car had used the T35B Grand Prix engine , so the T55 was powered by the T51’s 2.3-litre twin overhead camshaft unit. 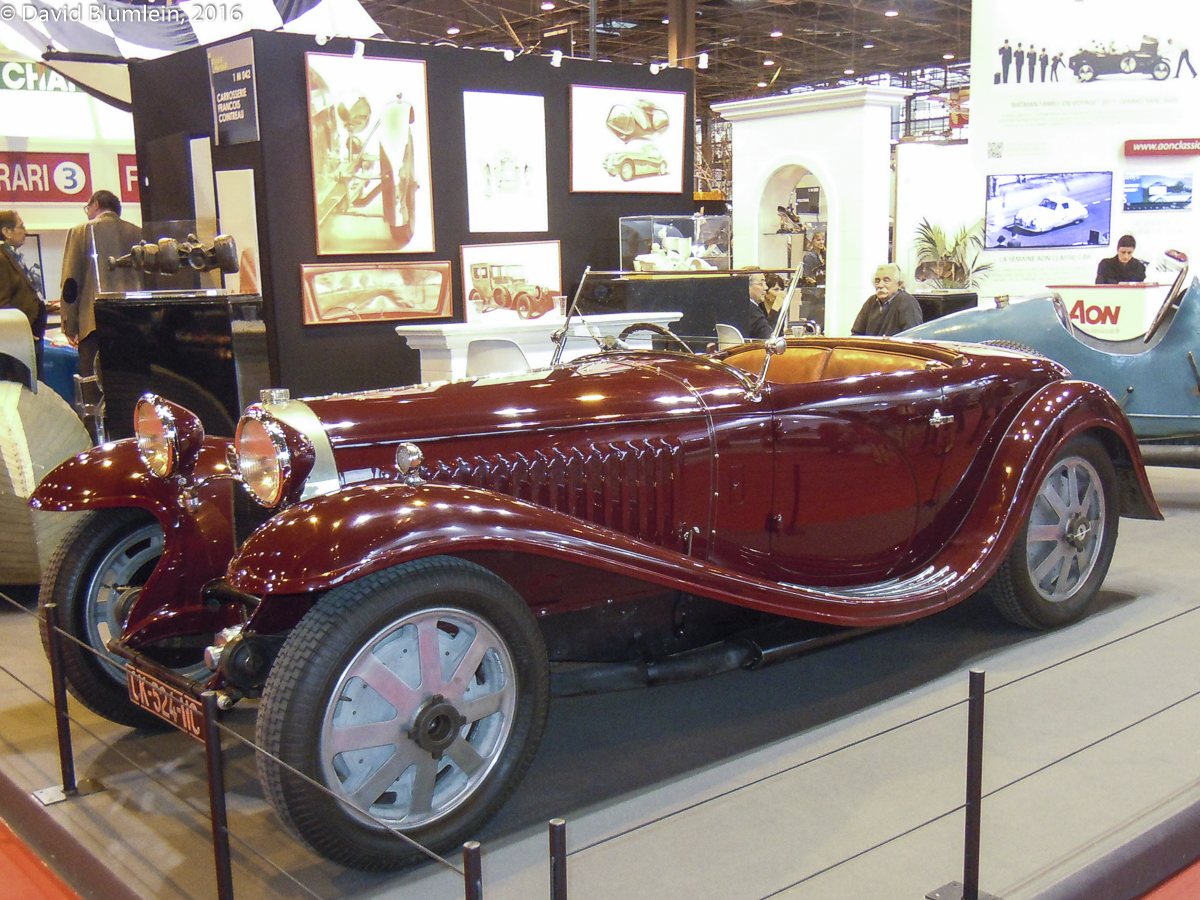 Surprisingly, neither of these cars achieved real success in the international sports car racing; Bugatti had to wait for the T57’s variants to stamp Molsheim’s name on Le Mans etc.
TAILPIECE 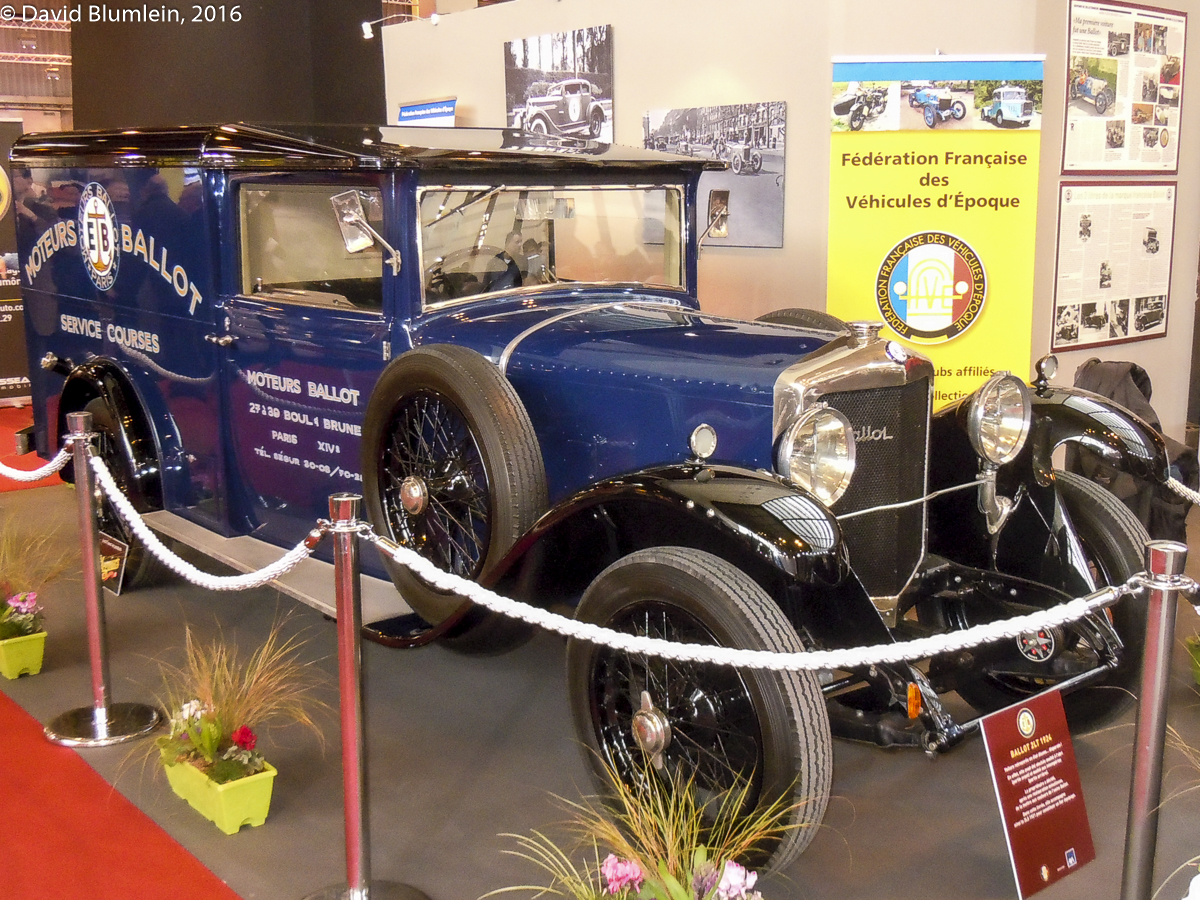 Ets Ballot made engines (it was one of several French companies to produce the Hispano Suiza V8 aero engine) and after the Great War it built some racing machines with Henry-designed twin o.h.c. motors, competing at Indianapolis in 1919 and the French Grand Prix in 1921 and 1922. This design was used in the exciting sports 2LS and this van, based on the 2LT with single o.h.c., has been restored to represent a “works” version.