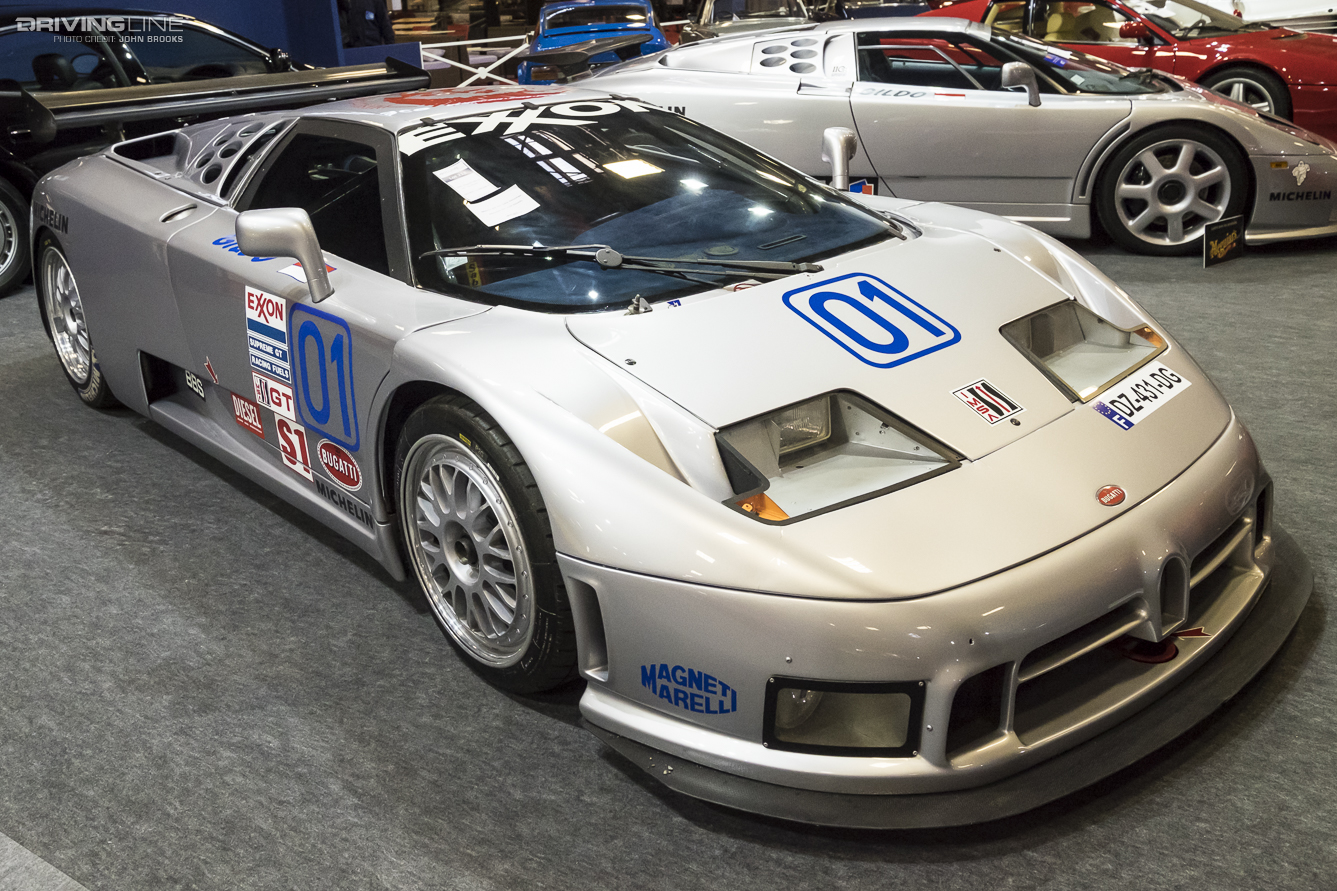 Name the odd one out – Maserati, Ferrari, Lamborghini, Pagani, Bugatti, Lancia, Alfa Romeo. Easy I hear you cry, Bugatti! – Though Ettore Bugatti was born in Milan almost all of the cars that bore his name were built at Molsheim in the French province of Alsace. Since the acquisition of the marque by the Volkswagen Group production has returned to Molsheim. The rest are all Italian car companies so that is that. 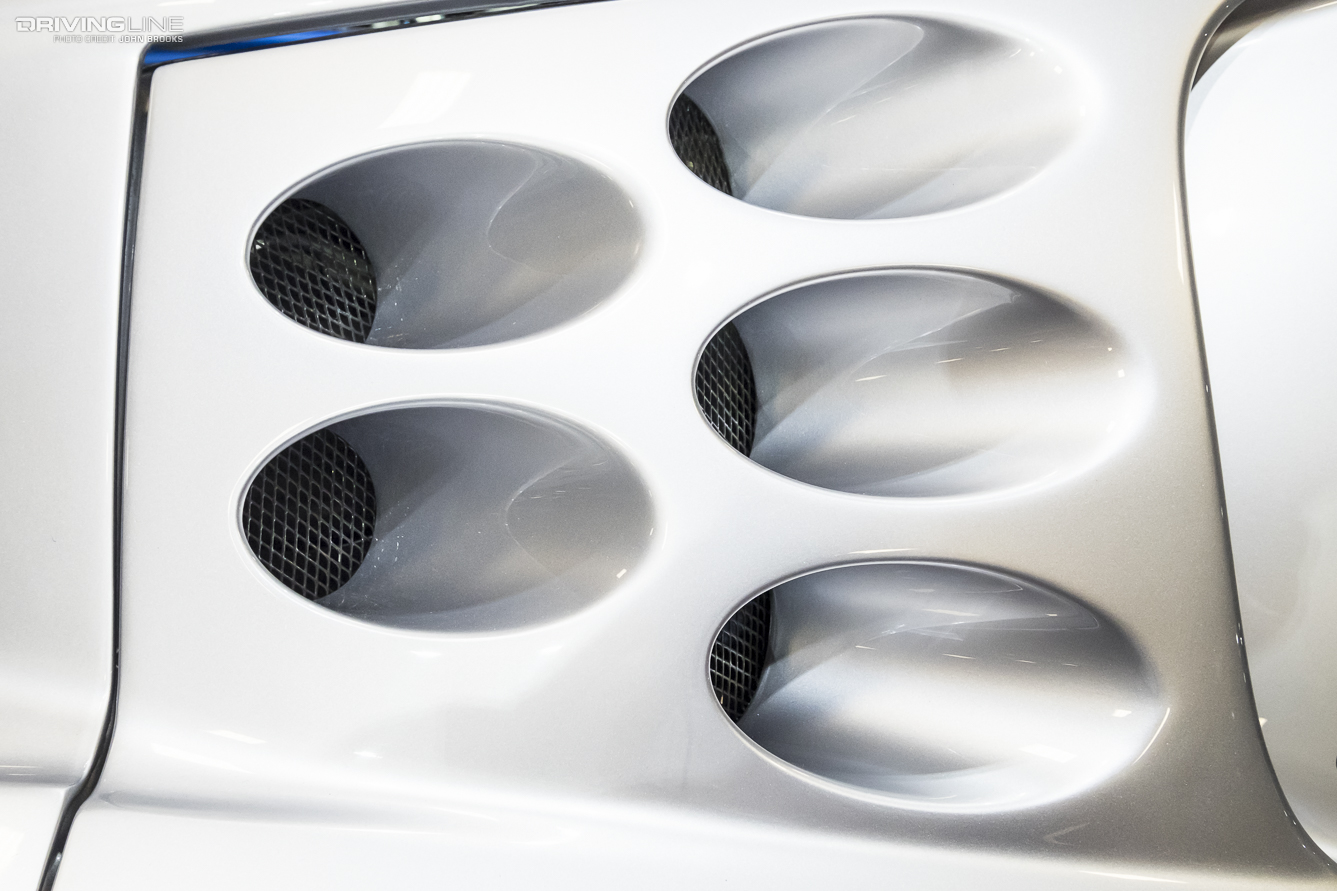 However, there was, some 30 years ago, an attempt to revive Bugatti and locate it in the shadow of Modena (where else in Italy?) at a purpose built factory in Campogalliano. The author of this plan was Italian automotive entrepreneur Romano Artioli who somehow persuaded the French state-owned industrial conglomerate, Snecma, to sell him the rights to the brand of Bugatti, succeeding where so many others before him had failed. Perhaps he made them an offer they could not refuse. 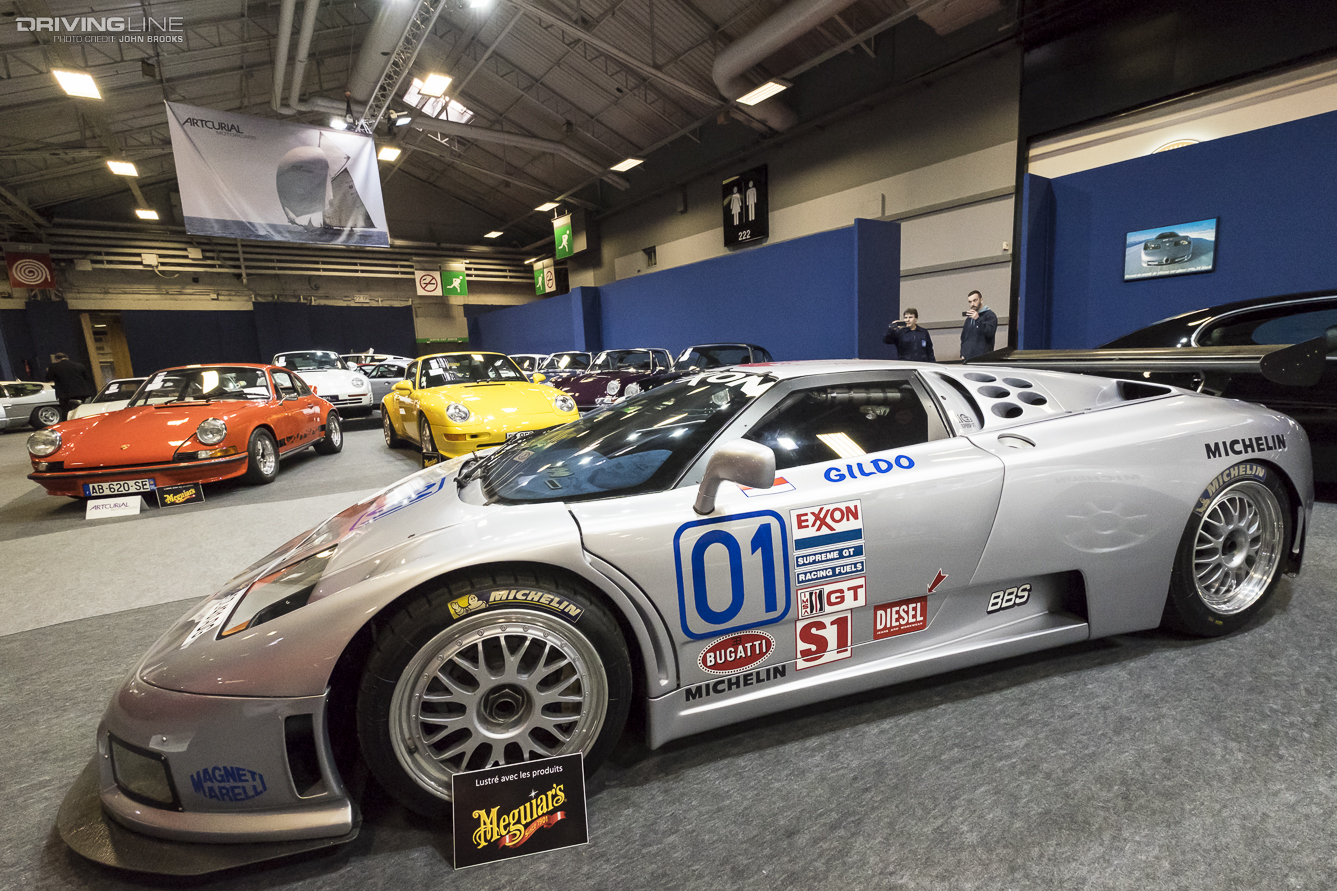 Artioli had a vision of the car he wanted to create, this had been hatched over several years with an old friend, Ferruccio Lamborghini, yes that Lamborghini. This was going to be the fastest, greatest car in the world and to achieve this aim Artioli recruited some of the stars of the local auto industry. Designer Marcello Gandini was a logical choice given his record with such supercars as the Alfa Romeo Montreal, De Thomaso Pantera, Ferrari Dino 308GT4, Iso Grifo, Lamborghini Miura, Lamborghini Countach, Lancia Stratos and Maserati Khamsin plus many others. The technical side was handled by Paolo Stanzani who drew up the initial concept of a two seater mid-engined sportscar with four-wheel drive, powered by a 3.5 litre V12 with four turbochargers giving over 600bhp in extreme form. Chassis were initially planned to be aluminium but this lacked the necessary rigidity so French aeronautics experts, Aérospatiale were called upon to develop and build a carbon fibre unit. 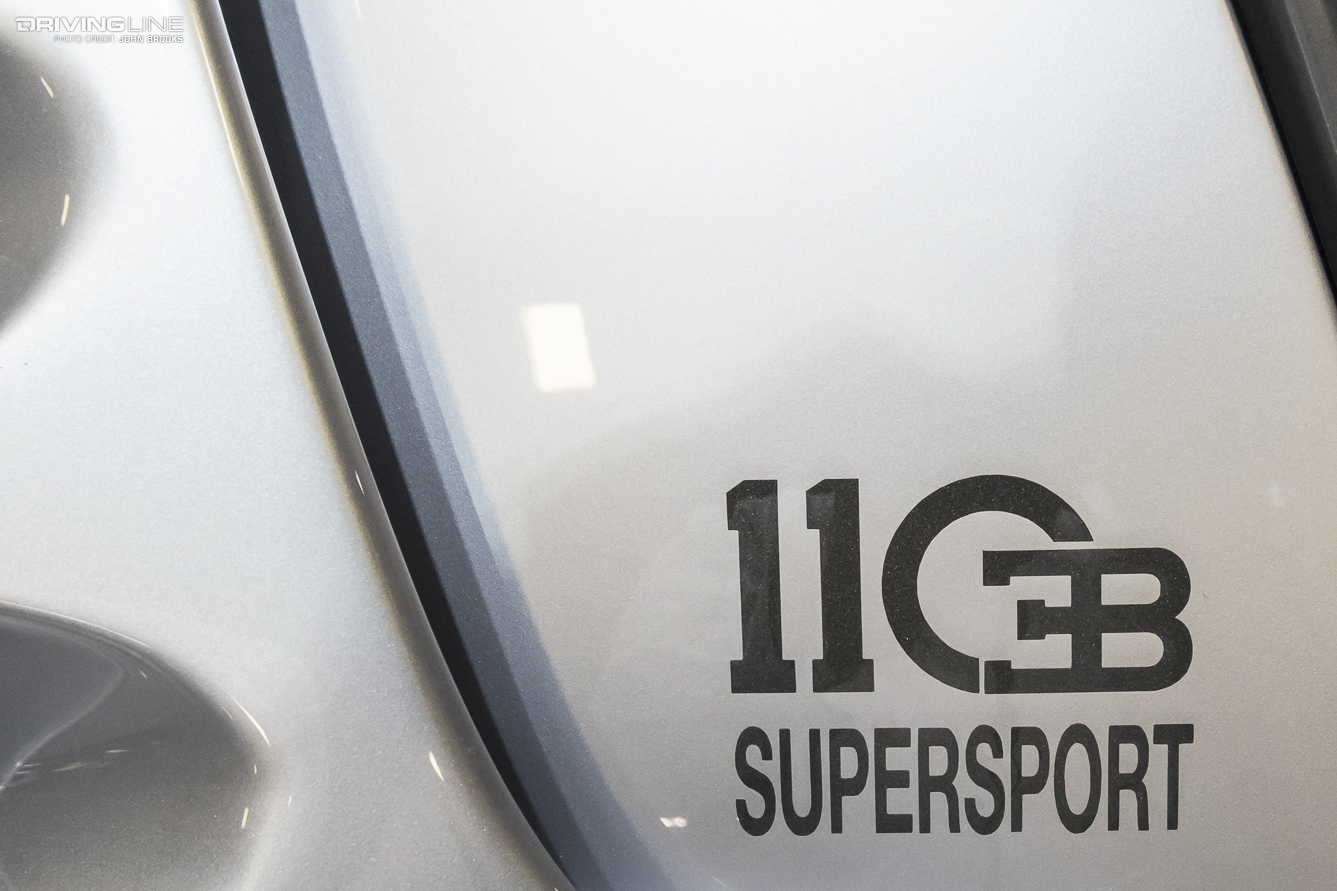 Artioli managed to fall out with both of his project leaders prior to launch but the EB110GT continued its development and during this period recorded a record speed of 212.5mph, making it the fastest production car on the planet. The EB110GT was launched in 14th September 1991 at La Grande Arche de la Défense to the west of Paris to a crowd of 5,000 media and guests. The date was the 110th anniversary of Ettore Bugatti’s birth and 1,800 VIPs celebrated into the night at a sumptuous reception and dinner at the Palace of Versailles. 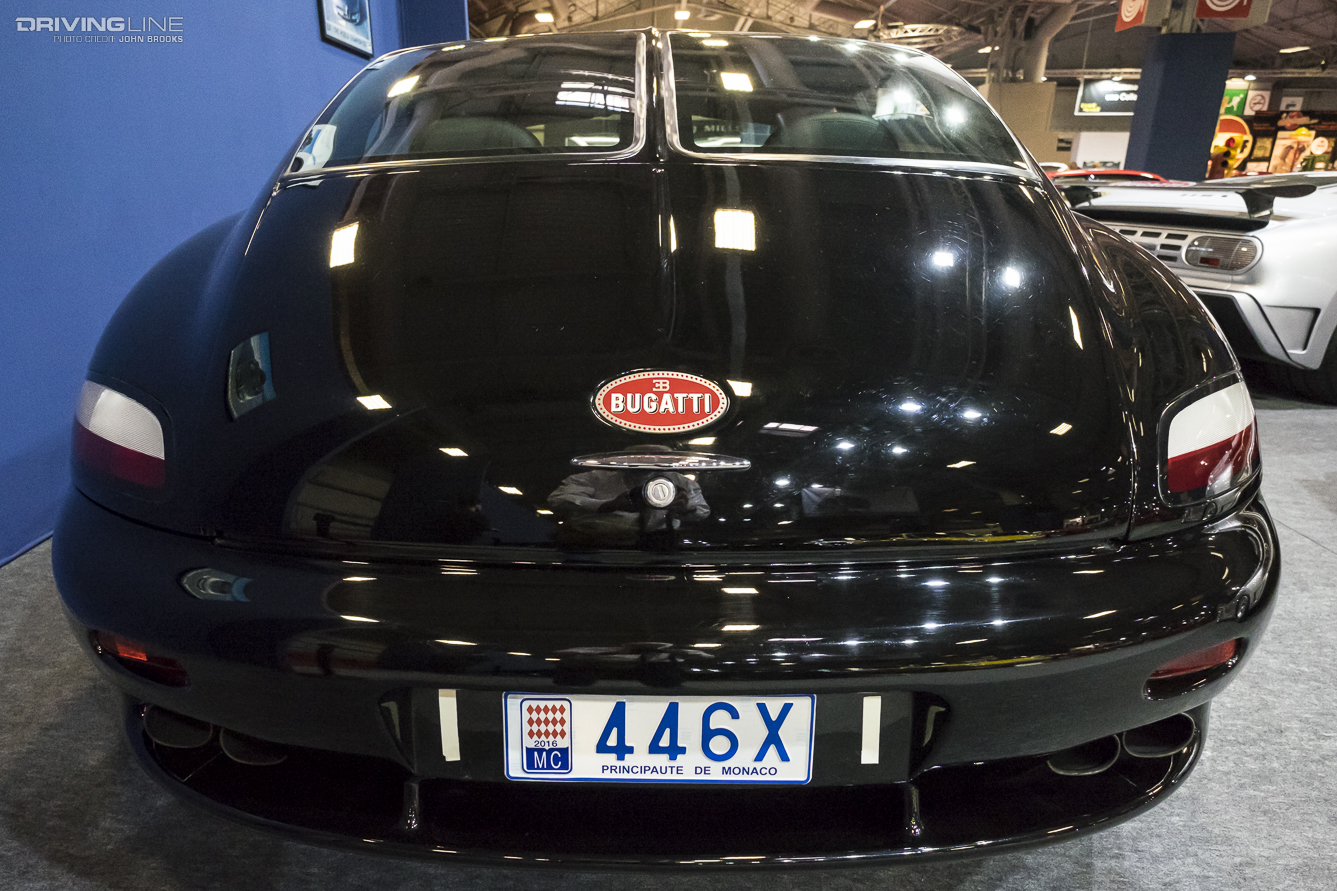 Such extravagance set the tone and were to have consequences particularly as there were cost overruns at Bugatti and, to compound matters, Artioli acquired Lotus Cars from General Motors. He also launched the Ettore Bugatti fashion brand, all of this funded by a combination of personal wealth and borrowings. Artioli’s luck deserted him, his principal income streams, a large Ferrari dealership and being Suzuki’s agent in Italy, were experiencing difficulties with the general economic situation and the financial crisis that hit Japan at that time. Two other factors worked against the EB110GT, failure to get a foothold in the vital North American market and the arrival on the scene of the McLaren F1 which took SuperCar performance levels to a new dimension. 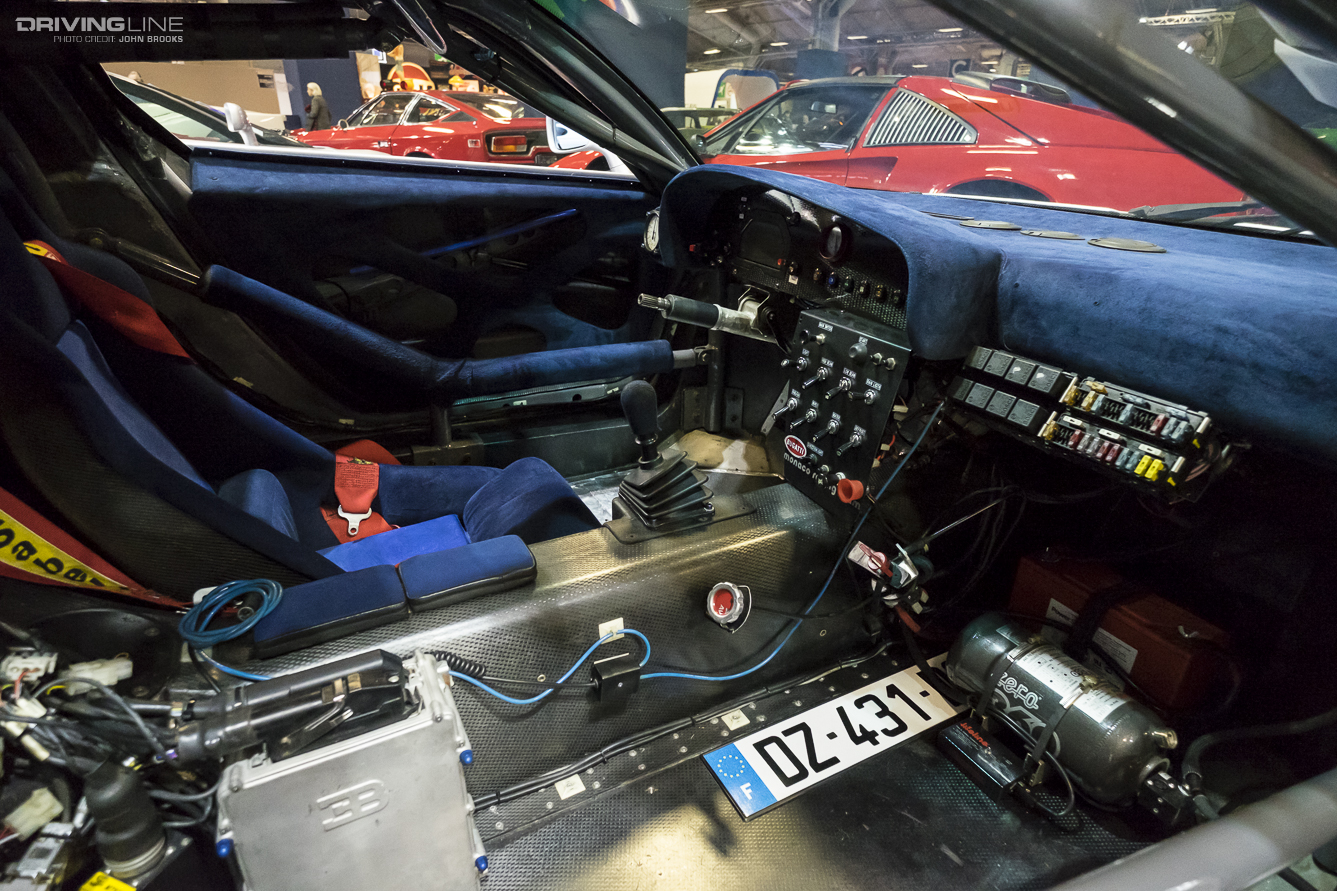 In an attempt to drum up business in the face of the new arrival from Woking an even more extreme version of the EB110 was launched, the Supersport, but it was too little too late. The planned output of 300 units per annum was never achieved and in the end only 140 cars were built, including 38 Supersports. 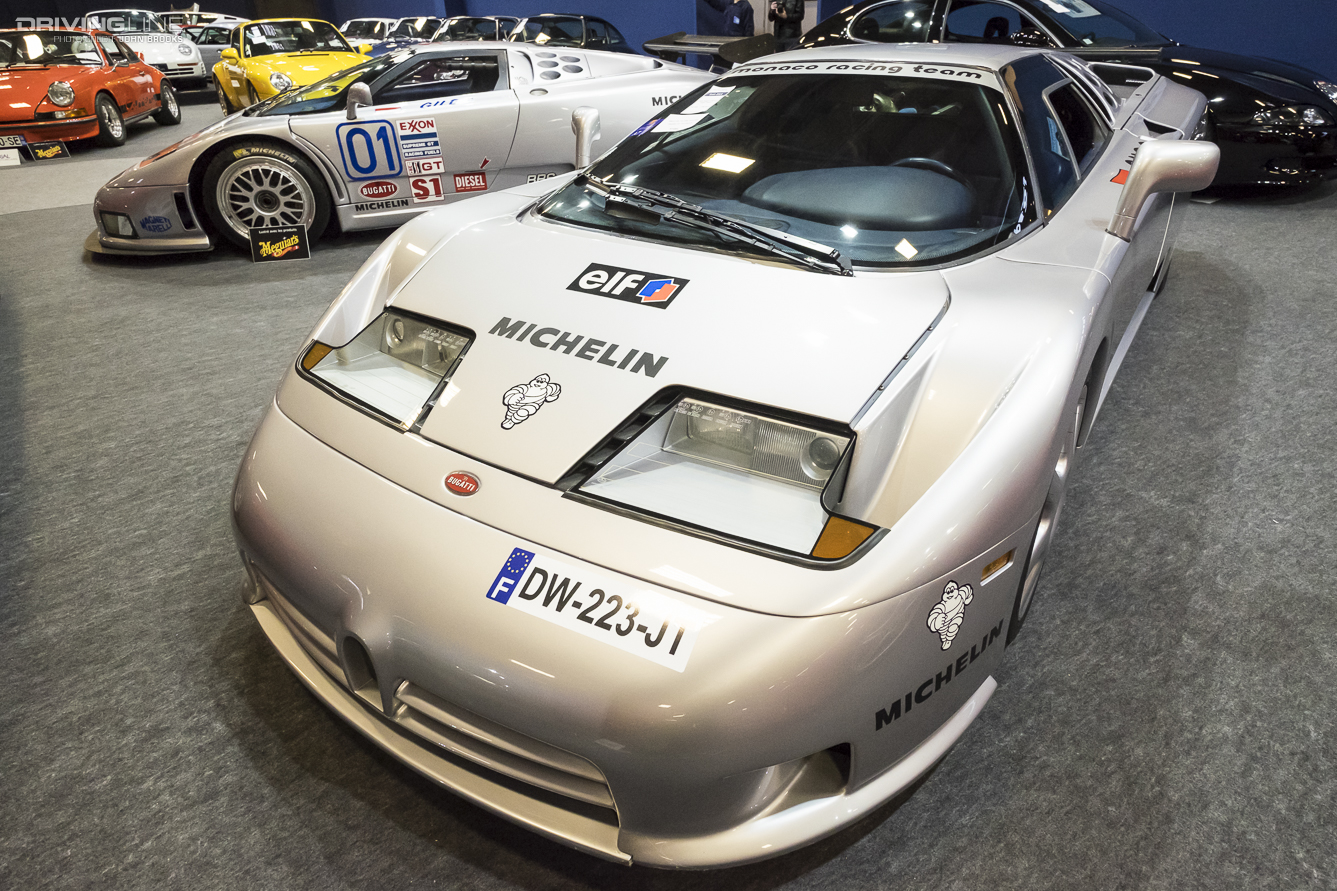 The end for Artioli’s Bugatti dream came in September 1995 when the corporation was declared insolvent with debts of $125 million, eventually after a couple of years of financial and legal wrangling the Volkswagen Group acquired the Bugatti brand. The Veyron was the next exotic chapter in the story of Bugatti and the recent launch of the Chiron at the Geneva Salon points to the future. 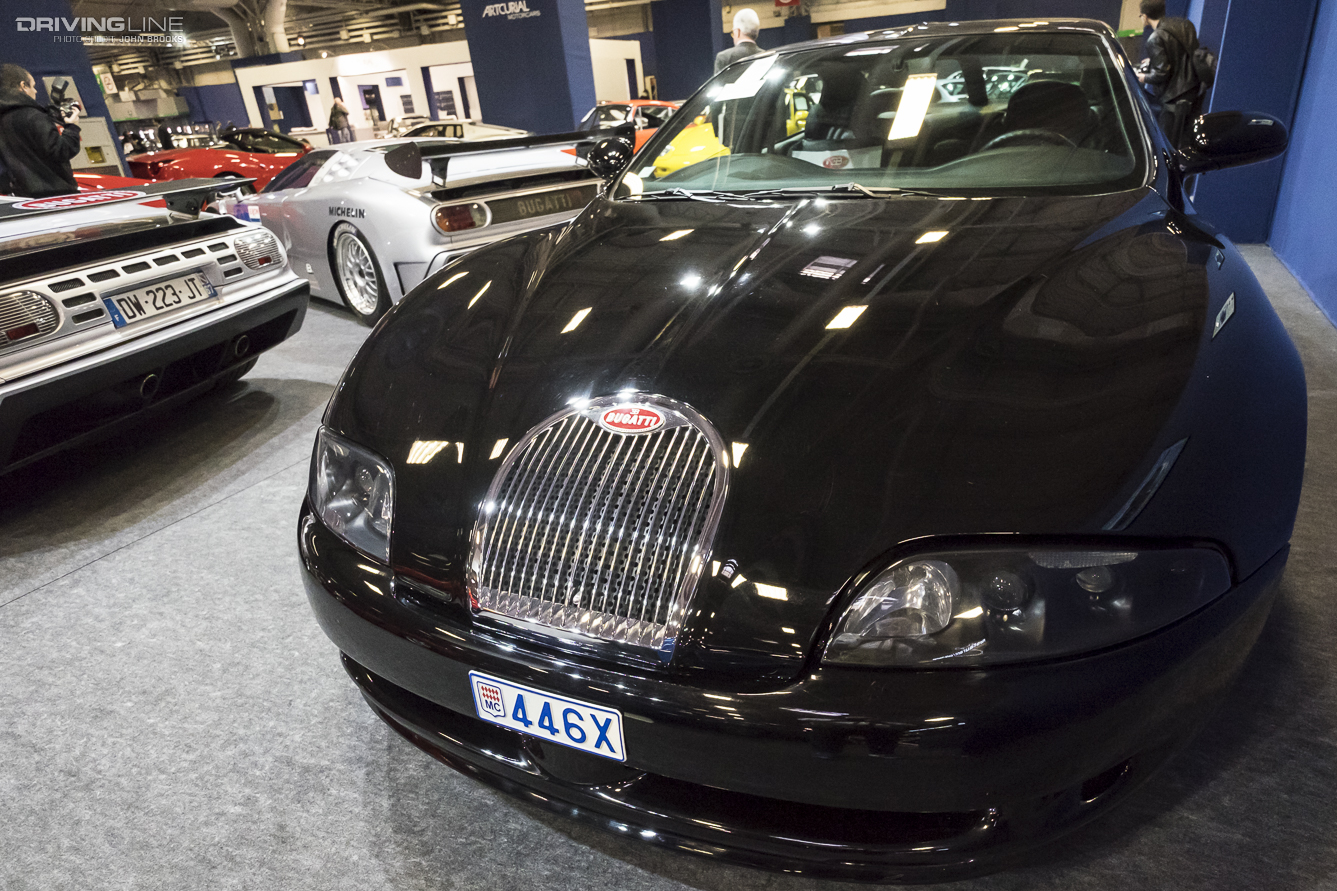 So the EB110 is a rare beast, so to encounter two of the Supersports sharing the same stage is highly unlikely scenario, that they were in the company of a prototype EB112 saloon is even more so, this is hen’s teeth territory. 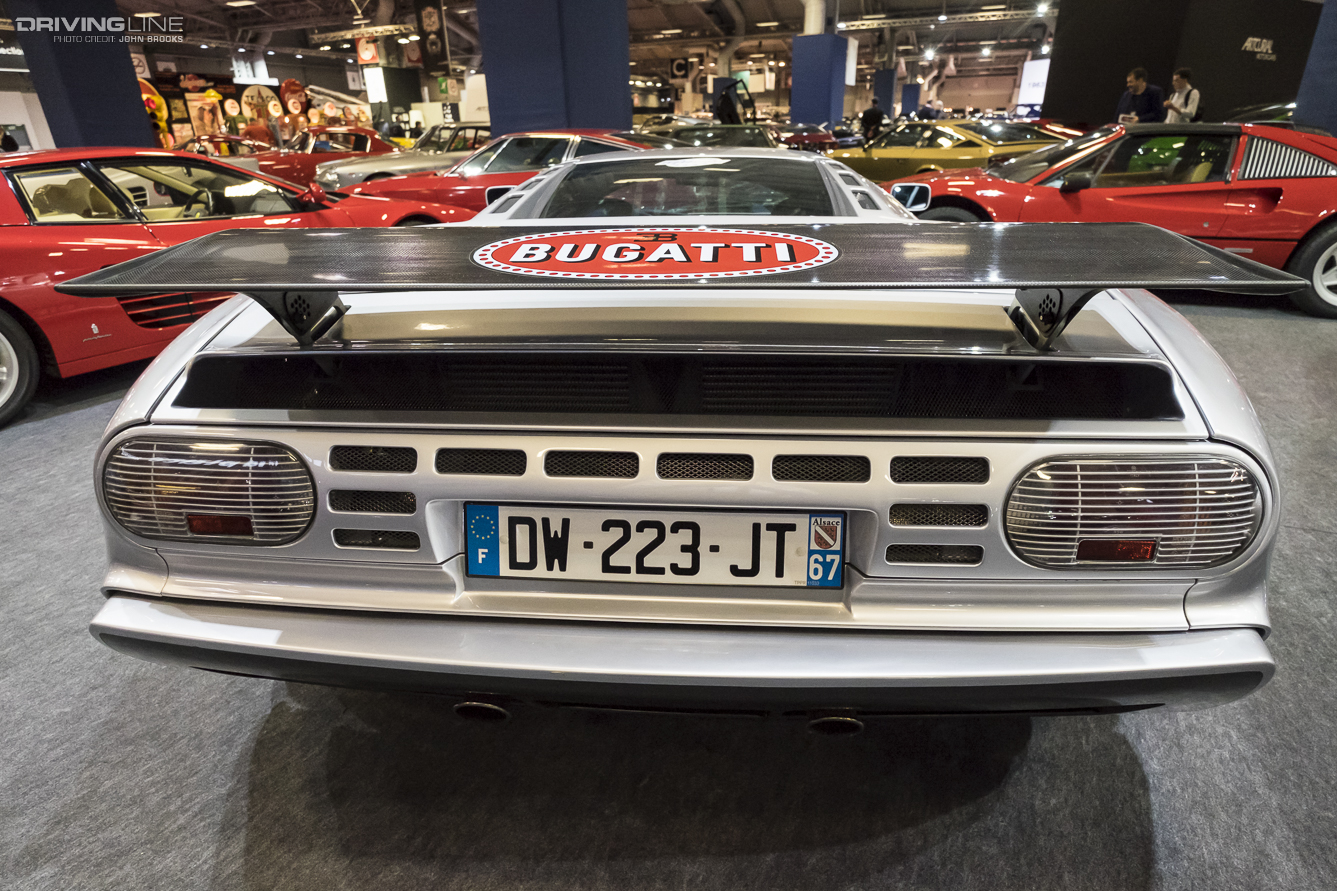 The trio had been owned by Monegasque businessman, Gildo Pallanca Pastor, and closer inspection showed the cars to be even more important that I had first believed. The two Supersports appeared to have competition history, that much I figured from the sponsors’ logos, one turned out to be a world record holder. On 2nd March 1995 Pastor set a new record for a car on ice of 296.34 km/h (184 mph) at Oulu Finland, the record being set on winter tyres without spikes. 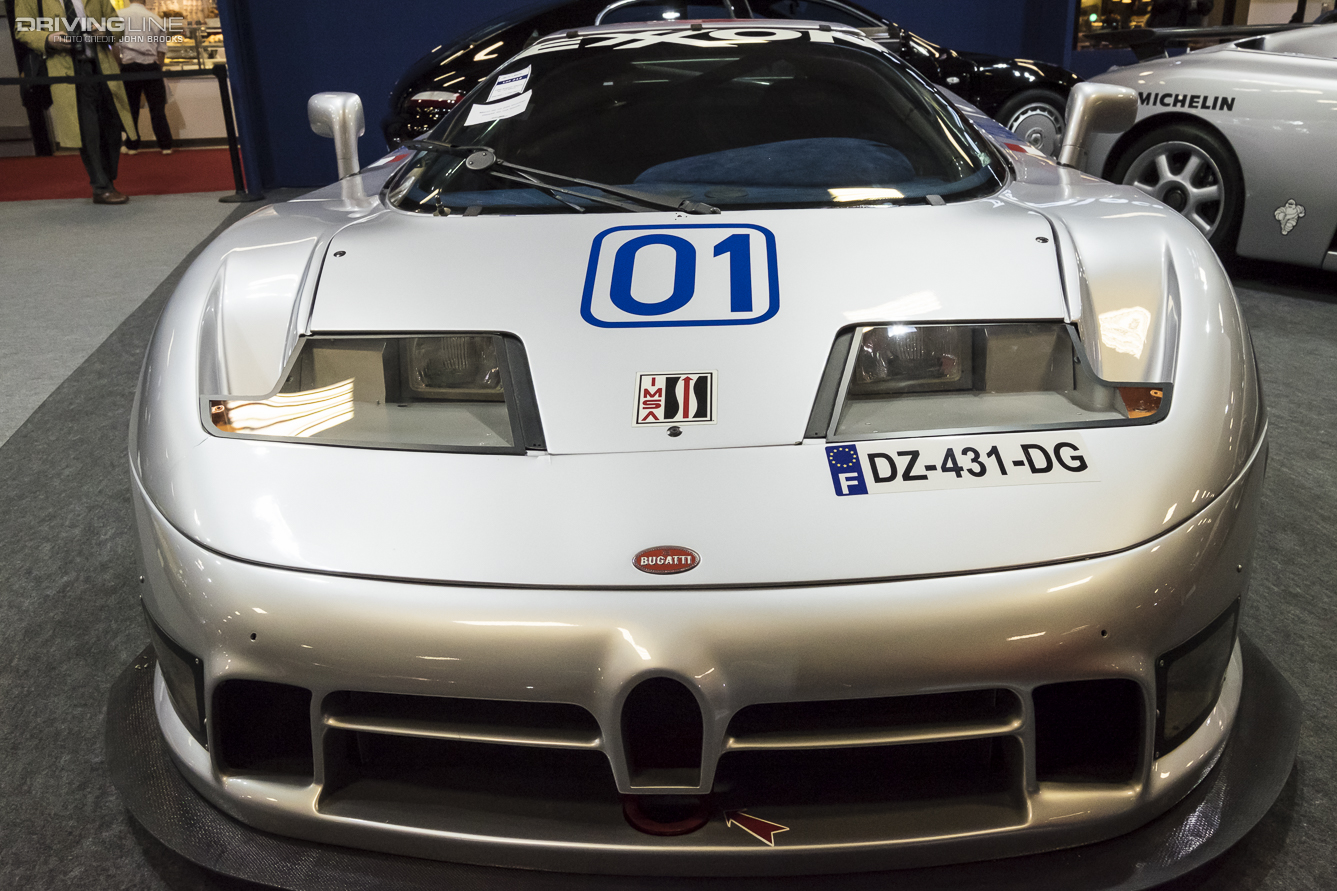 Pastor was not finished with returning Bugatti back to the race-tracks, following the lead of Michel Hommel who entered an EB110SS in the 1994 Le Mans 24 Hours. The car ran competitively till an accident near the end of the race forced it into retirement. Pastor took his other SS to the USA and ran in two races with two finishes in 1995 before heading to Japan for the Suzuka 1000kms, a round of the BPR Global Endurance Series. He was partnered with 1993-Le Mans winner Eric Hélary but transmission problems caused the Bugatti to retire. Pastor entered the 1996 Rolex 24 at Daytona International Speedway. Joining him at the wheel was Derek Hill, son of 1961 F1 World Champion Phil Hill, and Olivier Grouillard but they went out after 154 laps with gearbox failure. 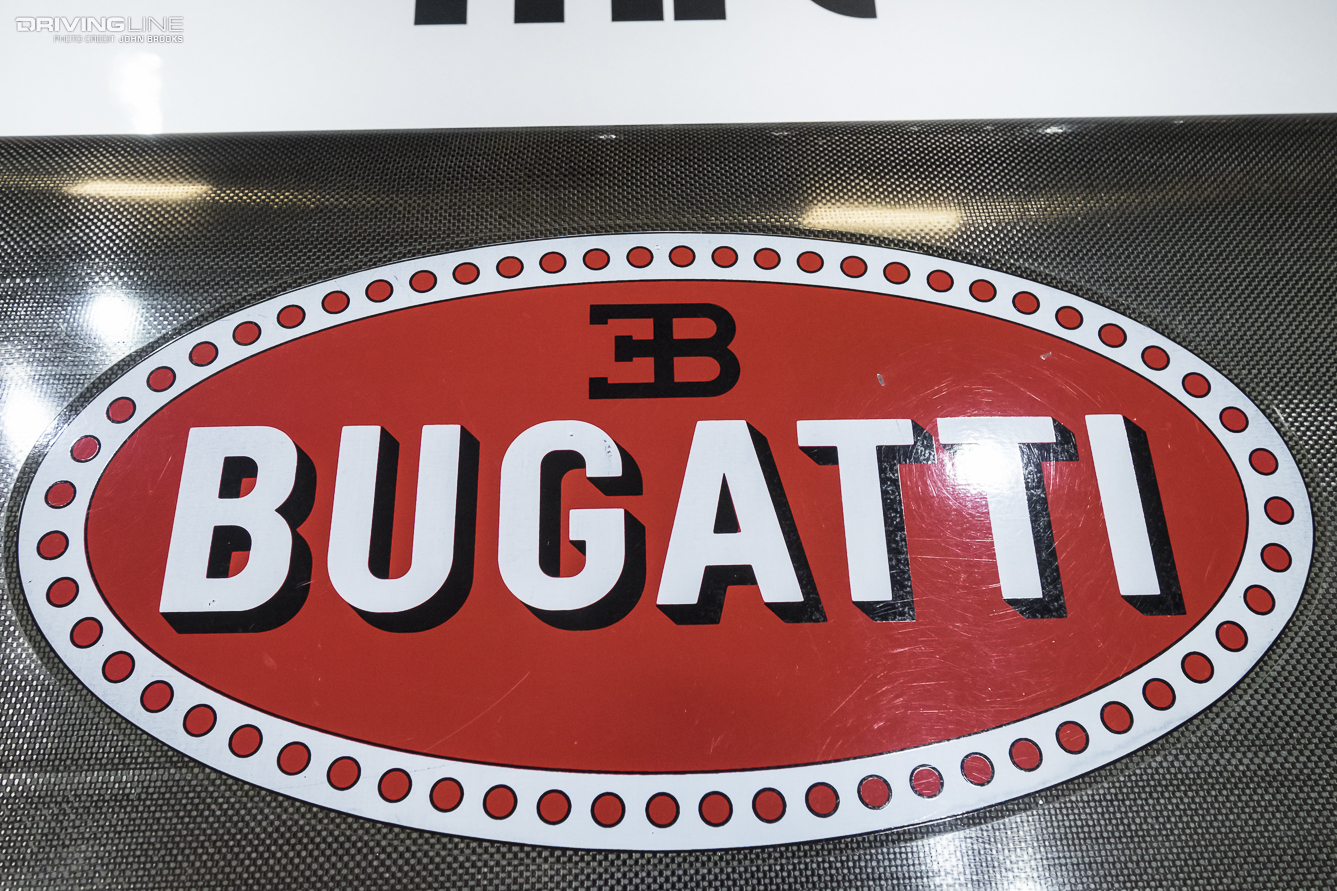 This inspired Pastor to enter Le Mans but that initiative sank almost at the start of Pre-Qualifying when ex-Ferrari F1 star, Patrick Tambay, crashed the Bugatti beyond immediate repair and, aside from a club race at Dijon a few months later, that was the end of the competitions career of Bugatti, which is unlikely to be revived under the current ownership. 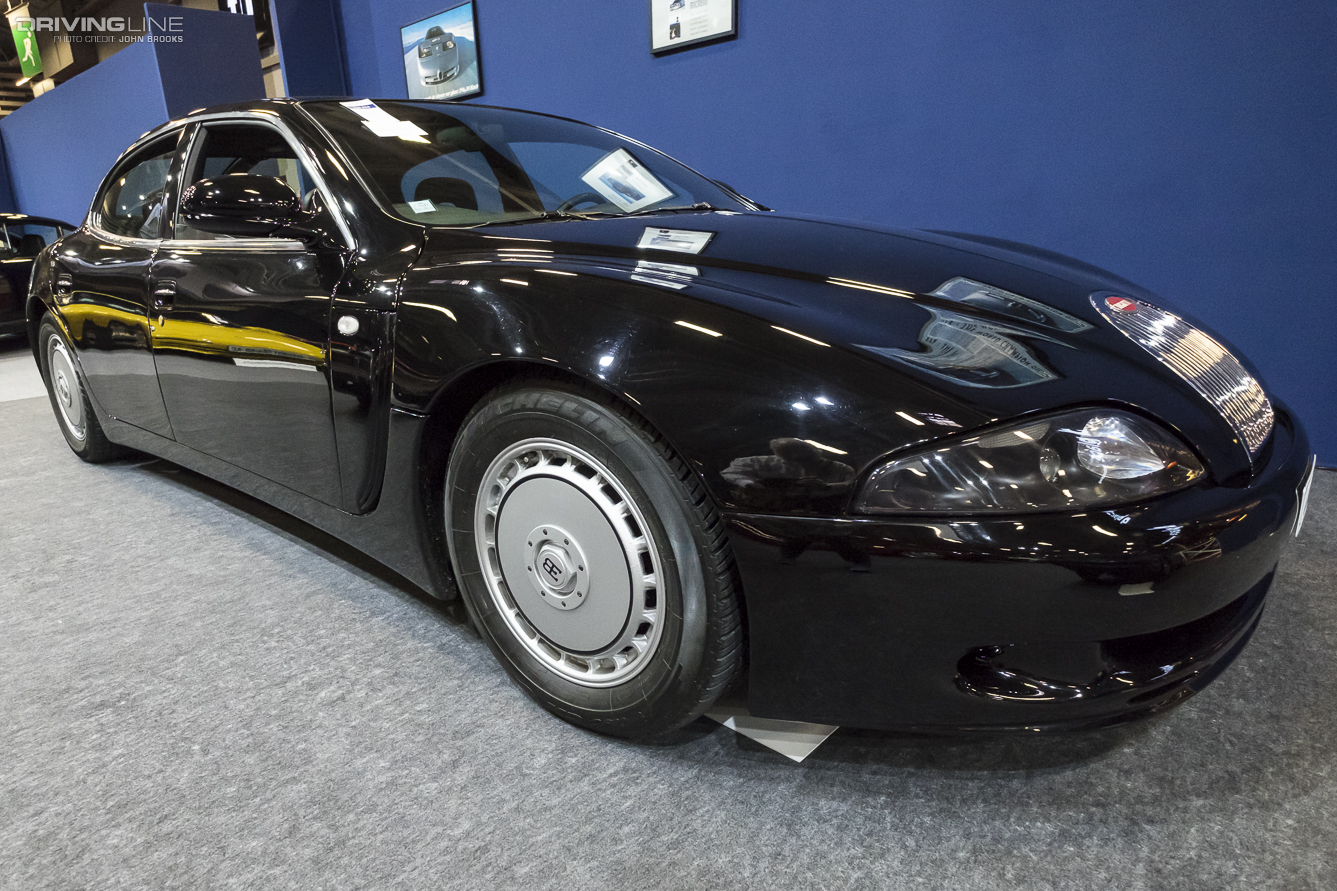 The EB112 also warrants more attention, something it attracted in spades at the 1993 Geneva Salon when it was shown to the world for the first time. Powered by a 6 litre V12, the elegant saloon design was the work Giorgetto Giugiaro at ItalDesign. The engineering team was under the guidance of the great Mauro Forghieri, whose work for Ferrari in the ‘60s and ’70s is legendary, producing four drivers World Championships and eight Constructors titles. Two EB112 prototypes were built and the project was set to go into production in 1996 but the financial disaster that engulfed Bugatti ended that dream.

Under the new owners Bugatti returned to its spiritual home in Molsheim, the automotive Risorgimento was done.