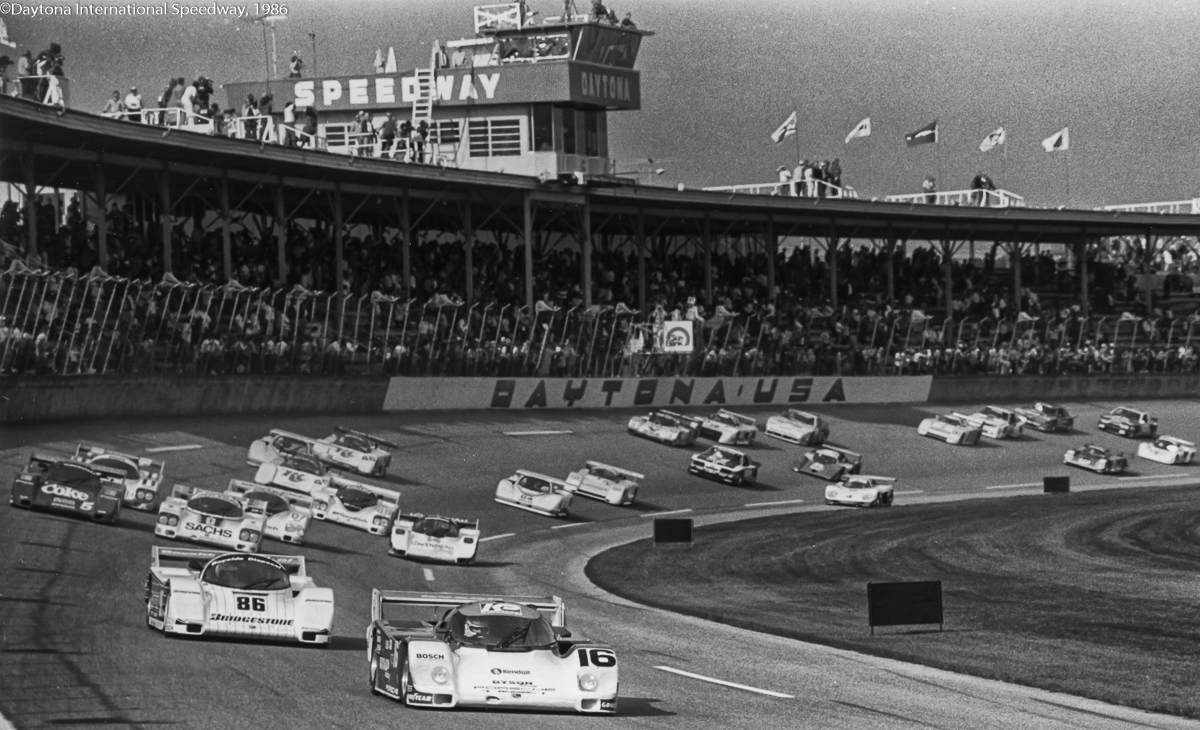 The 1986 SunBank 24 at Daytona was forecast to be the race where the old order in IMSA would be toppled. The old order was in the form of Porsche who had won eight out of the previous nine editions of the Floridian endurance classic. Even the March chassis that took honours in 1984 was Porsche-powered, quite a record. 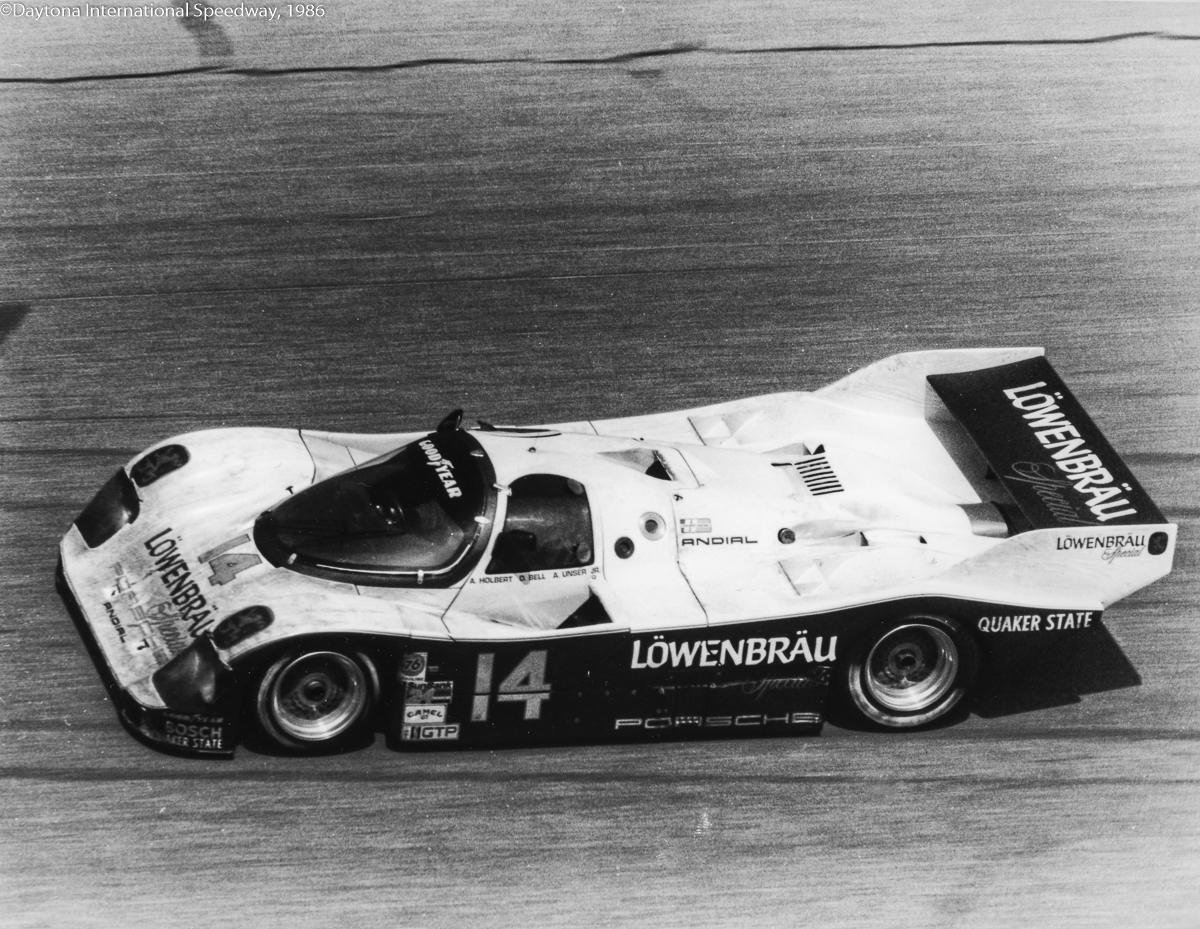 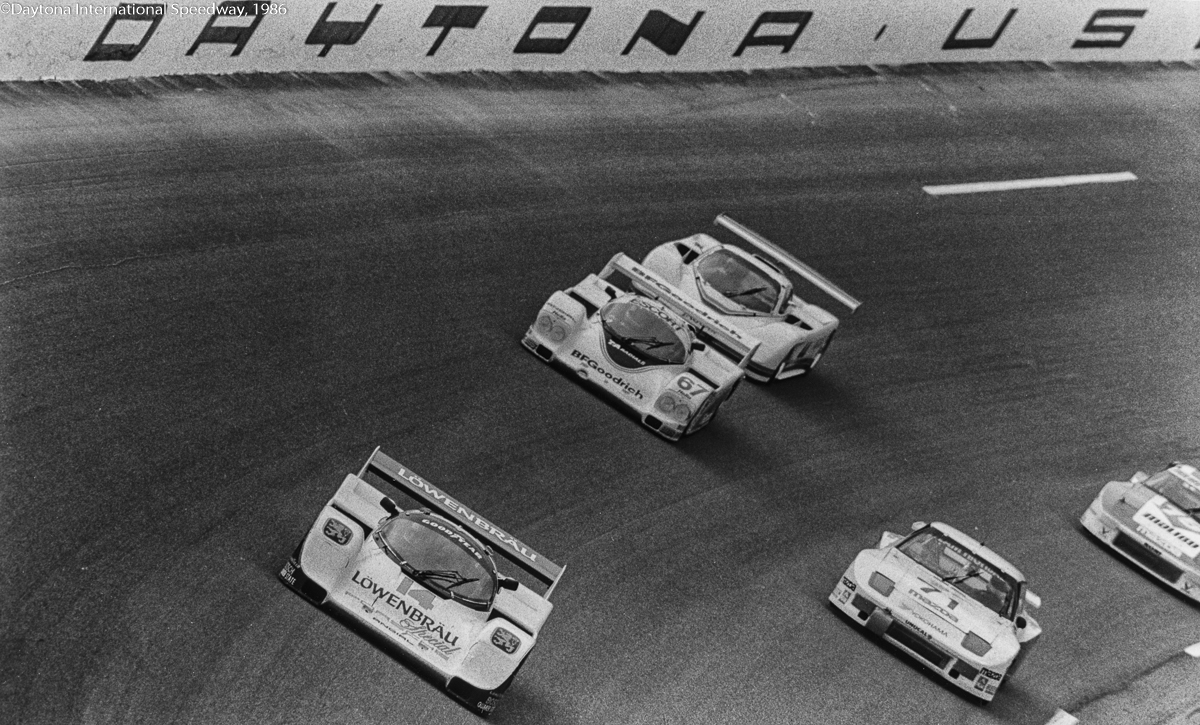 The pretenders to the endurance crown were factory-backed efforts from BMW and Chevrolet, with the Group 44 Jaguars also in contention, so a serious bunch to combat Stuttgart.  However the threat to Porsche’s hegemony had melted away even before the cars lined up on their way to the Green Flag and the start of the race.

BMW tested at Road Atlanta the week before the race and one of their GTP prototypes was consumed by fire while on track and, as the cause was not clear, it was considered prudent to withdraw the second car. One down. 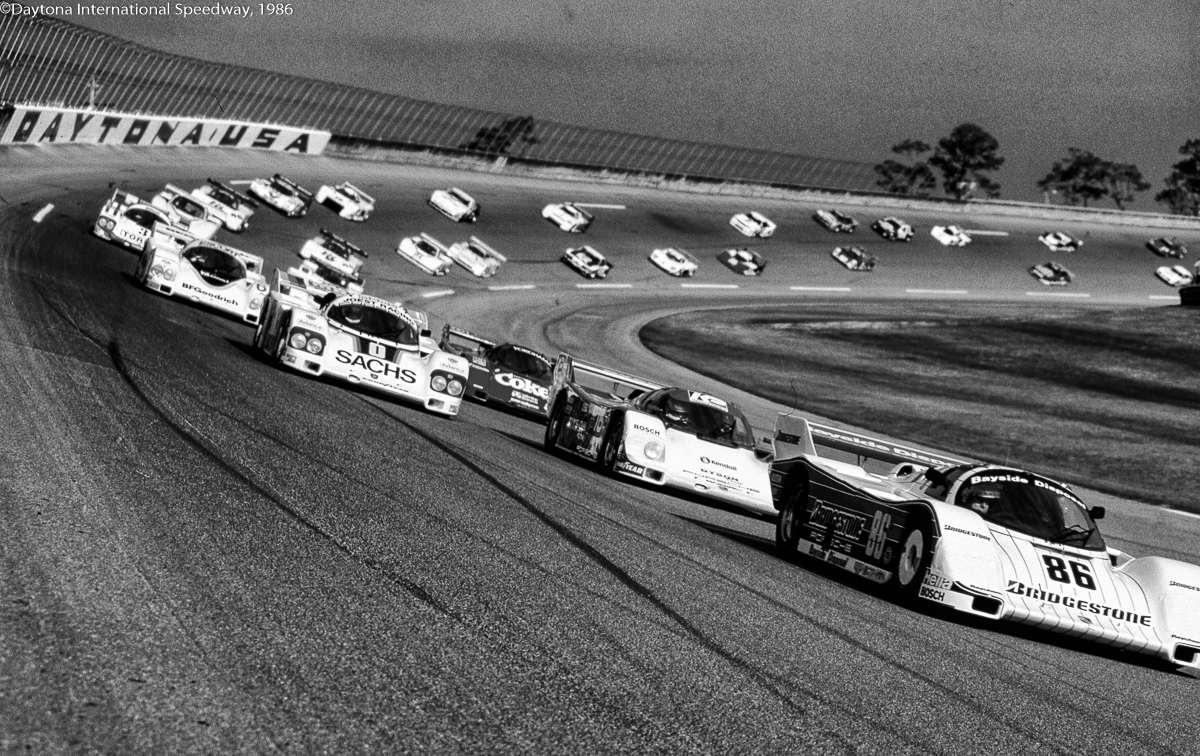 The other significant threat to Porsche’s supremacy was in the shape of the Corvette GTP of NASCAR team owner Rick Hendrick. The potential of the turbocharged V-6 powered car was evident as Sarel van der Merwe stuck it on pole position. However after an engine change a vibration was noticed in the morning warm-up. When this was investigated the cause was found to be a cracked engine block and there was insufficient time to change the unit. Scratch two!

So it was Bob Wollek who led the pack on the formation lap in Bruce Leven’s Bayside Disposal Racing 962 with Price Cobb and Paolo Barilla itching to pass the veteran French racer. 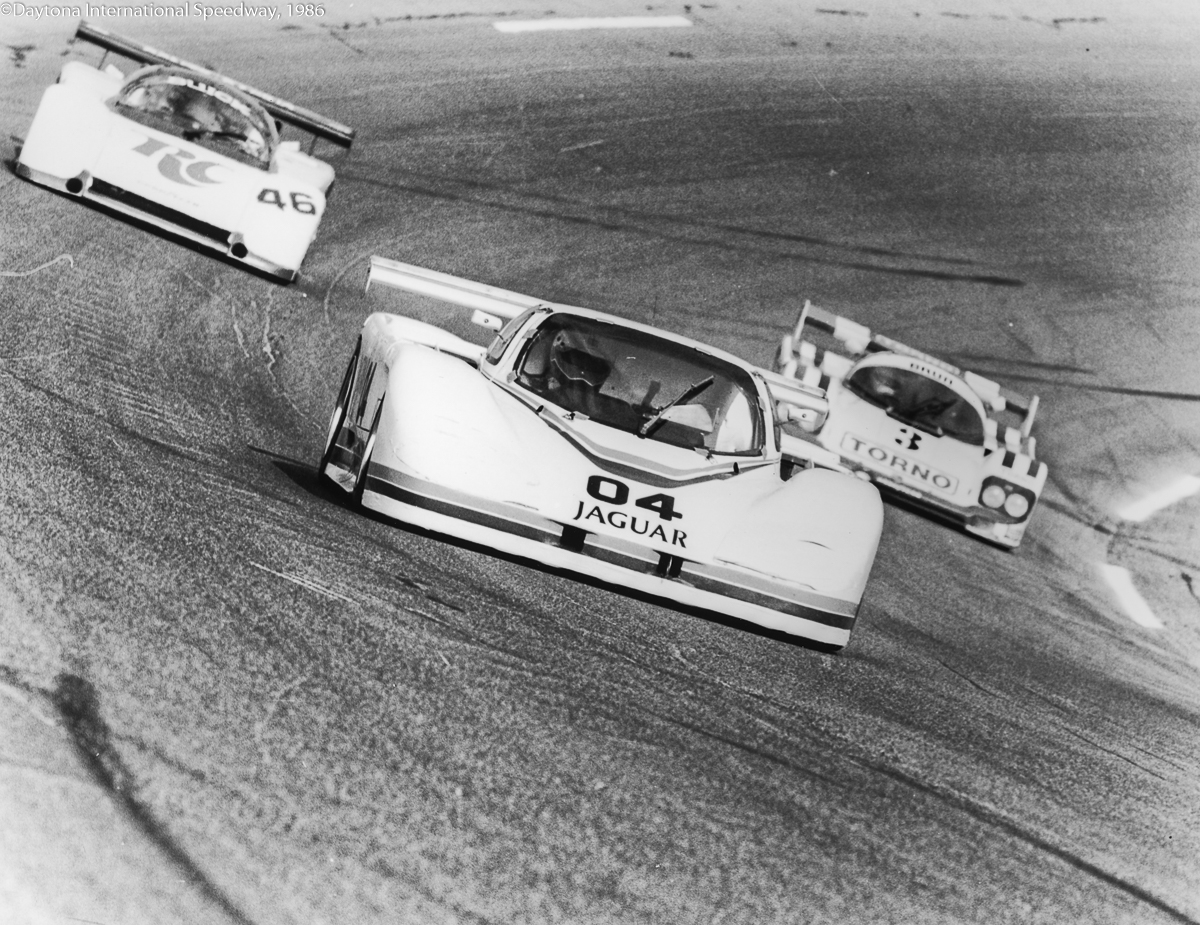 The Group 44 Jaguars were the new XJR-7 cars, a complete update of the XJR-5 and probably lacking sufficient mileage to seriously threaten the 962 gang for the top step of the podium. Team owner Bob Tullius would be partnered by Chip Robinson and Claude Ballot-Léna in #44, while in #04 there was an all-star line up of Brian Redman, Vern Schuppan and Hurley Haywood. 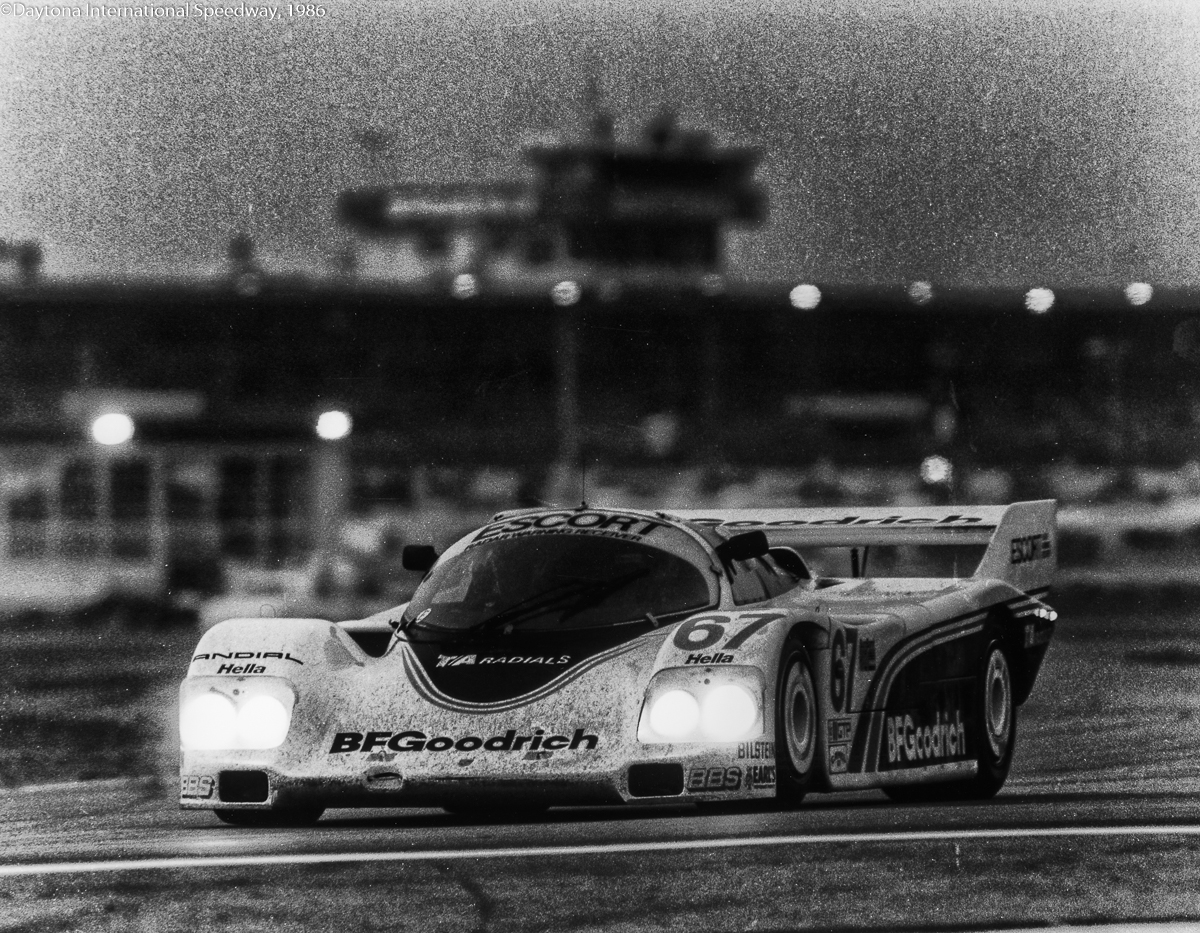 New rules for 1986 also impacted the Porsches and would play a significant part in the race itself. The biggest change was the addition of 160lb of ballast, this would tax the already stretched components. The Daytona 24 Hours has a reputation as a car-killer and even the 962s would suffer. 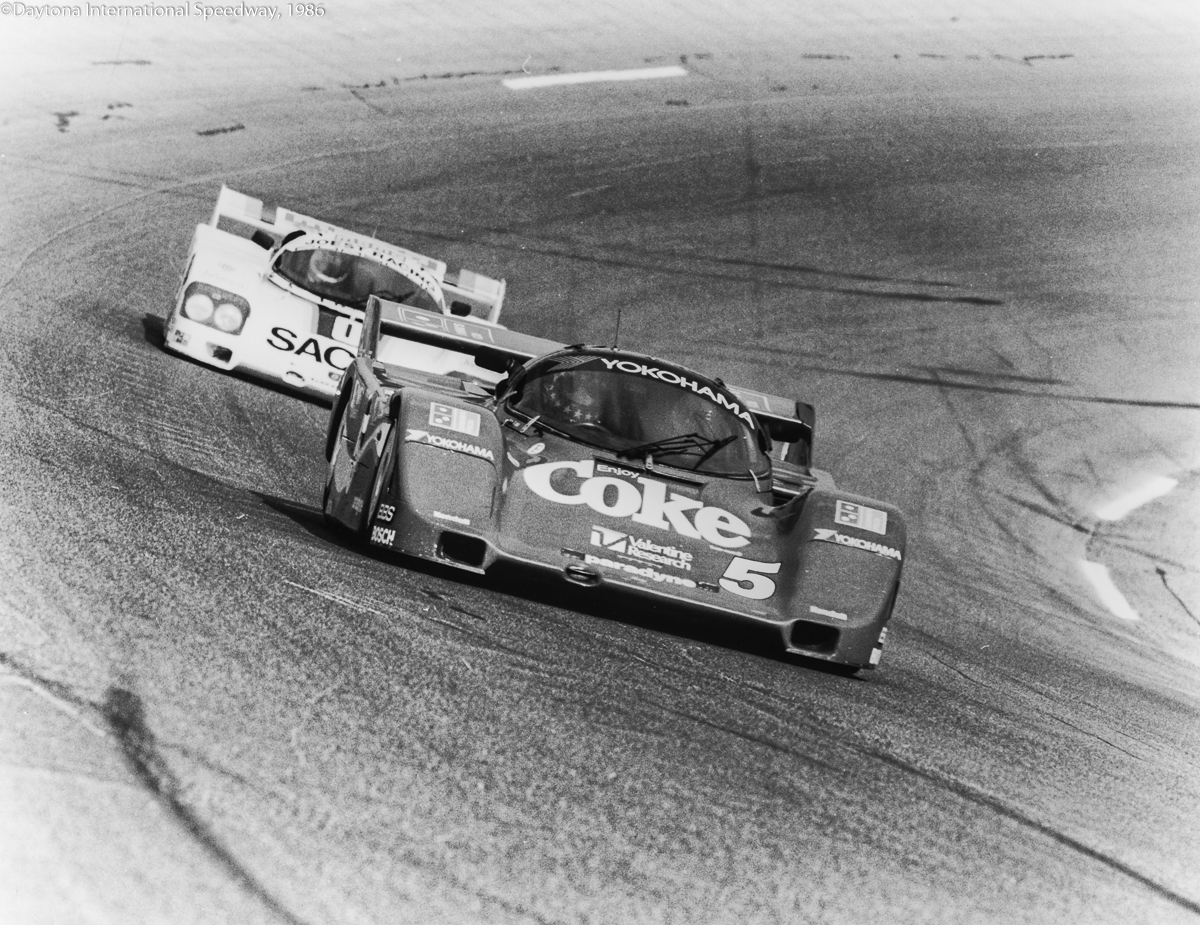 First of the leading contenders to exit the race, after only 6 laps, was the Joest car suffering a broken distributor rotor. A few laps later Hans Stuck hit the wall in the Coke-sponsored 962, the drink that is, this was after all IMSA. Then Bob Wollek collided with a suddenly slowing car on the banking and that was the end of his race and that of the Leven 962. Also out before sunset was the Brun 962 with some form of electrical malady. 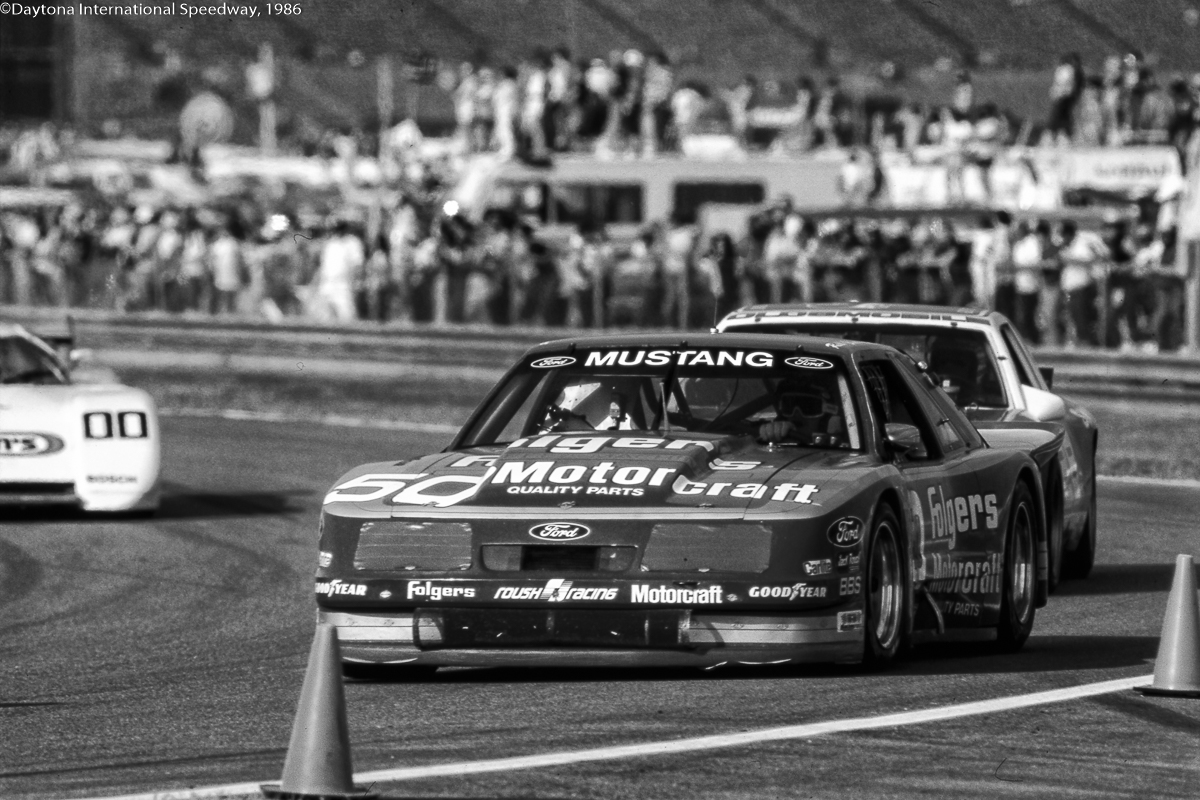 Down in the GTO class NASCAR fans had something to cheer with the #50 Jack Roush Ford Mustang having a crew comprising Bill Elliott, Ken Schrader, Kyle Petty and Ricky Rudd, all Winston Cup regulars. This car ran in the leading group of their class in this Ford-supported effort till Rudd hit the barriers coming out of the back stretch chicane sometime during the night. 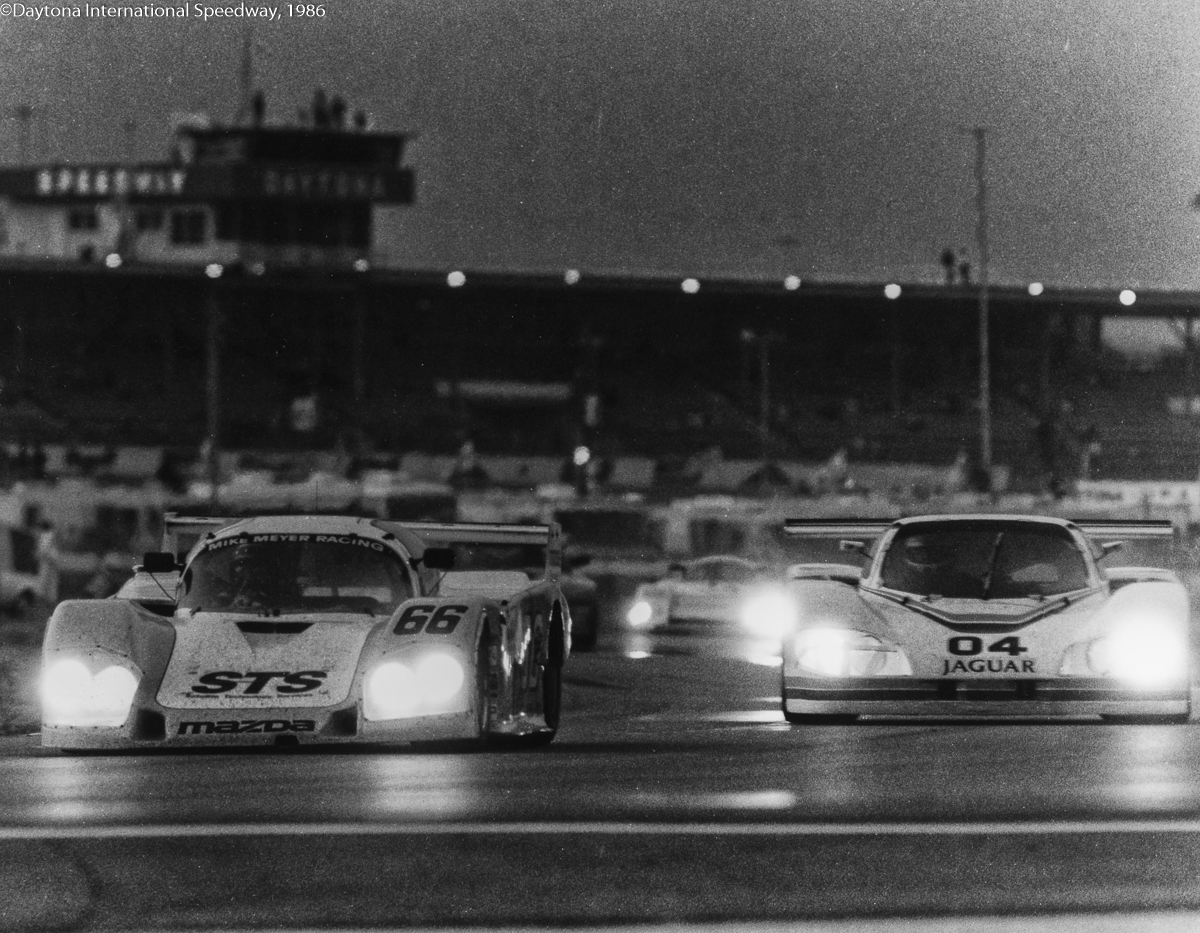 As forecast before the race the Group 44 Jaguars struggled on track with various suspension and transmission issues, then the engine failed in the #04 car. There was some measure of satisfaction for the team as the #44 Jag cruised home to sixth and fourth in class despite spending over an hour behind the wall during the race. 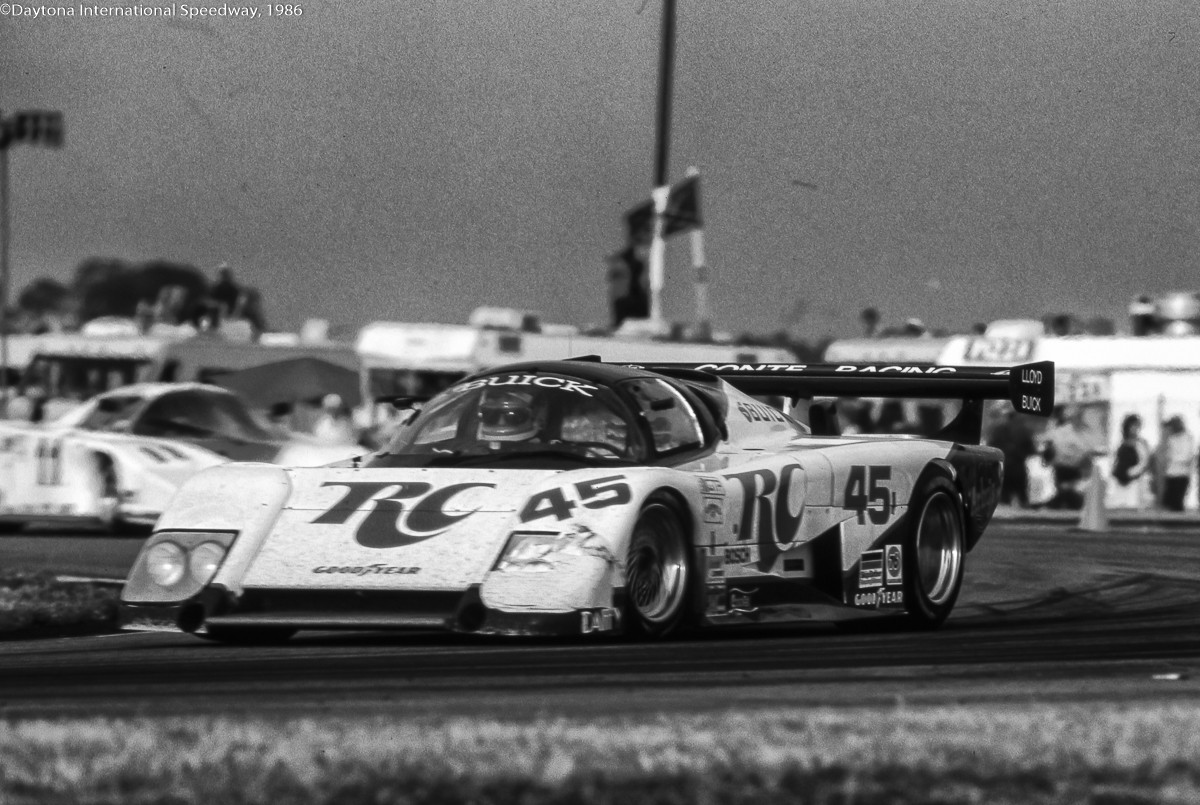 The only real challenge to the 962 armada, aside from self inflicted injuries, came from the March 85G Buick driven by John Paul Jr., Chip Ganassi, Whitney Ganz and ex-Ferrari Grand Prix star, Ivan Capelli. JP posted the fastest lap of the race and the car ran in the top three till the engine cried enough, just past the halfway point. 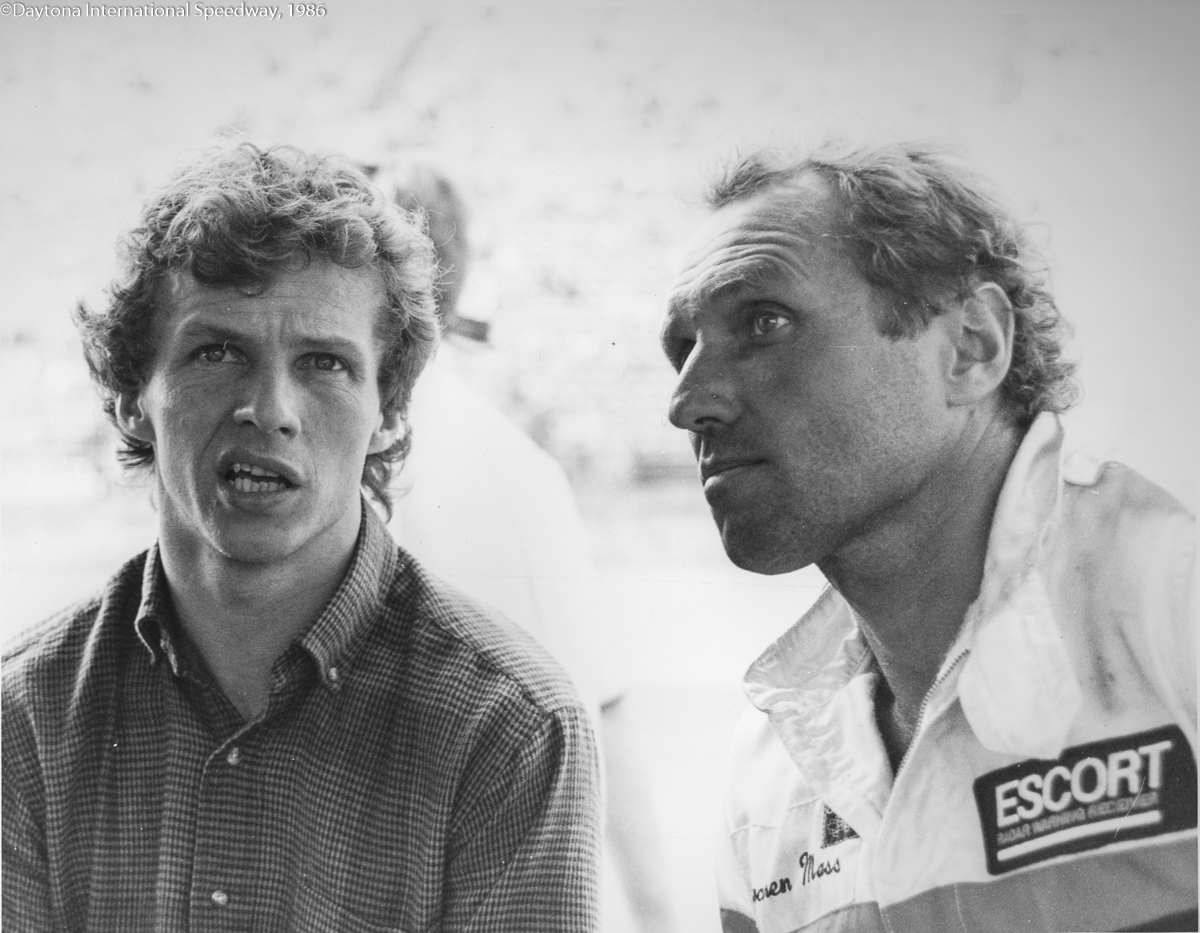 Further carnage in the 962 field saw the Dyson car go out with engine failure. Jan Lammers had one of the biggest crashes of his career when the brakes failed on the second BF Goodrich 962, he had to be extracted through the windscreen as the car had folded up around him. By some miracle he survived without a scratch, only a few minor sprains. 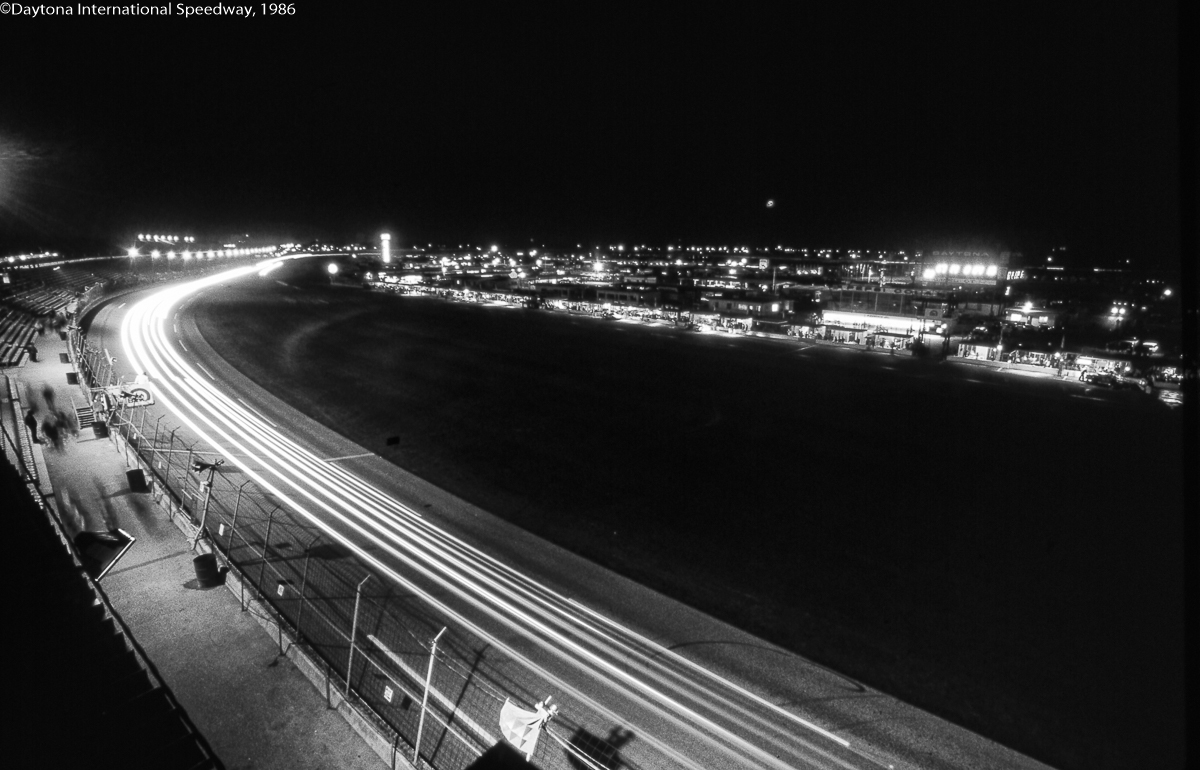 Delays to the Holbert Porsche for brake line failure and broken throttle cable meant that the lead during the darkness was disputed by the Swap Shop 962 of the owner, Preston Henn, and his trio of Indianapolis 500 winners, A.J. Foyt, Arie Luyendyk and Danny Sullivan. Opposition came from the surviving BF Goodrich Porsche of Derek Warwick, Jochen Mass, Darin Brassfield and Jim Busby, these two cars swapped the lead during the night, apparently in a race of their own. In common with the Holbert car, some distance back, these Porsches were being wrung by the neck, each lap treated like a qualifying effort. 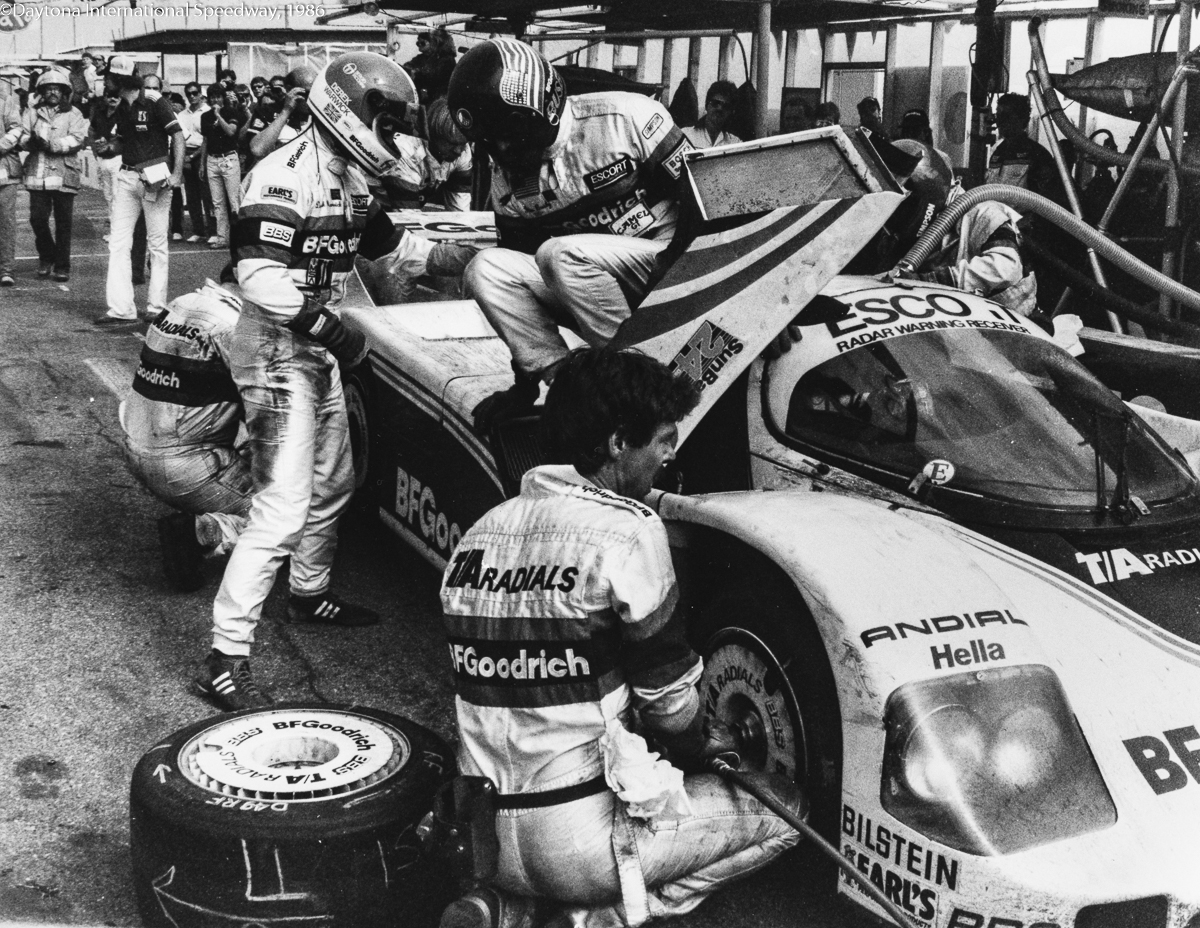 Then, as the sun appeared from the East, things started to go wrong for the leading pair. #67 suffered a broken CV joint and then a driveshaft failure, time was being lost in the pits, any chance of victory also seemed to have evaporated. 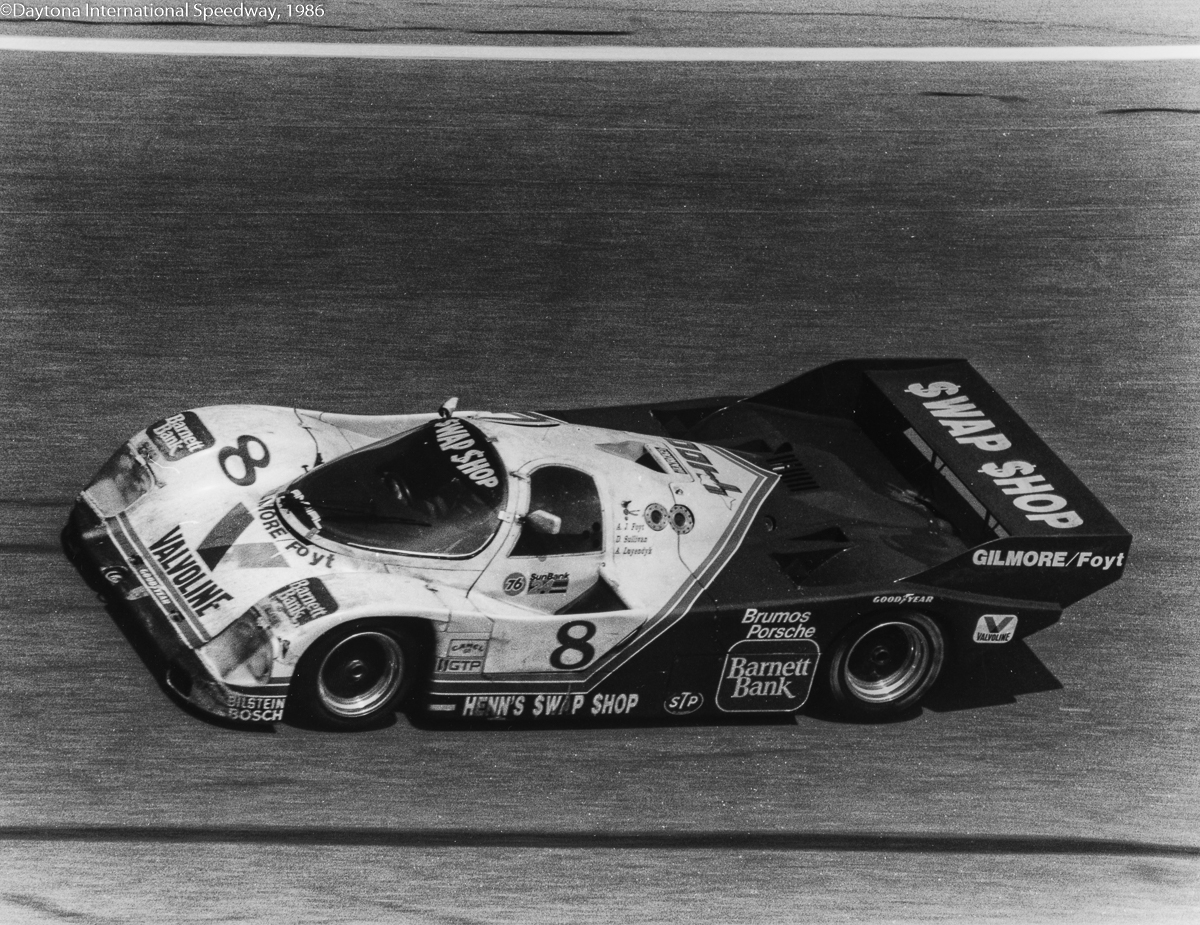 #8 was also in the wars, an oil line had to be replaced as did a turbo wastegate. The biggest issue was a sticking throttle and the team elected to fix it costing some eight laps, however the problem persisted and their once substantial lead was disappearing fast. 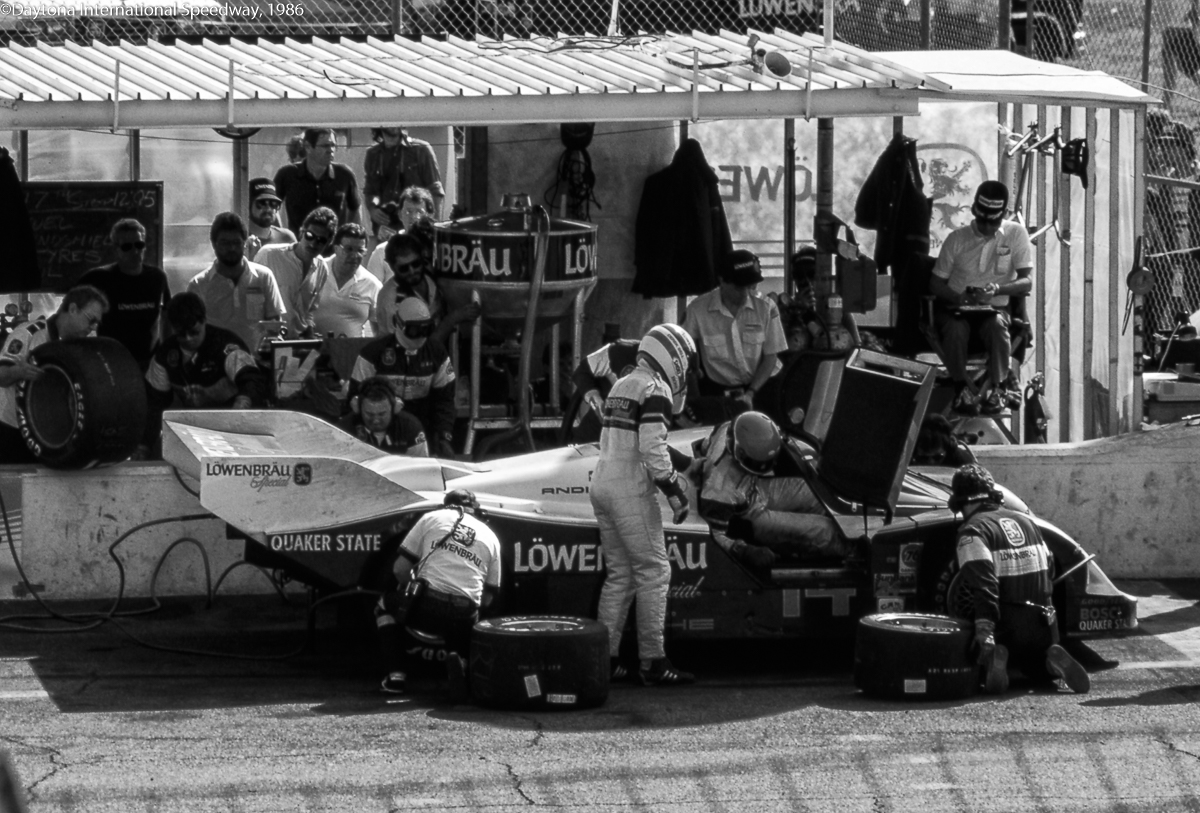 At one point the Holbert 962 had been 22 laps off first place but as their rivals struck misfortune they closed in on the top spot. Holbert, Bell and Unser Jr. knew all about the cruelty that the Daytona 24 Hours could inflict on those seemingly destined for glory. A year previously they had seen a 13 lap advantage while leading on Sunday morning turn into a 17 lap deficit that would result in second place. 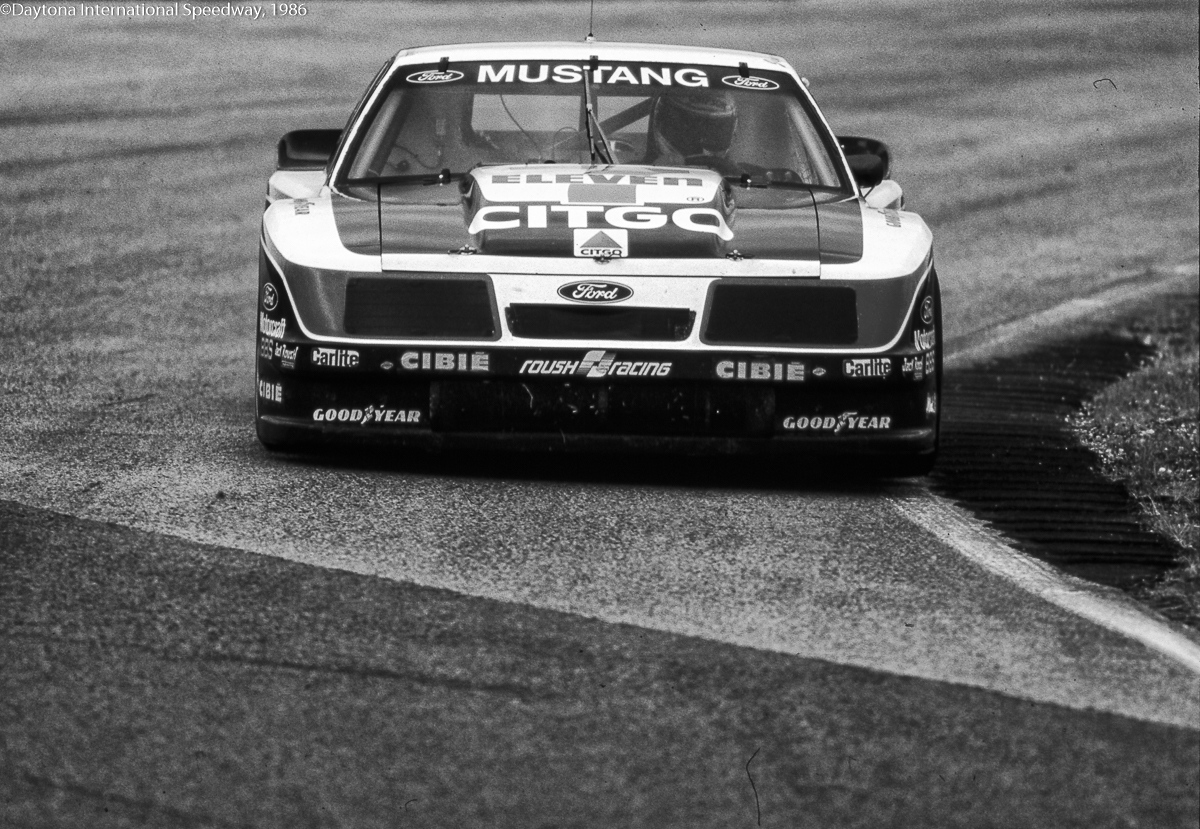 If further proof were necessary about the capricious nature of racing round the clock at Daytona Beach consider the fate of the #07 Ford Mustang. The driver trio of Klaus Ludwig, Scott Pruett and Bruce Jenner (Yes, THAT Bruce Jenner) built up a lead of 90 laps over their nearest class rivals. Late on Sunday morning they had to witness this apparently impregnable advantage unravel as they were stuck in the pits trying to repair an oil leak, they still managed a second in class and fifth overall, a good indication of the attrition suffered by the whole field. 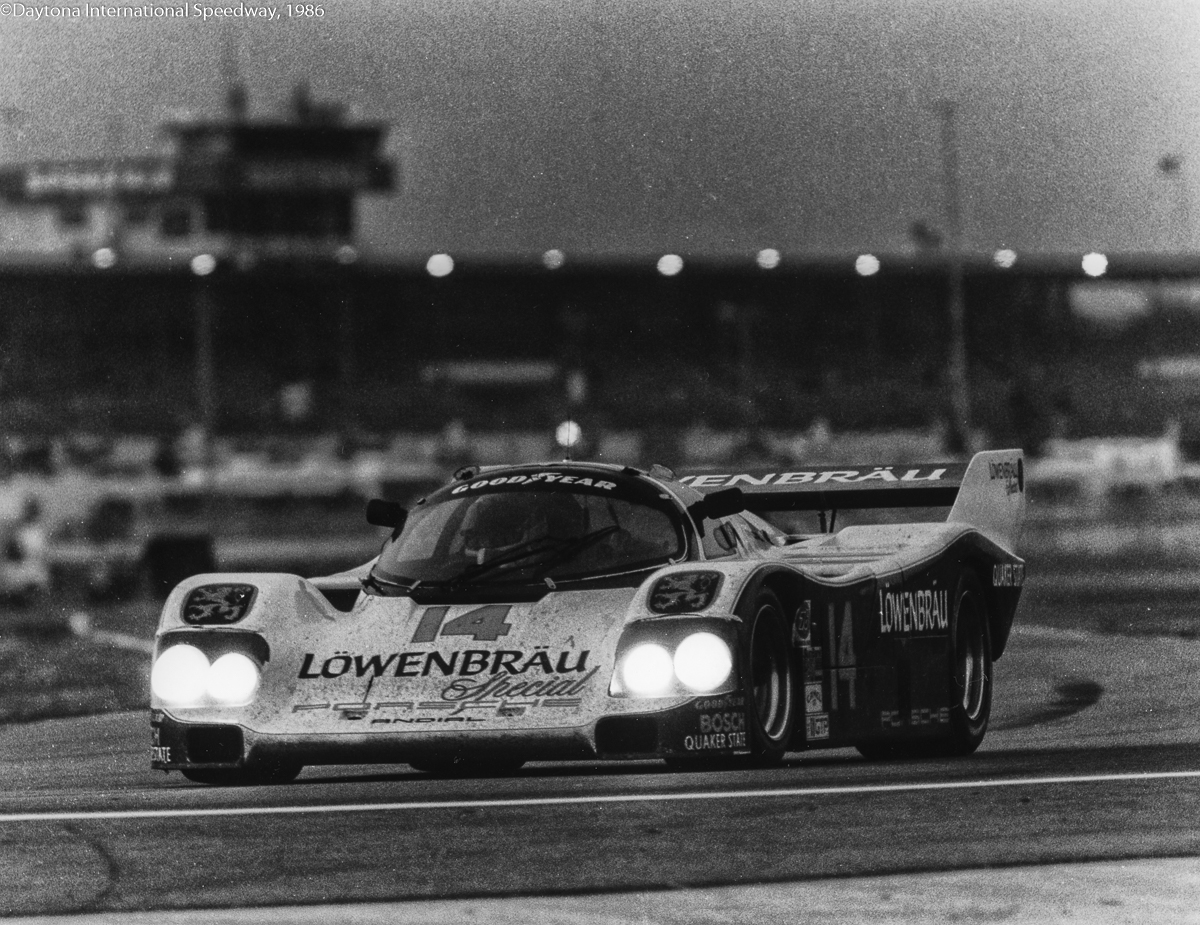 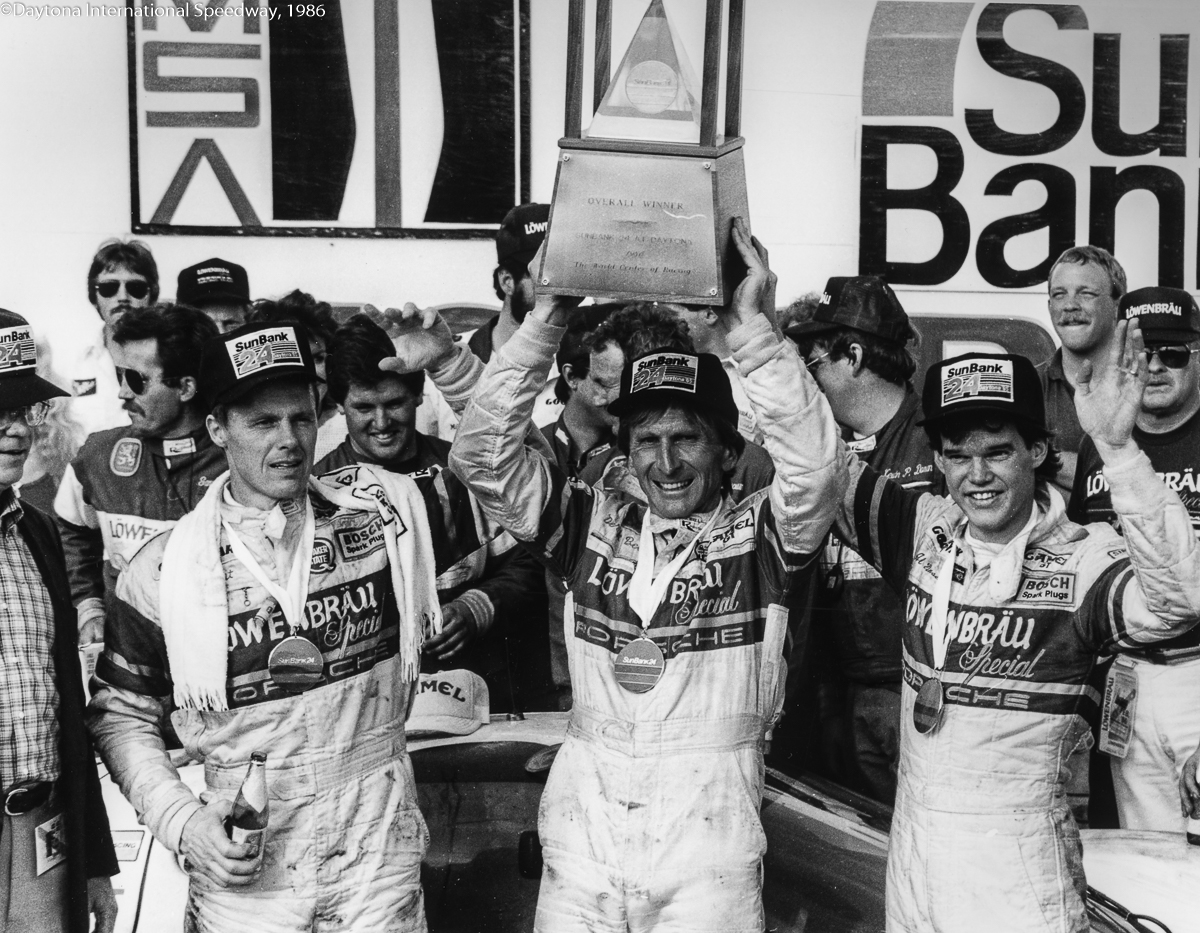 There would be no repeat of the crushing disappointment of 1985, Holbert, Bell and Unser Jr. would get to spray the Champagne and hoist the trophies. They would repeat this triumph a year later but Holbert’s time was running out, he was killed in a plane crash in September 1988, an endurance champion was lost.