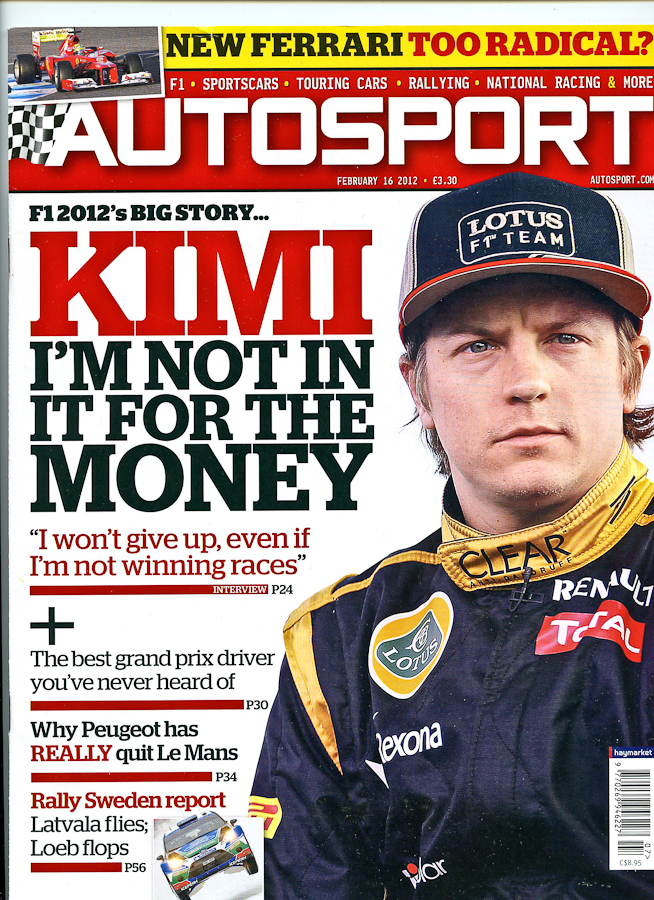 Friday morning’s mail for once includes the latest issue of Autosport, arriving a day earlier than of late. The cover features a snap of the Kimster looking “slightly foxed” as Private Eye would say. The accompanying headline screams “Kimi – I’m not in it for the money. I won’t give up, even if I’m not winning races”. Yeah, whatever.

Further down the page another headline really caught my eye, “Why Peugeot has REALLY quit Le Mans”, a non F1 feature making the cover, now that is special. Then the story of a major manufacturer quitting a new World Championship and the World’s greatest race without notice really is news.

Turning through the acres of pre-season F1 stories I reached page 34 and settled in to read the feature penned by Gary Watkins. As one might expect of such an experienced and skilled journalist, the piece was well written, stacked with quotes and facts that were relevant, a succinct summary of “five years of the 908”. Unfortunately that was not what had been promised.

Nowhere in the article was vulgar subject of money mentioned, no attempt to answer the question as to why the total cancellation of this high profile project without notice was considered necessary by the Supervisory Board of PSA Peugeot Citroën. As one of my highly respected colleagues put it, the piece read like a retrospective that might run in Motor Sport in a few years time. Certainly there was no commentary to support the promise of the headline on the front cover.

So what really happened at Peugeot to force such a draconian measure? About ten minutes on the Internet gives all the answers. Peugeot cars made an operating profit in 2010 of €621 million. In the first six months of 2011 a further profit of €405 million was accrued but when the year end was reached this had fallen to an overall loss of €92 million, a six month loss of €497 million, that is not sustainable for any enterprise in the long run.

It would appear that the company has still been turning out cars as normal but selling them in the tough market conditions at a loss. Chief Financial Officer Jean-Baptiste de Chatillon admitted inventory levels of assembled vehicles at the end of 2011 were “unsatisfactory”. That is a way of saying that potentially, further financial pain is on the way. Back in the last century when I had a real job, the accounting convention was to value Stock and Work in Progress at the lower of cost or net realisable value. It was a fantastic accountants’ equivalent of advertising industry’s weasel word, as an element of subjectivity is introduced under the cover of  objectivity. Valuation of stock has a direct affect on the profitability or not of a company’s accounts. A perfectly reasonable judgement, made with all due diligence, can, with the passage of time, turn out to be erroneous. To be fair predicting the future is an inexact science and you have to do the best you can with the information available.  I am not in a position to judge whether the value of Peugeot inventory held at the year end remains valid today. All that can be said is that car sales throughout Europe have plummeted in January 2012 and the expectations for the next few months are no more optimistic.

Figures from the European Automobile Manufacturers’ Association (ACEA) show sales of passenger cars fell 7.1% to 968,769 in January compared to the previous year. Sales in Portugal collapsed, falling 47.4%, while France saw sales drop 20.7%, Italy was down by 16.9%. This makes it even more unlikely that Peugeot, already suffering, will be able to trade its way out the hole that it finds itself in. Will the inventory even make the written down position as at the end of December 2011 and what will be the likely effect on margins?

Desperate times call for desperate measures. In last October PSA planned a reduction of annual overheads amounting to €800 million, coming at a cost of 6,000 jobs. Subsequently further cost cutting of around €200 million from annual overheads has been considered necessary. A race programme consuming a rumoured €50-60 million per annum would be an obvious target for both management and unions, given that any easy options had already been exhausted.

The losses will have also drained the cash reserves of PSA, so assets are being disposed of. The company raised €440 million from the sale of car rental company CITER and there is plan to dispose of real estate which is anticipated to raise a further €500 million. Perhaps the most significant sale is that of an undisclosed shareholding in wholly owned transport company GEFCO. Even in the difficult market conditions of 2011 GEFCO accounted for 16% of the PSA Group’s profits. Furthermore, disposing of these assets in the prevailing economic climate and in the circumstances of a fire sale is hardly likely to maximise potential returns. The PSA Group is hoping raise €1.5 billion from these transactions, a tall order.

As has been proved time after time, manufacturers only go racing when it suits them, it is not part of their core activity and while bragging rights are great for the marketing department, they mean little to the employee on the shop floor whose livelihood is under threat. I have been told, but cannot possibly confirm, that the competitions department was shut as part of the horse trading that went on between the PSA management and the very powerful French trade unions. Suggestions that the programme might reappear in a year or two are wide of the mark. The factory and equipment are being liquidated as part of the asset disposal plan, I know of teams that been given the opportunity to purchase the inventory. The personnel are being redeployed within the PSA group, or so we are told. While the high profile drivers and team bosses scramble to find another role, the real tragedy lies in the fate of the foot soldiers. For over 30 years Peugeot have been a major force in motorsport, successful in pretty much everything they have attempted. The wins have been founded on the efforts of the Jean-Michels and Jean-Philippes of the factory floor, for the most part anonymous but vital to the result. In recent years they have taken on the might of Audi and for the most part beat them comprehensively, two high profile defeats at Le Mans in 2010 and 2011 being the only black marks. Those who toiled at Peugeot Sport can look back on their achievements with pride, it is not their fault that the department has been closed.

Which brings us full circle to the Autosport feature, which has a very good explanation of the recent racing history of Peugeot, without any mention of the financial issues that killed off that activity. I would have expected both inter-related areas to have been covered, especially from the headline on the cover or indeed the banner above the piece. Insight – Peugeot’s Pull-Out. Anyone might surmise that the sub editor writing the headlines had not read the piece.

But what do I know?