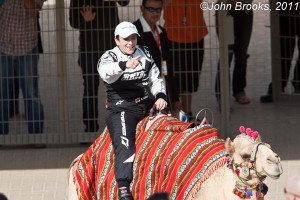 For the past five years the Motosports’ world has been kick-started into life each January by the Dubai 24 Hours. The event has grown in scale and stature with the organisers taking good care of their customers, that is evident by the 84 cars that took the flag this year to commence the long pound round in the sand.

For those of us from the UK, we must be doubly thankful that attendance of the race in the United Arab Emirates gives us the perfect excuse to miss the Autosport Show held at the ghastly NEC. That alone is worth the price of the flight. 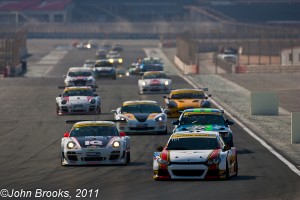 All the Sizes, All the Colours

The Dutch organisers, Creventic, have taken full advantage of the popularity and accessability of the GT3 and GT4 classes. They have also learned from the VLN and Nurburgring 24 Hours to try and accommodate a mix of GT and Touring cars. Some are factory efforts in all but name while many are genuine privateer teams who show great resourcefulness in taking on that most challenging of motorsport tasks, racing non-stop  for 24 hours. 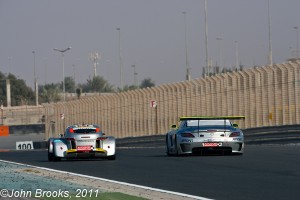 Creventic have also been assisted in their mission by Grand-Am taking the Daytona 24 Hours on a different route from the rest of the endurance world. Right now the GT2-3-4 cars do not comply with Grand-Am rules and therefore cannot race at the Rolex, though Grand-Am’s management are having a good look at that issue. They may be too late. The traditional trip to Florida in January from Europe has largely become a thing of the past for racers. The delights of travelling to and from the USA as a Non-Citizen are not to be discounted either. Customers will vote with their feet. 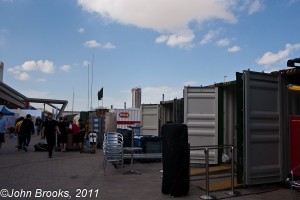 The containers were lined up behind the pits, disgorged of their contents. The mechanics twirled their spanners, the fitters from Dunlop inflated the tyres and we were all ready to go racing. 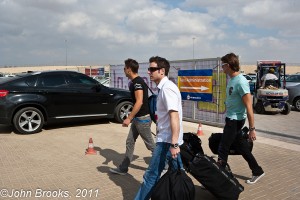 All, except one team. Lotus had been straining to finish their GT4 Evora, so planned to fly it out to the Middle East on the Monday night. They must have booked CrapAir as the precious cargo was unloaded from the aeroplane before take off, leaving the Anglo-Italian driver line up twiddling their thumbs. Here Johnny Mowlem and the Mansell brothers head back to Jumeira Beach. 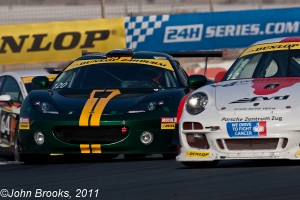 Then the news from DXB was better, the car was in the UAE and once the Customs formalities had been observed the car arrived at the track.  The bad news was that it was Thursday evening by this time, with the event starting on Friday afternoon. A few laps in the Warm Up for JM and Stefano D’Aste were the sum of the running for this new car. Now for a 24 Hour race. 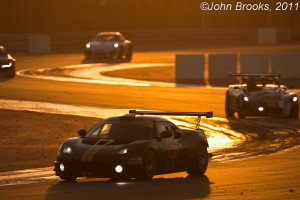 The view for Johnny at the start was some 83 other cars between him and the front. He described the scene in a piece on the authoritative sportscar and endurance racing website DailySportsCar

“So for the race itself I was right at the back of the grid – and it was a BIG grid.  The rules say that you can’t overtake before you pass the start line and I reckon I was at least 6 corners from there when I got the call that the race had started – The race leaders must have been at least two thirds of a lap ahead by the time I had actually gone over the start finish line!” 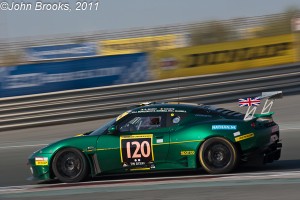 Rub of the Green

“That said, the car was excellent and I could make pretty good progress – the rules dictate that you have to pit for a driver change every 2 hours but by an hour and a half I’d managed to get by the Aston Martin of Hancock, Kane, Masaood and Kapadia to take the class lead. We then pitted 20 minutes later from 30th place –  so 55 cars passed in a stint – that’s probably a record for me, but to be honest the car was so good it made my job very easy!” 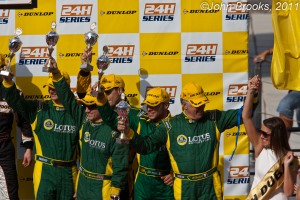 It was a mega-stint by any standards and set the tone for the whole race. Three driveshaft failures caused by an exhaust manifold overheating a CV joint delayed the Evora but getting a podium in the competitive SP3 class was a fantastic result and just reward for all the hard work. It was the best possible advert for the GT4 Lotus.