Our Special Correspondent trekked up to Northampton a while back for the Britcar 24…………….he shares some thoughts and a short history lesson…………. 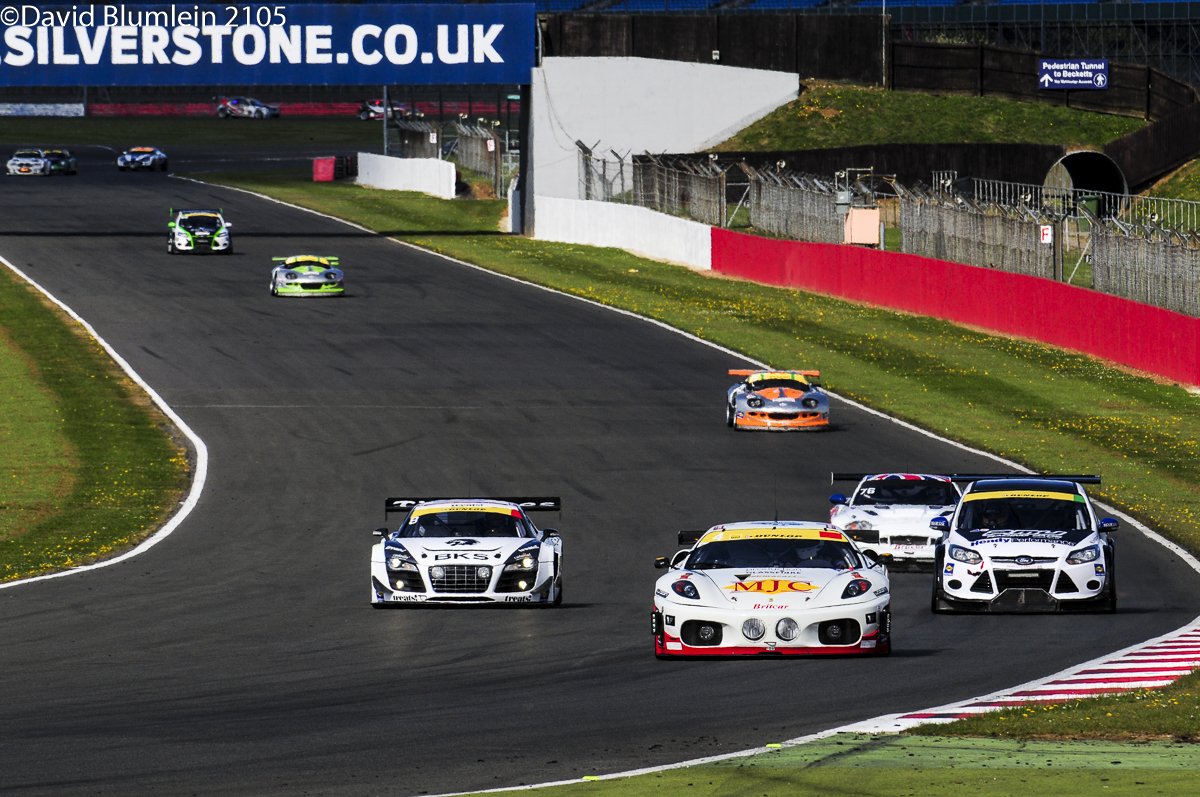 Revival of Silverstone 24
Although 24 hour races have been run since 1905, most of the established examples date from the 1920’s: the Bol d’Or in and around Paris was first run in 1922, Le Mans arrived on the calendar a year later, Spa copied this in 1924 and even Monza tried a race that year as well. Britain wanted to join in also but the only possible location at that time was Brooklands. Unfortunately, noise restrictions imposed by the neighbours’ complaints meant no night racing was allowed at the Surrey track; they resorted to splitting their race, the Double Twelve, into two parts run on consecutive days.
It is not generally realised that the first 24 hour race to be run in the UK was as recent as 1980 when the Willhire event took place at Snetterton. This was a race for production cars and fifteen such events were held at the Norfolk circuit including a 25 hour race in 1989 to celebrate the 25th anniversary of the sponsor, the Willhire Vehicles Rental Company, a local car rental firm. The race’s demise was accelerated by the low level of attraction on the Group N saloons and 1994 witnessed the last of these once popular events. In 2003 a 2CV 24 Hour race was the last long–distance at Snetterton to date but the challenge of staging a full 24 hour race in Britain was taken up James Tucker’s Britcar series at Silverstone in 2005. Since then there have been seven further 24 hour races at the Northampton venue including the 2015 event. This latter was officially titled the Dunlop 24 in deference to its generous sponsor.
Here are some of the more interesting cars to tackle the round-the-clock event: 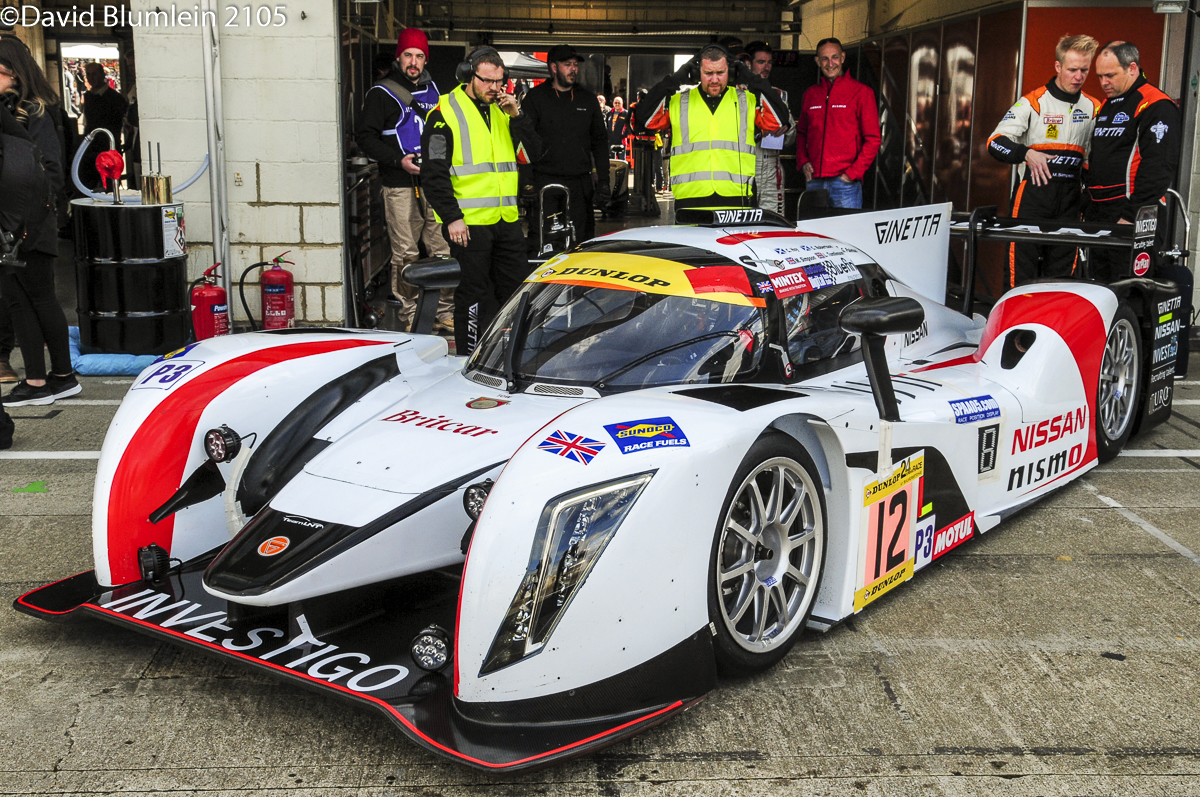 Ginetta chose to gain more experience with their new LMP3 car which had made its début at Silverstone at the recent ELMS round. It streaked away in the early laps but later suffered various problems which dropped it right down the leader board. 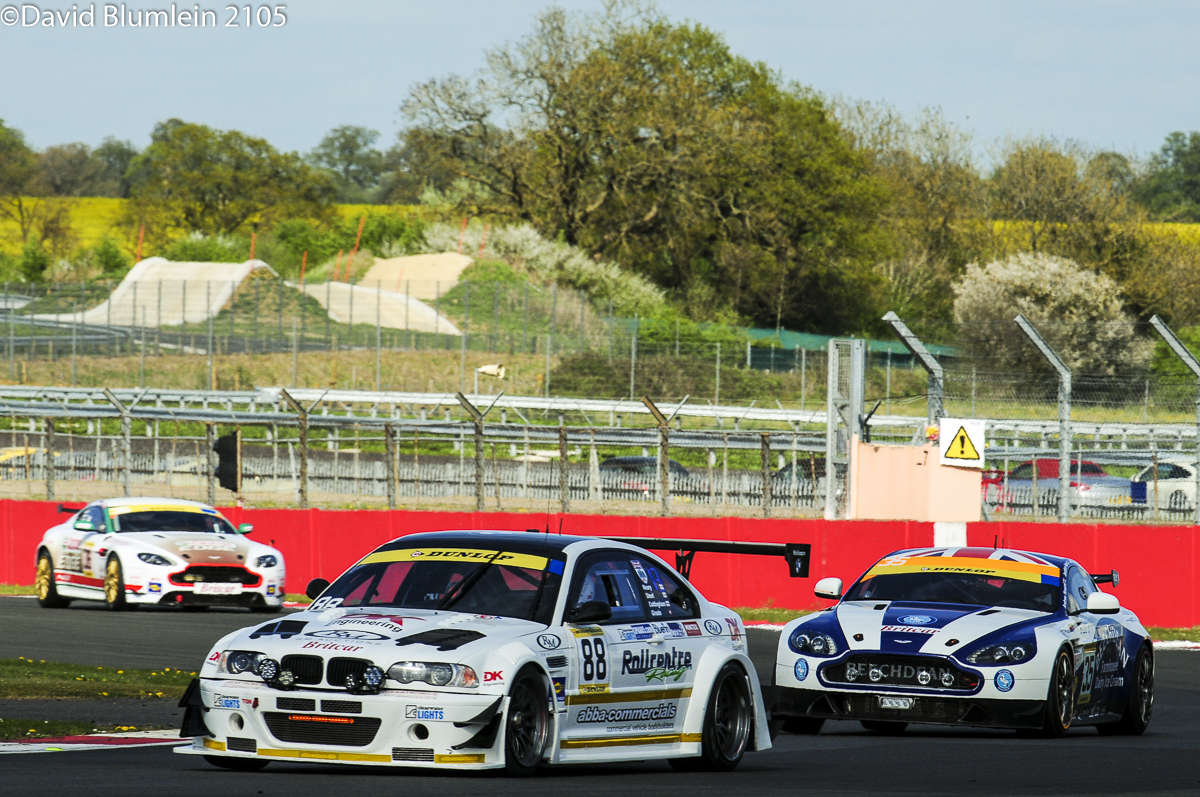 Martin Short’s RollCentre Team entered a potent BMW saloon with a 4-litre V8 engine but the car did not last long, alas! 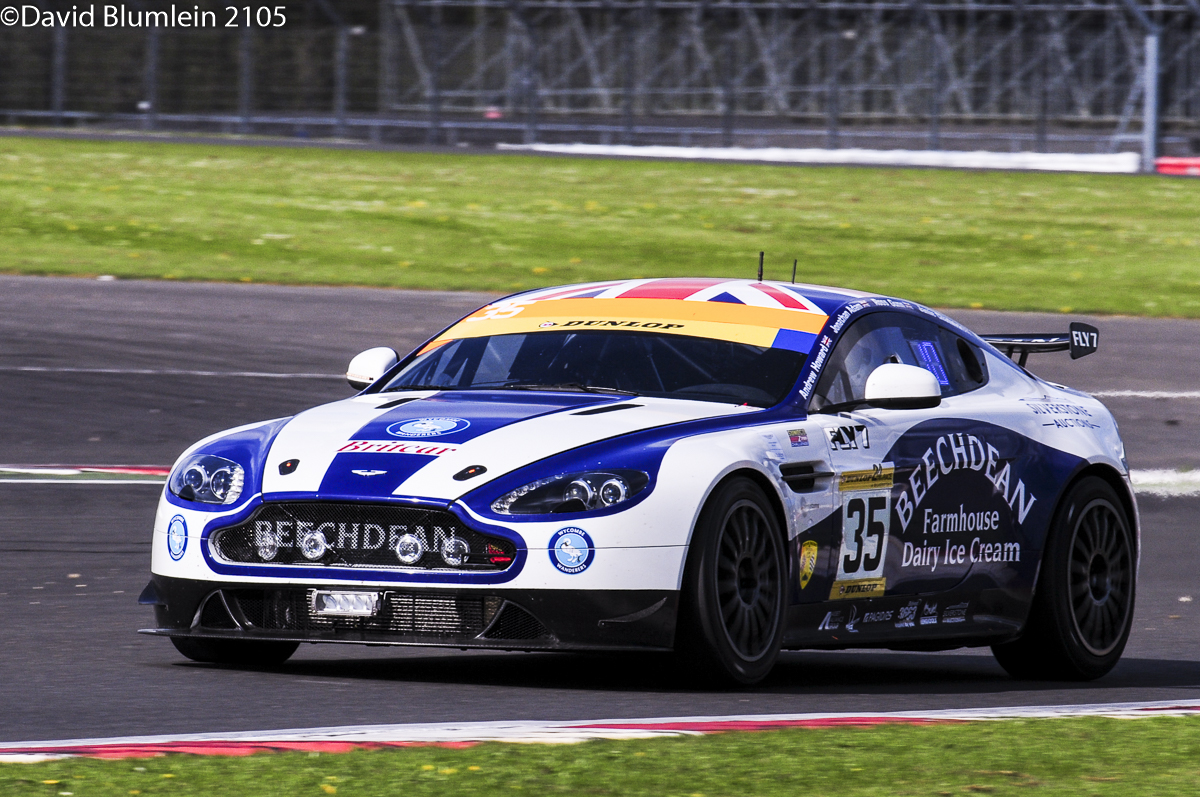 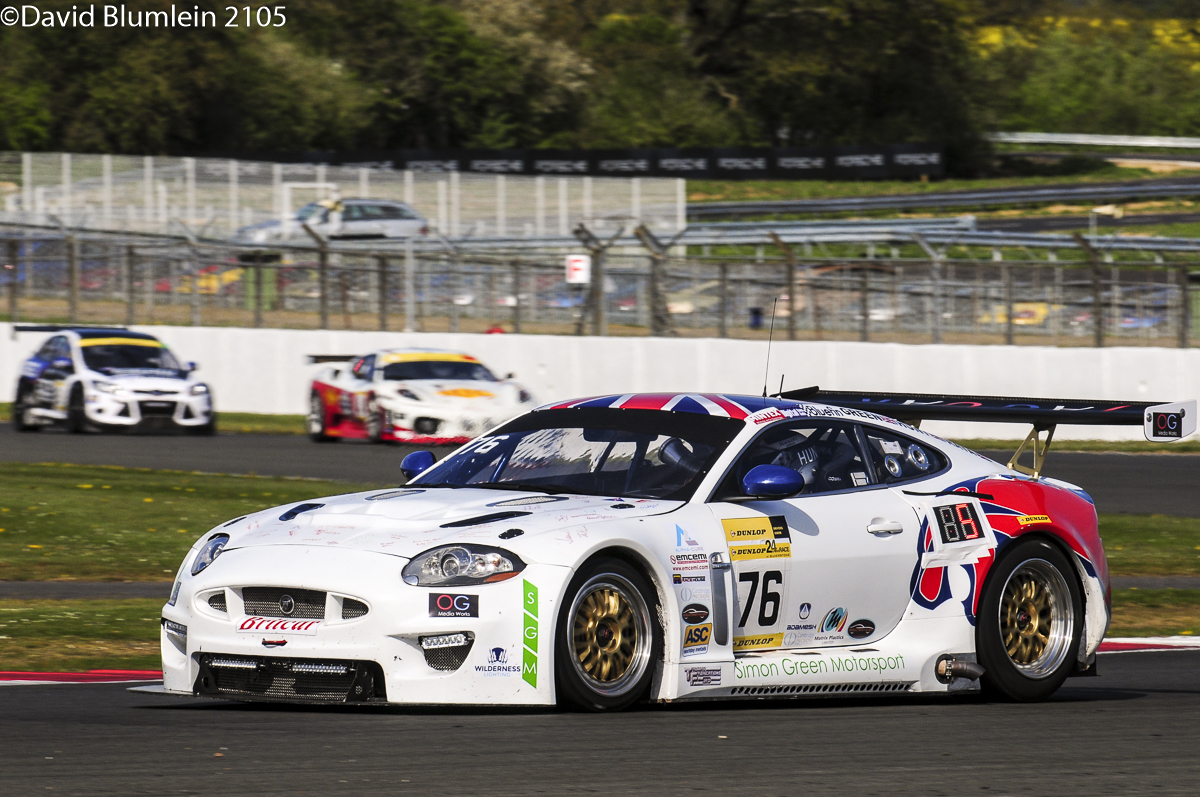 Good to see any Jaguar involved – this XKR Coupé failed to finish. 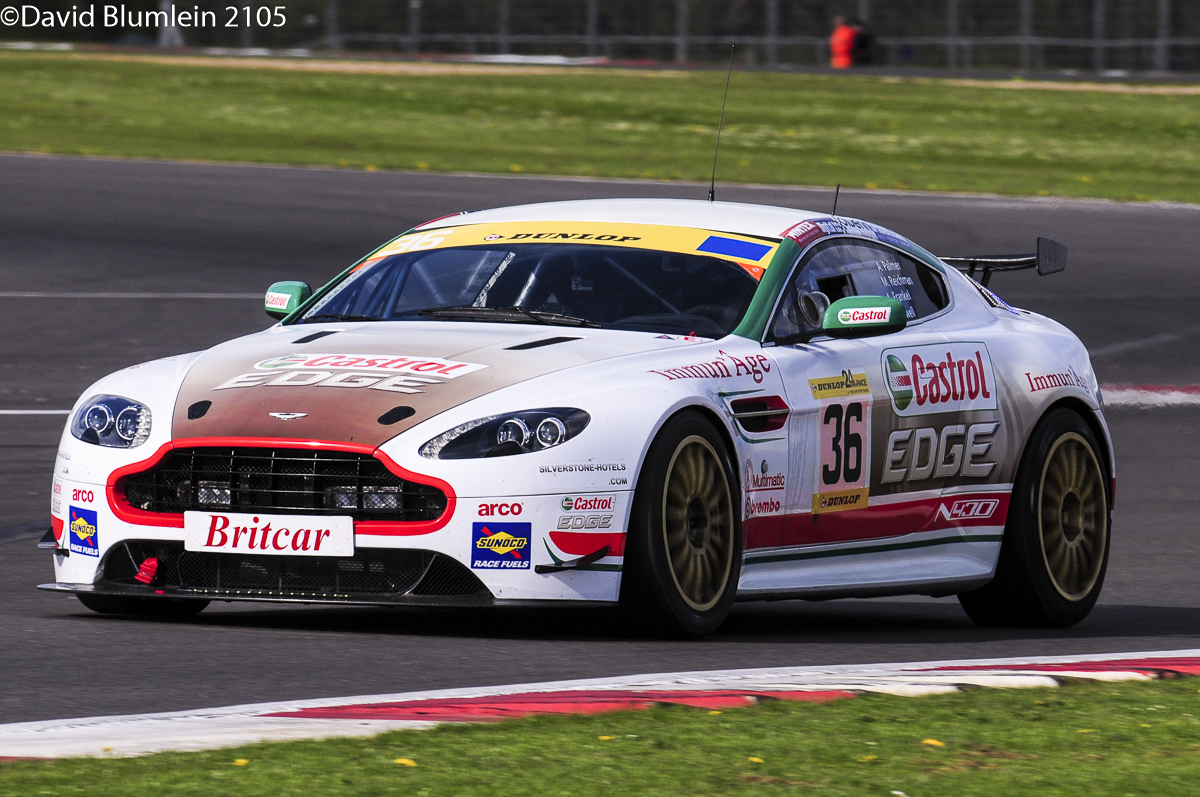 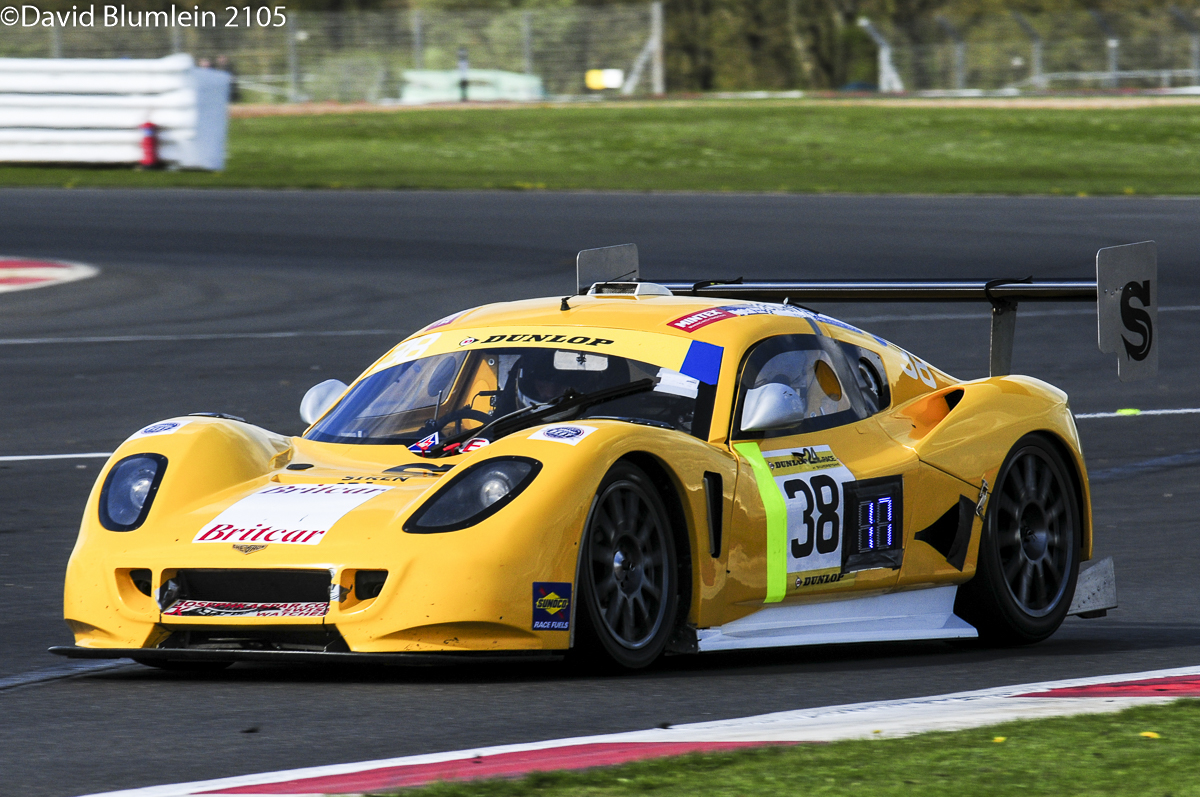 The Chevron GR8 made a welcome appearance in the race. 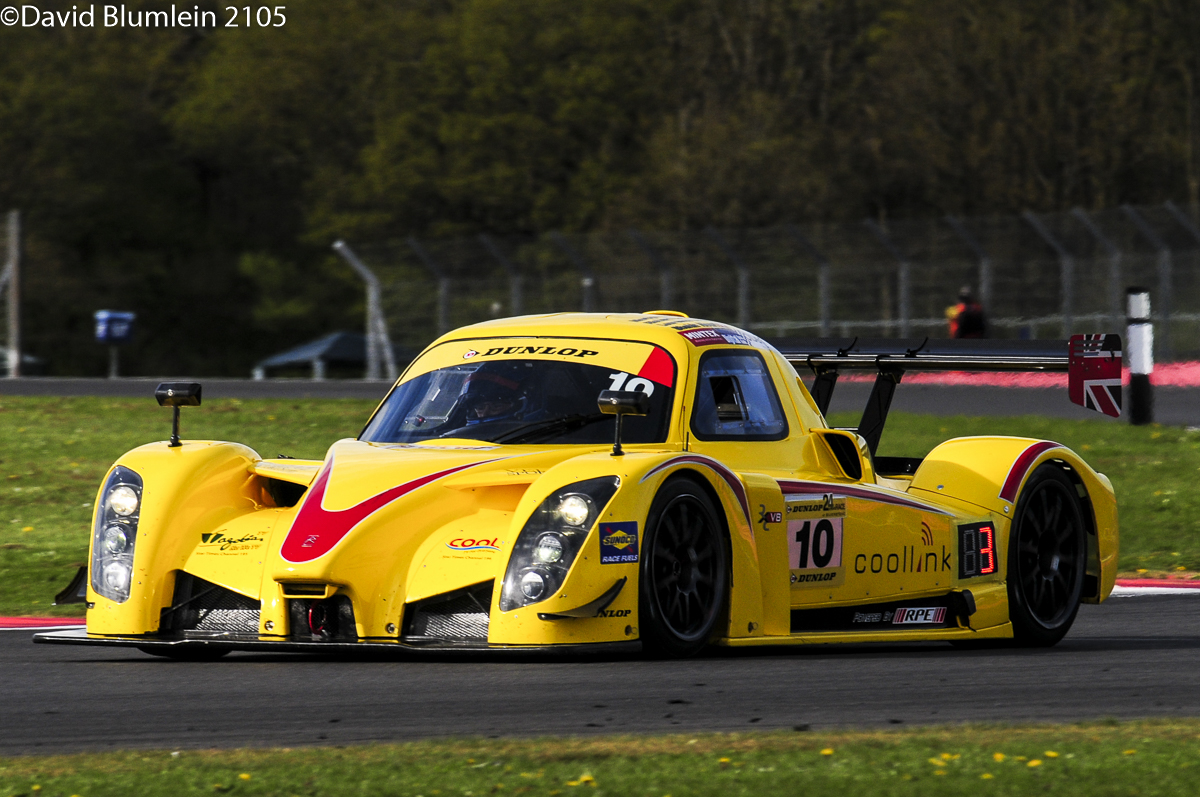 This Radical RXC is the original chassis. It has an RPE 3-litre V8 and uses a bespoke Quaife 7-speed gearbox. Despite some problems the car won its class. 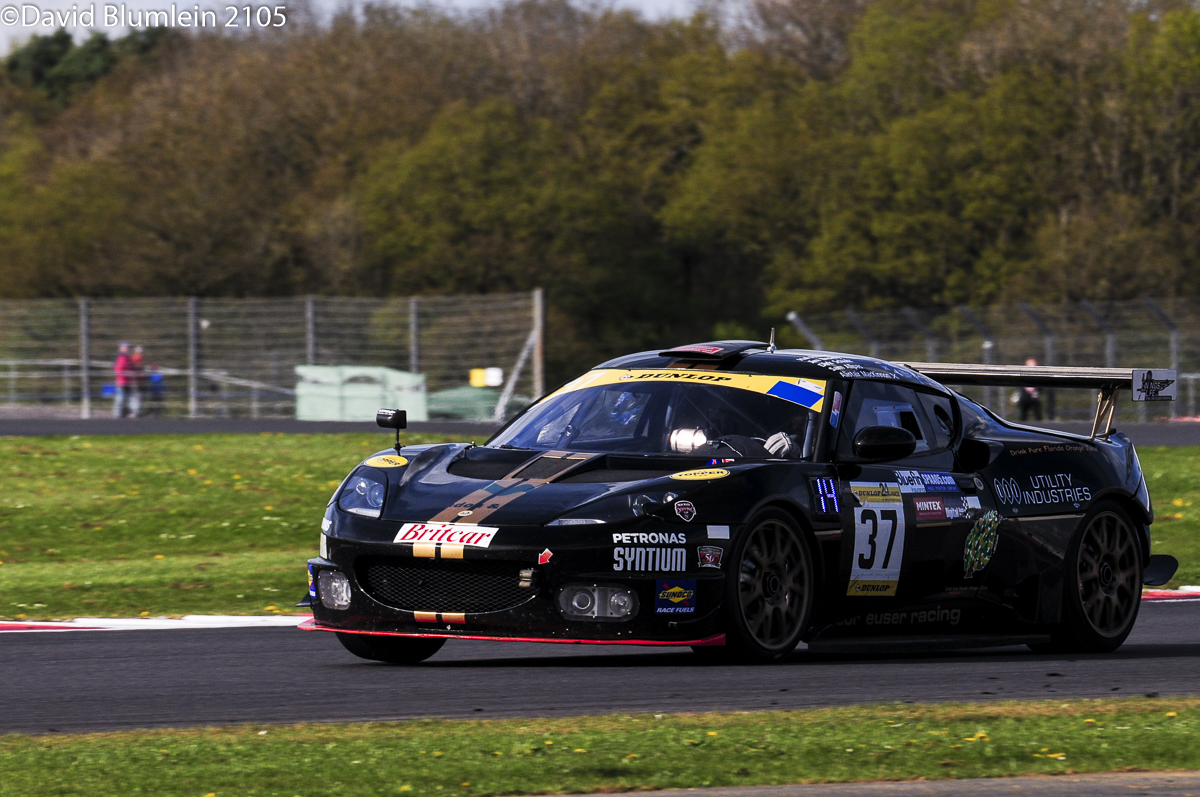 Cor Euser’s team has achieved many successes with his Lotus Evora and this time it reached the podium for its third place. 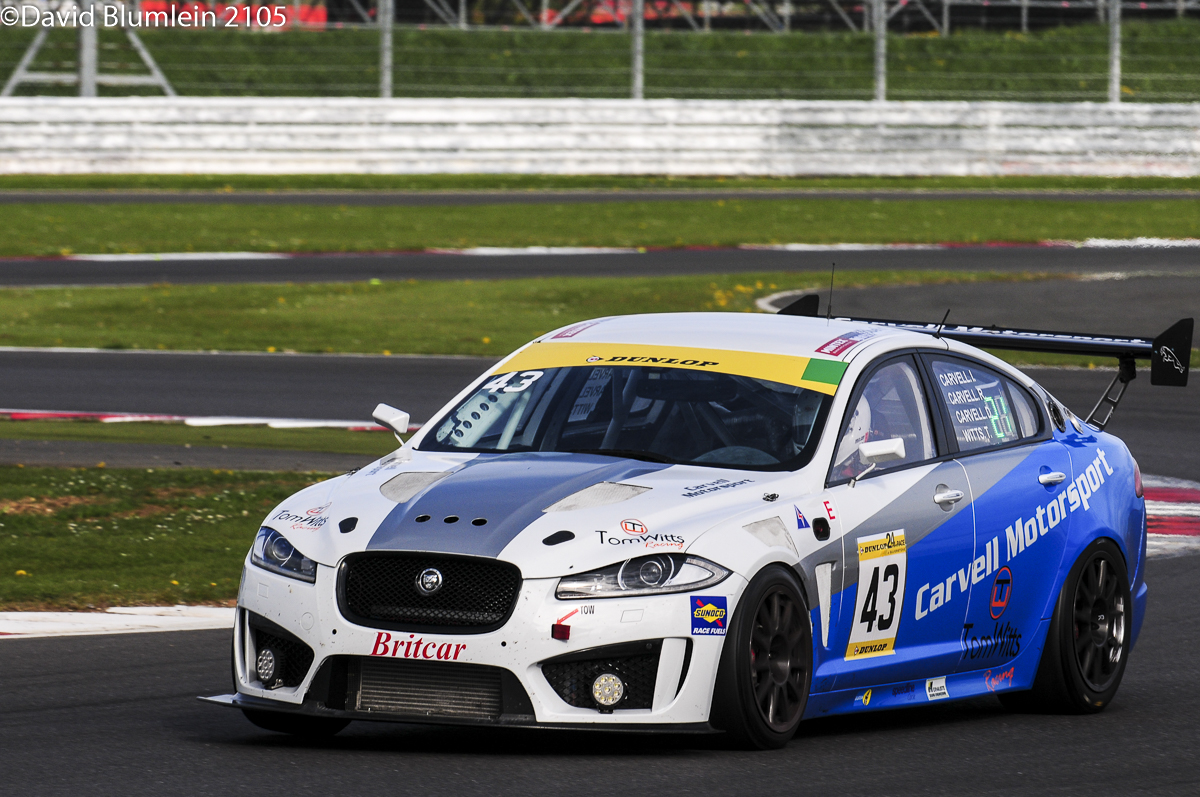 This Diesel Jaguar once won its class in the Nϋrburgring but lacked success in this race. 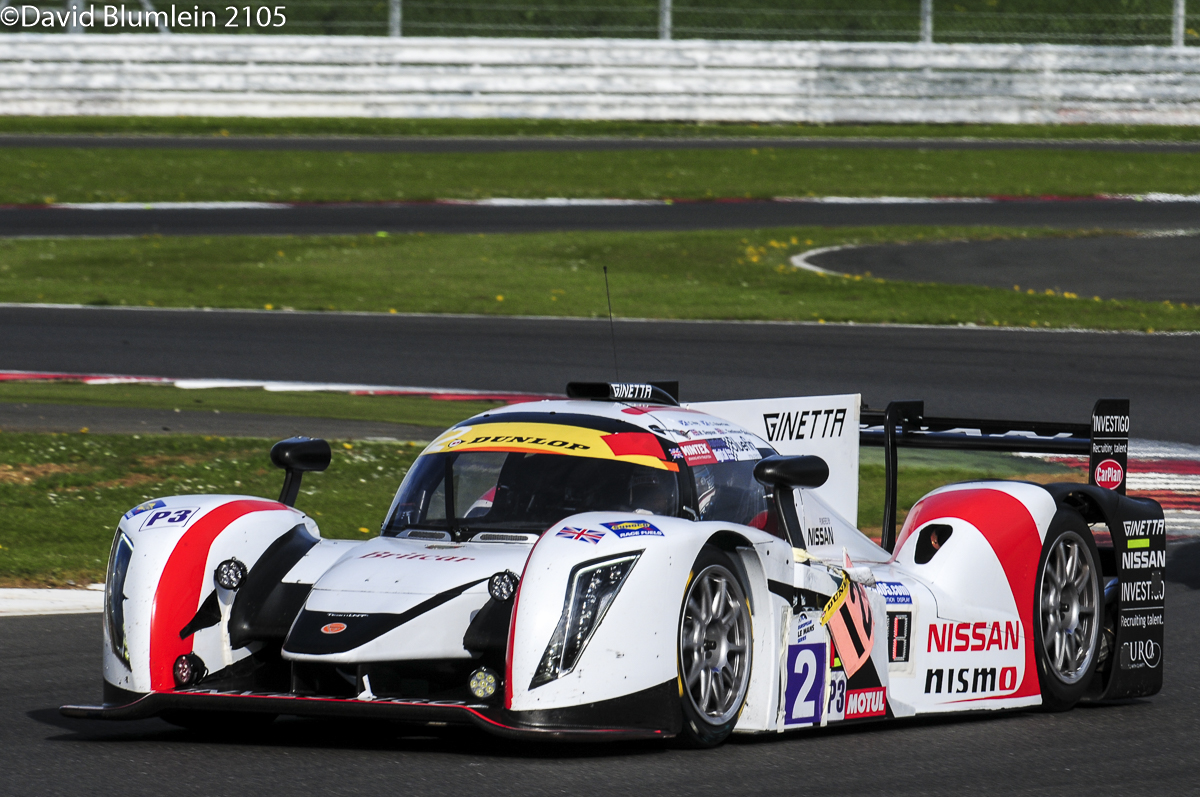 Notice the Ginetta’s number 12 coming off to reveal its ELMS number. 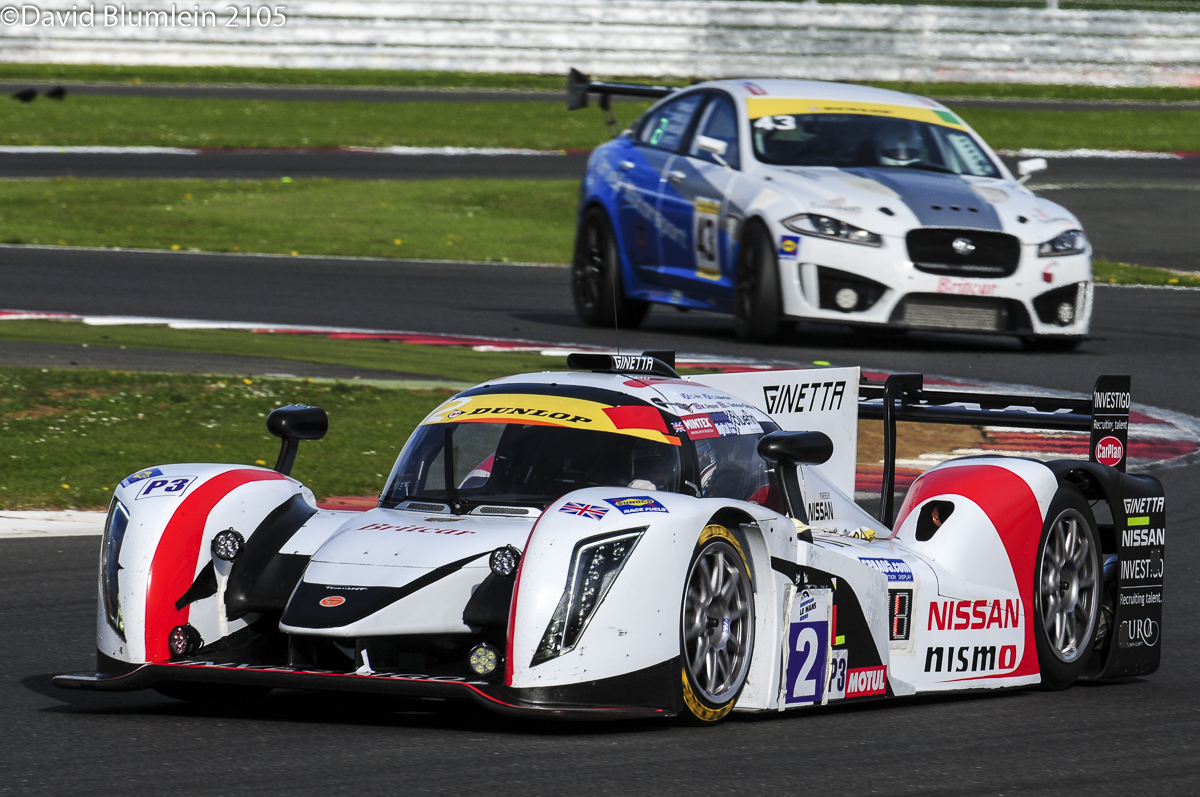 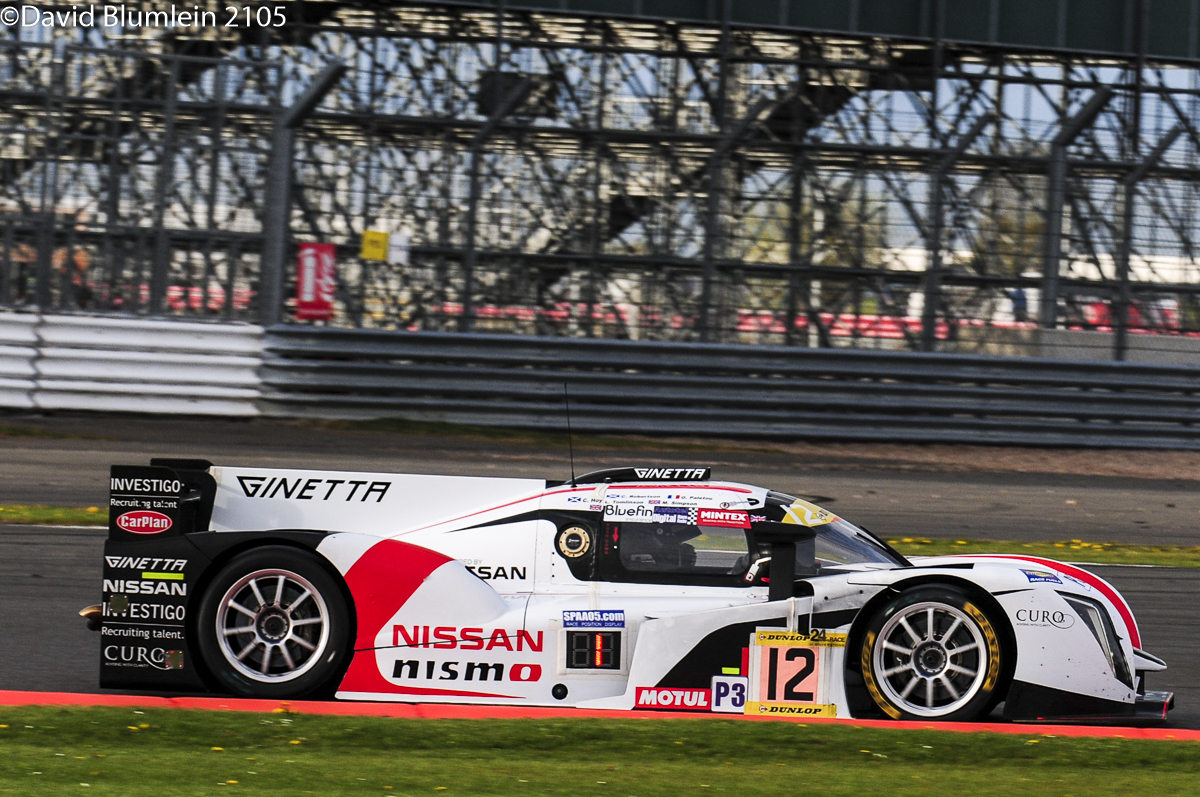 The car at Village Corner proving it is really number 12!
TAILPIECE 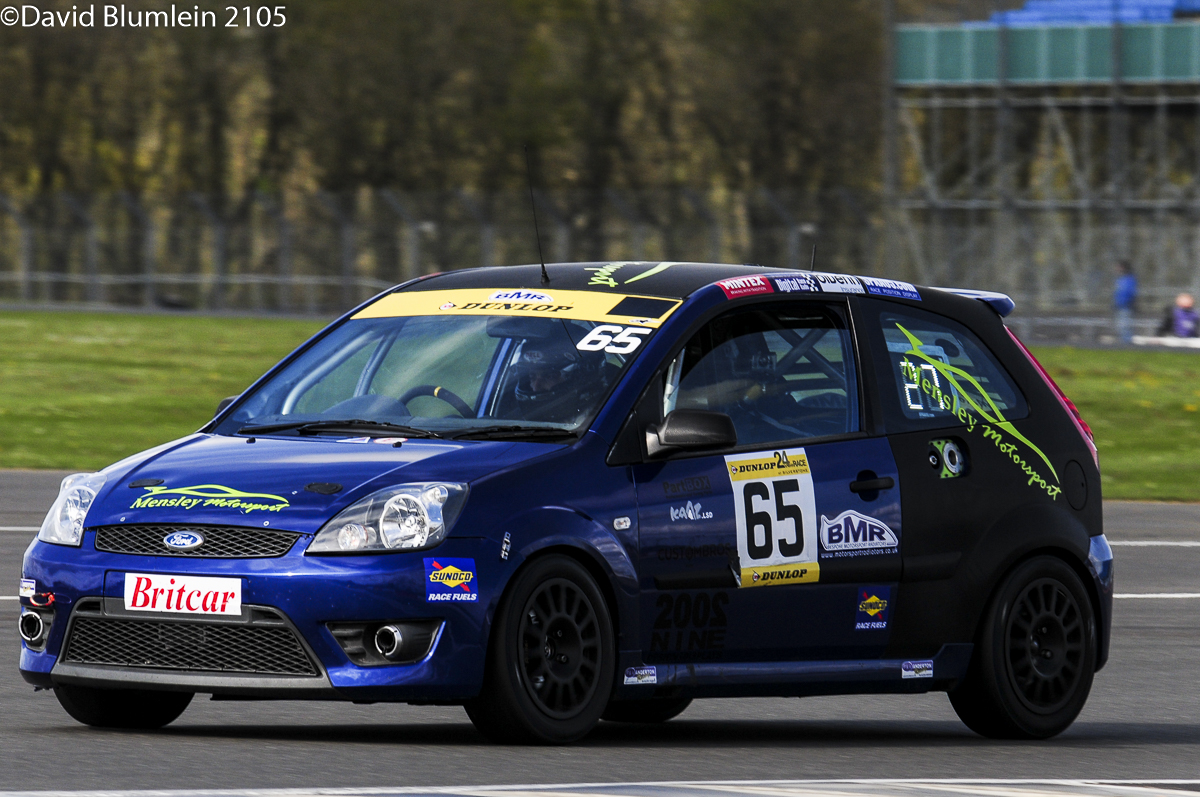 This little Ford Fiesta was the smallest car in the 24 hour field.